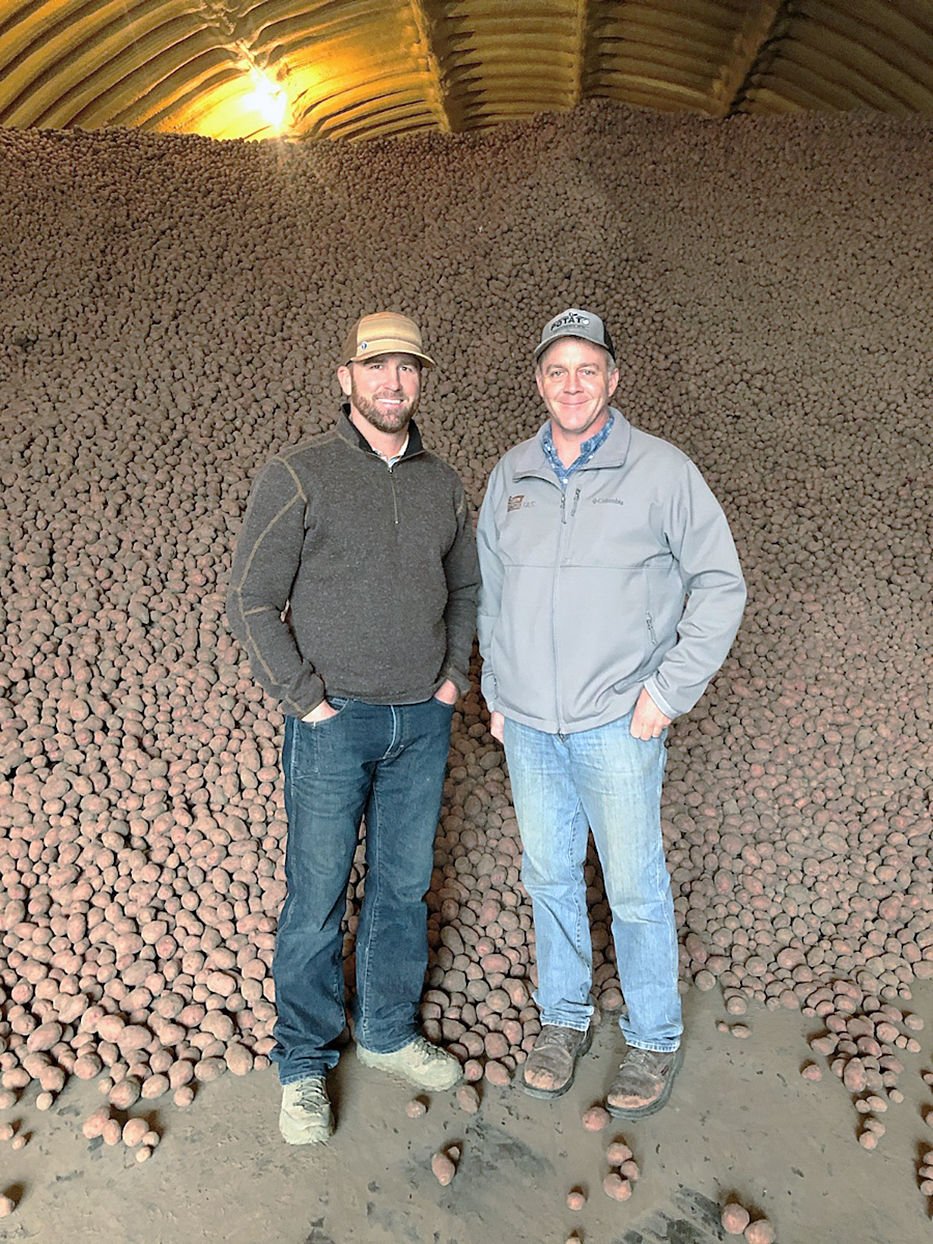 Third-generation Culver, Ore., farmers James and Mike Macy grow potato, carrot and grass seed as well as peppermint and other crops on more than 1,600 acres. 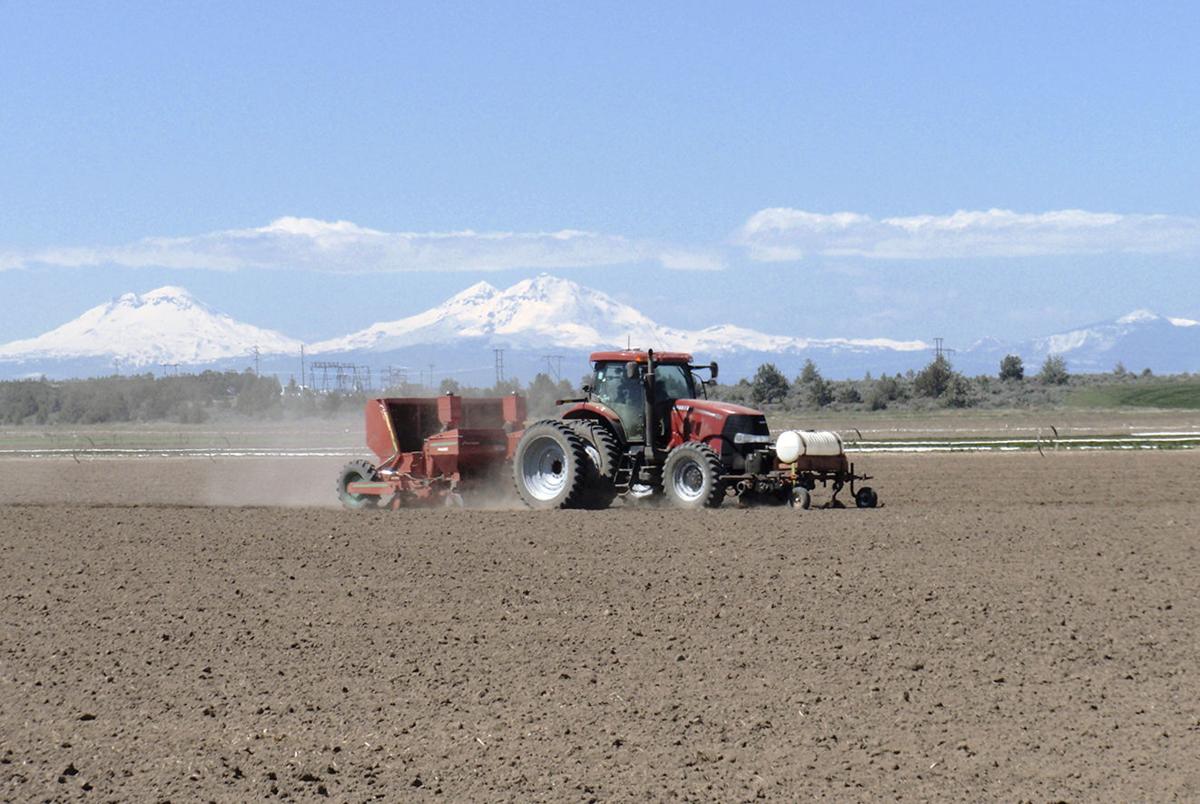 Since the 1940s, the Macy family has been farming seed potatoes and other crops near Culver, Ore., 30 miles north of Bend.

Third-generation Culver, Ore., farmers James and Mike Macy grow potato, carrot and grass seed as well as peppermint and other crops on more than 1,600 acres.

Since the 1940s, the Macy family has been farming seed potatoes and other crops near Culver, Ore., 30 miles north of Bend.

CULVER, Ore. — In 1947, young Dwight Macy, finding his family’s Idaho farm too small to support both himself and his siblings, moved across the border to Oregon.

With him, he brought his potato-farming know-how to Culver, a tiny town in Central Oregon 30 miles north of Bend. Today his descendants continue to grow potatoes for seed, among other crops.

Dwight’s sons Ed and Richard, along with their sons James and Mike, own the last of two seed potato farms left in the region, a testament to the family’s durability despite the challenges of farming in the high desert.

The new Wickiup Reservoir attracted their ancestor to the then sparsely populated area. In recent years, demand on Central Oregon’s water supply has increased with its population. Drought also takes its toll.

In the past 10 years, the Macy family farm has remained at about 1,600 acres. About 300 acres are in seed potatoes. Another 200 acres are in carrot seed, along with 120 acres of peppermint and 300 acres of Kentucky bluegrass seed. Before last year, nearly a third of the farm was also in hay and wheat.

The 2019 drought forced the Macy farm to eliminate those crops and leave nearly 600 acres fallow.

“Water is the biggest challenge,” said Mike in January. “Our reservoir this year is on pace to be the same (as last year). We’re still way behind.”

The Macys saw the writing on the wall long ago, transitioning most of their flood-irrigated property to pivot and other more efficient sprinkling or drip irrigation methods. Market changes over the past 10 years have further entrenched the Macys’ farm in specialty seed potatoes.

Ten years ago, they grew mostly Russet seed potatoes. Today, they raise creamer and chip seed potatoes; red, yellow, gold and other colored potato seed go to farms in the Northwest that harvest them small as “new” or “baby” style potatoes.

Their seed chip potatoes, after they are grown on other farms, can also be found in Tim’s Cascade, Frito Lay, Kettle and other brands of chips.

These specialty markets, unknown to them 10 years ago, have provided some predictability to the Macy operation.

“There’s more stability there than other markets,” Mike said of the chip and creamer seed potatoes. “Our contracts are signed in advance for a set amount, year after year.”

Carrot seed is also a mainstay for the Macys, as well as for other Jefferson County farmers. The county grows 45% of the world’s carrot seed — most of it around Madras and Culver, according to the Oregon State University Extension Service. The area is ideal because hybrid carrot seed grows poorly in wetter regions, where Queen Anne’s Lace and other competing relatives can ruin a crop. Those crossing relatives don’t occur in Jefferson County, but challenges — especially those that impact the pollinating bees — still impact consistency, the Macys say.

With the exception of James, who went to George Fox University in Newberg, Ore., the rest of the Macys — Ed, Richard and Mike — are Oregon State graduates. James taught school for a while in Culver but then returned to help his family on the farm when Ed retired.

“I always wanted to farm, so when the opportunity came, I came back,” James said.

“We just made it look so good,” Mike joked.

The three active owners oversee crews including six full-time employees and a handful of seasonal field crews and potato sorters.

Mike and James are both married with four teen children between them, all participating in the 4-H, FFA and sports activities of Culver High. All help on the farm in the summers.

Will they hand off the hoe to the next generation?

“We encourage our kids, but who knows? The kids enjoy the farm. Beyond that, I have no idea,” James said.