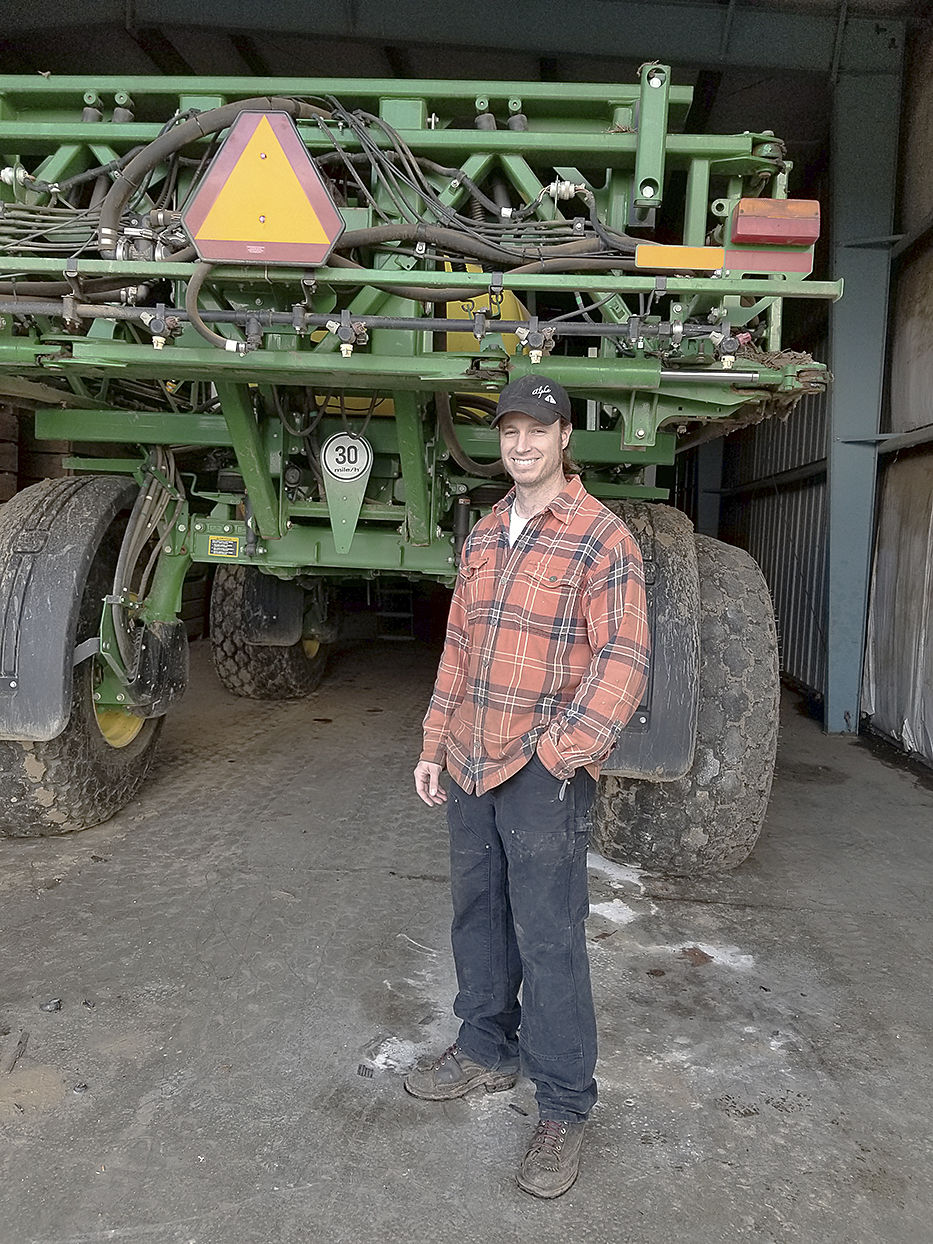 Scott Zielinski of the Windsor Island Co. checks out a high-horsepower sprayer at his family’s Salem, Ore., farm. He stresses the importance of keeping machinery in tip top condition as he manages seed and row crops on the 2,500-acre farm. 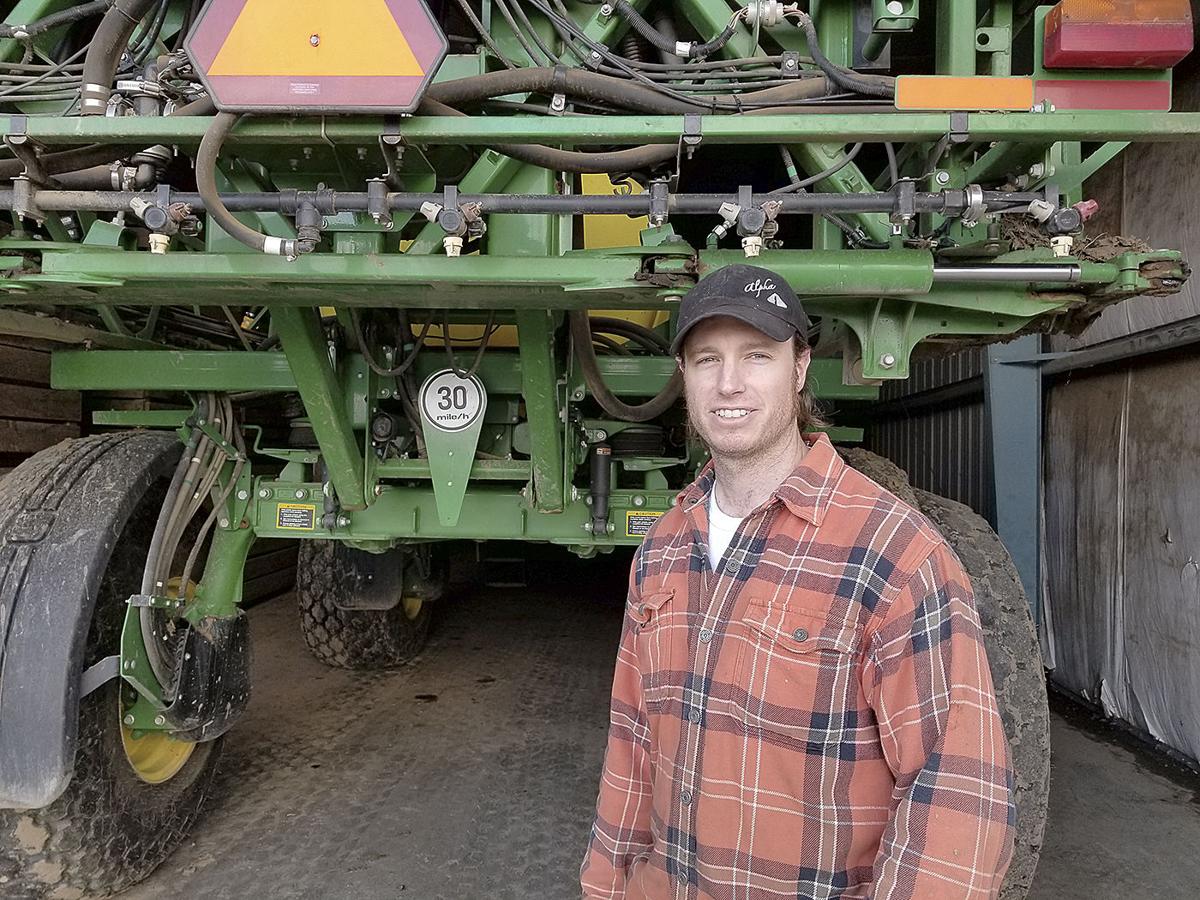 Scott Zielinski of Windsor Island Co. checks out a high-horsepower sprayer at his family’s Salem, Ore., farm. He stresses the importance of keeping machinery in tip top condition as he manages seed and row crops on the 2,500-acre farm.

Scott Zielinski of the Windsor Island Co. checks out a high-horsepower sprayer at his family’s Salem, Ore., farm. He stresses the importance of keeping machinery in tip top condition as he manages seed and row crops on the 2,500-acre farm.

Scott Zielinski of Windsor Island Co. checks out a high-horsepower sprayer at his family’s Salem, Ore., farm. He stresses the importance of keeping machinery in tip top condition as he manages seed and row crops on the 2,500-acre farm.

Scott Zielinski represents the fifth generation to work on his family’s farm, which has branched out over its decades of operation.

Seeing the 1970s trend toward the production of wheat and other staples in the Willamette Valley, Scott’s father, Douglas Zielinski, decided to try his hand at growing ornamental nursery plants near Salem, Ore.

“My dad diversified and got into the wholesale container nursery business in the late ’70s before anybody was hot and heavy on it,” Zielinski said. “People thought he was crazy, but it has proven very beneficial and both the farm operation and the nursery have grown substantially in the last 40 years.”

Today Scott’s brother, Josh, and he work together on the the family’s nursery and farming operations. Their mother, Jamie, runs the human resources department and keeps the books.

“Dad bounces back and forth between the two,” Zielinski said.

Shortly after Zielinski’s return from college to the farm full-time in 2007, some of his dad’s longtime employees began to retire.

That has meant they have been “doing a lot more work with less people and that’s been a continued trend for us, mostly by using technology and bigger-faster-stronger equipment,” Zielinski said.

His first leadership role after college was managing the shops, an entity unto itself.

“We do all the maintenance of the farm and nursery equipment,” he said.

“It is very important to keep up our equipment and we don’t rely on our vendors to come solve all our problems,” he said. “It’s a big part of our gig and it provides myself and the people I work with year-round, full-time work.”

Including the 175-acre Alpha Nursery the Zielinskis farm around 2,500 acres.

Though the largest acreage is in grass seed, the farm is best known for its abundant snap bean harvests they have produced for National Frozen Foods since the ’90s.

“We do a fair amount of sweet corn and we were doing processed onions with NORPAC before they shut down,” Zielinski said.

“My grandpa got involved in that in the ’50s and we’ve been growing them for West Coast Beet Seed Company ever since,” he said.

Zielinski enjoys trying new things and was the only grower in the Willamette Valley to successfully produce edamames, which are related to soybeans.

“NORPAC wanted to see if they could get into that market so I was kind of their guinea pig and had a great four years doing it; went from one acre to 52,” he said.

In recent history the farm has added hops, mint and 70 acres of hazelnuts.

“I didn’t really have any interest in getting into hazelnuts, but it was a way for me to make the farm more manageable,” Zielinski said. “Fortunately for us, my brother was able to raise them up in containers for a few years and they’re producing now.”

Though their sandy soil along the Willamette River tends to guzzle water, it also gives them a distinct advantage.

“It’s nice; you can get a really wet episode in the spring but we dry out quickly and you can bail the processors out by getting plantings in earlier than anyone else, so that’s kind of been our little niche,” Zielinski said. “We’ve been able to plant sweet corn as early as the 15th of April.”

While the 175-acre nursery employs 30 to 40 people, the farm is run by Zieliski and a two-man crew, adding two or three seasonal workers, something he attributes largely to well-maintained, high horsepower machinery, technological advances, carefully staggered harvests and a dedicated crew.

“They are versatile, personable guys — brothers — who can work on equipment,” Zieliski said. “It’s really been a game-changer for me.

“We prepare really well in the wintertime and in harvest we are a pretty well-oiled machine,” he said. “In the last five, six years we have had few breakdowns.”

As vice chairman of the Oregon Processed Vegetable Commission, Zieliski has a birds-eye view of the hardships snaking their way through agriculture.

“The whole NORPAC thing is just a major trickle-down effect and made it all the way down to our little commission and to research where they’re working on projects to benefit our industry.

“We can grow all this food, but all you see going in is grass seed and fiber. Where’s the food?” Zielinski said. “There are all these products available and research being done but there has to be somewhere to go with it.

“The valley produces the best snap beans in the U.S., and to us it’s more than just a rotational crop,” he added. “It’s an important crop and when things change hands and you have situations like bankruptcy it starts to get scarier whether those crops will stick around.”