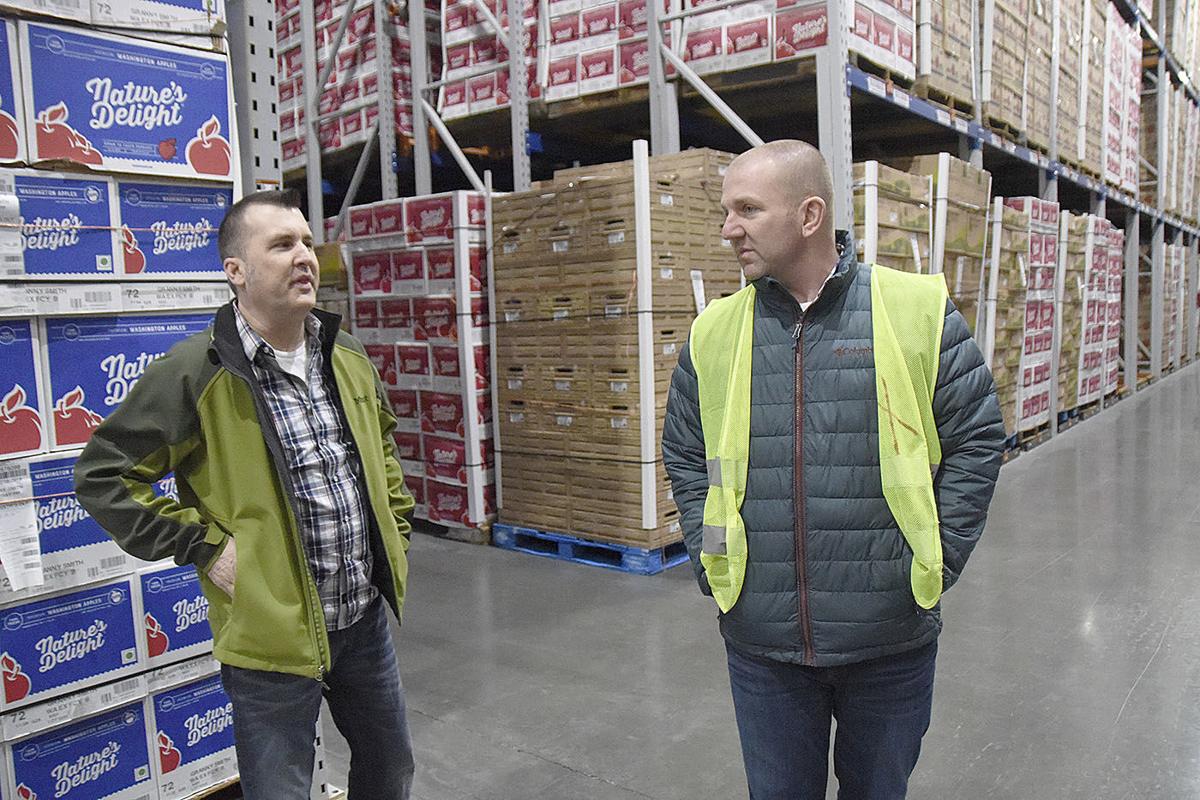 Chad Keller, left, and Chris Saunders talk about Apple King’s product variety inside one of the company’s cold storage facilities in Yakima, Wash. 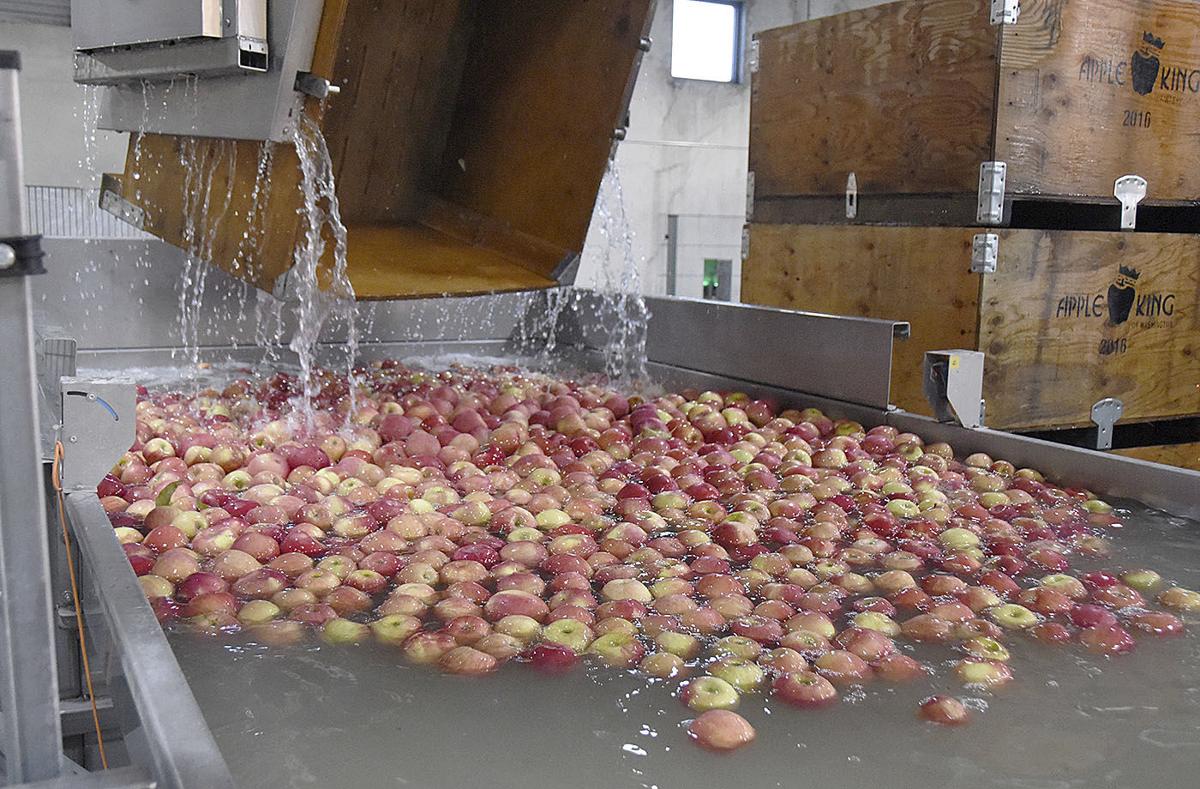 A bin of Apple King apples is dumped into a vat of water by an automated delivery system before they are sorted. 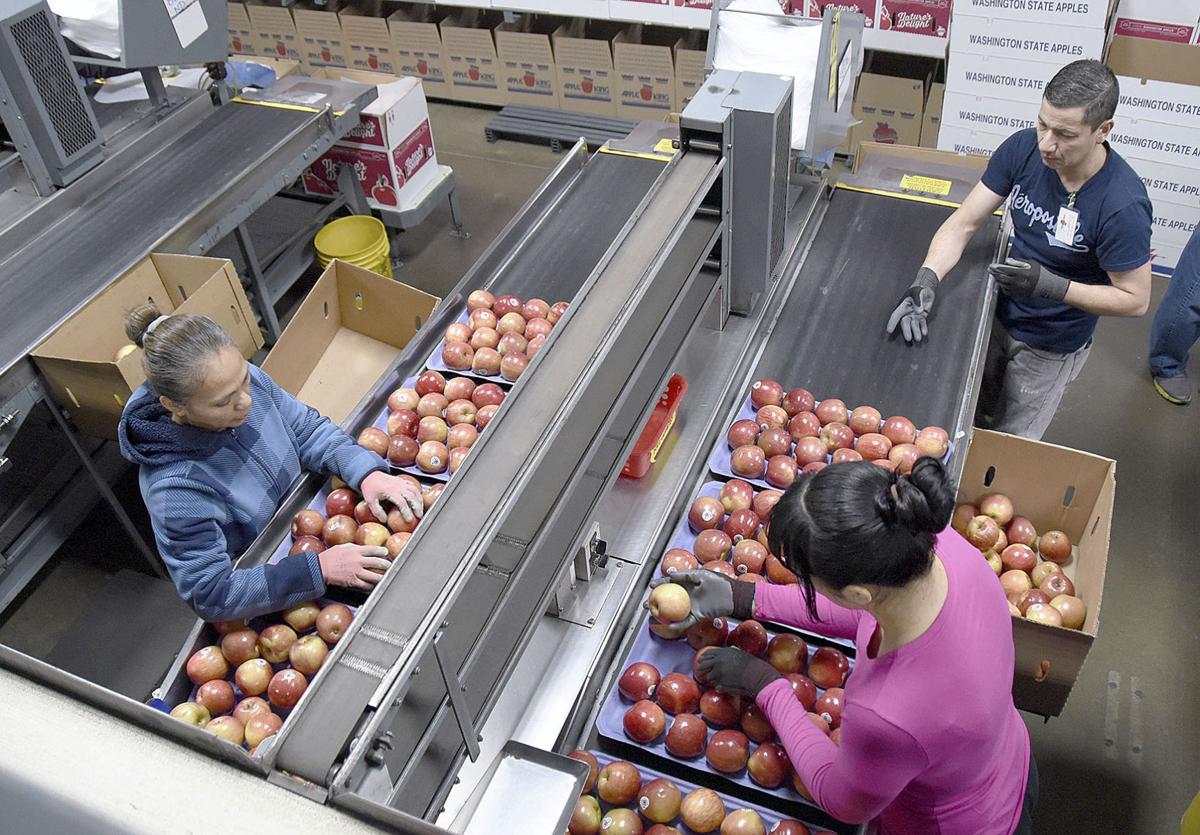 For the Capital Press at the company’s headquarters in Yakima, Wash., in late February.

Chad Keller, left, and Chris Saunders talk about Apple King’s product variety inside one of the company’s cold storage facilities in Yakima, Wash.

A bin of Apple King apples is dumped into a vat of water by an automated delivery system before they are sorted.

For the Capital Press at the company’s headquarters in Yakima, Wash., in late February.

When you operate a fruit company in the apple capital of the world, you’re always trying to find an edge. That’s why Yakima Valley grower-shippers like Apple King are constantly searching for ways to stand out in an increasingly competitive industry.

The family-owned, vertically integrated company in Yakima, Wash. — which traces its roots back to 10 acres of rented orchard land in 1914 — has been making steady improvements to its business model since the early 1950s, adding packing and storage facilities, introducing new crop varieties, and implementing cutting-edge technology.

An aggressive yet measured growth strategy has helped Apple King — formerly Keller Fruit and Cold Storage and, later, Northwestern Fruit — earn a reputation as one of the most respected apple producers in Washington state, if not the world. Today, the company employs 300 people year-round and packs nearly 3 million boxes of apples per year.

“The apple market has become pretty saturated, so you always have to keep upgrading your technology and diversifying your products,” said Mike Saunders, one of five principals at Apple King, along with Ray Keller, Chad Keller (Ray’s son), Chris Saunders (Mike’s son) and Jim Keller (Ray’s nephew). “You have to find something that sets you apart, so we’re always thinking of ways we can stay ahead of the competition.”

One of the most popular products for Apple King in recent years is the Crimson Delight apple, a registered trademark cross between a Splendour and Gala. Crimson Delights are not prone to sunburn or bitter pit, and they’re known for holding up well in cold storage over long periods.

Gala, Fuji, Granny Smith and Honeycrisp also are in high demand, while Red Delicious continues to be one of the company’s top-selling apples on the international market. Apple King fruit is sold in Asia, the Middle East, Mexico, Canada and the Caribbean, among other regions — everywhere except Europe and Russia.

“Our business depends a lot on exports around the world,” Chris Saunders said. “People will send us pictures of our apples overseas, and it’s interesting to see how far our fruit actually travels.”

The company’s newest variety is the Lemonade apple out of New Zealand. Apple King will begin selling the tangy-sweet, yellow-hued apple this spring and will soon become the first U.S. grower to produce its own Lemonade harvest.

“We built a relationship with their United States marketer and we agreed to give it a try,” Mike Saunders said. “They’re really different (apples), and we hope to plant 200 acres of them over the next couple of years.”

The company also has been growing organics for about 10 years, but a diverse product line isn’t all that has helped Apple King achieve elite status in the industry.

Perhaps the most important change Apple King has made is the implementation of a new warehouse management system.

“Now, all of our fruit is in the same location and we can digitally map to where every pallet is,” Chad Keller said. “It’s a lot more convenient, but we have also found that it makes the loading process more efficient.”

A lot has changed since Ray Keller and Mike Saunders got into the business in the 1960s. But two things have remained constant at Apple King and its predecessors: a commitment to quality fruit and quality people.

“Back when we started, everything was done by people, but now it’s a lot more automated,” said Ray Keller, who represents the company’s third generation. “Even with all of the changes, you still need good people to be successful. We’ve been fortunate to have a lot of loyal employees work here over the years, and we’re very proud of them.”