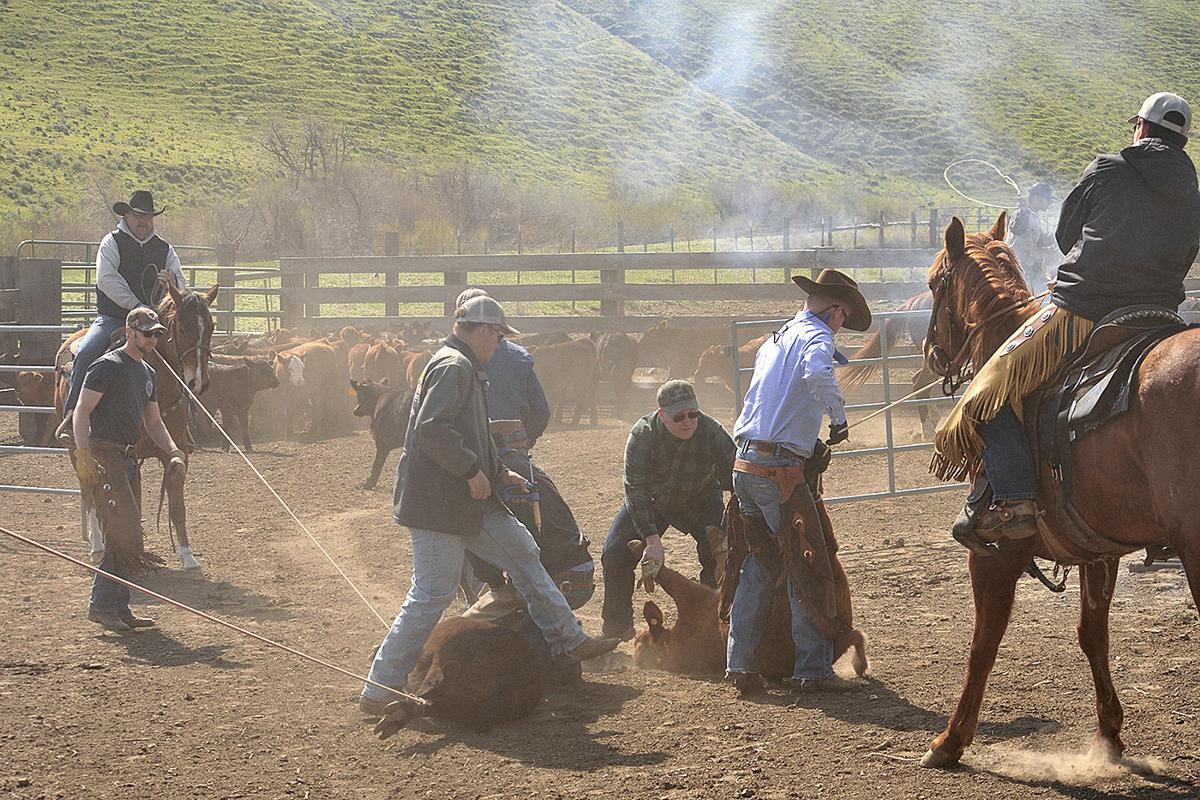 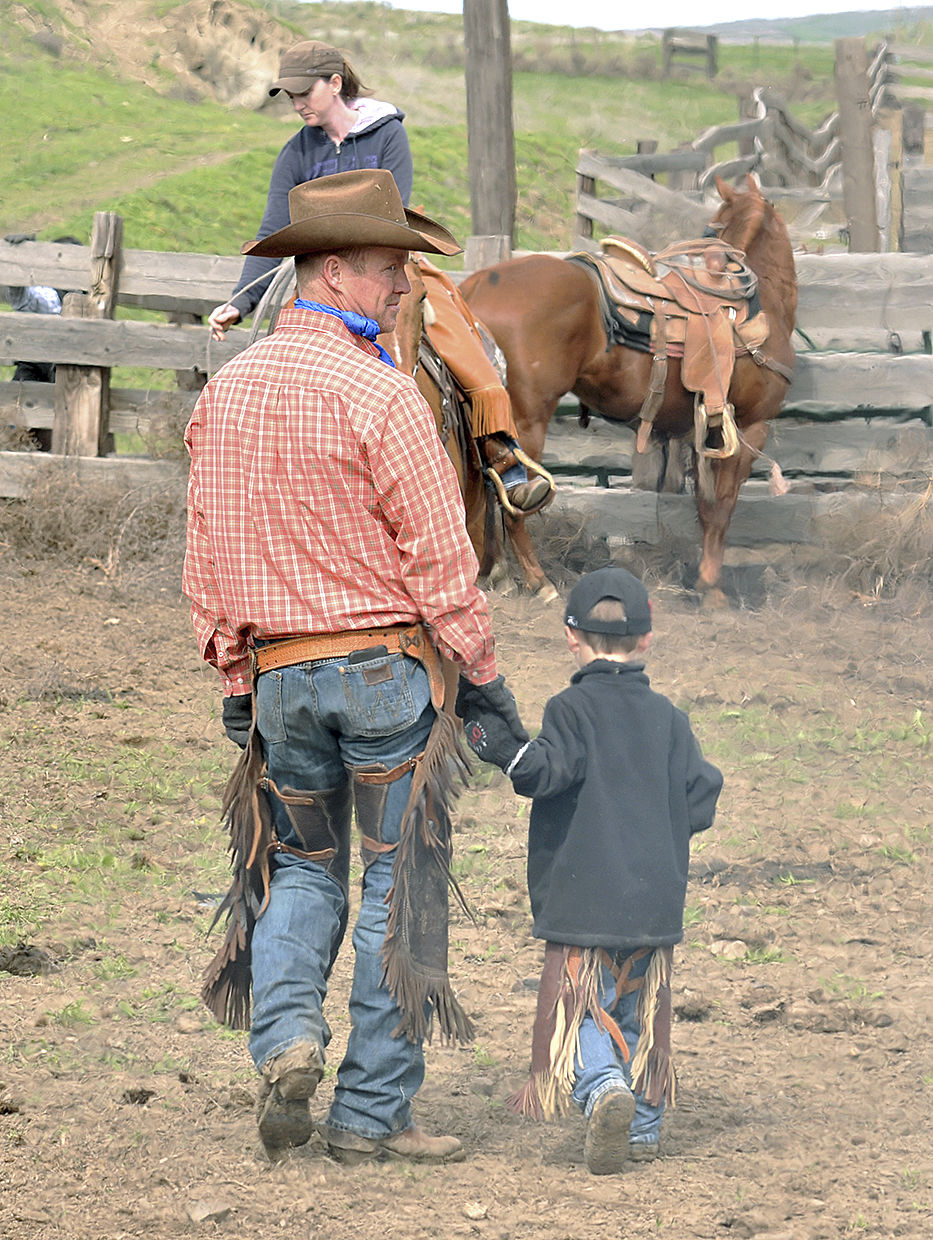 They met when Dykes purchased Red Angus cattle 27 years ago at Leachman Cattle Company. When Leachman’s dispersed in 2003, Seth continued to manage some of the Red Angus top production sales, and marketing bulls for Dykes.

“I solicited Seth when I acquired the historic 9 Mile Ranch at Touchet, Wash., 5 years ago,” Dykes said. “The ranch is 16,000 deeded acres of native grass that provides winter and spring range. We acquired an additional 38,000 acres for summer grazing on the middle fork of the John Day River and added 3 ranches at Joseph, Ore.”

The cattle run on the western slopes of the Blue Mountains from October until June. They calve and breed on native grass with little or no feed inputs. In early June they are trucked to summer grass higher on those mountains, to graze until mid-October. Cows are wintered at the 400-foot elevation and summer as high as 7,500 feet. This means mild winters, and good summer grass.

“We run purebred cattle in large range pastures. They sometimes travel 5 miles to water, just like many of the large commercial herds in this area. We’re doing this with purebred registered calves, composites and hybrids. They all go through the same system our commercial cows do,” Dykes said.

The operation runs 800 to 1,000 registered Red Angus and Red Angus-Simmental hybrids. The plan is to eventually produce some three-breed composite bulls.

These cows are on grass year-round. “We feed very little hay most winters and calve in January/February out on the range,” he said. Cattle work is done on horseback.

“We use all the tools of our industry such as genomics, EPDs, DNA testing, performance testing, ultrasound, feed efficiency testing, but the environment dictates what our cattle will be. Parentage of each calf is determined by DNA,” Dykes said.

Leachman says the cattle have to be sound, with good feet and structure, able to rebreed, and have a live calf. “Those factors are most important; EPDs and science don’t always identify these traits. We are with the cattle daily and can identify the superior cattle. We can see what works and what doesn’t,” he said.

Dykes says that when their customers turn their bulls out they hold up nicely because of the way they were raised. “We are commercial cattlemen, purebred breeders, and we feed cattle.”

They feed out their own all-natural steers and heifers, and buy calves from their customers.

They feed cattle in Colorado and Kansas, and get all the data back.

“This influences our breeding decisions. We are among very few purebred programs in the U.S. that run this many cows and also feed cattle. We use all the selection tools available — but also put cattle into an environment where we can identify any with bad feet, poor structure, et cetera, and eliminate them from our program,” Dykes said.

They’ve acquired some of the best bulls in the industry and try to find the best genetics that will work in this environment, and then multiply them via artificial insemination and embryo transfer (ET).

“Anyone can utilize the top AI bulls, so we differentiate ourselves with the cow,” says Leachman. They have acquired elite females, mass producing them through ET work.

“We like the Red Angus-Simmental cross and we like composites. Our cattle are about 90% red, with a few black bulls available as well,” he said.

“The team we’ve assembled (Seth, myself and our families) is great, with help from Brad and Karen Gleason. Brad is head cowman/herdsman,” said Dykes.

Brad and Karen were operating 9 Mile Ranch when Dykes bought it. Their extensive knowledge of the country and commitment to raising good cattle has been a great benefit, he said.

The cattle that come out of this program do well. “Very few purebred breeders turn their AI and ET calves out on a mountain with cougars and wolves. Our commitment is to make sure that a 9 Mile Ranch-raised bull can thrive in the real world.”

Commentary: 5 reasons to read this book to your children