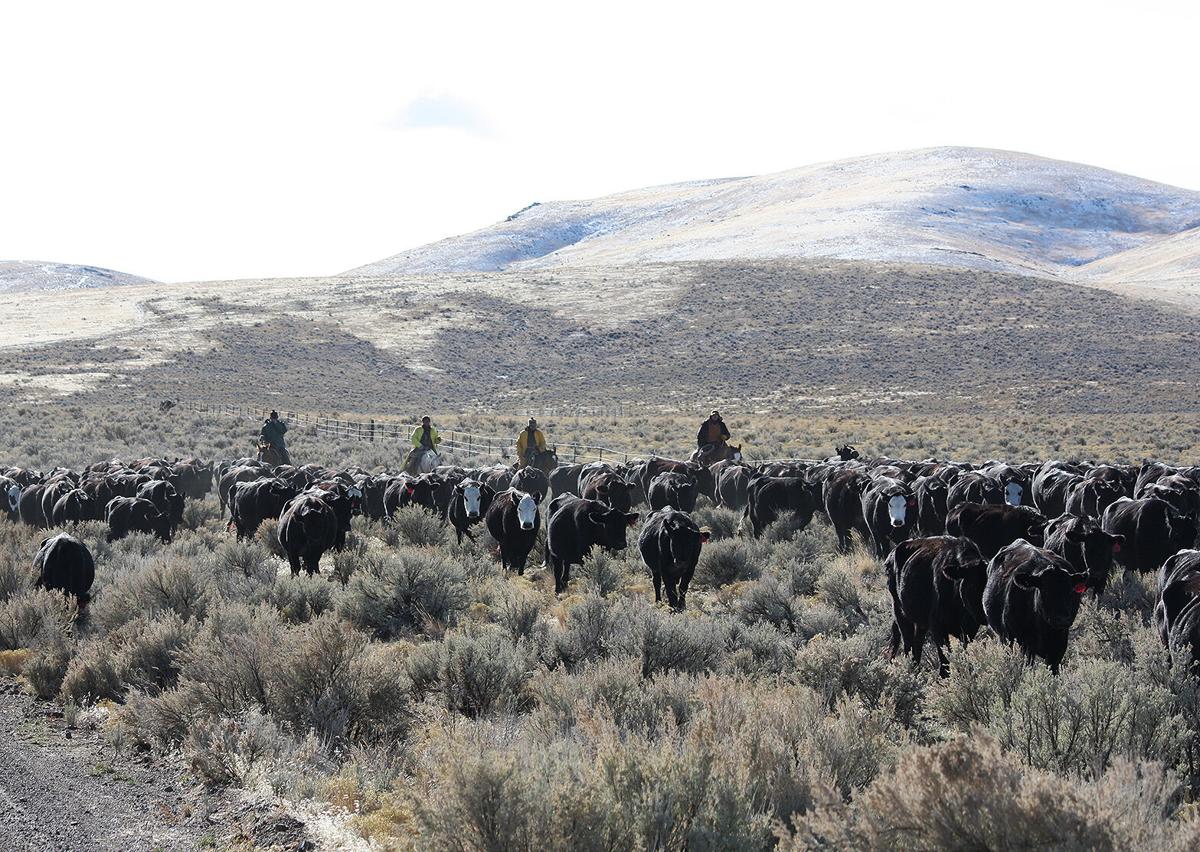 HOMEDALE, Idaho — Cattle at Burgess Angus Ranch have the advantage of a high mountain summer range and low-elevation winter quarters where the weather is mild.

They summer at 5,000 feet near Jordan Valley, Ore., and spend winters at Homedale, Idaho.

Doug and Janice Burgess have been producing commercial cattle for more than 45 years, and registered Angus for 25 years. They both grew up in Northern California.

They looked for another ranch and in 1979 bought a place on Cow Creek in Jordan Valley. They had an Oregon Bureau of Land Management permit on the west side of Highway 95 and an Idaho BLM permit, and ran commercial cows and raised hay.

Then in 1995 they bought some registered Angus cows to raise their own bulls.

“We hadn’t been able to find bulls that fit the country or that we could afford,” he said. “We sold a few bulls to our neighbor (the 06 Ranch) in 1996 and now they’ve bought more than 100 bulls from us.”

Most of the bulls sold by the Burgess Angus Ranch go to ranchers within 200 miles. The bulls are acclimated to the area and sire efficient cows that work well in range country.

“We try to raise cattle that fit this environment and periodic drought. It’s good country, and good people, but you can’t do well with extreme cattle,” Doug said.

Large-framed cattle that need a lot of feed or cows that milk heavily can’t handle the environment, he said.

After more than 20 years on Cow Creek, they looked for additional land and in 2001 bought a place at Homedale at a lower elevation.

“We needed to expand, and a better winter place. The Cow Creek ranch is nearly 5,000 feet elevation, and down here is about 2,300. This makes a lot of difference in climate,” Doug said.

The Homedale ranch is only 40 miles away — close enough to trail cattle back and forth — and now has more than 800 acres.

They are installing their seventh pivot to raise hay and corn silage for the calves. They sell two loads of commercial calves each year by Superior video auction, and have been doing that 20-plus years.

The calves go to branded programs.

“We are GAP 4 certified (Global Animal Partnership) and wean calves for 60-plus days. They go to natural programs — Whole Foods, the Niman Ranch program or Country Natural Beef,” he said.

“We now run 200 commercial cows and 200 registered cows. The purebreds are run like commercial cows. We have separate breeding pastures, but use multiple sires, and DNA test the calves to determine parentage,” he said.

All first-calf heifers, both commercial and registered, are bred AI.

“We also AI half the purebred cows,” Doug said. “We have a fall-calving herd and a spring-calving herd of purebreds.”

Fall-born bulls are more than a year old when sold, ready to go to work that next spring.

The sale is held at the ranch the first week in February, selling 70 to 80 bulls. The calving barn is temporarily converted into a sale barn. Everything inside the barn is portable so they just move panels out.

“Everything we have today has been paid for with cow dollars, so we have a different philosophy than many purebred breeders; we make do, and make things work, because we have to,” he said.

He and Janice have put together enough deeded ground that hopefully they can survive if they lose some BLM permits to a proposed national monument.

They have four daughters, 11 grandchildren and four great-grandchildren. The sale is a family affair. They all pitch in and help.

“We don’t have any hired help. Our family does it all,” he said.