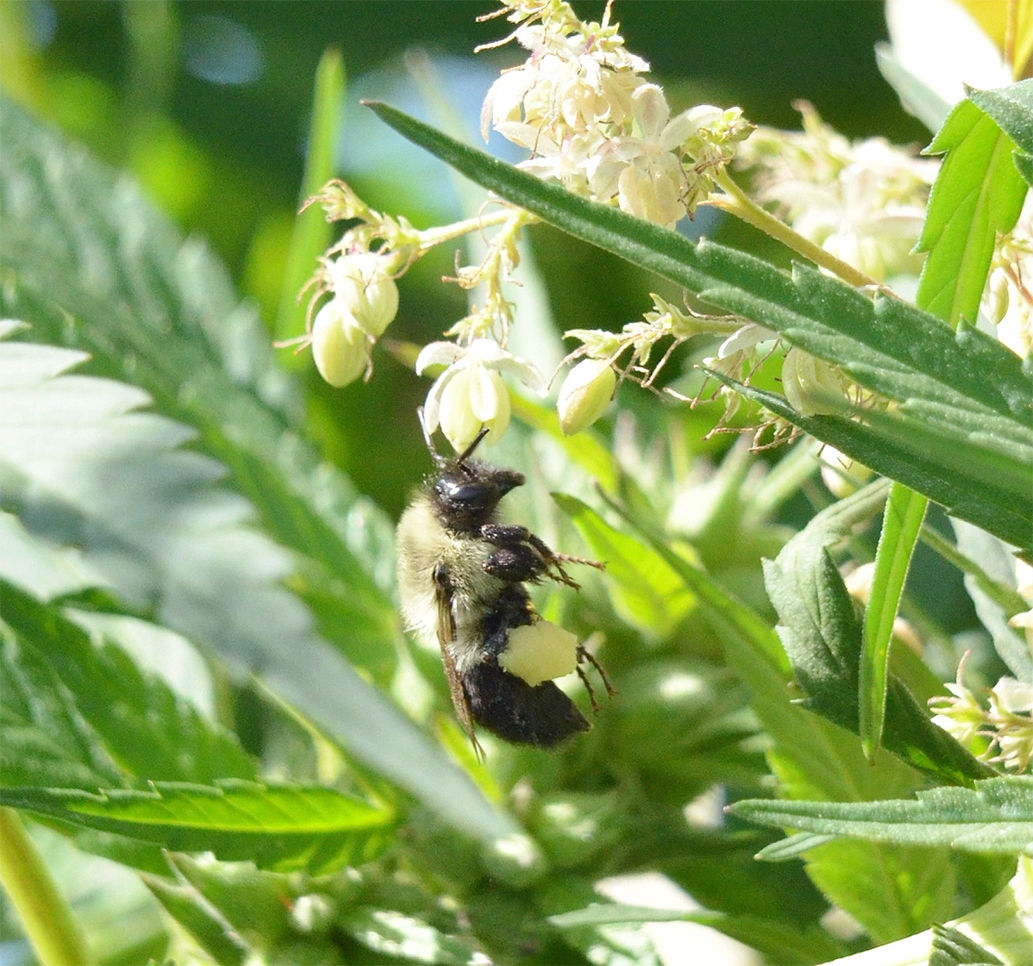 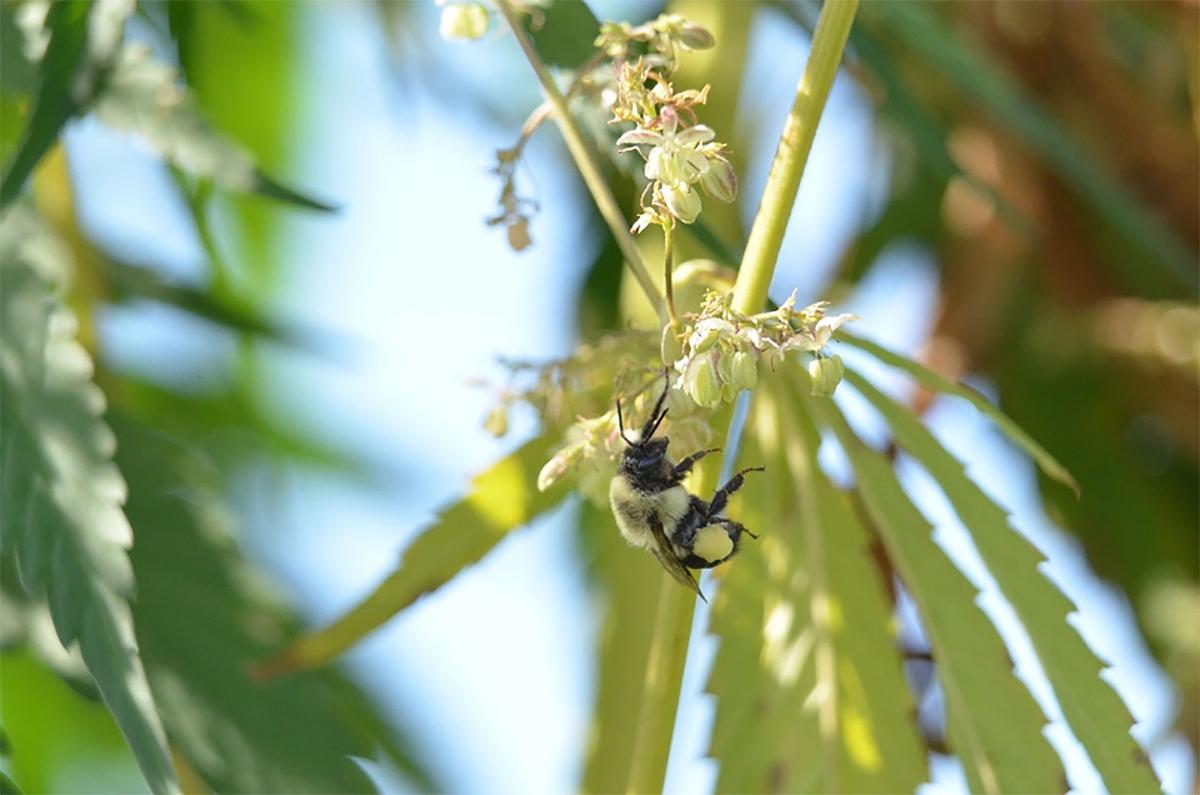 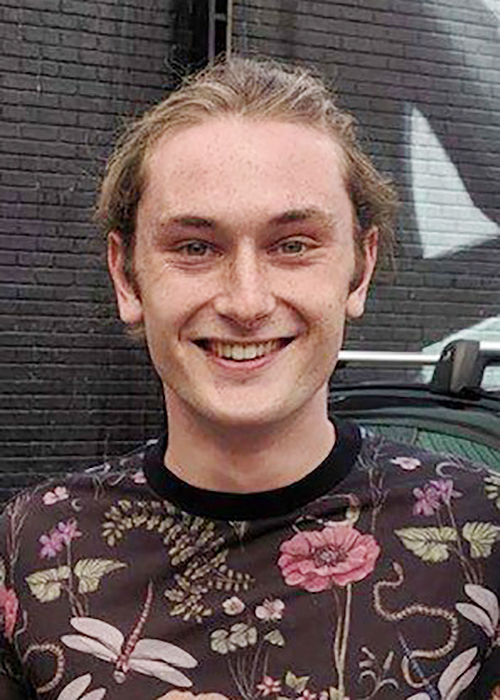 Exactly why pollinators are attracted to hemp isn’t entirely understood, but at least one thing is clear: it’s not because they’re getting high.

Not only does hemp contain minuscule amounts of THC, the psychoactive compound in cannabis, but insect brains don’t have the receptors affected by the substance.

In fact, pollinators take little interest in the female cannabis flower, which is cultivated for THC in marijuana and cannabidiol, or CBD, in hemp.

Their lack of enthusiasm for female hemp flowers is due to the absence of nectar, which pollinators need for carbohydrates.

Male hemp flowers, on the other hand, contain an abundance of pollen — an important source of nutrition for the insects.

“Pollen is their main source of protein and fat,” Grab said.

Scientists have documented that pollinators are drawn to hemp fields that contain both males and females, even though it’s a wind-pollinated plant that doesn’t need insects for breeding.

It’s also a crop that was long missing from the U.S. agricultural landscape before nationwide restrictions were relaxed by the 2014 and 2018 farm bills.

“It’s not something that pollinators are used to foraging on,” said Arathi Seshadri, a USDA bee researcher who previously studied pollinators and hemp at Colorado State University.

This finding that hemp is nonetheless appealing to pollinators has consequential implications for managing the newly popular crop.

For one, farmers must avoid harming pollinators in their hemp fields when treating them for pests.

Growers should look into using predatory insects and other “integrated pest management” strategies that use biological control methods, Seshadri said.

“We should keep in mind there are bees foraging on hemp, so it would make sense to do IPM right from the start,” she said.

Hemp may also act as a nutritional bridge during a time of scarce pollen, improving habitat for pollinators that are needed in other crops.

Whether the pollen from hemp is more or less healthful than that from other plants would require further study, though.

Grab co-authored a study, “The Bee Community of Cannabis Sativa and Corresponding Effects of Landscape Composition.” It found 16 species of pollinators collecting pollen in mixed-sex hemp fields grown for oilseed and fiber.

Honeybees represented about 60% of the total 355 captured insects, while bumblebees comprised about 30%. Tall hemp plants tended to attract the most pollinators, as did fields in landscapes with a lot of plant diversity.

While at Colorado State University, Seshadri co-authored a similar study, “Bee Diversity and Abundance on Flowers of Industrial Hemp,” which found more than 2,200 individual insects from 23 genera of bees and several other pollinator types.

Since they don’t contain nectar, female flowers grown for CBD aren’t likely to be pollinated by insects and face a greater risk from wind, which is the primary mode of transportation for hemp pollen, Grab said.

Farmers who produce hemp for CBD try to avoid seeds in the crop because they reduce the compound’s quality and quantity.

However, fiber and oilseed hemp crops may play an important role in maintaining year-round pollinator colonies, which often face a dearth of blooms after spring but before autumn.

Hemp typically releases pollen in August and September, when pollinators need a food source between seasons.

“Summer is a key period when there are not a ton of floral resources available,” Grab said.

The affinity that pollinators have for hemp became readily apparent to Nathan Flicker, who co-authored the Cornell study and now works at the University of Pennsylvania’s Morris Arboretum.

Flicker said he was single-handedly able to catch about 50 bees during a 20-minute period in hemp, which would normally require four people in other crops.

Hemp seemed to be more attractive to pollinators than the more noticeable flowers of strawberries and tomatoes he’d also studied, Flicker said. That’s especially remarkable since it’s a wind-pollinated crop without showy flowers.

“I still remember that day, I was astounded,” he said. “You don’t really see bees swarming corn fields as much as what I had seen.”