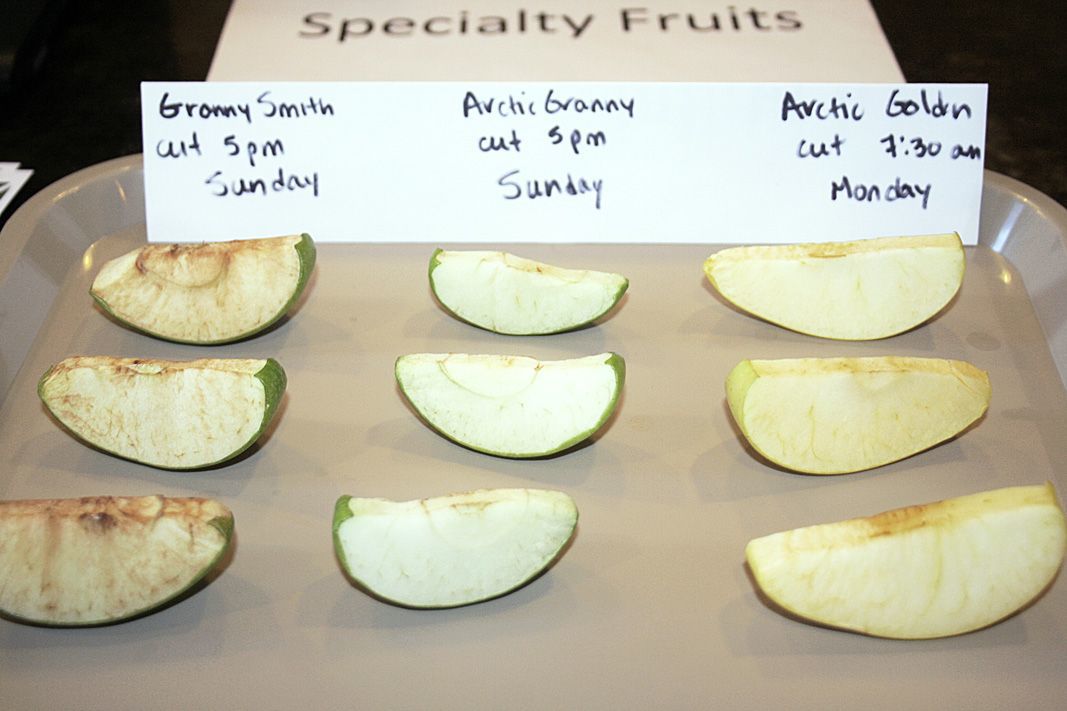 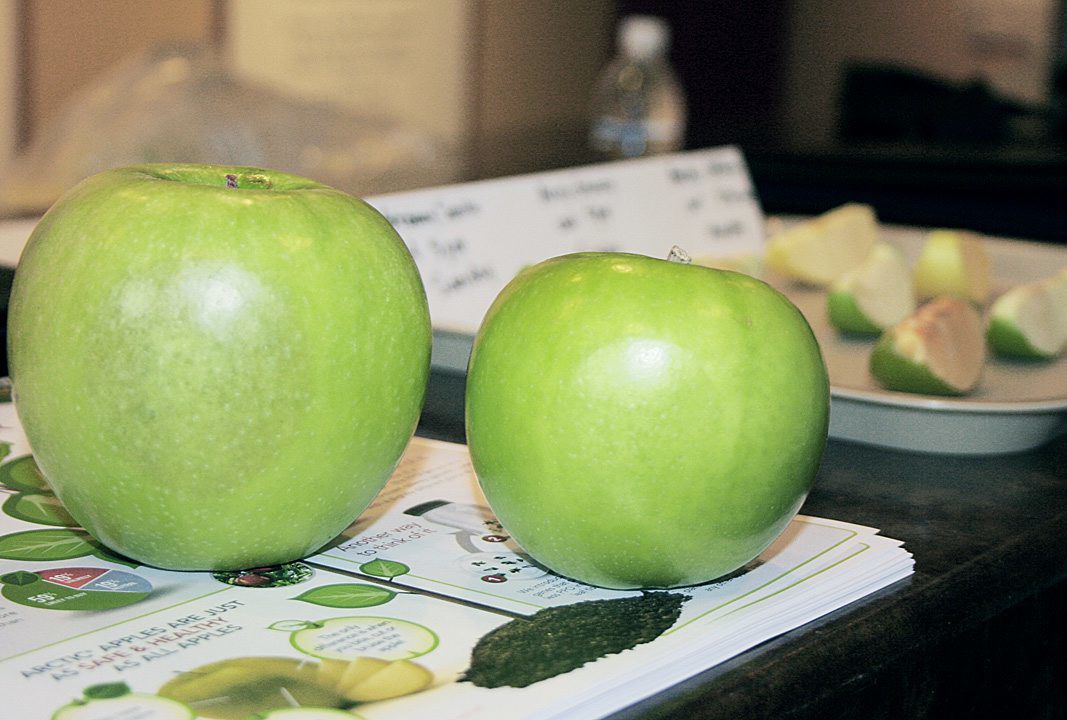 Dan Wheat/Capital Press A regular Granny Smith apple, left, and an Arctic Granny, right, were both bruised by striking them on a counter a few hours earlier. Flesh under the regular apple's skin will brown and decay more quickly.

Dan Wheat/Capital Press A regular Granny Smith apple, left, and an Arctic Granny, right, were both bruised by striking them on a counter a few hours earlier. Flesh under the regular apple's skin will brown and decay more quickly.

The apple has long been a symbol of nutrition and health. The multi-billion-dollar apple industry has worked hard to polish that image, so most of its members have balked at the prospect of a genetically modified apple entering the marketplace.

Neal Carter, president of Okanagan Specialty Fruits Inc., expects early next year to receive government approval for production and sales of his Arctic-brand Golden Delicious and Granny Smith apples in the U.S. and Canada. The apples have been engineered to “silence” a gene that causes browning when they are sliced. Carter, who is based in Summerland, B.C., believes it could reduce costs and increase sales in the sliced-apple snack business. In turn, he says it could also boost overall apple consumption, which has been flat for decades.

But the U.S. apple industry opposes his request for USDA approval, not out of opposition to genetic engineering but out of fear it could cause apple sales to decline.

“In my mind the industry is not opposed to the science. It’s the financial risk of introducing the GMO apple into the largest producer of apples in the U.S. (Washington state) that is our concern,” said Todd Fryhover, president of the Washington Apple Commission in Wenatchee.

The farmgate value of the 2012 U.S. apple crop was $4 billion to $4.3 billion, excluding packing, shipping and processing, with about three-fourths of that coming from Washington, according to the U.S. Apple Association.

The big unknown, industry leaders say, is how many people would quit buying apples because they’re concerned about genetic engineering. Though no health risks have been associated with it, genetic engineering has become a hot button issue among some consumers who fear there may be undiscovered risks. Public awareness increased this year when GMO wheat was found in Oregon, leading to Japan’s decision to briefly stop some of its U.S. wheat purchases. The debate was also ramped up by GMO food labeling initiatives that failed in California and Washington and may be headed for the ballot in Oregon.

Has all of this made the apple industry more leery than ever about GMO apples? Washington tree fruit company executives don’t appear eager to talk about it. Asked that question via voice mail and email, the presidents of three major companies and one smaller one did not respond.

West Mathison, president of the largest company, Stemilt Growers Inc., Wenatchee, said only that his company is not involved in GMO apples and has no plans to start.

“This is just another variety with probably more of a negative stigma than any other,” he said.

The industry is exceedingly cautious, said Randy Smith, a Cashmere, Wash., grower and past chairman of several industry organizations.

“We have to provide quality fruit and assurance to the consumer that our product is safe and healthy. Not to say GMO isn’t. But if the public is concerned, we have to be concerned,” Smith said. “The market has to be willing to accept them before we move forward.”

A member of the audience at the Washington State Horticultural Association annual meeting, Dec. 2, asked a panel on apple varieties to comment on the Arctic apple. One panelist, Washington Sate University apple breeder Kate Evans, noted genetic modification is not breeding. While much could be gained from genetic modification, it’s a big step to take and consumers are wary, she said.

“I think we will all take interest in watching consumer acceptance. That’s all I can say,” said Jeff Cleveringa, association board president. Three other panelists did not comment.

Carter believes biotechnology is needed to help agriculture meet an ever-expanding global food demand. He also believes non-browning and other GMO apples could increase apple consumption and returns to growers.

Education, he said, is the key to reaching people concerned about GMOs.

“It’s surprising how little they need to know before they say it’s not so bad,” he said.

Growers are interested in the benefits of reducing their environmental footprint and production costs, but are cautious, he said.

“They are concerned about consumer attitude. We like to say there’s a big line-up to go second,” Carter said, adding industry opposition is softening because of his transparency.

“It’s only an apple where we turned off one enzyme,” he said. “It’s a great product. When people see it they will realize that.”

He envisions demand starting with East Coast fruit stands looking for novelty items and small, fresh-slice companies recognizing the competitive advantage of saving the cost of traditional treatments of Vitamin C and calcium to prevent browning.

Tony Freytag, senior vice president of Crunch Pak in Cashmere, the largest producer of sliced apples, said that company has no intention of using Arctic apples.

The owner of a Yakima fruit company who Carter said favors the GMO apple declined to comment.

But John Rice, co-owner of Rice Fruit Co., Gardners, Pa., the largest apple packer on the East Coast, said he doesn’t believe GMO apples would threaten the market. He wants to plant them when approved.

“I was very impressed with Neal Carter the first time I heard him speak. I’m a big fan of the work he is doing and am very hopeful his company will be successful,” Rice said.

About 10 years ago, a European plum pox virus infected Rice’s peach orchards. He cut them all down to save the rest of the industry. The Agricultural Research Service of USDA is working on genetically engineered rootstock and trees to make them resistant to the plum pox. But it didn’t happen in time to help Rice.

“So to me the work Neal Carter is doing out in British Columbia is very encouraging in that it’s private industry moving ahead in an area that could be helpful in tree fruit,” Rice said.

Beside combating pests and disease, genetic engineering could be used, he said, simply to improve fruit quality.

“If you can silence a gene to prevent browning, there’s great opportunity to make apples sweeter, juicier, firmer,” Rice said. “There are so many things that could be done to increase satisfaction.

“I’m in the business of selling apples. We grow apples. We used to grow peaches. I’ve been doing it for 40 years. I’ve always felt if we could deliver a product of consistent quality, we could increase demand and the price customers are willing to pay.

With genetically modified corn and soybeans already in the American diet, one would think there would be wider acceptance of GMO in all crops, he said.

“But right now there’s a pretty vociferous group that doesn’t want anything affecting the food supply. I know people who hate Monsanto with a passion they would normally reserve for world villains,” Rice said. “But as Neal says, don’t you think we should be able to give customers the choice?”