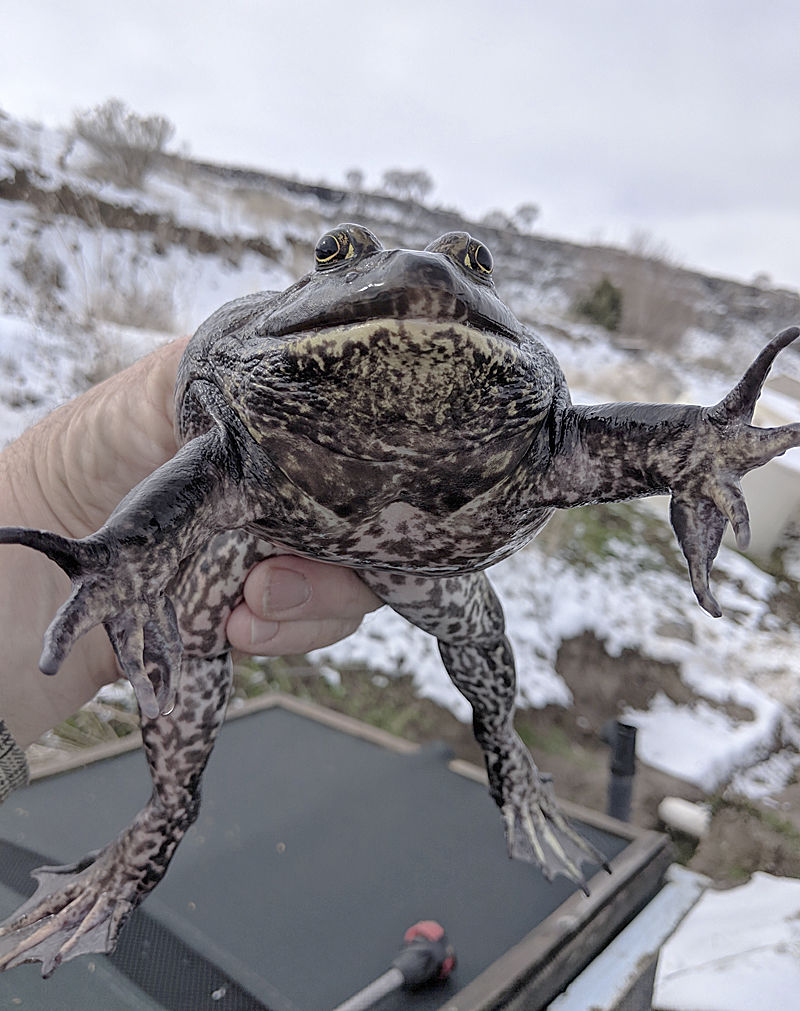 The bullfrogs that Steve Rivas and his wife, Lisa Ault, raise come in four sizes, ranging from 4 inches and 4 ounces to super jumbo at more than 5 1/2 inches and 11 ounces. 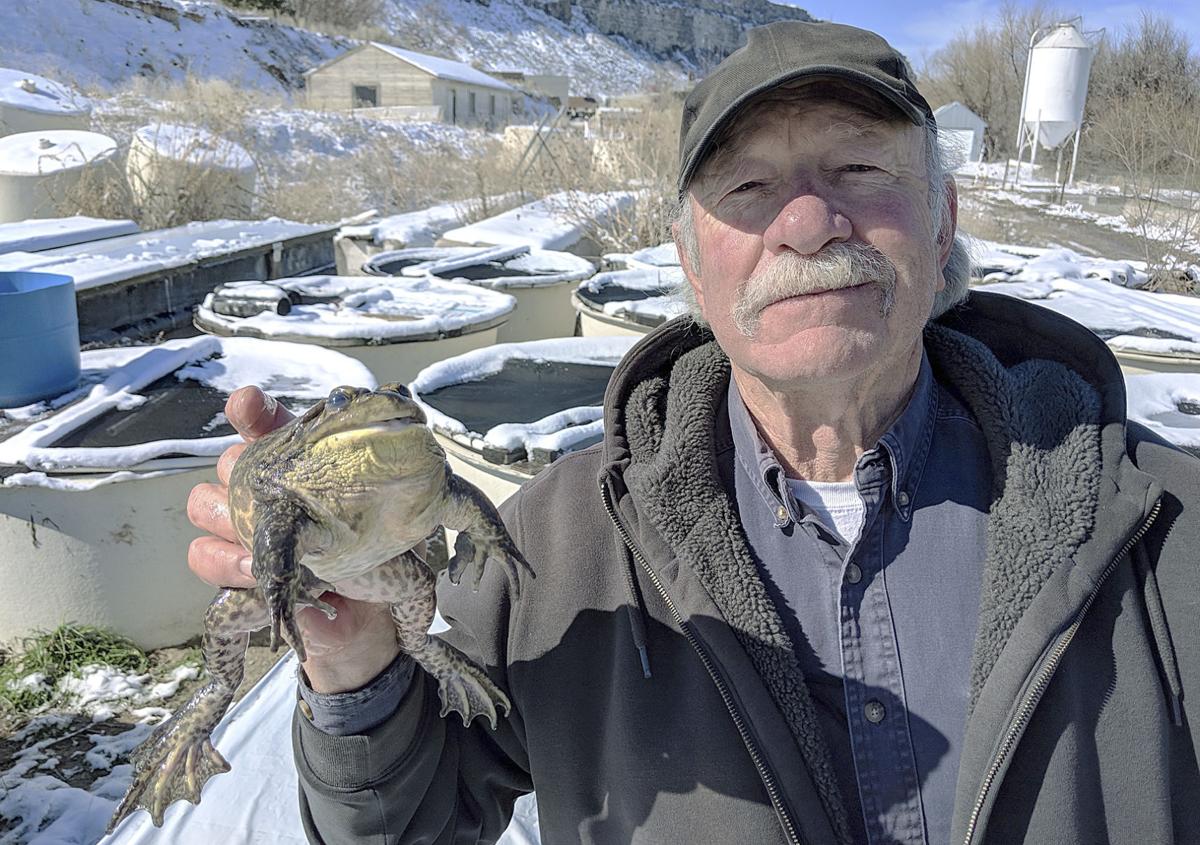 Steve Rivas and his wife, Lisa Ault, raise bullfrogs for medical research. Clients order them in four sizes ranging from 4 inches and 4 ounces to super jumbo at more than 5 1/2 inches and 11 ounces.

The bullfrogs that Steve Rivas and his wife, Lisa Ault, raise come in four sizes, ranging from 4 inches and 4 ounces to super jumbo at more than 5 1/2 inches and 11 ounces.

Steve Rivas and his wife, Lisa Ault, raise bullfrogs for medical research. Clients order them in four sizes ranging from 4 inches and 4 ounces to super jumbo at more than 5 1/2 inches and 11 ounces.

Instead of swinging ropes during roundup at Rana Ranch in southeastern Idaho, Steve Rivas and his family flick dip nets.

“Many researchers have told us our bullfrogs have helped them to understand diseases, and they’ve been instrumental in developing new treatments and remedies,” said Rivas, who lives in Twin Falls, Idaho.

“Besides being used in medical research, our bullfrogs are used to train doctors in surgery, including microsurgery,” he said. “They’re also used in dissection, physiology and psychology labs.”

Rivas started Rana Ranch Commercial Bullfrogs in 1991 while teaching aquaculture at the College of Southern Idaho in Twin Falls. He named the business after the frog’s scientific name, Rana catesbeiana.

He and his wife, Lisa Ault, confronted numerous problems while developing the ranch. How could bullfrogs be fed efficiently, considering they are finicky eaters and cannibalistic? How could their growth be controlled to meet clients’ specific size needs? Once mature, how could they be shipped?

Through years of trial and error, Rivas and Ault devised meticulous protocols — hard-won trade secrets they decline to share.

“We were told it’s impossible to raise bullfrogs as farm animals, but we didn’t listen and didn’t give up,” said Rivas, 68, who retired from CSI in 2015.

“We still haven’t perfected bullfrog culture. It’s an art and a science — just like every other type of farming. We’ve been successful at developing a small obscure farm that supplies an obscure and vital niche market. We raise clean and robust frogs in four consistent sizes, so clients are willing to pay top dollar — an average of $45 a pound.”

They have shipped frogs to 43 states not only for biological research but to stock lakes, wetlands, ornamental koi ponds, water gardens and golf course water features.

“I’ve always liked that distinct bellowing sound they make during breeding season,” he said. “A semi-tame bullfrog can be a real character in an ornamental pond.”

Like the metamorphosis of a tadpole to a frog, Rivas’ business model has transformed considerably — from their living room to an efficient quarter-acre farm where bullfrogs thrive.

Rivas’ career and the ranch are a natural extension of his lifelong fascination for reptiles, amphibians and fish he caught and raised as a child. A poster he drew in elementary school showing a frog’s lifecycle hangs on his office wall.

After graduating from CSI’s aquaculture program in 1989, Rivas took a leap of faith and caught six wild bullfrogs from the nearby Snake River, believing they could be developed into an aquaculture species.

“We kept them in three plastic garbage cans in our living room for more than a year,” he said. “In 1991, we started raising them at an aquaculture farm about 20 miles from town.”

Three years later, they placed an ad in Reptile Magazine, intending to sell bullfrogs as pets. They only sold a few, but fortunately a university lab employee read the ad and contacted him.

“A lightbulb came on, and we sent flyers to 20 universities,” he said. “Sales took off from there.”

As their business grew, their feeding program evolved from raising maggots to a proprietary pellet fed in a specific way.

“Bullfrogs are sight feeders and only eat live food, so for several years we raised up to 100 pounds of housefly maggots a week,” Rivas said. “They grab anything that moves, but if it doesn’t keep moving in their mouth they’ll spit it out. It prevents them from ingesting floating or moving sticks, leaves or other inedible things.”

The frogs grabbed the experimental pellets, “but getting them to swallow them was the hard part,” he said. “It was a happy day in 1994 after about 100 experiments that Lisa found a way to get the bullfrogs to eat pellets — no more maggots. I have a lot of respect for the biomass production capacity of housefly larvae, but maggot farming is a disagreeable endeavor.”

“Once we had them on a pelleted diet, we spent several more years doing feed trials to develop nutritious diets for all their life stages and ages,” said Ault, who graduated from CSI’s aquaculture program in 1992. “It’s complicated. Depending on their life stage, they’re two totally different animals: aquatic herbivores or semi-aquatic carnivores. Much but not all of our feed is plant-based.”

In 1993, they moved to their current location renting space at a local aquaculture farm closer to home that offered hot and cold gravity-fed water. Cold water, about 55 degrees Fahrenheit, is piped directly from a spring, while 102-degree water flows from an artesian geothermal well.

They installed fiberglass troughs with locked tops to protect the tadpoles and frogs from predators. In each trough, Rivas installed cold and warm water lines, allowing the frogs to grow year-round instead of hibernating.

“Hands-on training at CSI and raising them in clean cold and warm water are the keys to farming bullfrogs the way we do,” Rivas said. “Being poikilothermic, their metabolism and growth can be regulated by temperature. We can put them into semi-hibernation to hold them at different stages of growth to save on feed, maintenance and time. We’ve spawned bullfrogs as early as March and as late as August.”

Although he started with frogs caught in 1989, “we didn’t have real success with spawning until 2004,” Rivas said. “Before that, we bought wild-caught tadpoles from private ponds and from CSI for years. It wasn’t until 2009 that we were able to supply all of our tadpoles from our own broodstock.”

With gravity flow of 15 gallons per minute of water, Rivas keeps about 10,000 large late-stage tadpoles on hand.

“Tadpoles can take up the whole water column, while bullfrogs take up floor space. It’s a more efficient use of our limited trough space to keep mostly tadpoles and morph them into bullfrogs as we need them. Generally a newly morphed frog that has lost its tadpole tail matures into a 5 1/2-inch frog within about six months.”

He usually maintains about 3,000 bullfrogs in four sizes. They range from medium at 4 inches and 4 ounces to super jumbo, exceeding 5 1/2 inches and weighing more than 11 ounces.

To tend to his farm, Rivas works about two hours a day feeding frogs and cleaning the troughs. Ault spends two to three hours a week counting, measuring, weighing, and sorting frogs for shipment. Most are shipped during the school year, September to May, with sales slowing down from Thanksgiving through New Year’s.

Having overcome issues dealing with food and rates of growth, Rivas had to figure out how to get the bullfrogs to clients. Relying on UPS Next Day Air, they ship the frogs in six different-sizes of cardboard boxes. He cuts sheets of RMAX, a rigid foam plastic thermal insulation board, and lines each box.

“The RMAX keeps the temperature moderated and makes the boxes extremely durable,” he said. “Clients tell us they like our frogs because they’re accustomed to captivity and people, tolerate handling well, and aren’t easily startled or stressed.”

Rivas emphasizes the farm is sustainable and no herbicides, pesticides, non-organic fertilizers or electricity are used. Manure is composted and effluent water is used for irrigation.

Having developed their frog farming techniques, Rivas said they could raise millions of bullfrogs.

“But that would put us into the food market,” he said, “and that isn’t what we want to do at this point in our lives.”

Education: Both graduated from the College of Southern Idaho with aquaculture degrees.

Products: Bullfrogs are raised in four sizes ranging from 4 inches and 4 ounces to super jumbo at more than 5 1/2 inches and 11 ounces.