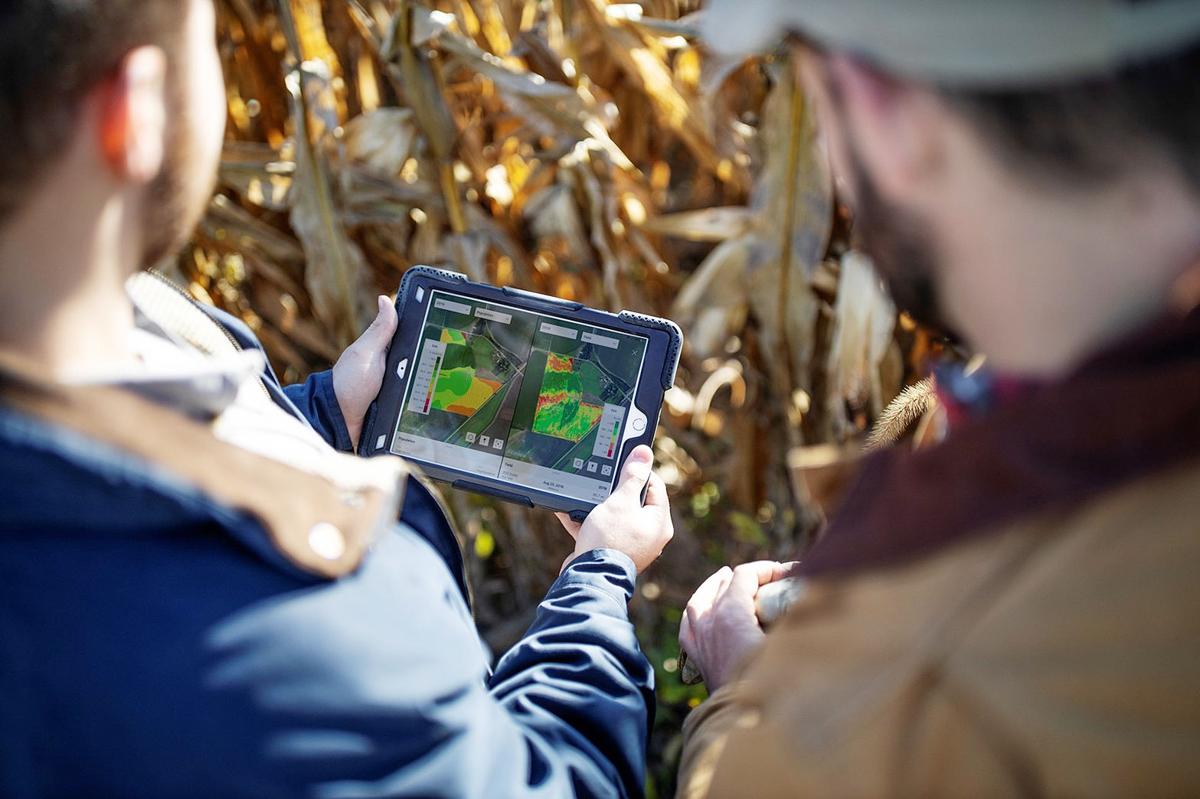 A Bayer employee looks at field data with a customer in this pre-COVID 19 photo. 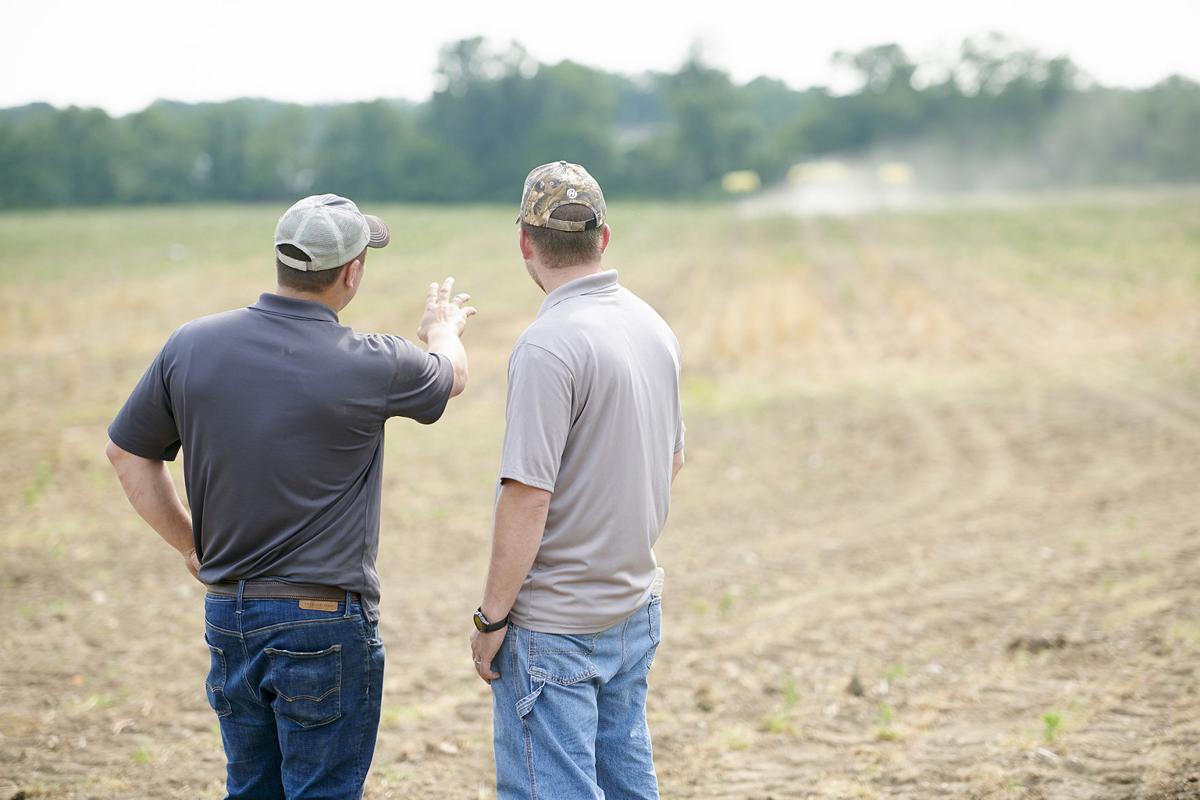 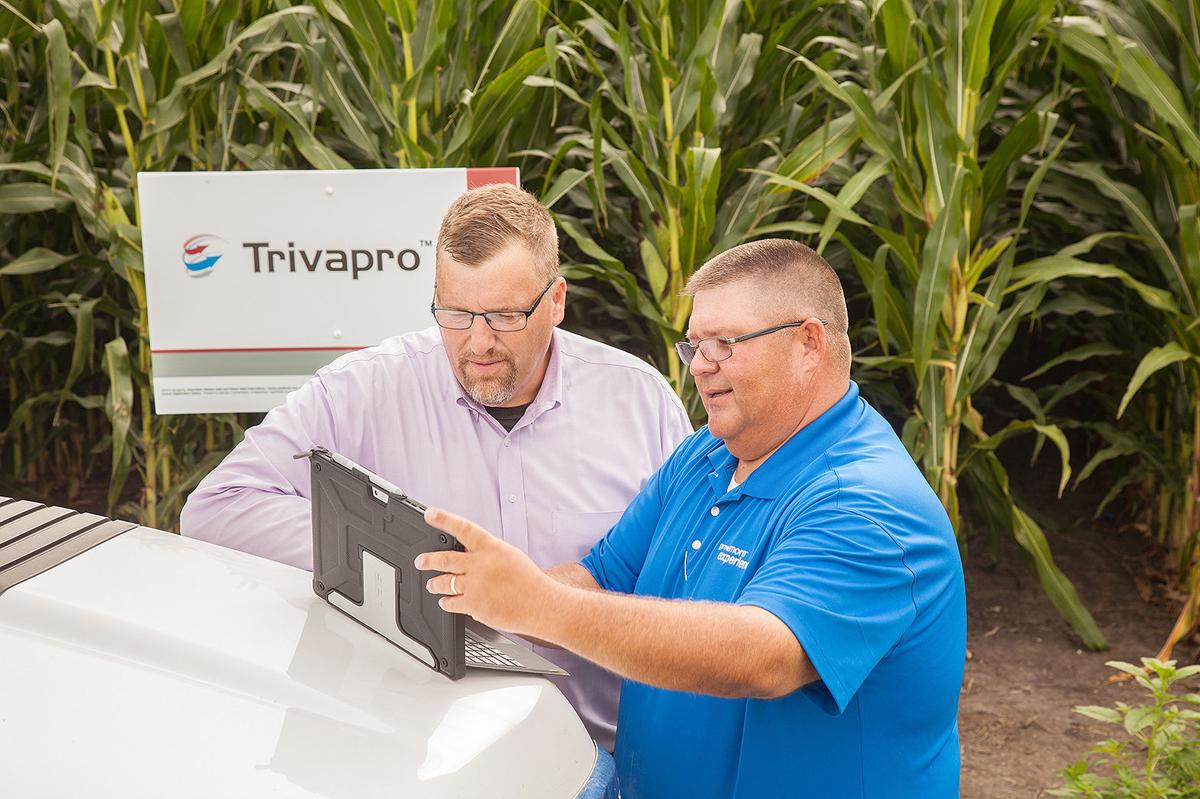 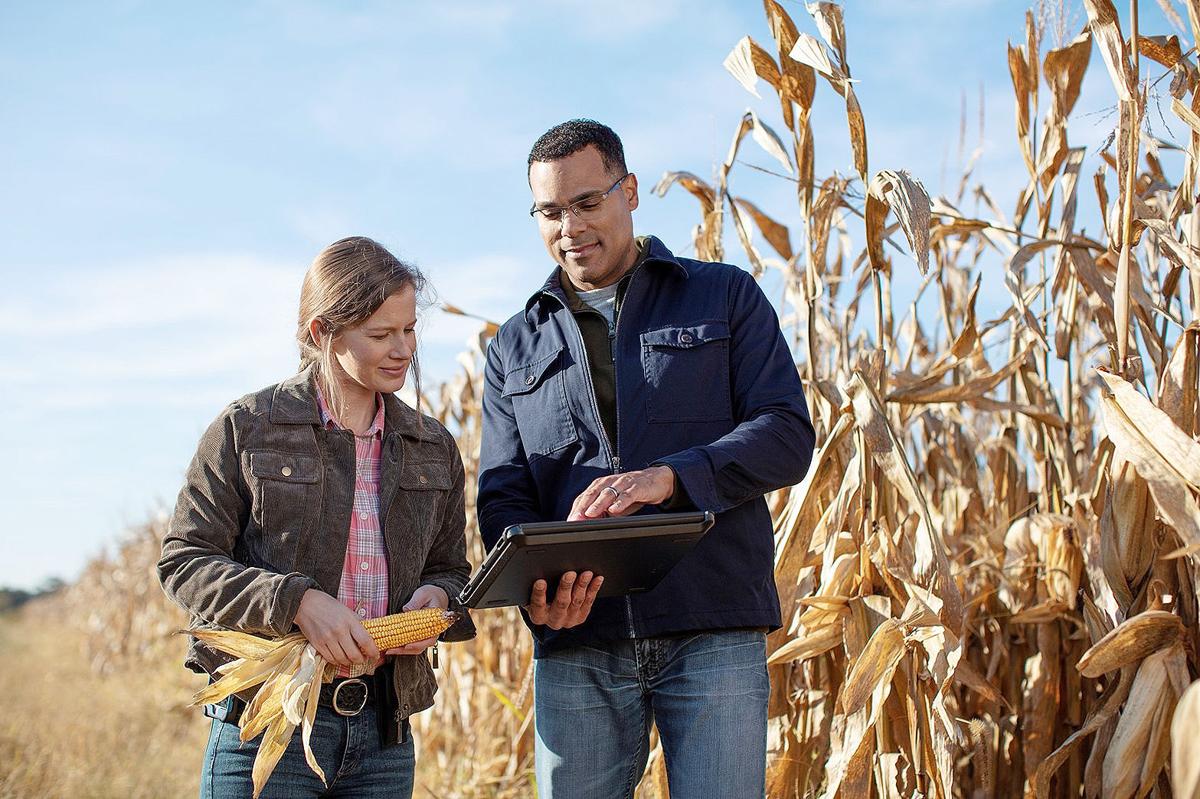 A Bayer employee looks at field data with a customer in this pre-COVID-19 photo. 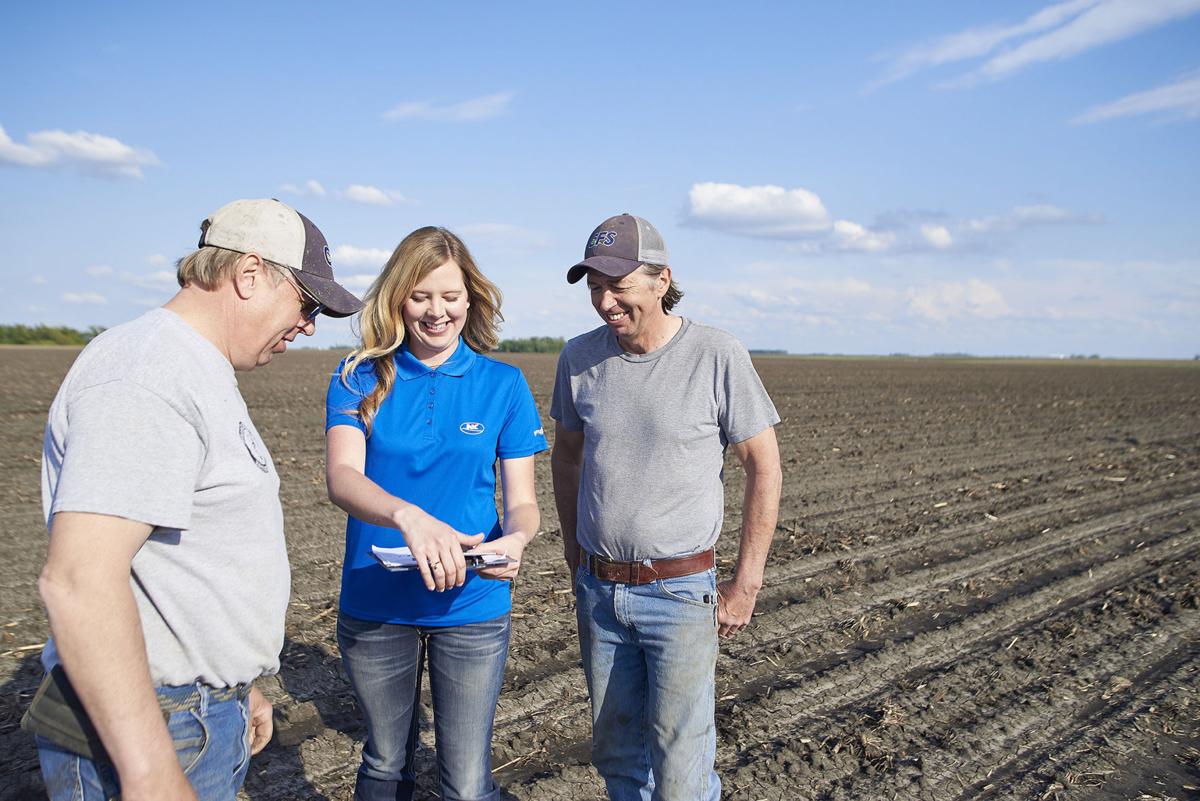 Brothers Tom Franke, left, and Mike Franke work with NK Seeds sales representative Nicole McConnell on the best corn hybrids and soybean varieties for their farm in Hayfield, Minn. in this 2017. 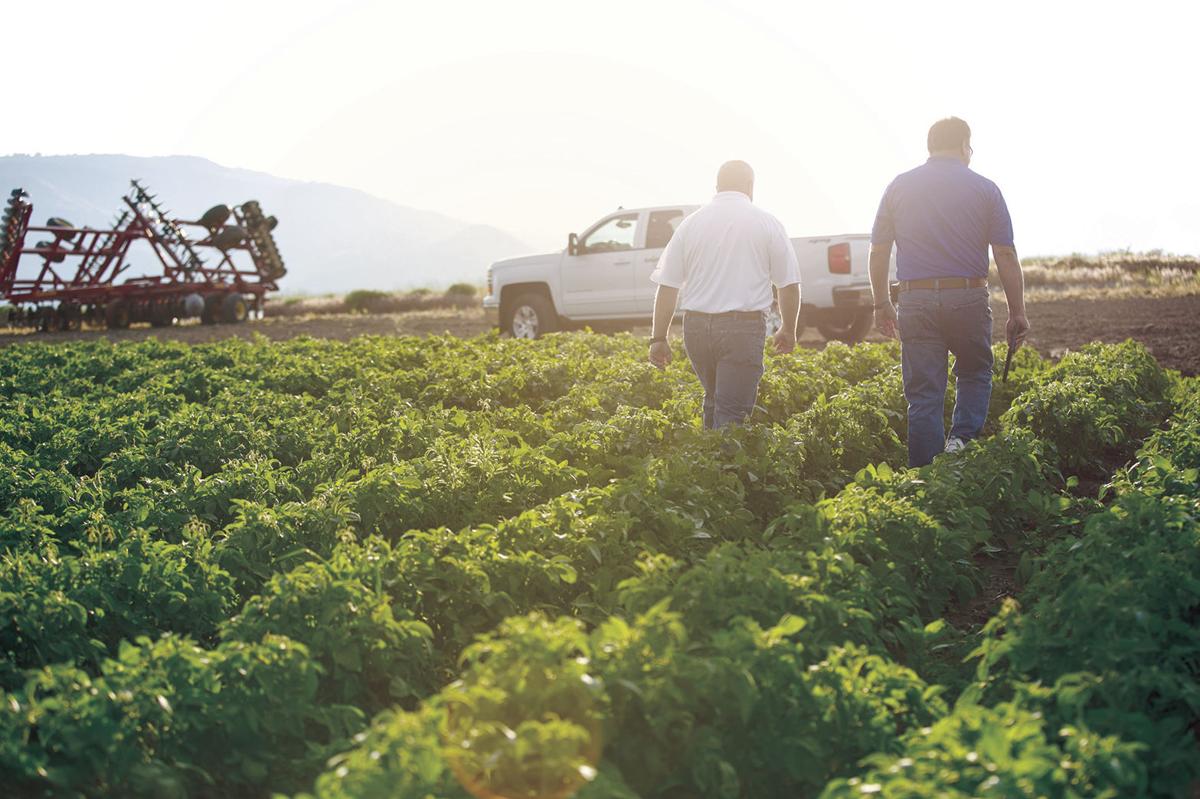 A crop adviser for Simplot Grower Solutions helps an Idaho potato farmer inspect his crop. Simplot and other companies are researching way to help farmers cope with a changing climate. 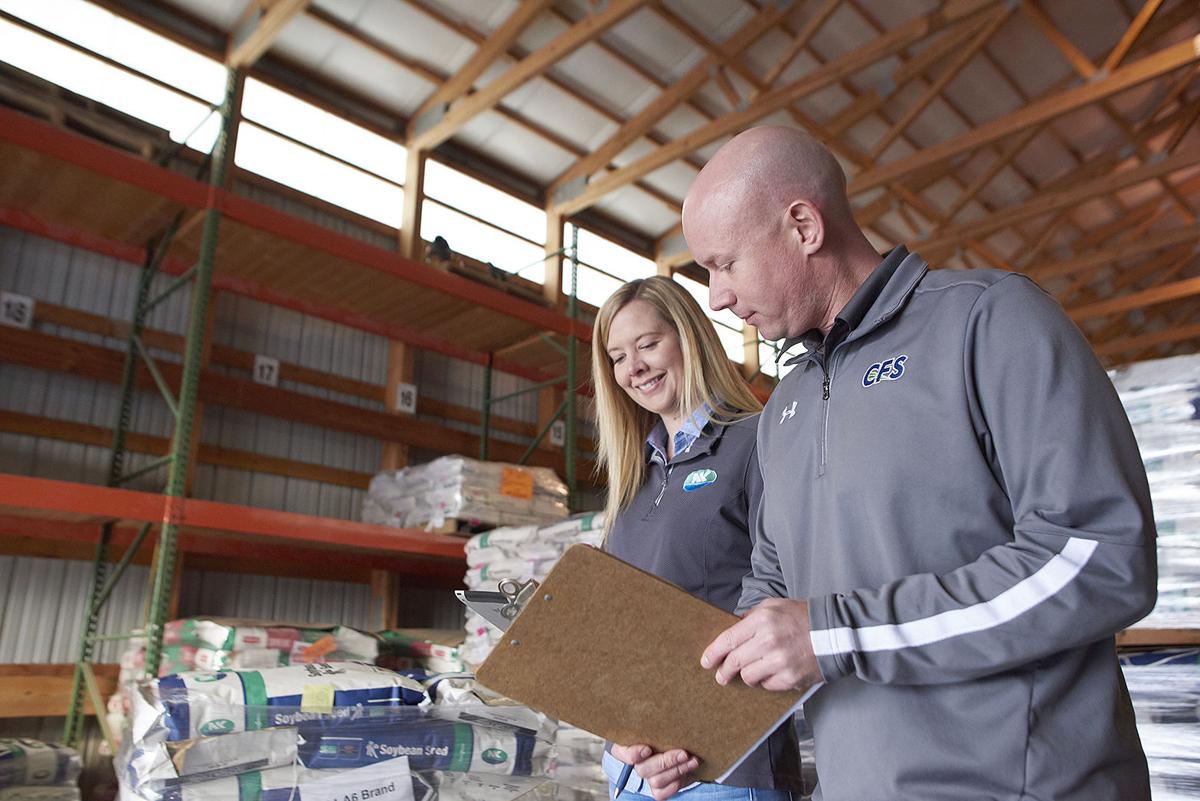 Ryan Larson with Central Farm Service and Nicole Deitloff, his NK sales representative, review data at the CFS facility in Blooming Prairie, Minn., in this 2017 photo. 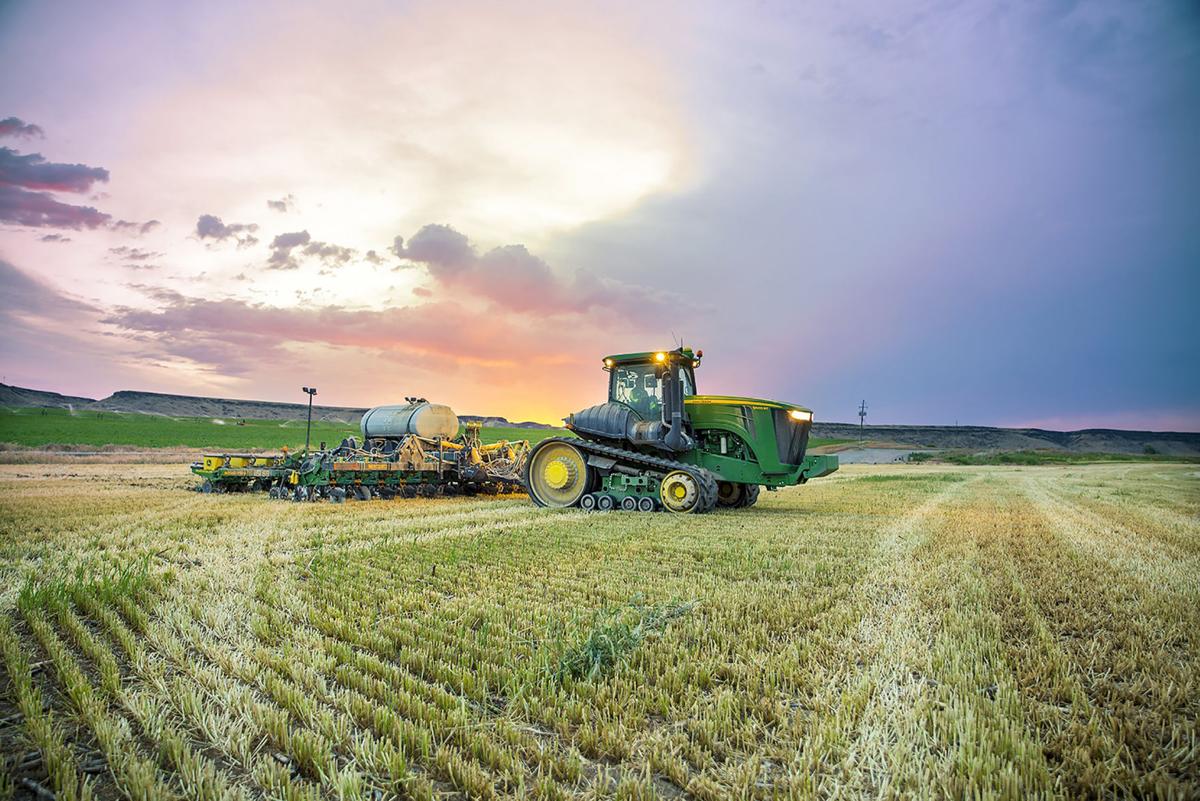 A tractor rolls on Simplot’s Grandview Farm in Southern Idaho. Simplot and other companies are developing tools to help farmers cope with a changing climate. 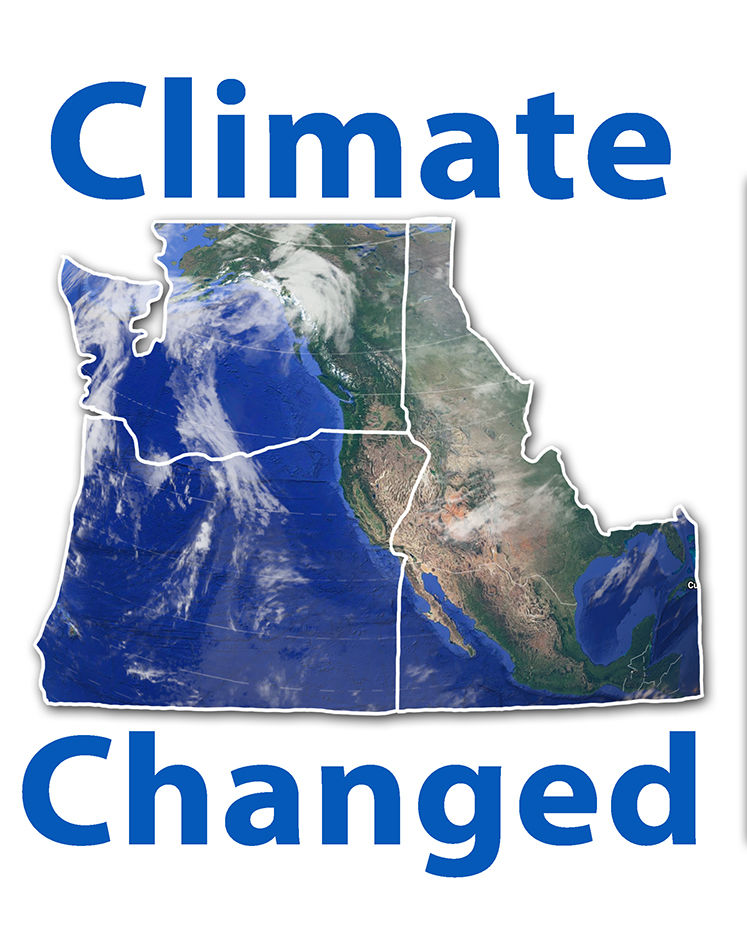 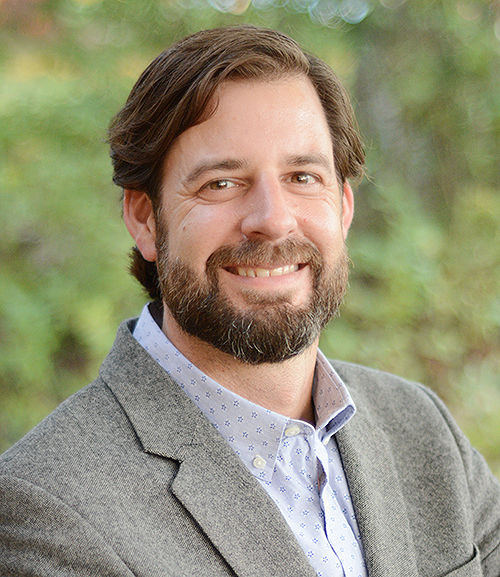 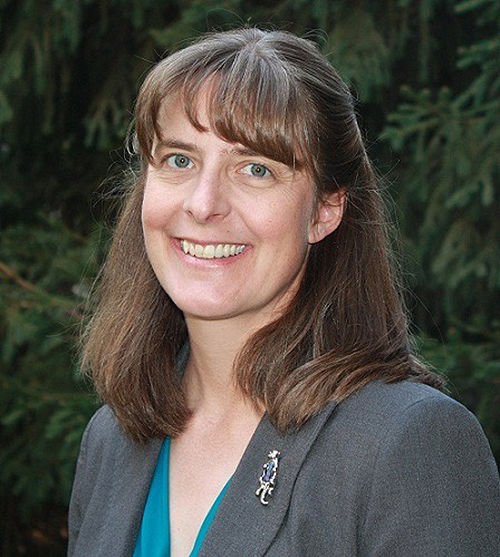 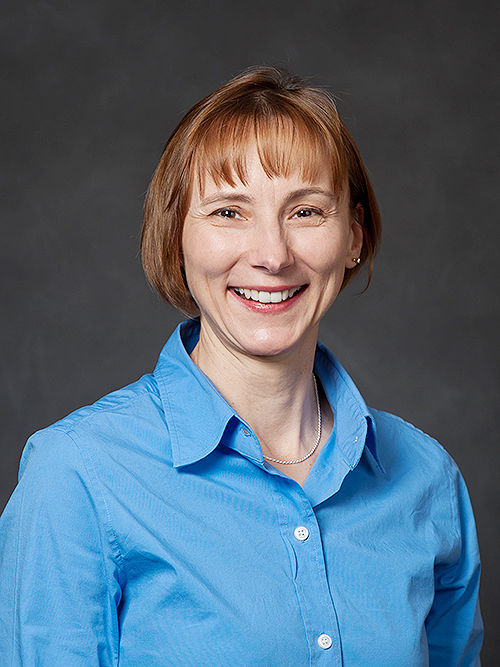 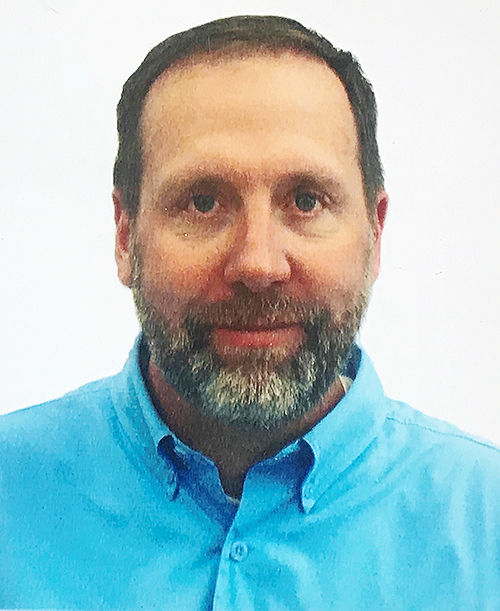 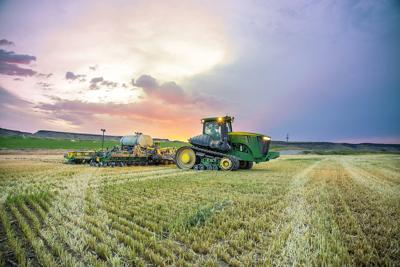 A Bayer employee looks at field data with a customer in this pre-COVID 19 photo.

A Bayer employee looks at field data with a customer in this pre-COVID-19 photo.

Brothers Tom Franke, left, and Mike Franke work with NK Seeds sales representative Nicole McConnell on the best corn hybrids and soybean varieties for their farm in Hayfield, Minn. in this 2017.

A crop adviser for Simplot Grower Solutions helps an Idaho potato farmer inspect his crop. Simplot and other companies are researching way to help farmers cope with a changing climate.

Ryan Larson with Central Farm Service and Nicole Deitloff, his NK sales representative, review data at the CFS facility in Blooming Prairie, Minn., in this 2017 photo.

A tractor rolls on Simplot’s Grandview Farm in Southern Idaho. Simplot and other companies are developing tools to help farmers cope with a changing climate.

Farmers have always been at the mercy of Mother Nature, but climate change has made her an unpredictable partner.

Less snowpack to provide irrigation water, scorching heat, longer droughts, drenching rainfall and catastrophic flooding are all occurring more frequently around the world as minor increases in global temperatures set off major shifts in the predictability of weather.

“There’s no such thing as an average year, but the swings are getting more extreme for most farmers,” said Andy Knepp, head of environmental strategy and industry activation for Bayer AG.

Broadly speaking, weather is much less predictable for farmers, he said.

“Adapting to changes is critically important to them in their operations. Ultimately, we’re really looking at how do we help them stay in business,” he said.

Around the world, agribusinesses are pouring resources into innovations and technology that will help farmers and ranchers survive — and thrive — as the climate changes. New hybrids of crops, new chemistries aimed at the shifting populations of pests and technology that will allow farmers to fine-tune their strategies on the fly are all being added to producers’ toolboxes.

Companies are even helping to develop a new market for carbon credits that farmers will be able to cash in.

At Bayer, Knepp said research-and-development has shifted into high gear to produce higher-yielding crops that perform under extreme conditions — whether it’s drought, disease, pest pressure, changes in the duration of the cropping season or the expansion of cropping areas. The company is also developing better crop protection products, he said.

Another focus is putting more information at farmers’ fingertips through digital technology to help them make more informed decisions. That includes information on soils, weather and Bayer’s unique insight into its crop genetics so farmers can tie it all together with seeding rates and how seed interacts with soil and the weather patterns as they unfold, he said.

“We want to make sure we’re addressing issues that may be emerging,” he said.

Temperature and moisture are the typical drivers of crop response, and farmers face challenges with both every year.

“As a farmer, to be able to manage through those in a growing season is a complex challenge,” he said.

But Bayer has also looked at climate change as a potentially enormous driver and considered its role in the issue — which, as a company, is to be carbon neutral.

Its commitment also extends well beyond that — to helping agriculture reduce its carbon footprint as well, he said.

Bayer has committed to reducing the environmental impact of crop protection by 30% through innovative technologies that range from digital farming to new crop protection tools, precision ag applications and plant breeding.

It has also committed to reducing by 30% field greenhouse gas emissions by using digital tools and data.

The company has taken a broader, collaborative approach working with other groups and businesses focused on shrinking agriculture’s overall environmental footprint.

The company has also partnered with the Ecosystem Services Market Consortium to set up a market for farmers to sell credits they receive for reducing their environmental impact, such as by carbon sequestration.

“Farmers can be a solution, but there’s going to have to be incentive to drive that adoption,” he said.

Bayer is working closely with farmers and learning from what they’re seeing and doing, and it’s working with partners in the industry, he said.

“For us, it’s really about thinking through what does the future look like. Agriculture doesn’t exist if we don’t have a healthy planet. … We have a responsibility to work toward creating a healthy environment,” he said.

Climate change is a global issue, and agriculture has the know-how and technology to address it, and progress has already been made, he said.

“Our ability to manage this challenge with the adoption of technology is enormous,” he said.

Climate change is altering the agricultural landscape in many ways, and each change has a domino effect, said Jill Wheeler, head of sustainable productivity for Syngenta North America.

“All of the previous rules have kind of gone out the window,” she said.

Farmers used to be able to have some expectation of a particular growing season, but that’s changing and there are so many interrelated factors, she said.

Some areas, for example, are getting a lot more precipitation, and that’s making it difficult to get in and out of the field and is creating challenges with soil structure and increasing disease pressure.

There are also shifts in insects, both unwanted and beneficial species, and changes in growing environments.

All of the changes mean there is greater need for better data to know which product works best now in different locations.

Syngenta is focused on digital and analytical data that relay more data points and is working with a variety of tools, including sensors collecting sub-surface moisture levels.

It also just launched a mobile application for its farm-management software. That software, Land.db, now ties into the Cool Farm Tool, an online greenhouse gas, water and biodiversity calculator.

Cool Farm Tool allows farmers to evaluate their management practices, not just from a profit perspective but also their carbon footprint, she said.

“Farmers have to be economically sustainable, but changes that make them more profitable can also improve their carbon footprint,” she said.

They can collect data to help determine their carbon footprint, which can be used if they want to sell credits for carbon, water use reductions and improved water quality in an ecosystem services market.

Like Bayer, Syngenta is a member of the Ecosytem Services Market Consortium, which is working to set up such a market.

The company’s Land.db software will record the information, such as inputs and management practices, needed to trade assets in that market, she said.

For livestock, Syngenta has developed Enogen Feed corn hybrids that increase feed efficiency 5%. That reduces the carbon footprint of both meat and milk and offers a benefit to food companies as more consumers expect sustainability, she said.

“All of these tools help farmers do a better job of telling their sustainability story, and that’s increasing,” she said.

The company is also working on reducing the use of pesticides and with the Nature Conservancy to evaluate how products, practices and technology can benefit farmers, nature and society.

It has also committed $2 billion to developing two breakthrough technologies in agricultural sustainability per year over the next five years.

In addition to solving problems for farmers, the company is focused on accelerating innovations that are potential solutions to soil health, water quality and environmental biodiversity, she said.

Agriculture’s investment in sustainability is making a difference on and off the farm. Over the past two years, she’s seen the social discussion on climate change move from denial or finger-pointing to solutions, with agriculture sometimes being the star.

“It’s rewarding to see more and more people beginning to understand the capacity agriculture has to mitigate climate change,” she said.

The two biggest things Simplot is focused on to help producers deal with the changing environment are water management and developing more resilient crop varieties.

Most Western agriculture is under irrigation, and growers can operate their systems through their smart phones.

SmartFarm allows Simplot to manage water effectively across a large swath, he said.

“To complement that, we have a variety of sustainability products in our Plant Health Technologies platform. We’re helping growers be more adaptive with moisture management,” he said.

Variety development also helps growers produce quality and quantity to keep them competitive in the marketplace with crops that are suited to environmental extremes, he said.

No one can pinpoint when climate change began, but weather patterns and prediction models for such things as harvest have changed, she said.

That’s where technology and precision agriculture can help growers make adjustments, she said.

“We can react to those changes in real time,” she said.

With Simplot’s programs, growers can make in-season modifications to manage the crop from planting to harvest, Crawford said.

“We hang our hat on being able to provide real-time data so we can make data-driven decisions,” he said.

Simplot is working on climate change in so many ways and on so many different parts, Wilson said.

In addition to helping growers lessen their environmental impact, the company is also reducing its carbon emissions and partnering with other groups for a broader effect.

Simplot is a founding member of the Potato Sustainable Alliance and also belongs to the U.S. Roundtable for Sustainable Beef and the Fertilizer Institute’s 4R Nutrient Stewardship guiding precision application.

As a company, Simplot is looking at where it can best intervene in the whole food supply chain regarding climate change, Wilson said.

“Everybody looks at climate change as a challenge and a problem to be solved. For agriculture, it’s also an opportunity to be part of the solution,” she said.

Field to Market has more than 140 members, including agribusinesses and brands.