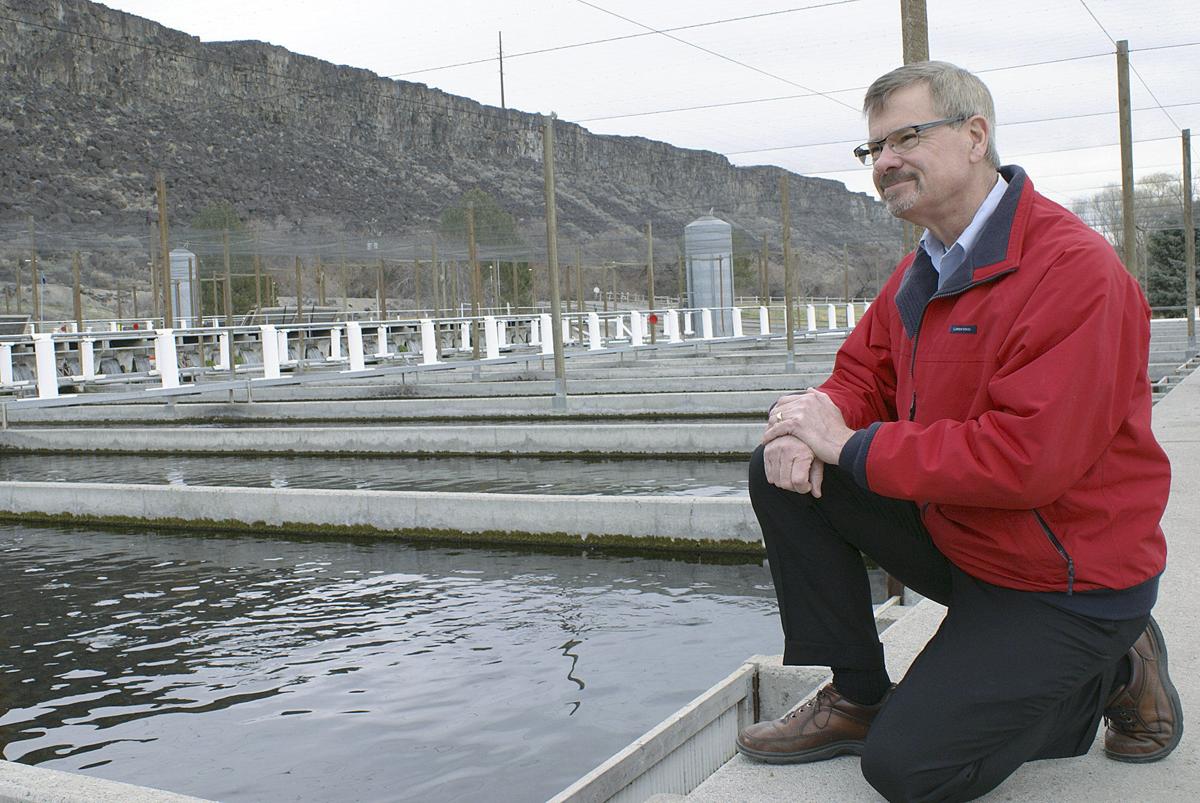 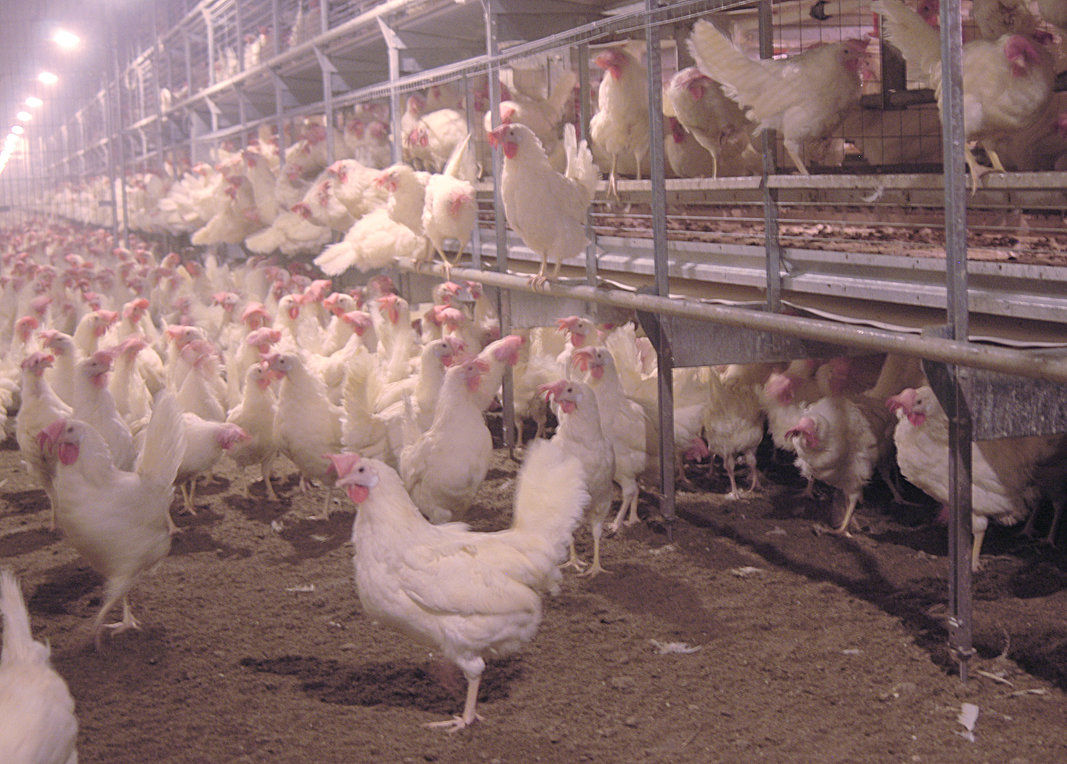 Eric Mortenson/Capital Press Perch pipes, nesting areas and the chickens' ability to walk about, scratch and socialize define their eggs as “cage free” – although the hens never leave Willamette Egg Farms' henhouses. The farm's cage-free eggs are certified by the American Humane Association. 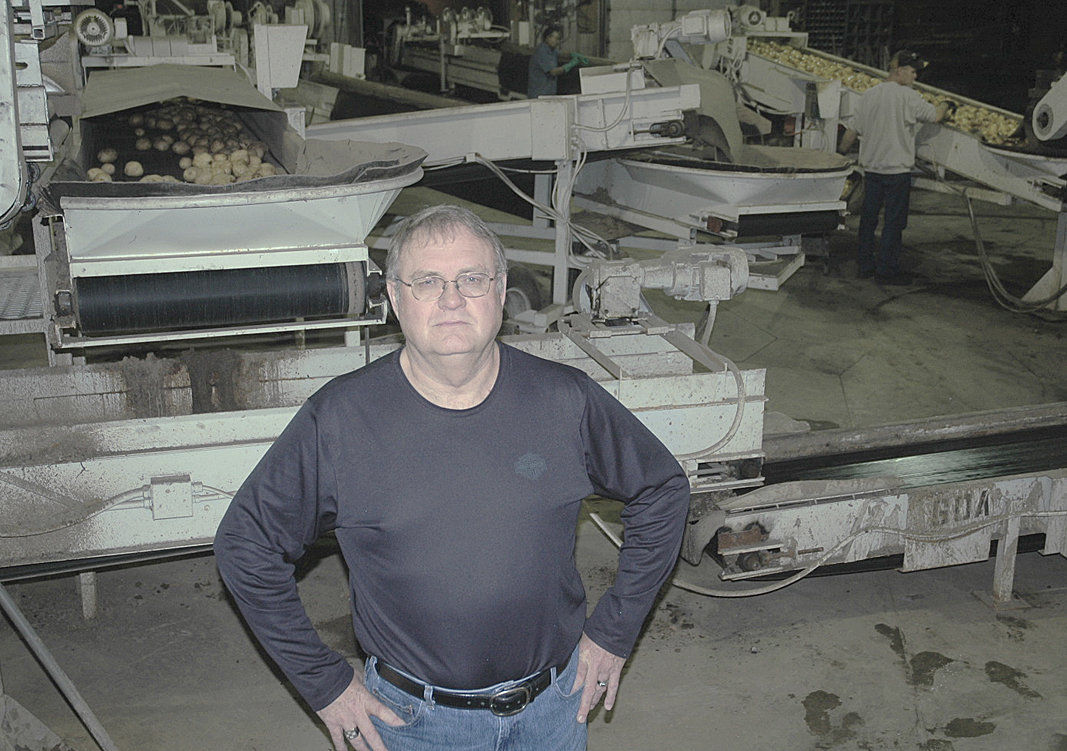 John O'Connell/Capital Press Steve Theobald, an owner of R & G Potatoes in American Falls, Idaho, said his company has to comply with a new audit at the request of customers this year. Theobald worries buyers may eventually set input benchmarks for theif food producers. 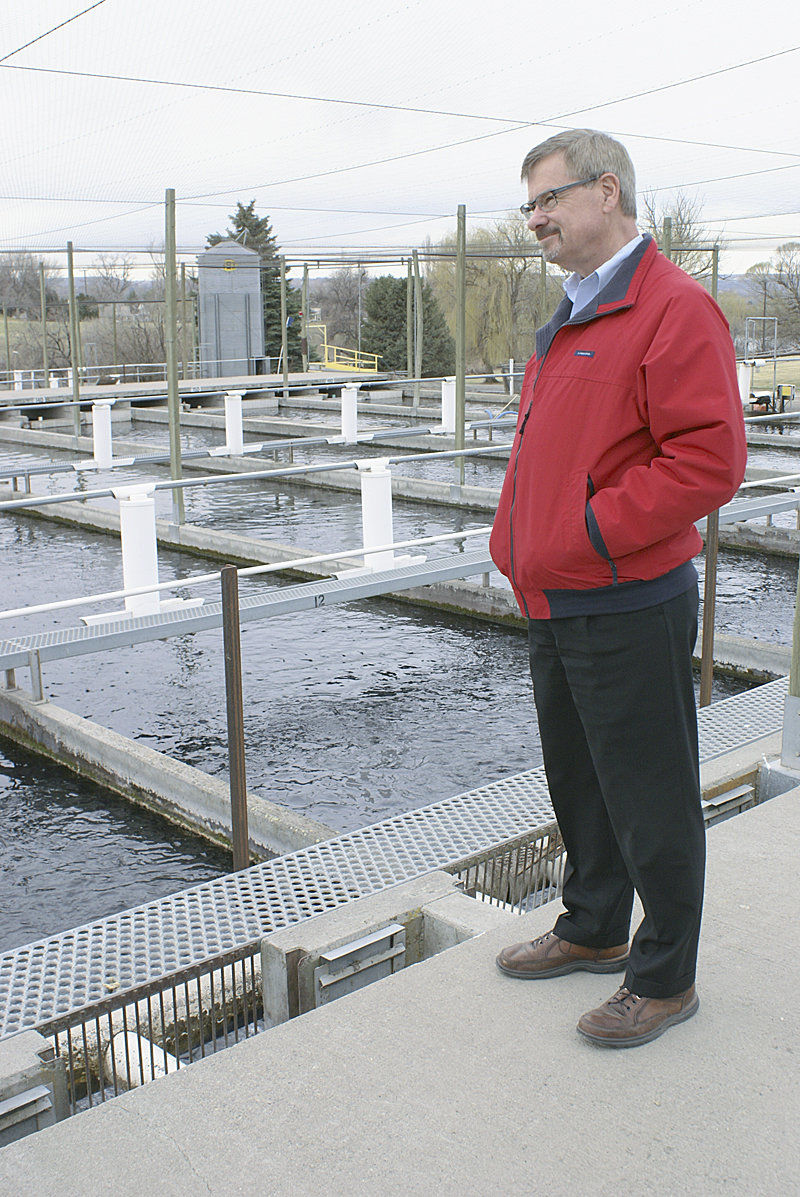 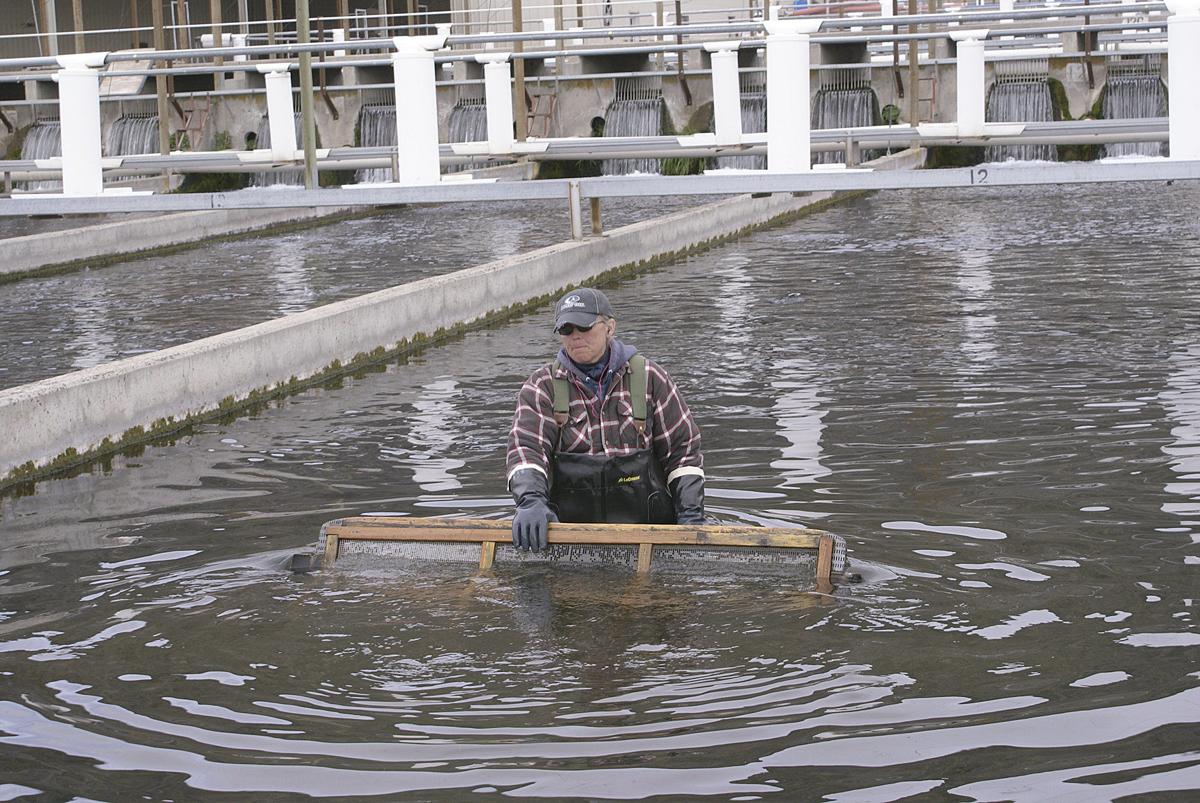 A worker at Snake River Farms, one of Clear Springs Foods' smaller fish facilities in Buhl, Idaho. The company has announced layoffs of a large portion of its workforce after most U.S. restaurants were closed.

Eric Mortenson/Capital Press Perch pipes, nesting areas and the chickens' ability to walk about, scratch and socialize define their eggs as “cage free” – although the hens never leave Willamette Egg Farms' henhouses. The farm's cage-free eggs are certified by the American Humane Association.

John O'Connell/Capital Press Steve Theobald, an owner of R & G Potatoes in American Falls, Idaho, said his company has to comply with a new audit at the request of customers this year. Theobald worries buyers may eventually set input benchmarks for theif food producers.

A worker at Snake River Farms, one of Clear Springs Foods' smaller fish facilities in Buhl, Idaho. The company has announced layoffs of a large portion of its workforce after most U.S. restaurants were closed.

Randy MacMillan and the employees at Clear Springs Food are preparing for the latest in a growing list of audits.

The Buhl, Idaho, trout farm is subjected to six annual third-party audits of its environmental impact, food safety practices and how socially responsible it is. The audits, MacMillan said, require mountains of paperwork, and the company must pay fees based on its annual production.

The audits are on top of some 1,300 regulations generated by 30 government agencies that domestic aquaculture operations must meet, said MacMillan, the company’s vice president.

But the certifications assure retailers — and their customers — that Clear Springs Food products meet their expectations.

In recent years, a rising tide of audits and certifications has swamped many producers, from those who raise trout to those who raise cattle and other crops. The audits and certifications assure consumers that no salmon were hurt in growing an apple, or that a cherry meets Europe’s rigorous farming standards. They signify that food has no genetically modified ingredients or that chickens were well-treated. They even certify that no slaves were used.

Worldwide, 463 labels in 199 nations certify that products — many relating to food — meet ecological standards. The best-known certifications cover whether food is raised organically, but others cover a wide range of issues, qualities and concerns.

To keep up, companies have hired employees, developed new policies and cranked out reams of reports demonstrating their corporate social responsibility in response to increasing scrutiny by consumers and advocacy organizations.

In some cases, the certifications merely add to the bureaucracy of food production. But in others — as with the recent flood of new corporate policies demanding eggs from cage-free hens, banning gestation crates for sows and antibiotic-free meat — farmers argue certifications often duplicate each other or government regulations or they aren’t economical, realistic or science-based.

Those who track the trend say the common thread is new certifications and audits are surfacing at an alarming rate. They say the trend demonstrates a lack of understanding on the part of the public and corporate customers about the realities of modern agriculture.

Ron Cegnar, who runs Kentucky-based CEO Partners and has helped build supply chains for clients such as McDonald’s and Burger King, advises agricultural producers and companies to take positions now on social-responsibility issues. By using third-party science, they can get ahead of the issue rather than waiting for uninformed customers to impose unreasonable demands on them.

He also believes it’s more critical than ever for producers to communicate with consumers and rekindle trust, so animal rights groups don’t step in to speak on their behalf.

“The consumer today does not understand how our food and animals are raised,” Cegnar said. “We haven’t set our own standards, so consequently activists go after a chain or retailer, and they get that chain or retailer to react, and that puts everyone else on the defensive.”

Rather, Cegnar contends policies invented by animal activists aim to raise the cost of production to the point that meat and eggs can no longer be economically produced. In Europe, where Cegnar attended the recent World Food Show, he said retailers have such unrealistic expectations of producers that imports are replacing entire agricultural sectors.

“That’s all headed this way, and it’s going to get much worse,” Cegnar said. “It’s a tsunami, in my opinion.”

Despite the trend, Cegnar said just 7 percent of producers have made the conversion, due to the overwhelming cost of overhauling their facilities.

The use of antibiotics in animals is another top-of-mind issue for some consumers. Even though Smith says antibiotics are an important tool for animal health, a growing list of restaurants has targeted their use in meat and poultry. National chains such as McDonald’s, Chick-fil-A, Dunkin Donuts, Panera, Papa John’s Pizza and Subway have said they will no longer serve chicken that has been given antibiotics, or will phase it out.

Lately, most of the announcements have involved buyers demanding eggs produced by cage-free chickens. Thirty-three restaurant chains say they plan to serve only cage-free eggs within the next decade. Ten retail chains, 11 food manufacturers and seven hotel and cruise line companies also plan to switch to cage-free eggs.

“We are hearing announcements almost daily now, particularly on the issue of cage-free eggs,” said Smith.

Smith noted the most comprehensive study of raising chickens found the “enriched colony” system is the most humane form of housing, even compared to a cage-free setting. Enriched colony cages are more spacious, with additions such as perches that allow birds to exhibit natural behavior.

“The trend of all these announcements creates a real struggle for the agricultural community to keep up,” Smith said. “The producer may sell to five different stores and have five different requirements and expectations.”

More than half a billion U.S. animals are raised each year by farms certified by the American Humane Association, founded 138 years ago.

AHA senior adviser Kathi Brock agrees many common animal agriculture practices warrant reform, but some of the recent corporate policy announcements demonstrate that the pendulum has swung far past the mark to correct the problems.

According to a 2014 AHA survey of 5,900 consumers, 75.7 percent of respondents were willing to pay more for meat, dairy products and eggs from more humanely treated animals — up from 74 percent in 2013.

But Brock sees no need for consumers to pay up to $3 per dozen more for cage-free eggs when enriched colony production is far cheaper and just as humane.

AHA, however, doesn’t certify “conventional” cages that offer birds no room to maneuver.

Brock’s organization also disapproves of keeping a sow in a stall during its entire 160 days of gestation, but supports the use of the tool from a week to 10 days.

Brock sees no reason to eliminate any option that is “affordable, and (produces) safe food and ethically raised.”

But she predicts in the future, “If you’re going to do business in the U.S. with major retailer and food service, you’ll probably need to be verified by a third party and do business at a high standard.”

Declo, Idaho, potato farmer Mark Darrington is occasionally subjected to a special audit by the processor that handles his crop.

“They’ll ask questions about hiring practices, disposal of chemicals, waste management and diversity within your group,” Darrington said, adding that requirements have increased during the past decade, to the point that he’s assigned an employee full-time to handle compliance.

Thresher Artisan Wheat operates a sustainability program for Eastern Idaho growers, who must track their inputs, yields and farming practices and compare them with others in the program, while also generating data on practices that work.

“This gives us the horsepower to tell regulators, ‘Hey, we’re doing fine, and we’ve got the data to back it up,’” Bradford Warner, vice president of marketing with Thresher’s parent company, Agspring, said during a recent grower meeting.

Steve Theobald, an owner with R&G Potatoes in American Falls, Idaho, said his customers are requiring his fresh chipping potato company to undergo a Global Good Agricultural Practices — called Global G.A.P. — audit starting this year. Customers used to ask only about the products his growers use, but he said they now want to know what, how much and when.

The FARM program offers a training manual and videos on all aspects of animal care, adapting the latest science. Operations are evaluated every three years, and results are verified by third-party experts. Results are published in a Year in Review report.

Tail docking — removing a portion of an animal’s tail to keep it cleaner — is being phased out under FARM, said Bob Naerebout, Idaho Dairymen’s Association executive director.

“There’s a new level of accountability for all of ag, not just dairy,” Naerebout said. “That’s being driven by consumers wanting to know more about food production.”

In October, IDA hired a staff member with a doctorate in environmental science to help producers implement their nutrient management plans. Naerebout said IDA has helped push for immigration reform, vowing on its website to advocate legislation that addresses “secure borders, allows our current labor force to remain in the U.S., legally provides for earned citizenship and is flexible in addressing future foreign-born labor needs.”

National Cattleman’s Beef Association spokesman Chase Adams said his organization has worked with the Food and Drug Administration to draft its voluntary guidelines “aimed at eliminating the use of medically important antibiotics in feed and water for growth-promotion purposes, and increased veterinary oversight.”

“There’s a lot of misunderstanding now about the use of antibiotics in livestock,” Adams said.

Smith, of the Animal Agriculture Alliance, said her group advises members to familiarize people at every step in the supply chain of their own social responsibility programs to help them respond to pressure from advocacy groups.

University of Idaho economist Cathy Roheim emphasized corporate responsibility can also benefit producers. In a 2011 report, Roheim estimated consumers in England were willing to pay a 10 to 15 percent premium for seafood labeled as sustainable.

“I think this is going to continue,” Roheim said. “People who buy what we produce indicate more and more what attributes they want to buy.”

Drop in COVID-19 infections will allow Oregon to loosen restrictions