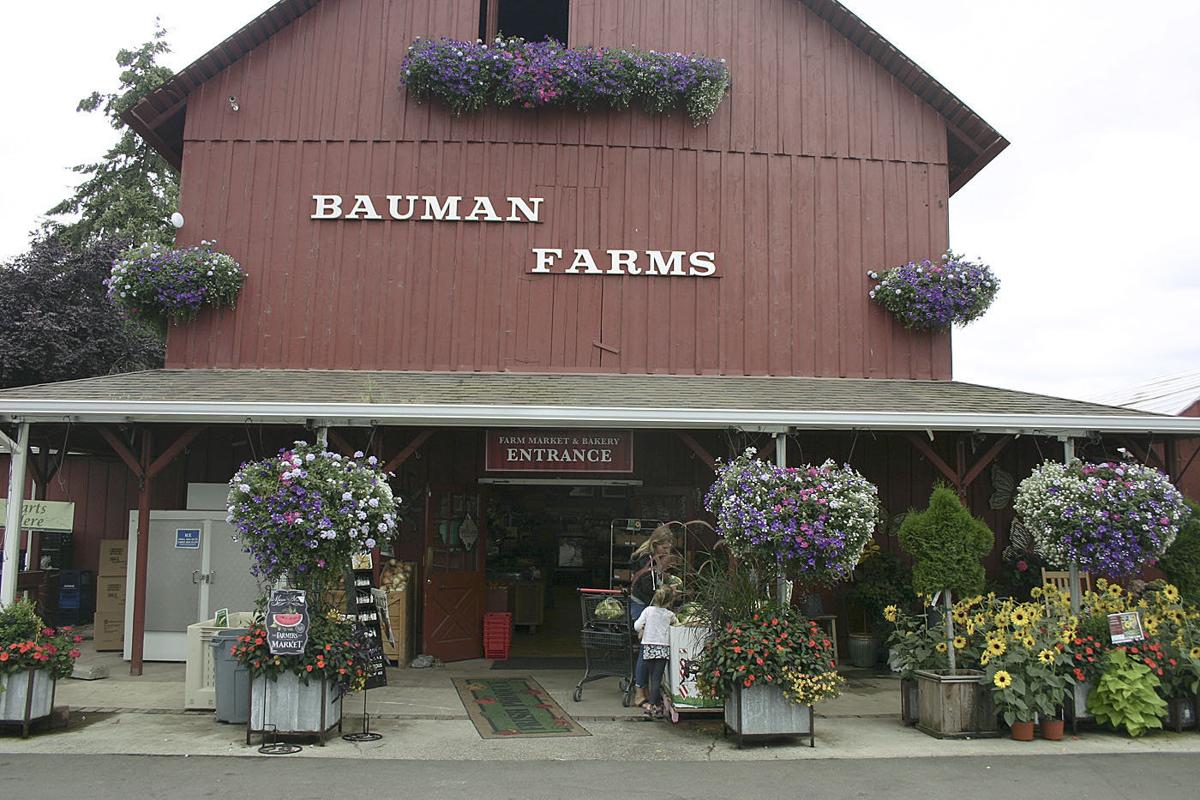 A hay ride is one of many activities farms offer as they get involved in agritourism. 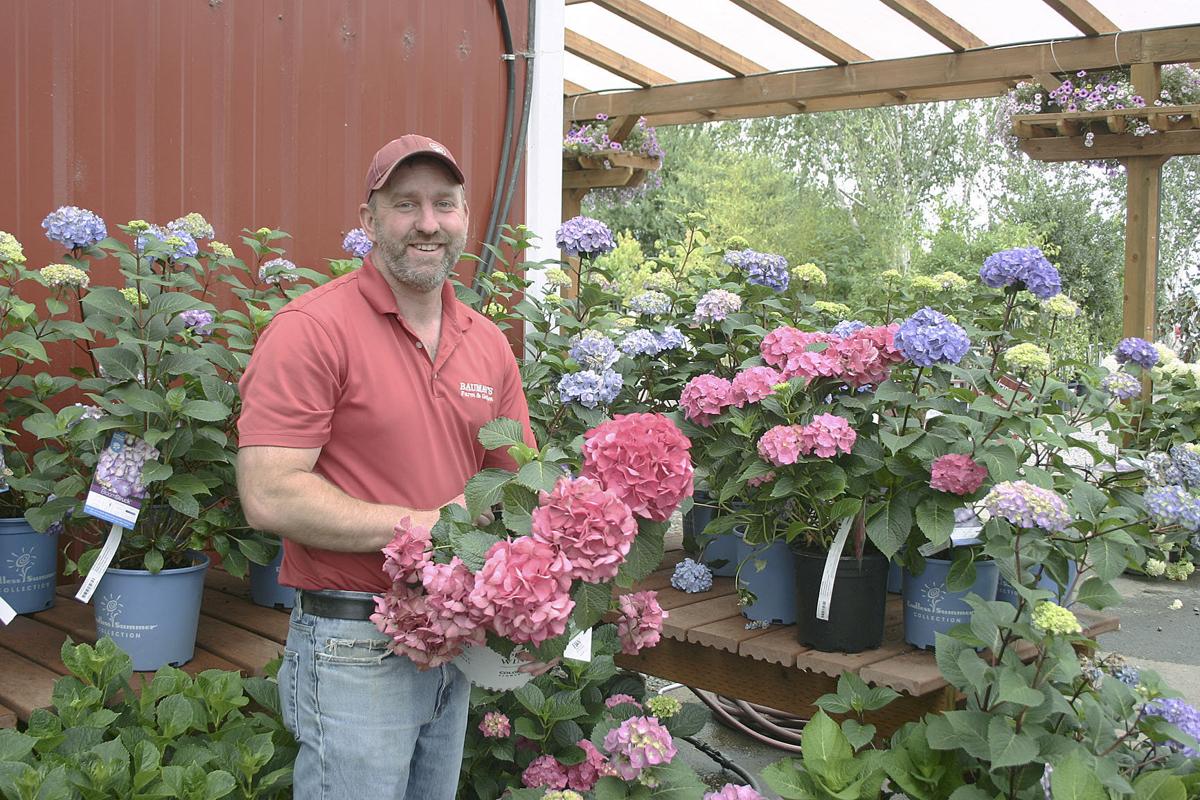 Brian Bauman is the great grandson of the founders of Bauman's Farm near Gervais, Ore. The farm's current agritourism operation began with his second-grade class when it took a field trip to the farm to get pumpkins. 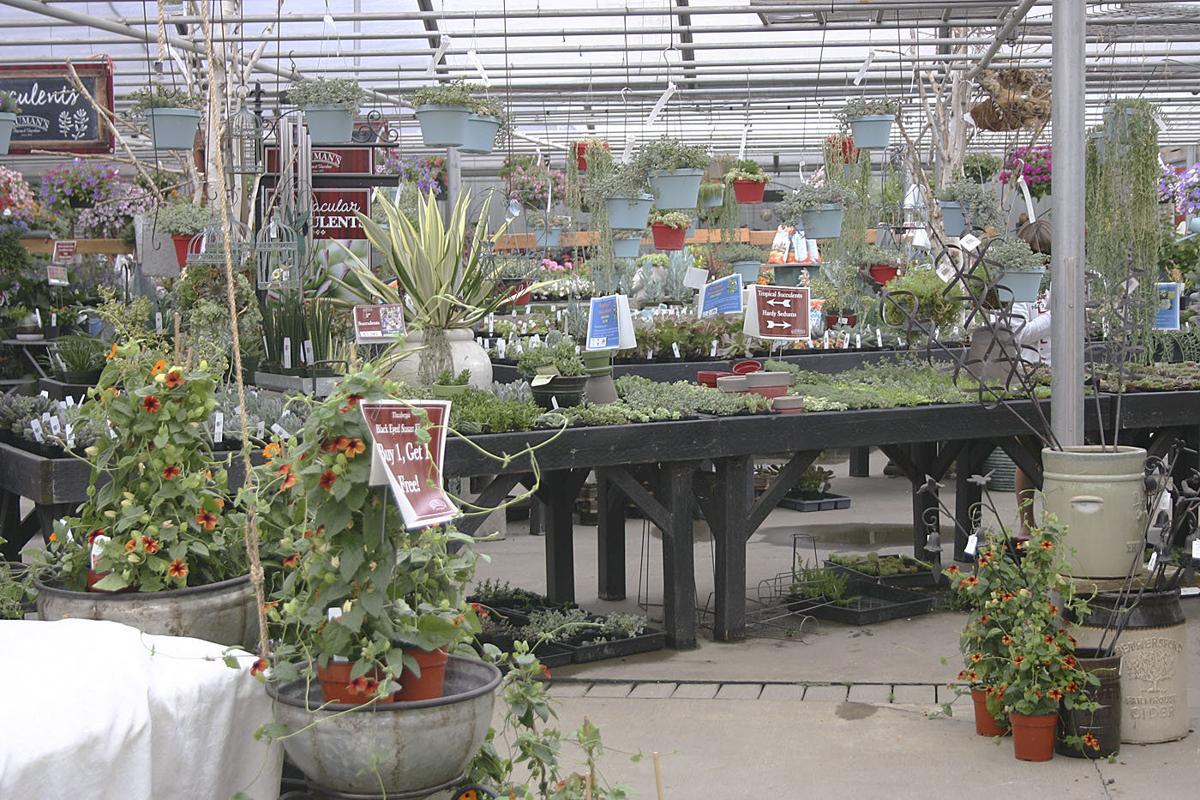 Bauman's Farm and Garden's retail nursery, where they sell plants and garden decor. 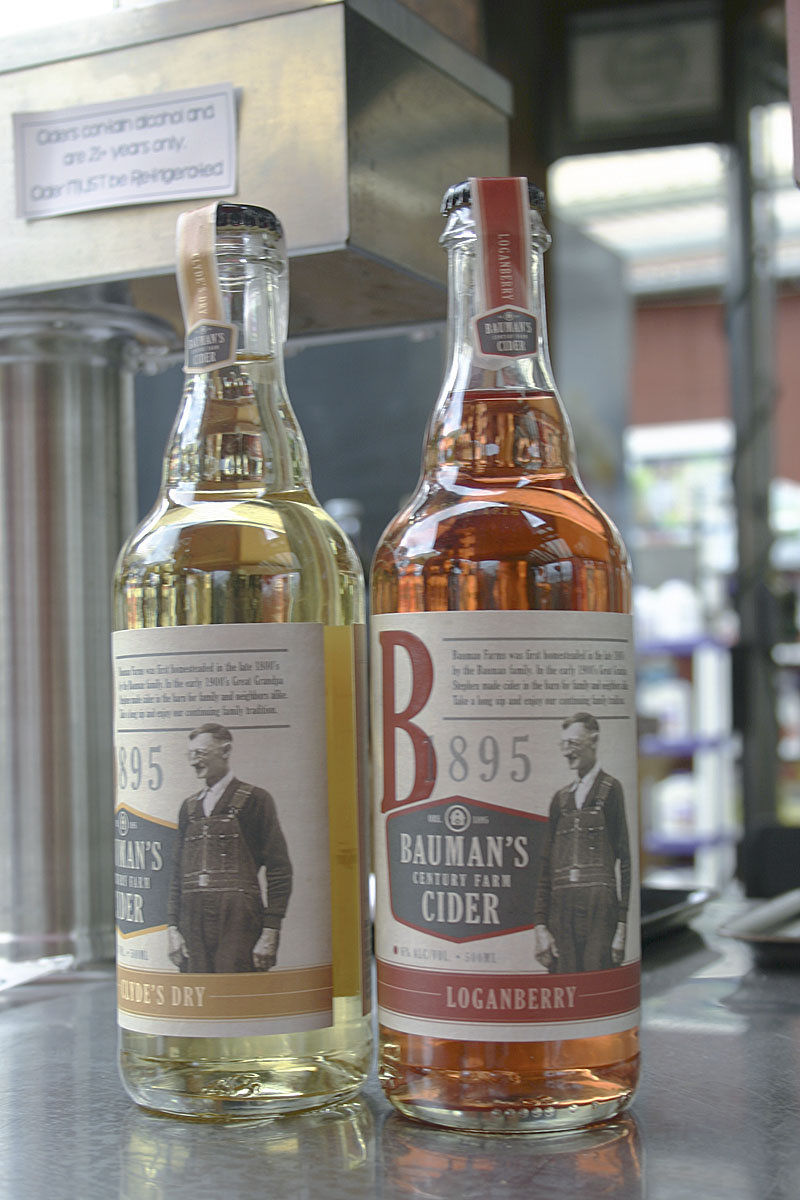 Two years ago Bauman's Farm began a hard cider company to further diversify the business. On the bottle's label is a likeness of Brian Bauman's great grandfather. 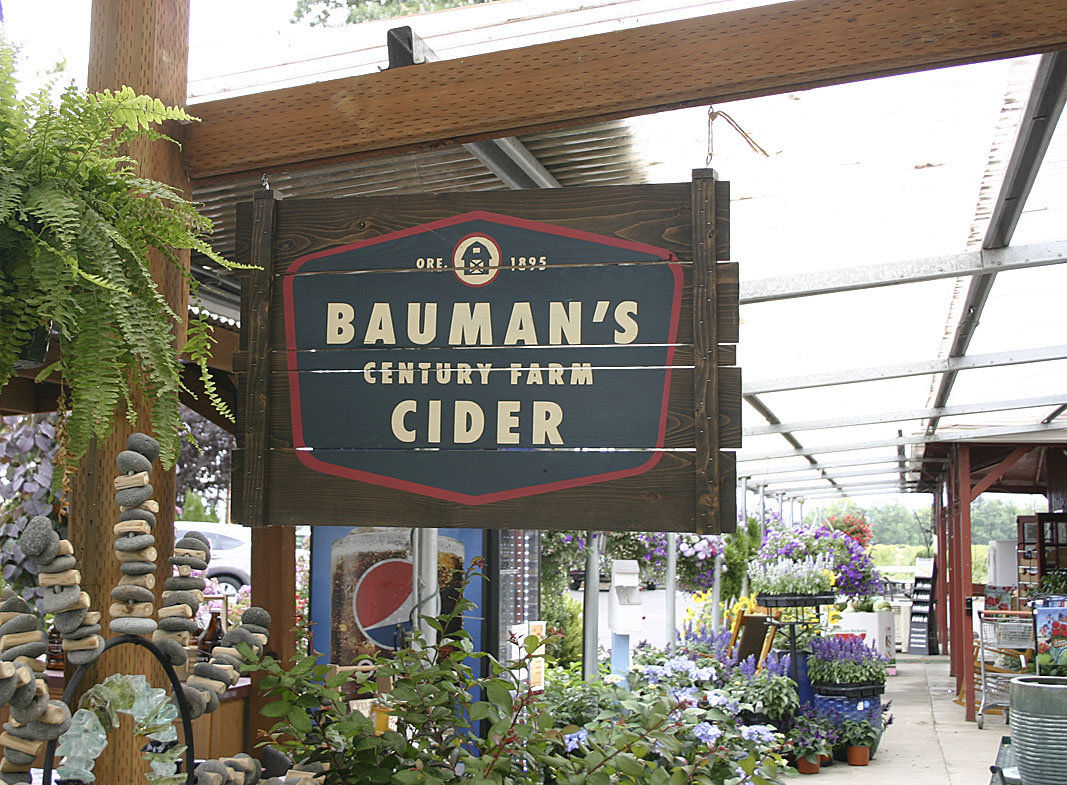 The farm's cider company was started two years ago and is expanding rapidly, Brian Bauman said.

A hay ride is one of many activities farms offer as they get involved in agritourism.

Brian Bauman is the great grandson of the founders of Bauman's Farm near Gervais, Ore. The farm's current agritourism operation began with his second-grade class when it took a field trip to the farm to get pumpkins.

Bauman's Farm and Garden's retail nursery, where they sell plants and garden decor.

Two years ago Bauman's Farm began a hard cider company to further diversify the business. On the bottle's label is a likeness of Brian Bauman's great grandfather.

The farm's cider company was started two years ago and is expanding rapidly, Brian Bauman said.

GERVAIS, Ore. — White wooden-block letters on the side of a large red barn near this small town in Oregon’s Willamette Valley spell out the name of one of the state’s most popular agritourism destinations.

Bauman’s Farm and Garden isn’t at a busy urban intersection or along an interstate highway. Rather, it’s on Howell Prairie Road, a two-lane that meanders through the east side of the valley. “Our location is our greatest disadvantage because we are on the way to nothing. There is no reason you would be driving by Howell Prairie Road unless you were like, ‘I need to take the back road to Mount Angel,’” another small town down the road, said Brian Bauman, the farm’s general manager.

While that may be true, Bauman’s has grown from a small roadside stand into an agritourism hub in the last 30 years. The large red barn houses a retail store for fresh fruit and vegetables, baked goods, candles, honey, a coffee shop and other items. There is also a nursery operation and a hard cider company, and every fall the farm hosts its annual harvest festival, pumpkin patch and other family-friendly activities.

As guests enter the red barn, the smell of bread and other fresh-baked goods lingers in the air from the bakery in the corner. Looking around, visitors see fresh produce, pickled veggies and canning supplies in every direction.

“We want the experience to feel authentic, we want them to feel like they are a part of the farm and the farm’s operation,” Bauman said.

Bauman’s Farm and Garden is one of a growing number of agritourism operations across the West. The farmers who go into agritourism — it can range from a farmstand to a U-pick fruit orchard to a pumpkin patch and a full-blown harvest festival — also see it as more than a way to bolster their bottom lines. They see it as a way to help the public gain a better understanding of agriculture.

The 2012 Census of Agriculture — the most recent available — reported an income of over $15 million from agritourism in Washington state, and Idaho had just over $5 million. Oregon brought in over $10 million, and California topped them all with nearly $38 million in agritourism income.

Nationally, the sector makes up 3.8 percent of agricultural income, based on the 2012 census, which reported over $704 million in agritourism income across the U.S.

However, while the USDA does track the agritourism numbers in the census, experts say the definition the agency uses is too narrow.

“People spend a lot of money visiting farms and having experiences there. That is not captured by the (USDA) data,” Lisa Chase, a professor at the University of Vermont Extension and the director of the Vermont Tourism Research Center, said.

Currently the direct sales numbers for agritourism leave out value-added products, she said. In other words, only apples would count in the direct sale numbers, not a secondary product like cider, even if the farm produces it with its own apples.

Mary Stewart, an agritourism specialist for the Oregon State University Extension, along with other experts, is trying to get USDA to adopt a wider definition of agritourism.

Farm-direct sales are the most important, Stewart said. This includes selling crops directly to consumers, such as at a farmstand.

For Bauman’s, this would include the big red barn. For other farms, it might just include a small vegetable stand on the side of the road.

The next category is education, which includes activities such as workshops to learn how to make jam with the farm’s berries, Stewart said.

Bauman’s hosts about 8,000 school kids every year during field trips as a part of its education component. The kids learn how to make apple cider, and learn about the many different types of apples in the process, Bauman said. “As we drive through the farm (with the kids) we talk about the different crops and what’s growing on the farm.”

Hospitality also comes into play. Each year, Bauman’s hosts over 100,000 visitors during its harvest festival, which lasts six weekends in the fall. This can also include overnight stays at the farm or hosting farm-to-table dinners, “where a farmer opens up their field, their barn or their home and shares their knowledge and heritage,” said Chase, the University of Vermont professor.

Outdoor recreation is the fourth category. This includes activities such as hiking or bird watching, according to Stewart.

The final category, entertainment, gets a lot of hype, Stewart said, but in actuality it is only a small part of agritourism. Entertainment includes activities such as hay rides, corn mazes and live music on the farm.

During Bauman’s harvest festival and pumpkin patch every year they offer many activities for kids — everything from laser tag for the older ones to a ride on a swing attached to a zip line.

Bauman said the farm is known for its pumpkin patch and the entertainment activities that go along with it. But, he said, a big part of his job is to convince people to come out other times of the year and realize the pumpkin patch and the harvest festival are only a small segment of what goes on at the farm.

In other words, the main concept of agritourism is to connect people with farms, Stewart said, adding that in 21st century America most people are at least four generations removed from living on a farm.

Years ago, people who lived in cities would make a trip to the farm of a relative to experience the lifestyle, according to Penny Leff, the agritourism coordinator at the University of California Cooperative Extension.

“People have been visiting farms forever,” she said.

Agritourism takes the place of that relative and gives people a chance to experience where their food comes from, Leff said.

It also improves farmers’ bottom lines. Using California as an example, 75 percent of farmers participating in agritourism are increasing their revenue, she said.

Significant hurdles have arisen for agritourism over the years — including insurance liability issues and land use problems.

According to Leff, insurance is becoming easier to obtain as companies gain an understanding of what goes into these operations.

Oregon and other states have passed laws requiring agritourism operations to post warning signs in specific places around their properties that free the operators from liability, with a few exceptions.

Land use issues come up often as well. In California, for example, each of the 58 counties has different land use policies.

Leff said something that works well in one county might not work at all in another. It would be helpful if the county supervisors met and decided on a template for zoning ordinances for farmland, she said.

In Bauman’s case, “We work pretty closely with the county,” Brian Bauman said.

“In Marion County specifically … there is the 75–25 basic rule for exclusive farm use,” he said. The rule says 75 percent of their revenue has to come from farm products. The products cannot be processed, so if berries are used to make a pie, the pie is not considered a part of the 75 percent. According to Bauman, they have been able to count their apple cider as a farm product because they use whole apples and don’t do anything to it.

The economic benefit of agritourism can be important to farmers, Leff said, “I have had people tell me that the corn maze saved the farm.”

At Bauman’s, agritourism helps support the farm. However, they can’t just stop farming. About 90 percent of what Bauman’s grows on its nearly 400 acres is sold through the retail store on the farm.

“It’s not like we said, ‘Oh, agritourism is great’ and then we don’t have to farm anymore,” Bauman said. “It didn’t replace anything; it gave us another avenue.”

While agritourism is a great way to diversify, Bauman said they have a lot of activities going on at the same time and with them come different regulations. As an example, Bauman said they serve food at their harvest festival every year, including roasted squash, corn and baked potatoes. It seems simple, but to serve the food they also must have a certified commercial kitchen, he said.

While three decades as an agritourism operation seems like a long time, the Bauman family farm has been around a lot longer.

“The farm was originally started in 1895 by my great grandmother, which has always been really cool,” Bauman said. “When I was growing up in the early ’80s, my mom had my three younger sisters and myself, and (she) wanted some extra money to stay at home with us kids.”

Bauman said that’s when his mom decided to open a roadside vegetable stand.

“The original building alongside the road was it,” Bauman said.

The agritourism element didn’t really start to change things for the farm, however, until he was in grade school.

“So when I was in school we had this new little produce stand, and (my class) needed a place to go get pumpkins,” he said.

The Baumans had grown vegetable seed crops for years, so they had lots of different vegetables around. One of those vegetables happened to be pumpkins.

“My second-grade class came out here on a field trip to get pumpkins and my dad built us a little maze and stuff for all of us to go through. Then the rest of the school heard about it and they all wanted to come out, so they came out,” Bauman said.

“Those teachers from the school I was at went to other schools and all the sudden we had all these school kids coming out. Then they wanted to bring their brothers and sisters out, so they started coming out on the weekends,” he said. “Honest to goodness, that is how we got started — my second-grade class field trip.

“There was no master plan for this. We didn’t sit down one day and say we want a big agritourism harvest festival. Out of necessity we needed something and said, ‘Wow this was really fun, what more can we do?’”