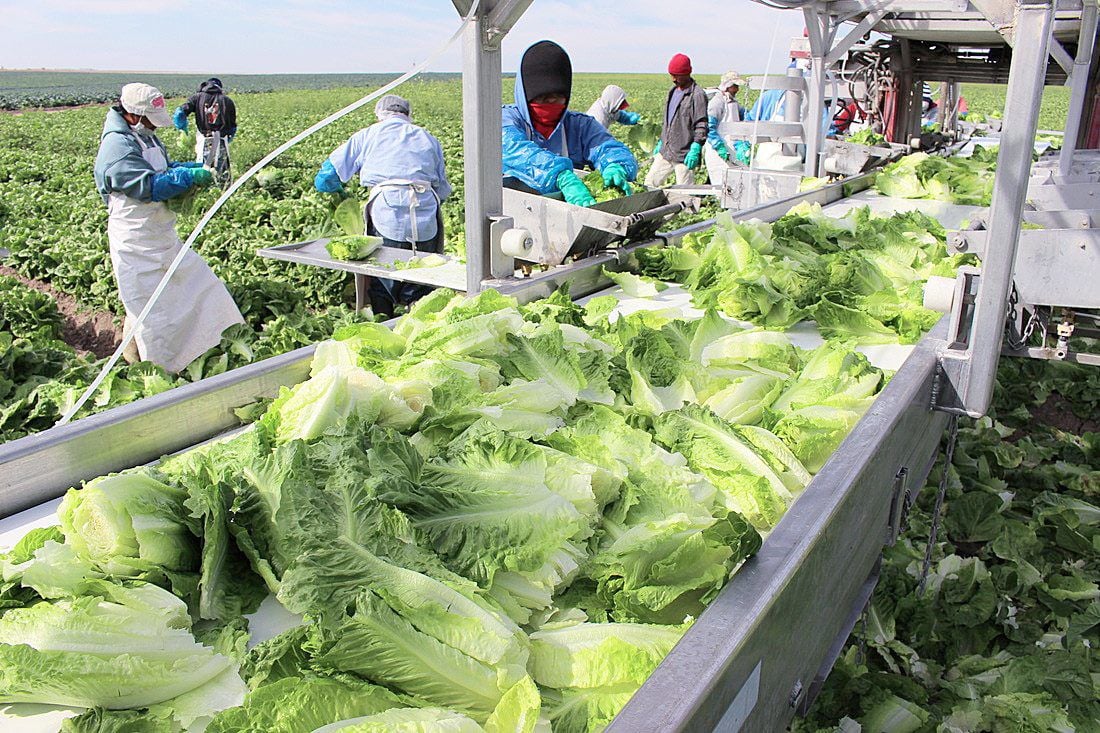 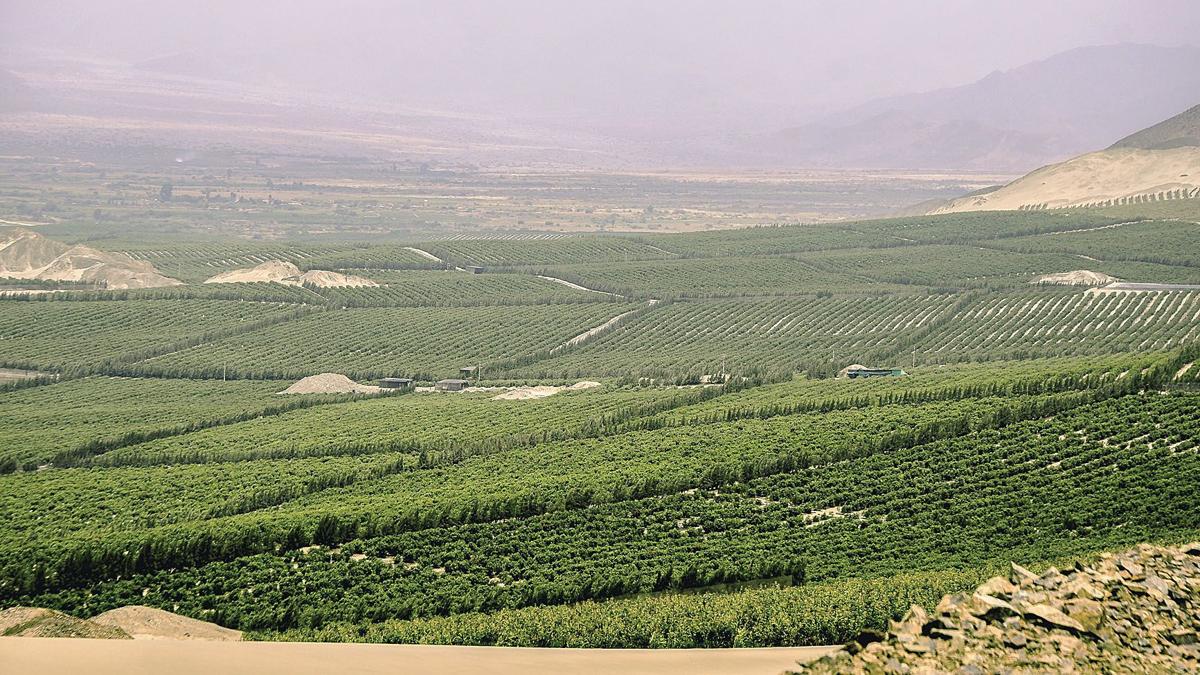 A Mission Produce Inc., Oxnard, Calif., avocado orchard south of Trujillo, Peru, Nov. 2015. Fueled by soaring U.S. consumption, avocado production has drawn parts of western Mexico out of poverty in just 10 years. But the scent of money has drawn gangs and hyper-violent cartels. 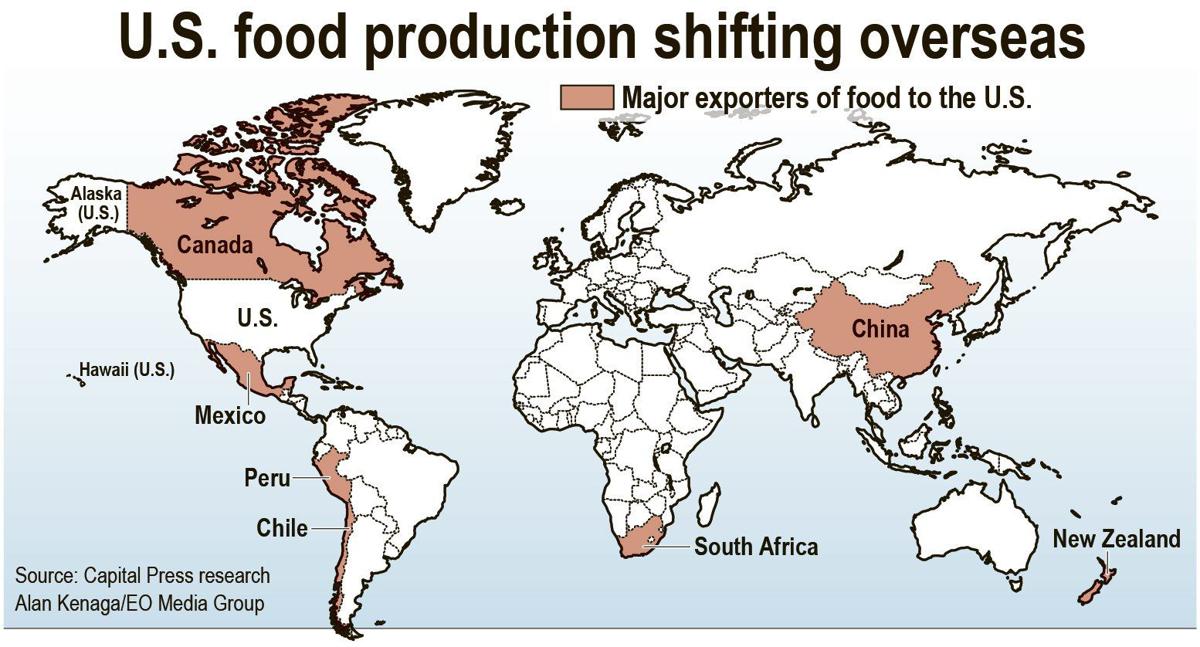 A Mission Produce Inc., Oxnard, Calif., avocado orchard south of Trujillo, Peru, Nov. 2015. Fueled by soaring U.S. consumption, avocado production has drawn parts of western Mexico out of poverty in just 10 years. But the scent of money has drawn gangs and hyper-violent cartels.

Ten years ago, Steve Scaroni looked south seven miles from his farm near El Centro, Calif., to Mexico and thought “why not farm there since it’s so hard getting legal workers here.”

One of the largest lettuce producers in the nation, Scaroni was dealing with labor shortages he knew would only worsen.

“Our workforce was aging and going to other industries. Without immigration reform there was no way to replace them,” he said.

Another large salad producer had moved to Mexico five years earlier and was “getting it done.”

In early 2006, he began renting fields, 1,500 miles to the south in the state of Guanajuato in central Mexico. It was where the other company had gone and the climate was great for year-round production.

He admits his initial business plan was flawed.

“I completely misjudged how hard it would be. Cultural differences and (lack of) work ethic,” he said. “It’s hard to find people committed to doing their jobs,” he said.

Still, he said, it was the right decision. He has workers and he doesn’t have to worry he’ll lose them in an audit by U.S. Immigration and Customs Enforcement.

Production that was on his own land in El Centro, where his Swiss-immigrant grandparents started farming in 1911, is now all in Mexico.

Scaroni, 58, is just one example of a growing trend in the past decade — U.S. farmers moving or expanding operations in other countries.

Availability and cost of labor, regulatory burdens and costs including the Food Safety Modernization Act, lack of water and pesticide issues are all factors enticing U.S. farmers overseas.

California’s San Joaquin Valley, the nation’s leading agricultural region, is in serious decline because of drought. Some 600,000 to 1 million acres will be fallow this year, 18,000 jobs lost and the state’s agricultural economy will take a $2.7 billion hit, say sources at the University of California-Davis and Fresno County Farm Bureau.

“Above 75 percent of your tomatoes come from Mexico now. We are outsourcing our food supply,” Scaroni said.

He grows strawberries in Salinas but thinks their future is in Mexico.

He’s worried about supply of food being held hostage against the U.S. “It’s a concern I’ve voiced over and over again in my lobbying efforts in Washington, D.C. I think it’s a huge concern, but it seems to fall on deaf ears,” he said.

Others aren’t so concerned.

Daniel Summer, director of the Agricultural Issues Center at UC Davis, said the U.S. produces more than it consumes in most food commodities but depends on imports and exports.

“Trade is a two-way street and will continue to be. We do not feed ourselves now. The only country that tries to feed itself is North Korea. South Korea, which imports much of its food, is far more food secure,” he said.

There is “zero” chance, he said, of the U.S. losing control of its food supply and it’s “not worth speculation.”

Andy Anderson, executive director of Western United States Agricultural Trade Association in Vancouver, Wash., said the U.S. exports most of what it grows, including huge amounts of wheat and soybeans.

“We’re a long way off from becoming food insecure. To me the bigger issue is some of the reasons we see that shift taking place. We continue to increase government regulation and make it harder and harder for farmers to run the maze of regulation. That causes people to go to other countries,” Anderson said.

But Scaroni doesn’t think it’s unrealistic to consider the U.S. losing even grain and forage dominance.

“Brazil is big in soybeans. There’s no law that says we get to keep it all. We compete in a worldwide economy,” he said.

He sees lack of labor, regulatory costs and drought as major factors in an increasing shift of production to overseas. It would be even greater, he said, were it not that so many companies have large, fixed-asset facilities in the U.S.

“Our automotive industry down in Mexico is going crazy. Proctor and Gamble has a big plant less than three years old. I’m concerned, yes. If we don’t wake up, we will export our production base,” he said.

Mexico is not the total answer, he says, because it has water problems on top of less productivity and higher equipment costs.

Western Growers, Irvine, Calif., represents fresh produce farmers in California, Arizona and Colorado. In 2007 and again in 2011 in building a case for immigration reform, it surveyed some of its members on their movement out of the country.

The organization argues immigration reform will ease chronic shortages of seasonal agricultural workers which is one of the factors driving U.S. farmers overseas.

Tom Nassif, Western Growers president and CEO, helped craft an immigration bill that passed the Senate in 2013 but stalled in the House. He said immigration reform needs to happen if the U.S. wants to feed itself without being “dependent on foreign countries that may not like us and use food as a leverage point.”

Nassif warned if immigration reform fails, the exodus of vegetable producers from the American Southwest to Mexico, Latin America, the Middle East, South Africa and China will accelerate.

In its survey, Western Growers found that 27 of its member companies were farming almost 114,000 acres and employing more than 23,500 workers outside the U.S. They were growing 25 crops including asparagus, avocados, berries, melons, lettuce, greens, peppers, beans, tomatoes and broccoli. Overall, they represented a potential loss of nearly $1 billion annually in direct economic activity for California.

Most of the exodus was to Mexico, chiefly the Baja Peninsula, the San Luis and Mexicali valleys and the Guanajuato and Sonora areas.

True numbers were greater because the survey did not include all growers who had moved operations out of the U.S., the report said.

Hank Giclas, senior vice president of science and technology at Western Growers, said the survey has not been updated but that the numbers are greater now.

“More (food production) seems to be shifting out of California than I’m comfortable with,” Giclas said.

“I look at California as the epicenter for fresh fruits and vegetables in the U.S. and world. I see people closing up shop and moving to other areas. I’ve seen it through the course of my career (25 years at Western Growers). It’s disheartening and we have to think about potential impact on prices and availability if we are not masters of our destiny, so to speak.”

Mission Produce Inc. of Oxnard, Calif., is a global grower, packer, shipper and marketer of avocados. It has ripening facilities across the U.S. and distributes in North and South America, Europe and Asia. It packs about 25 percent of California’s crop and has production partners in Mexico, Peru, Chile and New Zealand.

The company is building what it believes will be the world’s largest avocado packing plant in Chao, Peru.

“Demand has increased markedly around the globe and Peru is a good fit for various markets during the May through August period,” said Robb Bertels, vice president of marketing.

The company owns production, packing and distribution facilities in Peru, which “keeps us close to the product and offers efficiencies throughout our distribution system,” Bertels said. “Our focus on Peru is not related to labor or costs. It is more related to securing supply for our global customer base.”

Alan Schreiber, administrator of the Washington Asparagus Commission, is most bothered when domestic production is lost as a result of government policy.

From 1990 to 2010, an act of Congress caused the U.S. to lose two-thirds of its domestic asparagus production.

The fresh asparagus sector also suffered but remains, as does some pickled and frozen processing.

“If you are not self-sufficient in food, it increases your vulnerability,” he said. “If you put a naval blockade around Japan it would have to surrender because it imports so much of its food it would starve to death.

“If we lose our production it will be to lower-cost producers that don’t have strong regulatory systems, and how good will their food safety be?”

Asparagus is a good example of the migration of U.S. food production offshore, what Desmond O’Rourke, a retired Washington State University agricultural economist and private consultant, calls a “creeping problem.”

“Thirty years ago, California had a monopoly on table grapes. Now it shares the market with Chile and Peru is coming in,” he said. “Chile can deliver a Granny Smith apple to Philadelphia as cheaply as we can (in Washington) because of lower production costs.”

Giclas, of Western Growers, said he doesn’t think the U.S. is in danger of losing its secure food supply anytime soon, but the nation needs to recognize the importance of maintaining a strong and vibrant agricultural industry.

“We can grow the best crops in the world, but we need labor and water and the regulatory environment conducive to it,” he said. “As pressure is put on growers, they look elsewhere to see if there is someplace they can do it better.”