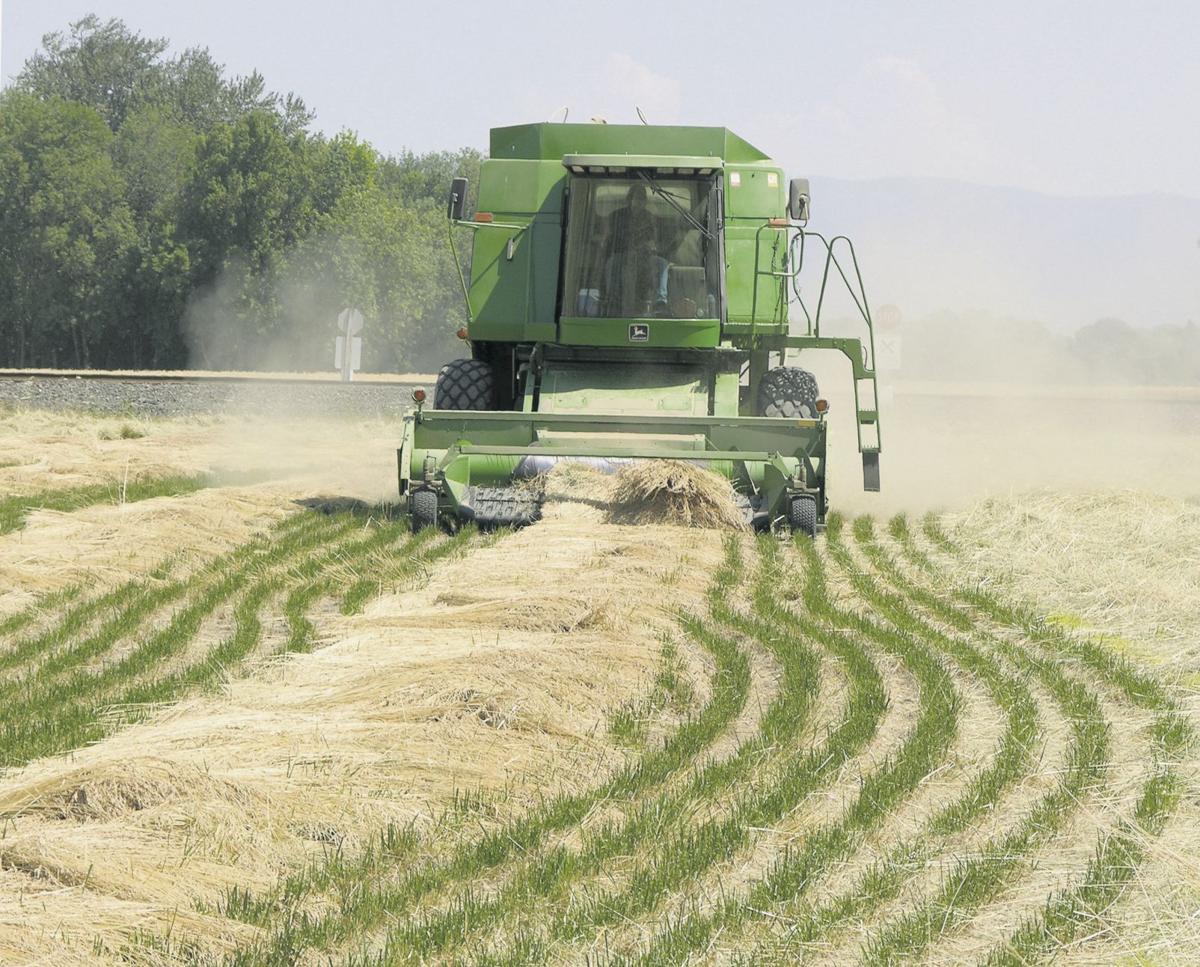 Grass seed is harvested in a Willamette Valley field. The Association of Equipment Manufacturers reports double-digit declines in large tractors and combines through mid-2016, following similar declines in 2014 and 2015. 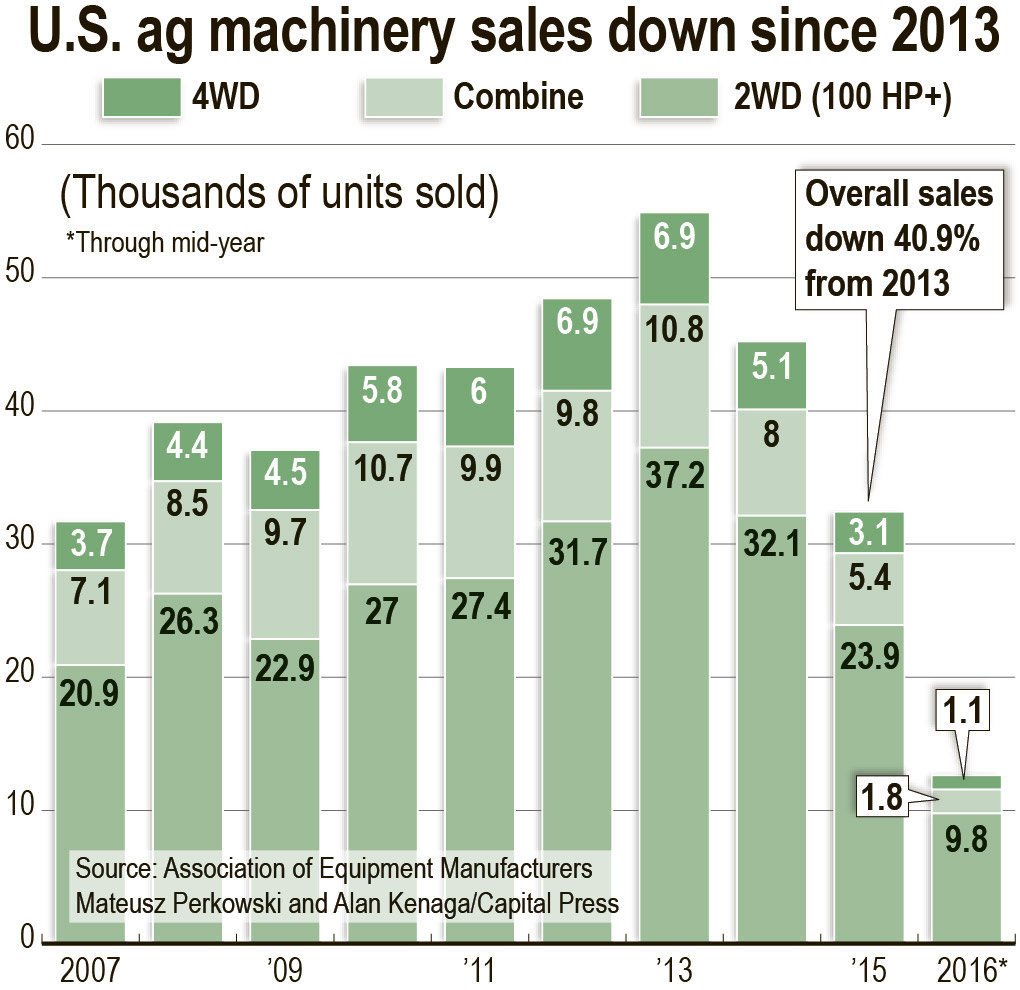 Grass seed is harvested in a Willamette Valley field. The Association of Equipment Manufacturers reports double-digit declines in large tractors and combines through mid-2016, following similar declines in 2014 and 2015.

The continuing downturn in farm machinery sales is leaving sellers with surplus inventories and forcing some to offer equipment at money-losing prices, experts say.

As farmers have “pulled in their horns” due to lower commodity prices, new large tractors and combines are moving off dealer lots at a slower pace, said Charlie O’Brien, senior vice president at the Association of Equipment Manufacturers.

Even when farmers want to buy new machinery, dealers can encounter obstructions to the sales process, he said.

Dealers already have large inventories of used, high-quality tractors and combines, so many are reluctant to accept more trade-ins of used machinery, O’Brien said.

Fleets purchased new several years are coming up for auction at a time when demand has dried up for late-model, high-tech tractors and combines, said Steve Sparks, sales manager of Nyssa Tractor and Implement in Nyssa, Ore.

“Some people are selling that stuff at a serious loss,” he said.

Meanwhile, farmers who need additional machinery are still looking for older, reliable machinery that’s less sophisticated, Sparks said. “It may not be as fast and it may not be as fancy, but at the end of the day, it still does the same job.”

The upside is that manufacturers are now better prepared financially than they were a couple years ago, when sales were expected to stay strong, he said.

“A lot of these very difficult adjustments have now been made,” O’Brien said.

Farmers were spending an average of 22 to 23 percent of their crop revenue on farm machinery during the boom years leading up to 2013, after which sales began to drop, said Michael Swanson, chief agricultural economist for Wells Fargo Bank.

Machinery sales still aren’t as depressed as during the farm downturn of the 1980s, when growers devoted as little as 8 percent of crop revenues to equipment purchases, Swanson said.

The decline should have been predictable after several years of surging sales, Swanson said.

Among row crop farmers, there’s a “huge gap” between strong financial performers and weak ones, so some farmers are still in a position to take advantage of good deals for machinery, Swanson said.

Meanwhile, financially troubled growers may be compelled to sell off machinery purchased during the boom years to meet cash flow needs, said Michael Langemeier, an agricultural economist at Purdue University who has studied machinery.

However, commodity prices are expected to remain low for several years, likely suppressing large investments, he said. “Many farmers are very leery of using that working capital to buy machinery.”

Farmers in the Northwest who grow small grains, hay and potatoes haven’t escaped the financial downturn experienced by those in the Midwest, where incomes are often tied to corn prices, said Bob Boyle, regional vice president for Northwest Farm Credit Services.

Cattle and dairy producers are also under stress, he said. “We’re seeing compressed profits in ag across the board.”

Some sectors, like nursery and grass seed, are nonetheless performing adequately, Boyle said.

Machinery manufacturers also have a bright spot in their business: Sales of small tractors under 40 horsepower are up nearly 13 percent in 2016 and demand has grown steadily after plummeting during the recession, according to AEM.

These smaller machines are often bought by specialty crop producers, and while they don’t generate as much revenue per unit, their impact shouldn’t be discounted, said O’Brien. “It’s still an important sector overall.”

Trump administration: States too eager to sue over NEPA rule

Marty Myers remembered as a pioneer of sustainable agriculture