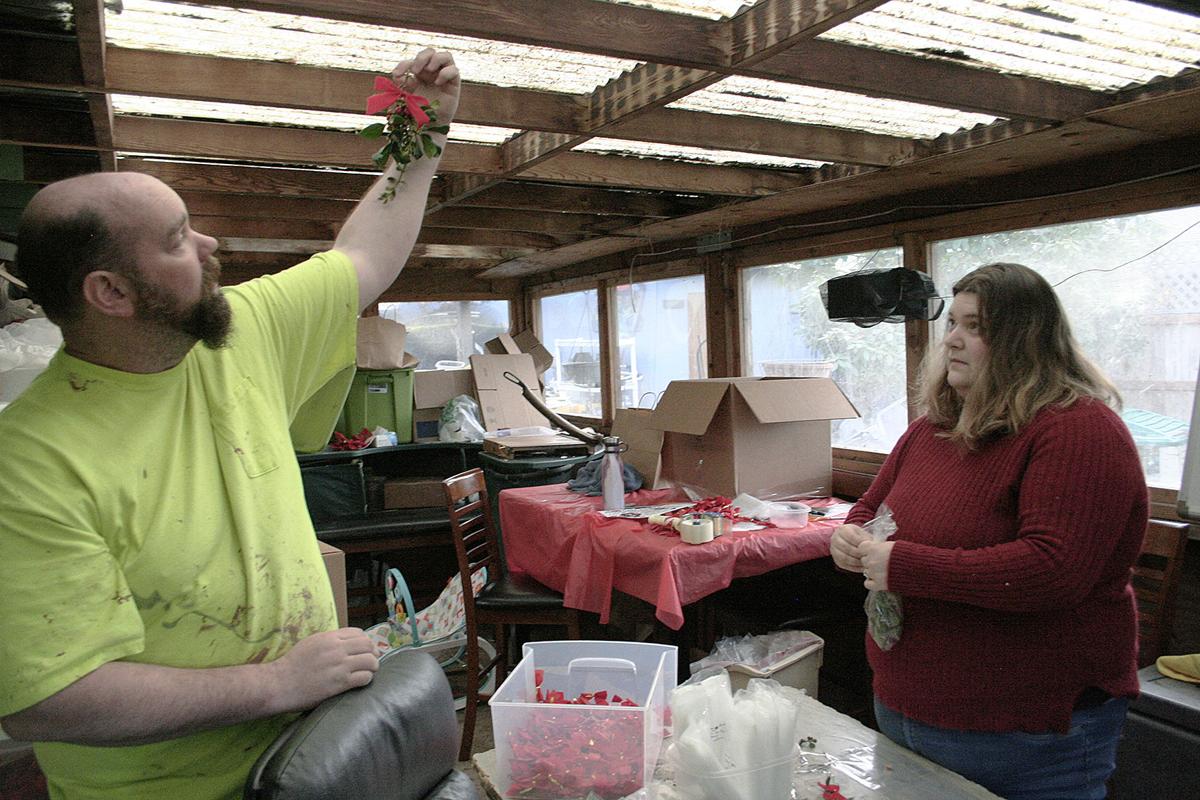 Garrett Huggins and his wife, Ashley, prepare mistletoe for sale. 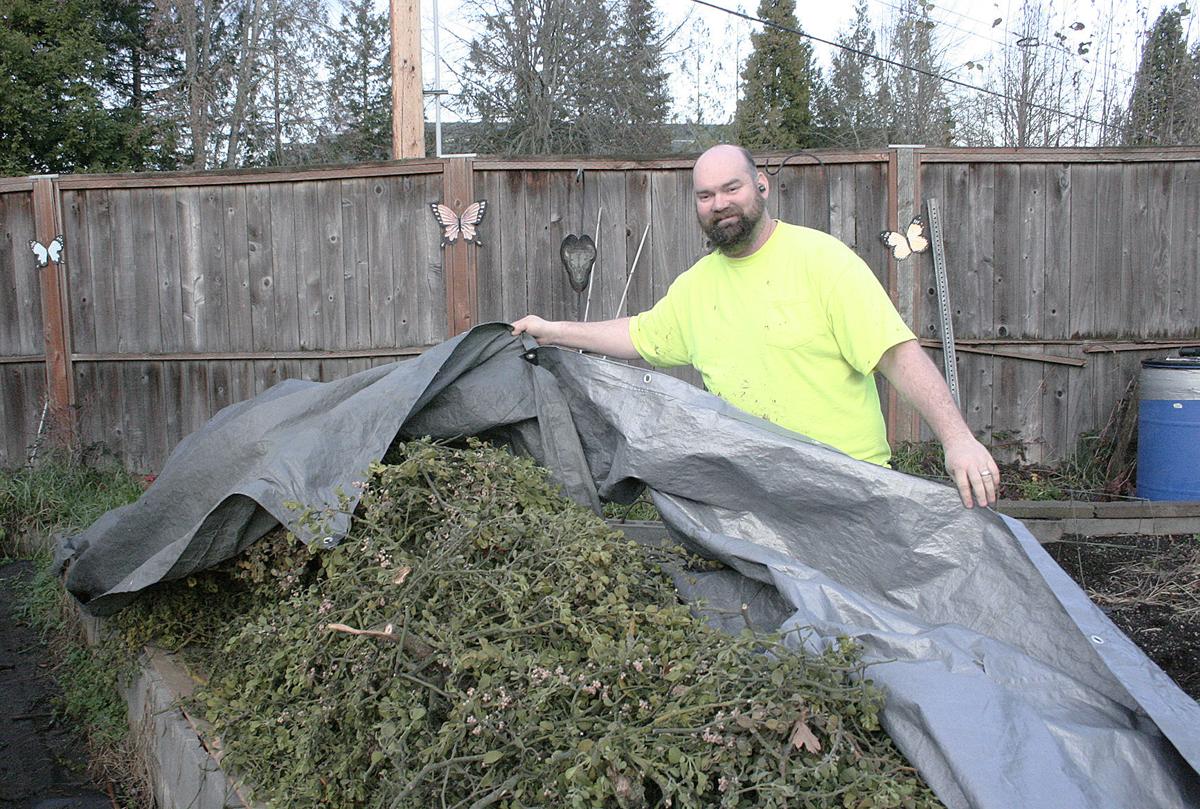 Garrett Huggins shows off a pile of mistletoe that he collected from a family member’s property in Southern Oregon. His company, Genuine Oregon Mistletoe, has been operating for more than a decade. 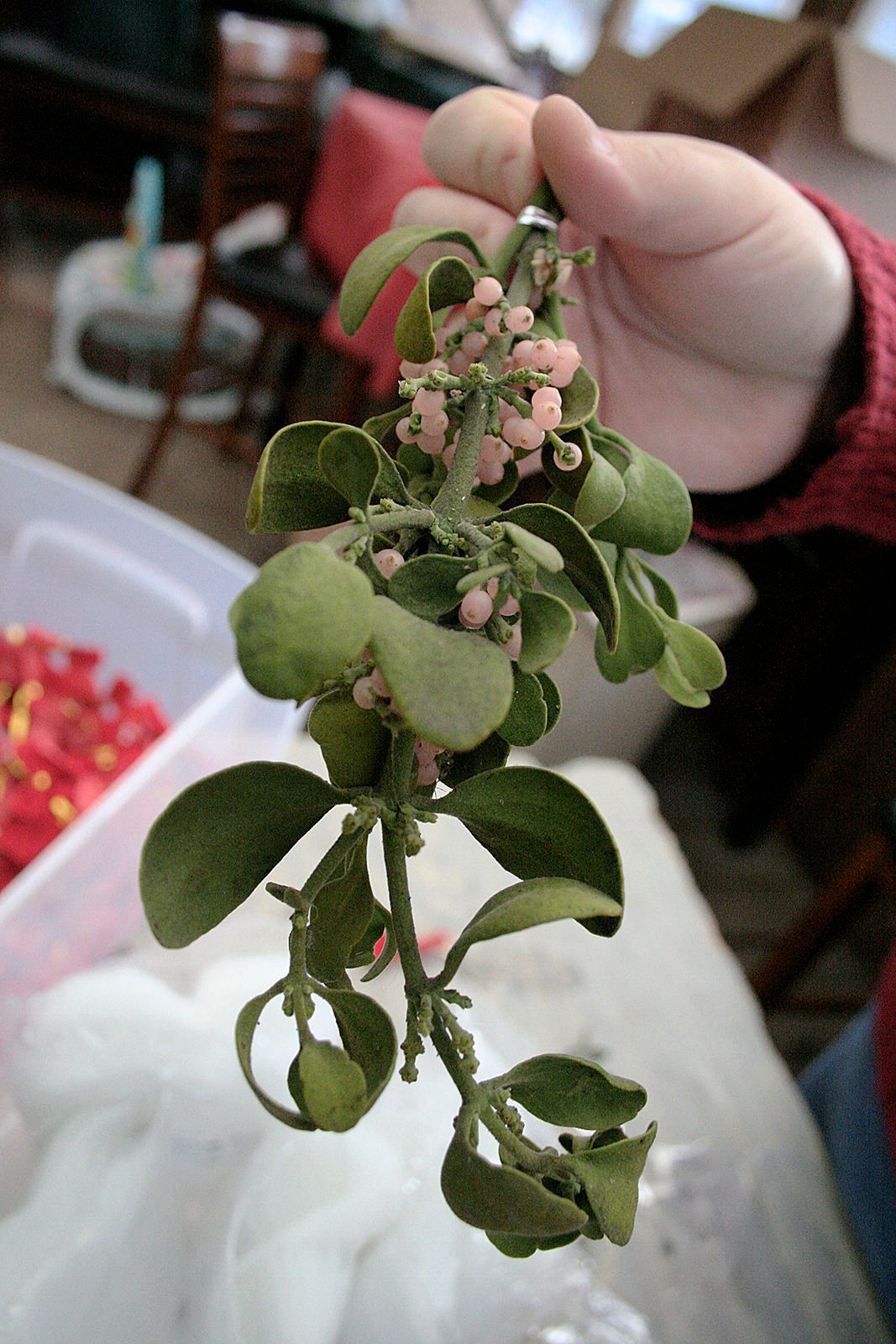 Ashley Huggins holds a bundle of female mistletoe that contains berries of the parasitic plant. Mistletoe is harmful to individual trees but serves a valuable ecological purpose. 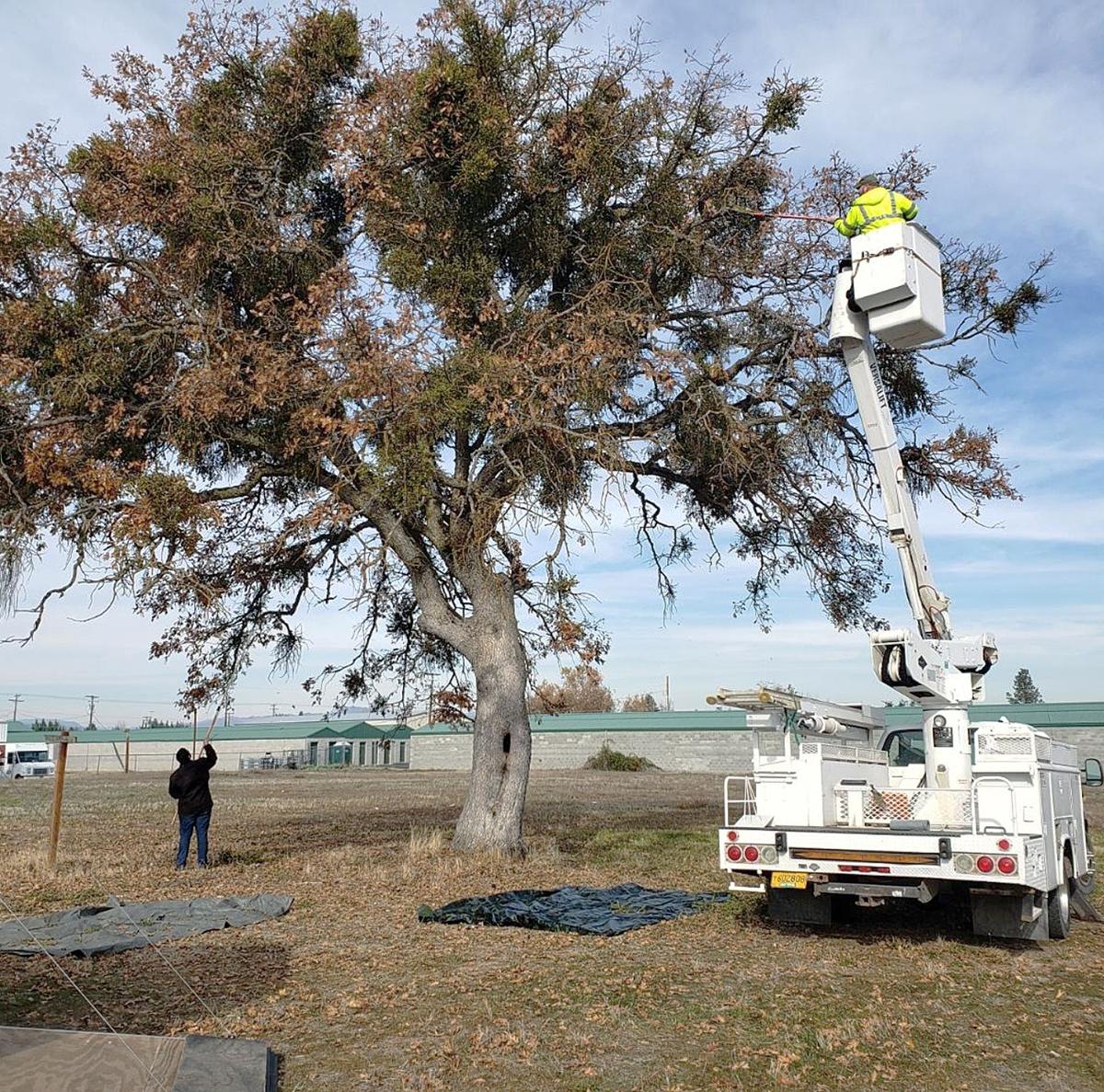 Garrett Huggins collects mistletoe from an infected oak tree in Southern Oregon with a truck equipped with a boom crane. 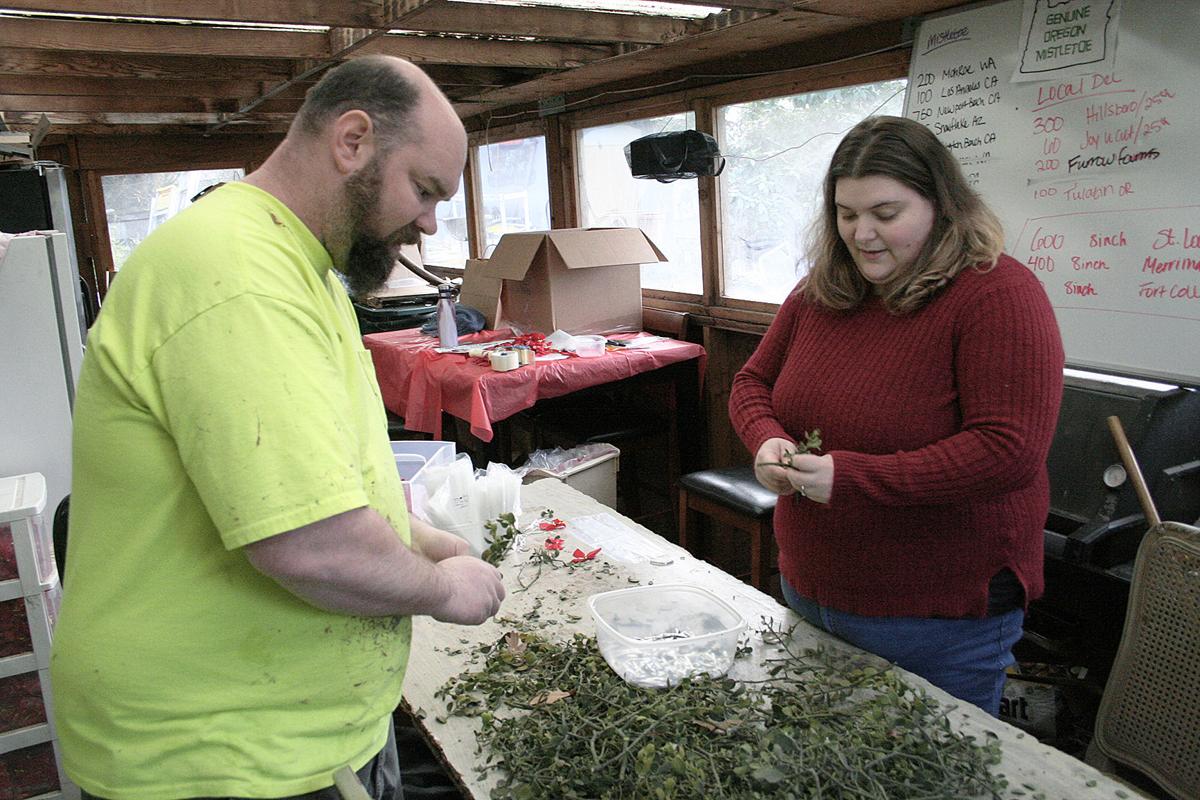 Garrett Huggins and his wife, Ashley, prepare bundles of mistletoe for sale to retailers around the U.S. Their company, Genuine Oregon Mistletoe, has been operating for more than a decade.

Garrett Huggins and his wife, Ashley, prepare mistletoe for sale.

Garrett Huggins shows off a pile of mistletoe that he collected from a family member’s property in Southern Oregon. His company, Genuine Oregon Mistletoe, has been operating for more than a decade.

Ashley Huggins holds a bundle of female mistletoe that contains berries of the parasitic plant. Mistletoe is harmful to individual trees but serves a valuable ecological purpose.

Garrett Huggins collects mistletoe from an infected oak tree in Southern Oregon with a truck equipped with a boom crane.

Garrett Huggins and his wife, Ashley, prepare bundles of mistletoe for sale to retailers around the U.S. Their company, Genuine Oregon Mistletoe, has been operating for more than a decade.

After more than a decade in business, Garrett Huggins doesn’t aspire to become a mistletoe magnate.

Huggins is content to earn most of his income as a union carpenter while selling the wild-harvested holiday crop through his family’s company, Genuine Oregon Mistletoe, as a sideline.

“We don’t expect it to become a million-dollar company, but it does make Christmas happen for us, you know?” he said.

Though they get plenty of help from friends and family, Genuine Oregon Mistletoe is basically a two-person operation: Garrett collects the mistletoe from oak trees in Southern Oregon while his wife, Ashley, handles the marketing.

Both help tie strands of the leafy perennial into bundles with ribbon and package them for shipping.

“When people call, they talk to me,” Ashley said. “He didn’t want to deal with the customer service side of things.”

The Hugginses are similar to other mistletoe entrepreneurs in Oregon, where the parasitic plant commonly infects oak trees. They see it as a fun yet frantic way to earn extra money in the weeks leading up to the holidays.

Genuine Oregon Mistletoe is run as a wholesale operation, selling about 10,000 bundles of mistletoe a year to nurseries, Christmas tree lots, Boy Scout troops and other holiday retailers around the U.S.

The company has grown more sophisticated over time.

Ashley’s uncle built a website that’s made Genuine Oregon Mistletoe more prominent than in the early days, when it was dependent mostly on word-of-mouth.

Meanwhile, Garrett’s uncle lends him a truck equipped with a boom crane so he no longer has to endanger life and limb climbing ladders to the upper reaches of oak trees on a family member’s farm in Southern Oregon.

“I don’t want to risk it, because if I were to get hurt, that would affect my full-time job,” he said.

For smaller-scale mistletoe sellers, blasting the plant out of a tree with a shotgun is often the preferred method of harvest.

In their early years of collecting mistletoe, Janey Lee-Sutton and her grandson borrowed a 12-gauge shotgun from the farmer who owned the infected oak trees, but she eventually bought herself a smaller caliber .410-gauge.

The idea of selling mistletoe was sparked by a request from her grandson, Malachi, who was then 4 years old, to buy Christmas presents for their family.

Since he didn’t have any money or a job, Lee-Sutton decided that selling mistletoe at a nearby grocery story would be a good learning opportunity.

Malachi borrowed some money for baggies and ribbons, which he later repaid his grandmother while pocketing the profits.

“I wanted to teach him a bit of economics,” she said.

Once the boy grew older and took a gun safety course, Malachi helped with the shooting but discovered that growing older also has its disadvantages.

“He started noticing that as he was bigger, people wouldn’t buy as much, so he started to bring his little sister,” Lee-Sutton said.

With his younger sibling, Miko, serving as the public face of the operation, sales rebounded, and they ended up earning as much as $400 per year.

Malachi outgrew the mistletoe business once he became a teenager — he’s now a high school football player — and the farmer who provided access to the mistletoe died, with his family selling off the property.

“It was a great bonding experience for me and my grandchildren,” Lee-Sutton said.

While the mistletoe operation run by Trillium Gardens is considerably larger, annually selling about 700,000 bundles through a distributor, it’s also not the main business for the native plant nursery based in Eugene, Ore.

Owner Sheila Klest began selling mistletoe about two decades ago and now collects “thousands of pounds” a year from oak trees up to 100 miles from the nursery, with the permission of the landowners.

“It’s at least a semi-truck load but probably a lot more than that,” she said.

When harvesting such massive amounts of the plant, Klest has found it’s most efficient to hire people to climb the trees. Though they’re strapped into harnesses, it’s still a precarious proposition that requires skill.

“Oak trees can be kind of dangerous to climb because you can’t tell if a limb is rotted through or not,” Klest said.

The plant can be difficult to handle, as it’s fragile and gets moldy easily, and not everything collected is of salable quality, since its leaves can get sun-burned or drought-stressed, she said. Finding the best locations for optimal harvest also requires a certain expertise.

“Not every oak tree is going to have mistletoe, or not very much,” Klest said. “You get a sense of what to do and how to handle it.”

Though the harvest and preparation of mistletoe bundles is “intense” work that requires a “hard and fast” pace due to the short duration of the sales season, Klest said it’s also become a jovial holiday tradition for her company.

“It’s almost like a social thing sometimes,” she said.

The company that distributes Klest’s mistletoe, FibreDust, is primarily in the business of selling agricultural soil media made from coconut coir, or fiber, but realized it can also use its reach and expertise to sell mistletoe.

The bundles are shipped to independent garden centers, major retailers such as Trader Joe’s and Walmart, and sold online through Amazon, said Andy Pidgeon, marketing director at FibreDust.

Demand for mistletoe is stable but slowly growing, he said. “It’s been very consistent with an upward tick each year.”

Prices for mistletoe vary according to who sells it and the amount being sold. The Hugginses, for example, sell bundles for about $2 each but offer a 30-cent discount for orders of more than 100 bundles.

In Oregon, mistletoe is collected from oak trees that it naturally infests, but in Europe, a related type is actually grown and harvested from fruit orchards, said Dave Shaw, a professor and forest health specialist for Oregon State University’s Extension Service.

Apart from its potential for holiday profit, mistletoe plays a “Dr. Jekyll and Mr. Hyde” role in the natural world, Shaw said.

For individual oaks, infected limbs will become stressed and eventually die back, particularly during periods of drought when mistletoe consumes the scarce water absorbed by the tree’s roots, Shaw said. At a certain point, trees get so overcome by the parasitic plant that it can no longer be pruned away without killing them.

“We believe there is a point you will have too much mistletoe in the crown, to the detriment of the tree,” he said.

On the other hand, mistletoe berries and insects attracted to the plant serve as food for western bluebirds and other avian species, with the plant basically forming a microhabitat that improves biodiversity, he said.

“The flip side is when you get the wildlife biologists involved, they see it as a wildlife creator,” Shaw said.

Though mistletoe has figured in folklore since pagan times, scientists still haven’t deciphered many questions about the plant — for example, why it flowers in summer but doesn’t produce berries for more than a year, in the autumn of the following year, he said.

Mistletoe-infected tree branches that fall to the ground can pose a threat to livestock, which can develop gastrointestinal problems and abort pregnancies, said Shelby Filley, livestock and forage specialist with OSU’s Extension Service.

“Sometimes animals are weird and they eat stuff, and you don’t know why exactly,” Filley said.

Most likely to be affected by mistletoe toxicity are cattle, horses and goats, possibly because there’s “something lacking in their diet that they’re craving,” or because they’re simply hungry, she said.

When releasing livestock into unfamiliar pastures, it’s a good idea to give them nutritious feed so they’re not tempted to experiment, Filley said. “That way, they’re not indiscriminate about eating things. They’re cautious about what they eat.”

For the Huggins family, the mistletoe business has involved negotiating other hazards — such as learning to avoid unreliable buyers who eventually stiff them on payments.

“When you’ve never run an online business, you learn as you go,” said Ashley.

On the whole, however, they appreciate the opportunity to turn a parasitic plant into a money-making enterprise they approach with an artistic flair, interweaving strands of mistletoe with sprigs of holly.

“They all have a personal touch to them,” Garrett said.

“It’s kind of like flower-arranging but with mistletoe,” added Ashley.

Though mistletoe is now commonly associated with the Christmas holidays, the plant’s role in seasonal rituals predates Christianity.

The ancient druids, for example, would harvest mistletoe with a golden sickle and catch the strands in white cloth before they hit the ground, thereby protecting their supposedly "magical" properties.

In ancient Rome, two white bulls were sacrificed during mistletoe harvest, and the plant was believed to restore fertility when mixed with drink, according to the Roman natural philosopher Pliny the Elder. These rites are one explanation for the plant’s association with kissing.

According to Norse mythology, the god Baldr was shielded from harm from any plant that grew in the ground. However, because mistletoe doesn’t grow from the soil, the malicious god Loki arranged to have Baldr killed with an arrow or spear made of mistletoe.

When Badr was eventually resurrected in some versions of this tale, his mother, the goddess Frigg, was so overjoyed that she declared that mistletoe symbolized love and peace.

Couple reflects on 60 years on the farm without a fight