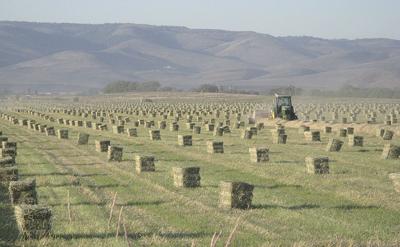 Compared to Oct. 25: All grades of Domestic Alfalfa firm as harvest is coming to an end. Timothy for export remains slow. Trade remains slow to moderate this week. Demand remains good from dairies. Feed store/retail steady. All prices are dollars per ton and FOB the farm or ranch unless otherwise stated. Delivered prices include freight, commissions and other expenses.

Compared to Oct. 25: Prices trended generally steady compared to last report's prices. Retail/Stable type hay remains the most demanded hay. Some hay acreage has been changed over to grow hemp this year. All sales in this report are 2019 crop year hay.

Compared to Oct. 25: Utility/Fair Alfalfa steady in a light test. Trade slow to moderate with good demand for feeder hay. Retail/Feed store not tested this week.

Compared to Oct. 25: Trade activity moderate on moderate demand. According to report contacts, yesterday in Region 6 had its first frost. According to the NASS Crop Progress report for Oct. 28 corn harvest was completed for Fresno, Kings and Tulare counties. Alfalfa and Sorghum continued to be harvested. Cotton harvest was in full swing. Late black-eyed peas plantings were being harvested. Early fall-planted small grains continued to be planted and were emerging well. Rice harvest was coming to a close in the Valley. In Sutter County, corn harvest was progressing well. Harvesting of sunflower was completed. Hay is reported FOB the stack or barn unless otherwise noted.

The following are the counties included in each region: