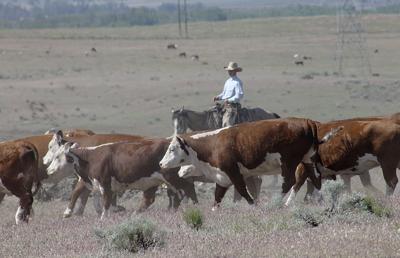 Compared to last week: Steers and heifers sold 2.00 to 7.00 higher. Demand for yearlings and calves improved throughout the week as the CME Cattle Complex found a support level and Feeder Cattle is now trading higher than levels “pre-fire.”

The cattle feeders’ psyche was boosted by these indicators after they were left reeling from the recent devaluation of cattle. The drain of capital from cattle feeders has been extreme and they have struggled all summer long to achieve profitability.

Surprisingly, the feeder cattle market is active at the auctions as outgoing fed cattle continue to lose money as fed cattle hover on both sides of the 100.00 mark. Most lots of yearlings are coming off the copious amounts of summer grass that has been available all summer.

Several consignments have been selling lighter than last year due to the “washy” pasture grass that causes cattle to weigh up with a lighter flesh and compensatory gain will be a new buyer’s best friend. As grass has been abundant, and no frost yet, there has been no need to pull yearlings off grass and get them sold before they start to lose pounds without supplemental feed. These feeder cattle producers aren’t anxious to sell cattle yet as they hope for a continued rally that will leave them with a positive return on their investment they have made.

Fall officially starts on Monday, however, the fall runs have not. The amount of forage available this summer and early fall have left many cow-calf producers in no hurry to wean and sell calves; very different from the drought year of 2018.

On this report, Year to Date Auction receipts are 8.6 percent behind a year ago and 6.1 percent behind the previous three-year average. These numbers follow what today’s Cattle on Feed Report stated. The On Feed number quoted at 99 percent; Placements at 91 percent and Marketings at 98 percent.

Marketings were affected by the Tyson Foods fire on Aug. 9, however, the industry has certainly done their part in moving through the available supplies the last month and a half.

Steer carcass weights for week ending Sept. 7 jumped 9 lbs this week to 893 lbs; only 3 lbs below a year ago. That is also only 11 lbs below last fall’s high and 51 lbs larger than this spring’s low.

The fed cattle weights are expected to climb as the available supply will increase through the fall.

Silage choppers are in full swing across the Northern Plains now and some feedlots are getting ready to start piling high moisture corn in Nebraska.

The maturity of the corn crop in the Dakotas is a major concern as more warm and dry days are needed but the forecast puts the region in a cooler, wet pattern for the near future. Auction volume this week included 51 percent weighing over 600 lbs and 42 percent heifers.

Unless otherwise stated prices are FOB weighting points with 2-3 percent shrink or equivalent and a 5-10 cent slide on calves and a 4-12 cent slide on yearlings from base weights. Current sales are up to 14 days delivery.