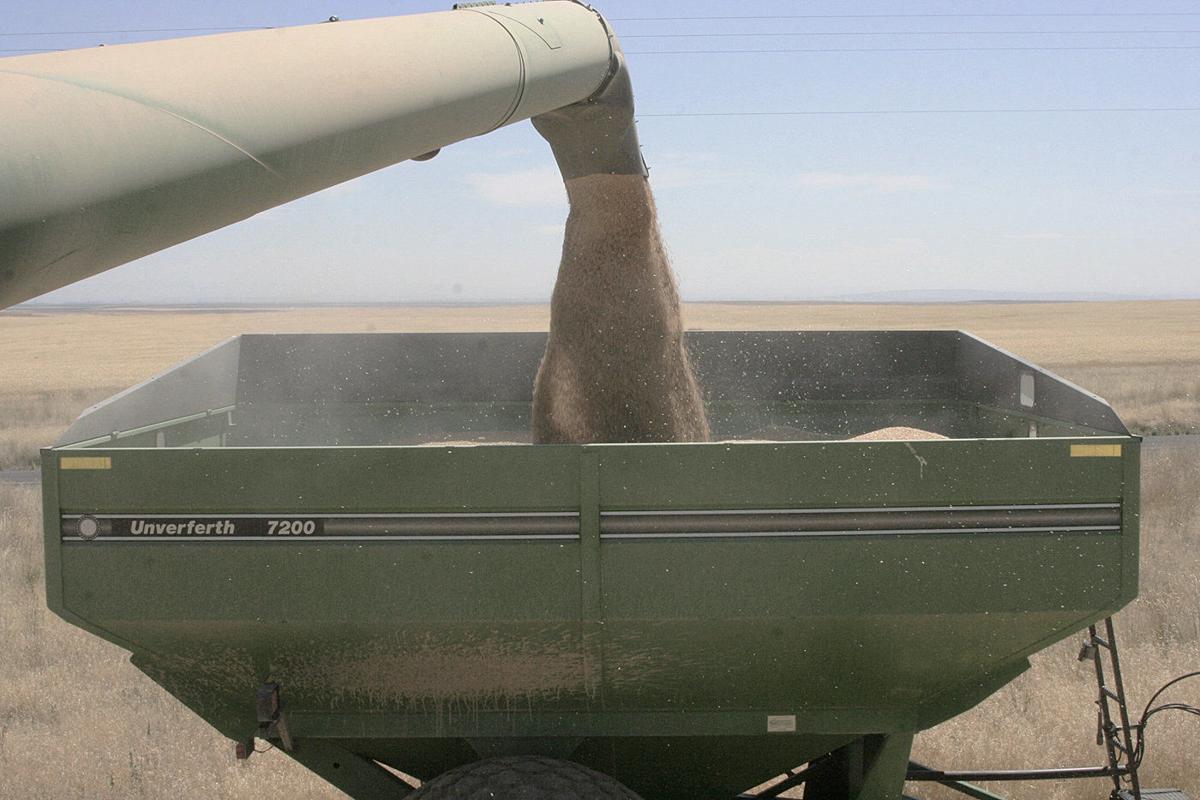 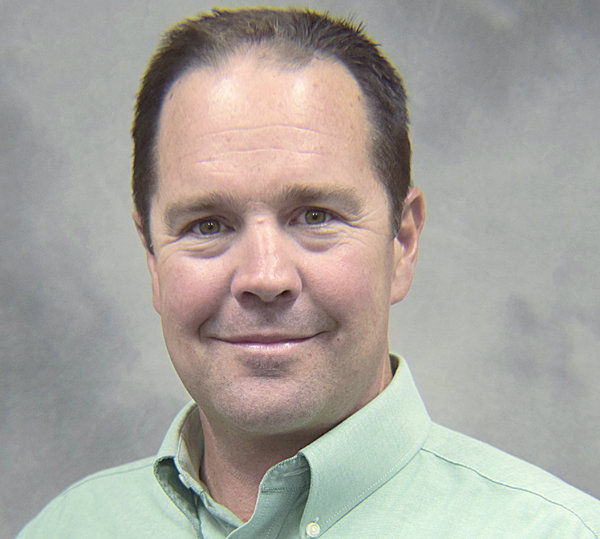 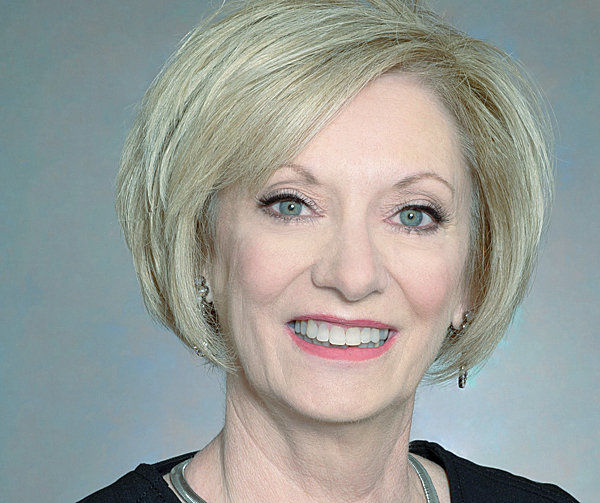 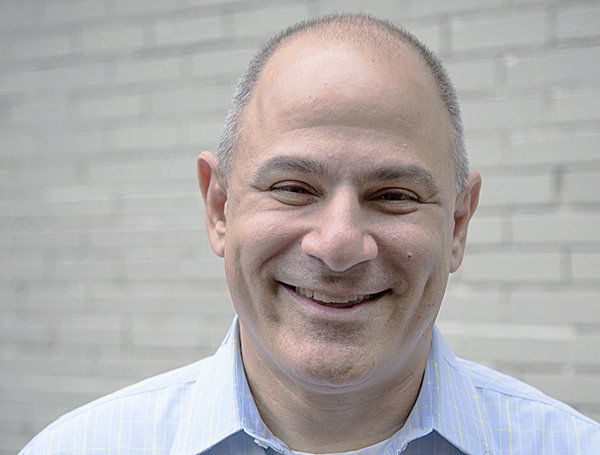 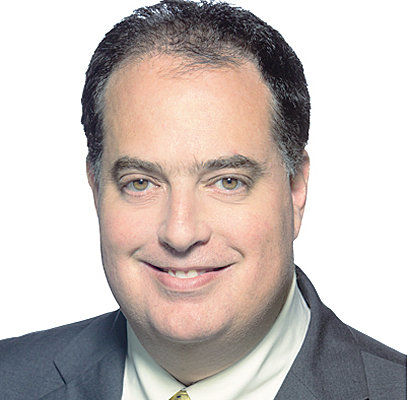 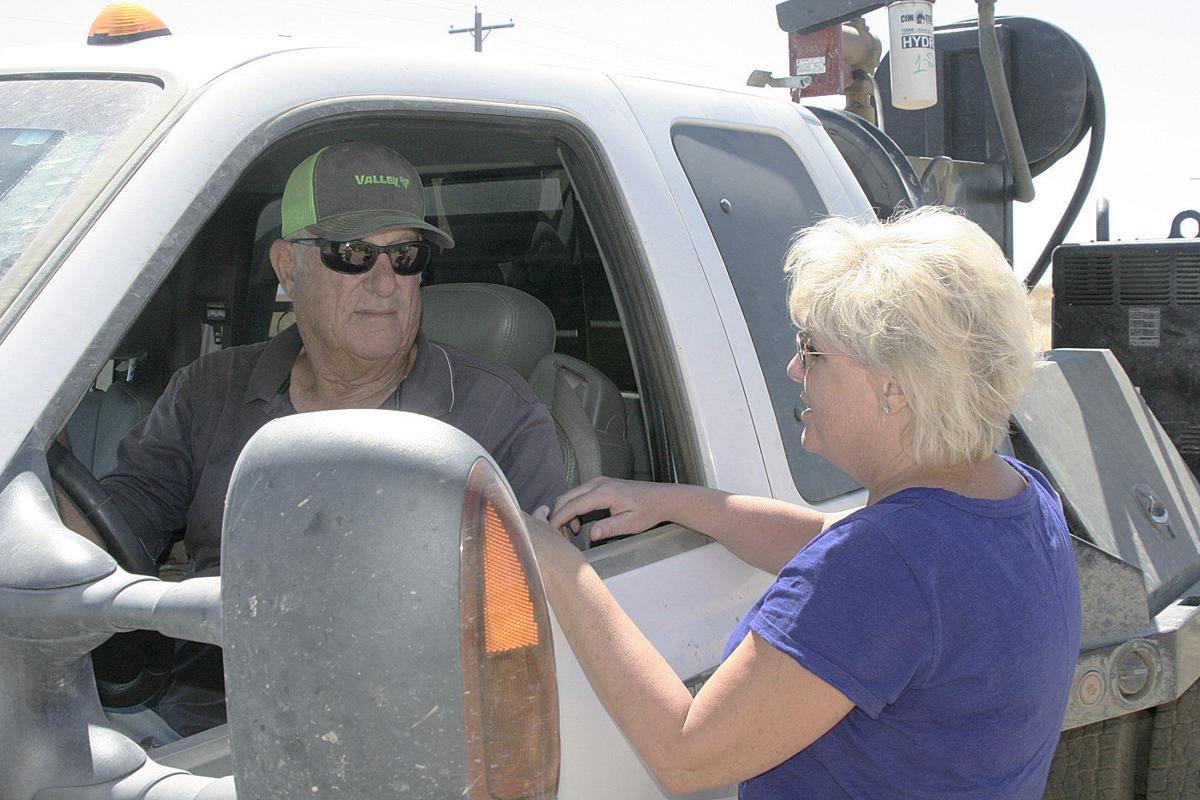 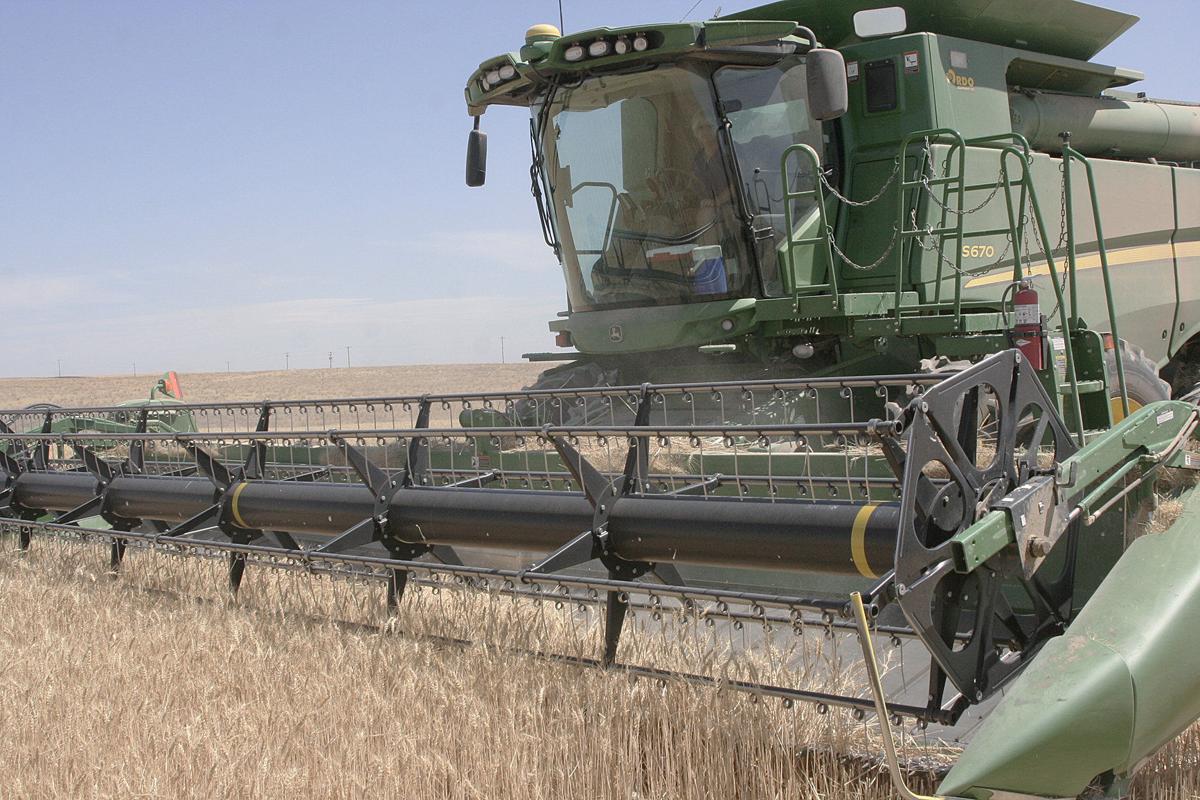 Paterson, Wash., wheat farmer Nicole Berg, secretary of the National Association of Wheat Growers, harvests a field July 24. Several years ago, drought meant it would have cost Berg and her family more to run the combine over the field than it would have to harvest wheat with a yield of 3 bushels per acre. Crop insurance keeps family wheat farms in business, Berg says. 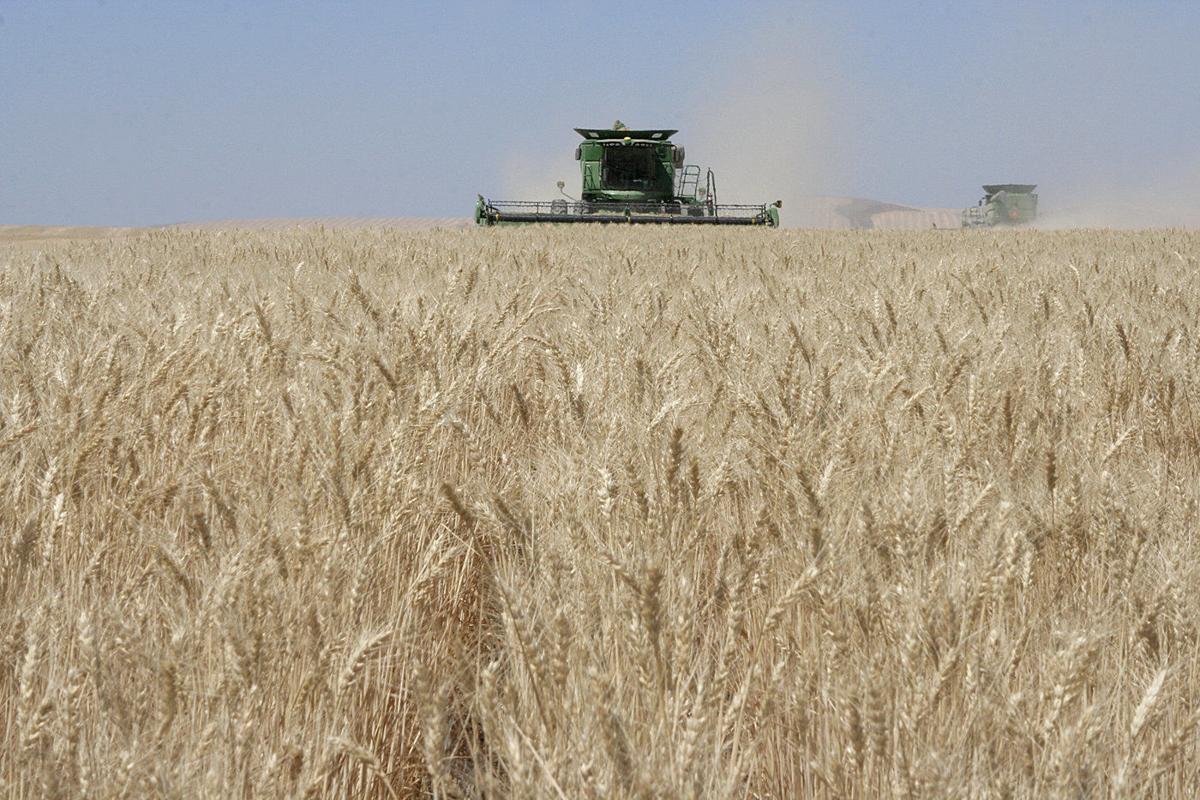 {span}Brazil has agreed to drop a tariff on U.S. wheat.{/span} 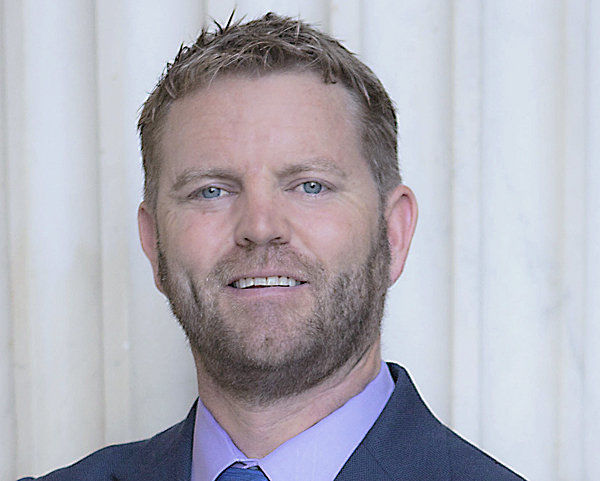 Paterson, Wash., wheat farmer Nicole Berg, secretary of the National Association of Wheat Growers, harvests a field July 24. Several years ago, drought meant it would have cost Berg and her family more to run the combine over the field than it would have to harvest wheat with a yield of 3 bushels per acre. Crop insurance keeps family wheat farms in business, Berg says.

{span}Brazil has agreed to drop a tariff on U.S. wheat.{/span}

Critics say crop insurance subsidizes farmers, but it is the only guarantee of help when disaster strikes

To break even, her family needed a yield of at least 7 bushels per acre, but a crop insurance assessor estimated Berg’s wheat would yield just 3 bushels per acre. That would bring in less money than it would cost to harvest the crop.

Berg, who is now secretary of the National Association of Wheat Growers, and her family instead received a payment from the crop insurance they bought that year for about 70 percent of their farm’s average production, about 25 bushels per acre, minus the wheat remaining in the field that they decided not to harvest.

The scenario is not unusual. In many areas across the West, Midwest and South, farmers can experience multi-year droughts, Berg said.

Even with crop insurance, “when you get back-to-back-to-back drought, you’re just basically paying your bills and that’s about it,” Berg said. “You can’t buy new machinery, you can’t turn the corner to help keep up with maintenance. There’s just not enough money.”

Wheat farmers can’t remain viable without crop insurance, Berg said. “Over time, over the long-term, they would go out of business.”

Yet crop insurance, a key part of the federal farm bill, continues to draw criticism from both conservative think tanks and liberal environmentalists inside Washington, D.C.’s Beltway.

In an April report, Daren Bakst, senior research fellow in agricultural policy for the Heritage Foundation think tank, said, “It is ... very difficult to justify providing multiple subsidies to cover the same losses, to cover shallow (minor) losses or to insulate farmers from competing in the market like other businesses.”

Bakst told the Capital Press his organization recommends moving away from subsidies to a “more properly” focused safety net, emphasizing policies insuring yields instead of those insuring revenues.

“It’s about making changes that make sense for everyone — farmers, taxpayers, consumers and everyone across the board,” Bakst said.

The Environmental Working Group, an environmental group, claims farmers who are “millionaires and billionaires” should shoulder more of the cost of insurance, and recommends setting limits on federally supported insurance.

“After all, the American people are footing the bill,” he said. “It seems like a reasonable proposition that a farmer or farm owner who’s made millions in the marketplace should have to pay a little bit more for their crop insurance than a farmer who’s just struggling to stay on the farm.”

Crop insurance isn’t like homeowner’s insurance. A homeowner might pay for insurance but never have a fire or other catastrophic loss to a house.

For farmers, though, it’s not a matter of if disaster strikes, but when. Prolonged drought can bring even the most successful farmer to his, or her, knees financially.

The idea behind the public-private partnership included in the Farm Bill was to avoid crop disasters like those that occurred from 1989 through 2012 that forced Congress to pass 42 emergency bills costing $70 billion to rescue farmers.

Depending on the policy, farmers can cover as much as 75 to 85 percent of a crop for naturally occurring damage and price loss.

According to the USDA Risk Management Agency, 86 percent of total U.S. acres were covered by federal crop insurance in 2015, not including hay, livestock, nursery, pasture, range and forage.

The agency offers a variety of policies that cover crop yields, revenues, livestock and whole-farm revenue protection. The most common policy by far covers individual farm revenue. It represents more than 80 percent of the entire crop insurance portfolio.

The cost of purchasing crop insurance consists of an administrative fee and the insurance premium. The total premium amount paid by the producer can be adjusted by a premium subsidy paid by the Federal Crop Insurance Corp. The amount of premium subsidy depends on several factors, including the coverage level selected by a producer.

Last year, the agency paid out $5.22 billion in crop insurance indemnities to farmers across the nation, including nearly $163 million to farmers in the Pacific Northwest.

Crop insurance is far more likely to cover a crop loss than homeowner’s insurance will cover a loss such as fire, said Ben Thiel, director of RMA’s regional office in Spokane.

He occasionally hears from people who don’t think they need crop insurance, but always have homeowner’s insurance.

“Crops are a living organism exposed to all these weather events that potentially can occur, where a house is a hard, rigid structure — weather events occur to it all the time, and you don’t sustain any damage because it’s minimal,” he said. “A house has the ability to withstand certain things where a crop is more fragile and doesn’t have that ability. There is greater risk.”

That’s one reason crop insurance is provided with the help of the federal government, as opposed to only the private sector, Thiel said.

“The risk is so great that the private sector can’t offer multi-peril crop insurance without the assistance of the federal government being involved in a public-private partnership,” he said.

Some farmers are required by their banker to buy crop insurance.

“Farmers don’t want a payout from the crop insurance,” said Bryan Bock, senior vice president of lending for northeastern Washington for Northwest Farm Credit Services in Spokane. “They want to produce an amazing crop and get paid for it. That would be their goal.”

Crop insurance is the only “sure bet” for farmers, agreed Marva Ulleland, vice president of operations for insurance services for Northwest Farm Credit Services in Spokane.

“If you plant the seed, you can’t be assured that it is going to rain — you don’t know if you’re going to have moisture, drought or a fire,” she said. “Crop insurance is the one thing that they can count on when they put that seed in the ground. It’s something they can take to the bank and demonstrate that this is the worst-case scenario: ‘Should we have a shortfall in our crop, this is the guarantee that we would receive.’”

Improvements to crop insurance can be made, said Chandler Goule, CEO of the National Association of Wheat Growers.

Groups such as the Heritage Foundation and the EWG want to get rid of crop insurance, Goule says. Their messages are well-crafted for a Washington, D.C., crowd, and for members of Congress from urban areas, designed to raise money and are usually misleading and false, he said.

Very few farmers could be viable without crop insurance, Goule said: those who have been farming a long time, and are at the point where they can weather two or three years of drought.

But that’s a small, single-digit percentage of growers, he said.

“It’s getting harder and harder every year,” he said. “We should never let up on our continuous support for crop insurance.”

Advocates and critics alike say the House and Senate versions of the Farm Bill did little to affect crop insurance this go-round.

Members of Congress worked to “do no harm,” said Texas Rep. Michael Conaway, chairman of the House Ag Committee, during a recent visit to Spokane. He hopes to pass the new Farm Bill by the end of September, when the current bill expires, he said.

“Whether you’re farming a thousand acres or 100 acres, risks are risks,” Conaway said. “If you want safe, affordable food and you want it produced in America, we need that safety net, and crop insurance has proved itself to work year in and year out.”

Berg, the Paterson farmer, said growers need to share the value of crop insurance with urban audiences. She compares it to car insurance, when a vehicle is totaled.

“(If we) have a total wreck in our field, we can’t pass on our costs because we’re price-takers,” she said. “If the United States wants to continue to have a cheap food policy, crop insurance is going to have to be part of that safety net to keep us family farms in business.”