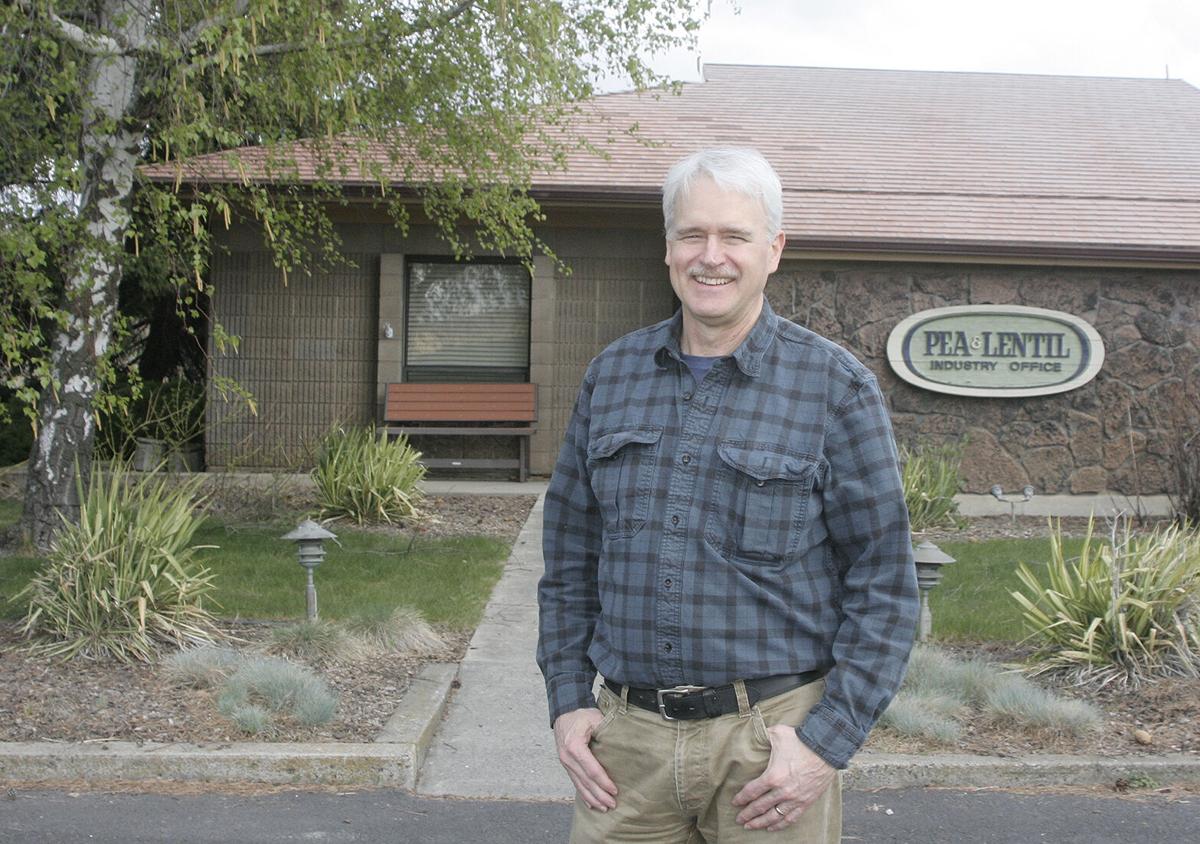 Tim McGreevy, CEO of the USA Dry Pea and Lentil Council, at the council office. The office straddles the Idaho-Washington state line. 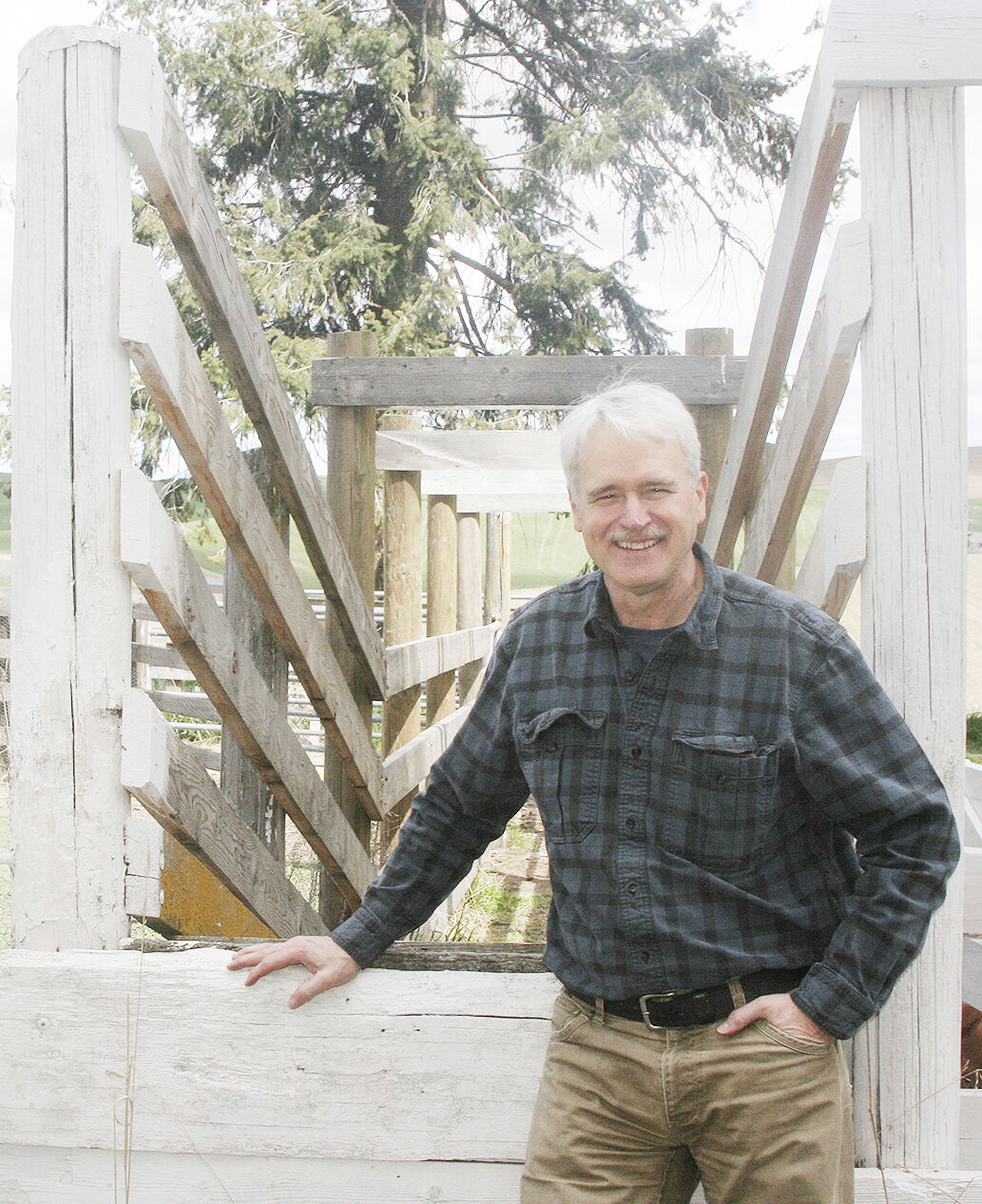 Tim McGreevy with a remodeled cattle chute on the Moscow, Idaho, farm where he used to work. McGreevy helped the farmer build the original chute, which has since been remodeled. 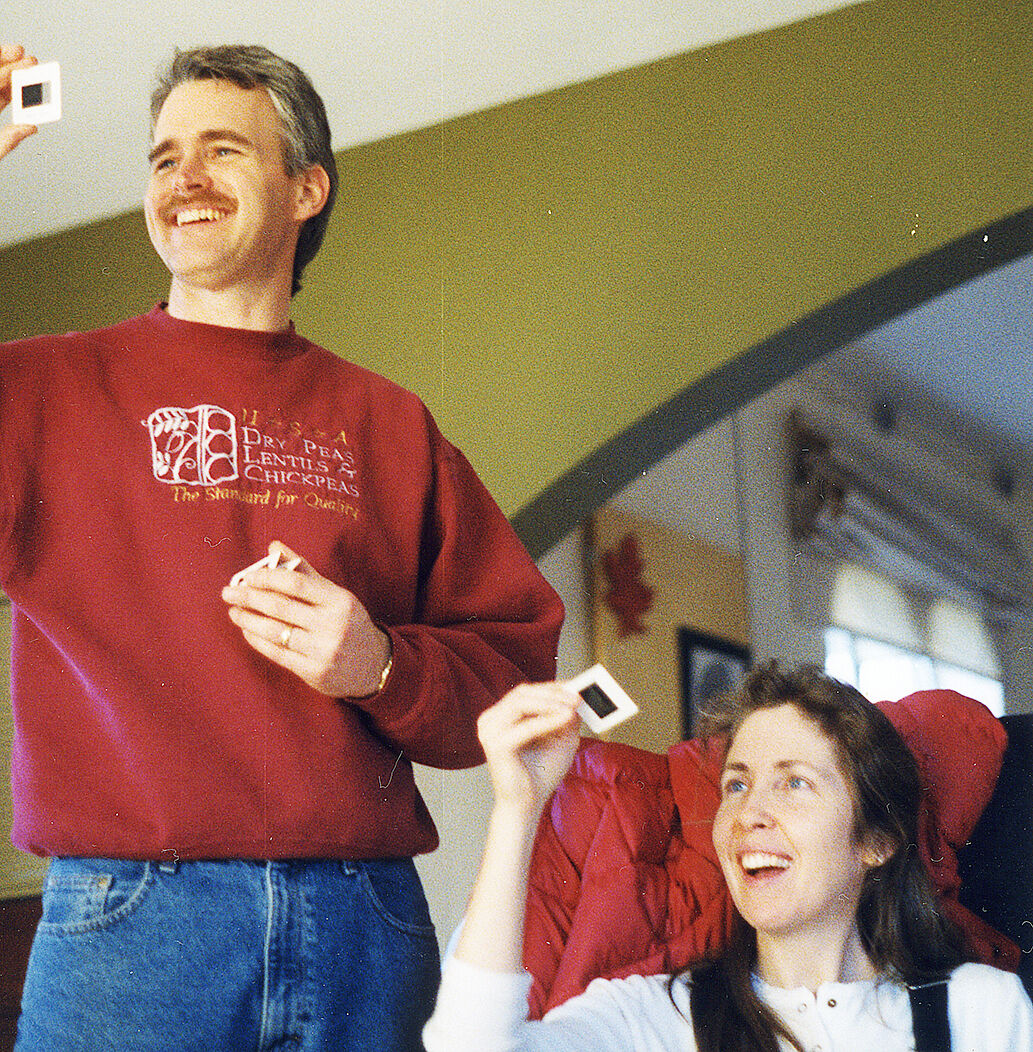 Tim McGreevy with his wife, Christine. 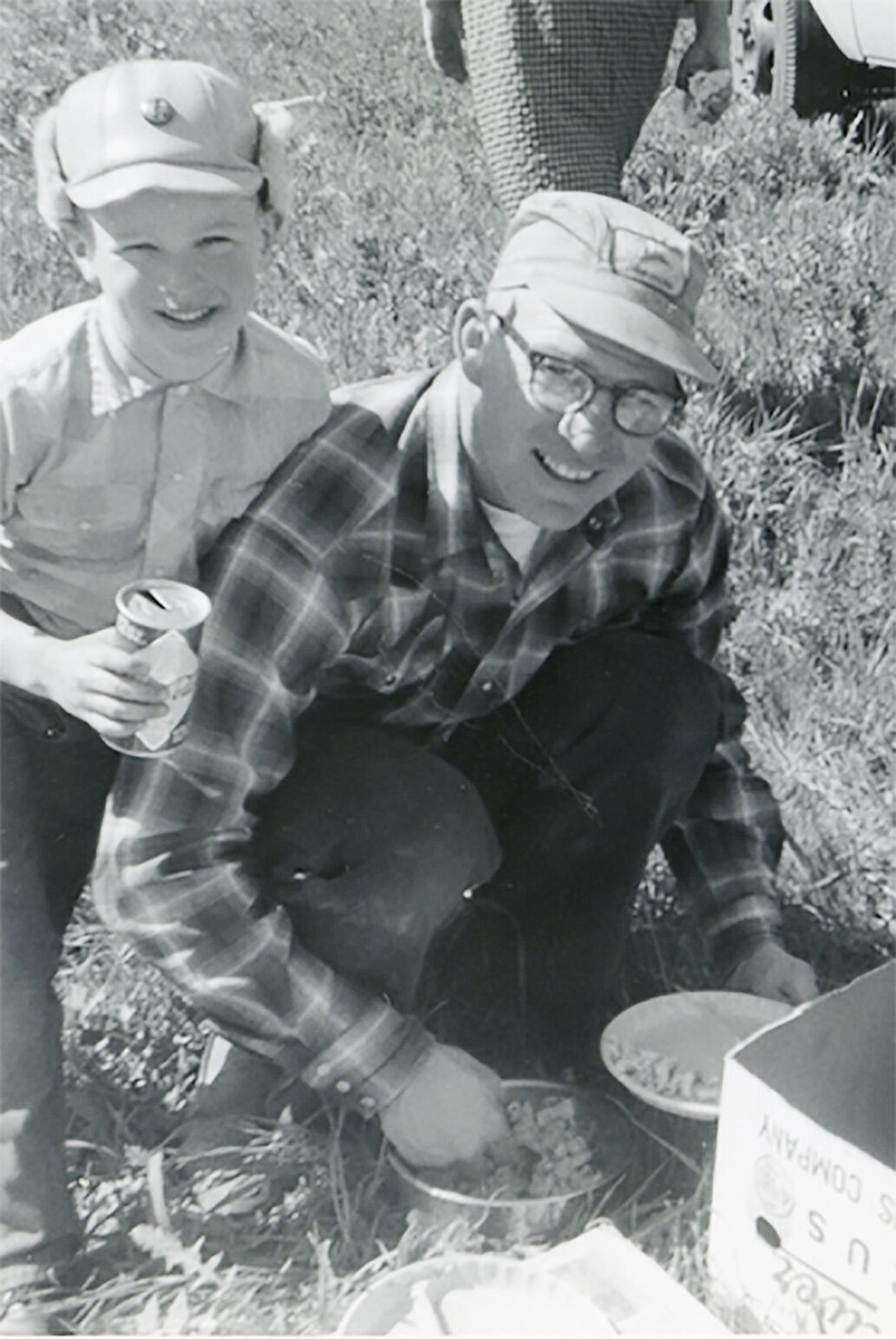 Tim McGreevy, about 6 years old, with his father Dan McGreevy, a crop adviser and plant manager for the McGregor Co. for 33 years. Dan passed away in 2010. 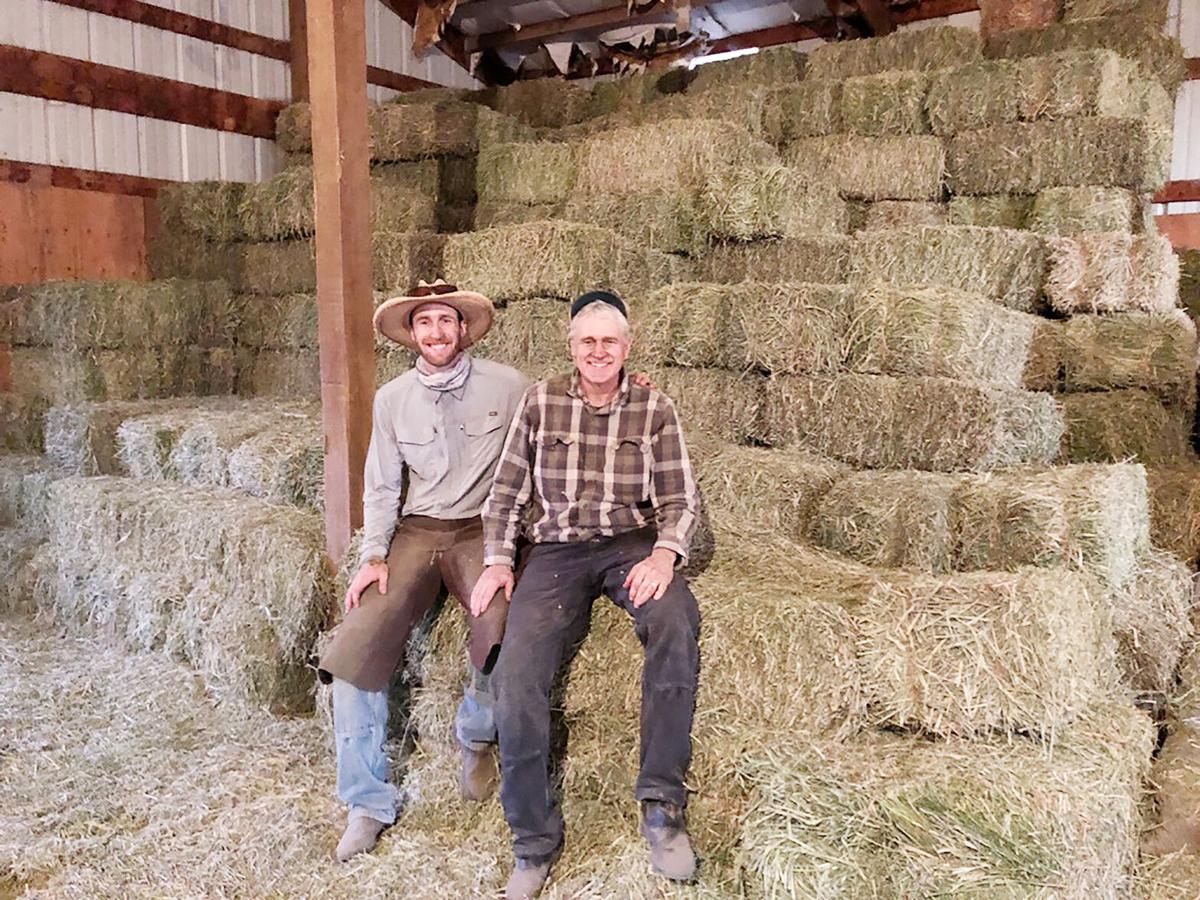 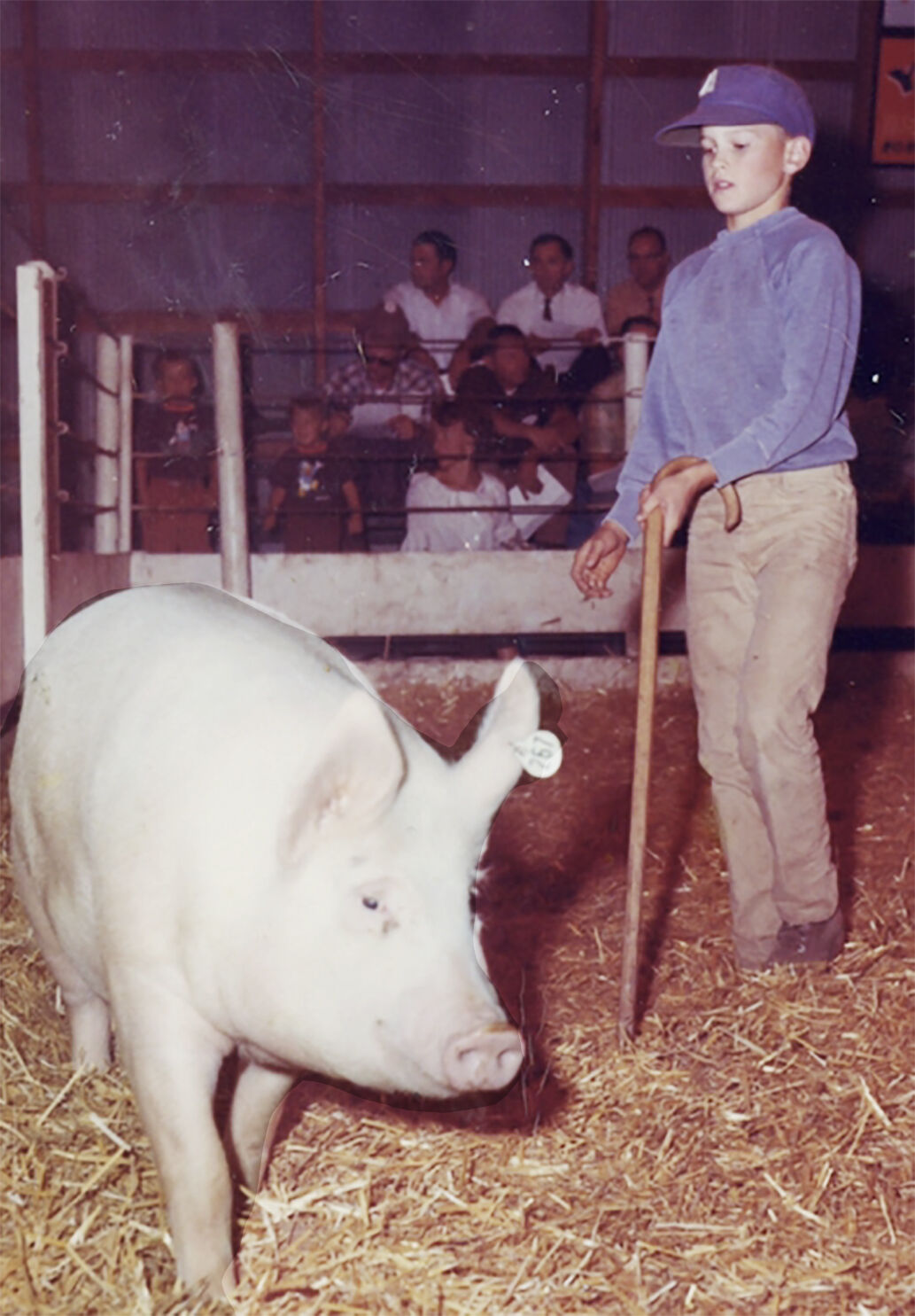 Young Tim McGreevy shows a pig at the fair. 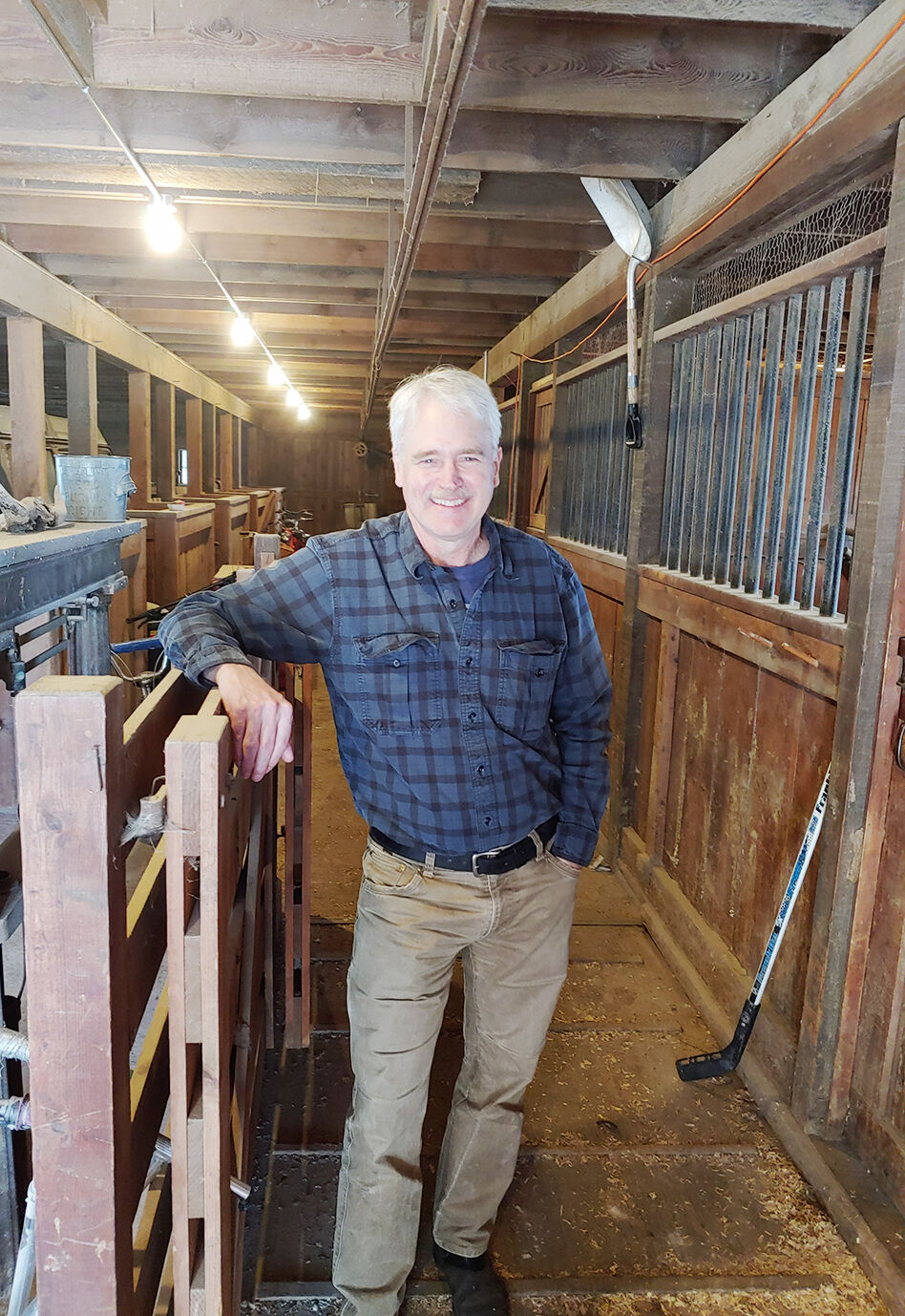 Tim McGreevy worked on a small Moscow, Idaho, farm near the USA Dry Pea and Lentil Council office as a college student and after he graduated. He hoped to become a farmer himself. 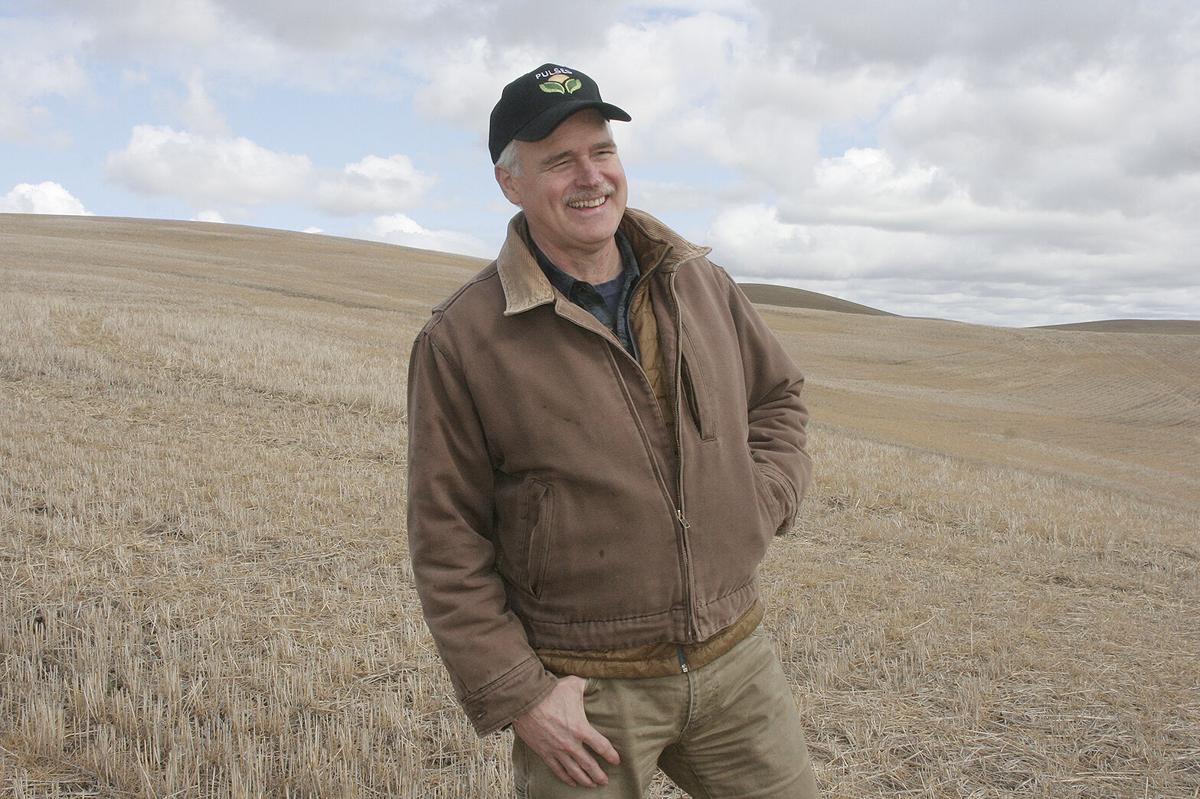 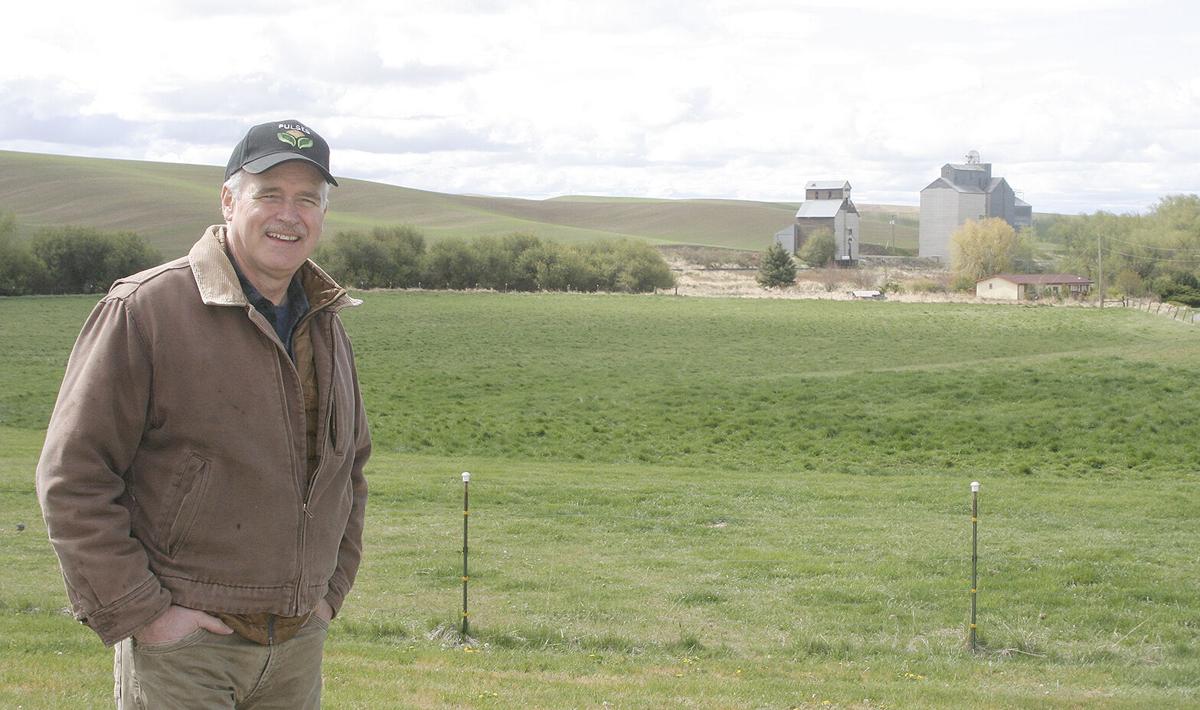 Tim McGreevy, CEO of the USA Dry Pea and Lentil Council, at the council office. The office straddles the Idaho-Washington state line.

Tim McGreevy with a remodeled cattle chute on the Moscow, Idaho, farm where he used to work. McGreevy helped the farmer build the original chute, which has since been remodeled.

Tim McGreevy with his wife, Christine.

Tim McGreevy, about 6 years old, with his father Dan McGreevy, a crop adviser and plant manager for the McGregor Co. for 33 years. Dan passed away in 2010.

Young Tim McGreevy shows a pig at the fair.

Tim McGreevy worked on a small Moscow, Idaho, farm near the USA Dry Pea and Lentil Council office as a college student and after he graduated. He hoped to become a farmer himself.

Tim McGreevy practices what he preaches.

A few years ago, the USA Dry Pea and Lentil Council, where McGreevy is chief executive officer, promoted the “half-cup habit,” challenging consumers to eat half a cup of pulses three times a week.

So, for breakfast every morning, McGreevy and his wife, Christine, started eating eggs and lentils — or chickpeas or beans.

Now, he says, he’s even more of a true believer in pulses.

“I’ve taken that campaign and brought it into my own life,” he said. “I just feel better. These crops, they are so good for your health, but they also just taste great. I’m the better for it.”

McGreevy, 62, has a wide, gentle grin. He is thoughtful and at every moment seems overfilled with gratitude for his family and career.

“I’ve been blessed my whole life,” he said at the council’s office, which straddles the Idaho-Washington state line near Moscow, Idaho.

When McGreevy first took the job nearly 30 years ago, pulses — peas, lentils and chickpeas, also known as garbanzo beans — were grown on about 400,000 acres in those two states.

Pulses will continue to generate that same level of growth in the next 10 years, McGreevy predicts.

“We could be at 10 million acres in the United States, and in so many different parts of the country, just because of the aggregates that they bring,” he said, referring to the health and soil benefits that pulses provide.

‘Never even wore a tie’

McGreevy comes from an agriculture-related family. His father, Dan, started a fertilizer and chemical business, which was purchased by the McGregor Co. Dan worked for the McGregor Co. for 33 years as a plant manager in Pullman, Wash.

His mother, Margaret, studied animal science and went on to become a Whitman County, Wash., commissioner.

Tim is the second of nine children. “There’s a bunch,” he said. Two siblings are also involved in agriculture.

McGreevy graduated from WSU in 1983 with a bachelor’s degree in general agriculture and communications and a master’s degree in agricultural economics.

He wanted to be a farmer.

“There was just a deep longing, a deep connection to the ground,” he said. “I just loved the work, planting things and watching things grow.”

During college and after graduation, McGreevy worked for a farmer and rancher who owned a 600-acre operation not far from the council office where he works today.

“That was just a little bit of serendipity,” McGreevy said.

But the Russian grain embargo of 1980 meant commodity prices were “super low” and interest rates were “super high,” meaning McGreevy didn’t have the capital to buy the farm when the farmer wanted to sell.

“I was devastated, of course, at the time,” he said. “My dream of being a commercial farmer on the Palouse was dashed. But we’re all on a journey. Instead, my path was to work with farmers.”

“I came right off the combine, got on (my) first airplane ride, ever, never even wore a tie in my life ... and went to Boise, interviewed and they offered me the position,” McGreevy said.

Then he was recruited to apply for the top job at the pulse council.

Dick Wittman, a retired farmer in Culdesac, Idaho, was chairman of the council’s grower board at the time.

The council was reorganizing to incorporate six organizations, representing growers, processors and exporters on the county, state and national levels. They needed someone who could focus on many fronts and coordinate the interests of all the groups.

McGreevy was “by far” the top choice, Wittman recalled. But he initially turned down the job.

McGreevy has “more than” lived up to Wittman’s expectations since coming on board in 1994, Wittman said.

“He has never lost his energy,” Wittman said. “He has reinvigorated, re-energized and continues to be on the front line of (pulse) issues after almost 30 years in that position.”

Wittman credits McGreevy with advancing the industry beyond the Pacific Northwest and forging a united front when speaking to federal lawmakers about policy.

“I can’t tell you how many times a congressman has said, ‘Why don’t the other commodity groups do what you’re doing?’” Wittman said.

Andrew Fontaine, chairman of the council’s executive board and president of Spokane Seed Co., has observed McGreevy in action for many years.

He recalled McGreevy’s efforts in the early 2000s to get peas and lentils included in the Farm Bill. A USDA spokesman told the industry during its annual convention that the crops would never be included because they were just a “small commodity.”

“After the speaker left the stage, Tim went up there and said, ‘Mark my words, we will be on that bill,’ and sure enough, a year and a half later, we were on that bill as a program crop,” Fontaine said. “That’s really what catapulted us off into these other regions.”

It has six international offices, based in the Indo-Pacific region, Latin America, North Asia, South Asia and the Middle East; the Mediterranean and North Africa; and Europe.

Each state organization assesses growers 1% of the net sale value at the first point of sale, and the grower organizations also contribute to the council’s budget.

The Nebraska Pulse Crops Commission was just created by the Nebraska legislature this year, and is in the process of joining the national coalition.

The American Pulse Association brings the USA Dry Pea and Lentil Council together with the dry bean industry to work on domestic promotion and research on pulses.

Dry bean acreage is similar to peas, lentils and chickpeas, and total crop sales were nearly $700 million in 2019.

“We’re really on the rise,” McGreevy said. “Plant-based foods are really gaining in popularity here in the United States and around the world. We’re on the cutting edge of that.”

Beyond Meat, the plant-based meat substitute, is more than 50% pulses, he said. Some alternative pastas are 100% pulses.

Peas also play a big role in the plant-based milk category, which had 20% growth last year with $2.5 billion in sales.

Under the Farm Bill, the industry received $5 million in dedicated funding for the pulse crop health initiative, focusing on nutrition, functionality and sustainability.

USDA Agricultural Research Service researchers are part of the new pulse crop quality network in three labs across the U.S, including the Western Wheat Quality Lab on the WSU campus. They’re studying which pulses work best as ingredients in certain food uses and assisting breeding efforts.

It’s something McGreevy’s been working on for more than 20 years.

Variety breeding priorities used to be focused on yield, size and color, he said.

“Now we’re breeding for protein, starch and fiber content,” he said. “Our whole breeding program has shifted because there’s such a significant opportunity to use these crops.”

Pulses are also one of only a few plants that produce their own nitrogen, he said. Because of that, they play a significant role in long-term agricultural sustainability.

“How many plants bring their lunch box to work?” he said. “They feed themselves, and then they leave an extra half-sandwich for the next crop. There’s not many crops that can do that.”

The council also led the charge with counterparts worldwide to have the United Nations declare 2016 an International Year of Pulses. McGreevy called it a “paradigm shift” for the global pulse industry, increasing the use and awareness of pulses.

In the next decade, he wants policy makers and consumers to recognize the importance of pulses.

“I think these crops have been just horribly under-researched for the health and nutrition and sustainability they bring to the table,” he said. “Also, they have been under-promoted. ... We need to have a lot more investment in every aspect of these crops.”

Small farmer at heartMcGreevy says he’s equally passionate about his job, his farm and his family.

He and Christine have four grown children — Maura, Martin, Mitchell and Kadin — and two granddaughters, Finnley and Larkin.

They have been married for 38 years.

The McGreevys live in Moscow. He also owns the farm he grew up on north of Pullman. He raises wheat, pulses, canola and grass-fed beef on about 100 acres. He pays a neighboring farmer to seed and harvest the crops.

“So I’m still a farmer, a small one,” he said. “It’s just so fun, because I represent farmers.”

The futureMcGreevy doesn’t plan to retire any time soon.

The council and American Pulse Association recently held a virtual media event with top social media influencers. A chef from the Culinary Institute of America showcased the nutrition and environmental sustainability of pulse crops.

Consumers in the Millennial generation and Generation Z — those born between 1980 and 2005 — are more environmentally conscious, McGreevy said, adding that pulses have something to offer them and the entire food system.

McGreevy predicts higher demand as ranchers use more pulses in their feed rations, and the industry works to reduce its carbon footprint to net-zero carbon emissions by 2050.

McGreevy pointed to the industry leaders on the boards he oversees. They’re all working to position pulses as a solution to some of the biggest problems that the agricultural world faces, he said.

“It’s really exciting,” he said. “We are at the very beginning.”