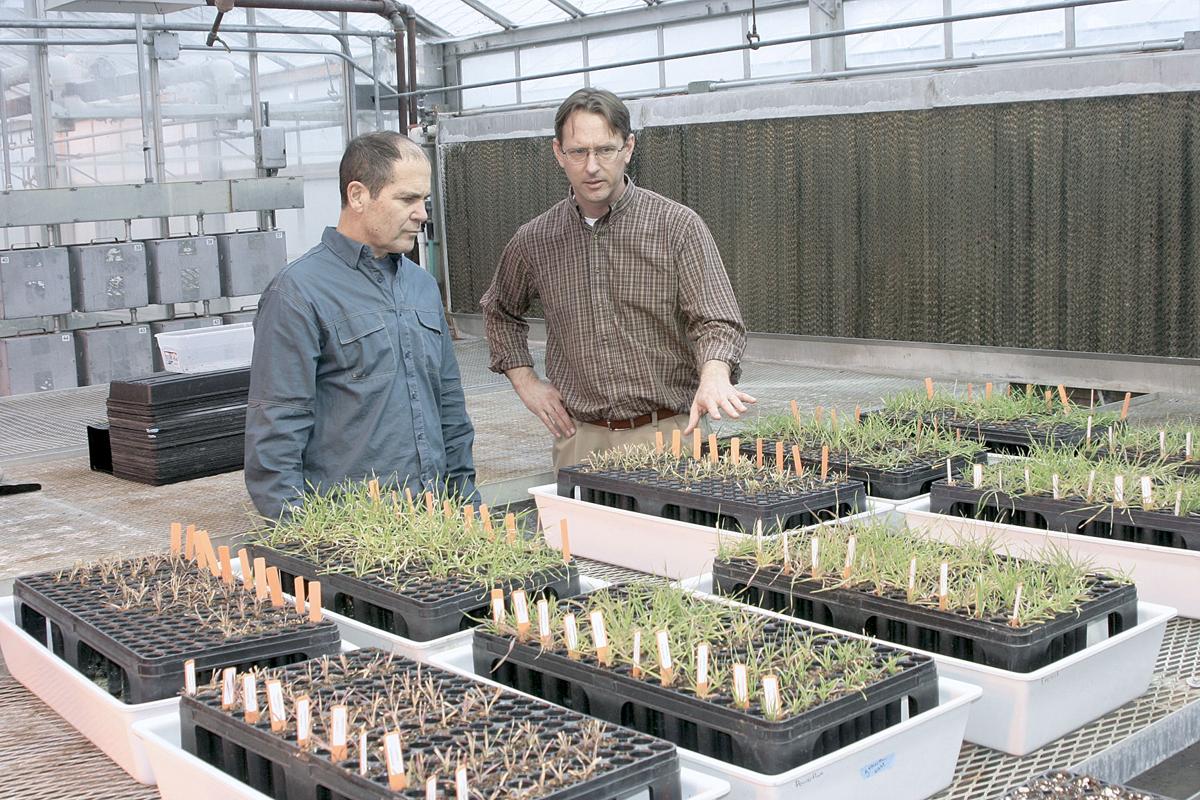 Washington State University weed scientists Drew Lyon and Ian Burke look over a herbicide resistance test for the weed downy brome March 27 in a greenhouse on the WSU campus in Pullman. 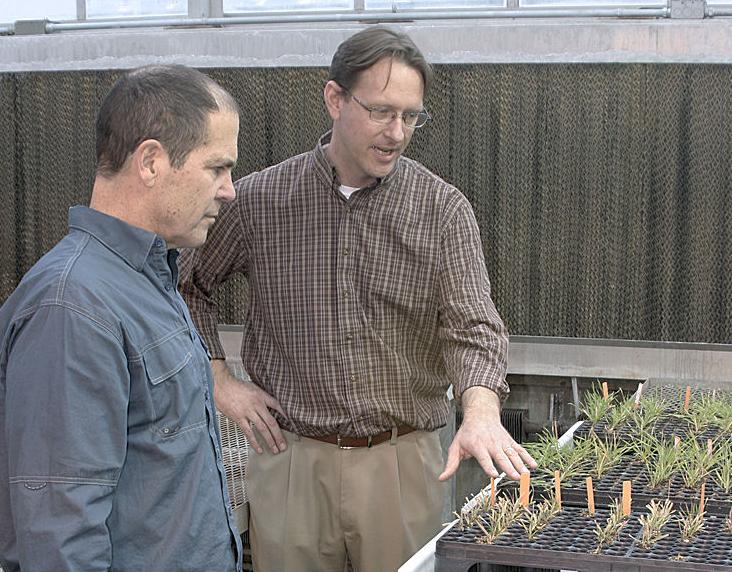 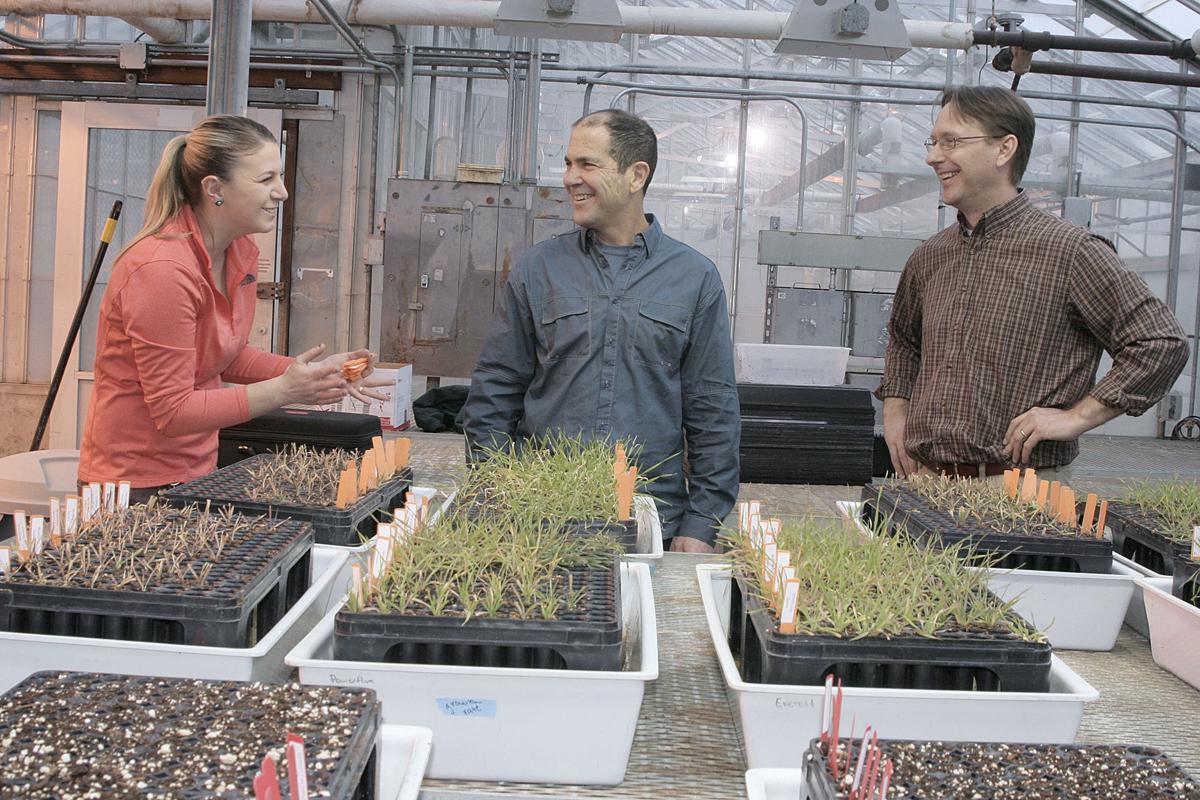 Research associate Rachel Zuger and weed scientists Drew Lyon and Ian Burke in the herbicide resistance testing laboratory on the Washington State University campus in Pullman. They have developed a map showing which weeds are resistant to herbicides, and where. 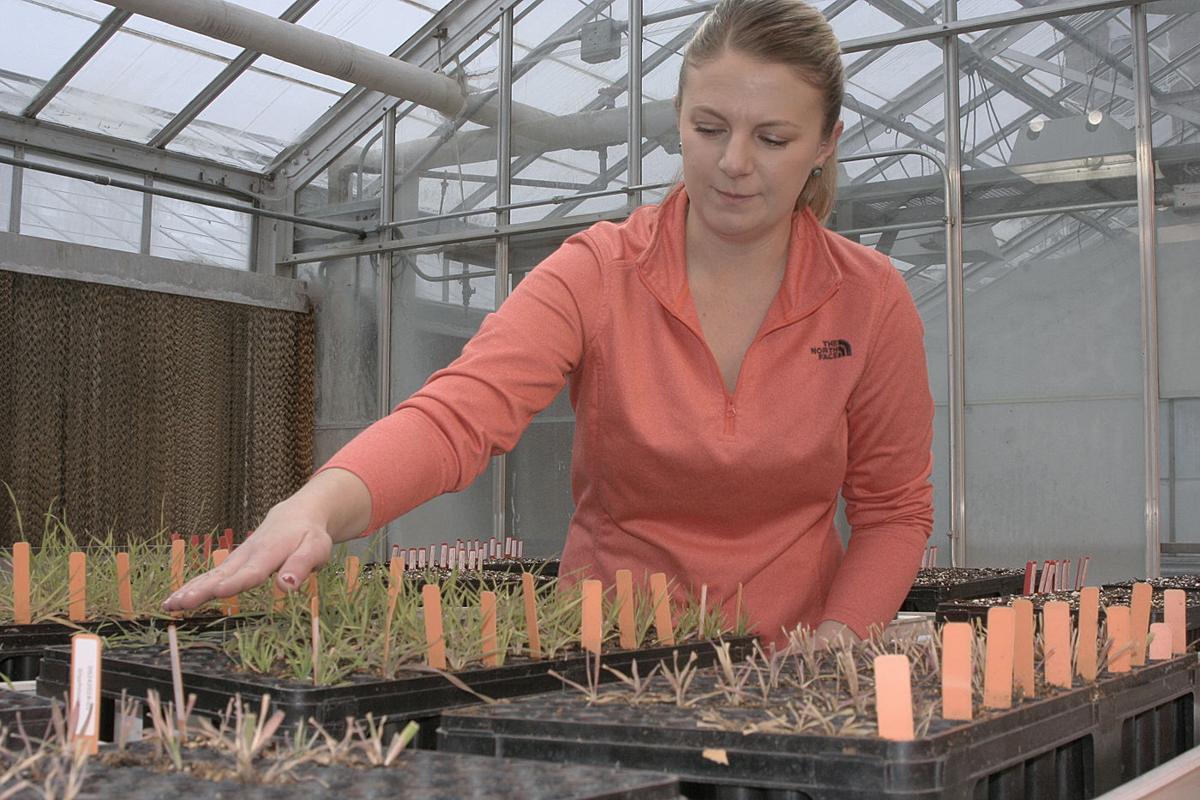 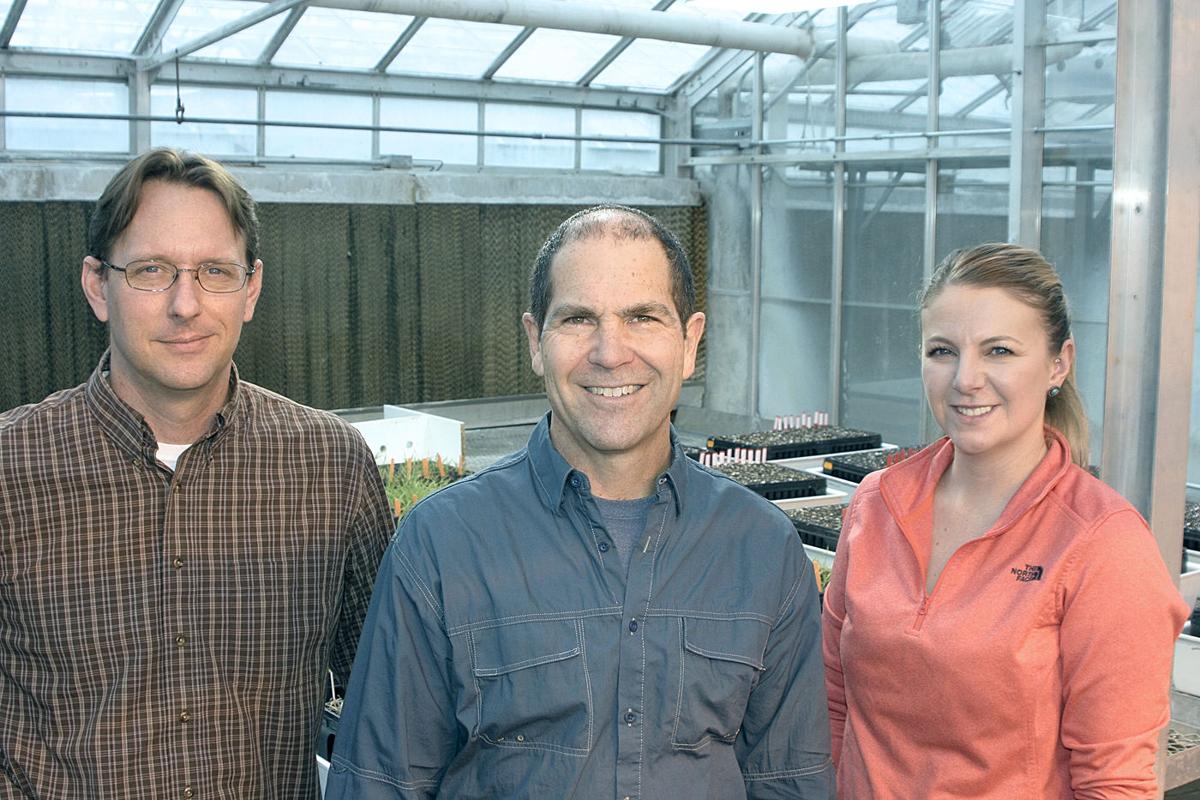 Weed scientists Ian Burke and Drew Lyon and research associate Rachel Zuger in the greenhouse where they test for herbicide resistance on the Washington State University campus in Pullman. They have developed a map showing which weeds are resistant to herbicides, and where. 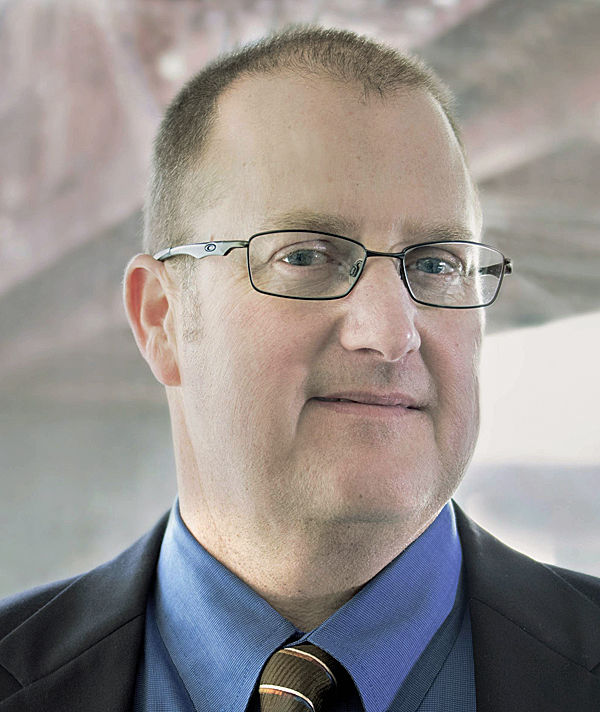 Brit Ausman is a Asotin, Wash., area wheat farmer, and a board member on the Washington Grain Commission.

Washington State University weed scientists Drew Lyon and Ian Burke look over a herbicide resistance test for the weed downy brome March 27 in a greenhouse on the WSU campus in Pullman.

Research associate Rachel Zuger and weed scientists Drew Lyon and Ian Burke in the herbicide resistance testing laboratory on the Washington State University campus in Pullman. They have developed a map showing which weeds are resistant to herbicides, and where.

Weed scientists Ian Burke and Drew Lyon and research associate Rachel Zuger in the greenhouse where they test for herbicide resistance on the Washington State University campus in Pullman. They have developed a map showing which weeds are resistant to herbicides, and where.

PULLMAN, Wash. — It takes a few ounces per acre of a herbicide containing glyphosate to kill the weed downy brome.

At least, it’s supposed to.

But when a farmer sent a sample of the weed to Washington State University professor Ian Burke’s lab, researchers determined it would take seven times the maximum label rate of the herbicide to kill it.

That’s an extreme example of a problem that’s become more serious in recent years: herbicide resistance in weeds. For decades, farmers have relied on an array of herbicides to get rid of weeds that compete with their crops and drastically reduce yields. Now, through repeated use of those chemicals, the weeds are developing resistance to them.

According to the Weed Science Society of America, once a weed population is exposed to a herbicide to which one or more plants are naturally resistant, the herbicide kills susceptible individuals, but the resistant ones survive and reproduce.

With repeated herbicide use, resistant weeds that initially appeared as isolated plants can spread to dominate the field.

Weeds are the most destructive factor farmers face, Burke said.

“Every year, a weed problem can take all of your wheat if you don’t do anything about it,” he said.

Farmers might think, “If it’s working, stick with it until it doesn’t work,” said Drew Lyon, another WSU weed science professor.

“That’s one of the reasons we’re in this mess we’re in,” he said. “We found a herbicide that worked, and we stuck with it until it didn’t work any more.”

“This is a growing issue that is going to become economically crippling, and we’ve got to figure out some answers,” Ausman said. “It’s a different weed in almost each geographic location that is showing signs of herbicide resistance.”

If a farmer has one or more of those weeds, they’re likely resistant to something, Burke said. In a few pockets, the weeds are resistant to most registered herbicides, he said.

When a farmer suspects or confirms resistance to one herbicide, the first thing he does is rotate to another with a different mode of action — the biochemical process that kills the weed, said Steve Riggers, a farmer in the Nezperce and Craigmont, Idaho, area.

“If you lose one mode of action, you may be very limited as to what you can grow and what other options you have,” Riggers said. “If you have a weed that’s resistant to multiple modes of action ... then you’ve really backed yourself into a corner.”

Weeds resistant to more than one mode of action are becoming more common, Burke, the WSU weed scientist, said.

The problem is not confined to any one region. It is even greater in the Midwest and exists as far away as Australia, Lyon and Riggers said.

Using two modes of action on the same weed works in theory, Burke said, as it’s difficult for a weed to develop resistance to both at the same time.

But not every herbicide lasts the same amount of time, and mixtures aren’t always compatible.

“One of the problems is, we came to that too late,” Lyon said. “Coming in with two modes of action that are still effective would have been a great idea before we developed the problem.”

In wheat, farmers should manage weeds with products that currently work, such as BASF’s Clearfield technology and Zidua, FMC’s Anthem Flex, Albaugh’s CoAXium wheat system and Syngenta’s Talinor, and make sure they remain effective for as long as possible, Lyon said.

Part of the problem is when herbicide companies develop new products, wheat isn’t a high priority for investment compared to corn, soybeans, cotton and rice, Burke and Lyon said.

“All the easy stuff’s been found,” Lyon said. “I think a lot of growers still believe something’s going to come along, a silver bullet to keep them going the way they’ve been going, and that’s not likely.”

Wheat remains a priority crop, the companies that produce the herbicides say.

“We have not forgotten about wheat,” said Kirk Sager, FMC technical support manager in Ephrata, Wash.

However, a new mode of action hasn’t been discovered and introduced into the market, for any crop, for more than 25 years.

“That hasn’t been for lack of effort,” said Curtis Rainbolt, technical service representative for BASF in Boise, Idaho. His company actively screens for new herbicide candidates. Some new herbicides have also been developed using existing modes of action.

Many factors go into developing a new active ingredient and bringing it to market, said Chris Clemens, an agronomy service manager for Syngenta.

“Bringing one new crop protection product to market costs about $286 million and takes 11 years of research and development,” Clemens said.

Researchers look for the lowest use rate that will enable the active ingredient to remain effective, while producing the highest possible profit margin for the grower, he said.

The Environmental Protection Agency recently began requiring companies to have a stewardship program in place as part of product registration, said Chad Shelton, global director of proprietary technologies for Albaugh, based in Rosalia, Wash.

He compared weed control products to other tools in the toolbox.

FMC recommends using the highest rate allowed by the label to cover the entire germination window and minimize escapes.

“Don’t cut rates to save money,” Sager said. “Every escape you have by using a low rate has the potential to be resistant.”

Rainbolt said growers must consider every available tool, even in the face of low wheat prices.

Using an additional herbicide with another mode of action may increase the short-term cost, but it will have a long-term benefit, he said.

Growers should also rotate crops, chemistries, modes of action and use products on the crop they need most — not every crop every year, Sager said.

“Every chemistry out there, they’re all at risk if we abuse them,” he said.

It used to be that half of the weed samples tested at WSU were not resistant, Lyon said. Now, “a good share” are, and to several herbicides.

Researchers check whether a weed can still be effectively controlled within the label use rate, but that’s relatively rare, Burke said.

Burke usually receives 70 to 100 weed samples a year. He advises patience. It takes nine months to a year to grow a plant out and spray it to determine resistance.

Having confirmation of resistance is good, but action is best, he said.

If resistance is likely — meaning there wasn’t some other problem with the herbicide application — the farmer should mow, till or pull the weeds or do whatever they can to make sure no seed is produced, Lyon said.

New alternative crops are part of the good news, but are still not as economically viable as winter wheat, Lyon said.

Adding forages for livestock, such as alfalfa, would reduce the weed seed bank. Allowing livestock grazing would eliminate the cost of cutting and hauling the forage crop, Lyon said.

Also, BASF recently invested in a hybrid wheat production program, slated to be available in the mid-2020s, in which the crop may be more competitive against weeds, Rainbolt said.

Many farmers use no-till practices in which plowing is kept to a minimum. Benefits include reduced erosion and improved soil health and better air and water quality, according to the Pacific Northwest Direct Seed Association.

Glyphosate is a non-selective and cost-effective herbicide that has been substituted for tillage to control weeds in no-till farming, Lyon said. It has allowed farmers to reduce or eliminate tillage and thereby greatly reduce soil erosion and improve soil health.

The association suggests solutions that don’t include heavy tillage but rely instead on crop rotation, cover crops and education to avoid establishing herbicide resistance in weeds, Meyer said.

Many soil conservation gains from reduced tillage are at risk, Burke said.

“We’ve done that on the back of herbicides,” Burke said.

The “golden age” of herbicides has ended, WSU’s Lyon said. The new era will look a lot like the old one, but herbicides won’t be relied on so heavily, he said.

“The old days of driving by your field and saying, ‘I guess I’ll go out and spray some 2,4-D on my weeds,’ are long gone,” Riggers, the Idaho farmer, said. “It’s much more complicated now.”

Riggers said growers will find ways to manage around the problem, but he worries about the damage done in the meantime.

“I really believe there will be farms that aren’t able to get on top of this,” he said. “It will be too late and they’ll get to a point where economically it makes it very tough to survive.”

From the Fields: Tim Boerner