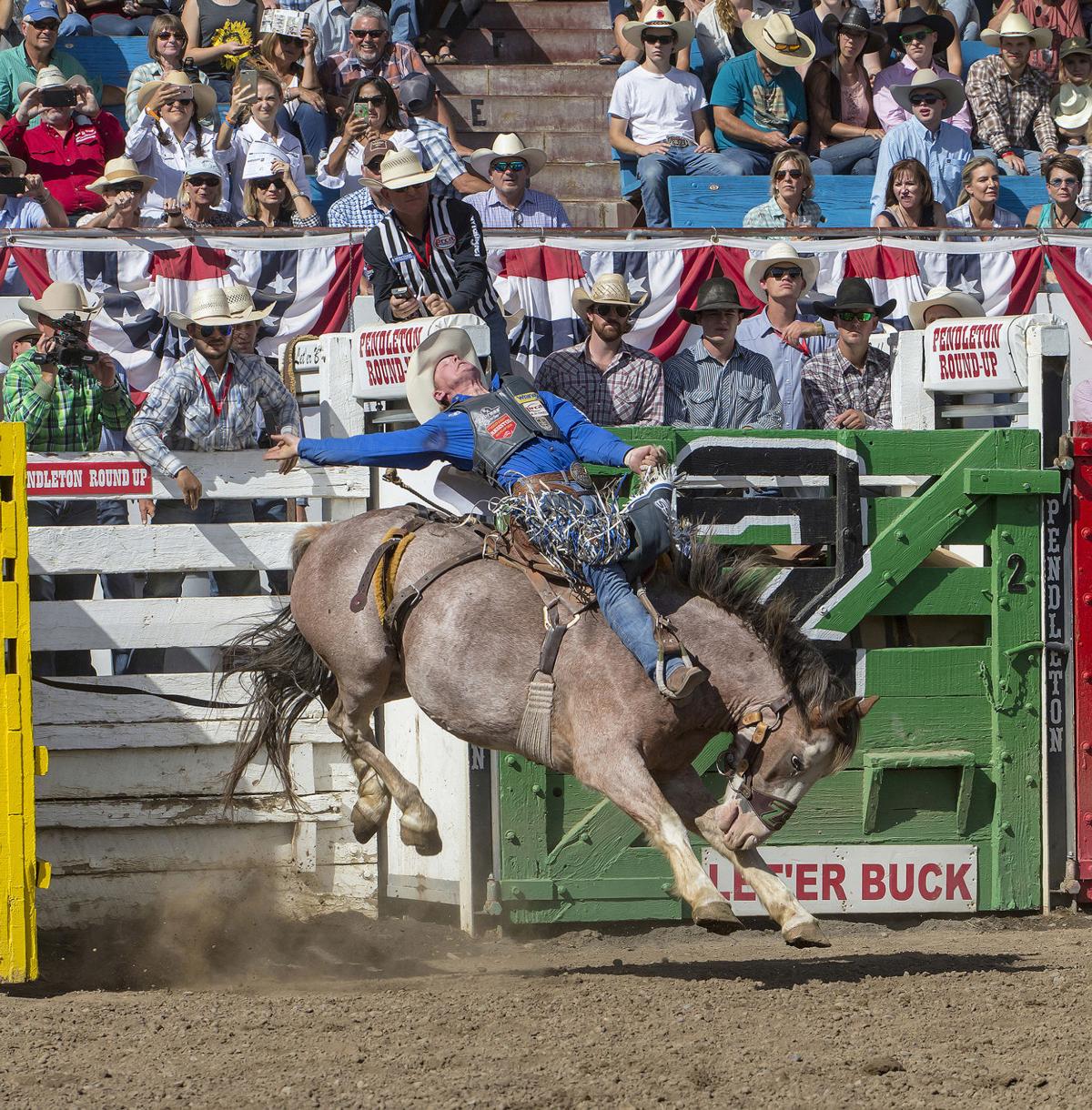 Spencer Wright of Milford, Utah bursts out of the chutes for an 86.0 point ride on the third day of the Pendleton Round-Up Friday, September 13, 2019. 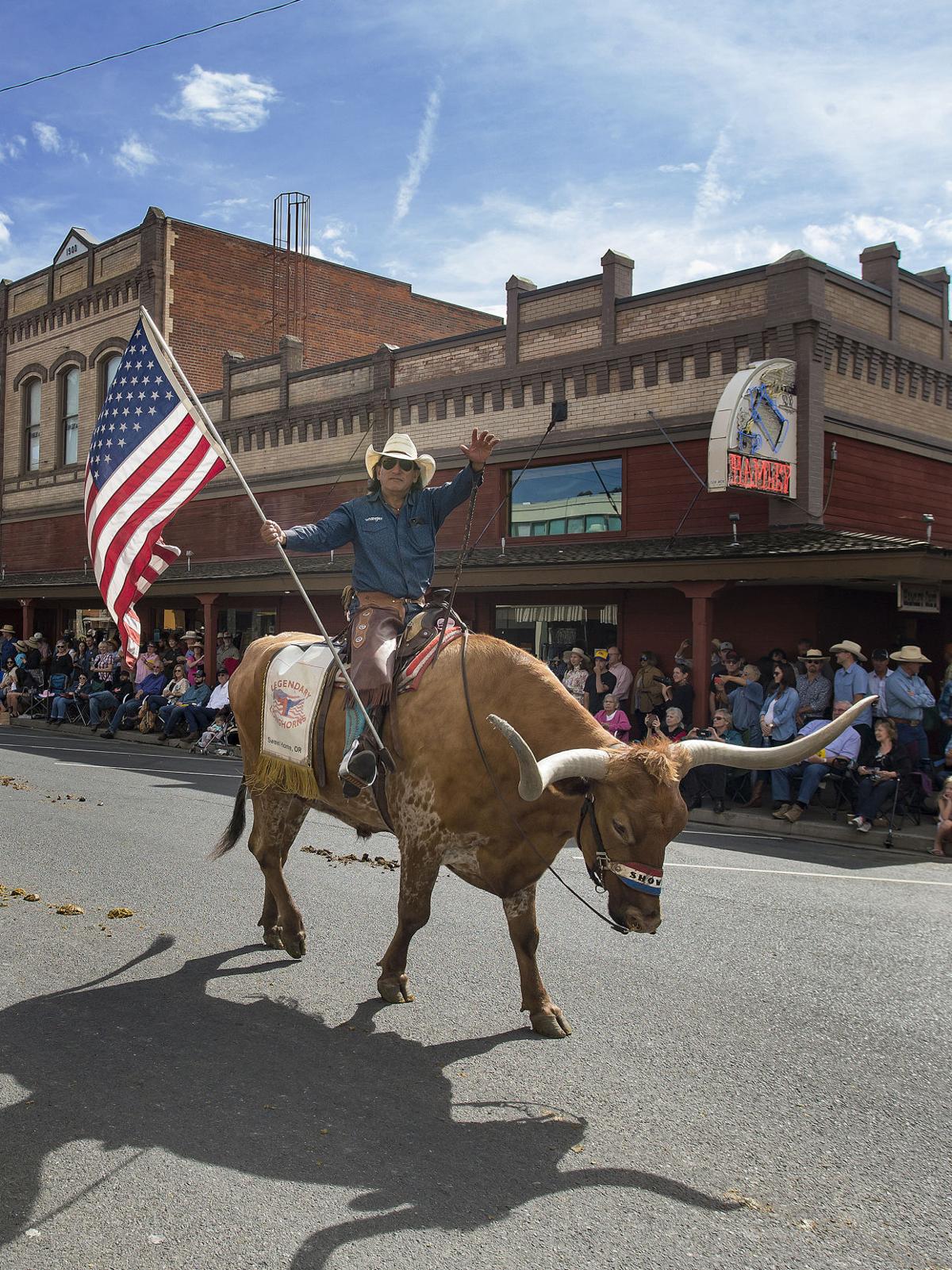 A rider with Legendary Longhorns rides a long horn down Court Ave. in Pendleton as a part of the Westward Ho! Parade on Friday, Sept. 13, 2019. 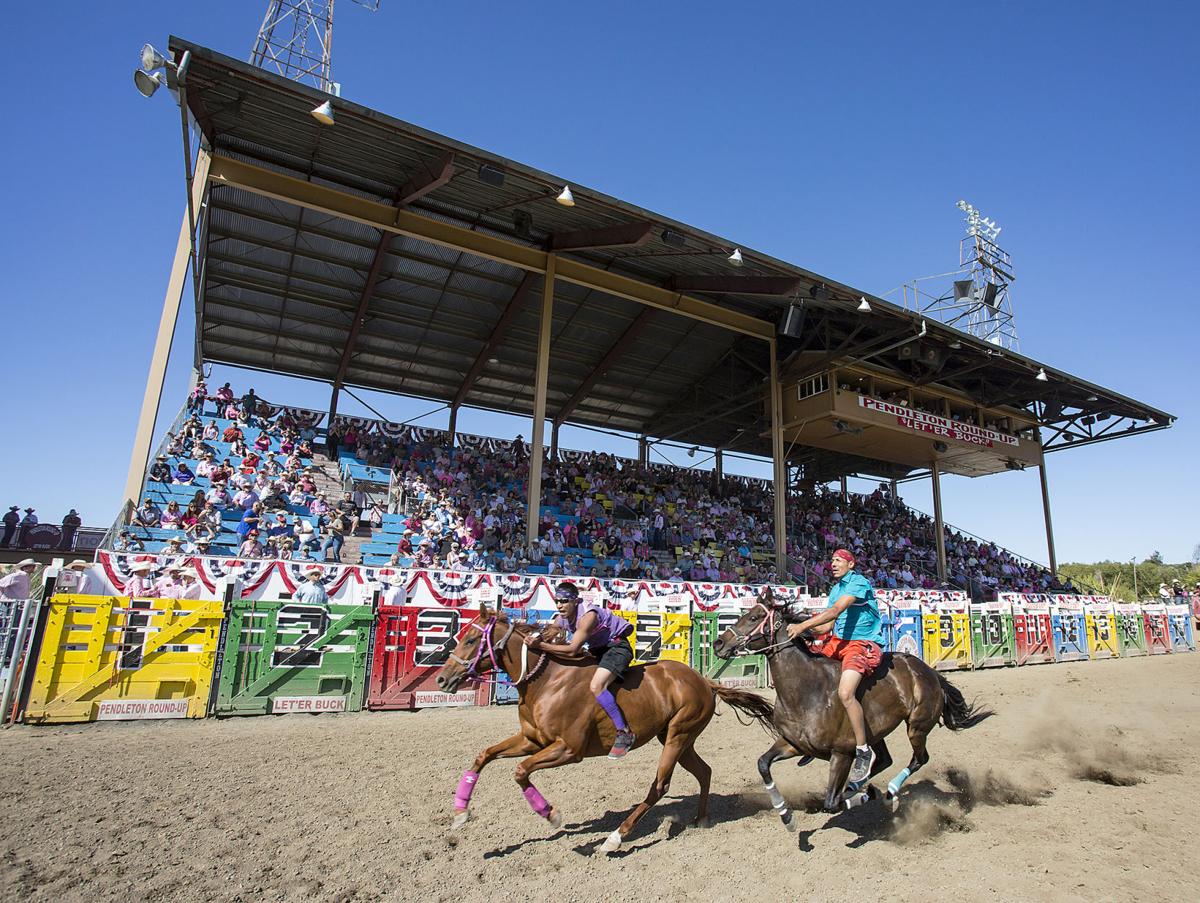 Competitors in the Indian Relay Race ride past the North grandstand Thursday, September 12, 2019 at the Pendleton Round-Up. 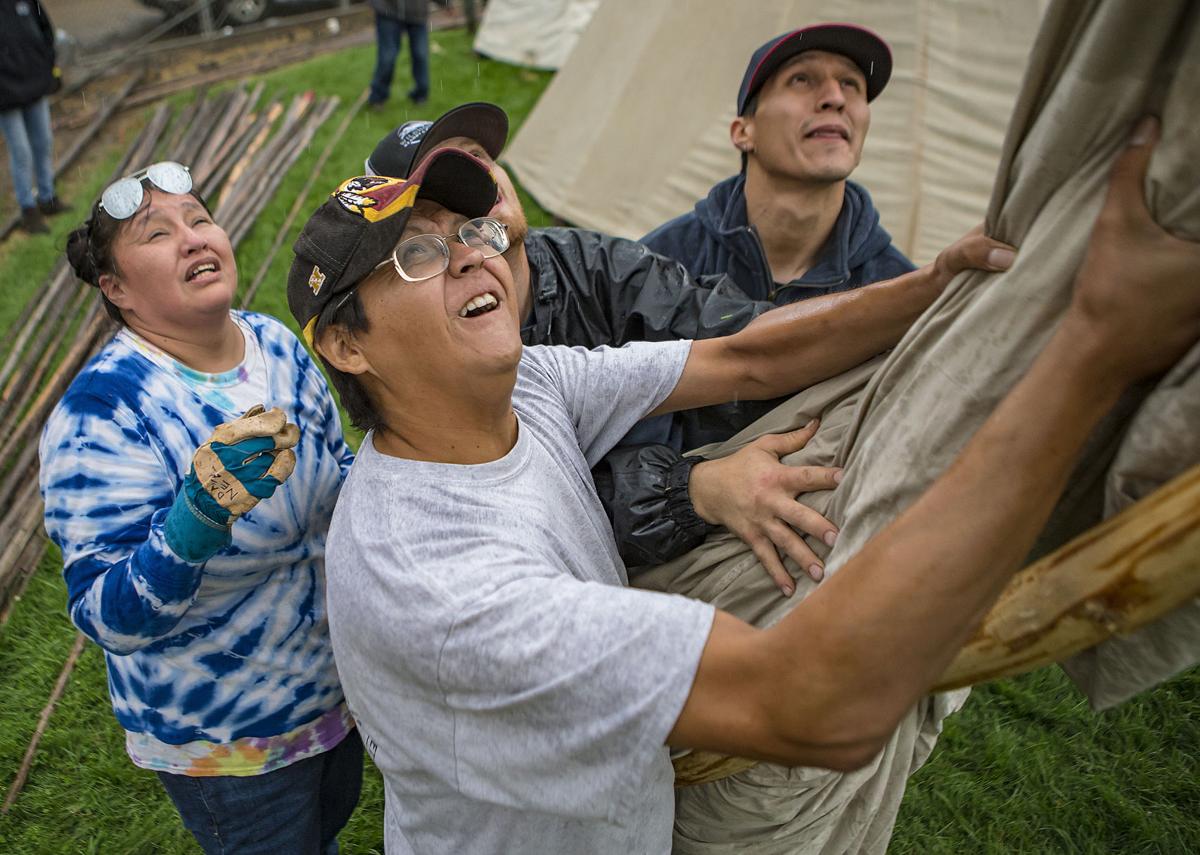 Jeremiah Farrow, second from left, assists a group in lifting a teepee pole into place during setup of the Indian Village at the Pendleton Round-Up early Sunday morning. 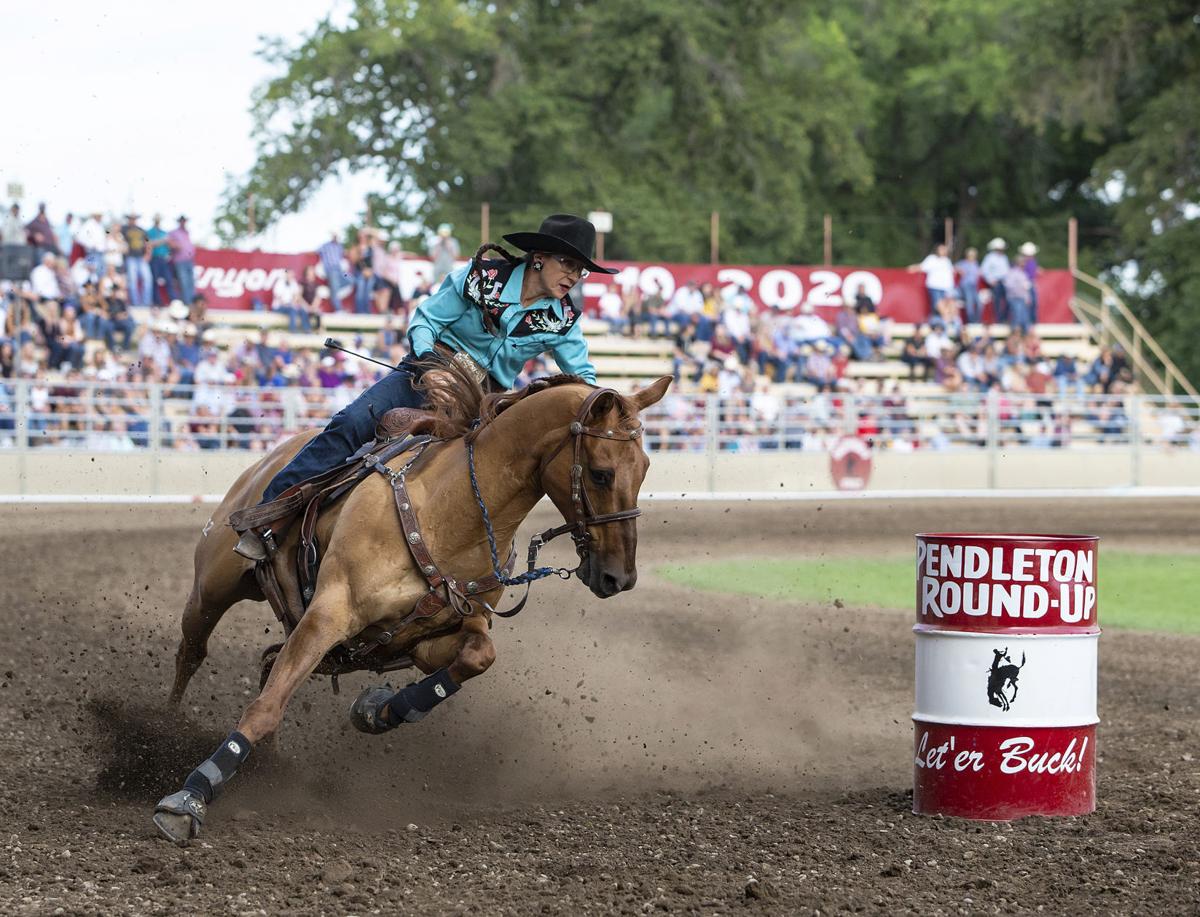 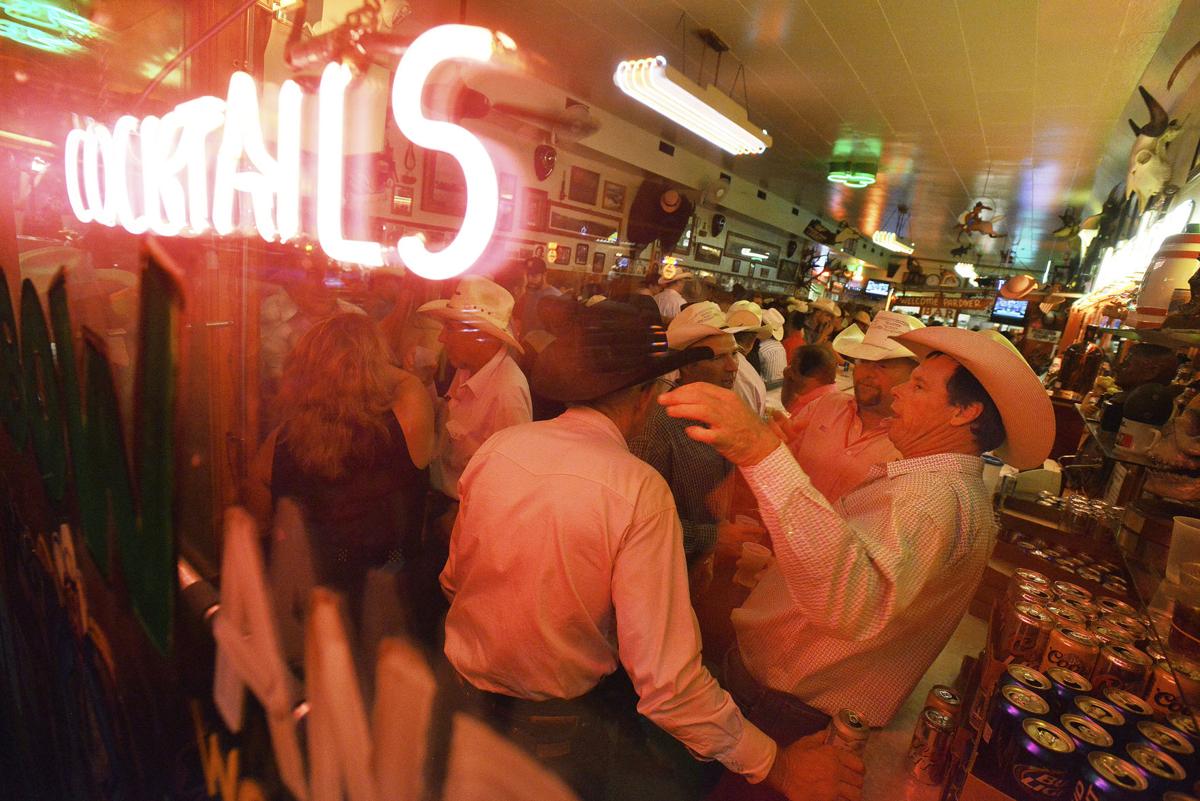 Rodeo fans pack in to the Rainbow Cafe on Thursday, September 12, 2013 as rodeo goers take to the streets of Pendleton for a little night life. 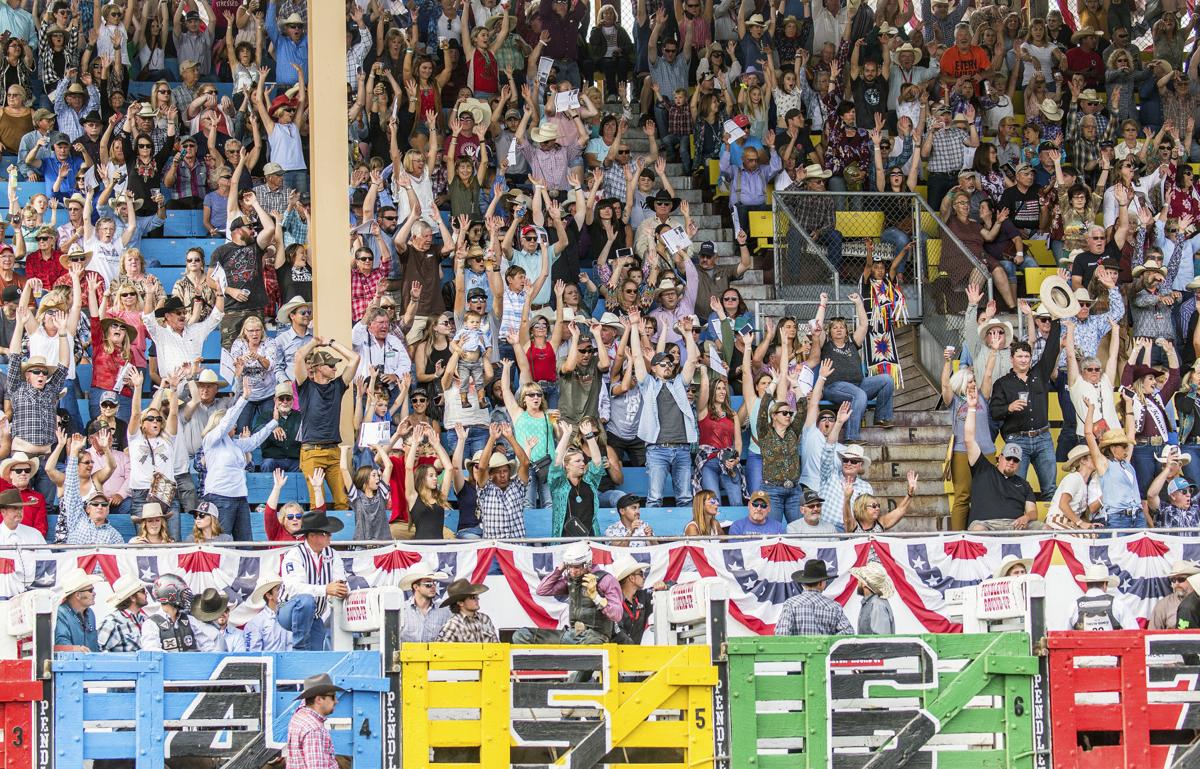 Spencer Wright of Milford, Utah bursts out of the chutes for an 86.0 point ride on the third day of the Pendleton Round-Up Friday, September 13, 2019.

A rider with Legendary Longhorns rides a long horn down Court Ave. in Pendleton as a part of the Westward Ho! Parade on Friday, Sept. 13, 2019.

Competitors in the Indian Relay Race ride past the North grandstand Thursday, September 12, 2019 at the Pendleton Round-Up.

Jeremiah Farrow, second from left, assists a group in lifting a teepee pole into place during setup of the Indian Village at the Pendleton Round-Up early Sunday morning.

Rodeo fans pack in to the Rainbow Cafe on Thursday, September 12, 2013 as rodeo goers take to the streets of Pendleton for a little night life.

PENDLETON — The second full week of September means only one thing in Pendleton.

Round-Up is back. Time to Let 'er Buck.

Tens of thousands of people from across the country and around the world fill the city each year for Oregon's legendary rodeo and celebration of the American frontier. Cowboys in Stetson hats and Indians wearing colorful regalia march through downtown for festive parades, while contestants inside the stadium rope, ride and race their way to victory.

Visitors, meanwhile, pump millions of dollars into the local economy, staying at hotels, eating at restaurants and dancing at bars until the wee hours of the morning.

Attendees come from as far as Europe and China, as well as Portland metro where urban dwellers make the three-hour drive on Interstate 84 following the Columbia River like a reverse-Lewis and Clark. Once they arrive, they are greeted by the grass arena, teepee village and iconic bucking horse statue.

"It's truly like going back in time," O'Neill said. "When you come here, you just feel compelled to put on a cowboy hat and marvel in the culture."

The first Pendleton Round-Up was held in 1910, and rodeo directors today are careful to preserve the historical feel and heritage of the Old West.

No advertising or sponsor flags are allowed in the arena, where bucking bulls and broncs still come charging out of brightly painted wooden chutes onto the only grass infield in professional rodeo. Hundreds of teepees adorn Indian Village behind the north grandstands, passed down through generations of tribal families.

Tradition plays a big role in attracting old and new fans alike, O'Neill said. The Professional Rodeo Cowboys Association has voted the Round-Up as the Large Outdoor Rodeo of the Year each of the last four years, and six times overall since 2003.

For Pat Beard, manager of the Pendleton Convention Center, the Round-Up has been part of his own family's tradition since 1938.

Like his father and grandfather, Beard is a lifelong rodeo cowboy who competed in bronc riding at the Round-Up in years past. His brother, Casey Beard, retired just last year after serving as the first Round-Up general manager, and his daughter, Mackenzie Beard, was a Round-Up Princess in 2009 and Queen in 2011.

"It's the greatest Western spectacle on the face of the planet," Beard said.

Apart from the rodeo, there is also the Westward Ho! Parade — the largest completely non-motorized parade in the country — held Friday morning of Round-Up week, with horses and horse-drawn wagons replacing standard floats and fire trucks.

The Main Street Cowboys, an organization of community volunteers, puts on the "Greatest Free Show in the West," organizing an outdoor carnival, vendors, Dress-Up Parade and multiple stages with live music, performers and entertainers.

Then there is the Happy Canyon Night Show, which tells the story of American Indian life on the Columbia Plateau before, during and after the arrival of white settlers, followed by a second act of Wild West slapstick and showmanship.

"It is the bedrock of Americana, the Pendleton Round-Up," Beard said. "You can just sit and take it all in."

'These are real people'

Another defining characteristic of the Round-Up is participation from the local Umatilla, Cayuse and Walla Walla tribes, whose reservation lies just east of Pendleton.

In the book "Pendleton Round-Up at 100," Bobbie Conner, director of the Tamástslikt Cultural Institute, writes that tribal engagement dates back to the first Round-Up and has its roots in the literal wild horse roundups by tribesmen during the spring, summer and fall.

Despite the wounds of forced assimilation and loss of tribal lands in previous decades, Conner writes that the Round-Up "presented an opportunity to do what we had done countless times over our very long history — camp with relatives and friends, feast, gamble, race horses, parade, sing and dance."

With more than 300 teepees set up each year, the Indian Village is now the single largest encampment of tribal people locally, and the largest Indian encampment on the professional rodeo circuit.

Don Sampson, chief of the Walla Walla Tribe, said camping spots in Indian Village have been passed down within families through generations. He remembers attending the Round-Up every year as a child, when elders in the village would bring old wood stoves and cook stews with salmon, deer and elk meat.

"Those were good days," Sampson said. "The Pendleton Round-Up is a big family reunion and a gathering of the tribes."

Setup for Indian Village takes place Sunday morning during Round-Up week. An experienced tribal member can usually set up a teepee in about 45 minutes, Sampson said. The tribal chiefs are the authority in the village, and help to resolve any problems that might arise.

Sampson, whose native name Peo Peo Mox Mox means "Yellow Bird," said tribal members come from across the U.S. and Canada for Round-Up, bringing with them traditional regalia and cultural heirlooms such as beaded buckskin dresses and horse masks.

A powwow and ceremonial dance competition kicks off the final day of Round-Up inside the arena, which Sampson said brings in contestants from all over the country. Winners are chosen based on style, rhythm and dress, and receive prizes including blankets from the Pendleton Woolen Mills.

The Round-Up would not be the Round-Up without the tribes, Sampson said. He wants people to know that the native culture and lifestyle are still strong.

"Here in Pendleton, these are real people. It's not a Wild West show," Sampson said. "We still gather, sing our traditional songs ... It's a source of pride."

From the ticket office to the after-party, Round-Up has an undeniable economic impact in Pendleton and throughout Eastern Oregon.

Gail Nelson, economic development and tourism coordinator for Umatilla County, said every one of Pendleton's 1,200 hotel and motel rooms and 500 RV parking spaces are full during the week. The next closest cities within a 50-mile radius are Hermiston, La Grande, Milton-Freewater and Walla Walla, where guests can search for a place to stay.

One week of Round-Up can generate enough business to last for the entire year for some restaurants and shops.

"Round-Up is still king, as far as events go," Nelson said. "It definitely affects everybody in the town of Pendleton."

While there is no official economic impact study of Round-Up, Nelson was able to crunch the numbers to get a general picture of what the massive rush of tourism means for the city.

Assuming one person from out of town stays for four days, Nelson figures that individual would spend about $1,620 on average, including tickets, hotel rooms, gas, souvenirs, food and drink.

If Round-Up draws 50,000 visitors, that adds up to $81 million for the week. Each dollar also circulates through the community three times, resulting in a direct economic impact of $243 million.

Richard Stapleman, a former rodeo cowboy who now makes custom-fitted boots, said Round-Up literally launched his business when he opened his downtown storefront in 2012. That one week earned him about a six-month backlog of work, he said, which has since grown to about 16 months.

Round-Up now accounts for about two-thirds of his overall sales, Stapleman said.

"The week is really good, but the next three weeks after Round-Up are five times better," Stapleman said. "Those folks didn't know they would see a boot maker, or hat maker, or belt maker. So they come back to place their orders."

Tim Guenther, who with his wife, Jennifer, owns Prodigal Son Brewery and Pub, said serving the crowds requires "all hands on deck" throughout the week.

"It's the busiest week of the year, for sure," Guenther said.

Round-Up is truly a party atmosphere, which lends itself well to bars and restaurants. Tourists also relate well to the authentic experience that Pendleton offers, Guenther said.

"I think people react well to that vibe," he said. "If you like to eat and drink, you're going to have a good time."

Since the Round-Up's centennial in 2010, O'Neill said attendance has only continued to rise, which he credits in part to how they have marketed the event.

"It's been our mindset to grow new fans worldwide, and fans of all ages, because we have so much more to offer than just rodeo," O'Neill said.

In 2015, singer-songwriter Sufjan Stevens released a 75-minute documentary about the Round-Up which was screened at the Brooklyn Academy of Music. O'Neill said the film reached out to new fans, highlighting the artistic and cultural appeal of the event. Stevens also composed a musical score for the documentary.

The Round-Up also partnered last year with Travel Oregon, sending a delegation to the Netherlands and encouraging Dutch tourists to come vacation in Pendleton and experience the American West.

"We are telling a wonderful story about American heritage," O'Neill said. "When people can see that and experience that, coming to this community, they just become fans for life."

Kristen Dollarhide, travel and hospitality director for Travel Pendleton — part of the Pendleton Chamber of Commerce — said the people of Pendleton is what makes the Round-Up special. By experiencing Pendleton during the Round-Up, Dollarhide said visitors are likely to come back for future trips and exploring the region.

"It's the whole package," Dollarhide said. "Pendleton is really known for our hospitality."

"You have an entire community that stops and marks time," Beard said. "It leaves a mark on them. They take it with them."