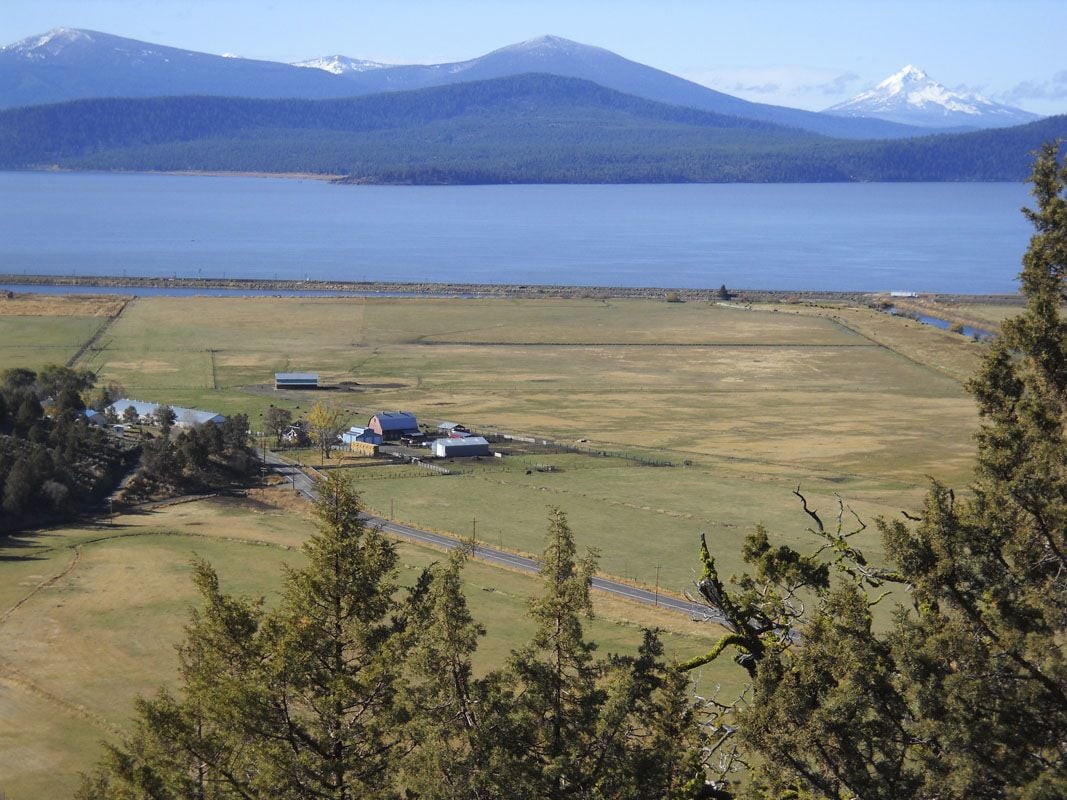 Photo of Kathleen Buchanan This is the view from the Buchanan Angus Ranch near Klamath Falls, Ore. “The rewards here are visual,” Bob Buchanan says.

Photo of Kathleen Buchanan Bob Buchanan and his dogs work cattle on the Buchanan Angus Ranch a couple miles north of Klamath Falls. Buchanan has been in the Black Angus ranching business for over 50 years.

Photo of Kathleen Buchanan This is the view from the Buchanan Angus Ranch near Klamath Falls, Ore. “The rewards here are visual,” Bob Buchanan says.

Photo of Kathleen Buchanan Bob Buchanan and his dogs work cattle on the Buchanan Angus Ranch a couple miles north of Klamath Falls. Buchanan has been in the Black Angus ranching business for over 50 years.

They came in the form of little black calves, one after another until there were eight on Christmas Day 2012. The Buchanans were close by for each of the births. The couple are longtime owners of the Buchanan Angus Ranch, located a few miles north of Klamath Falls, Ore., and raising healthy calves is their livelihood.

“Some people do their job and don’t see an end result,” he added. “The rewards here are visual.”

That would be seeing their 130 purebred black Angus mother cows give birth without any complications, resulting in newborns. But if there are birthing issues, the Buchanans are close at hand and are veterans at helping with the process.

“You’re basically pouring your heart and soul into helping them survive,” Buchanan said of the cows and calves. “Even when it’s cold and blowy, I love being outside, I love being independent. We’ve been fortunate enough to make a living doing something we love to do.”

Buchanan said his cows are artificially inseminated to the best sires available in the Angus breed. The characteristics of the calves are moderate birth weights, but then rapid growth by feeding on their mothers’ milk and by grazing on the native pastures. Those genetics are passed on to their own calves. The ranch doesn’t own a creep feeder.

The Buchanan bulls are sold at 12 to 15 months of age at the ranch’s own bull sale in February at the Klamath County Fairgrounds in Klamath Falls. The sale also includes a few consignment bulls from Buchanan heifers that are now in the herds of other ranches.

“It’s a good old fashioned country western hospitality event,” Kathleen Buchanan said of the bull sale weekend that starts with a showing and barbecue dinner Saturday night and the auction at noon Sunday.

The Buchanan heifers are sold privately from the ranch, either individually or in groups to both purebred and commercial operations.

Bob and Kathleen Buchanan grew up around animals in the Klamath area. Their families were long-time friends and the two of them were in 4-H together.

At age 6, Bob Buchanan led his first Hereford heifer down the road to a neighbor’s ranch to be bred by an Angus bull brought from Illinois by rancher Scott Warren. The resulting calf was black with a white face.

“Bob had the first black baldy calf in the county as far as we know,” Kathleen Buchanan said. “For that time, it was a unique combination. Scott took Bob and the cow and calf around to show at a lot of events.”

Warren had started the Algoma line of Black Angus and Bob Buchanan got his first registered Angus heifer from Warren in the mid-1960s. When Warren retired in the late 1960s, he sold part of his Angus herd to Bob Buchanan.

Although Bob Buchanan attended Oregon Institute of Technology in Klamath Falls and earned a mechanical engineering degree, his intent was always to be a rancher. He said he went to OIT so he’d be close to home and could continue to run cattle in between classes and studying.

He bought property from his grandparents in the 1970s and he and Kathleen have built their ranch up to 600 acres over the years. It’s just about a half mile from where Bob was raised.

“It’s still fun,” Bob Buchanan said of ranching. “Sometimes it’s cold and miserable, but you can’t tell a cow when to calve. I tell people we don’t own the cows, they own us.”

Acreage: 600 for pasture and hay