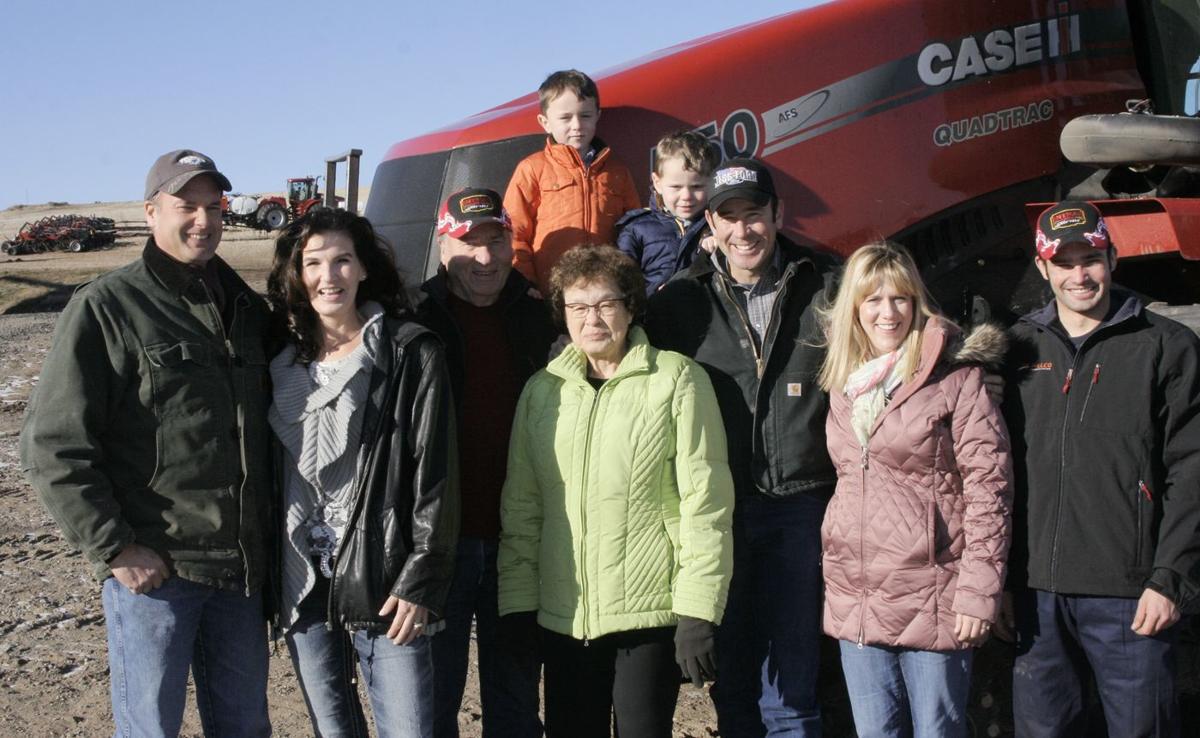 Matthew Weaver/Capital Press The Emtman family - Randy, Lisa, Roy, Jr., Jaeger, Della, Gus, Jeff, Jessica and Greg - recognizes the value of farming together on their family's land in Valleyford, Wash. The United Nations is working to increase awareness of the value of family farming with the International Year of Family Farming in 2014. 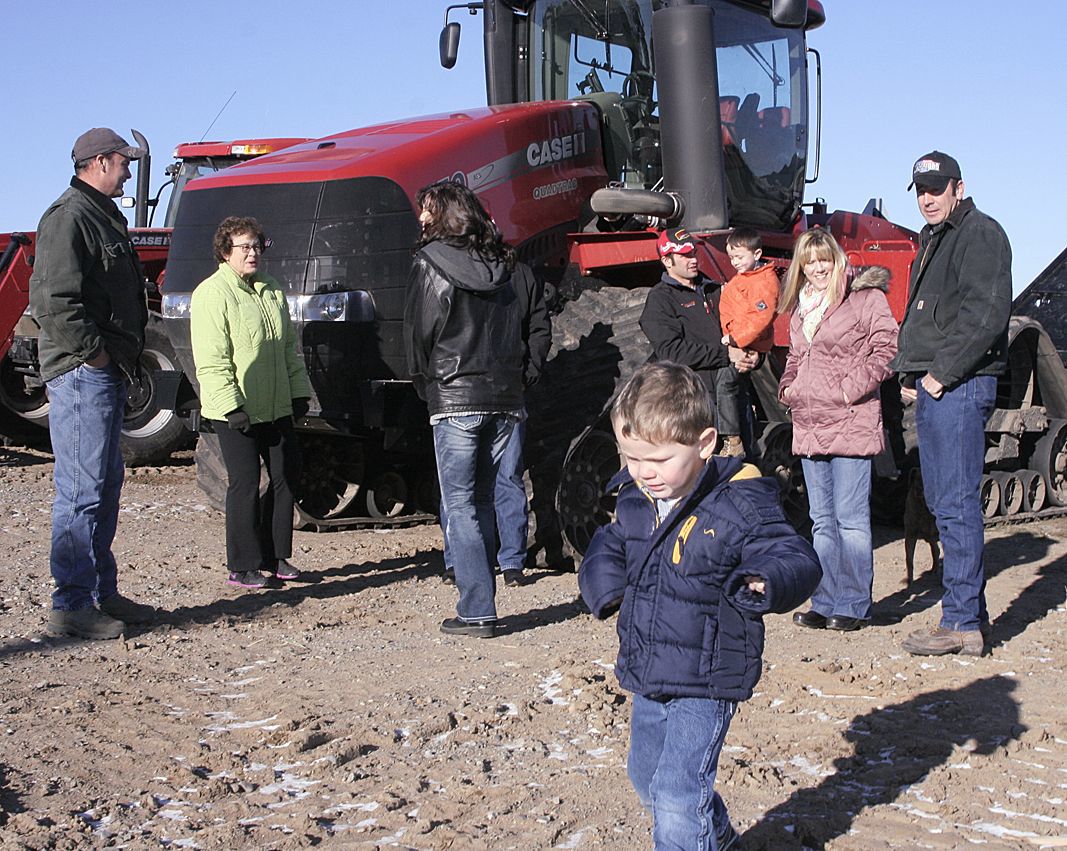 Matthew Weaver/Capital Press Gus Emtman, 3, front, walks around on his family's Valleyford, Wash., property while his family looks on the morning of Dec. 4. Gus is part of the fifth generation of the Emtman family farming on the land. The United Nations has declared 2014 the International Year of Family Farming.

Matthew Weaver/Capital Press The Emtman family - Randy, Lisa, Roy, Jr., Jaeger, Della, Gus, Jeff, Jessica and Greg - recognizes the value of farming together on their family's land in Valleyford, Wash. The United Nations is working to increase awareness of the value of family farming with the International Year of Family Farming in 2014.

Matthew Weaver/Capital Press Gus Emtman, 3, front, walks around on his family's Valleyford, Wash., property while his family looks on the morning of Dec. 4. Gus is part of the fifth generation of the Emtman family farming on the land. The United Nations has declared 2014 the International Year of Family Farming.

VALLEYFORD, Wash. — Whether they’re in the wheat fields during harvest, in the shop working on one of their hulking combines or marketing their cattle, farmers Randy and Jeff Emtman are almost always surrounded by family.

Emtman Brothers Farms raises wheat, legumes, hay, canola and cattle on 11,000 acres. The farm dates back to the 1870s, when Randy and Jeff’s great-grandfather, John Emtman, arrived from Germany and homesteaded in the area.

Working together, the family has built the farm into a thriving operation through its many economic advantages, Randy said.

“If the three of us had our own farming operations, just in the needs for equipment, each farm would have to have a certain piece of equipment,” he said. “Combining forces here, we would only need one of a specialty-type item.”

“As a team, we probably cover everything better than we would individually,” Randy said. “There’s a dynamic involved working with family you don’t get anywhere else.”

The Emtmans’ farm is one of about 2.1 million family farms in the U.S., according to the USDA Economic Research Service. Worldwide, there are about 500 million family farms across the developing and developed world, according to the U.N. Food and Agriculture Organization. Family farms come in all shapes and sizes, from sprawling multi-generational operations like the Emtmans’ to a retired couple’s 2-acre plot that provides vegetables for the local farmers’ market. Families gravitate to farms as both an economic opportunity and a lifestyle.

But family farms are more than that, according to a leader of an upcoming international celebration of family farms.

“It is worth celebrating family farming because, in all its diversity, it is the model of food production that really feeds the world, while caring for the earth,” said Jose Osaba of World Rural Forum, an association that promotes rural issues. “Seventy percent of the world’s food production is provided by family farmers.”

More than 42 countries, including the United States, will participate in the celebration.

“We have organizations representing farmers themselves, consumers, co-ops, international development, conservation, hunger and renewable energy,” he said. “Those are all part of what family farming is all about in this country and around the world.”

Johnson said other organizations will also be invited to participate in events highlighting family farmers.

Every generation has become farther removed from the family farmers who produce the food, particularly in developed countries like the United States, Johnson said.

“This is one way of highlighting what farmers do and re-establishing that connection, not only to the production of food, but how that food provides nutrition, how the earth is cared for and how we help our fellow human beings who may be suffering from hunger,” he said.

Rebecca Middleton, chief operating officer of the non-profit Alliance to End Hunger, said family farmers are a critical part of the solution to ending hunger in their communities and around the world.

“Family farmers bring a critical voice to civil society as they engage with their government around policy for food security and nutrition,” she said.

Osaba said the international year is already a success in many ways. It has already gained a place on the agendas of many institutions and associations working in rural development, agriculture and the food industries, he said, and now is the time to seize the momentum in the political arena by encouraging national and local governments to encourage family farms.

“There are so many arguments in favor of family farming that we are sure many results will come out of the year,” he said.

Randy Emtman is proud to be a fourth-generation farmer. His oldest son, Greg, returned to the farm nearly two years ago after graduating from Washington State University. Greg has shown interest in the trucking aspect of the business, delivering crops to market and bringing in inputs like seed and fertilizer.

“Working with family all the time is the biggest appeal to it,” Greg said.

“It makes me feel really good,” Randy said. “When the boys were little, it was my hope they would have an interest in farming. It’d be kind of a neat deal to go to work every day and be able to work side-by-side with your son. Jeff and I really liked being able to go to work with our dad every day.”

Randy hopes the International Year of Family Farming sends a positive message about family farming to the public.

“People are very negative about corporate farms,” he said. “They think that any farm that is owned by a corporation, that’s a bad deal, but there’s a lot of family farms that are incorporated for the advantages in taxes and generational transfer. If we didn’t use the best methods possible, there could be large inheritance taxes, which is a financial drag on the farm.”

Jeff doesn’t always agree with the U.N.’s policies, but said the International Year of Family Farming gives him hope. He believes it indicates the U.N. sees family farms as sustainable.

“We go to work not thinking about just our generation but trying to figure out how to provide that opportunity to the next generation,” he said.

Non-family operations might not use the same perspective when considering downturns in commodity prices, he said.

“They might say, ‘Let’s sell the farm and invest in something else,’” Jeff said. “If you’re thinking of the next generation, you’re going to try to weather the down times and be there for the good times.”