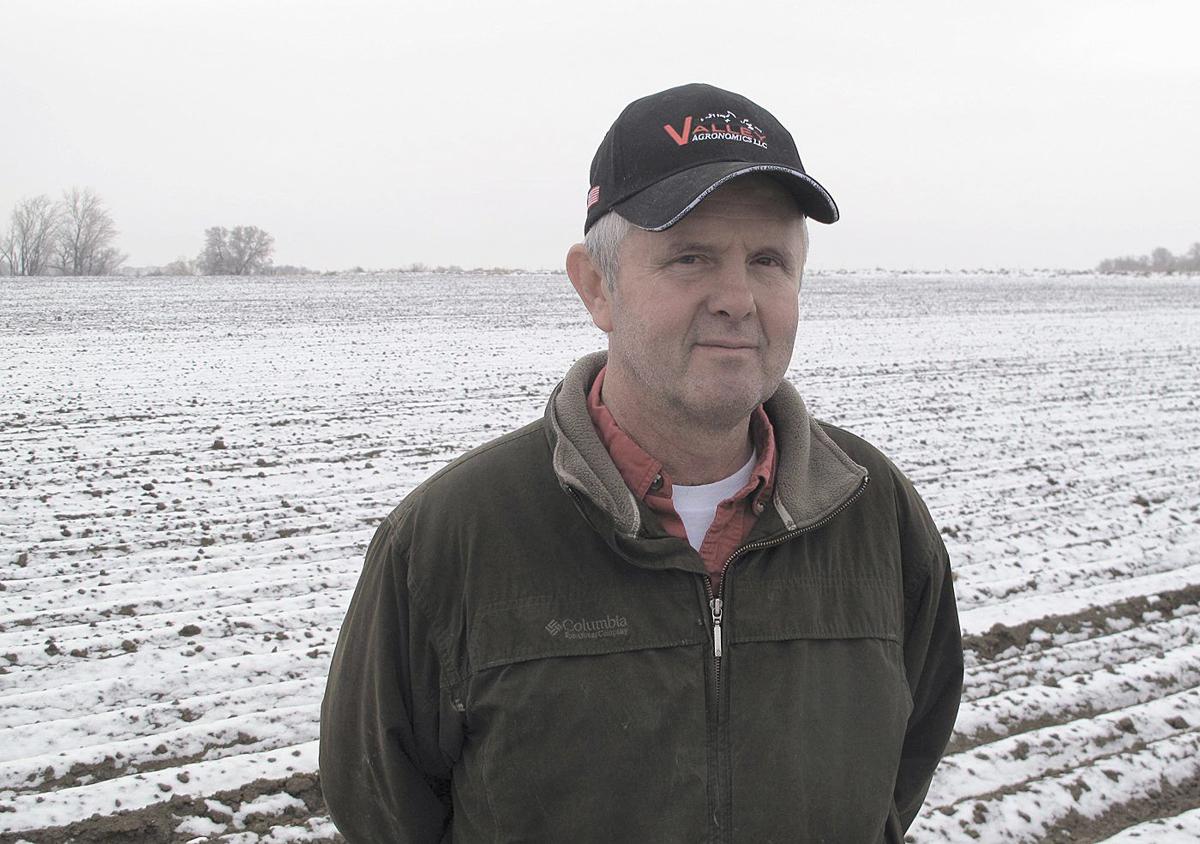 Sean Ellis/Capital Press Eastern Oregon farmer Craig Froerer stands in a 34-acre field near Nyssa, Ore., Dec. 3. The field was bedded and fumigated for onions last year but left idle in 2014 because of a lack of irrigation water. About 15-20 percent of farm ground in the county was left fallow this year because of the tight water supply situation. 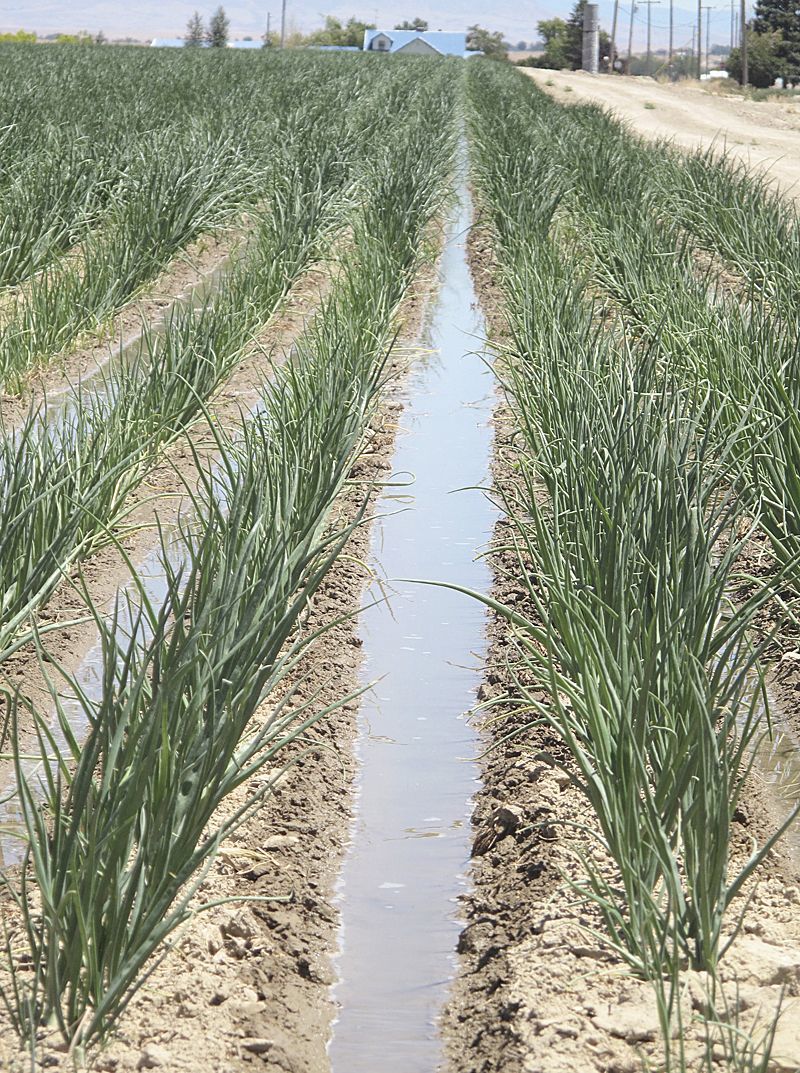 Sean Ellis/Capital Press An onion field near Ontario, Ore., is irrigated earlier this year. Because of a severe water shortage this year, Eastern Oregon farmers left a lot of ground idle and saved most of the available water for onions, the area's cash crop.

Sean Ellis/Capital Press Eastern Oregon farmer Craig Froerer stands in a 34-acre field near Nyssa, Ore., Dec. 3. The field was bedded and fumigated for onions last year but left idle in 2014 because of a lack of irrigation water. About 15-20 percent of farm ground in the county was left fallow this year because of the tight water supply situation.

Sean Ellis/Capital Press An onion field near Ontario, Ore., is irrigated earlier this year. Because of a severe water shortage this year, Eastern Oregon farmers left a lot of ground idle and saved most of the available water for onions, the area's cash crop.

The irrigation supply for farmers in Malheur County who get their water from the Owyhee Project began to run out in July this year and was completely shut off in August, two months earlier than normal.

That happened despite the fact that the annual irrigation allotment for farmers who get their water from the Owyhee Irrigation District was already slashed from the usual 4 acre-feet to 1.7 acre-feet this year.

“It had a huge negative impact,” Nyssa farmer Craig Froerer said about the sparse water supply this year. “We definitely need this drought to go away.”

The Owyhee Project supplies water to 118,000 acres of irrigated land west of the Snake River. About 1,800 farms depend on the water, most in Eastern Oregon and some around Homedale and Marsing in Southwestern Idaho.

Owyhee Reservoir was designed to hold a two-year supply of irrigation water. But that area has now suffered through three straight dry years.

Onions are the main cash crop in this area. Many farmers left ground idle or planted less water-intensive crops this year to ensure they had enough water for their onion crops.

Oregon State University cropping systems extension agent Bill Buhrig estimates about 15-20 percent of farm ground in the county was left idle this year as a result of the drought.

In some areas, where water was most scarce, as much as one-third of the farm ground was left idle.

OSU extension agents will estimate the drought’s economic impact on Eastern Oregon agriculture when the USDA data becomes available, but based on interviews with farmers, it’s likely in the tens of millions of dollars.

Farm cash receipts in Malheur County totaled $359 million in 2012, according to the Census of Agriculture.

Because farmers adjusted their operations to deal with the expected water shortage by reducing acreage and planting crops that use less water, most of the crops that were planted came out average to above-average, Buhrig said.

But all the ground that was left idle had to have had a major impact, he added.

Farmers didn’t decrease their onion acreage; they left a lot of ground idle that would have gone to other crops, such as corn and sugar beets, said Nyssa farmer Paul Skeen, president of the Malheur County Onion Growers Association.

“Those who have onions ... left ground idle so they could keep enough water to finish off their onion crop and they were successful at doing that,” he said.

Sugar beets and corn, both high-water crops, were the biggest losers in the area this year in terms of acreage declines due to the water scarcity.

About 26,000 acres of grain and silage corn and 8,700 acres of sugar beets are normally grown in Malheur County each year but sugar beet acreage dropped to 4,700 this year and corn acreage was down by about half, Buhrig said.

“All your expenses are still there and you’re literally not generating anything off of it,” he said. “It had to have had a big effect on a lot of farmers who had to cut out all that ground.”

Skeen and other farmers also planted more crops that use less water or are shorter-season varieties. Skeen grew a lot more peas and wheat “so I could have enough water to finish off the onions.”

Like many farmers in the area, Froerer moved some of his onions to parts of the valley that had more water. He also didn’t plant corn and sugar beets and planted more seed peas, which use less water.

He’s concerned about the impact the lack of water had on his asparagus and mint crops. It appears the crops sustained damage but the extent won’t be known for at least a year and maybe longer, he said.

Froerer estimates the tight water situation had about a $1 million impact on his farm, and his is just one of 1,100 farms in Malheur County.

Farmers on the upper part of the Owyhee system on the benches and in the foothills who are totally reliant on water stored in the reservoir were hit the hardest, said Owyhee Irrigation District Manager Jay Chamberlin. That included about 50,000 acres.

“Those are the ones that really took a hit this year,” he said.

For example, Froerer left 347 of his 1,000 acres of farm ground on the benches idle this year.

Those on the lower parts of the system were impacted less because they had access to supplemental water pumped from the Snake River.

Reid Saito is one of the more fortunate farmers who had access to supplemental water but he also made major changes in acreage. That included cutting back on sugar beet and onion acreage. He also planted a lot more wheat and eliminated grain corn.

Idaho growers near Homedale and Marsing who get their water from the Owyhee Project also took a big hit this year. A lot fewer dry bean acres were planted as a result of the scarce water supply, said Treasure Valley Seed Co. Production Manager Don Tolmie.

“There was a lot of hesitancy to plant beans because of that,” he said. “They just didn’t have the water. What could you do?”

A lot of land in those areas was also left fallow, Tolmie said. “It was the same story on the Idaho side. They had to cut way back on those longer-season crops; there just wasn’t enough water.”

The net result of the idled acreage and crop switches was that the valley’s important onion crop came through fine.

Too well, in fact.

About 11,000 acres of onions are typically planted on the Oregon side of the Snake River and 9,000 on the Idaho side, but industry leaders said that number was up about 8 percent this year. That was accomplished by idling a lot of ground that would have grown other crops so the water could be used for the onions.

And many growers this year switched their onions to a drip irrigation system, which increased yields.

He also said Washington onion growers, who usually export a good portion of their crop to Pacific Rim nations, have been selling more of their crop into the domestic market because of the congestion at West Coast ports due to union labor unrest. That has further depressed prices.

“As a result, right now onion prices have really dropped off,” Saito said. “That was something we didn’t anticipate. Right now our cash crop isn’t doing quite as good as we had hoped it would do.”

He said jumbo yellows, the most common type of onion produced in this valley, are selling for between $4.50 to $5 per 50 pounds “freight on board” right now. During harvest time, they were selling for nearly $8.

“You make nothing on that ground you left idle because you were banking on the onion deal and now the onion deal is in the toilet,” Skeen said. “It was a huge hit and it’s being exacerbated by a not-very-good onion market right now.”

Chamberlin said the prospects for next season aren’t much better. The project normally carries over between 350,000 to 500,000 acre-feet of available storage water but only carried over 8,000 acre-feet this year.

Recent rainstorms have resulted in a small increase in stream flows, and the average snowpack in the Owyhee basin was 102 percent of normal as of Dec. 5.

Available storage in the reservoir is up to 30,000 acre-feet right now but that’s a drop in the bucket compared with what the system needs to ensure an adequate water supply in 2015, Chamberlin said.

“We have a long ways to go before we recharge the storage in the reservoir,” he said. “Let’s hope those storms keep coming. I don’t want to go through another year like this last one.”

According to Ron Abramovich, a regional water supply specialist with the Natural Resources Conservation Service, the forecasts call for the weather pattern in the region to be similar to last year, which was hit-and-miss for the region in terms of moisture.

While plenty of storms provided the Boise River basin with adequate snowpack last year, they mostly skipped the Owyhee basin.

At this point, farmers in Eastern Oregon are just hoping for the best.

Skeen said this is by far the worst stretch of tight water years he has seen in his 42 years of farming.

“Am I giving up? Absolutely not,” he said “But I worry about it like I’ve never worried before.”