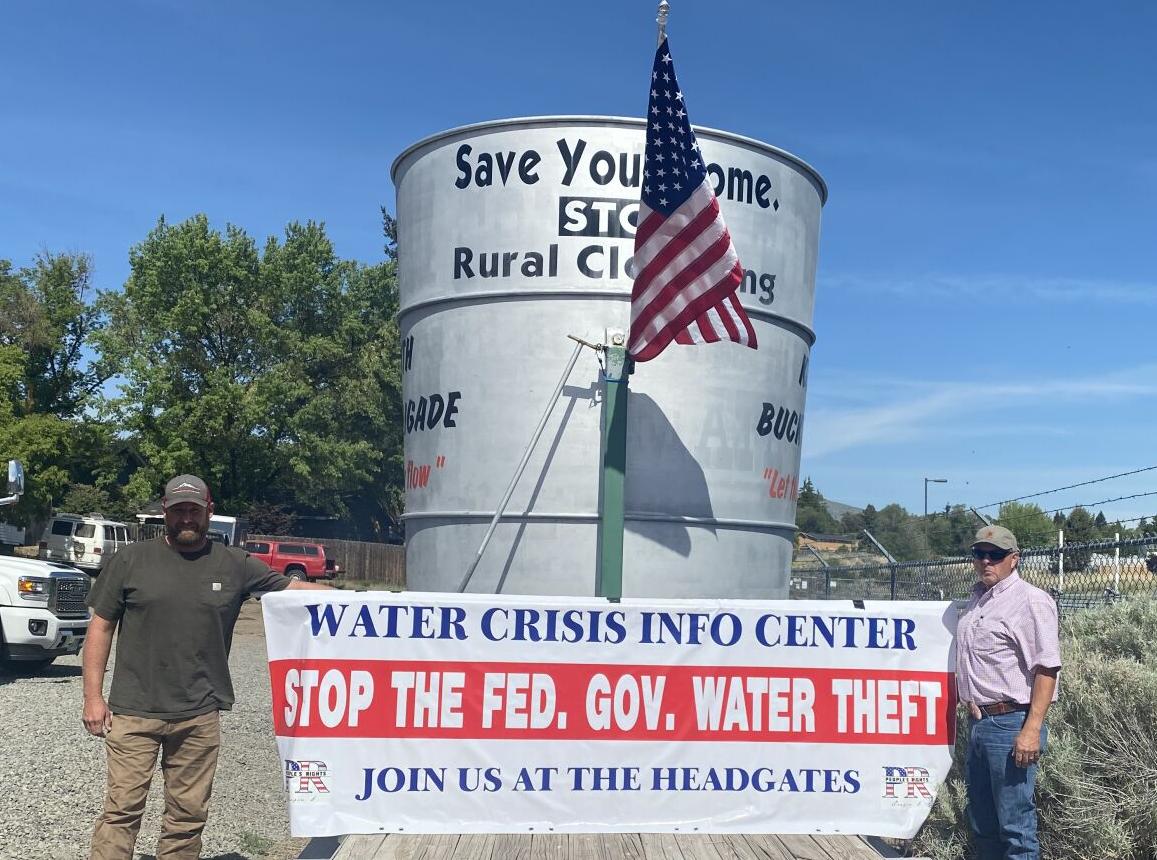 Grant Knoll, left, and Dan Nielsen. The two Klamath Project irrigators say they will breach the project’s headgates in an attempt to get water into the system’s main canal. 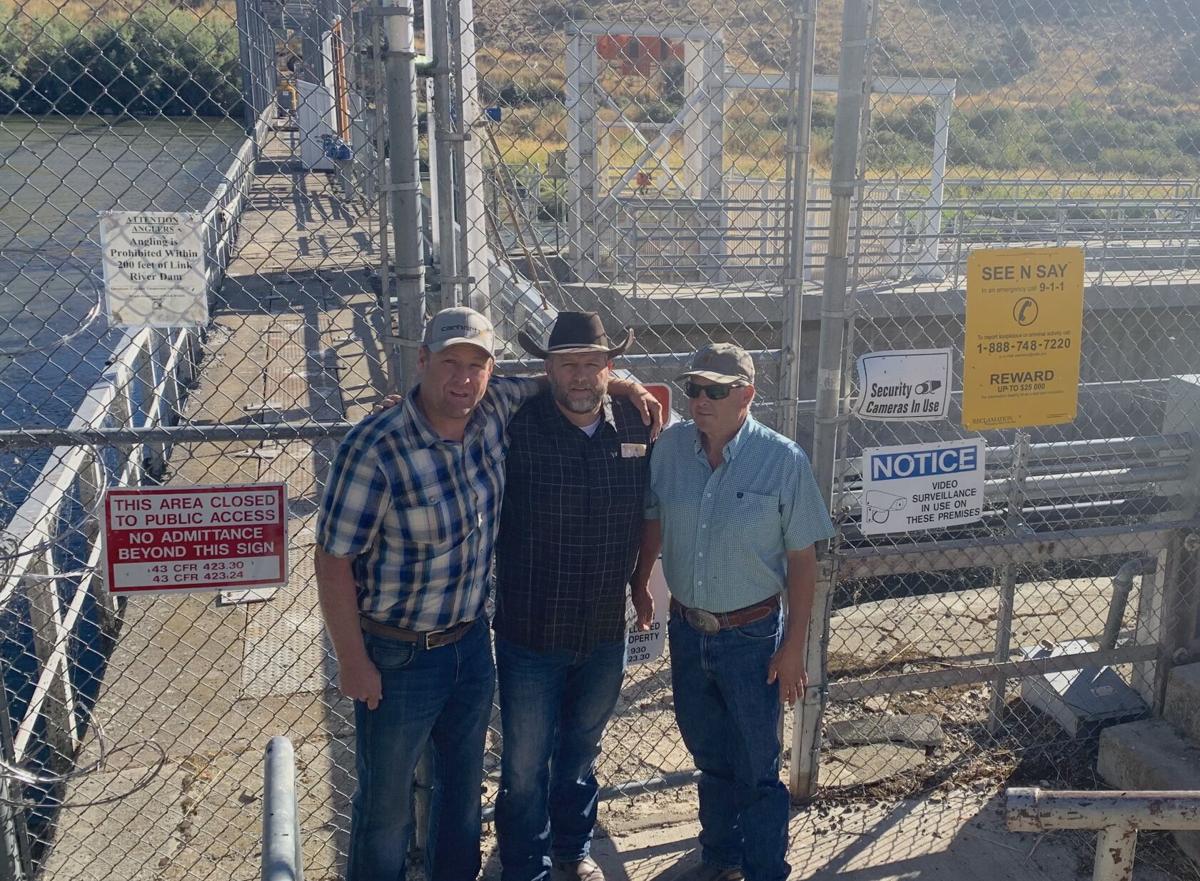 Grant Knoll, left, Ammon Bundy, center, Dan Nielsen, right, pose near the headgates of the A canal during a previous visit by Bundy to Klamath Falls.

Grant Knoll, left, and Dan Nielsen. The two Klamath Project irrigators say they will breach the project’s headgates in an attempt to get water into the system’s main canal.

Grant Knoll, left, Ammon Bundy, center, Dan Nielsen, right, pose near the headgates of the A canal during a previous visit by Bundy to Klamath Falls.

Rising tensions in the Klamath Basin could soon come to a boil, as two Klamath Project irrigators announced last week that they plan to lead the breach of the headgates of the federal irrigation project’s main canal and try to release water, likely triggering a standoff with the federal government.

Klamath Project irrigators Grant Knoll and Dan Nielsen bought property next to the headgates in April for $30,000 and have set up camp on the site. They are staffing a red-and-white canvas tent with volunteers from the local branch of People’s Rights, a national organization formed in 2020 by property rights activist Ammon Bundy, and they’re trying to rally support.

Both met in 2001 during a similarly extreme drought, and were among those who forcibly turned on the water to the A Canal at the headgates.

They say they’re planning to do it again, but just need bigger equipment this time around.

“I’m planning on getting D.C.’s attention,” Knoll said following a Memorial Day barbecue held at the tent. “We’re going to turn on the water and have a standoff.”

Federal officials announced in mid-May that, due to extremely low water elevations in Upper Klamath Lake, that no water would be released this season from the lake into the A Canal, the main channel that delivers irrigation water to the Project.

Knoll and Nielsen say they plan to enter the fenced area surrounding the headgates, which is topped with barbed wire and posted with keep-out signs threatening criminal charges.

The large tent where they’ve been rallying supporters and hosting speakers, along Nevada Street, has served as a “water crisis info center” for the past two weeks.

Every Thursday, organizers host speakers to talk about parts of the U.S. Constitution.

Recently, BJ Soper, a statewide People’s Rights leader who aided locals in starting their chapter earlier this year, spoke to a group of between 80 and 100 people at the red-and-white tent. He called on the attendees, some unfamiliar with the nuances of the Klamath Project, to stand up for their rights. Among them was the Klamath County Sheriff Chris Kaber.

“Sheriff, we’re in your hands,” a rally attendee told him on Thursday. “We need your help. Are you with us?”

Kaber said he didn’t attend the rally to speak but because he had personal friends among the group gathered there.

“I won’t take personal credit for it but the reason there aren’t federal agents out there guarding this right now is because of a lot of communication that’s going on,” Kaber said. “I speak to Danny and Grant often … and I have a lot of conversations with the Feds.

“They’re not here because we’ve convinced them that this is a peaceful community, that we’re going to work through this however we need to work through it,” Kaber added. “I see my job mainly as keeping the peace and in order to do that, I need to appear somewhat neutral maybe at times.”

Local People’s Rights Oregon volunteers tried to recruit more supporters throughout the holiday weekend at the Memorial Day parade on Monday. Volunteers walked behind a large bucket, hoisted up on a trailer bed, known widely for its role in the Bucket Brigade, a public demonstration protesting the 2001 water shutoff that drew at least 18,000 people to downtown Klamath Falls.

After the parade on Monday, volunteers hosted a barbecue at the red-and-white tent. They talked about their plans for a standoff after most of those gathered had left.

Nielsen and Knoll were frank in discussing their plans with Jefferson Public Radio. They said they were both prepared to do what it takes to get access to water they believe belongs to them.

“If you stand up for your private property, it appears that you’re putting your life on the line, ‘cause they will shoot you down and gun you down like they did LaVoy Finnicum,” Nielsen said.

Finnicum was a prominent participant in the armed takeover and occupation of the Malheur National Wildlife Refuge in Harney County, Ore., in 2016. Oregon State Police killed Finnicum after he tried to run an FBI roadblock during an attempted arrest.

Nielsen says when he and the others break into the headgates, “(We’re) not going to be armed but they’re probably going to be people on the outside protecting us, and if it’s not our sheriff, we’ll have people protect us.”

Ammon Bundy, leader of the 2016 Malheur occupation, has stated he’s willing to come to Klamath Falls to join those involved in the effort, if asked to do so.

Nielsen is quick to showcase a text conversation he has with Bundy, and Nielsen says Bundy will get the heads-up when they make their move. Knoll and Nielsen won’t say when that will be, but they are saying it’ll be on short notice.

Knoll had told a pool of reporters at a rally that having Klamath Irrigation District turn on the water would be the ideal approach. Knoll is a board member of the district and said he has swayed one of his fellow board members to vote to let the water flow.

“It would be much better for the community for KID to do it than for civil disobedience,” Knoll said.

But the odds of the KID board taking that approach appear to be slim.

The federal government owns the land underneath and surrounding the headgates, says Gene Souza, who manages the Klamath Irrigation District. The district has a contract with the federal Bureau of Reclamation to operate and maintain the facility.

Souza could sense things were going to get bad for water delivery this year starting last fall. In February and March this year, inflows into Upper Klamath Lake were the lowest since 1933. He says he understands the frustration that’s driving Knoll and Nielsen’s efforts.

“The individuals down by the “A” canal are … very passionate, and they’re angry and they’re frustrated and I can’t blame them for their feelings,” Souza said on Tuesday.

But, Souza says he doesn’t support any effort to breach the fence surrounding the headgates to access the water.

“At this point, the only thing that would do for our community is harm the cause, harm our strategy, and increase costs for farmers across the Basin,” Souza said.

“The sad part about it is, their actions, physical actions … would not result in a single drop of water being delivered to their farm.”

Reclamation has put five bulkheads — essentially massive steel gates — in place, cabled together with a lock, so that water can’t flow down the A Canal, and to the thousands of acres of farmland in the Basin.

“Anybody removing that cable lock will be in violation of trespass and criminal and civil penalties,” Souza said. “Those steel gates are only to be removed using specialized equipment.

“The KID employees who have access to the actual headgates have no ability to release any water into the system right now because those bulkheads are installed.”

Grant Knoll said the crux of the matter is a disagreement between how state water law and federal regulations are interpreted, and he and Nielsen don’t feel they’re getting a speedy solution.

“We think that the state right is supreme in deciding how the water gets distributed,’” Knoll said.

And legal efforts to get that belief validated in court have come up short.

”Your merits of what you’re trying to argue never get heard,” Knoll said. “So the frustration is building because we want to use the legal system and if the legal system’s failing you, what’s next?”

Klamath Water Users Association has repeatedly stated that while understanding of the right to protest, they are not supportive of this encampment at the headgates.

Ben DuVal, president of KWUA, released a statement this week stating he appreciates their enthusiasm but implored them to remain peaceful.

“There’s nothing to gain through violence or property destruction and it would poorly reflect on our community,” DuVal said. “I’ve always been proud of the community I live in. It’s full of good people who act respectfully and dignified despite different approaches on how to deal with the hardships being unfairly imposed on our livelihoods.”

DuVal said agricultural producers are managing a crisis this year and trying to survive.

“We don’t have time for outside activists that jeopardize our opportunity to work for longterm solutions. It imperials our relationships we have with other stakeholders who also want to be able to work for beneficial and cooperative solutions. The presence of Ammon Bundy and his proposed criminal activity would be a stain on our communities reputation and the respectable people who live here.”

U.S. Rep. Cliff Bentz, who visited with the Klamath Cattleman’s Association and local farmers in Klamath Falls on Thursday, reiterated that he is trying to round up millions in federal funding to get irrigators by this summer.

“There’s been some people who have said, ‘Well, if it’s our water we should take matters into our own hands and take it.’ And I would counsel against that for two reasons,” Bentz said during the question-and-answer session.

“They could go to jail and two, it’s going to hurt my ability to get money for the Basin.”

But he emphasized that those participating in protests at the tent near the headgates could harm the greater cause of securing federal relief funds.

The local People’s Rights branch was formed for a broader purpose, according to participants and organizers. The group, largely comprised of those unaware of Klamath Project operations, began to address restrictions put in place during the COVID-19 pandemic. The cause has since expanded to include fighting for water rights in the Klamath Basin.

“ I didn’t even know Ammon Bundy had started it when I started … and I think he’s a hero,” said Kristen Clark, one of the local area assistants for People’s Rights in Klamath Falls.