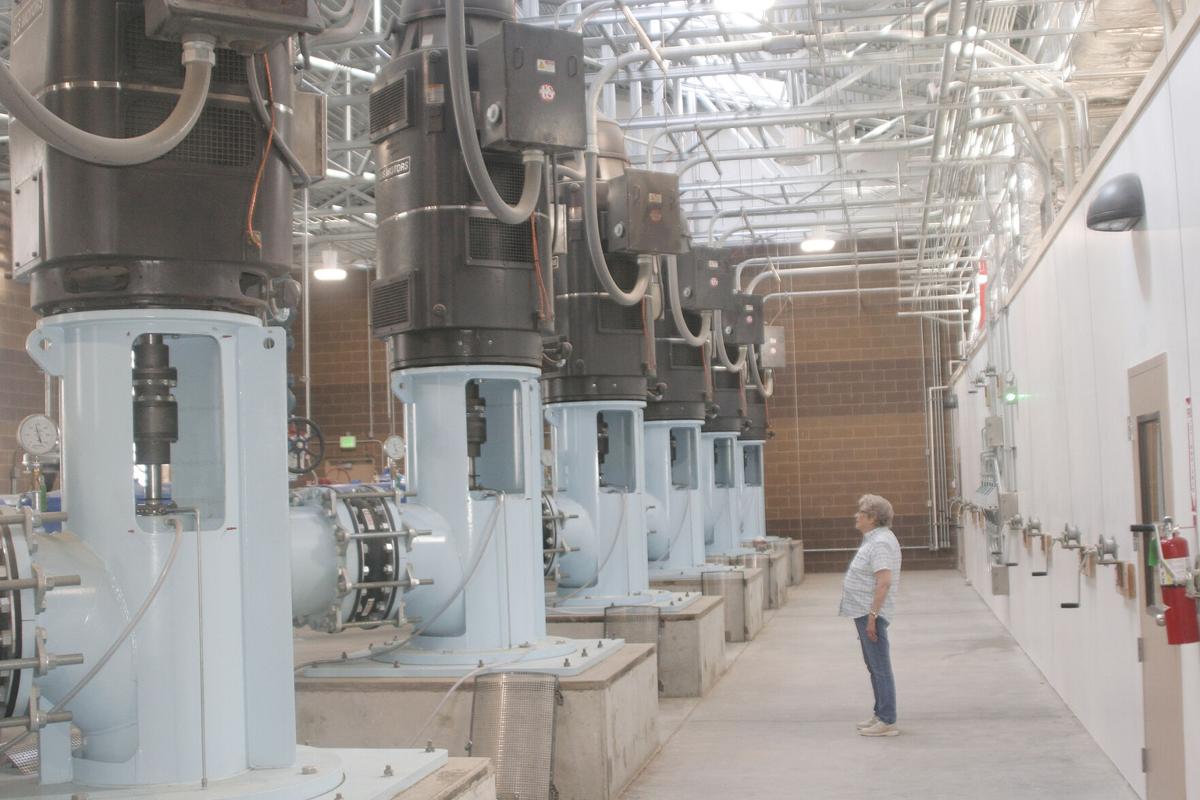 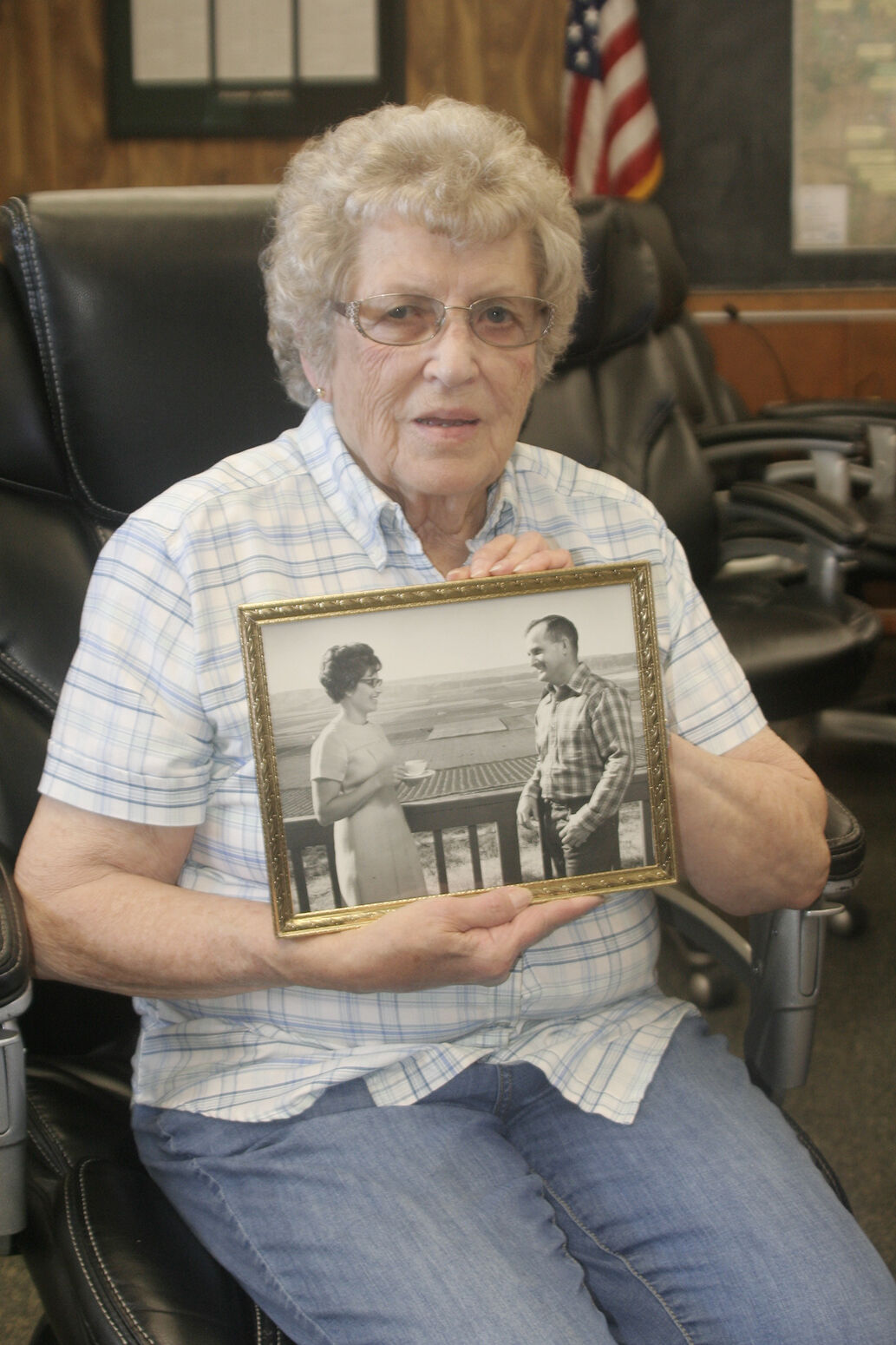 Alice Parker holds a family photo of herself with her husband, Ike, on their porch in Royal City in 1968. 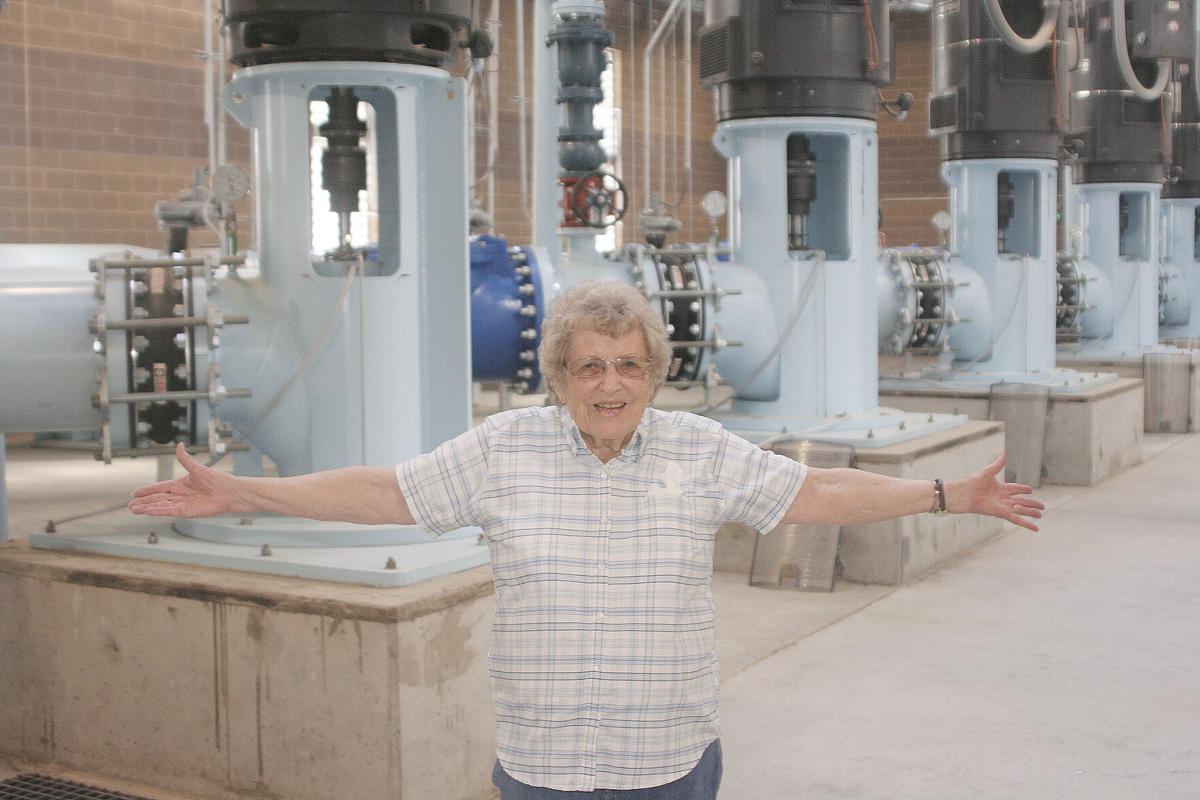 Alice Parker in the EL47.5 pumping plant outside Warden, Wash. She is a longtime advocate of delivering more Columbia Basin Project water to farmers in the Odessa area. The station represents the first new large-scale irrigation district delivery system in almost 50 years. 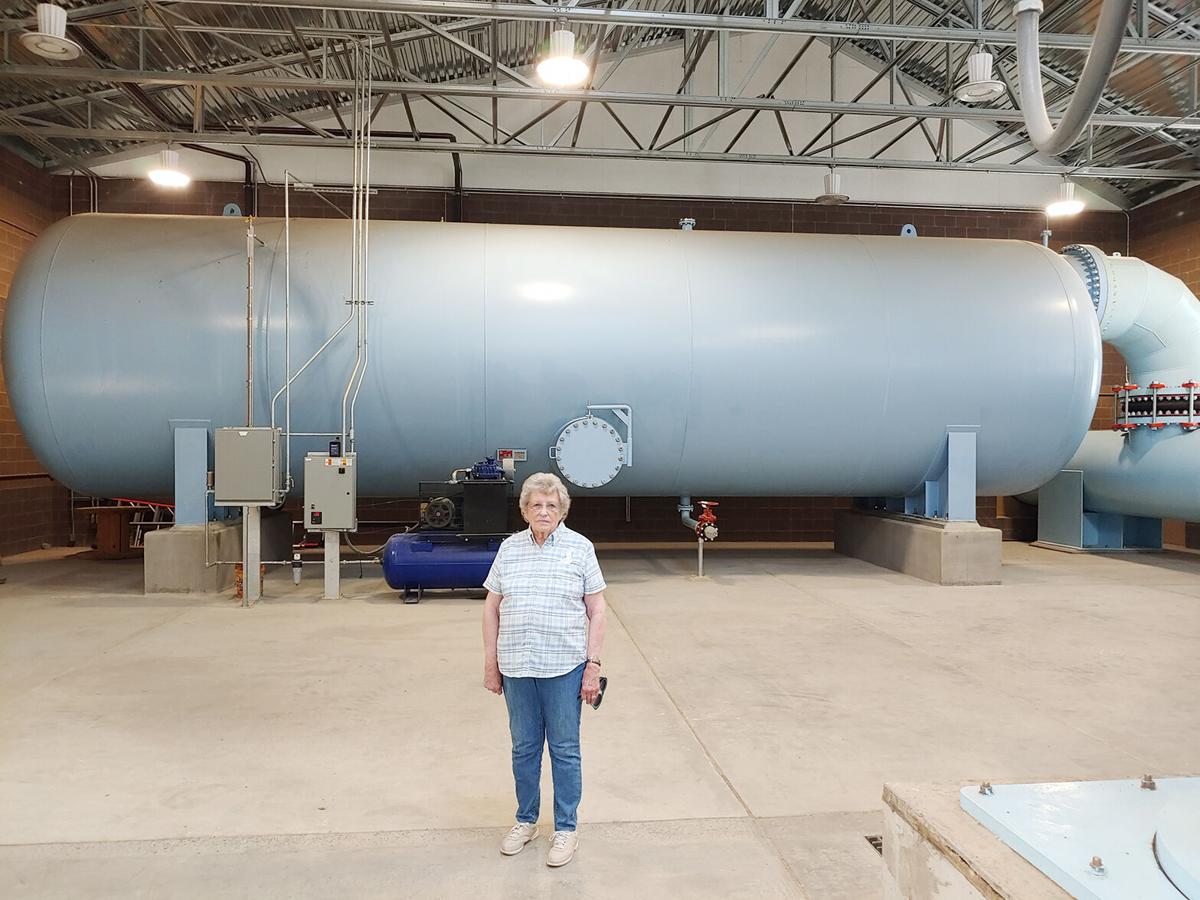 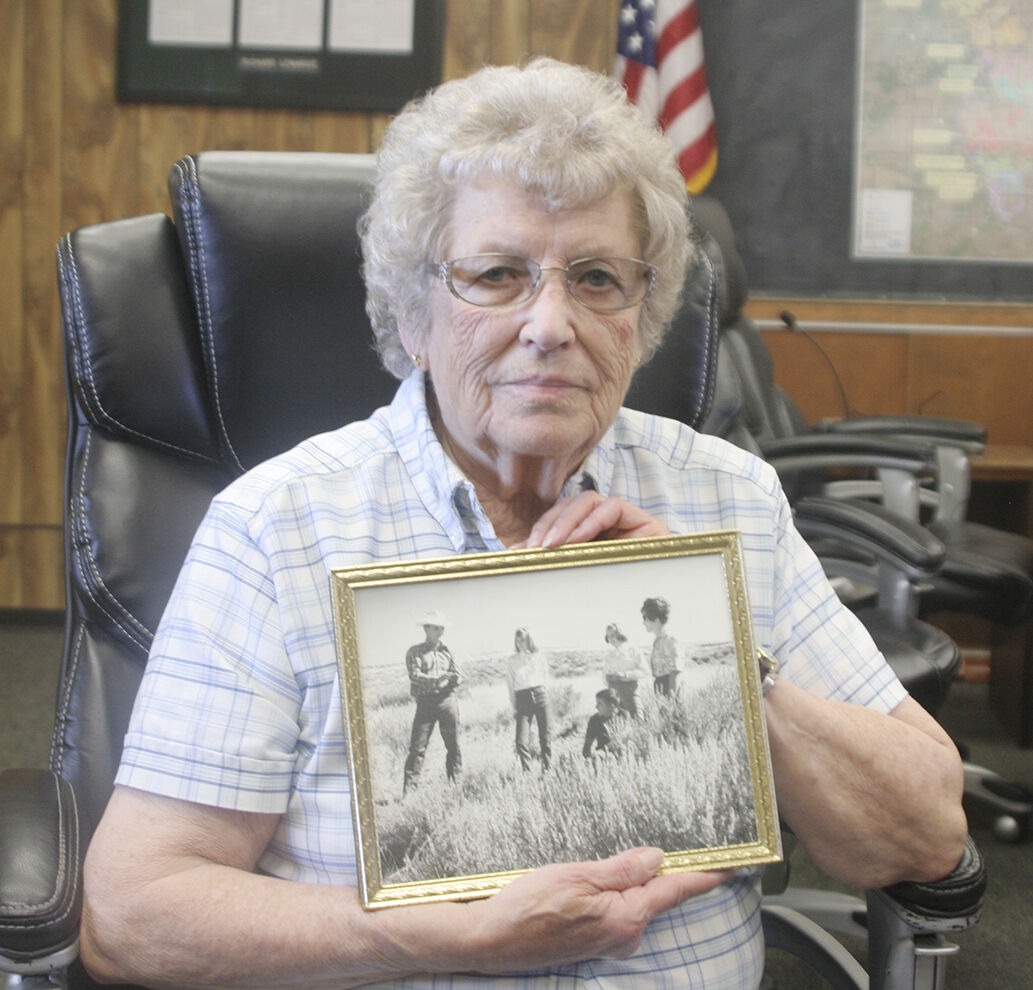 Alice Parker holds a family photo of herself, right, with husband Ike and their three children in 1968. 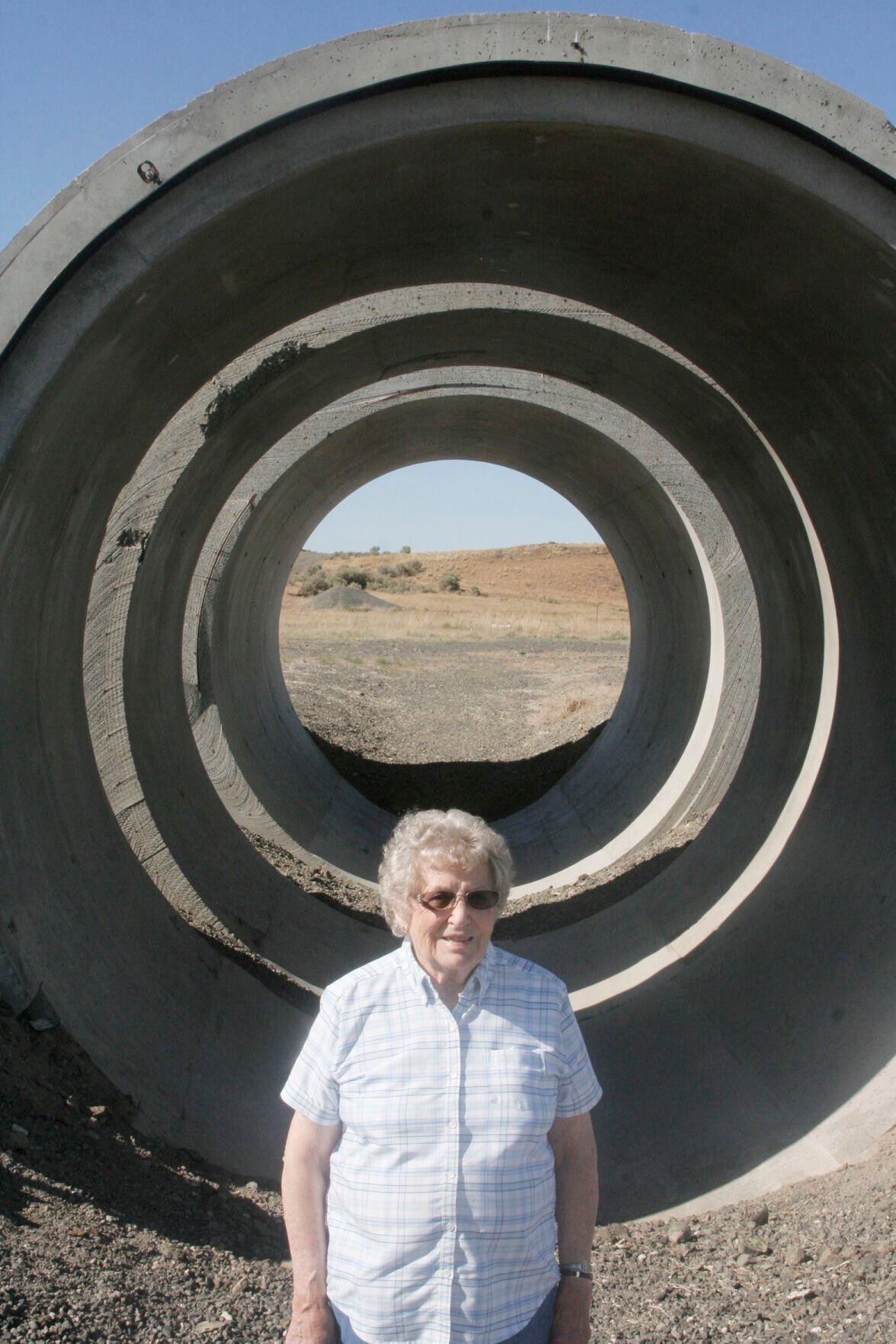 Alice Parker in front of irrigation pipe like that used in work on the East Low Canal outside Warden, Wash. 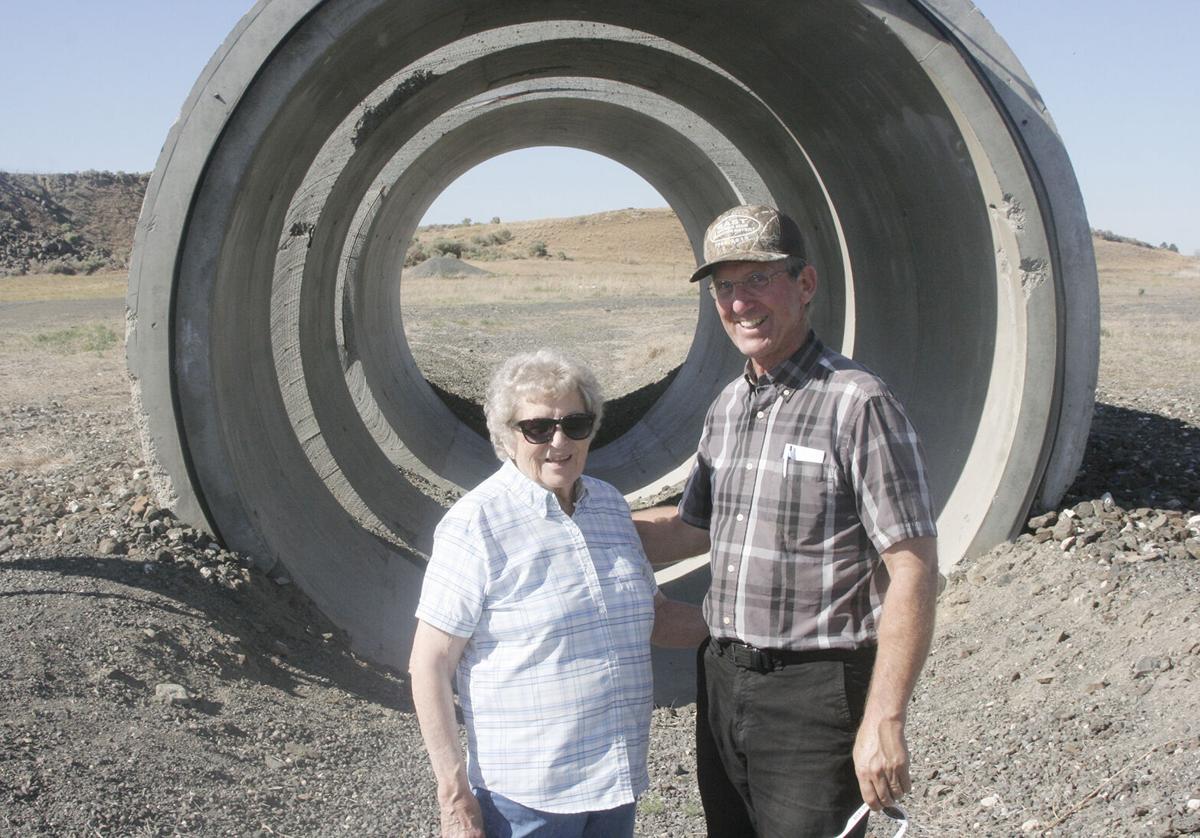 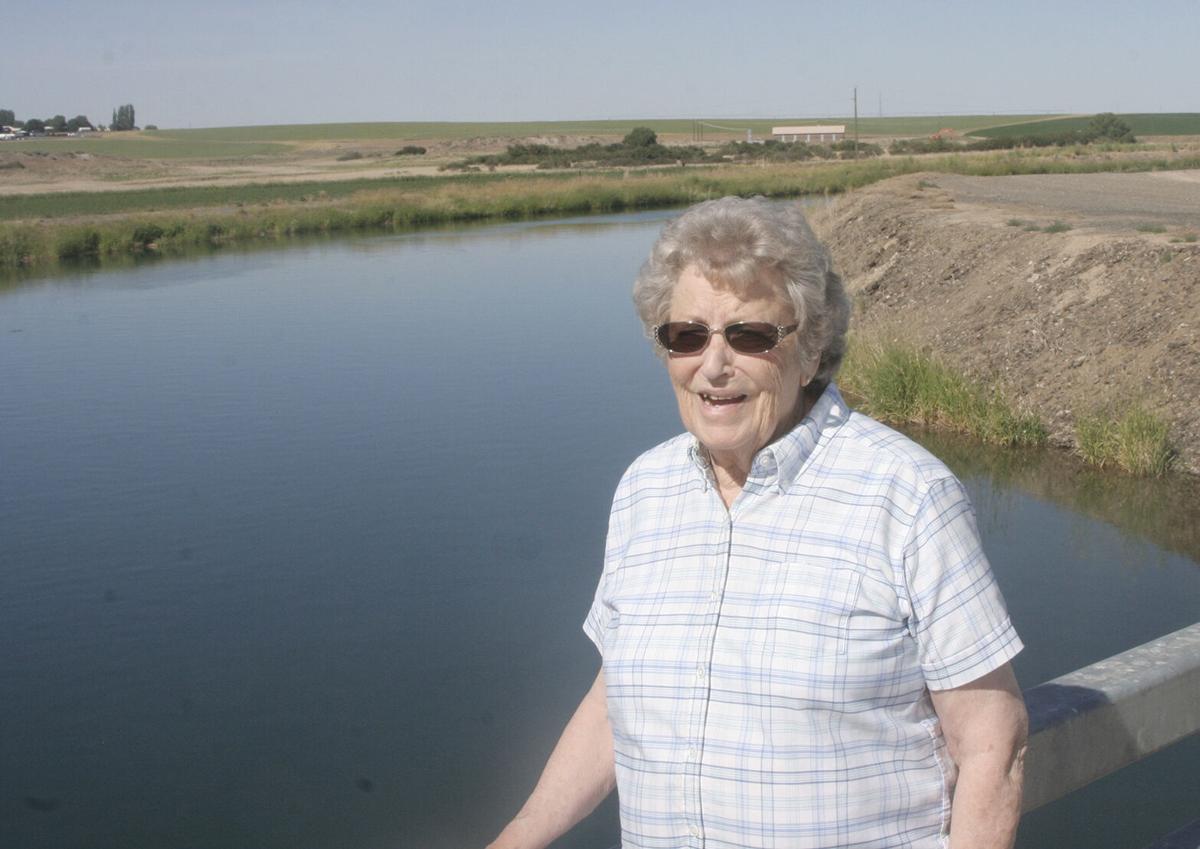 Alice Parker on a bridge over the East Low Canal, which conveys Columbia River water to farmers near Warden, Wash. The new EL47.5 pumping station is in the background. 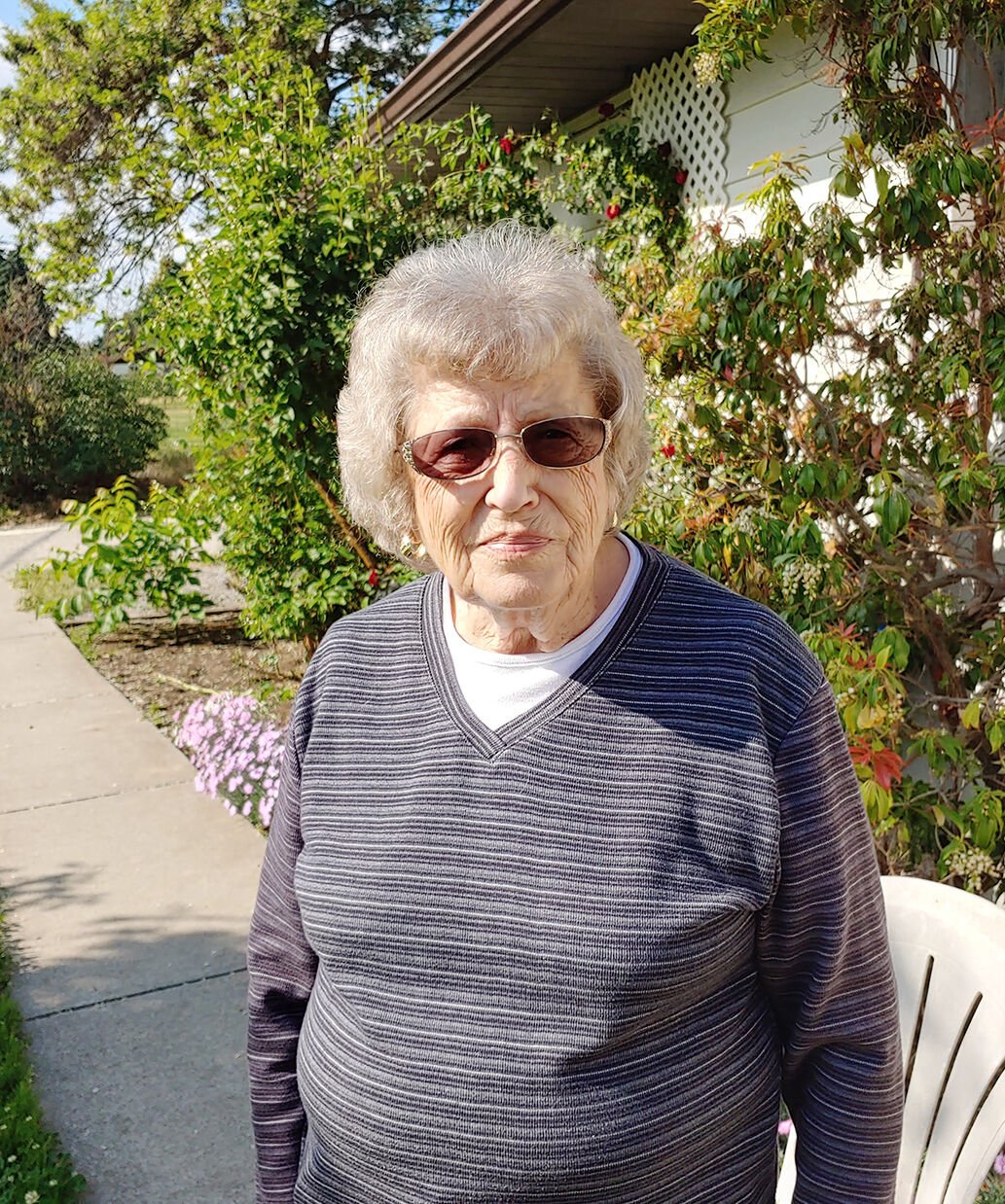 Alice Parker outside her granddaughter’s house in Spokane.

Alice Parker holds a family photo of herself with her husband, Ike, on their porch in Royal City in 1968.

Alice Parker in the EL47.5 pumping plant outside Warden, Wash. She is a longtime advocate of delivering more Columbia Basin Project water to farmers in the Odessa area. The station represents the first new large-scale irrigation district delivery system in almost 50 years.

Alice Parker holds a family photo of herself, right, with husband Ike and their three children in 1968.

Alice Parker in front of irrigation pipe like that used in work on the East Low Canal outside Warden, Wash.

Alice Parker on a bridge over the East Low Canal, which conveys Columbia River water to farmers near Warden, Wash. The new EL47.5 pumping station is in the background.

On a recent June afternoon, she finally saw her dream transformed into reality.

Parker toured the immense waterworks at the new EL 47.5 pump station near Warden, Wash. It’s a modern engineering marvel, pushing water through nearly 9 miles of pipeline from the East Low Canal to irrigate more than 8,500 acres of farmland to the east. The water comes from the Columbia River at the Grand Coulee Dam, over 60 miles away.

She’s how every grandmother should be, constantly ready with a hug and a hearty laugh or a bit of wisdom.

She’s also an example of a farmer’s patience. And persistence. Farmers and others say her efforts are the main reason the new pump station, which is critical for farmers in the region, exists.

For decades, area farmers relied on water from the aquifer below, until it got so low their wells became unreliable or ran dry. The only way they could raise high-value crops profitably in the region, which gets about 13 inches of rainfall a year, was replacing that well water with more plentiful Columbia River water.

But the problem was how to get the water from the river to the farms. Doing that would require both political and financial support.

That’s where Parker came in. She was at the center of those efforts, meeting with policy makers and state and federal lawmakers to cobble together support for building the massive network of pumps and pipes.

“I had so many people tell me back when I was working in those early days, ‘You’ll never live long enough to see any more water out there,’” she said. “They’re wrong. I’m still here.”

Parker and her husband, Ike, grew up 9 miles apart in Colorado dryland farm country. Farming was in their blood.

The couple married in 1952. Ike died in January 2002. They have three children, 10 grandchildren and 16 great-grandchildren.

They moved to Royal City, Wash., from Colorado in January 1965.

The Parkers’ farm was part of Block 81, the last irrigation block of the Columbia Basin Project to be developed on the Royal Slope.

Ike’s cousins had already bought several 80- to 200-acre farming or ranching units in Washington, and convinced the couple to make the move to farm full-time.

The soil was so light when they arrived that it could have easily blown away, Parker said.

“Those first three years, we farmed to get that ground tied down, not to make money,” she said.

The Parkers put in their first irrigation system in 1975. Before that, they relied on siphon tubes, wheel lines and corrugated hills dug into the soil.

“Oh, man, if we would have had center pivots back when we first started, it would have been a godsend,” Parker said.

When Congress authorized the Columbia Basin Project in 1943, it was designed to deliver water to 1.03 million acres of farmland. Only about 671,000 acres ever received water, about 65% of the total.

In 1964, the Columbia Basin Development League — a group of the region’s business and agricultural leaders — was formed to push for completion of the project.

“They said (it would take) 75 years. I was in hopes we could get it quicker than that,” Parker said.

In the meantime, in the mid-1970s, the Washington Department of Ecology allowed farmers in the Odessa Subarea to drill irrigation wells to provide water temporarily until another major portion of the project, the East High Canal, could be built.

But that canal, with a price tag of more than $1 billion, was never built.

Instead, the groundwater pumping continued, and today those wells are running dry.

The first big addition to the system in nearly 50 years is now operating. The East Columbia Basin Irrigation District’s $20.8 million EL 47.5 station supplies enough Columbia River water to irrigate 8,521 acres that previously depended on deep-well pumping. It began operation last spring and has the capacity to serve 10,500 acres of farmland.

Another development, in the Wahluke Slope near Mattawa, was completed the 1970s, said Jed Crowther, development coordinator of the irrigation district.

She recalled a farewell party when she and Ike left Colorado.

“This one guy, he was an old German guy, he said, ‘Ah, I give you six months and you’ll be back,’” she remembered. “And I thought, ‘OK, gotta prove him wrong.’”

In Parker, Development League executive director Chan Bailey found an ally and an effective proponent of the project. He often asked her to testify at legislative hearings in Olympia, partly because she farmed and partly because of her connections to Women Involved in Farm Economics (WIFE).

As WIFE’s national president in 1988-1989, Parker also made numerous trips to Washington, D.C., speaking on behalf of farmers with members of Congress.

She said her husband, Ike, and her parents were prime examples of farmer advocacy.

“They instilled in me that your surroundings are only as good as you yourself try to help make it be,’’ she said. “Ike was a great supporter and a great pusher. He kept pushing me, making sure I was free to go and do those kinds of things.”

When Bailey retired as the league’s executive director in 1992, the board asked Parker to step in. The organization installed a second phone line so she could work at home.

She retired in 2012, but remains active in the league.

Parker is on the league’s board of trustees and executive committee.

She hopes to step down from the executive committee during the next election, she said, but she’ll continue to work as long as someone is needed.

“When you get to be my age, it’s kind of time to start letting some of the younger people take over,” Parker said.

Parker’s many connections with farm organizations and legislators were vital, leaders say.

“She’s the cornerstone of the development league,” said Dale Pomeroy, a retired farmer and commissioner of the Port of Warden. “People went to her from everywhere, asking, ‘How are we going to fix this?’ It was a big puzzle, and she quietly sat there and had a lot of the pieces put together.”

The state and federal agencies involved have all gone through several leadership changes over the decades, Pomeroy said.

“What’s been handed down to them, a lot of it comes from Alice, indirectly as well as directly,” he said.

“She’s one of the nicest people, very genuine, passionate about her beliefs and what she wanted to accomplish,” Sandison said. “She was a tireless advocate for that, but you really enjoyed working with her. That’s a special set of skills, to be both the advocate and the good partner.”

Parker’s status as a lifelong farmer meant people knew she was a straight shooter and could be trusted, said Clark Kagele, an Odessa farmer and secretary of the league.

“Everybody knew Alice,” Kagele said. “You could walk into a room with Alice and the comfort came quicker, immediately. You could sit down and have a real conversation.”

“Alice is an icon — for all of agriculture but certainly for water, irrigation and the Columbia Basin Project,” said Vicky Scharlau, the league’s current executive director. “Her voice continues to be one of the most important and meaningful for the league and for our work. She should be nominated for the State Medal of Merit,” an annual award the governor presents to exceptional Washingtonians.

From her home atop the Frenchman Hills, Parker can look out across the Royal Slope “and see what everybody’s doing.”

“Which is really enjoyable to me, to see all the new things, new ideas and new ways of farming ... that the farmers are coming up with,” she said.

The benefits of the new pump station in Warden extend beyond the farmers receiving water all the way to the people who will eat the food that those farmers grow, Parker said as she walked around the f acility.

“It just amazes me what people can do and what they have done,” she said. “The entire Columbia Basin Project from the get-go, from Grand Coulee all the way down. It’s just beyond comprehension.”

She paused for a moment.

“It really pleases me to see this all happening, under my watch,” she said with a laugh. “I didn’t get it started but I worked on it.”

Heisel takes over as president of malting barley association