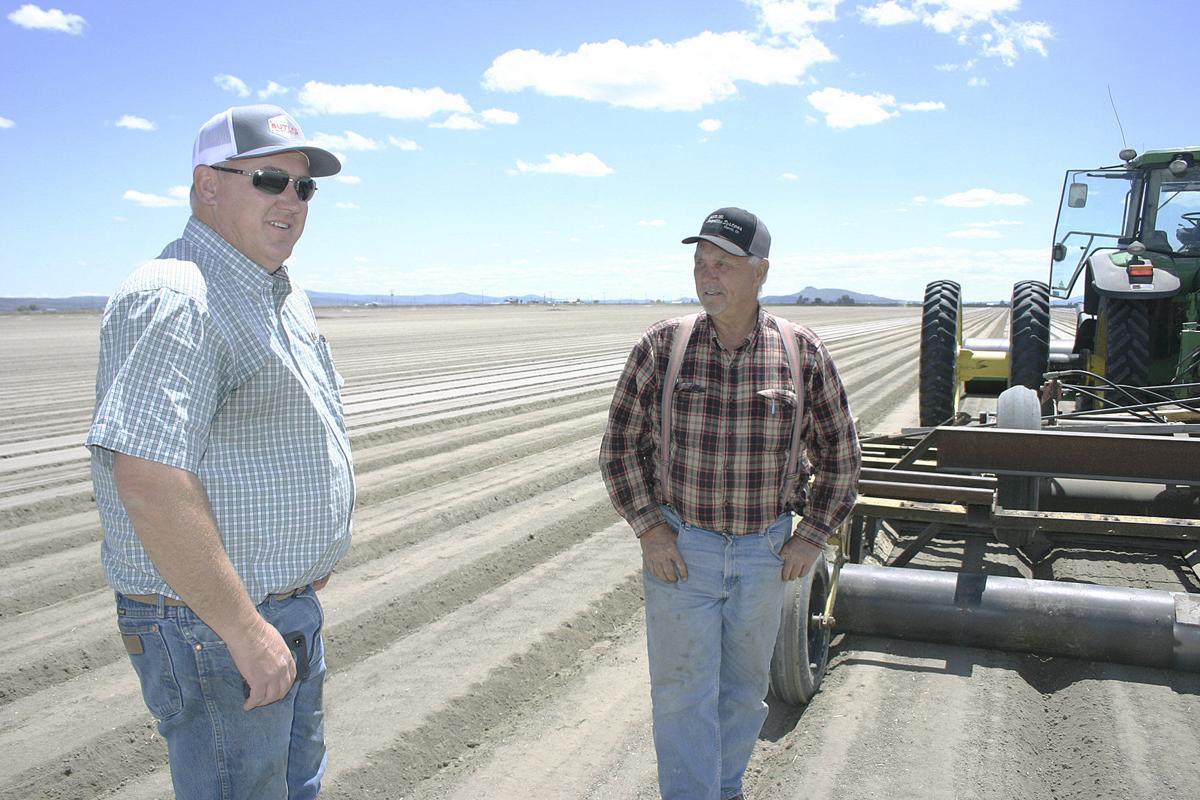 Scott Seus, left, owner of Seus Family Farms in Tulelake, Calif., speaks with his father, Monte Seus, during planting of onion fields. Scott Seus is among the organizers of Friday's "Shut Down and Fed Up" rally, which starts at 10 a.m. in Merrill, Ore. 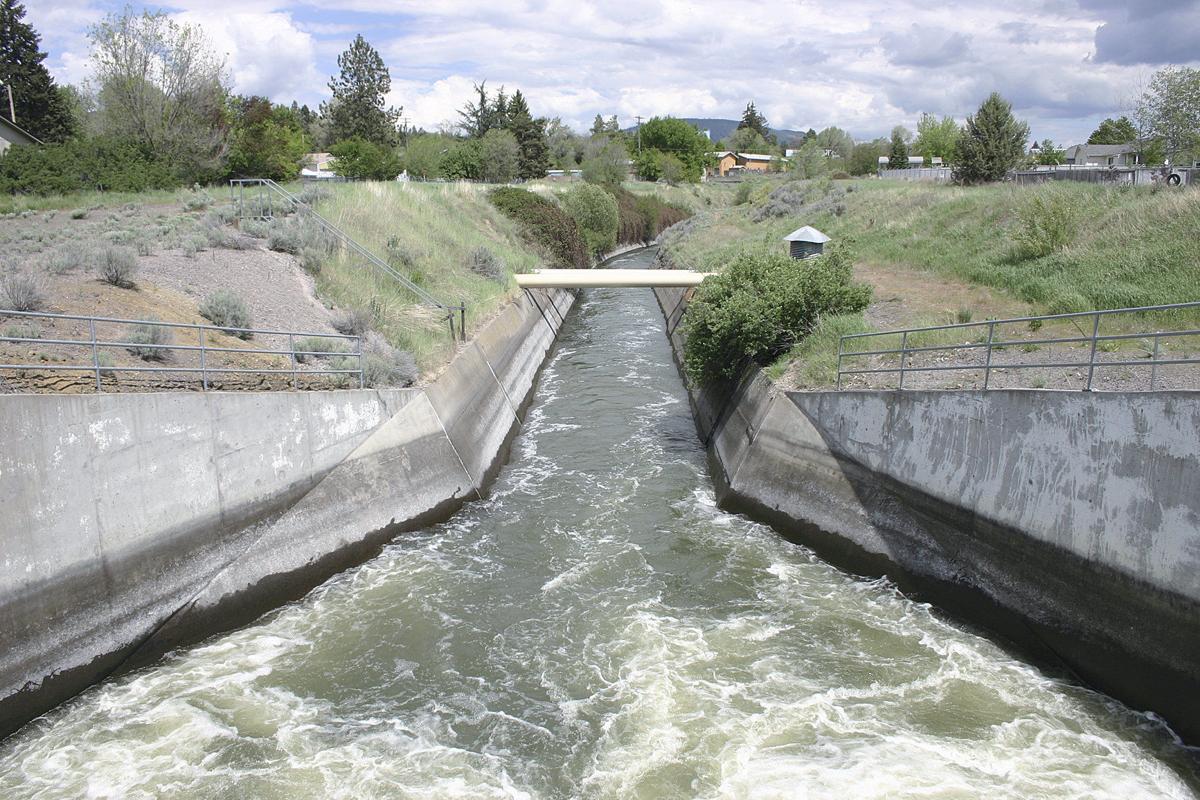 Scott Seus, left, owner of Seus Family Farms in Tulelake, Calif., speaks with his father, Monte Seus, during planting of onion fields. Scott Seus is among the organizers of Friday's "Shut Down and Fed Up" rally, which starts at 10 a.m. in Merrill, Ore.

Seus began planting onions, peppermint and spearmint last month. At the time, he expected the U.S. Bureau of Reclamation would provide about 140,000 acre-feet of water to the Klamath Project, serving 230,000 acres of farmland including the Tulelake Irrigation District.

Though it was far from a full water supply, Seus said growers at least knew what to expect and could plan for the upcoming season. Or so they thought.

Soon afterward, Seus said the goalposts suddenly changed. A combination of drought and more water for endangered fish meant farms would be getting less, leaving some fields dry with millions of dollars worth of crops already in the ground.

Water shutoffs have happened before in the basin — in 2001, water was cut off in April leading to a bucket brigade in protest. That year was bad, Seus said, but this year might be even worse considering farms have already invested in their crop.

“This year, it just put everybody in a terrible position,” Seus said. “Nobody is going to come out of this thing (ahead).”

The situation is the latest chapter in an ongoing water crisis plaguing the Klamath Basin in Southern Oregon and Northern California. Now farmers are planning a rally and tractor convoy May 29 to raise awareness and call upon the government to fix what they describe as decades of mismanagement.

The planned two-hour convoy will start at 10 a.m., winding through the Klamath Project area and back down Main Street in Klamath Falls before ending at a farmer’s field in nearby Midland, Ore.

Bob Gasser, one of the event organizers, said they are hoping for 1,000 vehicles to participate.

“Anybody who has a business, we’re getting them involved, too,” said Gasser, co-owner of Basin Fertilizer in Merrill, Ore. “This shutdown doesn’t just affect farms.”

Farming in Klamath, Siskiyou and Modoc counties in Oregon and California contributes more than $1.3 billion in total economic impact, according to the latest USDA Census of Agriculture and county crop reports. Gasser said the region’s agricultural base supports other local businesses, schools and community groups.

The Klamath Project was built in the early 1900s to deliver irrigation water to those farms and ranches. It also provides water to the Lower Klamath and Tule Lake national wildlife refuges, part of the Pacific Flyway for migrating birds.

In 1988, both shortnose and Lost River suckers in Upper Klamath Lake were listed as endangered. The fish are a culturally significant food for the Klamath Tribes. Coho salmon are also listed as threatened under the Endangered Species Act in the lower Klamath River, creating a tug of war between farms and fish that all rely on the same water resources.

Gasser said farms in the Klamath Project are caught in the middle as federal agencies decide more water is needed to increase lake levels and river flows.

“With the ESA and some of these agencies, they’re just out of control,” he said. “That’s been our problem. For 20 years, it’s been getting worse.”

The Bureau of Reclamation recently issued a three-year interim operating plan, which takes into account renewed ESA consultation with the U.S. Fish and Wildlife Service and National Marine Fisheries Service. The bureau anticipated 140,000 acre-feet to the Klamath Project this summer, less than half of last year’s 325,000-acre-foot allocation.

But even that may be reduced as drought conditions worsen in the basin. The Klamath Water Users Association, which represents 1,200 family farms and ranches in the Klamath Project, announced May 8 that there was a “very significant risk” of drastic water reductions, but no formal decisions had been made.

Farmers such as Seus risk losing everything without enough water for irrigation. Seus Family Farms grows about 4,000 acres of onions, mint, horseradish and cereal grains.

Seus said he will supplement as much as he can from groundwater wells. Many of the farm’s crops are under contract for processing, adding another layer of stress.

“You’re trying to be a reliable supplier to to the people who are issuing contracts to you,” he said. “When you falter on one of those and you can’t deliver what you say you’re going to deliver, that’s a situation no grower ever wants to be in and no processor ever wants to accept.”