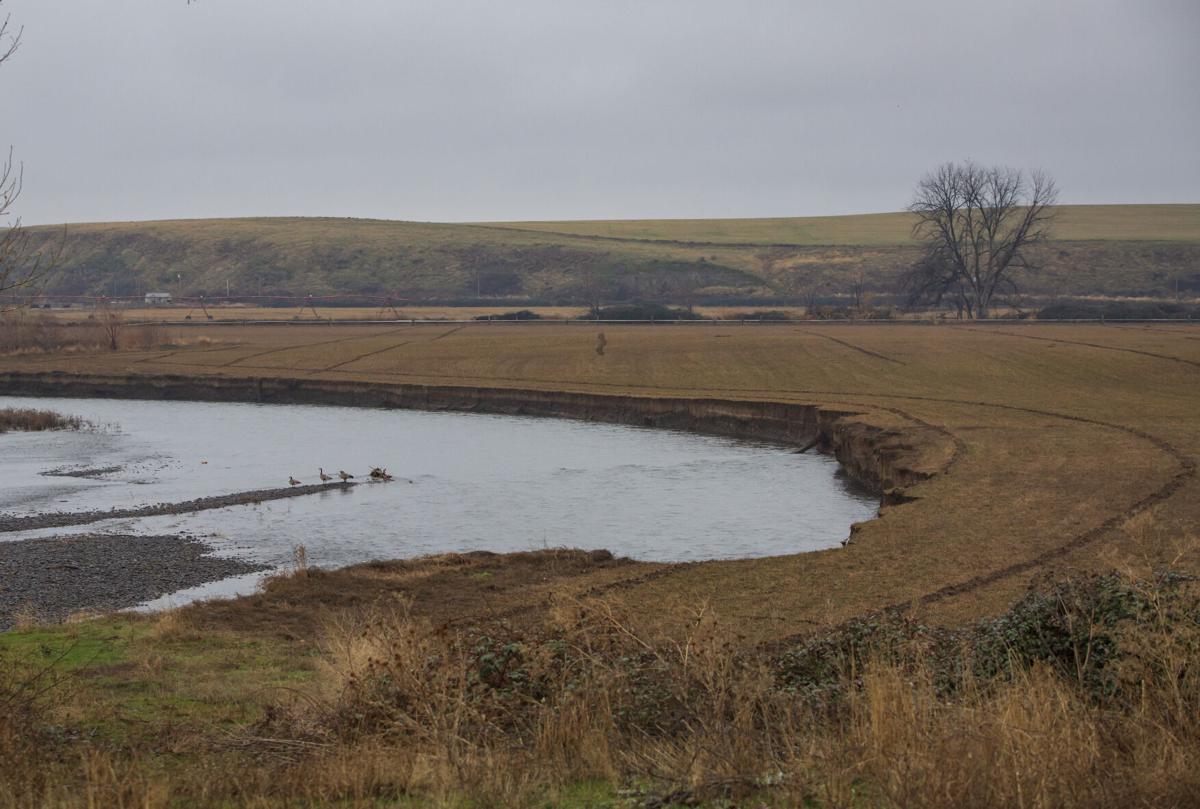 Echo, Ore., residents are worried about how the shifting Umatilla River has washed away chunks of land and how it will affect the bridge leading out of the community, which is part of the state highway system that forms a loop connecting Highway 395 and Highway 207. 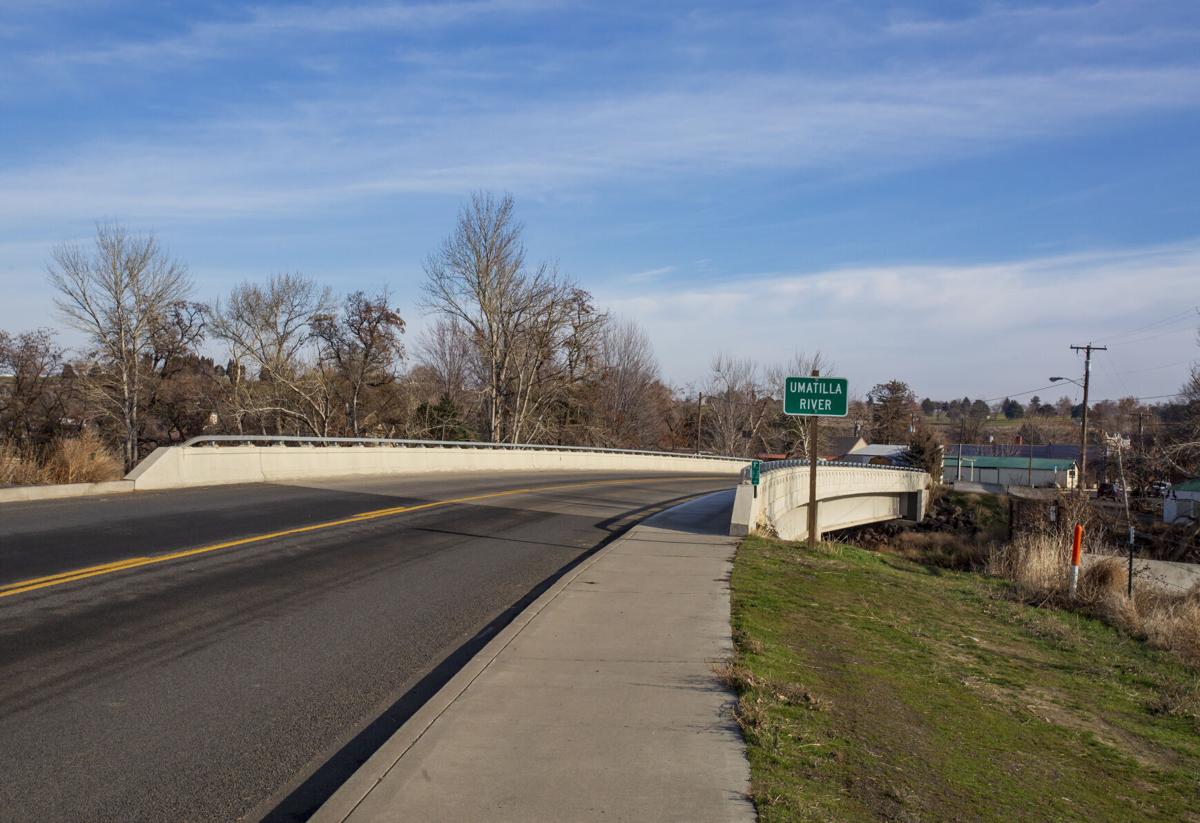 Echo, Ore., residents have expressed concern that the shifting Umatilla River will affect this bridge.

Echo, Ore., residents are worried about how the shifting Umatilla River has washed away chunks of land and how it will affect the bridge leading out of the community, which is part of the state highway system that forms a loop connecting Highway 395 and Highway 207.

Echo, Ore., residents have expressed concern that the shifting Umatilla River will affect this bridge.

ECHO, Ore. — The flood of February 2020 changed the course of the Umatilla River around Echo, but the river is not done moving.

The shifting landscape becomes obvious when looking out over fields owned by Bink Ramos, on the south side of the bridge where Main Street becomes Oregon Trail Road. There, freshly sheared-off banks in a large U-shape mark where chunks of what used to be an agricultural field have collapsed into the river and washed away.

Ramos estimates he has lost about 5 acres of property along the river in total, which he said would have been valued at between $6,000 and $8,000 per acre.

“Over the past two to three weeks it’s almost doubled the damage done in February,” he said.

Ramos’ concerns about the erosion stretch beyond the value of his property. The lost land brings the river closer to a small collection of homes just on the other side of the field, known as the Leezer subdivision. The neighborhood flooded during the 2020 floods.

Ramos and others in Echo are also worried about how the shifting river will affect the bridge leading out of Echo, which is part of the state highway system that forms a loop connecting Highway 395 and Highway 207.

Andrew Kilgore said he has reached out to the Oregon Department of Transportation and Army Corps of Engineers to urge them to take action to protect the bridge and road from the river, but was unsatisfied with their response.

“It’s heading closer to the highway,” he said.

Tom Strandberg, public information officer for ODOT’s Region 5, said the department sent someone to assess the bridge on Tuesday, Jan. 19, after receiving calls about it. He said there are no “immediate issues” with the bridge, which is protected by large rocks around it, but the department will be keeping an eye on the situation.

“We’ll continue to monitor our bridges and greatly appreciate those who have brought the high water and river channel changes to our attention,” he said in an email, adding that concerns specifically about the river channel should be directed to the Army Corps of Engineers.

For Ramos, the recent erosion of the property he bought in 2019, and the flood’s effects on more property he already owned upstream, have been frustrating. He joined the Mid-Umatilla River Coalition, which Echo-area residents formed in 2020 in order to work together on lobbying state legislators and agencies for the funding and permission to do projects along the river that they hope will reduce the impact of future flooding.

Ramos said agencies like the Army Corps of Engineers have mostly taken the position that rivers naturally change over time and the Umatilla River should be allowed to meander. But Ramos said he believes some parts of the river should be managed, or property owners at least compensated for their losses. He said he understands and supports the idea of avoiding man-made disturbances in the river that would harm fish and other wildlife, but said the amount of soil caving into the river now wouldn’t be good for fish either.

He said he feels like they’re making progress on working with the agencies, but funding is still a question mark.

“A major project on that stretch of the river could be six figures easily,” he said.

David Slaght, Echo’s city administrator, shares the frustrations and concerns of the city’s residents regarding the river. He said it seems certain the town will face more flooding in the future, but in some ways the city’s hands are tied. The Main Street bridge, for example, is ODOT’s jurisdiction, not the city’s.

Most of the projects that could help protect homes from flooding would also need to take place on private property, although Slaght said he has been working with the property owners in question and they seem open to cooperating if the proper permits and funding could be secured.

Beyond the Ramos property and bridge, he is also particularly concerned about a collection of homes on the south side of Echo that flooded last year and are vulnerable to flooding again.

He said the Mid-Umatilla River Coalition is making more progress than he expected on working with state agencies to get permission for flood protection projects.

“It’s just not happening as fast as the river is eating away (property),” he said.