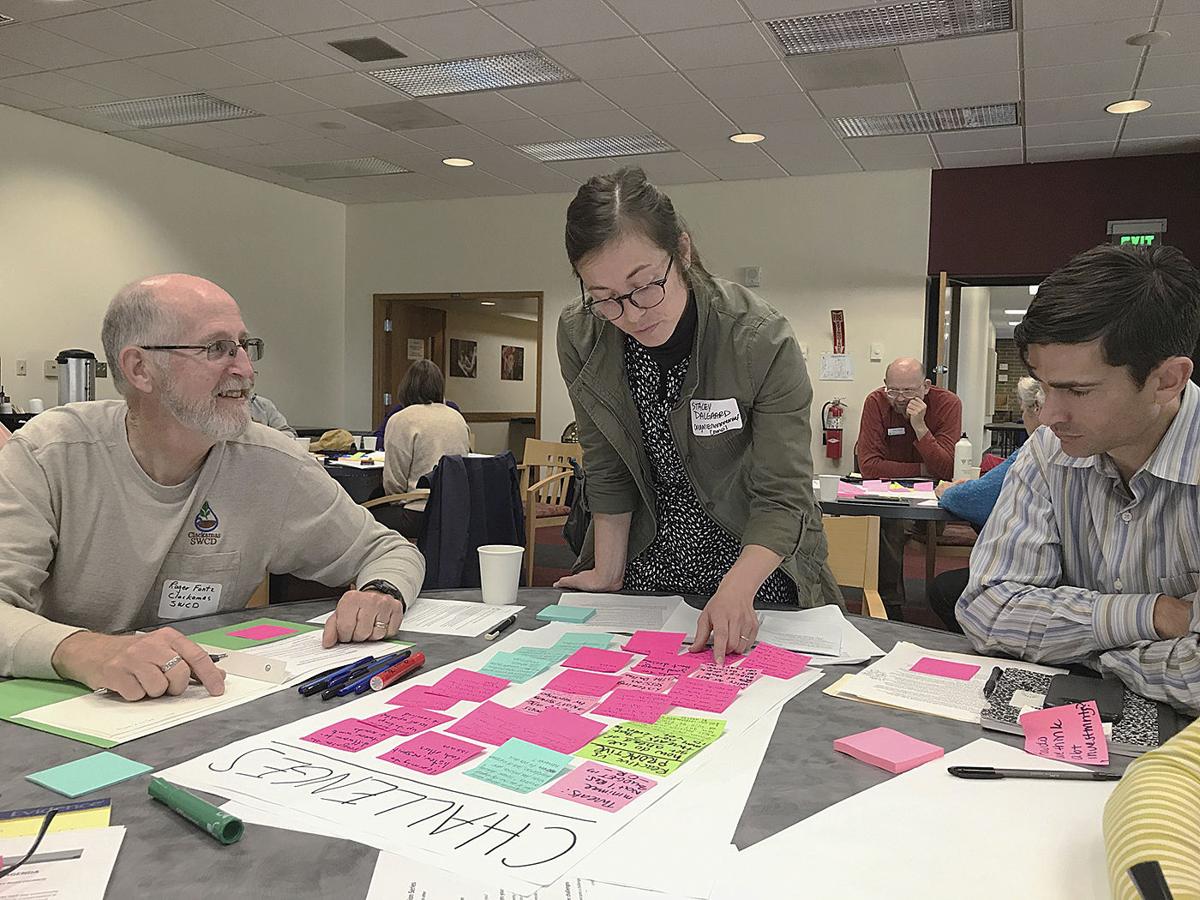 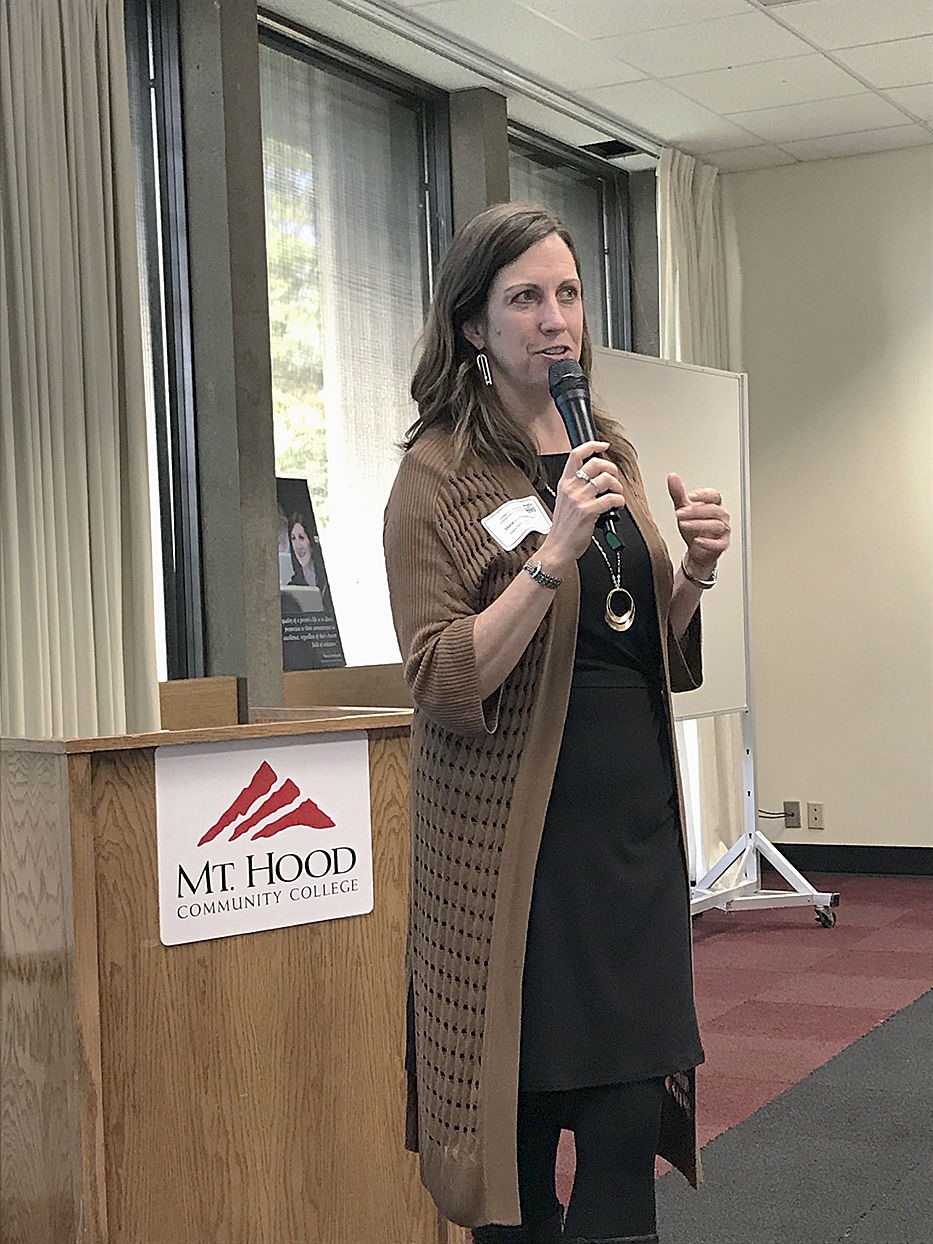 Meta Loftsgaarden, executive director of the Oregon Watershed Enhancement Board, is leading the state's 100-year water vision. She spoke during a community meeting Oct. 22 in Gresham.

Meta Loftsgaarden, executive director of the Oregon Watershed Enhancement Board, is leading the state's 100-year water vision. She spoke during a community meeting Oct. 22 in Gresham.

GRESHAM, Ore. — Faced with climate change, a growing population and aging infrastructure, the state of Oregon is reaching out to local communities for ideas to ensure clean and abundant water supplies over the next 100 years.

The Oregon Water Resources Commission has already adopted an Integrated Water Resources Strategy, which was last updated in 2017. It identifies 18 critical water issues and more than 50 recommendations for meeting the state’s water needs — everything from data collection to outreach and education.

What the strategy lacks, however, is a plan for implementation. That’s what Oregon aims to accomplish with its 100-year Water Vision.

Gov. Kate Brown kicked off Phase I of the vision last year, and it was officially announced to the public in August. Officials are now visiting communities across the state for a series of meetings to gather feedback and learn about each region’s unique water challenges.

Meta Loftsgaarden, executive director of the Oregon Watershed Enhancement Board, is leading the 100-year Water Vision. She said the meetings are meant to bring together different interests, eyeing strategic investments to improve water systems.

Systems can include both natural infrastructure, such as healthy lakes, rivers and aquatic habitat, and facilities like dams, irrigation canals and wastewater treatment plants.

During the last half-century, Loftsgaarden said, Oregon has under-invested in water infrastructure. Fifty years ago, the federal government provided 60% of funding. Now, that percentage has dropped under 10%, according to the Congressional Budget Office.

Meanwhile, Oregon’s population has grown from just over 2 million people in 1969 to 4.1 million in 2018, increasing demand for water in cities and for farmers to grow more food.

To overcome these challenges, the group in Gresham emphasized the need for collaboration among individuals, organizations and state agencies to fund projects. They also highlighted the need to gather more data on water usage to drive better policies and decision-making.

Clair Klock, who has served for 21 years as a resource conservation specialist for the Clackamas Soil and Water Conservation District, said that until the state knows how much water it has, it cannot effectively manage the resource.

Klock grows 2 acres of blueberries at his farm in Corbett, near the Sandy River. In 1984, he drilled a groundwater well to water his crops, which he said has since gone mostly dry.

“Groundwater is going down in all basins across the state,” Klock said. “We still don’t have a handle on how much we use.”

A two-page early draft of the 100-year Water Vision lists four main goals for water stewardship: health, economy, environment and safety. It seeks to balance water not only for humans, but also native fish and wildlife living in healthy watersheds.

Kat Brigham, who serves on the Board of Trustees for the Confederated Tribes of the Umatilla Indian Reservation in Eastern Oregon, said her goal is to see healthy populations of salmon return to Oregon, which are a key component of the tribes’ First Foods.

But Brigham said water is a shared resource, and she knows they cannot go it alone.

“We need to recognize each other, respect each other and support each other,” Brigham said. “If we work together, everybody is going to benefit.”

Part of the five-hour meeting focused on several success stories of water conservation and investment. Jed Jorgensen, director of energy solutions for the nonprofit Farmers Conservation Alliance, discussed the group’s irrigation modernization program, which is now working with 24 irrigation districts representing 25-30% of irrigated land in Oregon.

“I look at modernizing these systems as one of the biggest opportunities that exists to improve the natural environment, our rivers, and ensure we have adequate water supplies for our farmers,” he said.

Keri Handaly, with the city of Gresham, also talked about the Clean Rivers Coalition, engaging with communities to spur grassroots protection of water resources.

“We’re trying to become Oregon’s new water messengers,” said Handaly, who serves on the coalition’s steering committee. “We need to talk about why we need to protect our water.”

Loftsgaarden said the 100-year Water Vision will likely remain in draft form for some time, but will eventually become a guiding document to prioritize investment — similar to the state’s Transportation Plan.

“We’re in a really good space where I think people are ready, and want to have this conversation,” she said.