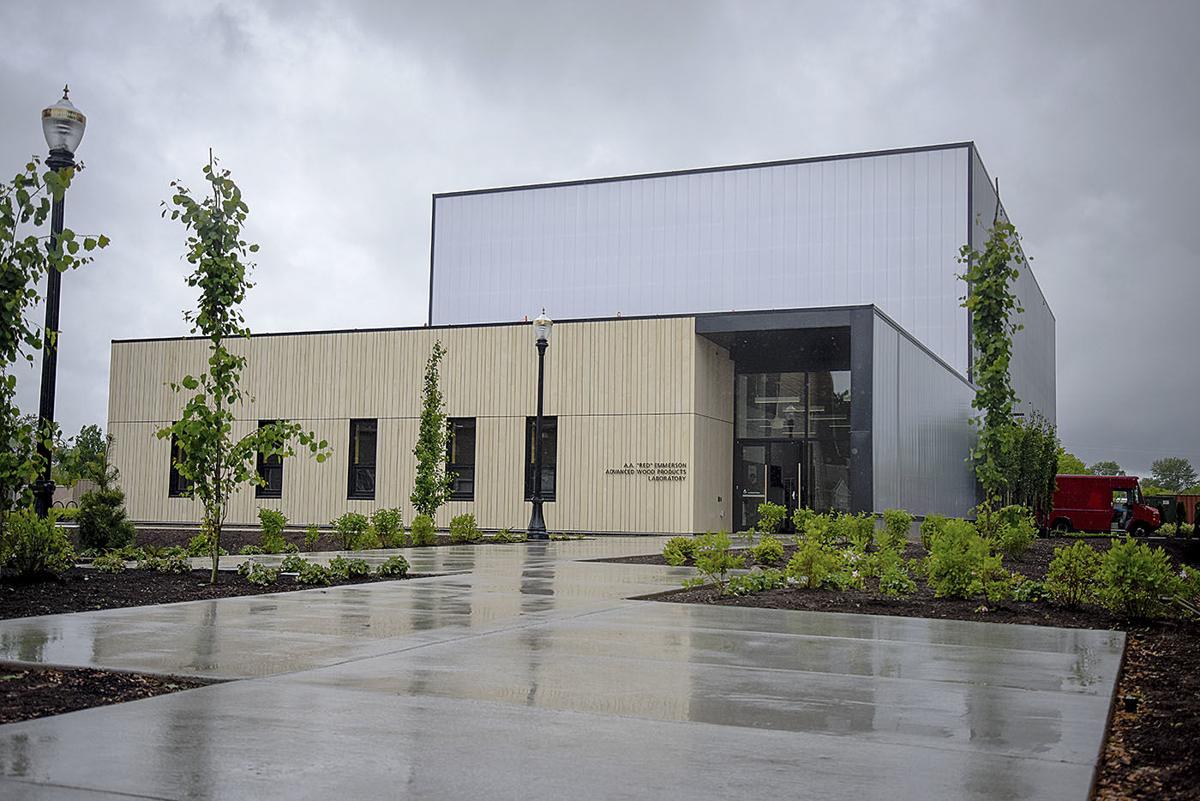 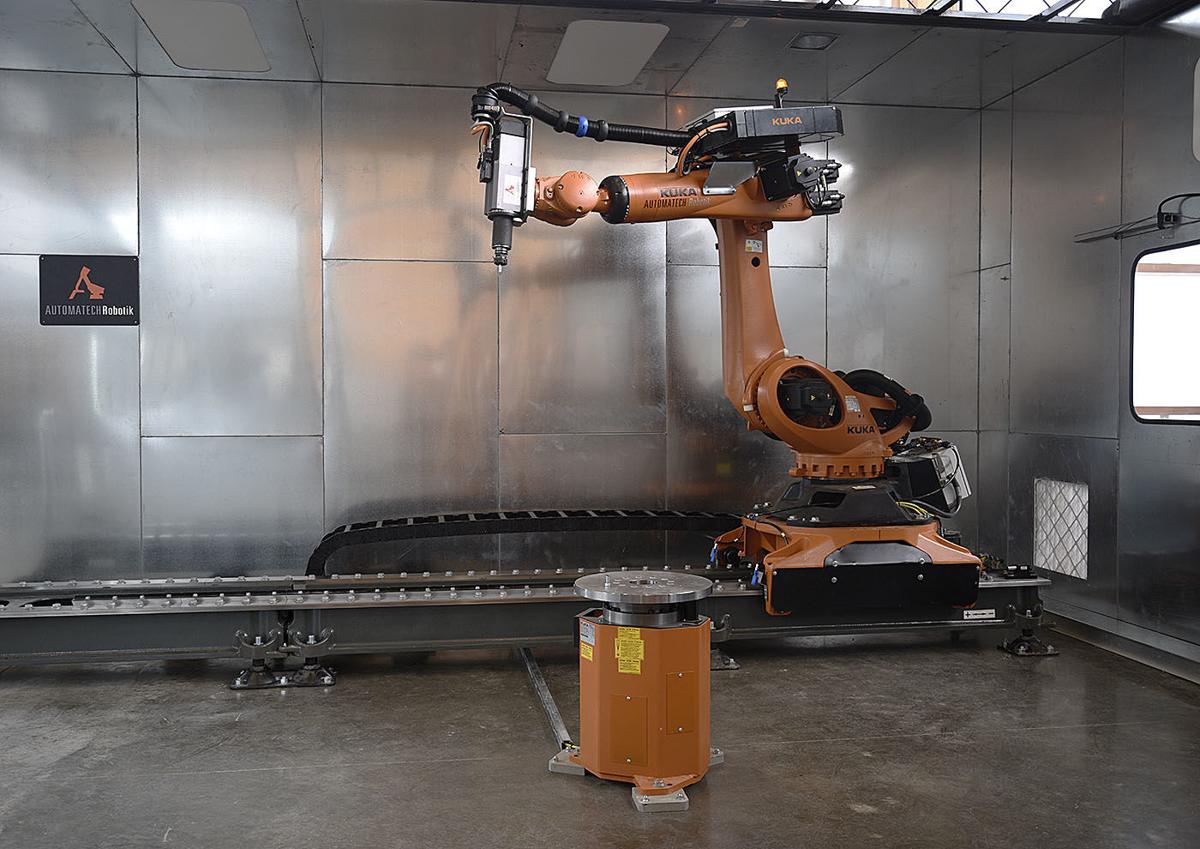 The Advanced Wood Products Laboratory at Oregon State University will house the TallWood Design Institute, a research collaborative for mass timber in tall commercial buildings. It includes state-of-the-art equipment such as a KUKA milling robot. 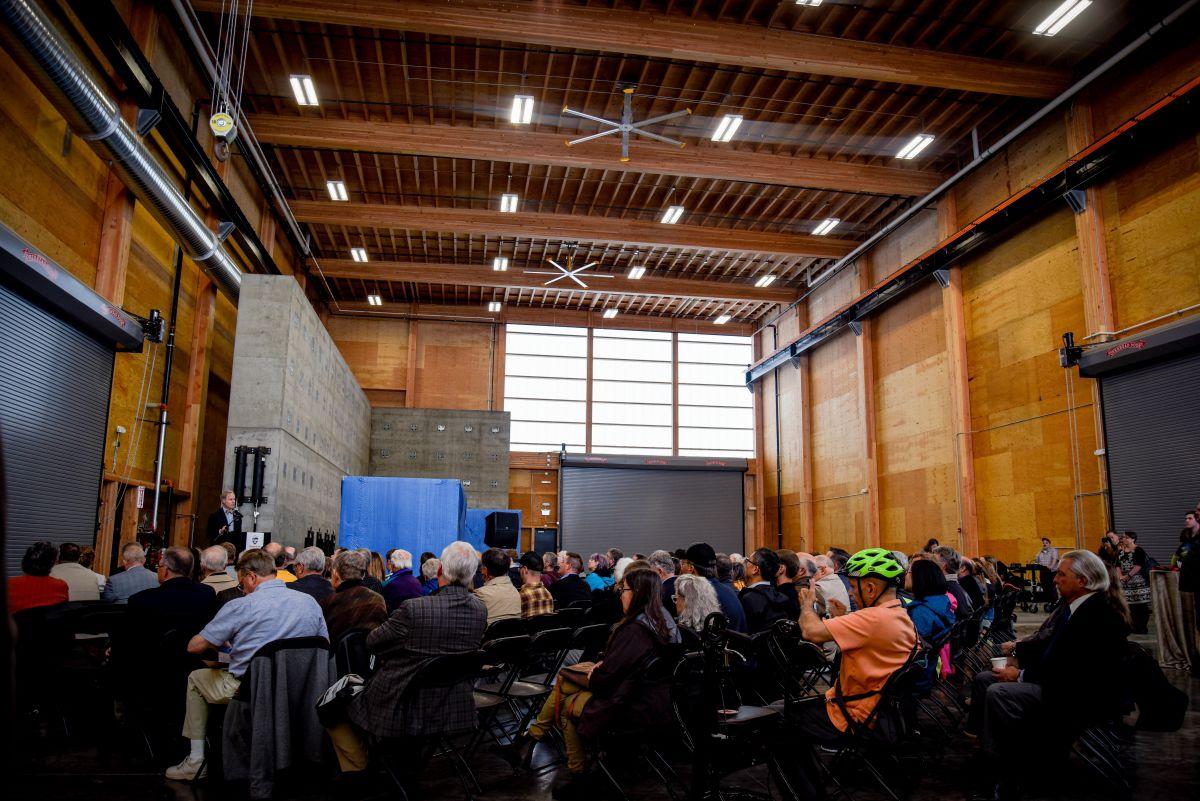 Interim Dean of the College of Forestry, Anthony Davis, opened the reception for the dedication of the lab.

The Advanced Wood Products Laboratory at Oregon State University will house the TallWood Design Institute, a research collaborative for mass timber in tall commercial buildings. It includes state-of-the-art equipment such as a KUKA milling robot.

Interim Dean of the College of Forestry, Anthony Davis, opened the reception for the dedication of the lab.

OSU celebrated the grand opening of the A.A. “Red” Emmerson Advanced Wood Products Laboratory on Oct. 10 at the main campus in Corvallis. The 17,500-square-foot lab is part of the College of Forestry’s new Oregon Forest Science Complex, which broke ground in 2016.

Mass timber refers to products such as cross-laminated timber, or CLT, and glue-laminated beams used in the construction of buildings, as opposed to steel or concrete.

While Europe has pioneered mass timber since the early 1990s, Oregon became just the first state last year to adopt building codes that allow for wood-framed buildings up to 18 stories tall.

That is due in part to research by the TallWood Design Institute, a partnership between OSU’s College of Forestry and College of Engineering, and the University of Oregon’s College of Design.

Iain Macdonald, director of the TallWood Design Institute, said the program has close links with Oregon’s manufacturing community, including both of the state’s mass timber producers — D.R. Johnson Lumber in Riddle, Ore., and Freres Lumber in Lyons.

“We have also been able to conduct structural, fire, acoustic and durability testing for many of the mass timber building projects that have taken shape around Oregon and beyond,” Macdonald said.

The grand opening featured live demonstrations of state-of-the-art manufacturing equipment, such as a milling robot used to carve mass timber beams and panels.

Anthony Davis, interim dean of the OSU College of Forestry, said wood construction “has to be a cornerstone in mounting an aggressive front in challenging our sustainability and climate crises.”

“Oregon is blessed with having some of the most productive and diverse forests in the world,” Davis said. “Because of this we are better positioned than anyone else to serve as a bridge between our natural resources and meeting demands of urban growth and renewal, while also continuing to conserve habitat and provide recreational access.”

Sierra Pacific Industries is the second-largest lumber producer in the U.S., and donated $6 million toward construction the Oregon Forest Science Complex.

The $79.5 million complex, funded through a mix of public and private money, will also include the new 95,000-square-foot Peavy Hall, which is scheduled to open in spring 2020.

According to OSU, enrollment in the College of Forestry has steadily increased over the last decade, with the number of applications and admitted students up nearly 20% in 2018.

“These new facilities represent a critical step in the pathway toward using renewable materials in new ways,” Davis said. “Our mission is to use this space as a model of how we can pair Oregon’s intellectual capacity with our natural resources and capitalize on our spirit of innovation.”