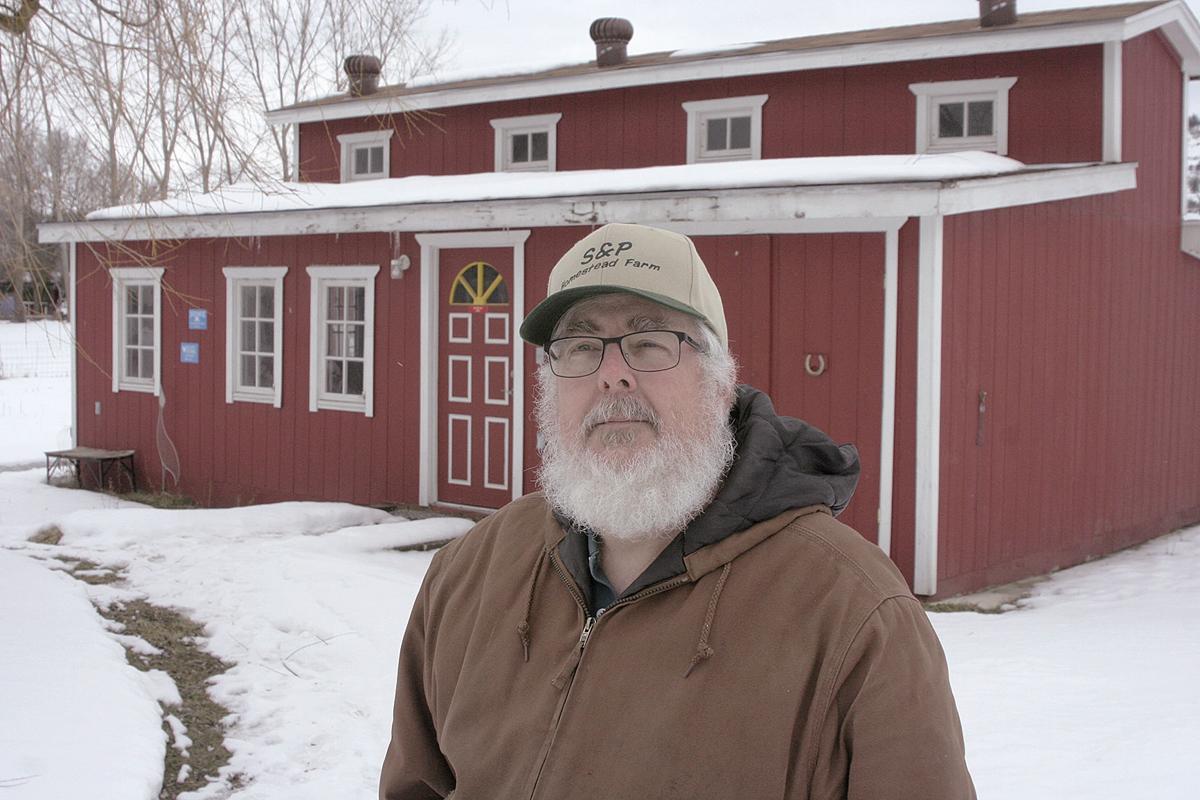 Paul Puhek stands outside the barn March 8 on his 3-acre farm in Otis Orchards, Wash. 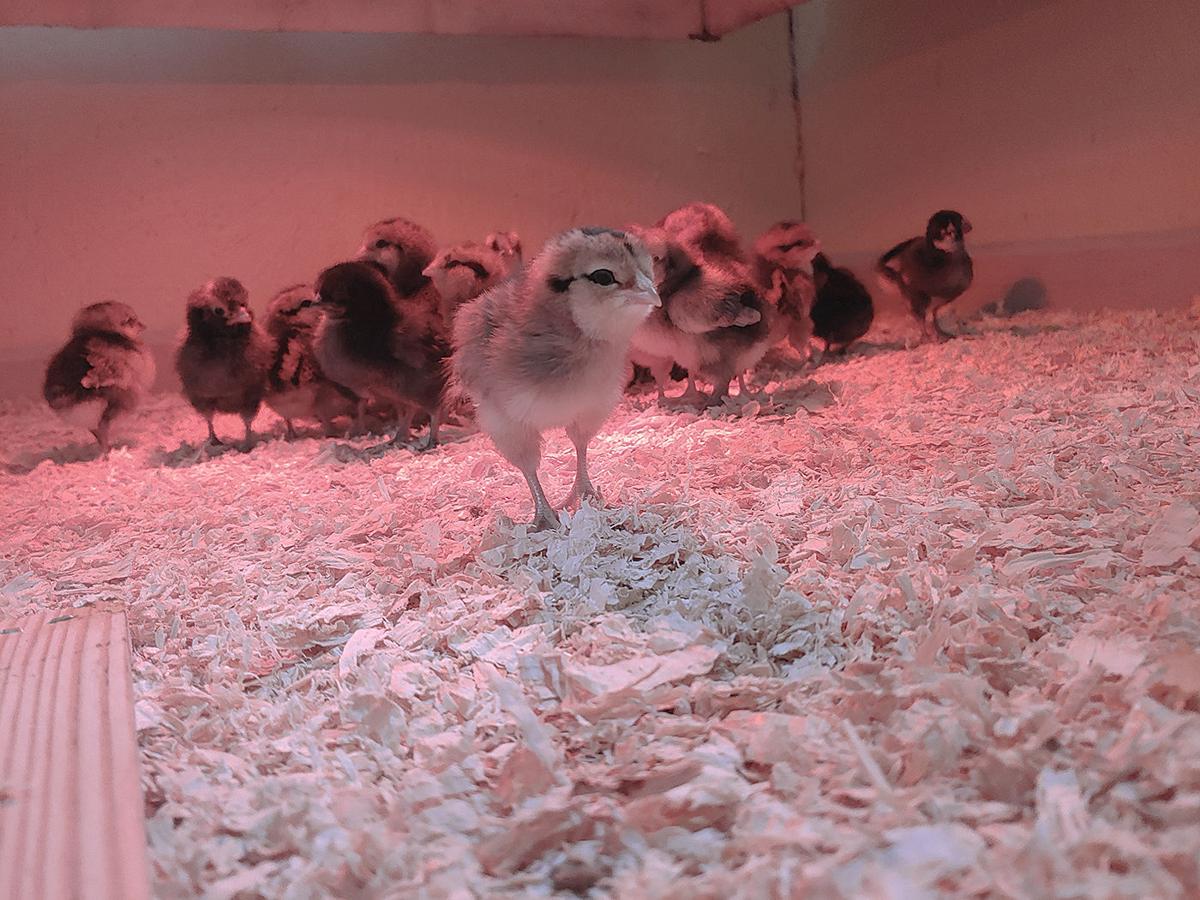 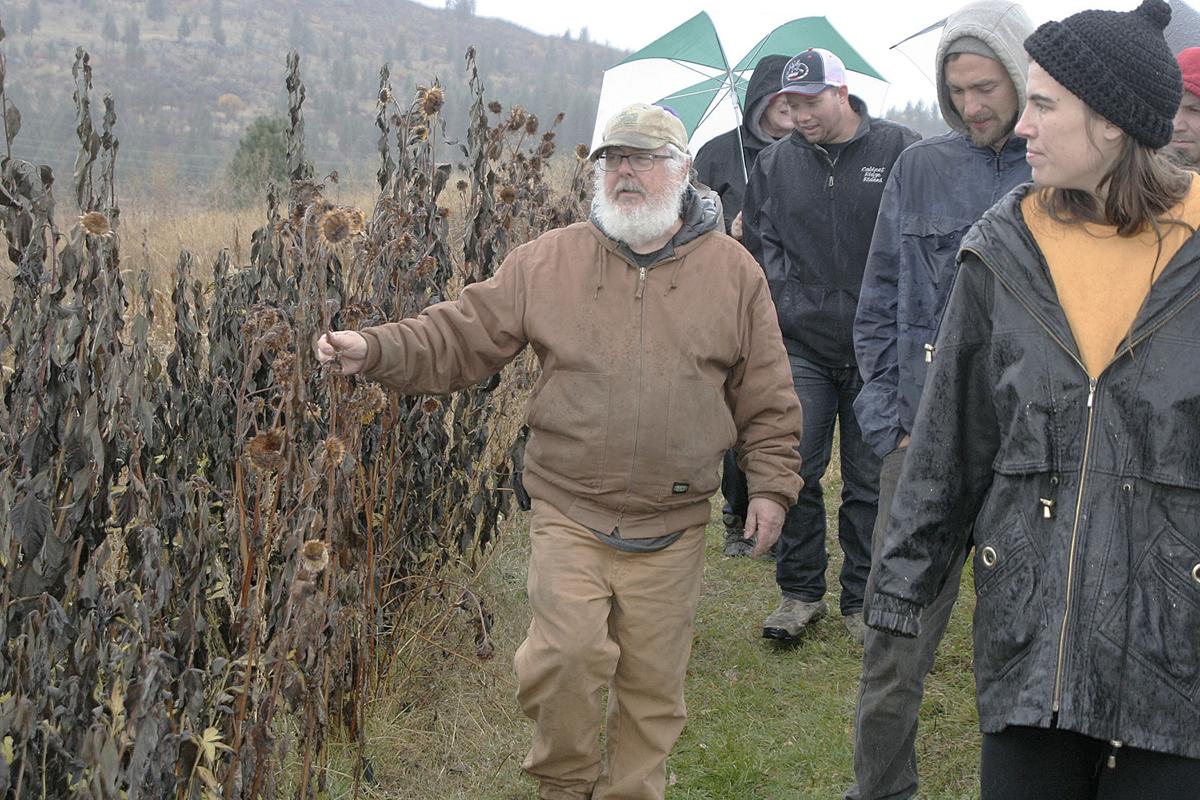 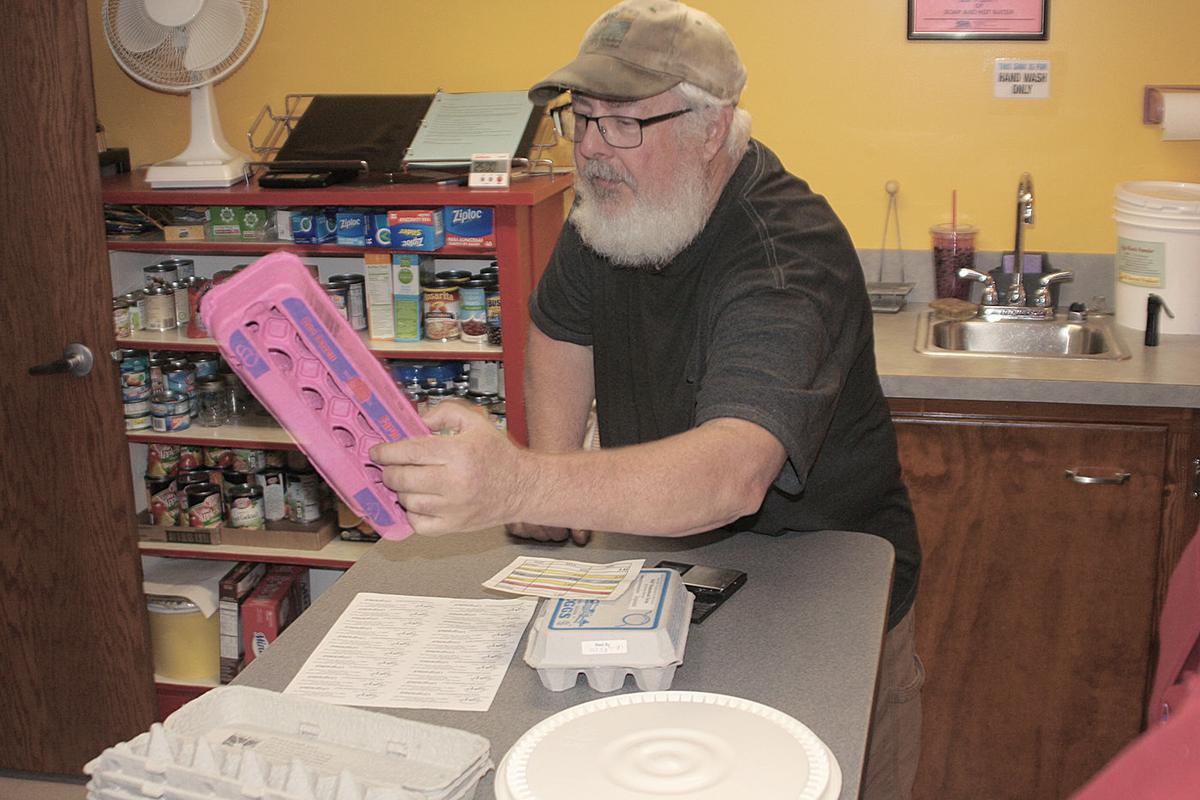 Paul Puhek offers students in a Washington State University Cultivating Success class a look at the different ways he packages his eggs Oct. 19 on his farm in Otis Orchards, Wash. 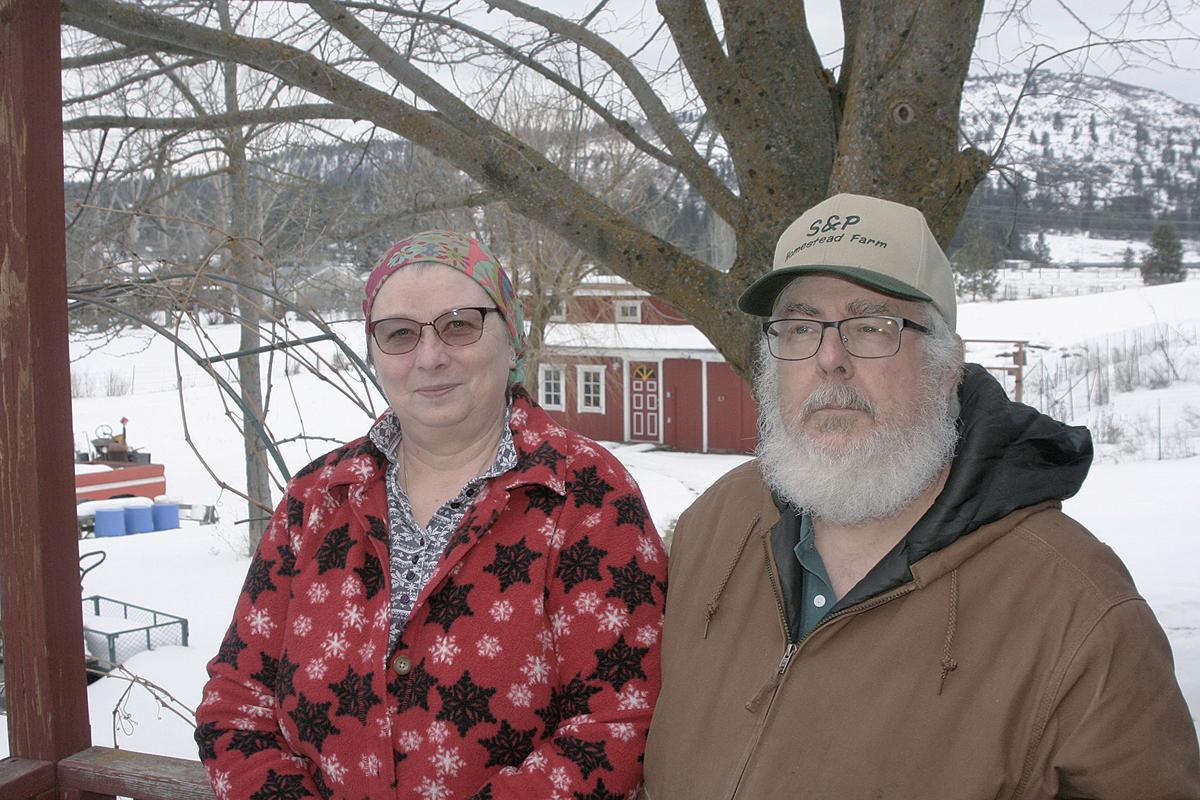 Sue and Paul Puhek at their Otis Orchards, Wash. farm, the afternoon of March 8. 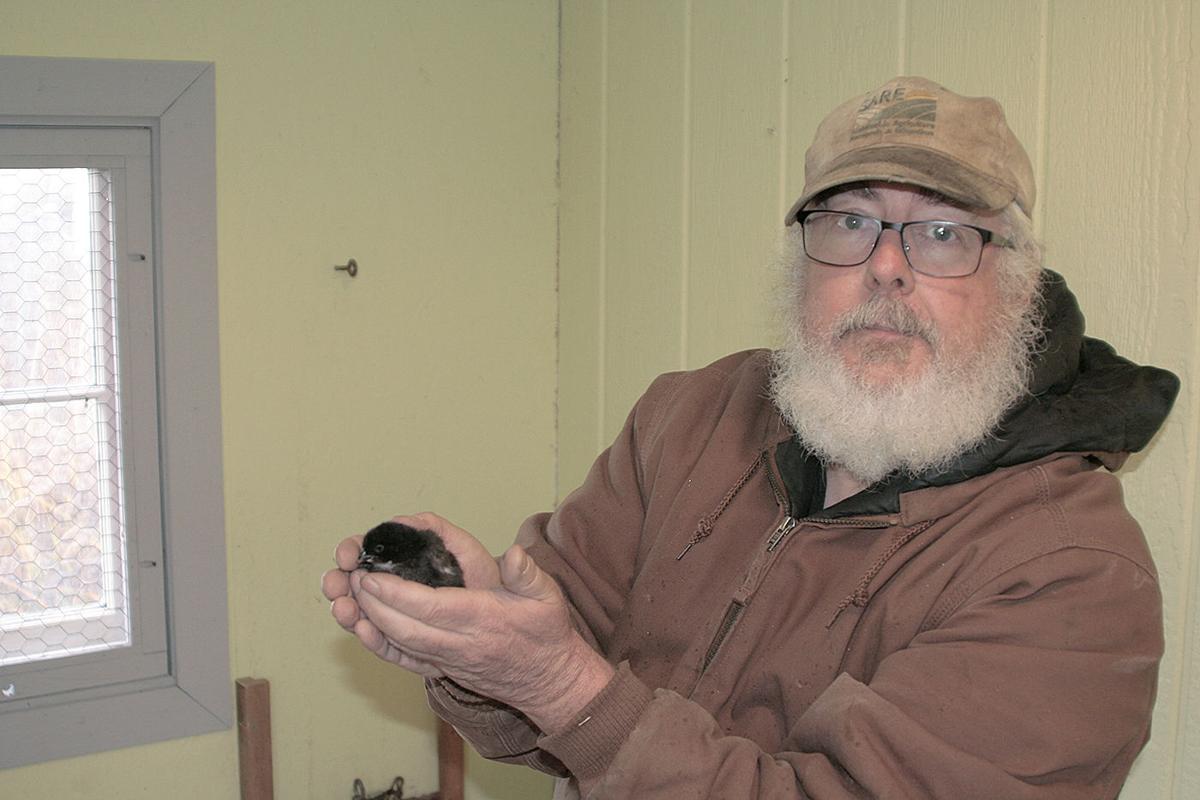 Paul Puhek holds up one of the new chicks at his small farm in Otis Orchards, Wash., the morning of Oct. 19. Puhek and his wife, Sue, are regular vendors at the Liberty Lake Farmers’ Market and share their expertise with customers and new small-scale farmers.

Paul Puhek stands outside the barn March 8 on his 3-acre farm in Otis Orchards, Wash.

Paul Puhek offers students in a Washington State University Cultivating Success class a look at the different ways he packages his eggs Oct. 19 on his farm in Otis Orchards, Wash.

Sue and Paul Puhek at their Otis Orchards, Wash. farm, the afternoon of March 8.

Paul Puhek holds up one of the new chicks at his small farm in Otis Orchards, Wash., the morning of Oct. 19. Puhek and his wife, Sue, are regular vendors at the Liberty Lake Farmers’ Market and share their expertise with customers and new small-scale farmers.

The Puheks received the chicks the morning of Oct. 19, replacing their entire flock, which had reached four years old.

“They’re eating almost the same, and you’re getting 20% of the eggs,” Paul said.

Since 2002, Paul and Sue have operated S&P Homestead Farm in Otis Orchards, Wash., about 19 miles northeast of Spokane. They are among a growing number of small-scale farmers across the nation who have found success.

Their farm income is split between egg production and produce. In addition to eggs, they raise such vegetables as green beans, onions, carrots, beets, peas, Swiss chard and eggplant on roughly 1.5 acres of their 3-acre parcel.

The farm is one of the original vendors at the Liberty Lake Farmers’ Market. It also sells through the LINC Foods cooperative in Spokane.

Their expertise is a sought-after commodity, as other small-scale farmers seek information from them about succeeding in agriculture. They frequently teach the basics of raising chickens in classes through the Washington State University’s Spokane County Extension and the Spokane County Library District.

A Cultivating Success Beginning Farming and Ranching class for aspiring small-scale farmers toured their operation the same October morning they received their shipment of chicks.

“They’re doing a variety of things on just a couple of acres, really,” said Pat Munts, small farms coordinator with WSU Spokane County Extension. “To me, they just kind of typify what a small farm family could look like. It’s all at a scale that a beginning farmer could do.”

Sue, 60, is a fourth-generation farmer. Her family raised vegetables, chickens and rabbits in the suburbs of Phoenix, Ariz.

Paul, 61, is a lifelong Otis Orchards resident. His family truck-farmed and kept a large garden as he grew up, selling raspberries and offering U-pick crops.

They have three adult children, who help on the farm when they can.

Paul still keeps a full-time job as a technical drafter, a job he’s held for 40 years. Sue does not work outside the farm.

The farm is profitable each year, Paul said.

“We can’t live off that profit, at this point, but it does make money,” he said. “I tell people it makes enough to make me want to do it again.”

Chicken and eggPaul and Sue both say their parents raised chickens while they were growing up.

Paul’s parents started when he was 5 years old.

“My mother always had chickens and it was, ‘OK, Sunday’s coming up, chicken dinner,’” Sue said. “She would just go out, ‘Eeny meeny miney, moe, who’s bugging me the most?’ Wring the neck, plucked them. ... ‘I’ve got too many roosters, which one of you are the meanest?’ and it would hit the pot. We would have chicken, whether it was roast chicken, fried chicken, chicken-and-dumplings or whatever. That’s the way I grew up.”

The couple started raising chickens in the mid-1980s, in a tiny barn with less than a dozen chickens providing eggs for their family.

They’d always have a surplus, so they put a sign out by the road: “Eggs for sale.”

“Of course, people will stop and buy eggs,” Paul said.

They then began selling eggs at the farmers’ market.

They can raise up to 120 chickens in the small building where they keep the birds.

Feed and straw for bedding are their biggest expense.

“When you’re buying chickens, the baby chicks are anywhere from $3 to $4 apiece,” Sue said. “It takes six months for that baby chick to lay an egg. So you’re feeding this $4 baby chick for six months feed that’s about $18 or so a bag until they start laying.”

After that six months, she said, the chickens lay eggs “like gangbusters” for the first year. After that, their productivity begins to taper off.

The Puheks plan to run their chickens for two years. For their older birds, they hope to find a butcher, a big need for small-scale farmers in the area.

Chefs have expressed interest in buying their spent layer hens, which they say have more flavor, but the chickens must be processed at a USDA facility to be sold.

It would be an added value, Paul said, but there’s a one- to two-year waiting list to rent portable slaughter facilities.

How did they get rid of the birds from their previous flock?

Raising vegetablesProduce accounts for the other half of the operation. The Puheks started farming after getting married in 1980.

“We were living in a trailer in a trailer park, and we literally tore up the backyard and planted vegetables,” Sue said. “Not only were we feeding us, we were feeding the neighbors.”

Sue is a certified master food preserver, so she can educate customers about canning, dehydrating and freezing if they purchase 5 pounds of carrots and aren’t sure what to do with them.

“Sometimes you have to not only develop your customer, you’re developing a market,” Paul said.

Approachability is key when selling at the farmers’ market, the Puheks say. They’ve seen other vendors grumble about answering customers’ questions all day, or sit in the back of the booth and ignore the people they hope will buy from them.

The Puheks also test their produce so they know how to advise their customers. For example, they experimented with purple carrots, now one of their top sellers, Sue said.

“We sell out of those first,” Paul agreed. “You can throw the produce out on a table and stand there, and hope it goes, or you can say, ‘Hey, come take a look at this.’”

But the farmers’ market only lasts 22 weeks each year. For chicken farmers, that creates a quandary: The chickens don’t stop laying once the market season is over.

In the off-season, the Puheks sell their eggs through the LINC Foods co-op to wholesale or straight to retail.

“They’re one of the last few really functioning farms in Otis Orchards, which is a historically important agricultural district in our region,” said Beth Robinette, co-founder of LINC Foods. “They’ve been able to keep that going in that area.”

The Puheks sell their eggs for $5 a dozen at farmers’ markets or $3 to $4 per dozen to the co-op.

The Puheks expect to remain profitable, even with the delay in egg production as the new flock matures.

Produce is also profitable, but they are at the mercy of the weather, Sue said. Costs are relatively low, as long as the couple watches their inputs and doesn’t have a crop loss.

When planting produce, Paul said, the couple factors in expected demand, including what they had too much or too little of the previous year.

“Everything you grow has to have somewhere to go,” he said. “If you grow it and don’t sell it, it’s actually costing you money — the cost of taking care of that produce, harvesting it, the seed — if it rots or gets sowed underground, it’s not just a lost sale, it’s lost revenue. You’re spending money on produce you’re not selling.”

Getting startedWhen they teach classes to beginning farmers, Sue tells students chickens are one of the easiest types of livestock to raise.

“They’re not too picky about where they live, what they eat, and you wind up getting eggs and meat,” she said.

Paul and Sue warn beginning farmers to be ready for chickens when they arrive.

Paul recommends having all infrastructure in place before buying.

They’ve seen too many instances of people purchasing chicks on a whim.

“They have nowhere to put them — they’re raising chickens in their bathtub or sticking them in a box in their laundry room,” Paul said. “OK, now they’re too big for the laundry room — where do they go?”

The Puheks have designed their operation to make things most efficient for them, not for the birds.

“(They’re) a good demonstration of how you can manage at a scale and still make a profit, but still maintain jobs and everything else,” she said.

Munts is particularly impressed with the Puheks’ willingness to share their successes with other small-scale farmers.

“I can’t say enough about how they’ll say, ‘Yes,’ every time I call them,” she said. “They’re just so community-minded, it’s just wonderful.”