Approximately 900 people attended the Oregon State University Small Farms Conference on Feb. 22. The event has grown from about 125 attendees its first year. 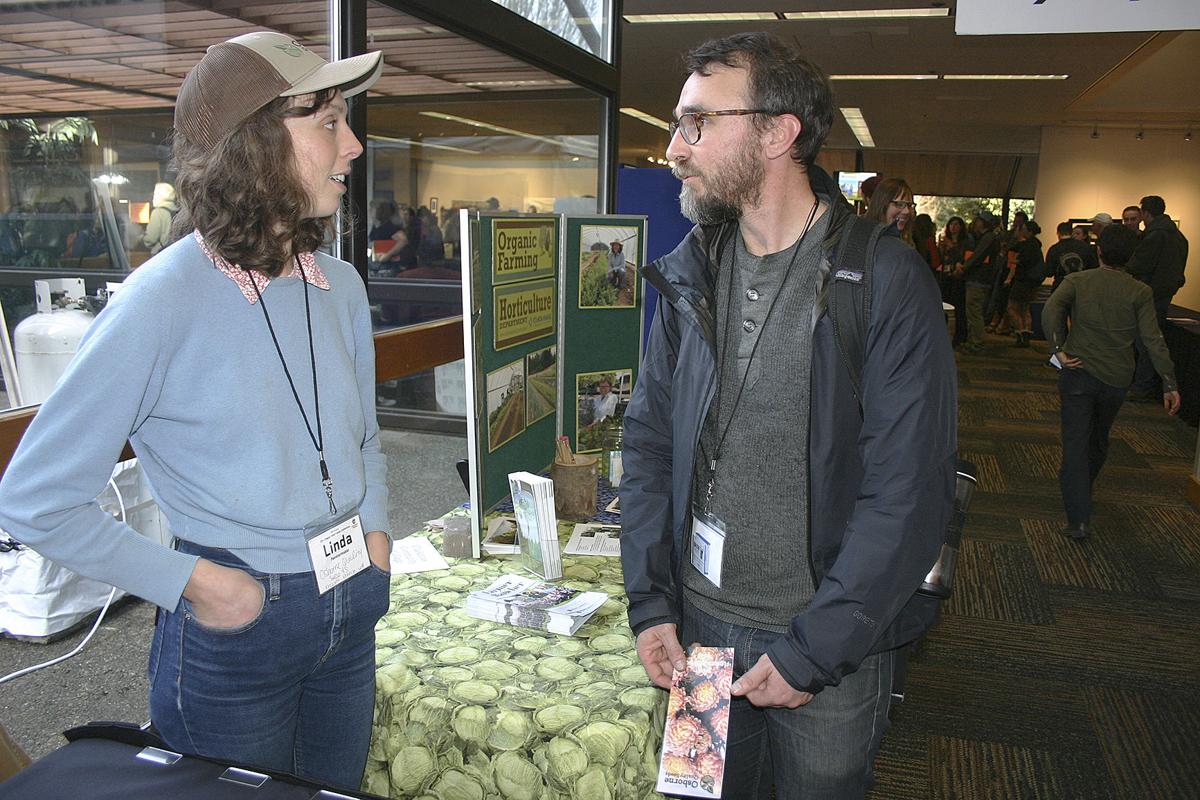 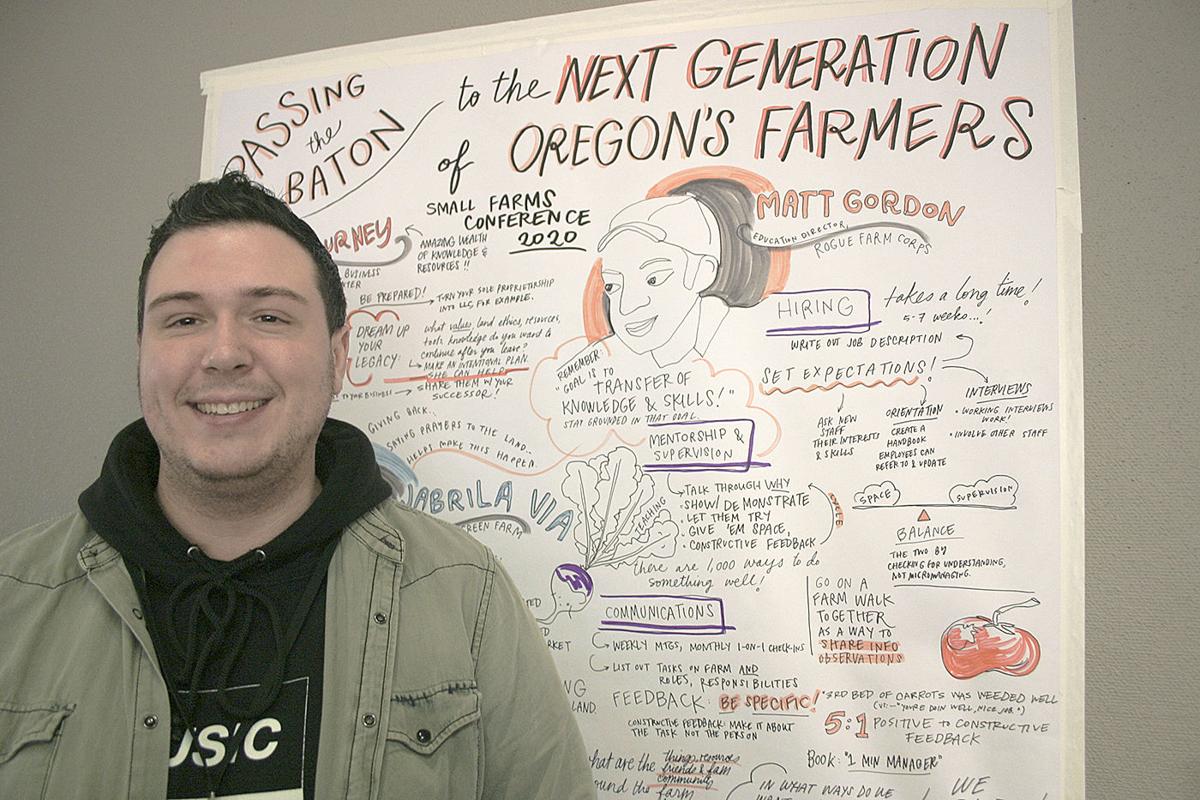 Jake Carpenter attended the annual Oregon State University Small Farms Conference on Feb. 22 as he and his wife, Freya, prepare to take over their family’s farm in Oregon City, south of Portland. 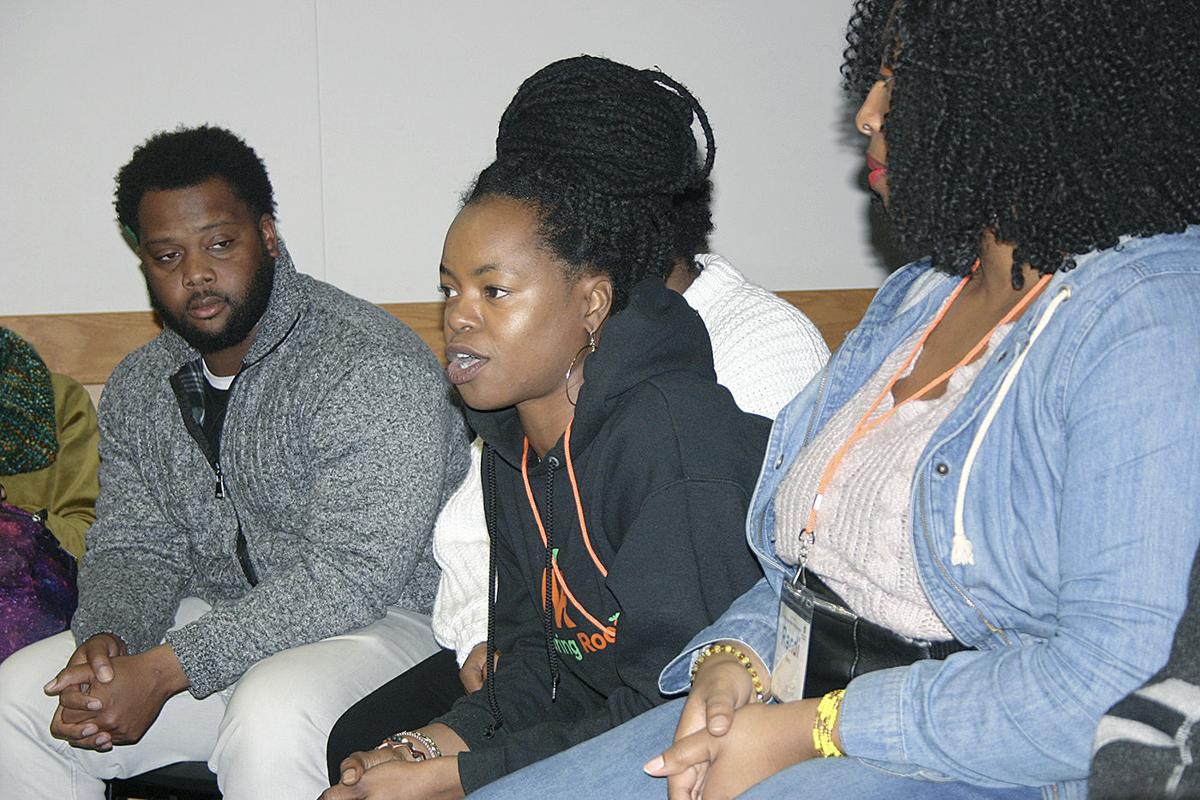 Nyema Clark, executive director of Nurturing Roots in Seattle, talks about her experiences as a black farmer during a panel discussion at the annual OSU Small Farms Conference. 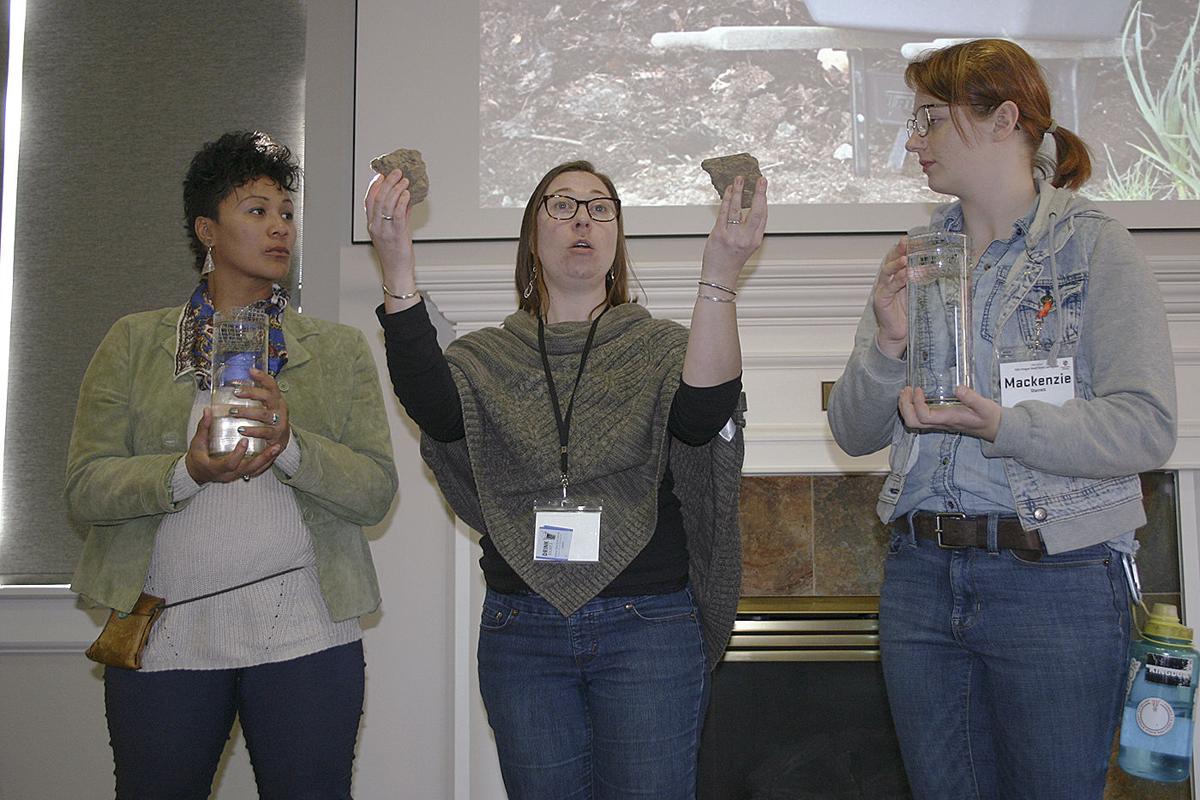 Teagan Moran, center, with the Oregon State University Extension Service, discusses the health of two soil samples assisted by volunteers Roberta Eaglehorse-Ortiz, left, and Mackenzie Starrett. They participated in the recent Small Farms Conference on the OSU campus in Corvallis. 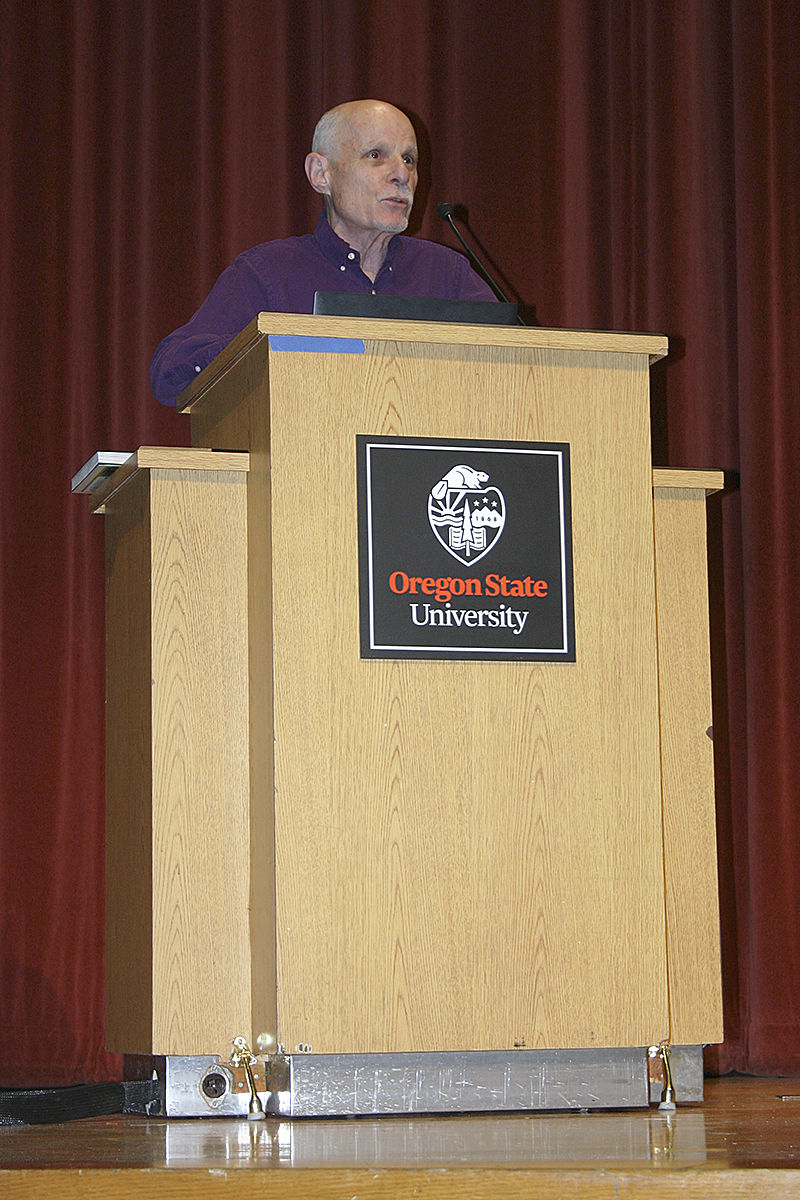 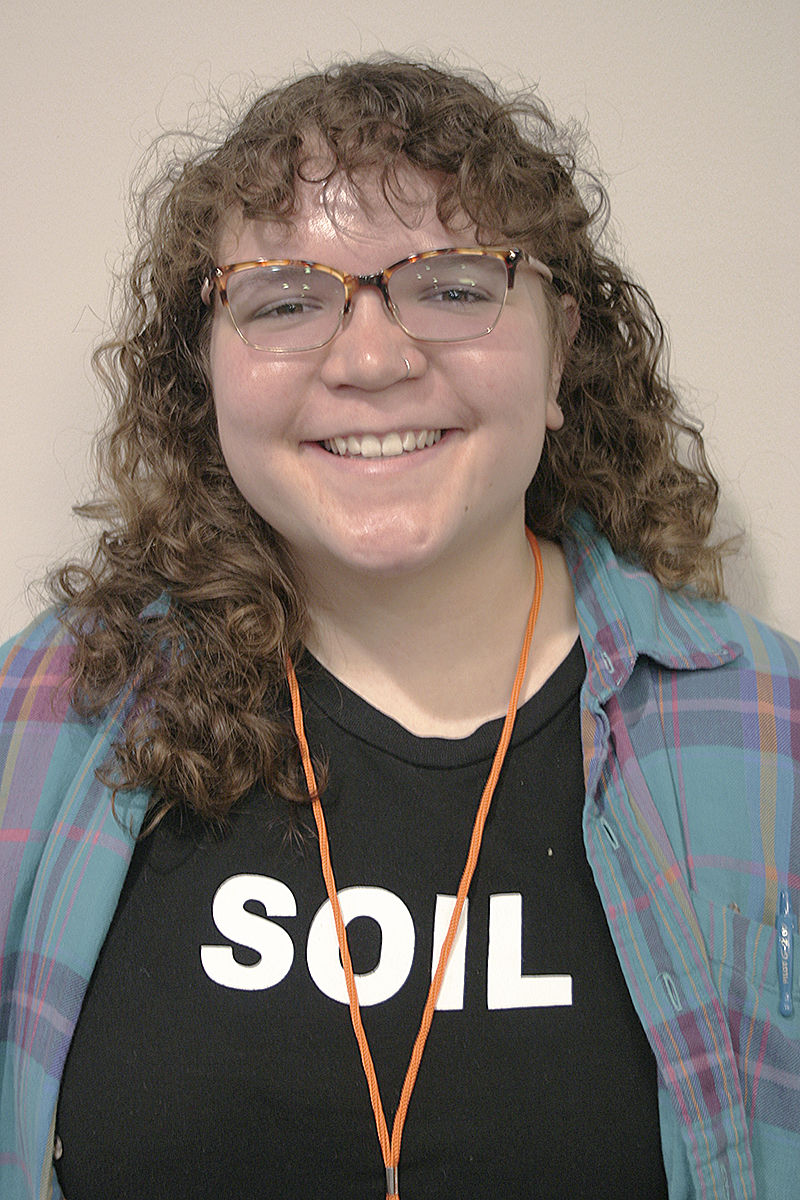 Approximately 900 people attended the Oregon State University Small Farms Conference on Feb. 22. The event has grown from about 125 attendees its first year.

Jake Carpenter attended the annual Oregon State University Small Farms Conference on Feb. 22 as he and his wife, Freya, prepare to take over their family’s farm in Oregon City, south of Portland.

Nyema Clark, executive director of Nurturing Roots in Seattle, talks about her experiences as a black farmer during a panel discussion at the annual OSU Small Farms Conference.

Teagan Moran, center, with the Oregon State University Extension Service, discusses the health of two soil samples assisted by volunteers Roberta Eaglehorse-Ortiz, left, and Mackenzie Starrett. They participated in the recent Small Farms Conference on the OSU campus in Corvallis.

CORVALLIS, Ore. — For Jake Carpenter, the strategy was to divide and conquer at the annual Oregon State University Small Farms Conference on Feb. 22.

Carpenter and his wife, Freya, are preparing to take over their family’s 4-acre urban farm in Oregon City, south of Portland. The farm grows a smorgasbord of seasonal produce, including tomatoes, sweet corn, apples, pears and leafy greens, which it sells at the Oregon City Farmers’ Market.

OSU began hosting the Small Farms Conference 20 years ago to give farmers like the Carpenters information and resources to bolster their bottom line. Over 92% of Oregon farms are considered “small” under the USDA definition, meaning they make less than $350,000 in annual gross income.

With so many seminars to choose from, Carpenter said he and Freya decided to split up and canvas as much of the conference as possible. He sat in on sessions covering hoop houses, dry farming and hemp production, while she went to talks on farm stands, winter vegetables and basics for beginning farmers.

“It’s been great,” Carpenter said. “The content is what we were expecting. The tips and tricks are super helpful.”

Carpenter said they expect to buy the farm from Freya’s parents sometime later this year. His mother-in-law, Jackie Hammond-Williams, is one of the founders and a longtime manager of the Oregon City Farmers’ Market, though she plans to retire in May.

Their goal, Carpenter said, is to provide healthy, nutritious food to their family and community. The biggest challenge is getting the most out of the farm, without sacrificing sustainability.

“That takes a lot of effort and a lot of learning to do that the right way,” he said.

A state of mind

Garry Stephenson, director of the Center for Small Farms and Community Food Systems at OSU, said the event focused specifically on expanding farmers’ markets when it began in 2000. About 125 people attended that first year. Since then, it has grown to about 900 attendees who pack the LaSells Stewart Center and CH2M Hill Alumni Center on the Oregon State campus in Corvallis.

“We get all of those people for one day in the same room to interact,” Stephenson said. “It’s not just farmers. It’s the people who support them.”

According to the latest USDA Census of Agriculture, Oregon had 37,616 total farms in 2017, of which 34,714 were labeled small farms based on income. Yet just 682 farms accounted for a whopping 75% of the state’s $5 billion in agricultural sales — a troubling sign of increasing consolidation, Stephenson said.

“We’re losing that classic medium-size farm that we identify as the family farm,” he said.

There is no way small farms can compete at that large scale growing commodity crops, Stephenson said. That’s why, for the last 20 years, the Small Farms Conference has focused more on cultivating specialty crops and developing local or regional marketing channels.

“(Small farms) have more of an entrepreneurial approach to farming, because they really need to be nimble,” Stephenson said.

Economics aside, Stephenson said he thinks of small farms as a state of mind. In recent years, the conference has pivoted to include an emphasis on social and food justice issues such as climate change adaptation and diversity in farming.

Danny Percich, of Full Plate Farm in Ridgefield, Wash., said the event is a chance for him to network and pick up new ideas that he can take back to the farm.

“It’s always invigorating, too,” Percich said. “It kind of gets you excited for the growing season.”

Teagan Moran, a small farms education program assistant for the OSU Extension Service, led a session in the morning tailored to new and beginning farmers. A beginning farmer, she said, is anyone who has been farming for less than 10 years.

While farming is deeply personal, Moran said deciding what to grow boils down to three main questions: What do you want to do? What can you do? and What can you sell?

“This is not something that comes overnight,” Moran said. “It is a journey. All of you are at different points on this farming path.”

Before planting, Moran said, it is critical to evaluate several key resources on the farm, with soil quality serving as the foundation for everything. If a farm has Class I soil, it is considered prime farmland, she explained, and the better the soil, the more options are available for high-value crops.

“Some soils can be improved, but will never be as versatile as Class I soil,” Moran said.

The USDA Natural Resources Conservation Service has an online soil survey where farmers can look up which classifications of soil they have on their property. Moran also recommended farmers buy a soil test kit to see if they need to add any organic matter, nitrogen or other nutrients in the ground.

“You can build soil,” she said. “There is hope, even if you’re working with a challenging place.”

In addition to soil, Moran said, location, climate, water rights and other farm infrastructure will directly impact what farmers can grow. Even without irrigation, she said some crops, such as Christmas trees, hay and grains, can still thrive locally depending on climate and rainfall.

Angel Hammon, a 21-year-old senior at OSU majoring in agricultural sciences, said she is interested in running her own farm and starting a farm-to-table restaurant. She participates in the college’s Organic Growers Club, which is how she heard about the Small Farms Conference.

“It has been fun to just fit in immediately, knowing that other people here have the same energy and passion for agriculture that I have,” Hammon said.

Farm production issues were not the only topics of discussion at the conference.

A panel of black, indigenous and Latino farmers gathered to share their experiences in Oregon and around the Pacific Northwest, touching on themes of race and food justice where communities of color have struggled to gain access to healthy, affordable food.

OSU chartered a bus to bring attendees from the previous day’s Back to the Root conference in Portland, organized specifically for black farmers. Laws prohibited African-Americans from buying land in Oregon until 1929 — the same year as the stock market crash that kicked off the Great Depression — and today black farmers make up only 1% of all producers across the country.

“We have a lot of health disparities in our community,” said Nyema Clark, executive director of Nurturing Roots in Seattle, a farming and education program fostering wellness around the city’s Beacon Hill neighborhood. “To us, it’s a matter of really saving our generation.”

Clark started Nurturing Roots in 2016. She does not come from a traditional farming background, and did not attend school for agriculture. But she said she wanted to teach people how they could support themselves, creating healthier bodies and healthier communities.

“Nurturing Roots is just about regaining humanity in all of this,” Clark said.

Melony Edwards, a farm manager and advocate from Whidbey Island in the Puget Sound, also spoke on the panel, where she described the challenge she faced getting into farming as an African-American. Like others, Edwards said she felt a connection to the land that comes from her own roots. Yet she continues to struggle, she said, with people’s attitudes and acceptance of her.

“I get these strange looks, even today,” Edwards said.

Food justice is an important subject, Edwards said, and she urged everyone to step up and support farmers from all backgrounds.

“We’re not asking for handout,” she said. “We’re asking for a hand-in.”

Renard Turner, of Vanguard Ranch in Gordonsville, Va., said the primary challenge for small farms is to become profitable and sustainable in today’s marketplace.

It may be difficult, but it can be done, said Turner, one of the conference’s keynote speakers. His solution is to combine value-added products with direct-to-consumer marketing to increase revenue while cutting out the middleman.

Turner and his wife, Chinette, raise meat goats on organically managed pastureland, which they process into ready-to-eat meals such as burgers, curries and kabobs. The couple purchased a mobile food cart to sell directly at major events including the State Fair of Virginia.

That vertically integrated business model, Turner said, also allows them to avoid selling at slaughterhouse prices and guarantee the quality of their product from field to plate.

“Don’t give away the power that you have to the middleman. He’s not your friend,” Turner said.

For example, Turner said, the highest prices farmers can usually hope to get from the slaughterhouse is about $3 per pound. Those slaughterhouses will then turn around and sell the same meat to customers for $9-$10 per pound.

Small farmers have to be creative and committed to earn extra money through niche markets and direct-to-consumer sales, but Turner said there are options out there.

“It takes more initiative on your part, but I think it’s exponentially more rewarding for me as a producer to do that,” he said.

Stephenson, with the OSU Center for Small Farms, said if farmers can take home one inspiring lesson from the conference, then it is a success.

“That economy of scale is what those farmers are trying to do,” Stephenson said. “It’s a small business way of thinking.”