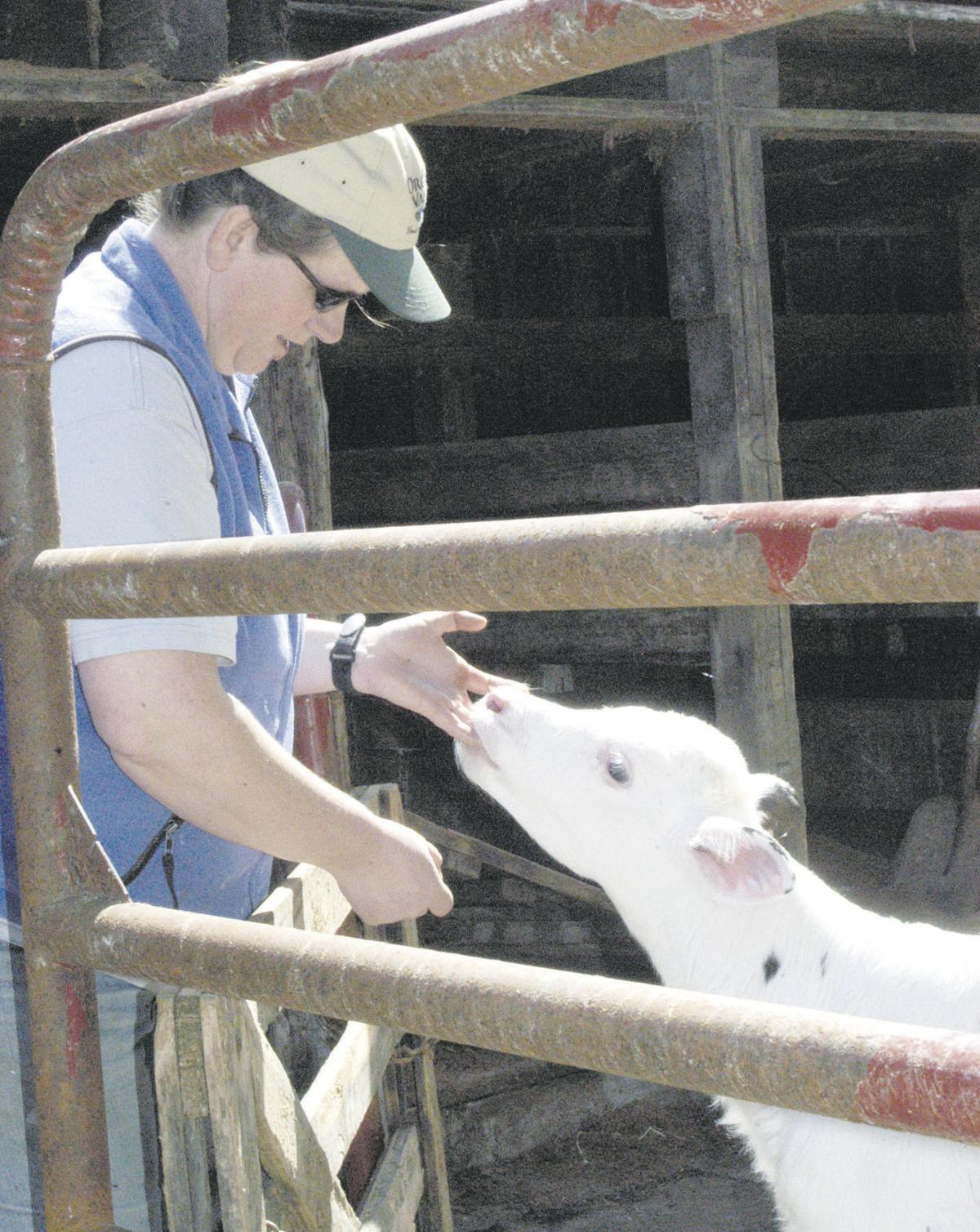 Steve Brown/Capital Press A day-old calf, an almost pure-white Holstein, nurses at the fingers of Linda Styger at her dairy near Chehalis, Wash. 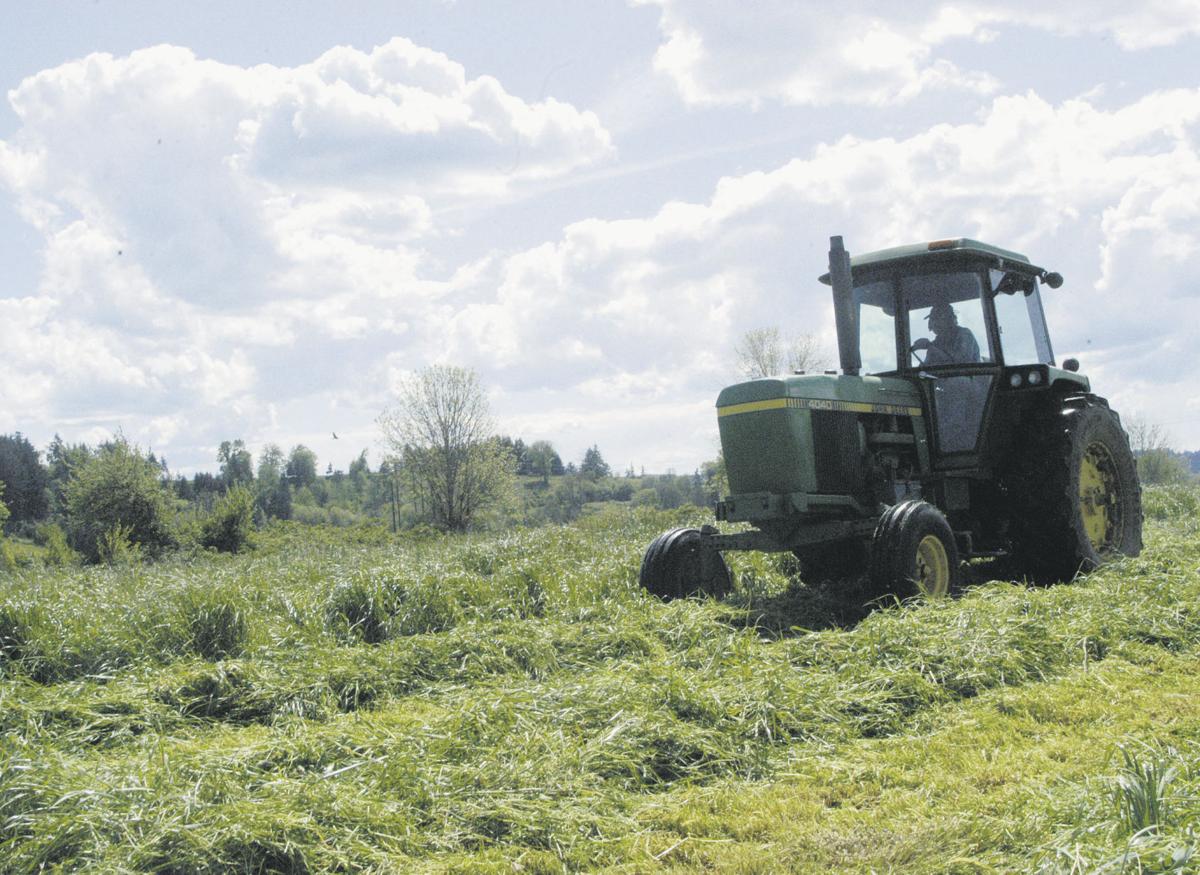 Steve Brown/Capital Press Andy Styger pulls a swather through his hay fields near Chehalis, Wash. The long, wet spring delayed cutting of the hay, which will be chopped and put into long "sausages" for next winter's forage. Soon his cows will be turned out into the fields for rotational grazing.

Steve Brown/Capital Press A day-old calf, an almost pure-white Holstein, nurses at the fingers of Linda Styger at her dairy near Chehalis, Wash.

Steve Brown/Capital Press Andy Styger pulls a swather through his hay fields near Chehalis, Wash. The long, wet spring delayed cutting of the hay, which will be chopped and put into long "sausages" for next winter's forage. Soon his cows will be turned out into the fields for rotational grazing.

CHEHALIS, Wash. -- Owning a small dairy has enough advantages to keep Andy and Linda Styger happy -- and plenty of work to keep them busy.

They've been dairy farming for 20 years. Before that they were "hobby farming," Linda Styger said. "We had some sheep and pigs."

Andy's family came from Switzerland in 1919. The Stygers are the third generation -- and possibly the last -- on the family farm.

"It doesn't look like our children will follow in farming," Linda said. "Maybe others in the family will."

In the meantime, the Stygers have developed an operation that has 65 milking cows on 80 acres of pasture, usually from mid-April through the first of November.

"The long rainy spring has delayed our cutting hay for winter silage," Linda said. "Once it's dry enough -- in another few days, it looks like -- we'll swath the hay, let it wilt, then chop it and package it up for next winter's silage. It's usually about 800 tons."

She said there's not much left of last winter's silage. As much as the Stygers are eager for the field to dry up, the cows are even more so, she said.

"Once we've got the hay off there, they can get out there and graze."

She described the intensified rotational grazing. After every milking, she said, the Holsteins are turned out onto a new, ungrazed half-acre of grass.

In addition to the grazing, the cows go through about 200 tons of alfalfa hay from Idaho. Their organic grain ration is a parlor pre-mix that includes wheat, corn, barley, soymeal and a mineral pack, he said. Sometimes it includes flax and peas, depending on product availability.

Because the Styger farm is pasture-based, she said, it was fairly simple to become organic. They were certified organic in 2004 through the Washington State Department of Agriculture.

"We learned about organic treatment of calves, such as using aloe vera and garlic tincture instead of penicillin in case of pneumonia," she said.

All of the Stygers' milk goes to the co-op Organic Valley.

Two high-schoolers work part-time to help with the milking, but everything else falls to the Stygers.

"Like all small farmers, we do everything ourselves," Andy said. "That includes plumbing, carpentry, machine repairs -- the old-school way of doing it."

As the operation grew, Andy said, he had to buy bigger equipment than his parents had. "I had to find some old machines. Thirty-year-old equipment is easier to work on."

In addition to their milking cows, the Stygers have 75 to 80 young stock and have bought a Brown Swiss bull.

"We'll have about 30 crosses this fall," Linda said.

The animals lead pampered lives, she said. "We don't rush them into production. And spending all that time on pasture is good for them. We get 10 to 12 lactations (production years) from our cows."

The downside to being a small farm? "We can't buy in volume like the big guys can," Linda said. "And it's hard to find time to take a vacation, having to line up vet care and neighbors to help."

In the eyes of the state, though, there is no difference between a small dairy and a large one.

"All dairies are required to have a nutrient-management plan," said Jason Kelly, communications director with the Washington State Department of Agriculture. "Whatever size they are, they're subject to staff inspections of documentation and of the physical facility. That's on a 22-month cycle."

The nutrient-management plan is developed to standards adopted by the Natural Resources Conservation Service, he said. WSDA makes sure farmers follow the plan as drafted.

There may be one difference, he said.

"The nutrient-management plan for a small dairy would be significantly less involved," he said.