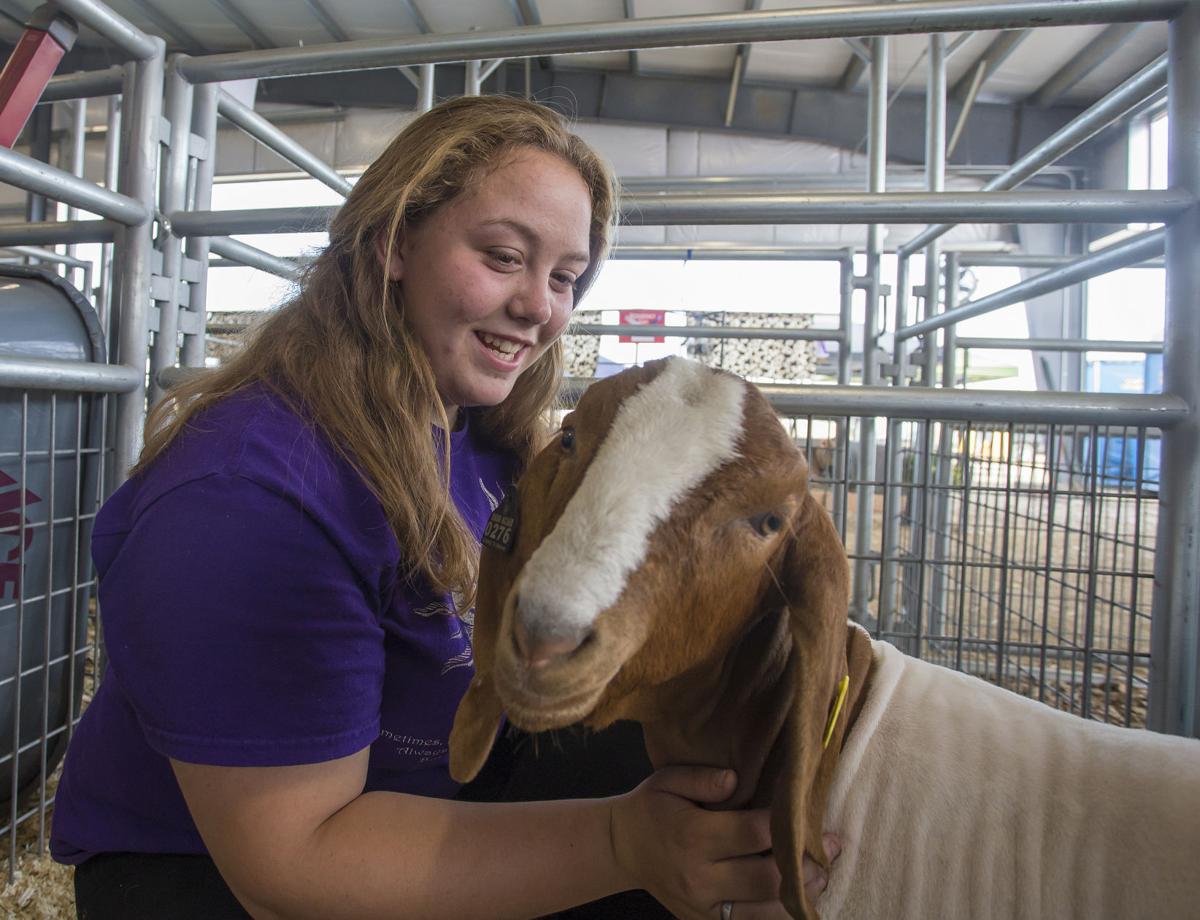 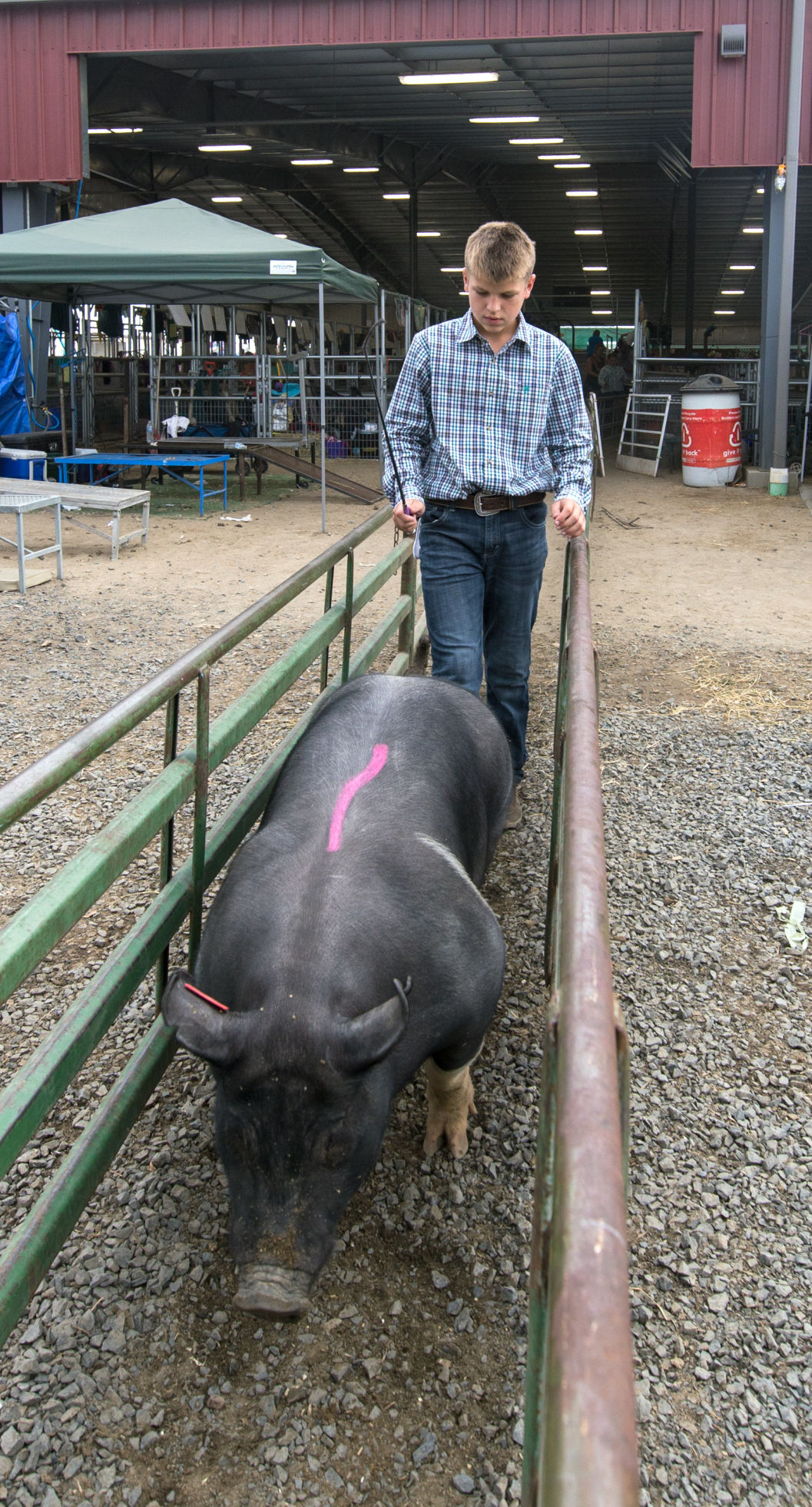 Blake Palzinski herds his pig down an alleyway on Saturday afternoon after auctioning off the animal at the Umatilla County Fair.

Blake Palzinski herds his pig down an alleyway on Saturday afternoon after auctioning off the animal at the Umatilla County Fair.

HERMISTON — As Annikah Perez waited to sell her 147-pound lamb at the Umatilla County Fair’s youth livestock auction on Saturday, her voice wavered as she described the good times she had with Tulip.

The sheep is stubborn, she said, “but that’s my favorite part about her.”

It was Annikah’s sixth year showing an animal at the fair, so she knew how hard it would be to say goodbye to the lamb she raised since birth. But she said she comes back year after year because she loves how much confidence she gains from the process.

Over the course of the hourslong auction in the largest barn at the fairgrounds, hundreds of thousands of dollars flowed from local businesses and individuals to area youths. Many of them plan to use the money for college, or to reinvest it into more animals next year.

The check comes at a price, however. Some of the animals sold at auction will be used for milk, for breeding or as a pet. But every kid who raises an animal for the fair also knows there is a good chance that the companion they fed and watered and walked for months is destined for someone’s dinner table.

Wyatt Harris, 11, from Echo, said the money he got from selling his sheep Smoke would go into his savings fund for college and a truck.

When asked whether he was worried about parting with Smoke, he shrugged.

“Not really,” he said. “I live on a farm so I kind of know what will happen.”

Macy Rosselle, 17, from Pendleton, was also pragmatic about what would happen to her grand champion goat Maverick, who sold for $12 a pound to United Grain Corporation.

“His purpose is for meat, and he will be fulfilling his purpose,” she said.

Still, it tugged at her heartstrings. Although Macy has 25 head of goats, Maverick was her award-winner she has traveled with to multiple fairs.

“He’s definitely my favorite goat by far,” she said. “I’m sad to see him go.”

Ayrin Davis 11, of Hermiston 4-H, had a harder time. She cried in the pens behind the auction arena after selling PJ, her backup lamb. She had already unexpectedly lost her primary lamb a week earlier when it got spooked by something and ran into a fence, breaking its neck.

Rapidash, she said, weighed much more than PJ and might have won grand champion.

“I cried for two and a half days,” she said.

The experience was part of the “circle of life” lessons that raising animals teaches youth who participate in 4-H and FFA.

Daytona Tracy, 16, said for some, that lesson is harder than others.

“You have to understand the process and know next year you’re going to get attached to another animal,” she said. “I know some kids are in it for the money, and then there are ones like me who get really attached.”

She said she tells herself each year that her animals are just going to a new home and “the worst is not going to happen.”

Her goat Rowdy went for $10.25 a pound to Nutrien Ag Solutions on Saturday. She put on a brave smile as she entered the ring with the 76-pound brown and white goat Saturday, but earlier in the week she got teary-eyed as she talked about their impending separation.

“He’s like my baby,” the Hermiston FFA student said. “When I first got him he wasn’t really tame at all so I had to hang out with him as much as possible. I would eat dinner with him.”

This year’s auction “smashed” the previous sales record for the fair, according to coordinator Marie Linnell. She said the sales gross was $610,000 compared with the 2015 record of $494,000.

In addition to bidding on animals, buyers can also choose to “bump” the check youths receive if their animal drew a price on the lower side. About 30 businesses participating in the UCF Bump program added an extra $28,000 to sales for more than 130 FFA and 4-H exhibitors.