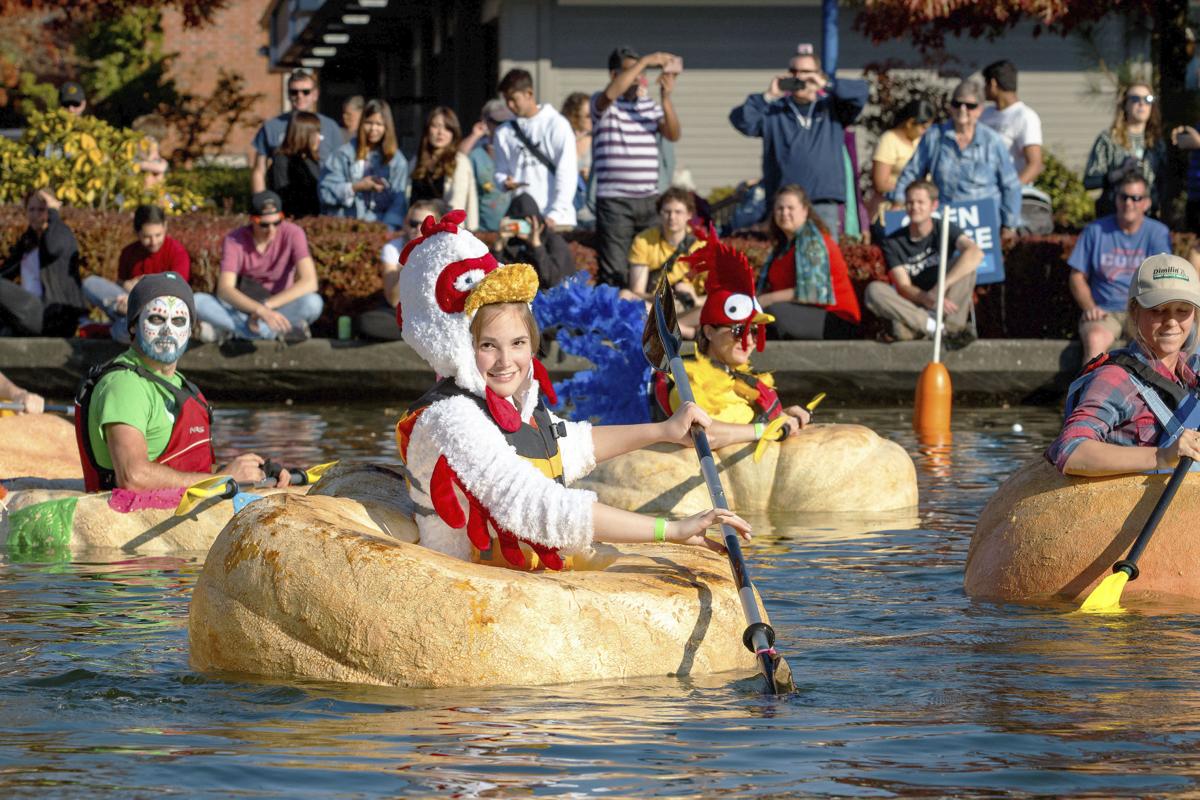 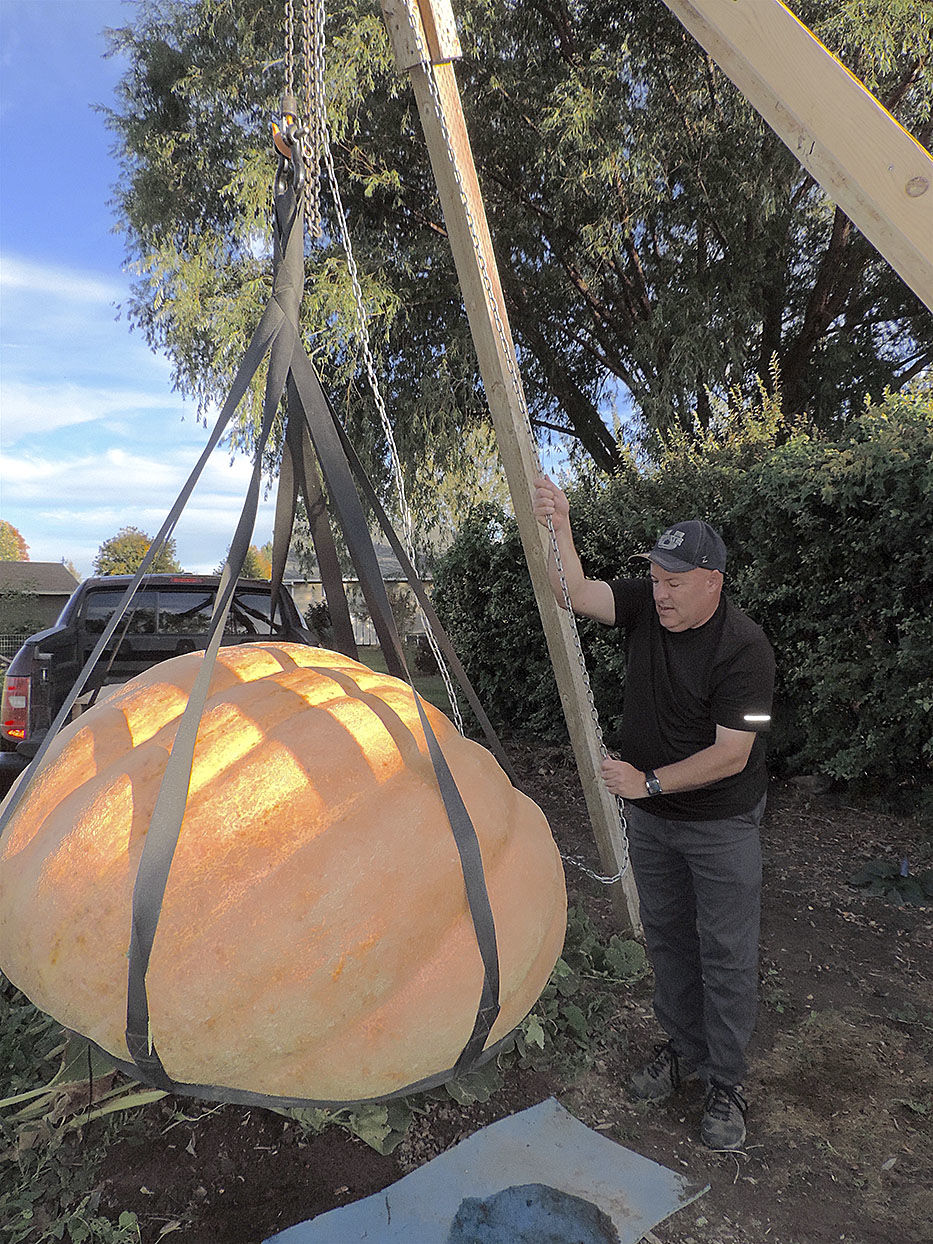 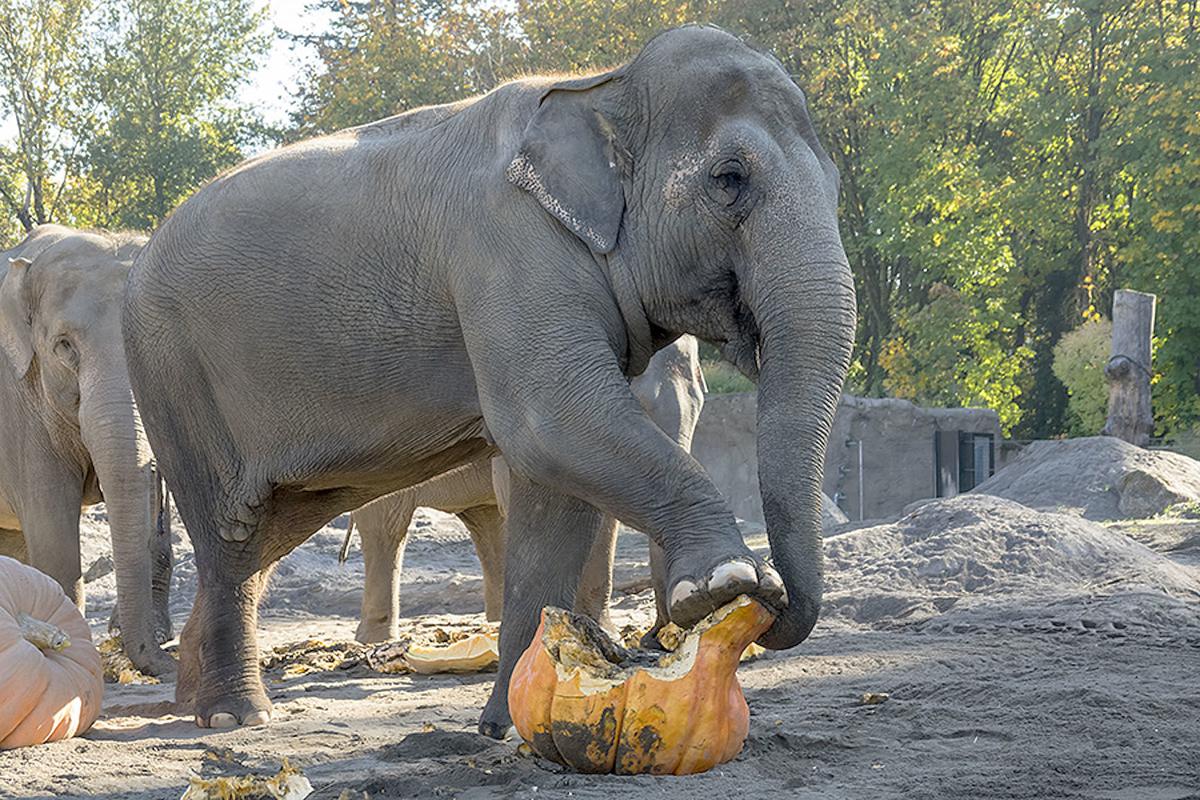 Elephants dine on giant pumpkins during the Squishing of the Squash Oct. 18 at the Oregon Zoo in Portland.

Elephants dine on giant pumpkins during the Squishing of the Squash Oct. 18 at the Oregon Zoo in Portland.

Long after harvest, no crop entertains in more ways than Atlantic Giant pumpkins.

Objects of curiosity at fairs and weigh-offs, they later become boats at regattas, canvasses for carvers and sculptors, and entrees for elephants. Cheering physics students even chuck them with catapults or drop them, posting videos on social media.

“Giant pumpkins make people smile for so many reasons,” said Cliff Warren, 54, a member of the Utah Giant Pumpkin Growers. An electrical engineer and avid gardener, he raises his prize-winning pumpkins in his garden near Pocatello, Idaho.

“They generate a sense of awe and are interesting to look at. Managers at car dealerships, banks and hospitals buy them as a talking point. You hear so many crazy theories about how they’re grown.”

No, they aren’t fertilized with milk. He uses specific amounts of fish emulsion, seaweed and soil acidifiers.

No, pies aren’t made from them because giant pumpkins lack flavor.

Yes, he moves them carefully with a sling and chain hoist.

At the Utah weigh-off in late September, his 611-pound pumpkin won seventh place. The winner tipped the scales at 1,608 pounds.

“I’m always happy to be in the top 10 there, especially this year with freezing temperatures in June,” he said. “I only had one that survived the weather. Some of my friends in Utah lost all theirs.”

After his sister gave him a book about Atlantic giants in 2000, Warren began raising prize-winners for the Utah weigh-off and the Eastern Idaho State Fair.

“They’re such a challenge to grow. You try to keep them between 50 and 85 degrees. Depending on the weather, you have to adjust how much you fertilize and water them.”

Like thousands of other members of giant pumpkin grower groups nationwide and worldwide, Warren is optimistic, meticulous and flexible — traits needed to raise pumpkins that grow as much as 20 pounds a day in summer.

“October is our prime time,” Warren said. “During the next three weekends most of the world’s pumpkins will be weighed.”

Nearly all the results will flow through two websites: www.bigpumpkins.com and the Utah growers’ Facebook page.

“Our Utah growers’ page has more than 1,100 followers, with many from around the world,” he said. “After weigh-offs, the entertainment begins with regattas, drops, surfing competitions, you name it. …”

Two of the West’s most popular events are the 16th annual West Coast Giant Pumpkin Regatta in Tualatin, Ore., and the 9th annual Ginormous Pumpkin Regatta on Oquirrh Lake south of Salt Lake City. Both events attract thousands of spectators.

Two years ago at Oquirrh Lake, Warren hollowed out his 992-pound pumpkin — saving the seeds to grow another ginormous weigh-off entry — donned his Yankees baseball cap and christened his entry the Yankee Clipper.

“It’s best to have a pumpkin with a fairly flat bottom because it’s easier to row than a round one,” he said.

Since 2004, the Pacific Northwest Giant Pumpkin Growers’ 50 to 90 members have been providing pumpkins for the regatta on Tualatin Lake at the Commons.

“We usually get 17 to 22 pumpkins each year,” said Heidi Marx, special event coordinator for the city’s Parks and Recreation Department. “We have 60 to 80 paddlers who dress up in costumes and take turns rowing in four to five races.”

This year, Warren will skip the Utah regatta. “I’m displaying my pumpkin in the front yard for the neighbors to enjoy.”

Warren said whatever his pumpkins weigh each year is fine.

“Every growing season, I like the anticipation and suspense of wondering how they’ll finally do on the scale,” he said. “There’s camaraderie among growers. We all like to see each other succeed and share seeds.”

In late November, he will harvest the seeds to grow more prize winners.

“Then we spread the pumpkins on the garden or use them for compost, so they feed next year’s giants.”