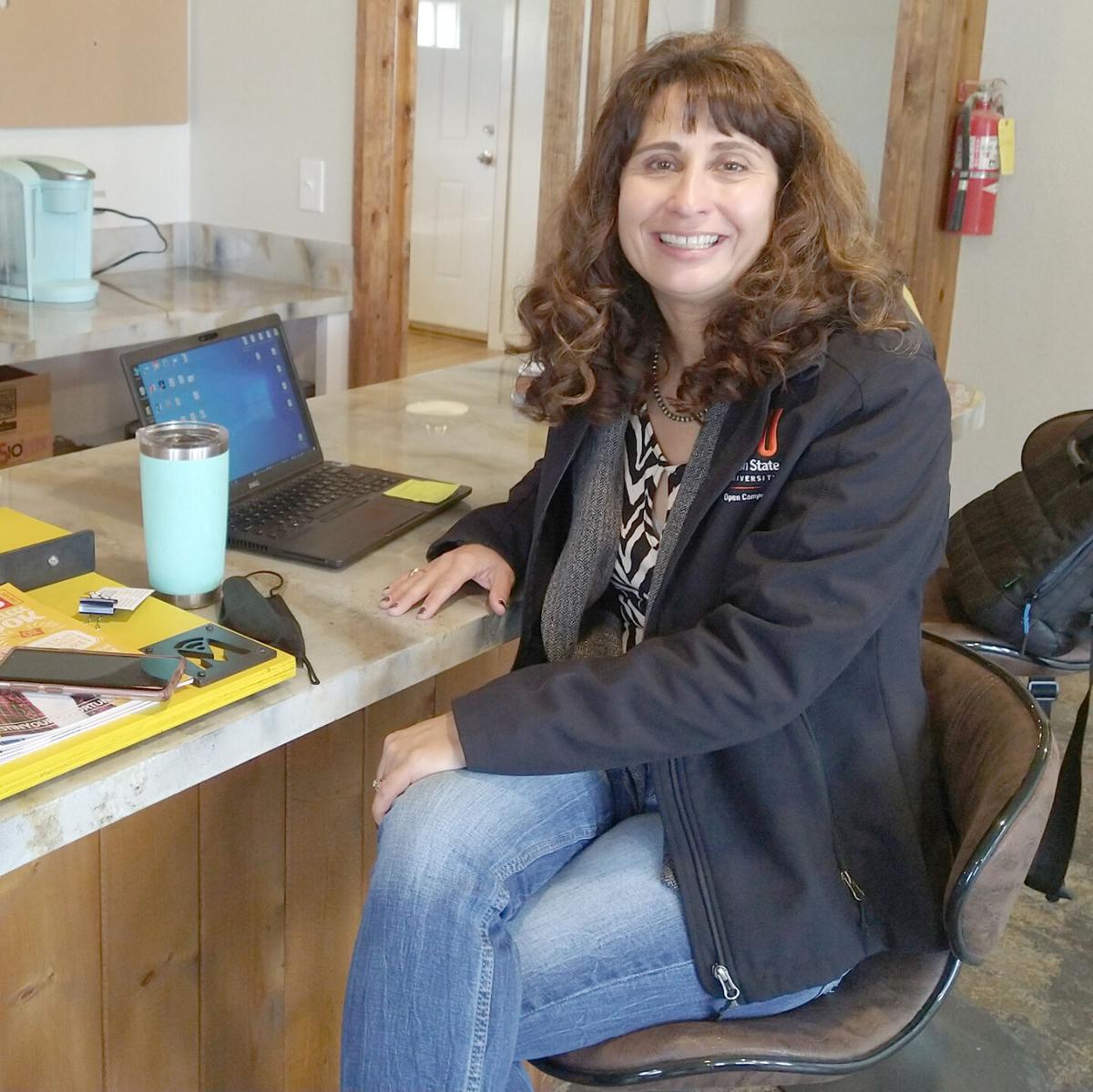 Didgette McCracken, one of the founding board members of Grant County Cyber Mill, sits in the nonprofit’s first location, which opened in Seneca, Ore., on Nov. 16. 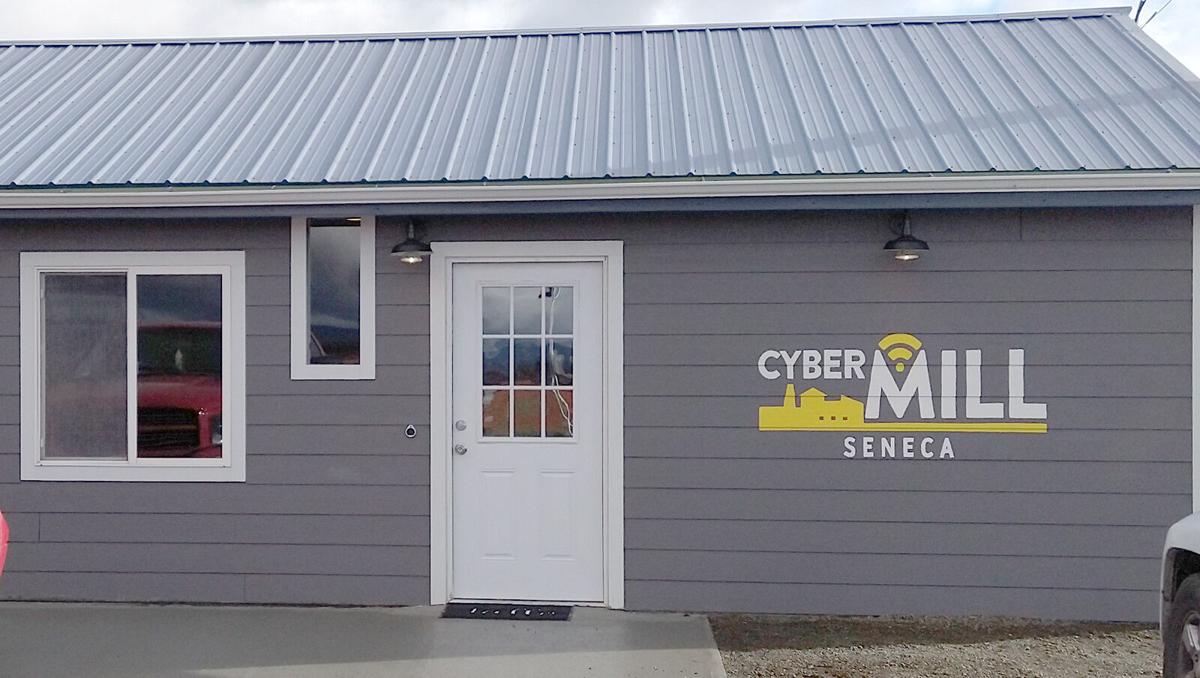 The Seneca, Ore., Cyber Mill opened on Nov. 16. Additional Cyber Mills are expected to open next year in Prairie City and John Day. 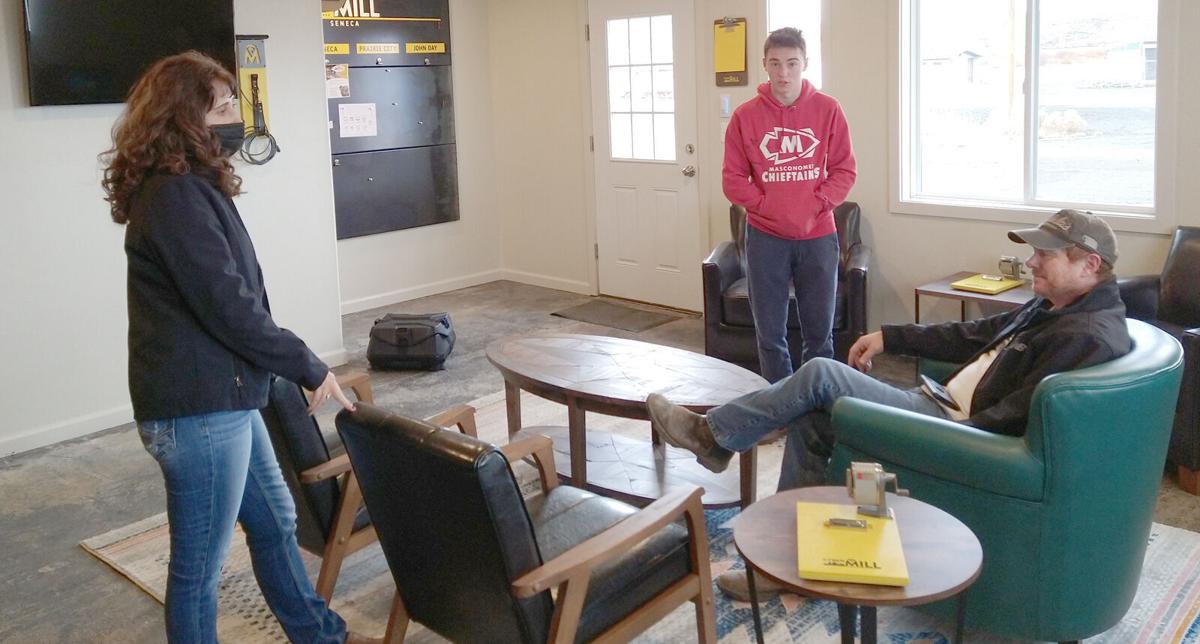 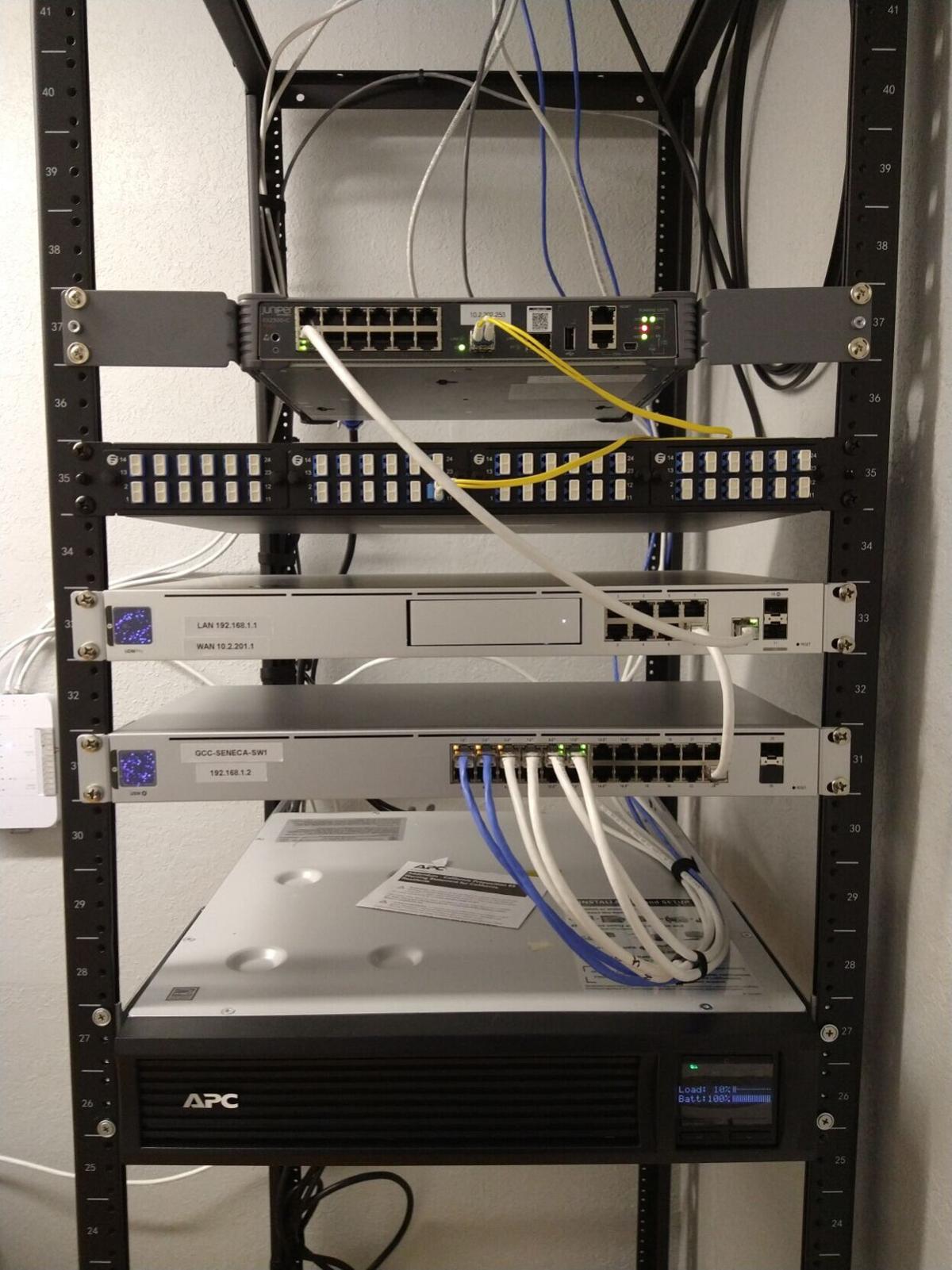 Didgette McCracken, one of the founding board members of Grant County Cyber Mill, sits in the nonprofit’s first location, which opened in Seneca, Ore., on Nov. 16.

The Seneca, Ore., Cyber Mill opened on Nov. 16. Additional Cyber Mills are expected to open next year in Prairie City and John Day.

SENECA, Ore. — When Logan Stanley moved to Seneca from Boise, she knew finding work would be a challenge. But with the arrival of the Cyber Mill, her options have expanded dramatically.

The nonprofit facility, which opened Nov. 16 in an 800-square-foot former restaurant building on Highway 395, is providing something that has been sorely lacking for many residents of this small Grant County ranching community: broadband internet access.

Stanley stopped by the Cyber Mill on Nov. 19 to check the place out and open a free account that comes with a code for the digital keypad for the front door, so she can access the building anytime between 5 a.m. and 10:30 p.m. She’s hoping the facility’s high-speed internet connection will allow her to parlay her political science degree into a good-paying job.

“I’m looking for remote work (and) this gives me access to find work outside the area,” Stanley said. “Having access to the internet is what opens the door to that opportunity.”

Stanley was just one of several local residents who came in Friday to see what the Cyber Mill was all about. Acting as host, tour guide and chief cheerleader was Didgette McCracken, a founding board member of Cyber Mill Grant County, the nonprofit behind the facility.

The project has been more than two years in the making, and McCracken couldn’t be more excited to see how the people of Seneca make use of it.

“It makes my heart happy,” she said.

It’s a big change for the tiny town of Seneca, population 165, but it’s also a sign of things to come for other isolated communities in this part of Eastern Oregon. Similar projects are already in the works for Prairie City and John Day, and long-range plans call for laying fiber-optic lines that could bring high-speed internet access to every community in Grant County.

Think of the Cyber Mill as an internet cafe without the cafe.

Just inside the front door is a living room-like space with small tables and comfortable chairs scattered around a Western-print throw rug and a large video monitor on one wall. On the other side of the room is a line of work tables with three desktop computers available for public use.

In the back of the building is a small meeting space, with a portable whiteboard and a wall-mounted monitor set up for videoconferencing. The room can be reserved in advance.

There’s also a handicapped-accessible restroom, a utility room for computer servers, and a strong Wi-Fi signal throughout the building for people who want to bring their own laptops, tablets or other wireless devices.

Working at a remote job is just one of the ways people will be able to use the facility, McCracken said.

The conference room can be booked for meetings, classes or even virtual doctor’s appointments.

Having access to a high-speed internet connection could also enable local artisans to sell their wares via online stores and empower entrepreneurs to launch all kinds of online businesses.

High school students can come in to do their homework or research a term paper, while older students can pursue a college degree through online coursework.

Or people can just come in to hang out, surf the net, watch a movie or connect with others for multiplayer online games.

And for now, at least, it’s all free.

McCracken said Grant County Cyber Mill hopes to keep it that way, but even if the nonprofit has to start charging a user fee at some point, she thinks the cost will remain affordable.

“We’ve run the numbers to see what it would take to become self-sustaining,” she said. “Once you’ve done the upfront costs, it’s very reasonable to operate. If we have to do that, we’ll do that, but we’ve also built in scholarships.”

Life on the frontier

While internet service is available through commercial sources in Seneca, it can be cost-prohibitive for some area residents. Others say their homes are too remote.

“This part of Oregon is considered frontier,” McCracken said. “A lot of people don’t really know what that means, but when it comes to broadband, there’s really not a lot of options.”

Layne and Janelle Jackson, who moved to Seneca from Boston with their son, Luke, said they’ve been frustrated by the lack of reliable internet service at their ranch seven miles from town. The Cyber Mill, they said, could make a big difference for them.

“It’s crazy how bad our internet is,” said Janelle. “We’ve been waiting for this for a long time.”

For now, the Seneca Cyber Mill is piggybacking on the broadband internet connection at Seneca Elementary School, which is tied into the Grant County Education Service District’s wireless internet network. Eventually, McCracken said, that will be replaced by an even more robust and reliable fiber optic cable.

Historically, rural areas have lagged behind big cities when it comes to the infrastructure required for high-speed internet access.

According to a 2020 report from the Oregon Broadband Advisory Council, 95% of the state’s population lives in areas with access to basic broadband service, but those people are concentrated in urban centers.

The report found that nearly half of the census blocks in Oregon lack even basic broadband access. As a result, only 46.1% of rural households subscribe to basic broadband or faster internet service, compared to 64.1% for their urban counterparts.

While some people still think of home internet service as a luxury, it is increasingly viewed as a necessity. COVID-19 only reinforced that view, as businesses suddenly found themselves forced to rely on remote workers and schools had to pivot to remote instruction.

Even before the pandemic, however, there were widespread calls to bridge the digital divide, not only for low-income households who lacked the means to connect to the net but also for residents of rural communities that lacked the infrastructure to access broadband service.

In 2018, Congress appropriated $600 million for the USDA’s ReConnect Program, which aims to expand broadband infrastructure and services in rural America through grants and loans.

Last year, the Oregon Legislature funneled $10 million from its share of federal COVID relief payments into the Rural Broadband Capacity Program, which awards grants to support infrastructure construction and related projects in unserved or underserved areas of the state.

Private foundations, recognizing the need, have gotten into the act as well.

Some of that money is fueling the push for expanding broadband internet service in Grant County.

In addition to private donations, McCracken said, the primary funding sources for the Seneca Cyber Mill were the Roundhouse Foundation, the Oregon Community Foundation and the Grant County Digital Network Coalition.

Grant County Digital, as it’s known for short, is a government consortium involving Grant County and the cities of Seneca, Prairie City and John Day. The group is currently funded by a $1.8 million state grant with the goal of increasing access to high-speed internet service throughout the county.

“They should be starting construction in the very near term,” Grant County Digital Chair Josh Walker said. “They plan to be built out to Long Creek and Monument and down to Seneca in 2022.”

Walker said Grant County Digital is keeping an eye out for additional funding and could get involved in additional projects that support its mission of bringing broadband internet access within reach of all Grant County residents.

“It opens up the opportunity for folks to move here and make a living here by being able to work remotely,” Walker said. “To keep up with the more urban areas and compete with them, we need to be able to do that.”

The next year should be a busy one for Grant County Cyber Mill. Now that the Seneca location is up and running, McCracken said, the group is turning its sights on opening similar facilities in Prairie City and John Day before the end of 2022.

Both new Cyber Mills will offer all the same basic services as the one in Seneca, she added, but each will have its own personality.

“Every community has its own needs,” McCracken said.

“While we want this sort of idea everywhere, we know the amenities are going to look different in every place.”

Grant County Cyber Mill is currently raising funds to complete both projects and is nearing its goal for the Prairie City site. The John Day Cyber Mill will be a bigger lift because it will require a lot more remodeling, McCracken said, but between private donations and funding from Grant County Digital, both projects are more than halfway to meeting their fundraising targets.

As Ortelco’s fiber optic project progresses, McCracken said, there could be opportunities to set up Cyber Mills in other Grant County communities.

Eventually, she’d like to see the Cyber Mill model replicated in isolated rural areas far beyond the county line. She’s already had conversations with Harney County and the city of Condon, and she doesn’t see any reason why it couldn’t work elsewhere as well.

“We want to showcase this to other communities and say, ‘You can do this.’”

NEXT STEPS: The Grant County Digital Network Coalition is raising funds to open Cyber Mill locations in Prairie City and John Day. To contribute or find out more, contact Didgette McCracken at 541-620-1465 or didgette.mccracken@oregonstate.edu.