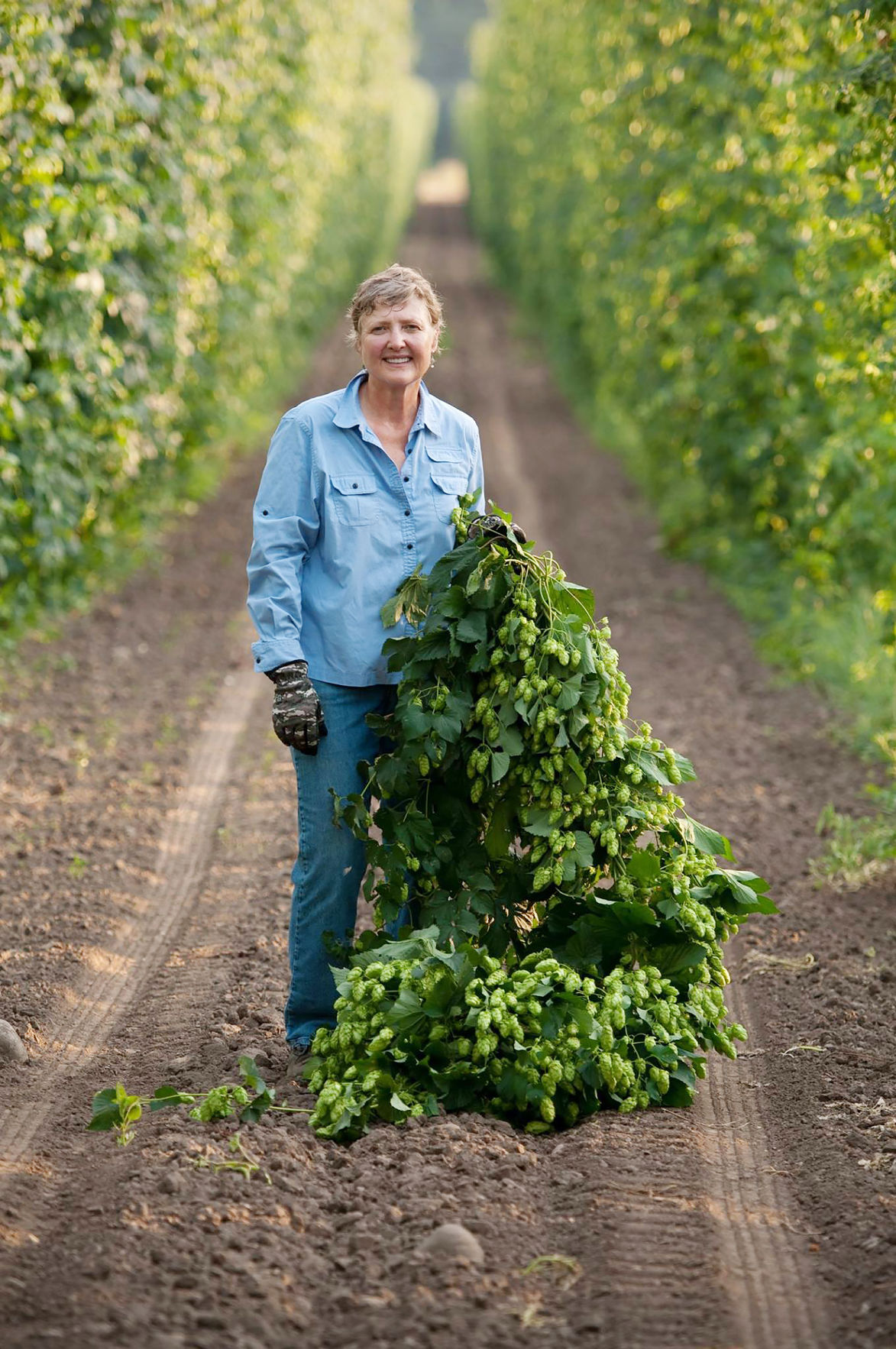 Gayle Goschie in her hop yard. Her farm uses glyphosate and cover cropping to control weeds. 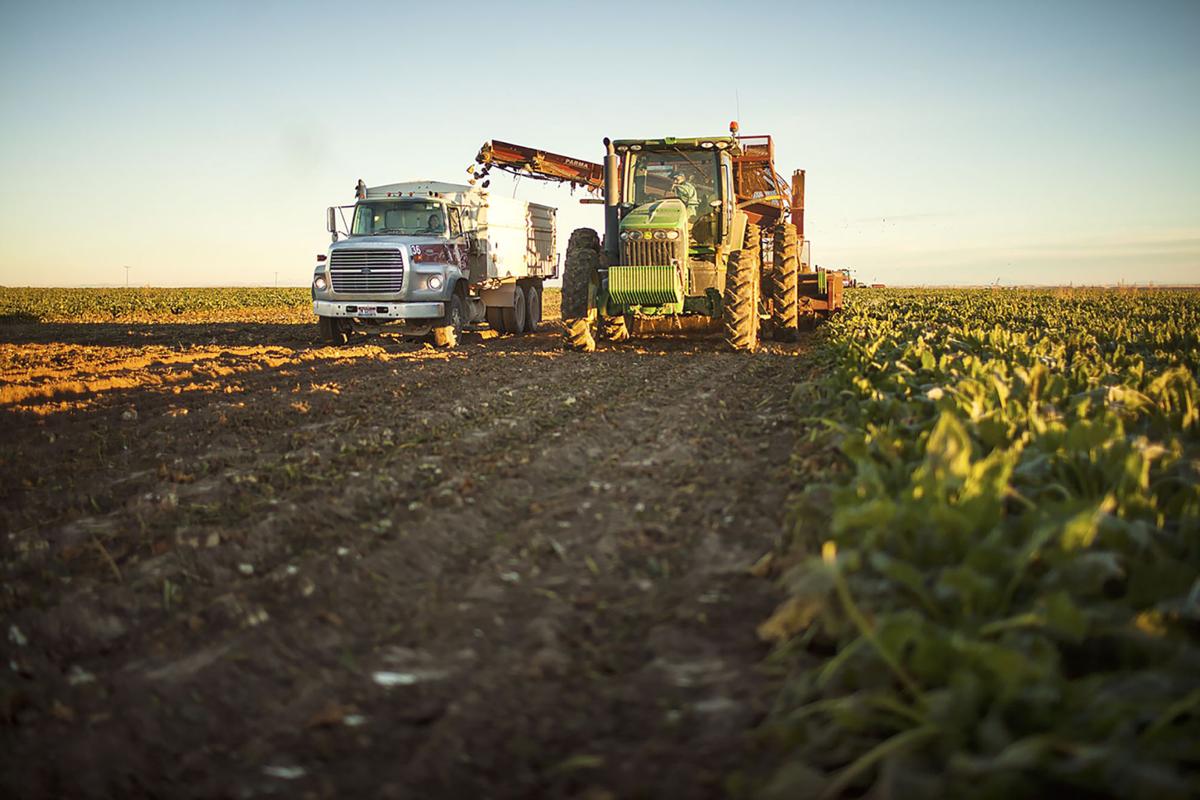 A sugar beet field during harvest at Grant 4-D Farms. 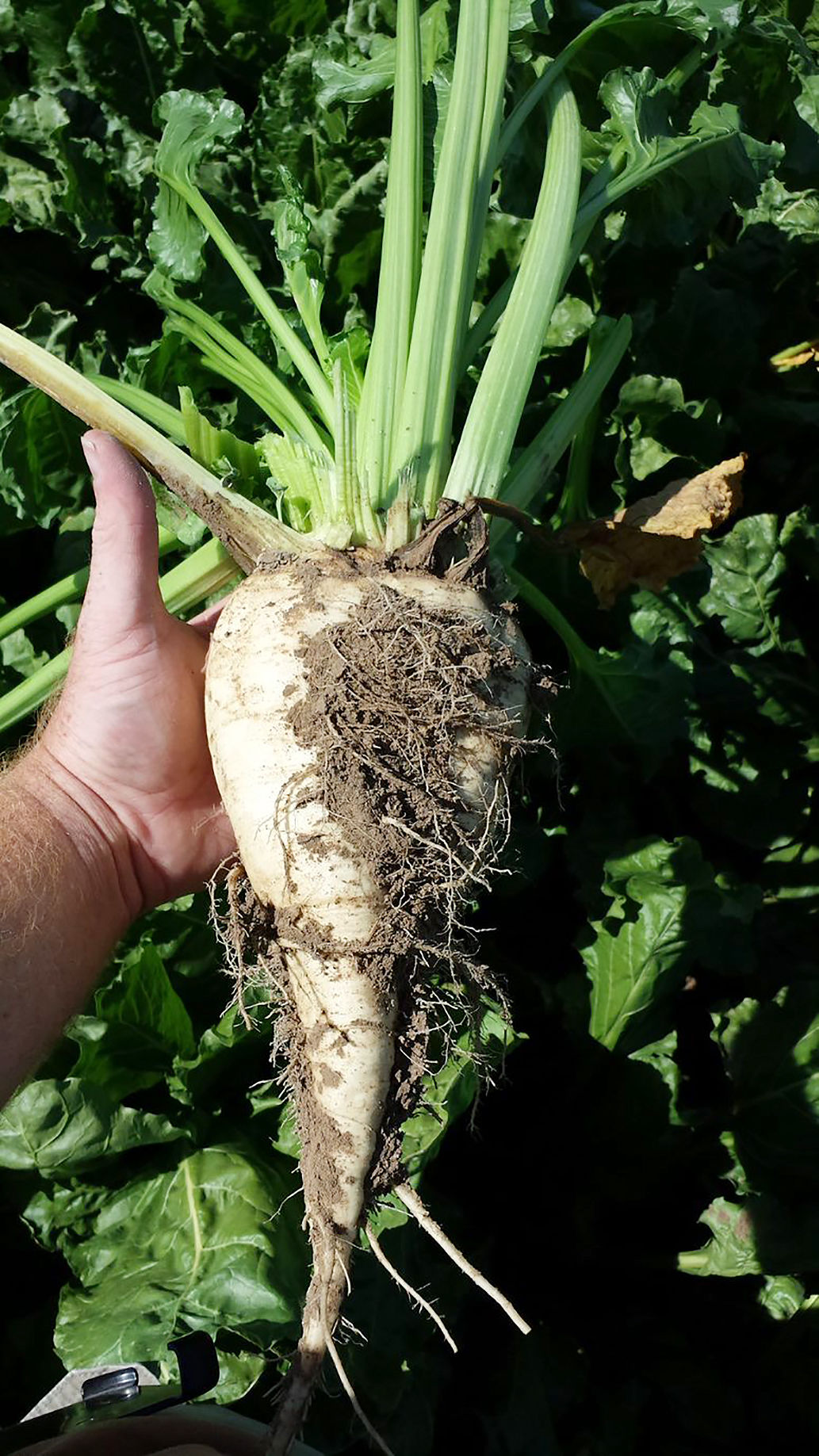 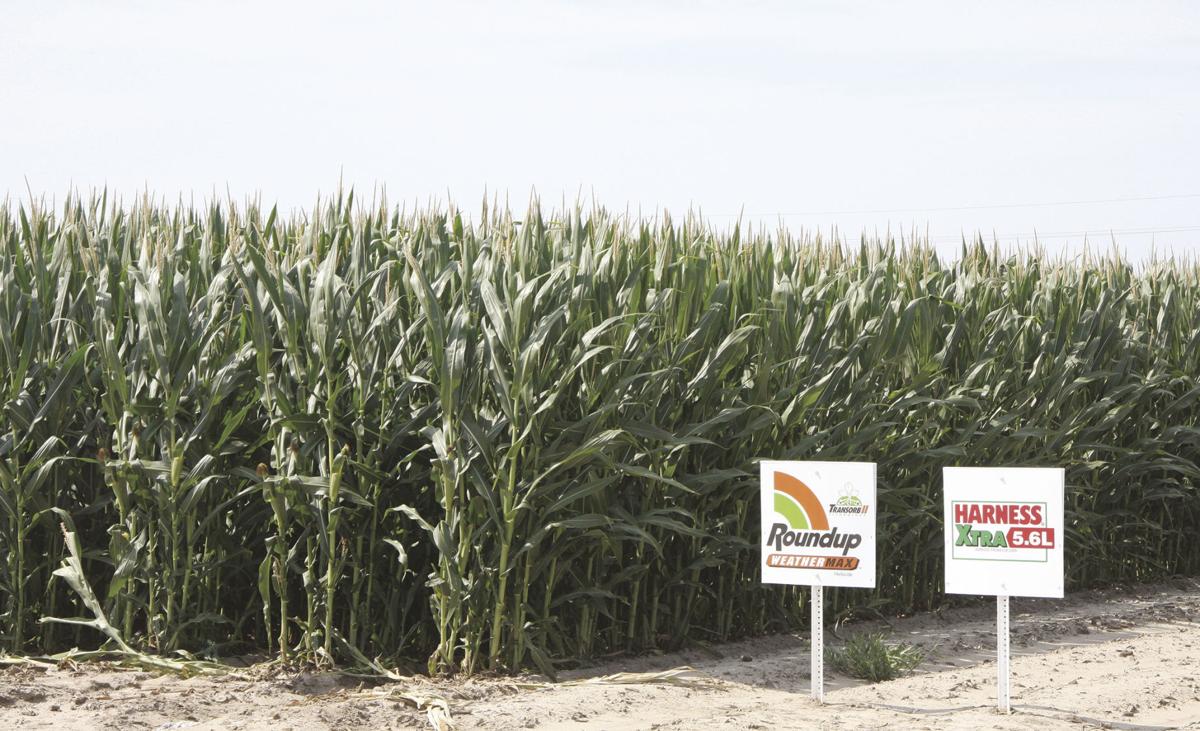 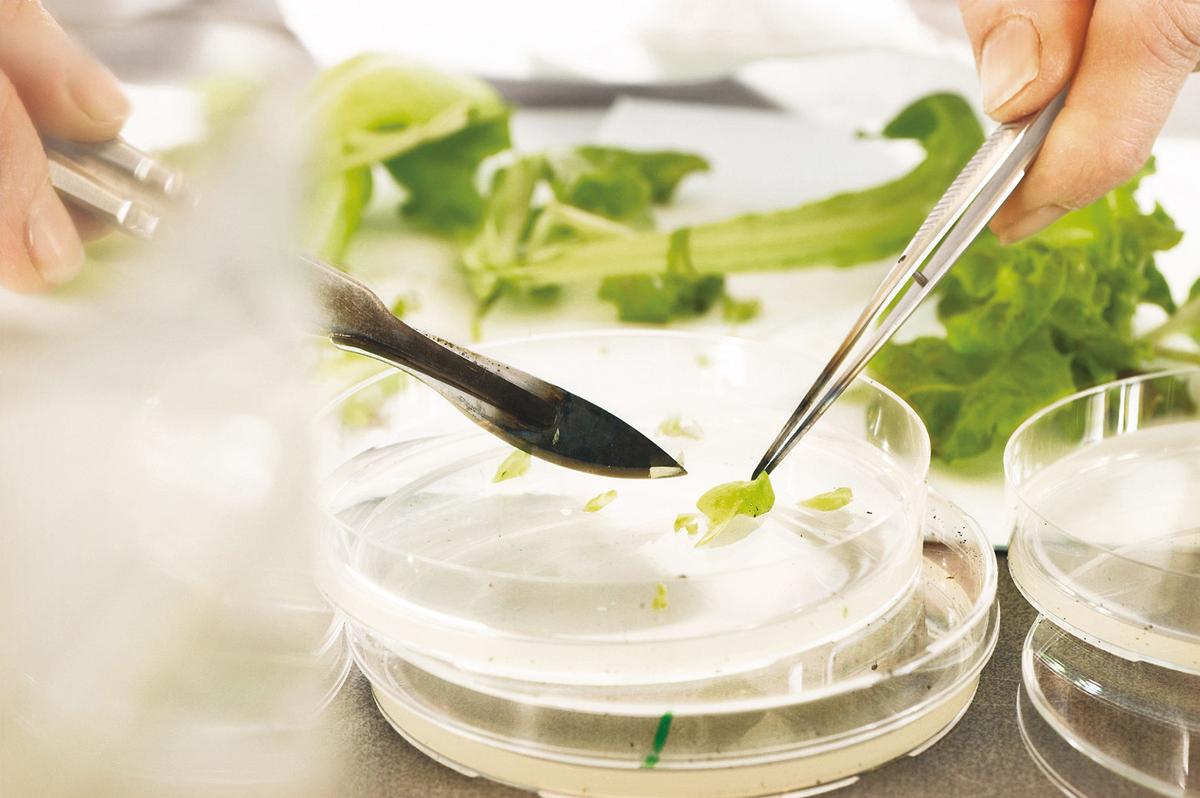 Plant samples are prepared in the laboratory for tests. 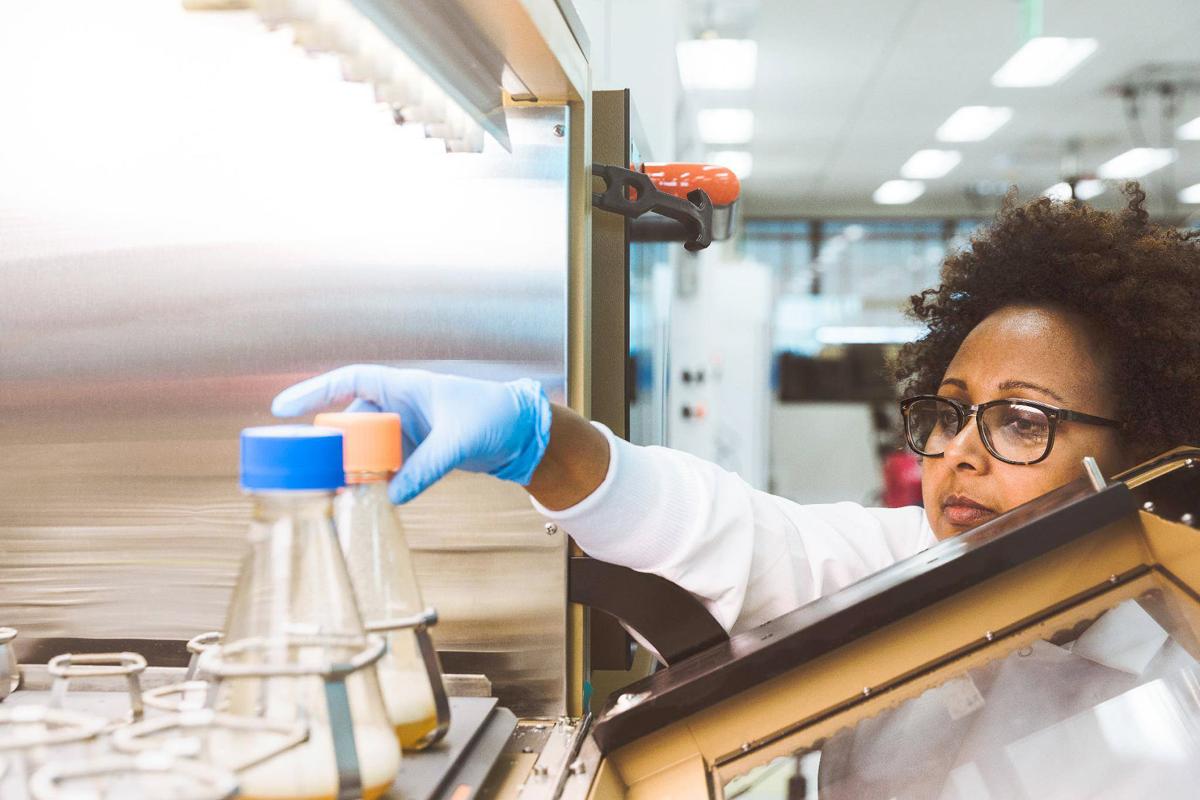 Laboratory work at Bayer. The company estimates its new herbicide will be on the market by the end of the decade.

Gayle Goschie in her hop yard. Her farm uses glyphosate and cover cropping to control weeds.

A sugar beet field during harvest at Grant 4-D Farms.

Plant samples are prepared in the laboratory for tests.

Laboratory work at Bayer. The company estimates its new herbicide will be on the market by the end of the decade.

Besieged by lawsuits and a rising tide of weeds resistant to its popular Roundup herbicide, German chemical giant Bayer is touting a landmark discovery — a molecule that will kill resistant weeds using a different mode of action.

“Mode of action” describes precisely where and how an herbicide kills a weed at the tissue or cellular level: for example, by interrupting a weed’s growth.

“We’re super excited by the breakthrough we think we’ve made,” said Bob Reiter, head of research and development in Bayer’s crop science division.

R&D takes time, and Axel Trautwein, a molecular scientist at Bayer, said a decade may pass before a new product reaches the marketplace.

But many farmers are already enthusiastic.

“I’m excited about this,” said Randy Grant, grower and president of the Idaho Sugarbeet Growers Association. “We need more tools in our toolbox.”

The discovery comes after a nearly 30-year drought in development of new herbicides, and experts say Bayer’s innovation will have profound impacts on farming. But many growers and researchers worry the new “tool” won’t be enough by itself to combat the populations of herbicide-resistant weeds taking hold on more than half of U.S. farms.

Resistance is part of a weed’s basic biological struggle for survival. When a field of weeds is sprayed again and again with a single herbicide, that herbicide kills weaker individual plants, but some naturally strong weeds have random traits that allow them to survive the herbicide. These survivors reproduce, passing on resistant traits to the next generations.

Weeds are not the only pests whose populations evolve to resist pesticides. Parasites do it. Mosquitoes do it. Even bed bugs do it.

Growers now grapple with so-called “superweeds” present on hundreds of millions of acres across the U.S., according Stratus Ag Research.

The Washington Grain Commission estimates herbicide-resistant weeds across all crops increase growers’ costs on average 30% to 40% per acre. In U.S. corn and soybeans alone, researchers estimate uncontrolled weeds amount to more than $43 billion in annual losses.

The Goschies are known for their hops and wine grapes, but they also grow grass seed, corn and wheat. Local researchers recognize the farm for its use of cover crops to help suppress weeds.

But even with such crop management, said Goschie, her use of glyphosate, the molecule behind Roundup, has led to patches of resistant weeds that refuse to die.

“With some variation, we’re still relying on glyphosate,” said Goschie. “I kind of want to kick myself, because for 20 years we’ve made sure we didn’t burn out any particular fungicide or insecticide. But there was something about glyphosate — just walking to the shelf, knowing you had this herbicide that would do what it’s always done. I don’t know why we didn’t think about the fact that it would lead to resistant weeds the same way.”

Researchers say glyphosate’s rise to ubiquity led to resistant weeds springing up to withstand it.

We don’t know its name; Bayer has not yet released that.

The herbicide, said Trautwein, is in R&D phase two: human and environmental studies, development of manufacturing routes and field trials. The next step will be navigating government regulators.

Reiter, the R&D head, said the molecule will provide post-emergent broadleaf control, attacking weeds after they show themselves. He predicts the herbicide will control tough grasses.

In a February conference call, some investors, including PJ Juvekar of Citigroup, expressed concern Bayer’s new herbicide might lead to further weed resistance.

“Clearly, you’re trying to stay one step ahead of this resistance,” he said. “So how do you balance that staying ahead versus weeds developing resistance to different herbicides?”

“First of all, obviously in some ways it can be a race,” he answered, “but it’s also an opportunity.”

The new herbicide is part of Bayer’s broader commitment to invest $5.4 billion in finding new methods of weed control during the 2020s.

And Bayer doesn’t plan to stop with an herbicide.

“In almost all of our seeds, we have the trait for glyphosate resistance,” said Liam Condon, president of Bayer’s crop science division.

One example is Roundup Ready crops, which reduce crop damage when herbicides are sprayed, make weeds easier to manage, streamline labor and even diminish the need for tillage, according to the Department of Chemistry at Harvard University.

Bayer says its plant biotech team is already engineering crops to go along with the new mode of action.

‘Model T to a Tesla’

The first synthetic herbicide was discovered in the 1940s. Franck Dayan, professor of weed science at Colorado State University, called it “a paradigm shift” in agriculture.

Scientists discovered new modes of action every few years through the 1980s. That changed with the introduction of glyphosate-resistant crops.

Roundup, paired with glyphosate-resistant crops, was so effective it overwhelmed most competition, contributing to the lapse in herbicide research, said Dayan.

According to the EPA, about 280 million pounds of glyphosate are used in the U.S. annually — three times more than all other pesticides.

“Going from previous herbicides to glyphosate was like going from a Model T to a Tesla,” said Duane Grant, a sugar beet grower with operations in Rupert, Idaho, and Ontario, Ore. He is no relation to Randy Grant.

“There was little incentive for companies to compete,” said Dayan.

Dayan said more stringent regulations and the higher costs of developing an herbicide — from $184 million in 2000 to more than $300 million today — have also erected an expensive barrier to research.

And consolidation within the agrochemical industry has led to fewer companies doing that research. For example, in 2018, Bayer acquired Monsanto for $63 billion.

As glyphosate-resistant weeds evolved, it opened the door for other companies to market their products to be used in rotation or mixed with Roundup. Now Bayer is stepping up its own R&D.

Bayer — and Monsanto before it — have a complex legal history.

And Roundup has had its day in court — well, many days.

The company is currently facing more than 20,000 lawsuits claiming the weed-killer causes a cancer called non-Hodgkin’s lymphoma. Bayer has lost the first three cases, which resulted in multimillion-dollar verdicts. These are on appeal.

In mid-March, Bayer reached draft settlement terms with multiple law firms representing a substantial share of the plaintiffs. The parties were discussing a roughly $10 billion settlement, but a Bayer spokesperson Charla Lord said the COVID-19 outbreak has stalled negotiations. The outcome remains uncertain.

The EPA has backed Bayer, endorsing glyphosate, the active ingredient in Roundup, as “safe” in independent assessments. The European Food Safety Authority and Germany’s Federal Institute for Risk Assessment have also concluded glyphosate is not carcinogenic. Numerous scientists, including Dayan, agree.

But people on both sides of the debate have said they’re uneasy about the way Bayer’s research gets vetted.

Court documents containing emails and text messages reveal that between 2015 and 2017, Monsanto executives disrupted peer-reviewed research processes and collaborated with academics to push their message.

Some researchers also say Bayer and the EPA — regulated and regulator — are too close for comfort.

“They’re really chummy,” said Nathan Donley, senior scientist at the Center for Biological Diversity, an environmental nonprofit that filed an amicus brief on behalf of a cancer patient claiming damage from Roundup. “There’s a level of familiarity that’s unprofessional.”

Some researchers say Bayer’s lawsuits have pulled attention away from the herbicide-resistant weeds that continue to multiply.

“With the way we use herbicides, even if we introduce a new one, it’s just a matter of time before resistance evolves,” said Gina Nichols, a Ph.D. candidate at Iowa State University who researches weed control. “I firmly believe we should be pursuing integrated weed management.”

Nichols said she likes to think of weed suppressing methods such as crop rotation and cover cropping as non-chemical modes of action.

Crop rotation is common, but cover cropping is more unusual.

“The benefits of cover crops are widely touted, but in the real world of farming, it is often challenging to work cover crops into your rotation,” said Nick Andrews of Oregon State University’s Extension Service.

Andrews said cover crops can be expensive, time-consuming and can even backfire.

“Pest relationships are complex and very site-specific,” he said.

One example of a cover crop backfiring comes from the sugar beet industry.

Duane Grant, who is also CEO of Grant 4-D Farms in Rupert, Idaho, and grows for Amalgamated Sugar Co., recalls an incident last year in which sugar beet farmers in Treasure Valley planted cover crops to enrich humus, only to find those crops acted as hosts for nematodes, roundworms that kill sugar beets.

“You’ve got to understand what you’re trying to do to the soil,” he said.

“We just don’t think we know enough about cover crops to safely experiment yet,” he said.

Practical Farmers of Iowa, a farm peer-support organization, pairs farmers interested in using cover crops with other farmers who are experienced. Nichols said she hopes similar programs pop up across the U.S. In the meantime, she encourages farmers to talk with extension and cooperative agents to find weed control solutions.

Some farmers have jumped onboard, even participating in field trials. Researchers at the University of California-Davis are experimenting with cover crop mixtures in almond orchards, where growers face resistance evolving in ryegrass, hairy fleabane, horseweed and jungle rice.

With an uncertain future for Bayer’s innovations and a clear proliferation of superweeds, many farmers say they’re determined to improve their weed management programs.

In Silverton, the Goschies say they are eager to combat resistant weeds more holistically.

It’s springtime. In the vineyards, under tangled vines, a great green carpet of ryegrass mingled with clover smothers weeds and steals their sunshine. The permanent covering requires mowing only two or three times a season.

Among the hops, in late summer or early fall, the Goschies will plant their annual cover crop — a legume, such as peas, with a spring grain.

“Fighting weeds can be challenging,” said Goschie. “We’ve got a lot of experimenting, fine-tuning to do. I’m thankful for the great support base we have of public researchers. We’re getting better at cover cropping. And farming, you know — hard as it is — it’s really beautiful.”