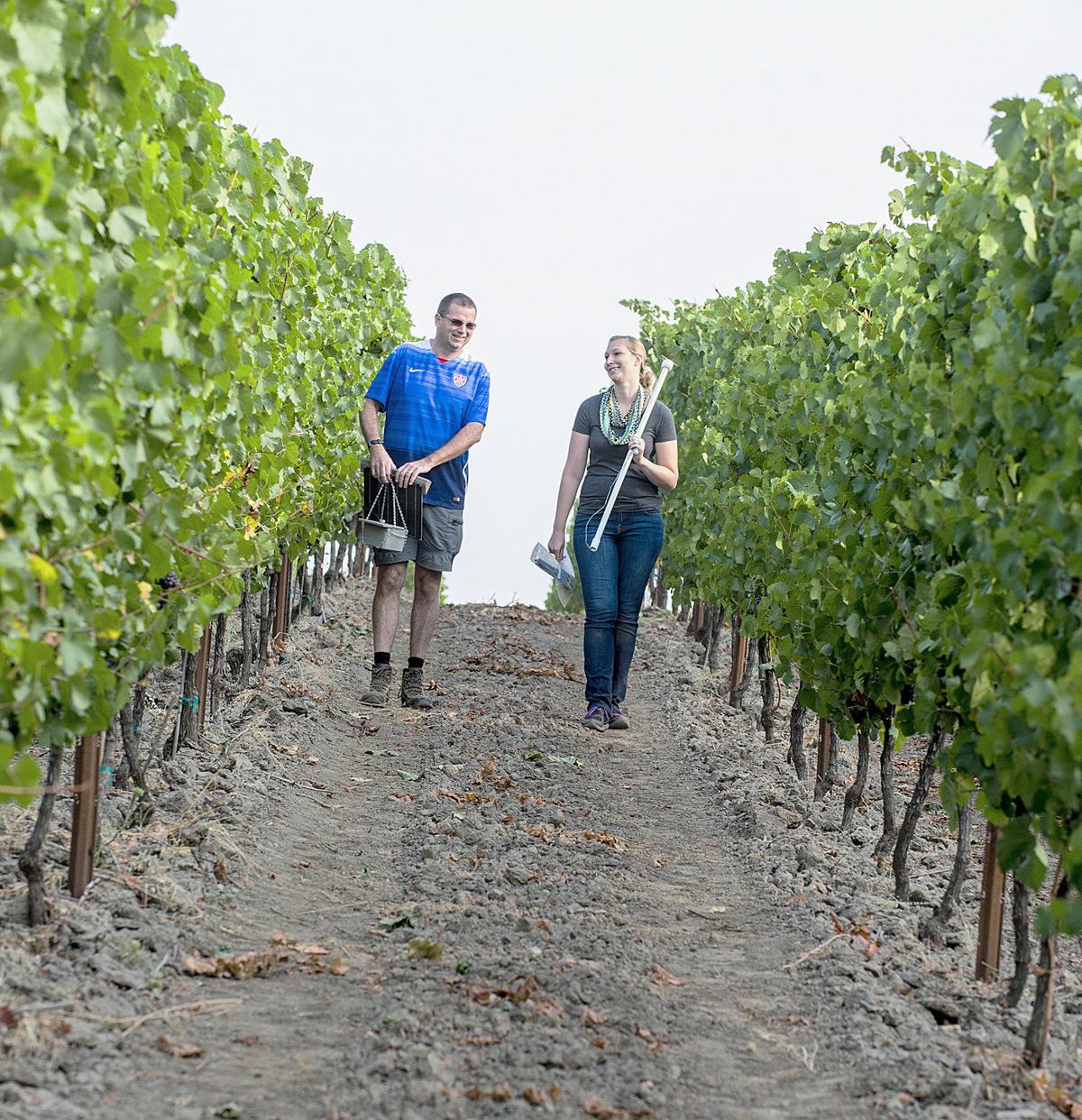 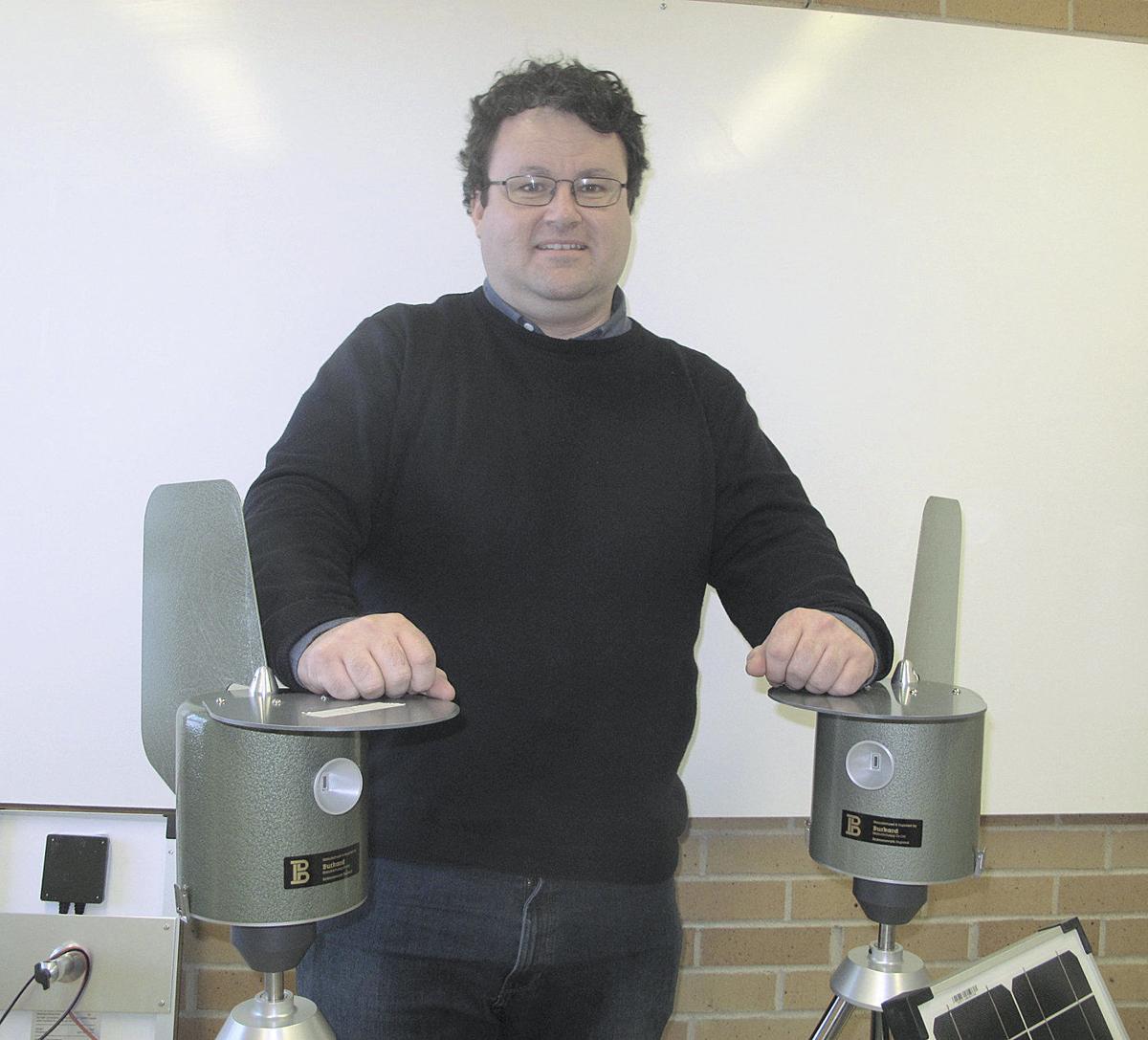 University of Idaho plant pathologist James Woodhall with two of the spore sampling machines he will use this summer to research how the detection of spores may give growers advanced warning of crop diseases. 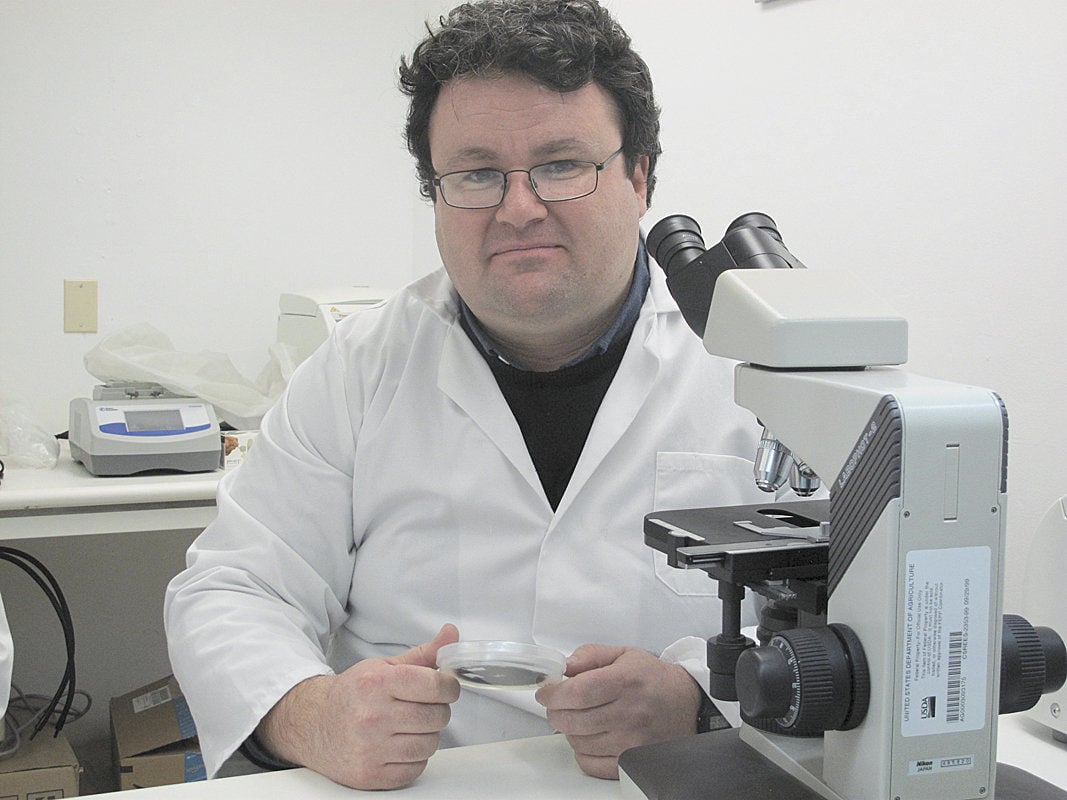 University of Idaho plant pathologist James Woodhall examines a culture in his laboratory at the Parma Research and Extension Center. Woodhall is developing new tests for crop diseases and plans to set up a network of spore samplers to detect spores that spread harmful diseases.

University of Idaho plant pathologist James Woodhall with two of the spore sampling machines he will use this summer to research how the detection of spores may give growers advanced warning of crop diseases.

University of Idaho plant pathologist James Woodhall examines a culture in his laboratory at the Parma Research and Extension Center. Woodhall is developing new tests for crop diseases and plans to set up a network of spore samplers to detect spores that spread harmful diseases.

PARMA, Idaho — Change is in the air for farmers who battle wind-borne diseases that attack their crops, costing them millions of dollars each year in lost production and added expenses.

Woodhall, who works for the University of Idaho Extension, believes the data he collects will provide growers with the information they need to treat for crop diseases even before symptoms surface, saving them a fortune in chemical applications and improving disease control.

“We’re currently spraying with little or no knowledge of if spores are in the air,” Woodhall said. “They’ll spray based on historical occurrence, but things vary year to year.”

With industry support, he hopes to grow the network of spore samplers in the coming years to give farmers in each region a more comprehensive look at the threats that are blowing in the wind.

Woodhall, a native of England who has been at UI about a year, believes the variety of diseases he plans to target will set his work apart from other research projects using spore samplers. Plans are already in the works to use spore samplers for early detection of diseases that attack potatoes, barley, wheat, sugar beets, beans, onions, oilseeds, grapes and hops.

A spore sampler is similar to a vacuum cleaner, sucking in air and capturing spores in a vial. Airborne spores can spread many diseases from infected plants, which are often far away.

The spore DNA is then extracted and identified using an advanced diagnostic technique called real-time polymerase chain reaction, or PCR. The instrument amplifies DNA segments, which carry the disease’s genetic code, so it can be identified.

Once the disease is identified, farmers can attack it using sprays or other methods before it even appears in their crops.

Woodhall plans to start sampling at the Parma, Kimberly and Aberdeen research and extension centers and said more real-time PCR testing instruments will have to be purchased as the network grows.

In their initial research, Woodhall and his colleagues will evaluate the timing, density and conditions under which pathogens are confirmed through spore sampling and correlate the data with disease prevalence in nearby fields.

“The time is right to use this technology,” Woodhall said. “We can really provide some solutions to the issues farmers are facing.”

Only when cereal diseases such as Fusarium headblight and stripe rust appear and start to damage crops can Marshall send “pest alerts” to farmers.

But she knows those diseases may incubate for weeks before the first symptoms appear. That’s why she’s requested funding from Idaho’s wheat and barley commissions to collaborate on Woodhall’s spore sampling project. Her plan is to correlate wind-borne spore loads captured by spore samplers with the infection rates of different barley and wheat varieties.

“We need to validate the data in environmental conditions to develop a predictive model for our growers,” Marshall said. “We have to have proof that what we’re seeing is the threshold to spray.”

Marshall said malting companies have no tolerance for barley with the don toxin, which is produced by headblight, and some varieties of winter wheat are so susceptible to stripe rust that infection can be widespread from the moment it’s detected using normal means.

“A lot of it is reactive diagnosis. Somebody has got a problem and we diagnose what it is and help control it,” Woodhall added. “My research is trying to stop that and try to do preventative diagnosis.”

Jeff Miller, president and CEO of Rupert, Idaho-based Miller Research, also sees the potential for spore samplers to save growers money on fungicide applications for late blight, a destructive fungal pathogen. He explained that growers sometimes spray for the disease when cool and wet conditions surface that favor it, but the pathogen may not even be present.

Miller also said spore samplers could miss late blight if they’re not in the right location. He’d be interested in testing a spore sampler to gauge its usefulness in early detection of late blight.

Miller said older-model spore samplers that capture spores on tape for visual diagnosis have been used to survey for early blight, but that disease proved to be so ubiquitous that spraying at a certain time of year became the best precaution.

The onion industry contributed one of the spore samplers that will be used in a research project funded with $125,000 from USDA’s Specialty Crop Research Initiative. It focuses on Fusarium proliferatum, a fungal pathogen that causes bulb rot. UI plant pathologist Brenda Schroeder, a collaborator in the project, explained the disease first surfaced as a threat to stored Pacific Northwest onions in 2014 and 2015. Bulbs from the 2016 season have not shown rot.

Schroeder’s work will determine how temperature impacts the pathogen. The researchers will also investigate sources of the pathogen. Woodhall will use his spore samplers to test if corn is a host and contributes to the problem, and to better understand the relationship between airborne spore loads and infection.

Grape growers in Oregon’s Willamette Valley typically spray their vines for powdery mildew at one- to two-week intervals, depending on disease pressure in the field.

A few growers in the region, however, significantly reduced their fungicide applications in 2016 without repercussions, thanks to a network of spore samplers deployed by Amy Peetz of Revolution Crop Consultants of Albany, Ore.

“Where this science comes in spectacularly is it takes seven to 10 days for spores to germinate and signs of disease to become visible,” Peetz explained. “This gives growers a seven- to 10-day jump on protecting plants against disease.”

“Over the last eight to nine years that we’ve tested it out in the field, the (grape) growers have saved somewhere between two and four applications per year,” Mahaffee said, adding that the Oregon Wine Board estimates spore sampling saves growers $1 million to $2 million annually.

Mahaffee believes the technology is just now coming of age on a broader scale, but it won’t be effective in every situation.

“It’s hard to say where it will and won’t be useful,” Mahaffee said. “There’s a lot that has to go into considering the utility of an approach like this.”

Rubella Goswami, a plant pathologist with the National Plant Diagnostic Network, explained spore sampling has been practiced for a long time, especially in epidemiological studies such as tracking how some rust spores migrated from South America to North America. But it’s becoming more popular due to advancements in technology, and is increasingly being used to forecast diseases.

“It’s becoming more popular in the sense that it’s becoming easier to do, and more accurate,” Goswami said.

After the economy took a nosedive in 2008, the University of Idaho considered closing its Parma Research and Extension Center. But the industry helped keep it open, and there’s been a dramatic change in outlook for the facility.

Mark McGuire, director of the Idaho Agricultural Experiment Station, said the university is drafting preliminary designs and cost estimates to consolidate a few old buildings in Parma into a single, modern research facility. The structure would house nematology, the fruit program, entomology and plant pathology, including Woodhall’s revamped diagnostics lab.

“James is demonstrating to a variety of the plant industries there would be value in setting up this spore sampling,” McGuire said.

LAMP is far cheaper, faster and more convenient than the PCR technology.

Woodhall and UI Extension potato pathologist Phillip Wharton will prioritize developing LAMP tests to detect potato diseases, including ring rot, phythium leak and zebra chip. They’ve already developed a better late blight test and have a test for verticillium wilt and early blight in the pipeline. Furthering the science of LAMP is also a top priority at other Northwest institutions.

At Oregon State University, several new LAMP tests have also been developed recently, said Melodie Putnam, director of the university’s Plant Clinic in Corvallis. She said LAMP has been especially useful in testing for an important pathogen of herbaceous ornamentals, as well as for detecting fire blight in fruit trees.

The result of their research, Woodhall believes, will be a cost-effective, easy-to-use early warning system for growers of many types of crops.

In with the old: 'Whole orchard recycling' gains traction