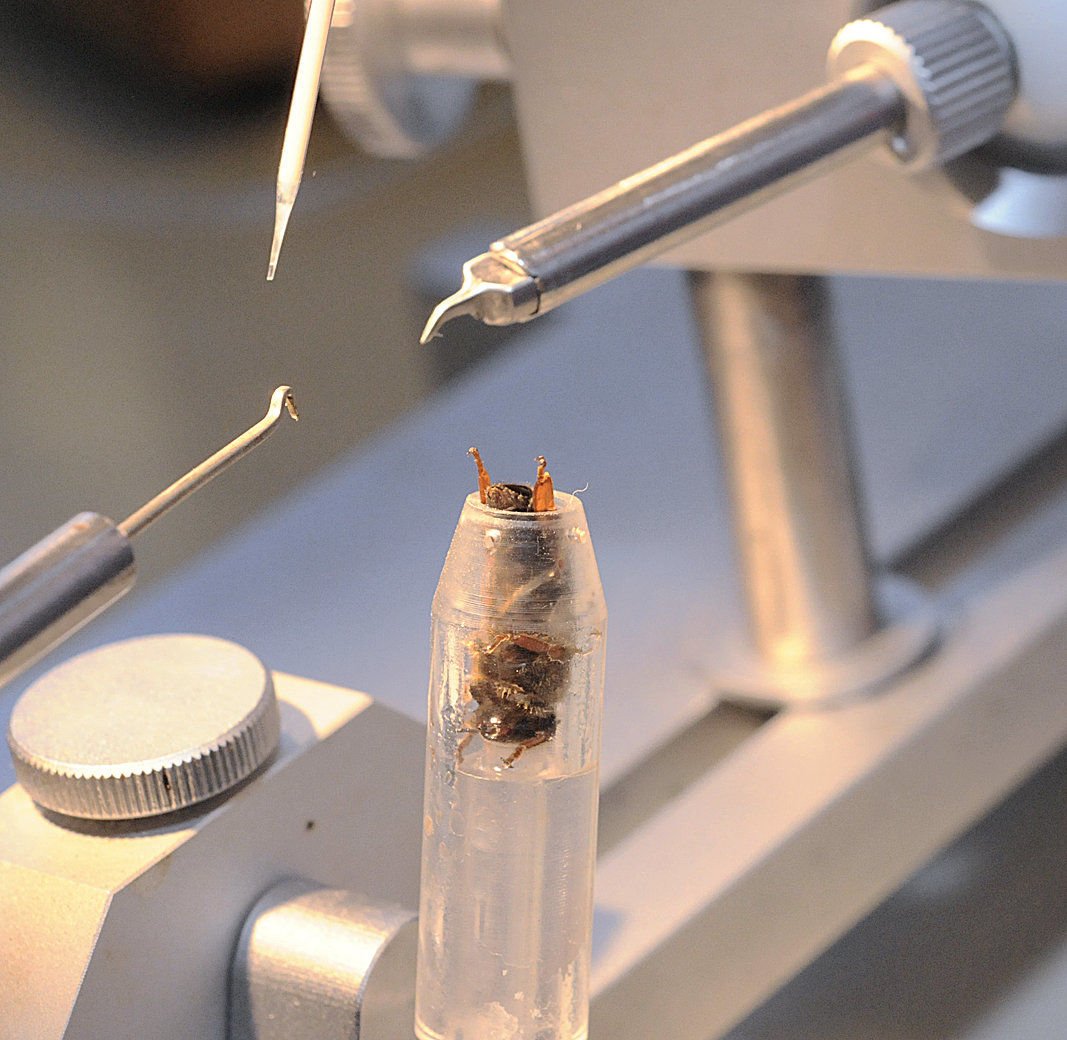 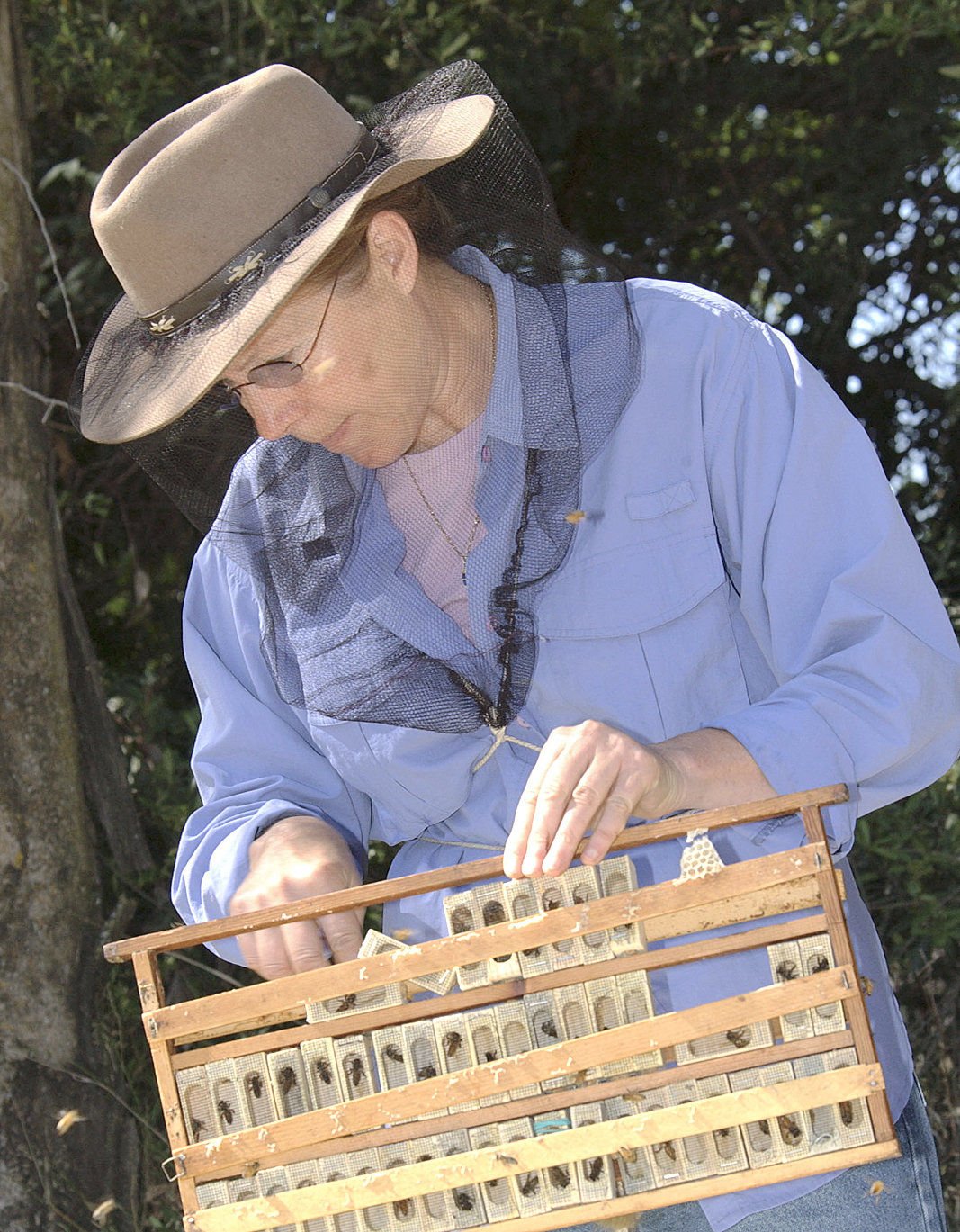 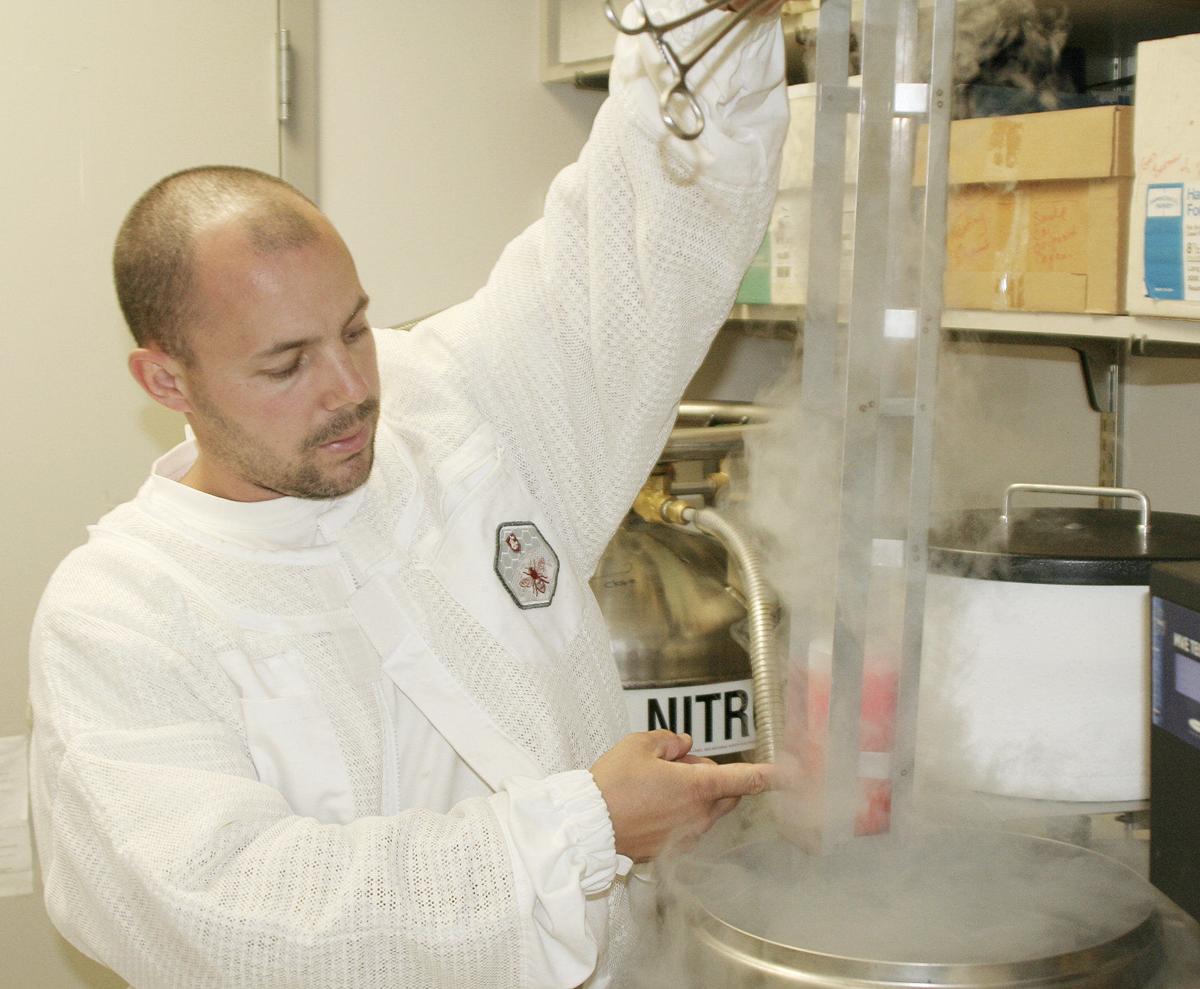 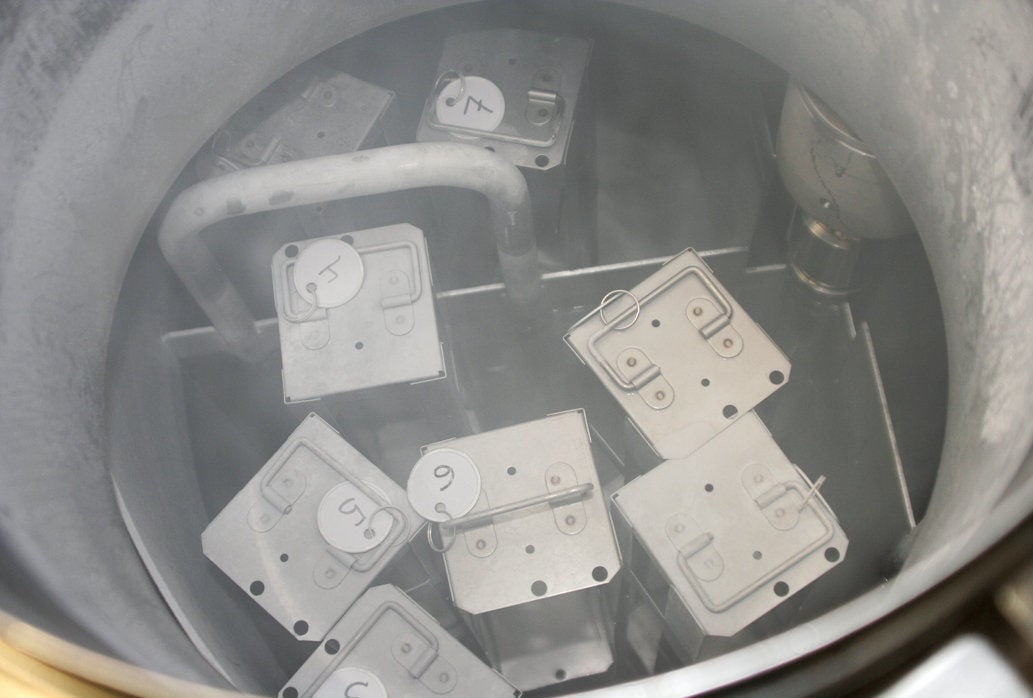 Samples of bee semen are frozen in Washington State University's bee sperm bank Aug. 30 on the Pullman campus. The ability to freeze bee semen makes possible WSU's program to import bee germplasm from outside the U.S. and improve the genetic diversity in the U.S. bee population. 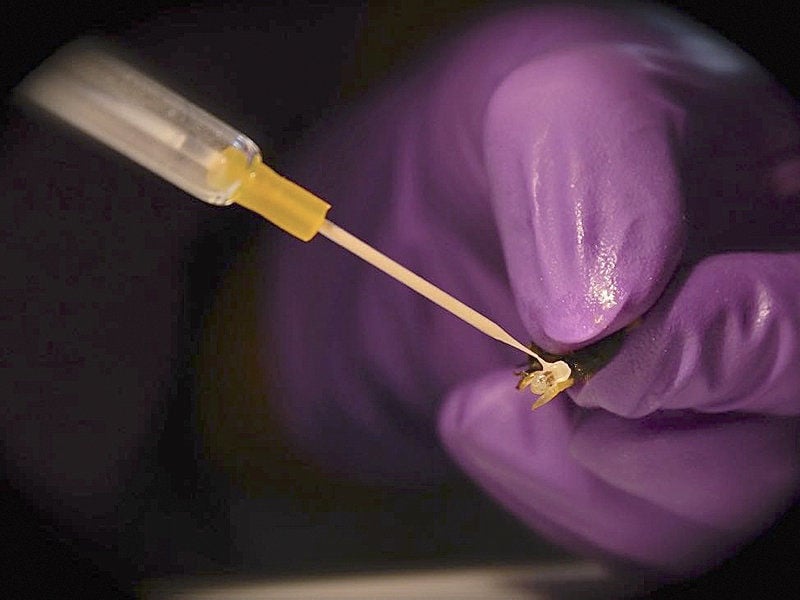 A researcher collects semen from a honeybee. Washington State University researchers are importing bee semen from other countries to improve genetic diversity amongst U.S. honeybees. 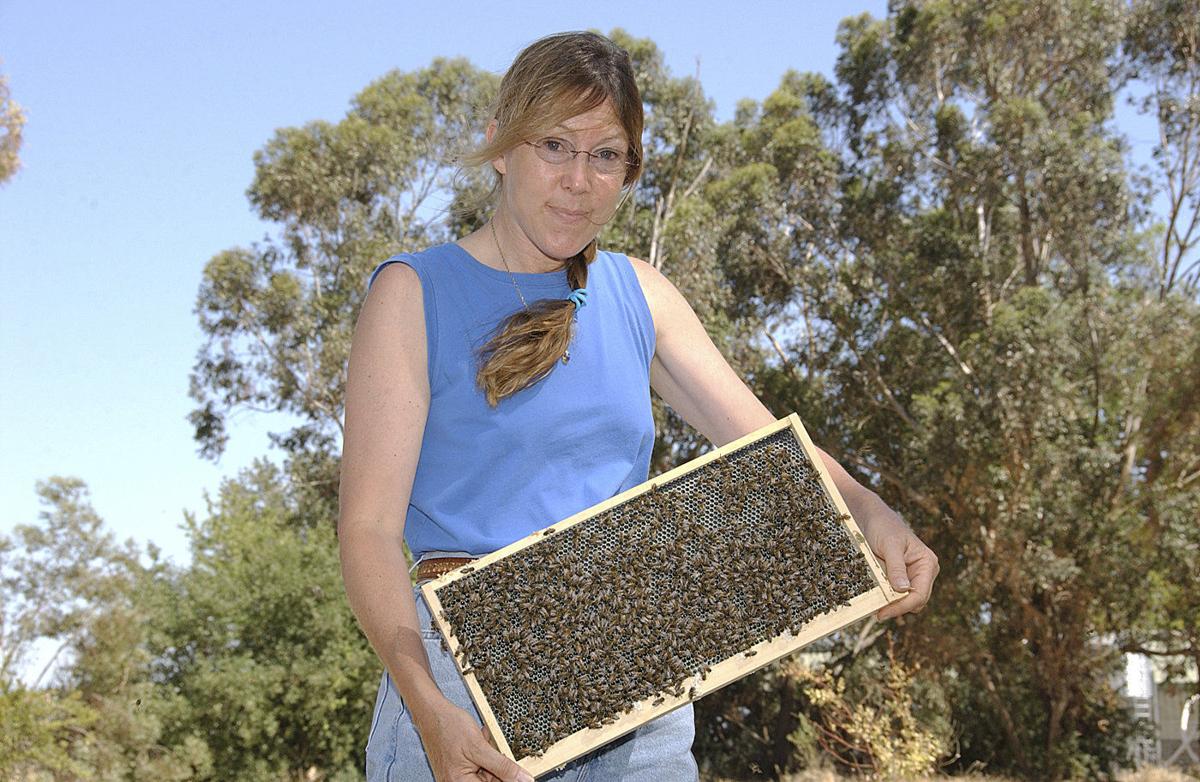 Susan Cobey with a frame full of bees.

Samples of bee semen are frozen in Washington State University's bee sperm bank Aug. 30 on the Pullman campus. The ability to freeze bee semen makes possible WSU's program to import bee germplasm from outside the U.S. and improve the genetic diversity in the U.S. bee population.

A researcher collects semen from a honeybee. Washington State University researchers are importing bee semen from other countries to improve genetic diversity amongst U.S. honeybees.

Susan Cobey with a frame full of bees.

PULLMAN, Wash. — Honeybees buzz freely around the lights in Brandon Hopkins’ office and in the hallway outside.

The bees enter the building on equipment Hopkins and his co-workers bring indoors, drawn by the smell of the honey-laden frames.

Hopkins and several workers converse casually about the day’s work, lightly brushing bees off their sleeves and out of their hair.

“We’re just used to it,” Hopkins said of the visitors.

Hopkins is a research associate at Washington State University, where he manages the laboratory and germplasm repository for WSU’s apiary program.

He’s part of a team of researchers working to breed a better U.S. honeybee.

Hopkins, WSU entomology professor and department chairman Steve Sheppard and research associate Susan Cobey want to improve the genetic diversity in the U.S. honeybee population by importing bee semen from Europe and Asia. They hope to breed bees more capable of warding off pests and diseases, surviving over winter and pollinating in inclement weather.

They produce breeder queen bees, which they provide to commercial queen bee producers, who in turn can produce thousands of queen bees for the nation’s beekeepers. WSU can produce 300 to 400 queen bees a year, Hopkins said.

The U.S. honeybee population is a “mongrelized” or “mutt” mix of races, Hopkins and Cobey said.

“We’re trying to separate them out more and show the true traits of different species,” Cobey said.

Honeybees are not native to the U.S. The federal government closed the border to honeybees in 1922, restricting their importation to prevent the introduction of parasitic tracheal mites.

“What was established before that date is what our industry is based on, which is full of genetic bottleneck issues,” Cobey said. “There’s 28 subspecies of honeybees, and basically our industry is built on two. There’s a real need to conserve that diversity worldwide, because different combinations of things will give us different results, different ability to deal with these pathogens, problems.”

The biggest need in the U.S. honeybee population is anything that would increase resistance to parasitic Varroa mites, Hopkins said.

Varroa mites are fatal to honeybees and are part of the complex colony collapse problem. They feed on bee larvae and reproduce in the hive. In two years a Varroa mite infestation can kill an entire bee colony, according to WSU.

“It’s also the pathogens and viruses they vector — that’s really what’s killing the hives,” Cobey said. “Some bees are more resistant to those than others.”

Varroa mites were first found in the U.S. in 1986, and came from Europe and Russia, so the possibility of finding bee genes for resistance is greater in those overseas bee populations.

WSU is the only lab in the country with permits to import bee semen, and the only laboratory with the ability to freeze it, Hopkins said.

Viruses can still be transmitted through bee semen, but it’s less risky than transporting live bees — and simpler, Cobey said.

The three researchers share collecting duties. They have brought bee sperm from Italy, Slovenia, the Republic of Georgia and Kazakhstan.

Hopkins said they typically collect sperm from thousands of drones. It takes about 20 male honeybees to fill one straw containing 20 microliters. A microliter is one-millionth of a liter.

“We have 800 straws, or something like that,” Hopkins said.

The semen is cryo-preserved in liquid nitrogen at 320.8 degrees below zero Fahrenheit so it can be used whenever beekeepers want.

The researchers artificially inseminate a queen bee with the semen using special instruments.

This year, they inseminated about 100 queens, he said.

Cobey said the bee industry could now see the sorts of advancement possible in other industries, such as cattle, horses and chickens.

“We haven’t had that capability with honeybees,” she said. “It’s pretty exciting, pretty cutting-edge.”

Honeybees are generally well-adapted to most climates, but subspecies of bees have evolved in different locations. For example, Hopkins said, a subspecies of bee lives in the Sahara Desert.

“You can’t take a hive of that subspecies and move it to the Alps or here — it’ll die in the winter,” Hopkins said. “It’s the same species, but it has evolved drastically different characteristics and behavior.”

Most bees in the U.S. originate from Italy — well-suited for California, but not necessarily adapted in the Pacific Northwest for flying in the rain, Hopkins said.

Cold-weather bee races fly under more marginal conditions for pollination. Some bees have similar characteristics, but others won’t forage in rainy weather, increasing the chances of a lost or smaller crop.

“If you have marginal, drizzly weather, they will be out there,” Cobey said. “They seem to fly longer hours. ... These are used to a long, hard winter, hunkered down. Cover them with snow and they’re happy.”

Ray Olivarez, owner of Olivarez Honeybees in Orland, Calif., said Cobey inseminated his Carniolan stock — a subspecies of the Western honeybee — with “pure” stock maintained at WSU to keep breeder mother traits consistent to breed type, characteristics and to infuse “some new blood.”

It enabled Olivarez to replace older, failing breeder queens with reliable queen mothers for production. He hopes to see continued improvement of breeder stock with better tolerance of Varroa mites and disease, as well as keep key traits such as honey production, brood production and gentleness.

“I believe we have quite a bit of diversity in the United States as it sits right now, but once we realize we are not in that situation, it is too late,” Olivarez said. “We need to be proactive in this area.”

Garry Reeves, a beekeeper in Moores Hill, Ind., purchases breeder queens through Cobey to breed “some of the best production queens east of the Mississippi.”

“As a beekeeper and queen breeder, we are always looking for something better,” Reeves said. “I need breeder queens that will produce daughters that are hygenic in nature that help control my mites, viruses, (are) gentle and produce honey and overwinter well.”

Reeves said he noticed a difference after the first year. After the second, he realized it wasn’t a fluke.

“The bees were much more gentle, overwintering success had picked up and (they made) more honey,” he said.

Reeves had used breeder queens from other universities and private individuals. Before working with Cobey and WSU, he had lost 40 percent of his 120 hives. In 2013, his losses were 8 percent, in 2014 6.4 percent and 2015 6.6 percent, well below the national average, he said.

“I can only hope that more people will start using good quality queens,” he said.

Hopkins recently attended the first meeting of the USDA National Animal Germplasm Program’s honeybee committee to discuss which species are important to preserve.

A bee subspecies might possess a key trait, such as adaptability or Varroa resistance, so it’s important to maintain them for current or future breeding, Hopkins said.

“It’s like a safety net, because there’s other problems in the pipeline,” he said, noting that tropilaelaps mites haven’t been found in the U.S. yet, but are supposed to be “even more devastating” than Varroa mites.

“Hopefully it never makes it here, but inevitably in this kind of a global system, diseases seem to get spread everywhere. And those are just the ones we know about.”

The university is preparing queen bees for overwintering at its Pullman, Wash., campus. Researchers will monitor them for foraging behaviors or hygienic behavior to see if they possess the desired characteristics. Some will go to California in February to be assessed for almond pollination.

The next queen bees will be delivered to commercial queen bee producers in February or March. Many producers are waiting in line for the bees, Hopkins said.

Without WSU’s work, honeybees would have to travel farther to places such as California and Washington state to meet the demand for fruit and nut tree pollination, Cobey said. The U.S. even imported bees from Australia for several years to help with early-season almond pollination, she said.

“I guess that’s the picture I imagine without bees,” he said. “Production standards are going to have to be much, much lower, because there’s no way people or anything else can do pollination. You’re never going to get the production you see today.”