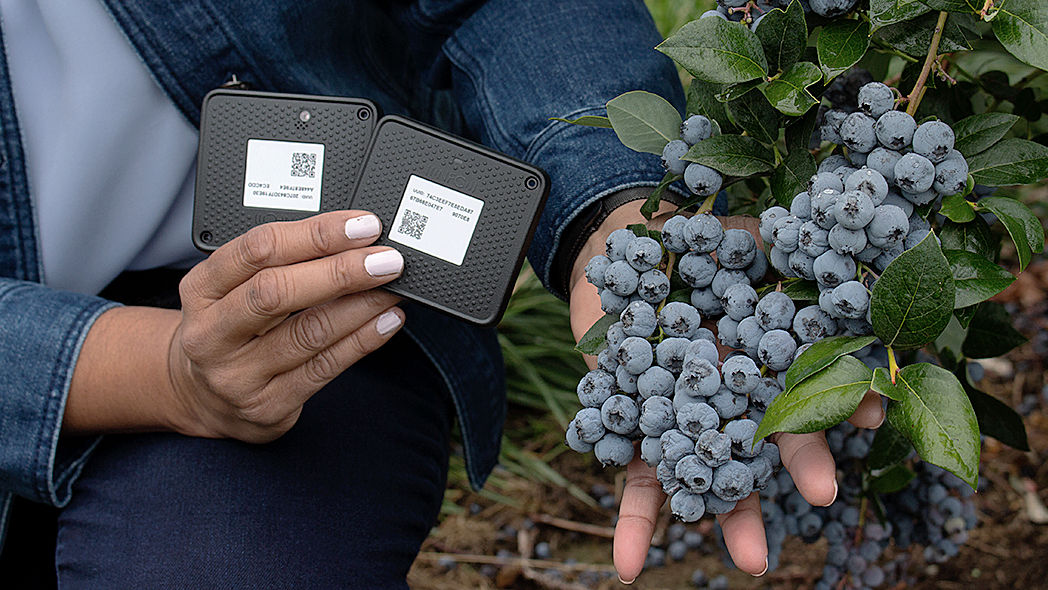 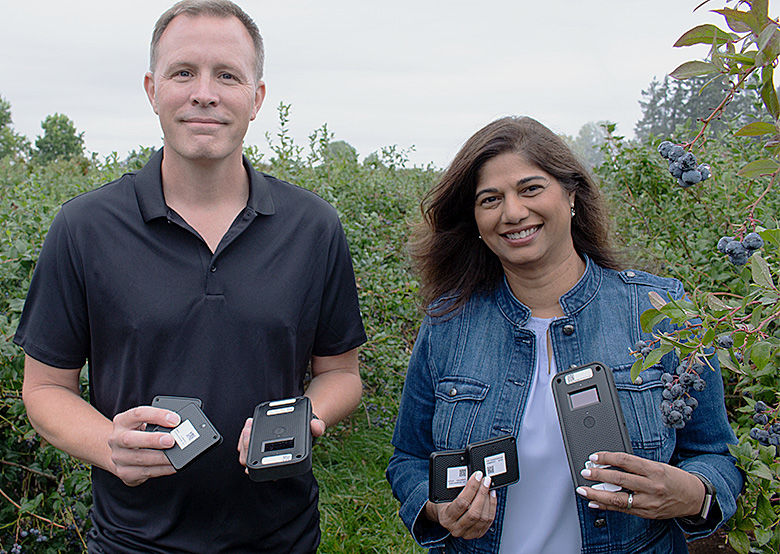 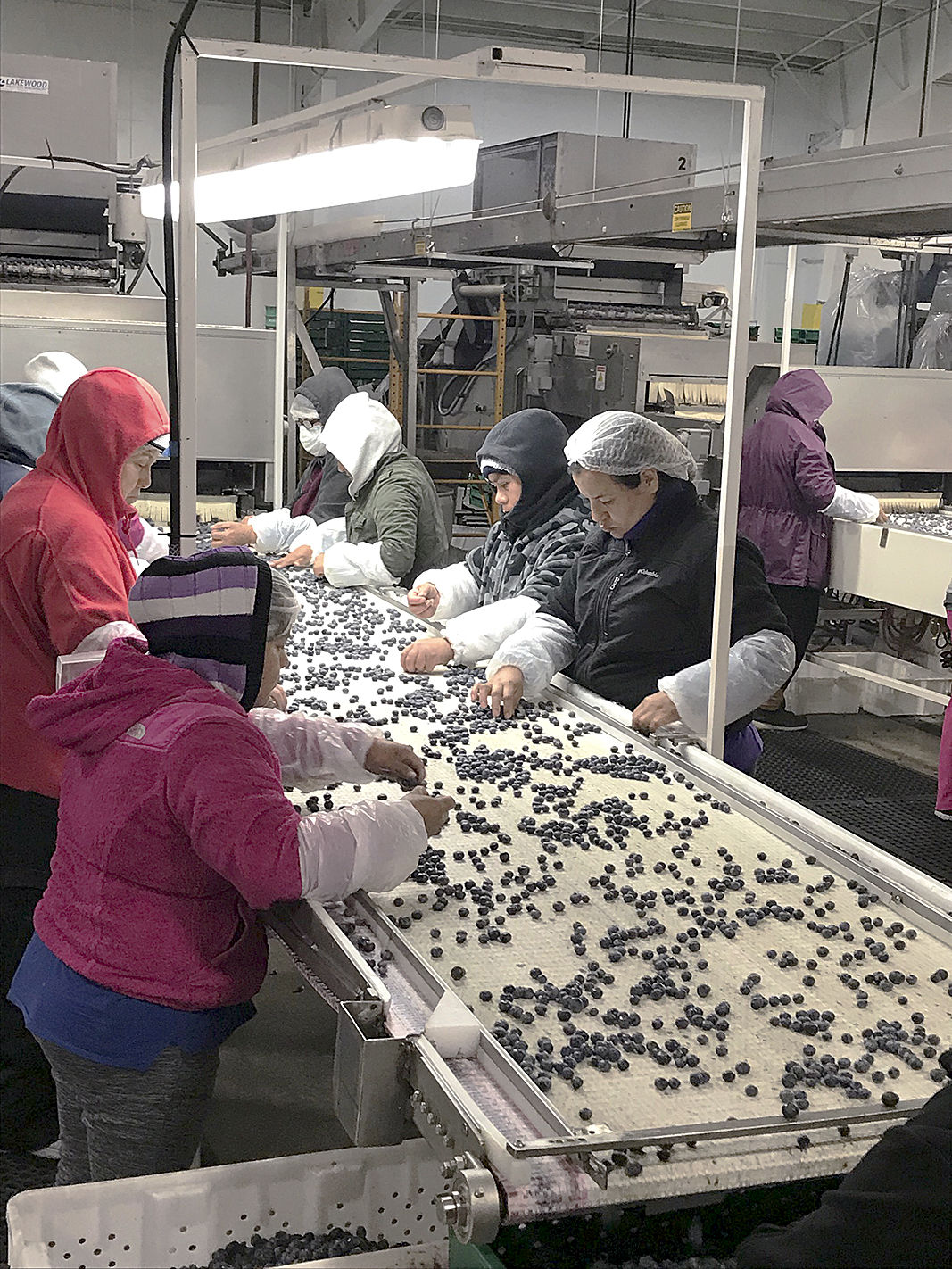 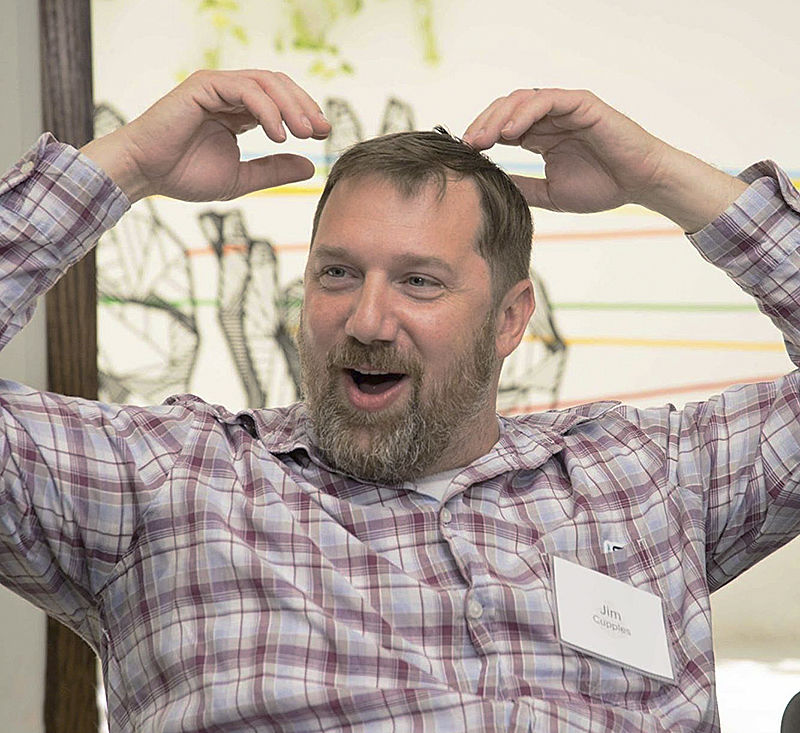 Tech entrepreneur Jim Cupples, of Springfield, Ore., says blockchain can be used by farmers and ranchers to store records about their management practices. 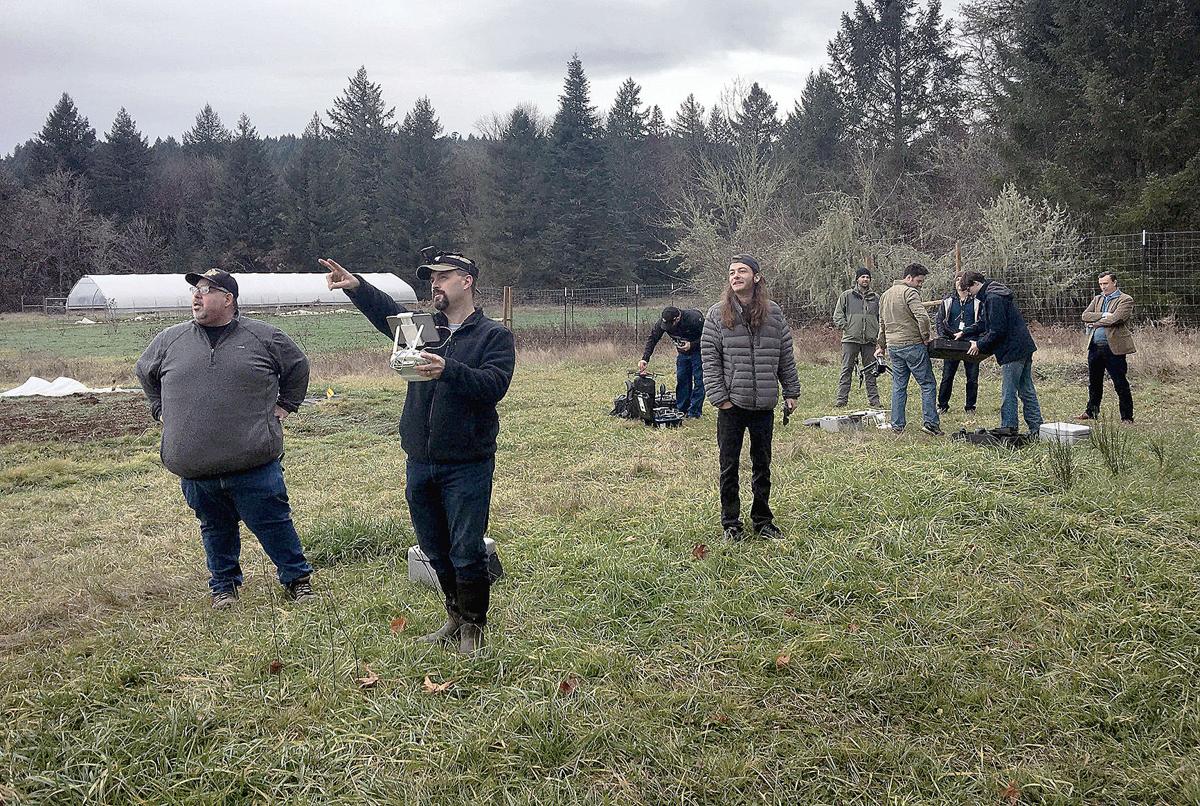 From left, Lane County Community College Drone Program students Marq Bauman, Shawn Schneider and Tristan Soutar fly a drone over Moondog’s Farm in Marcola, Ore., as part of the development of AgCheck, a tool that allows farmers to upload visual data about their management practices to blockchain. 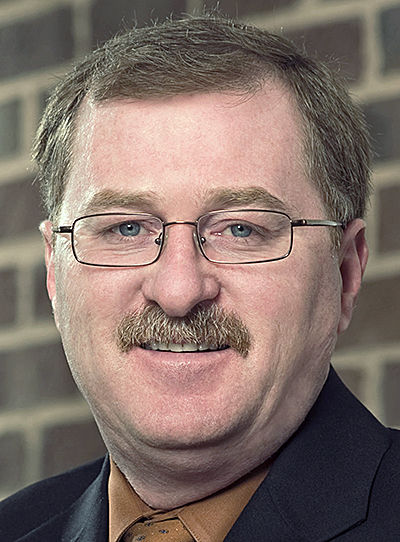 Ed Treacy is the vice president of supply chain and sustainability for the Produce Marketing Association, a national trade association based in Newark, Del.

Tech entrepreneur Jim Cupples, of Springfield, Ore., says blockchain can be used by farmers and ranchers to store records about their management practices.

From left, Lane County Community College Drone Program students Marq Bauman, Shawn Schneider and Tristan Soutar fly a drone over Moondog’s Farm in Marcola, Ore., as part of the development of AgCheck, a tool that allows farmers to upload visual data about their management practices to blockchain.

As soon as fresh blueberries are picked at farms in Oregon’s lush Willamette Valley, the race is on to prevent the fruit from spoiling.

Blueberries ripen quickly after harvest, so they must be stored immediately at temperatures just above freezing to extend their shelf life. Any missteps can lead to waste, costing producers serious money. Oregon ranks number one in the country for blueberry production, valued at more than $180 million in 2018.

Tech giant Intel, which has a campus west of Portland, recently led a pilot project tracking locally grown berries from the field to the processor using blockchain — an emerging technology widely associated with cryptocurrencies such as Bitcoin, but is now also proving to be a valuable tool for agriculture.

Blockchain is a shared digital ledger that records every transaction in a supply chain. It allows multiple parties to access and submit data over a network of computers, including when and where a crop was harvested, packed, shipped and sold to consumers.

Each “block” of data is linked, creating a “chain” of information that allows anyone to instantly track a commodity from the field all the way to the grocery store.

Food safety regulators are optimistic that blockchain will reduce the time it takes to trace back the source of a food-borne disease outbreak from days or weeks to minutes or even seconds, helping to reduce illnesses while issuing more precise recalls.

Farmers and ranchers also benefit by ensuring their fruits, vegetables, meat and seafood are as fresh as possible by the time it reaches consumers.

For its project, Intel worked with Curry & Co., a large blueberry packer in Brooks, Ore. The company placed remote sensors about the size of a handheld pager in crates of berries arriving by truck from Sinn Farms in nearby Silverton, monitoring location, temperature and other environmental factors in real time.

Data from the sensors were uploaded to blockchain, allowing managers to monitor the shipments and determine if they encountered any problems or delays en route to stores. Curry & Co. ships about 8 million pounds of berries every year that are distributed to major retailers including Walmart, Kroger and Costco across the country, as well as overseas.

Ninette Vaz, Intel’s global supply chain internet of things senior manager, said the project was a success, though the company is still learning how to improve the process.

“I think the technology is ready,” Vaz said. “I truly believe this can be so valuable.”

Rather than having one database controlled by a single company, blockchain is unique in that it is decentralized, meaning it can be viewed by anyone who is authorized. That makes it less vulnerable to fraud, since no one individual or company is in charge.

Each transaction is recorded as a “block,” which cannot be changed retroactively. The result is a permanent, transparent log of data showing the life and times of virtually any crop or product.

Blockchain garnered headlines as the underlying technology that enables the existence of cryptocurrencies such as Bitcoin, which peaked in value in late 2017 at nearly $20,000 each. Companies such as Intel are now realizing the platform has potential to create more trustworthy supply chains across multiple businesses, including agriculture.

“Everyone is seeing the same information,” Vaz said. “It’s almost like having your eyes on the prize at all times.”

Ed Treacy, vice president of supply chain and sustainability for the Produce Marketing Association — a national trade association based in Newark, Del. — has been monitoring blockchain for several years. He formed a blockchain task force within the association in 2018 to study potential uses for the technology.

“Having visibility of your supply chain ... you can see when things aren’t performing the way they should, and address that,” Treacy said. “Typically, people don’t have that visibility.”

For example, Treacy said the shelf life of fresh strawberries is severely reduced when they are stored at temperatures over 34 degrees. If shippers and retailers are able to monitor conditions in real time, they can address problems right away and ensure the berries are fresh when they reach supermarket shelves.

“Typically, what happens is it looks pretty good in the store, but if conditions such as temperature and humidity have been compromised during its travels from the field, then you’re going to see a reduced shelf life,” Treacy said.

The same idea is what drove the blueberry trial between Intel and Curry & Co. during harvest season in 2018. The results were published last year.

At the time, Aaron Ensign, president of Curry & Co., described blockchain as the future of food safety and handling. He said the ability to react in real time is valuable because blueberries are an expensive commodity, with some shipments valued at more than $100,000.

“Our goal is to provide customers with the most fresh and delicious product possible,” Ensign said. “We’re absolutely interested in the data.”

The U.S. Food and Drug Administration is interested in using blockchain to track and trace the source of contaminated foods, such as the spring 2018 outbreak of E. coli in romaine lettuce that killed five people and sickened more than 200 others across 36 states.

Jennifer McEntire, vice president of food safety for the United Fresh Produce Association in Washington, D.C., said that incident, along with several others, highlighted the need for better supply chain traceability of fresh fruits and vegetables.

“FDA has said, categorically, that traceability in the fresh produce industry needs to improve,” McEntire said.

Last April, the FDA announced its “New Era of Smarter Food Safety,” looking at adopting technologies such as blockchain to create a more traceable and safer food system.

A spokeswoman for the FDA said blockchain can dramatically shorten the time it takes to locate the source of an outbreak, in turn minimizing the number of products that have to be recalled and saving many millions of dollars in lost sales.

“When the lack of transparency in supply chains delays identification of contamination sources and the root causes of product problems, the economic and public health costs can be considerable,” the agency wrote in a statement.

Major retailers from around the world are already beginning to adopt blockchain to trace fresh produce. In 2017, IBM started its Food Trust Network, which includes retail giant Walmart and Carrefour, a French company that has 11,000 stores in 30 countries.

The vice president of food safety for Walmart at the time, Frank Yiannas, initially led this effort for the retail giant. He is now the deputy commissioner for food policy and response for the FDA.

Treacy, of the Produce Marketing Association, serves as an adviser to the IBM Food Trust Network. He said as long as the benefits the data provide outweigh the costs, it will continue to gain support.

“I deal with member inquiries every day,” he said.

McEntire said the United Fresh Produce Association, which represents 1,500 members, is simply focused on making produce safer and healthier, whatever the solution may be.

The potential for blockchain in agriculture is not limited to track and trace.

Jim Cupples, a tech entrepreneur based in Springfield, Ore., is developing a new platform called AgCheck, flying drones over farms and uploading the images to blockchain to verify growers are using sustainable practices such as cover crops and no-till farming.

“You can use drones to verify things that are visible,” Cupples said. “It allows that assurance that it’s not just the first 10 acres from the road that’s using regenerative practices.”

Information about growing practices is crucial for consumers and certifying agencies alike, Cupples said, since the crops are often sold at a premium price. Storing the data on blockchain means it can be accessed from anywhere, while ensuring records won’t be changed later.

“Once the data is in there, it’s in there,” Cupples said. “It can’t be messed with.”

Cupples, 45, is also behind several other data-related startups, including Run For Office — a website where users can enter their address and find the closest elected offices, from local school boards to state legislatures.

Cupples built the prototype for Run For Office with engineering students at Portland State University and the University of California-Berkeley before partnering with NationBuilder, a software company based in Los Angeles, to take the site public in 2015.

Not long after, Cupples said he became interested in creating something similar for agriculture. He went on to design an online database called All the Farms, where users enter their address and find the closest local farms and U-pick operations.

In starting his latest venture, AgCheck, he partnered with students from Lane Community College to fly drones over Moondog’s Farm in Marcola, Ore., near Eugene. Cupples said farmers can benefit greatly from storing records such as these on blockchain.

“It makes a heck of a lot more sense to have that information on blockchain where it’s super duper accessible, rather than on an Excel spreadsheet,” he said.

Despite the early success of blockchain in agriculture, researchers and developers agree there is still work to be done.

Treacy said large providers need to come together to agree on a common set of data to create consistency and regularity among supply chains. As it is, he said, there are several independent, unrelated private blockchains enabling supply chain visibility.

“If interoperability is not figured out, it will stall this whole thing,” Treacy said. “We need all these big providers to get together and agree there is a need for this, and figure out how to do it.”

McEntire said blockchain is one of many data-sharing tools available, and companies should be clear what issues they need to resolve before embarking.

“It’s a versatile tool that can be used for many things,” McEntire said. “Why do you want to use blockchain, is probably the first thing people should be asking themselves.”

Vaz, with Intel, said the primary hurdle now is for people to become more comfortable with adopting a new way of keeping records.

“When you get into it, you’ll realize it’s not as complicated as it might seem,” she said. “It will make it easier to do great work in the agriculture industry.”