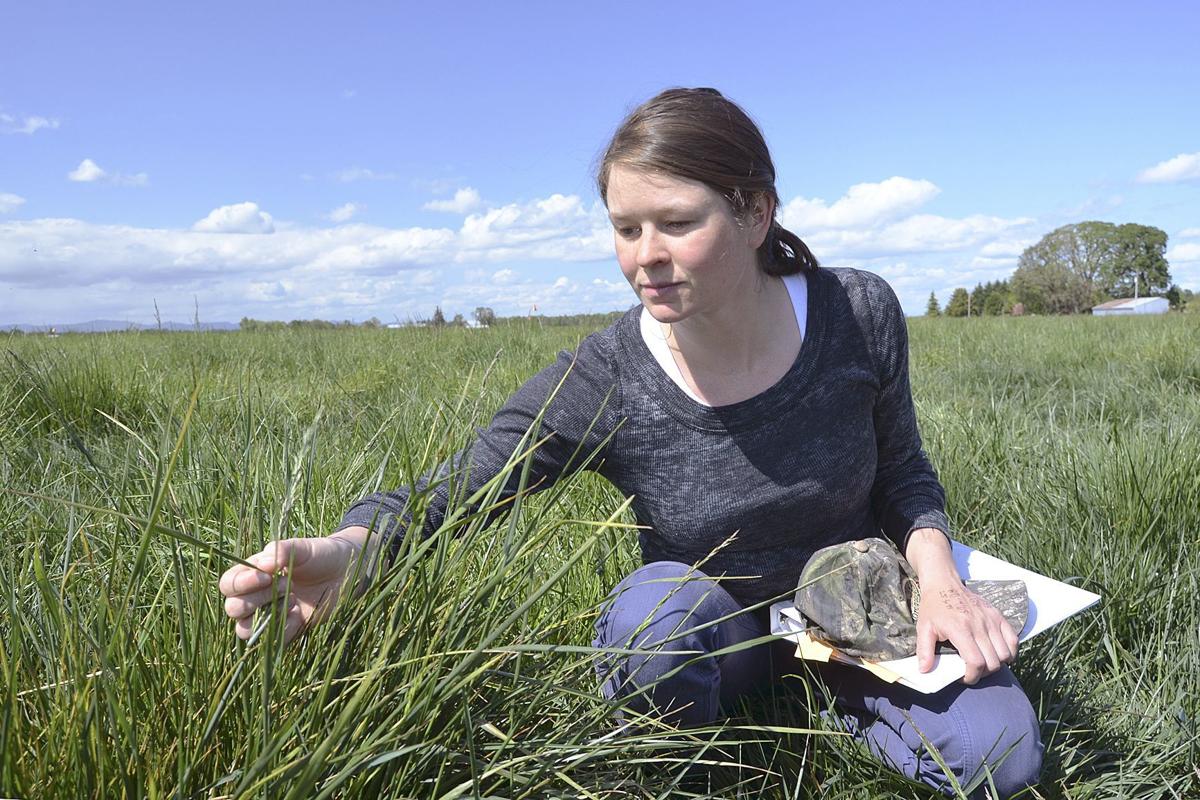 of OSU Extension Clare Sullivan, OSU Extension Field Crops Faculty for the mid-Willamette Valley, examines the field health of tall fescue, checking for the presence of aphids and weeds. 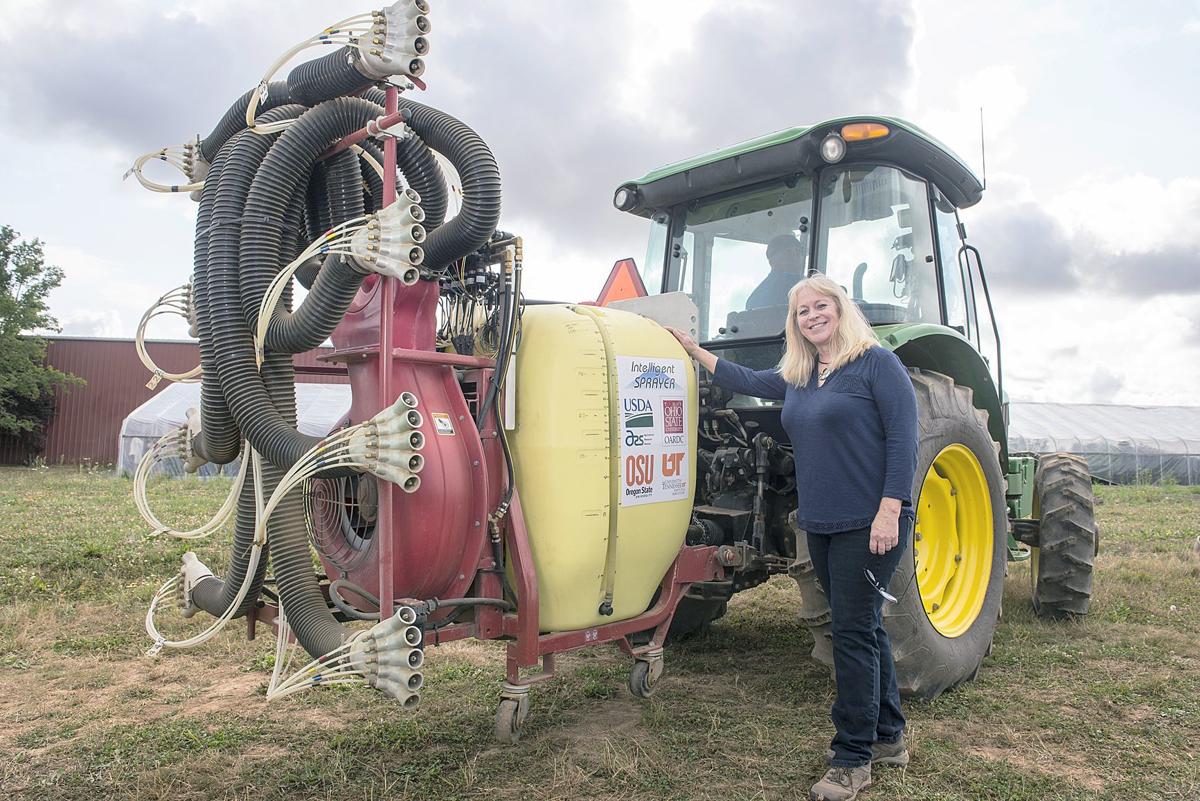 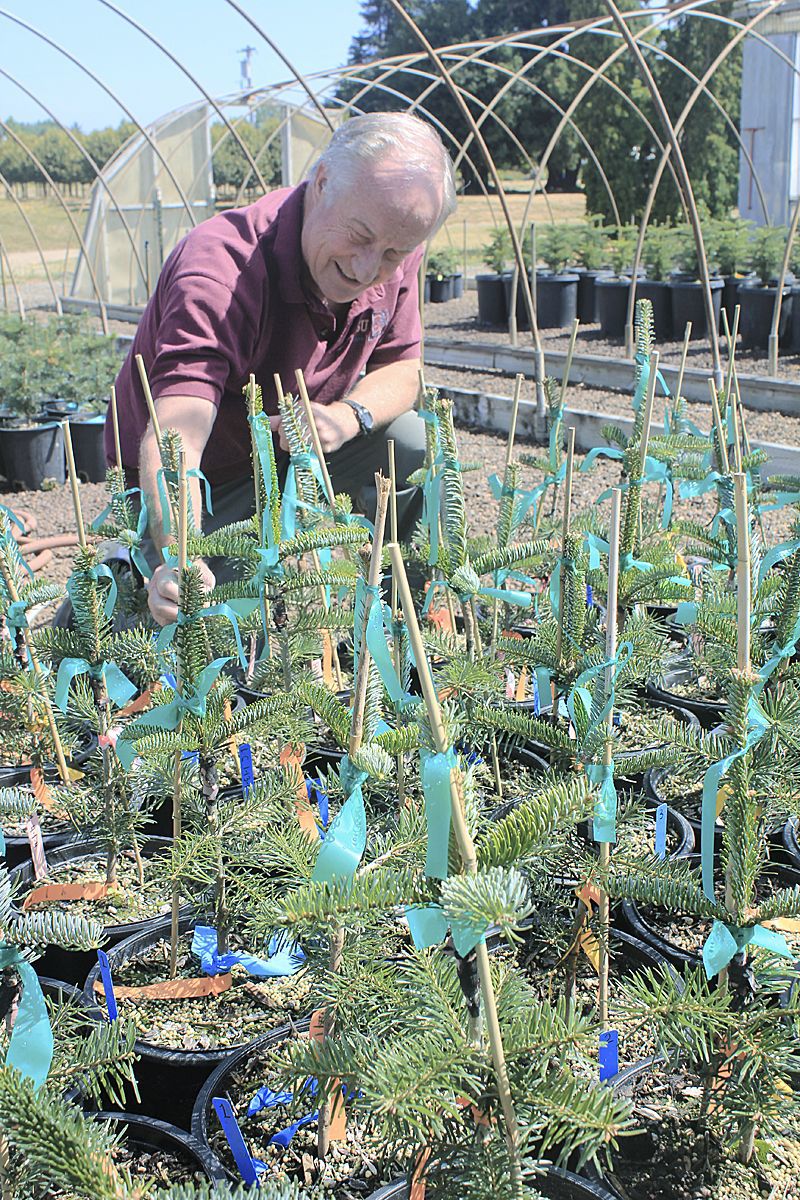 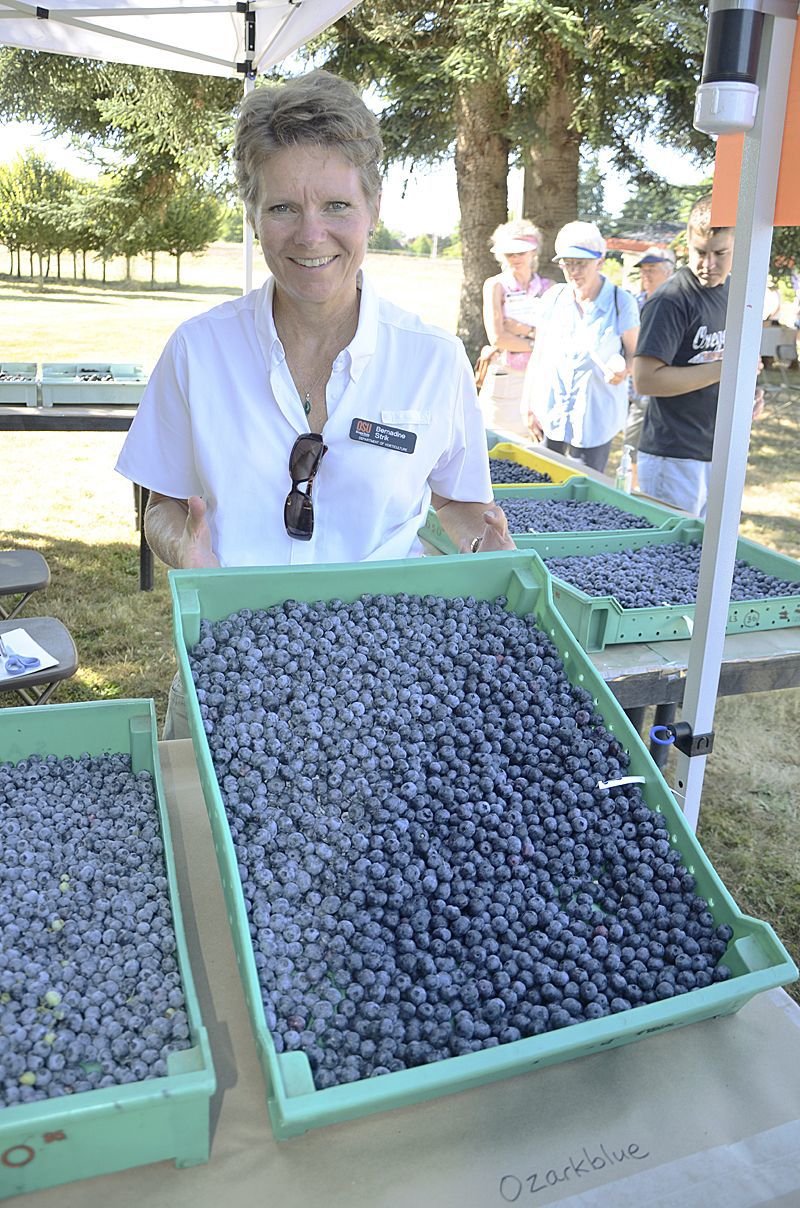 of OSU Extension Dr. Bernadine Strik, OSU Extension Berry Specialist shows off a variety of blueberries she helped bring to growers in Oregon. 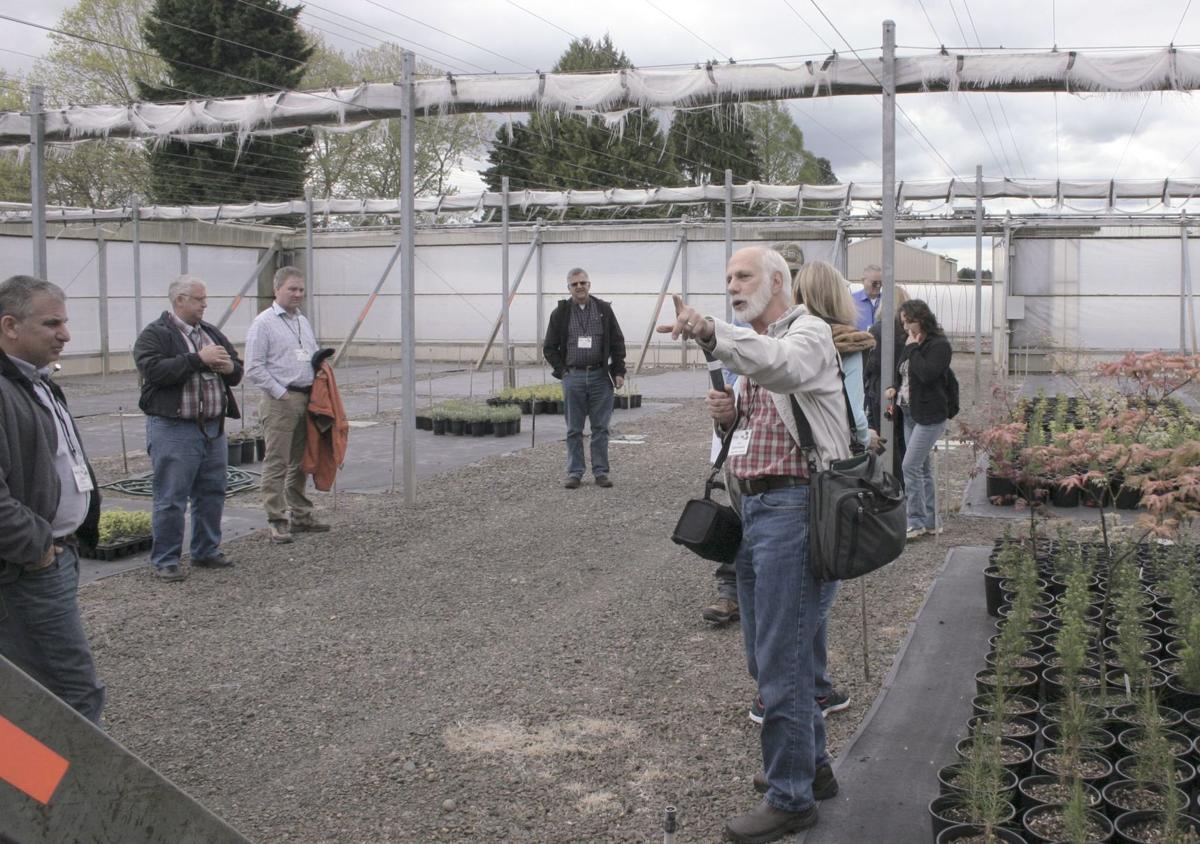 of OSU Extension Clare Sullivan, OSU Extension Field Crops Faculty for the mid-Willamette Valley, examines the field health of tall fescue, checking for the presence of aphids and weeds.

of OSU Extension Dr. Bernadine Strik, OSU Extension Berry Specialist shows off a variety of blueberries she helped bring to growers in Oregon.

When the first crop of university Extension agents took to the fields a century ago, U.S. agriculture was relatively primitive.

Farm power was still mostly generated by horses and mules in 1914, and fertilizer came in the form of manure and crushed livestock bones.

The human landscape was also much different — roughly 1 in 3 Americans were employed in agriculture back then, compared to fewer than 1 in 60 today.

The population shift away from farming is one of the reasons university research and Extension is struggling to remain relevant to modern Americans, said Ben West, regional Extension director at the University of Tennessee, who has studied the issue.

“They don’t see directly the benefits of Extension like their grandfathers did,” he said.

As university researchers and Extension agents look to the future, they’re contemplating how to deploy limited resources to stay useful to farmers as well as the trade-offs such decisions involve.

Within agriculture, the role of Extension has changed in the past hundred years.

Not only do Extension agents have fewer farmers to educate, but those growers are now more likely to have college degrees themselves, West said.

At the same time, suppliers of seed, fertilizer and other inputs have hired cadres of agronomists who are sometimes seen as supplanting the role of Extension, he said.

Behind the scenes, though, these private professionals often seek advice from Extension specialists, West said. “The farmer doesn’t see that interaction.”

Disseminating information through private agronomists — as well as nonprofits and other entities — is a cost-effective way of keeping university researchers and Extension agents relevant, said Scott Reed, director of the Oregon State University Extension Service.

“We don’t have to do the work the certified crop advisors are doing, but we can help the CCAs be at the top of their game,” Reed said.

Likewise, email and social media have made it easier for the Extension Service to communicate with farmers, he said. Growers can also get training through online learning modules instead of being instructed one-on-one.

“The more we focus on access rather than delivery, the more efficient we become,” he said.

University representatives are careful to point out that “human interface” will always be part of the Extension Service, but some say the increased reliance on technology comes at a price.

“They no longer have the presence or people on-farm that they once had. That link has weakened,” said Tom Peerbolt, who runs a crop consulting company for berry growers and works closely with Extension.

The role of university researchers at agricultural experiment stations has also evolved as they’ve become more reliant on outside money for projects, he said.

More of the reseachers’ time is spent applying for grants, and the studies tend to be more high-level rather than applied on-farm research, Peerbolt said.

As farm companies have grown bigger and more vertically integrated, they’ve been investing in proprietary research, he said. Smaller growers, however, don’t have this option.

“The larger companies are doing their own research. They’re using knowledge as part of their corporate advantage,” Peerbolt said.

Growers, through their crop commissions, are being asked to fund a larger share of the work done by university researchers in recent years, paying not only for projects but also for salaries, said Mike Omeg, a cherry farmer near The Dalles, Ore., and Capital Press board member.

As growers become more responsible for basic funding, the university system begins to take on the role of a paid consultant, he said.

The question then becomes whether it might be less expensive to conduct research privately, as some cooperatives in Europe have done, Omeg said.

“It’s definitely in the realm of reasonable possibilities,” he said. “You lose some control when you hand the funds over.”

Realistically, though, research and Extension must diversify its funding base if it hopes to stay viable, according to university leaders.

The Extension Service has traditionally been funded by the federal, state and county governments, said Sonny Ramaswamy, director of the USDA’s National Institute of Food and Agriculture, which oversees and funds the system.

After the 2008 financial crisis and the recession that followed, states and counties slashed their budgets for Extension, which forced the federal government to reduce its support, he said.

“If states aren’t able to match those numbers, we will withhold our funds as well,” Ramaswamy said.

In 2010, state funding for Extension Services dropped nearly 16 percent, from $977 million to $823 million, and has still not recovered, according to USDA figures. Since then, the federal contribution has decreased about 18 percent, from $567 million to $465 million.

Due to these cuts, as well as inflation and the increasing cost of healthcare and pensions, the total “footprint” of Extension Services across the U.S. has shrunk by one-third since the recession began, Ramaswamy said.

Financial pressures are likely to continue unless Congress and state legislatures begin directing more revenue toward the system, he said. “Absent that kind of recognition, farmers are going to have to bear a bigger part of the burden.”

The Heritage Foundation, a free-market think tank, argues that a thorough re-examination of university agricultural research is preferable to increased funding.

Universities should focus on studies that serve the public good but aren’t likely to be taken up by private researchers, said Daren Bakst, agricultural policy fellow at the foundation.

“There’s likely a benefit to this research, and I don’t think that’s the problem. The question is whether or not the private sector would do it,” he said.

Bakst said he’s “less sympathetic” toward the Extension Service’s role in disseminating information, as this function is more easily privatized.

“There is a clear way to provide a service to someone and make money doing it,” he said.

While Bakst argues that farmers can best decide for themselves whose advice to trust, others say the great advantage of the Extension Service is its reputation for even-handedness.

University research and Extension is unlikely to be displaced by private companies because growers see the public system as impartial, said West of the University of Tennessee.

“I think our role will always be to provide an unbiased source of information,” he said.

Extension agents are well-positioned to guide farmers who are facing policy predicaments regarding species, water, air quality and pesticides, said Barbara Allen-Diaz, director of Cooperative Extension at the University of California.

“All of these types of issues, we have Cooperative Extension folks intimately involved in navigating the discourse,” she said. “That’s what a public university can bring to the table.”

“It’s not something the private sector will jump on because it doesn’t appear to have that big payoff,” he said.

University faculty also conduct fundamental research that doesn’t have an easy return on investment, he said.

For example, Wilbur Ellis employees are more likely to collect soil electroconductivity data for an individual farm, while the university system will draw correlations between that information and crop yields, Davis said.

“They do that baseline work and then we take it to the grower,” he said.

In situations where the private and public sectors are rivals, that’s often beneficial to farmers, said Jim Peterson, vice president of research at Limagrain Cereal Seeds, a crop breeding firm.

“Everyone needs to appreciate that competition is a good thing, especially with plant breeding,” he said.

On the other hand, it’s unproductive for university and private breeders to be overly duplicative of each other’s efforts, so in some instances, they’d best serve growers by joining forces, Peterson said. Limagrain, for example, is partnering with the University of Idaho on wheat breeding.

It makes sense for university researchers to concentrate on basic research that’s more risky from the market perspective, such as studying basic genetics and biochemical pathways, he said.

“We don’t want to run the public programs out, we want to work with them to bring the best product to market,” Peterson said.

The university system already has facilities and scientists at multiple locations, so it’s logical for private companies to use that “infrastructure” rather than build it themselves, said Paul McCawley, association director of Extension at the University of Idaho.

“For them to replicate that would be far more expensive than for us to do it,” he said.

Seed company charged with misprision of a felony