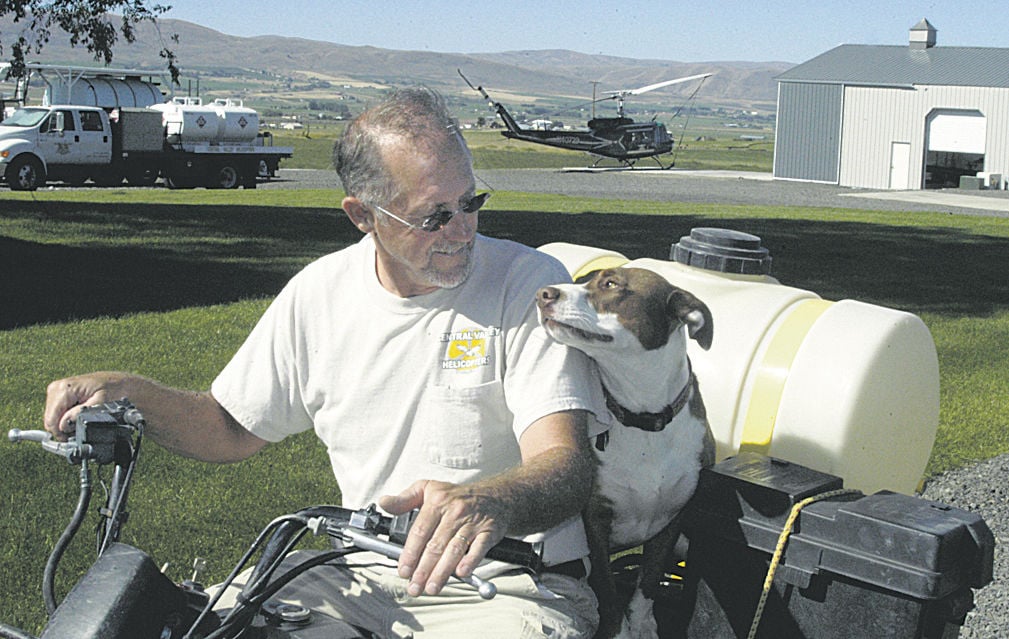 Matthew Weaver/Capital Press Ron Cline, president of the Pacific Northwest Aerial Applicators Alliance and owner of Central Valley Helicopters in Ellensburg, Wash., shares a loving glance with his security dog, Maggie, as he talks about the impact of 9/11 on the industry at his business the morning of Aug. 24. 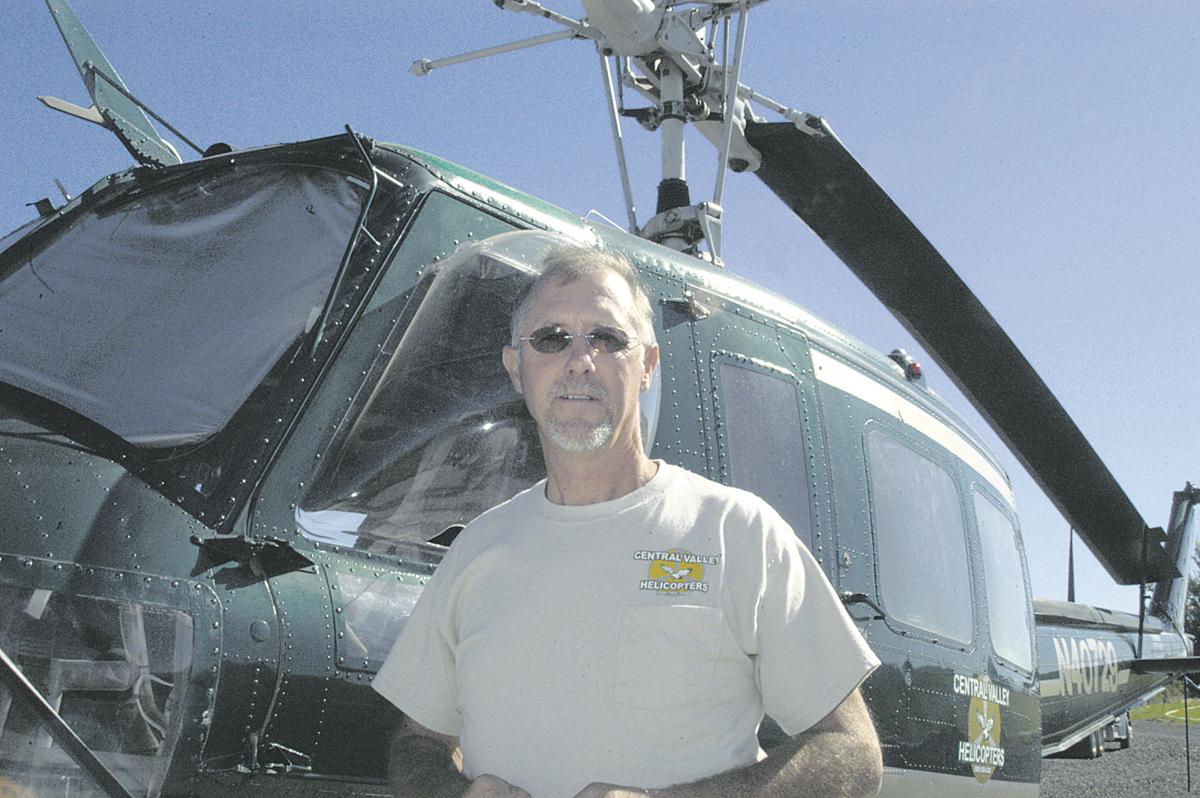 Matthew Weaver/Capital Press Ron Cline, president of the Pacific Northwest Aerial Applicators Alliance and owner of Central Valley Helicopters in Ellensburg, Wash., shares a loving glance with his security dog, Maggie, as he talks about the impact of 9/11 on the industry at his business the morning of Aug. 24.

ELLENSBURG, Wash. -- It was a Tuesday morning 10 years ago when Ron Cline and millions of other Americans saw the world change.

An aerial applicator and owner of Central Valley Helicopters, Cline turned on his television at 6 a.m. to see shocking images of an airliner hitting the World Trade Center in New York and smoke billowing from the tower.

When a second plane hit the other tower and a third crashed into the Pentagon, Cline knew they were acts of war.

He turned off the television and called the National Agricultural Aviation Association office in Washington, D.C. Cline, a member of the Pacific Northwest Aerial Applicator's Alliance and now its president, wanted to determine the impact of the attacks on his industry, which depends on the ability to fly.

Representatives of the association had already spoken with the U.S. Department of Transportation. All aircraft, including aerial applicators, were grounded.

Cline had pesticide applications to perform on some apple orchards.

"We weren't going to be able to do that," he said.

The ban on commercial aviation was lifted after three days, but it took about two weeks for aerial applicators and others in general aviation to get back into the air, said Andrew Moore, executive director of the national association.

"It was a day I'll just never forget. Our whole culture changed," Moore said. "With our industry, the same thing."

Security became the new mantra of the federal government, and nowhere was that focus more pronounced than aerial applicators. Not only were they grounded for an extended period, every aerial applicator was investigated by the FBI and the Federal Aviation Administration and strict new regulations were adopted for storing aircraft and chemicals, Moore said.

Among the new requirements were electronic security systems for hangars and propeller locks, chains or tie-downs for aircraft stored outside. Hidden switches were installed in aircraft.

Moore estimated grounding the nation's aerial applicators cost the industry about $40 million -- and millions of dollars more in losses for farmers.

In the fallout from 9/11, farmers and agriculture-related businesses across the nation saw the way they do business change. Once the security of farms and ranches in rural America was a given, but now U.S. agriculture faced intense scrutiny. Besides aerial applicators, others in agriculture faced stiffer regulations on food safety, farm labor, fertilizers, pesticides and shipping that took a toll not only on their bottom lines but on their psyche.

A 2002 congressional report on the economic effects of the attacks said a disruption of any of the key agricultural sectors -- crop and livestock production, transportation, food manufacturing, food safety regulation and global trade -- could have serious consequences for the nation.

The report called for better communication and coordination among food safety agencies such as the U.S. Food and Drug Administration and USDA.

One of the solutions Congress offered was the Department of Homeland Security, a mega-department that absorbed 40 agencies and most federal functions related to food safety, border security and immigration law enforcement. Agencies ranging from the Coast Guard and Border Patrol to the Immigration and Customs Enforcement agency were rolled into Homeland Security.

President George W. Bush signed the law creating the department on Nov. 25, 2002. The department has an annual budget of $57 billion.

Tucked into the department are 2,400 agriculture specialists. They are among the 21,186 inspectors who monitor and regulate agricultural commodities entering the U.S., certifying they are free of pests and foreign animal diseases.

The office is "completely immersed" with USDA's Animal and Plant Health Inspection Service, which makes the rules and regulations, said Kevin Harriger, acting executive director for agricultural programs for the Office of Field Operations for U.S. Customs and Border Protection.

Most expenses are covered through user fees, he said.

"We have to be there to ensure those agriculture commodities are upheld to the standards APHIS expects us to do," he said.

The heightened security for agriculture does not stop at the border. Another critical line of defense in the effort to protect U.S. farms and ranches against foreign and domestic threats is under construction in Kansas.

The department is moving its National Bio and Agro-Defense Facility from the Plum Island Animal Disease Center in New York to the Kansas State University campus in Manhattan, Kan. Construction of the $650 million, 500,000-square-foot facility will begin in 2012. It is scheduled to begin operations in 2019.

The old center is "nearing the end of its life cycle" and is too small to meet the nation's research needs, said Chris Ortman, spokesman for the department. The old center also does not have adequate biosecurity capabilities.

"The United States needs to be on the front line of livestock animal health research and defend America against foreign animal, emerging and zoonotic diseases," Ortman said. "The facility will be a modern research facility that will protect the U.S. from threats to our animal agriculture, food supply and public health."

Among the diseases to be studied at the facility are foot and mouth disease, African swine fever, classical swine fever and contagious bovine pleuropneumonia.

Though some critics have complained that the facility, which will study the most serious animal diseases, shouldn't be built on a college campus, the department said the federal government has demonstrated the ability to safely run high-containment labs in the U.S., pointing to high-security facilities in Atlanta, Ames, Iowa, and Fort Detrick, Md.

Heightened food security is part of the center's job.

Marty Vanier, director of operations at the National Agricultural Biosecurity Center, said terrorism is a significant element of its mission, but scientists there will also focus on planning for and responding to a variety of disasters regardless of intent.

"The response to an outbreak of foot-and-mouth disease in this country will essentially be the same whether it is an accident or it's an intentional introduction by the bad guys," Vanier said.

The fertilizer industry had already gone through the turmoil of the 1995 bombing of the Federal Building in Oklahoma City, Okla. 9/11 only added to it, said Kathy Mathers, vice president of public affairs for the Fertilizer Institute, a national trade organization.

After the Oklahoma City bombing, in which 5,000 pounds of ammonium nitrate fertilizer bought from a Kansas agricultural cooperative was a main ingredient of the powerful bomb that killed 168 people, the industry worked with the federal Bureau of Alcohol, Tobacco, Firearms and Explosives to enhance retailer security, she said.

After 9/11, the focus widened to include monitoring the manufacture of fertilizer. With the formation of the Department of Homeland Security came even more security regulations, such as worker screening.

Ten years later, many of the programs are just being implemented, Mathers said. Last month, the Department of Homeland Security announced a rule requiring buyers and sellers of ammonium nitrate to register with the federal government, a move the industry supports, Mathers said.

"They ensure an added level of public safety while protecting a valuable fertilizer for its intended use," she said. The cost is being paid by the government, Mathers said, although noncompliance will result in fines.

The chemical is handled in a fashion similar to a restricted pesticide requiring licensing. Anyone who registers is screened against a terrorist watch list.

Another important fertilizer, anhydrous ammonia, is treated more as a public safety concern, Mathers said. Once released into the air, it dissipates unless weather conditions cause it to form a cloud.

Agricultural shippers have come under increased scrutiny in the wake of 9/11, increasing the price of U.S. wheat and other grains that are sold overseas.

Amer Badawi, vice president of agricultural exporter Columbia Grain at the Port of Portland, said ship owners are required to pay for increased security while their vessels are in port. Expenses include cameras, guards and fences to protect against a foreign ship entering a U.S. port carrying a bomb or other deadly weapon or a terrorist destroying port facilities.

Those expenses are added to the transportation cost, which the overseas buyer pays.

"It is a significant cost," he said, declining to be more specific.

For U.S. producers, Badawi said, higher security costs weigh against the ability of U.S. crops to compete on the international market. Any additional cost is a disadvantage for U.S. farmers, especially compared to low-priced overseas competition.

"That is the uphill battle for the U.S. producer," Badawi said.

Some of the requirements for grain terminals mirror those for oil terminals, Badawi said. There are restrictions on how crew members can access a facility or even where they can go while in port.

"We at least have some things that would prevent a dumb terrorist from doing something stupid," he said. "But a smart terrorist? Hard to say."

Lewis, chief executive of security consultancy Transnational Strategic Solutions, said most of the government's focus was on airplanes and not enough was on infrastructure or agriculture.

Today, there is renewed focus on infrastructure like railways, highways and seaports, but he estimated that less than 10 percent of shipments from overseas are inspected.

"My fear is that terrorism within the U.S. could very well be perpetrated through agriculture, through the food chain," Lewis said. "If a soft spot occurs, a terrorist is going to attack that soft spot."

Lewis pointed to the potential for a terrorism attack on farms.

"It's purely up to management," he said. "How hard is it for me to find a dairy that's putting milk out that's going to be sold to a relatively large number of people that I can inject something into the process easily? It would be simple."

The highest probability of attack is in the fields, Lewis said, because they are most vulnerable to a spray or tampering with irrigation water.

But 10 years after 9/11, is the food chain safer? Badawi paused for a moment before responding.

"One would want to say yes, but if you think about it for a minute, you wonder if it is," he said. "The system we have in place for food security has not been tested. You wonder what we might be lacking."