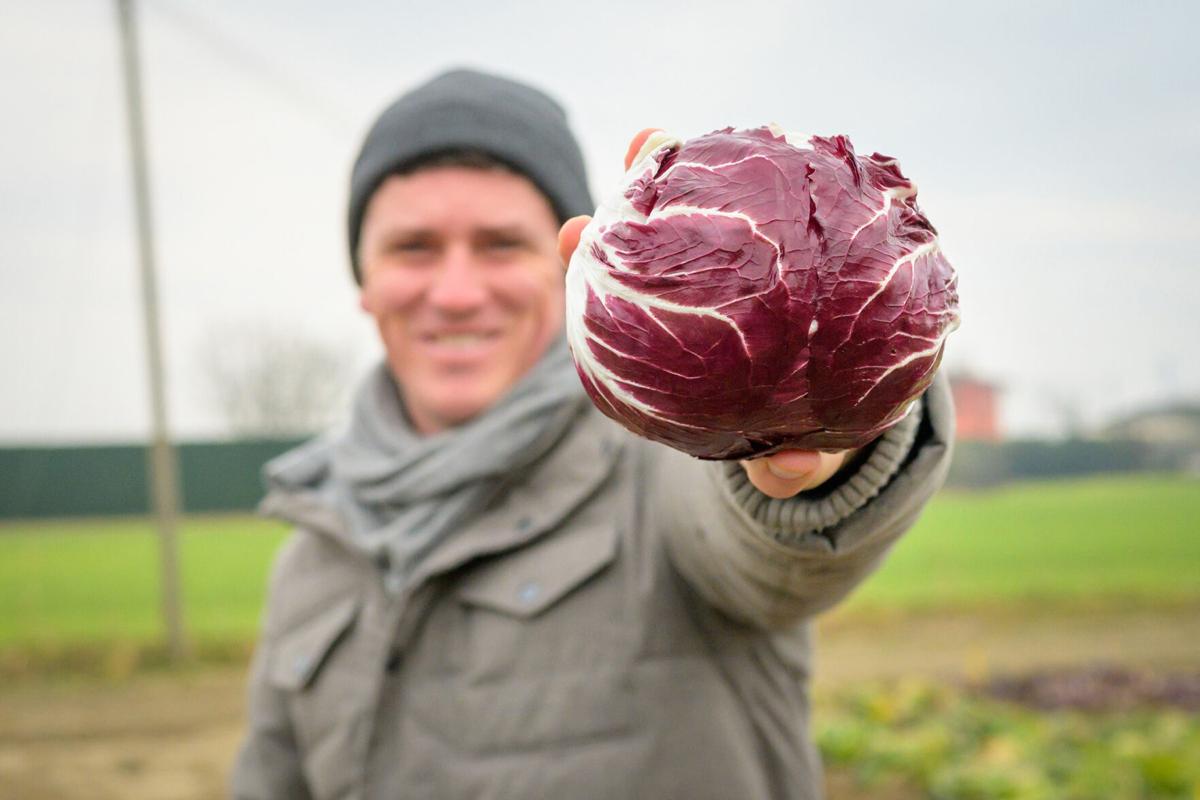 Radicchio is the focus of a new effort to spark interest in the vegetable from farmers, chefs and consumers. 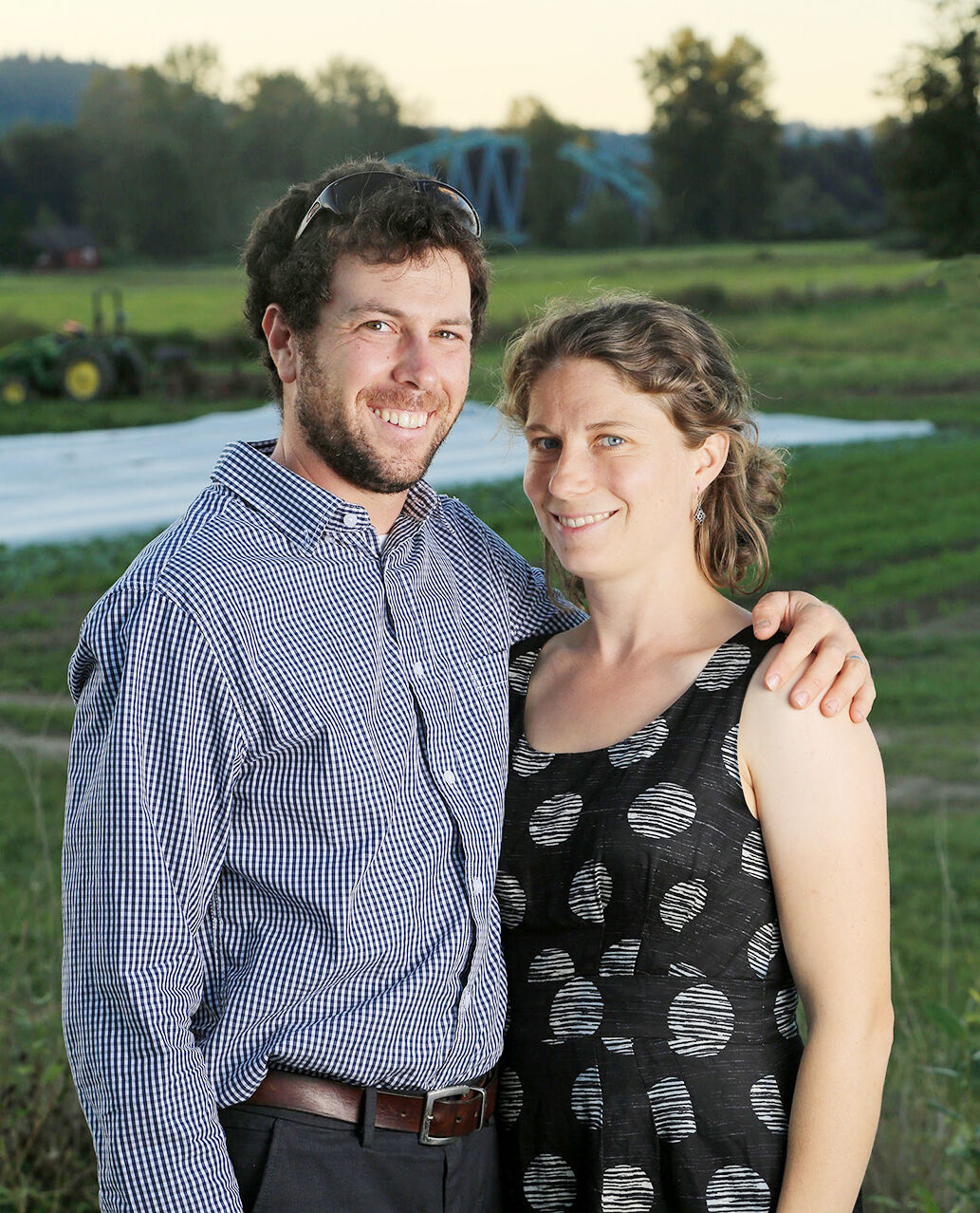 Farmers Jason Salvo and Siri Erickson-Brown of Duvall, Wash., are helping lead the formation of the Pacific Northwest Radicchio Growers Association. They’ve been raising the crop for 15 years, 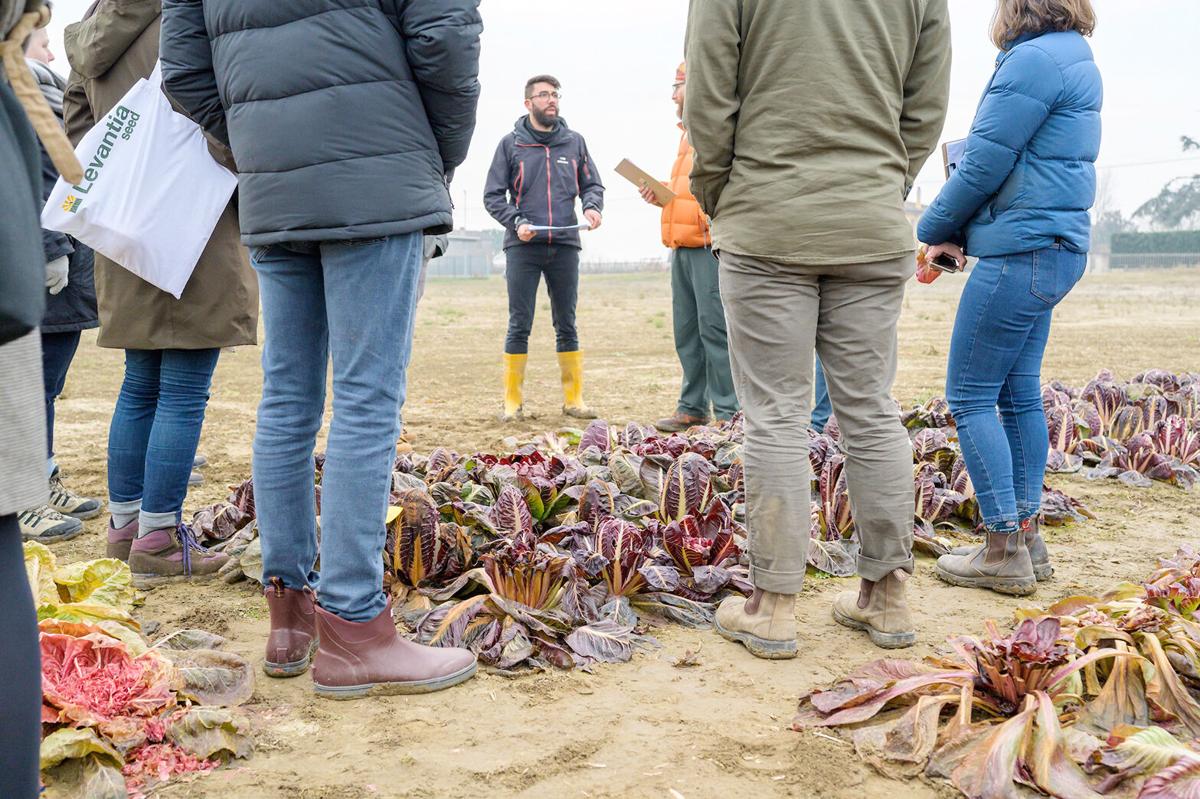 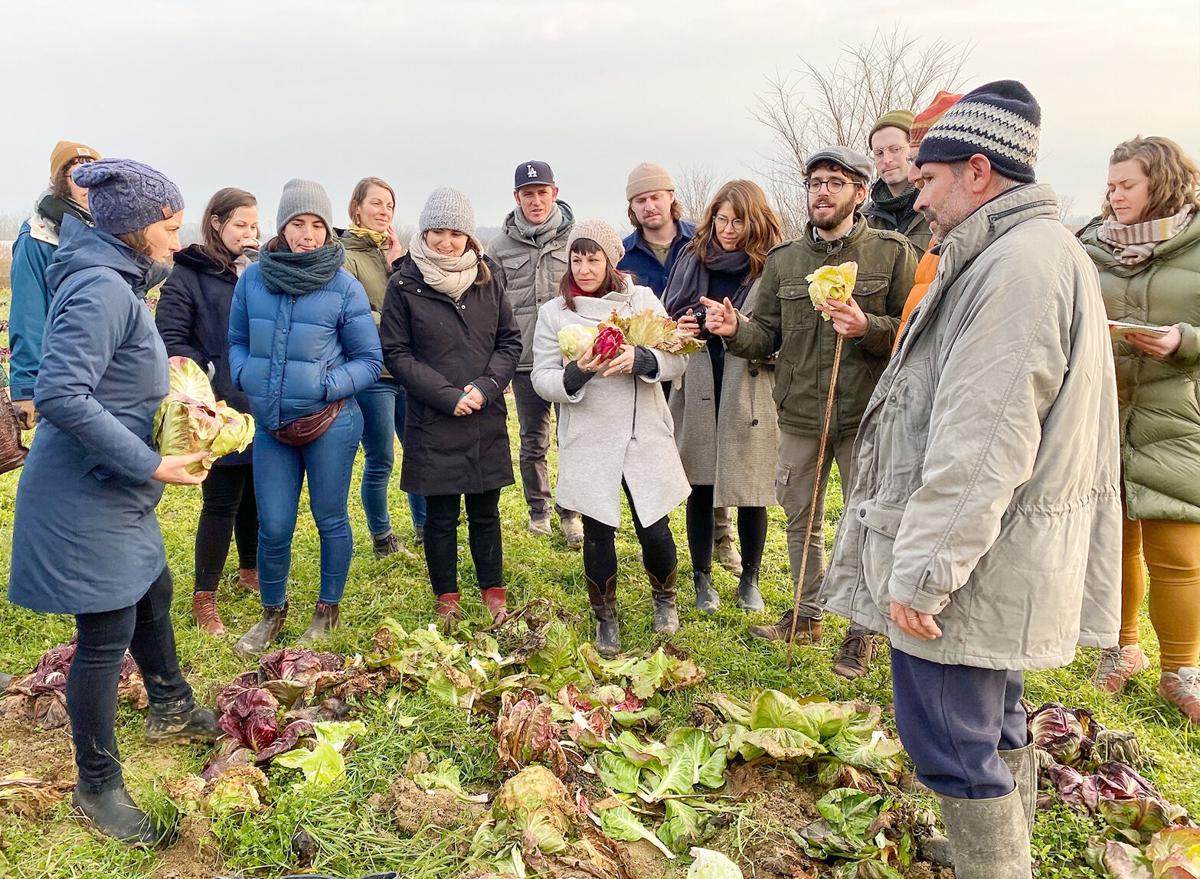 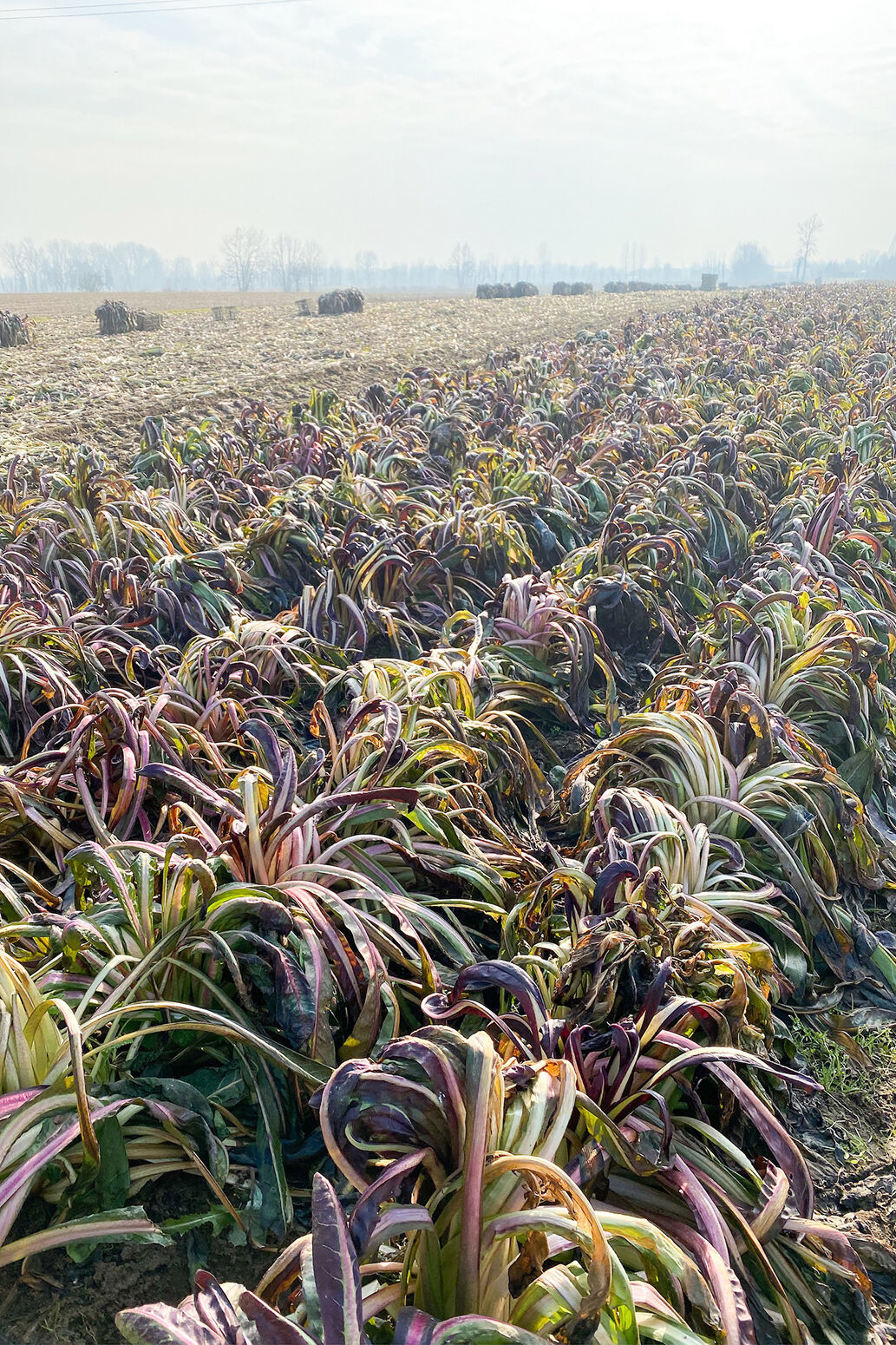 A radicchio field in January. 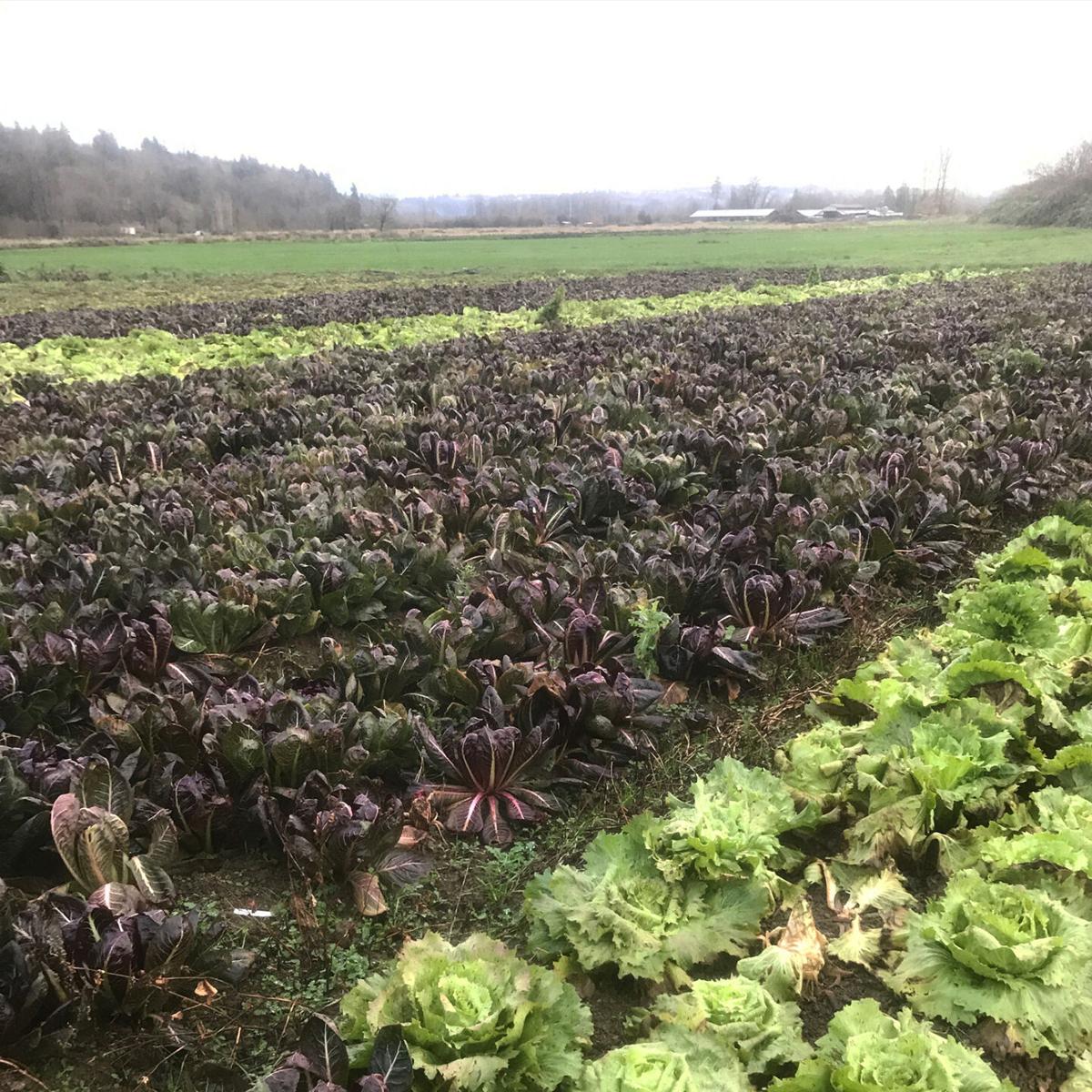 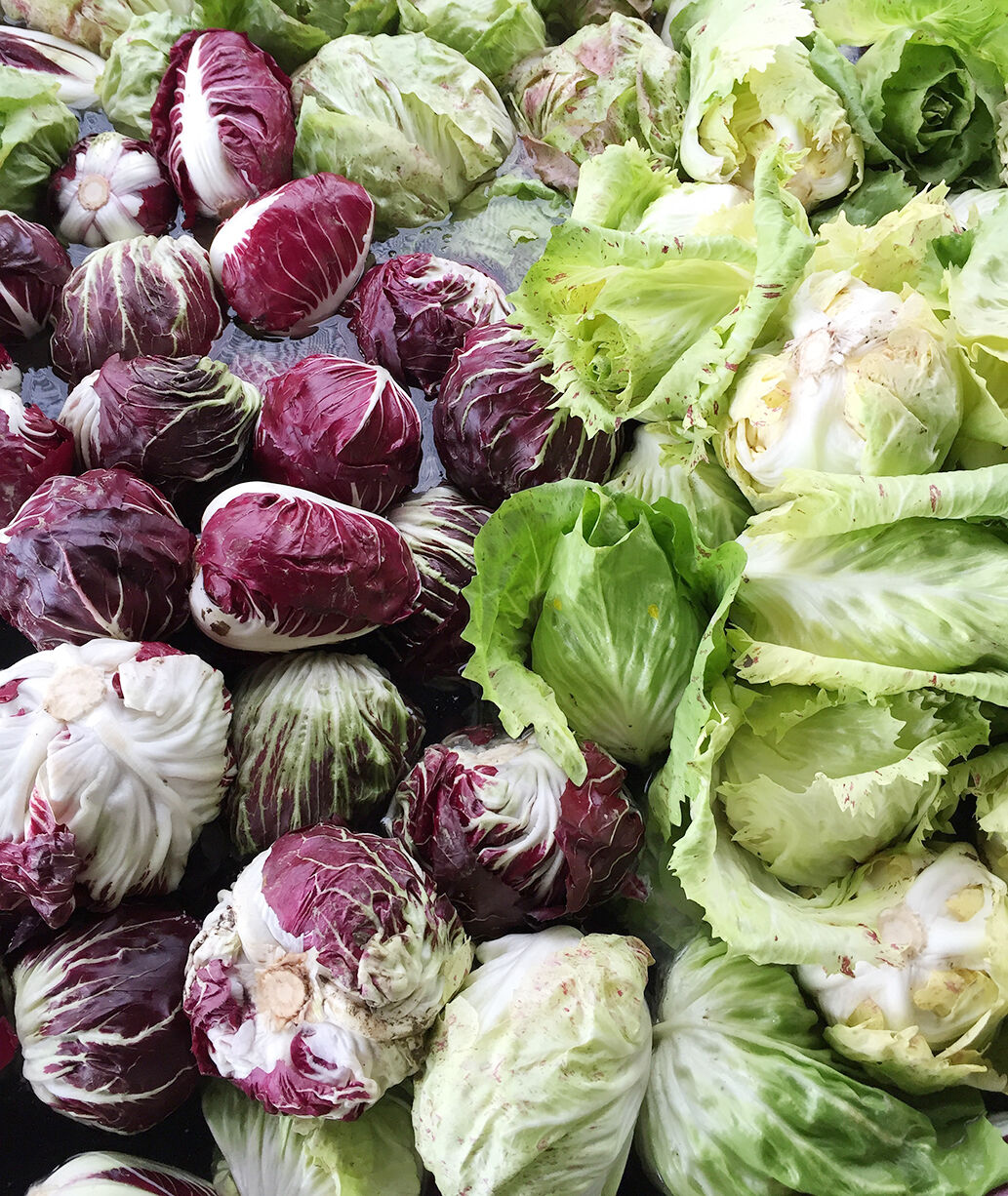 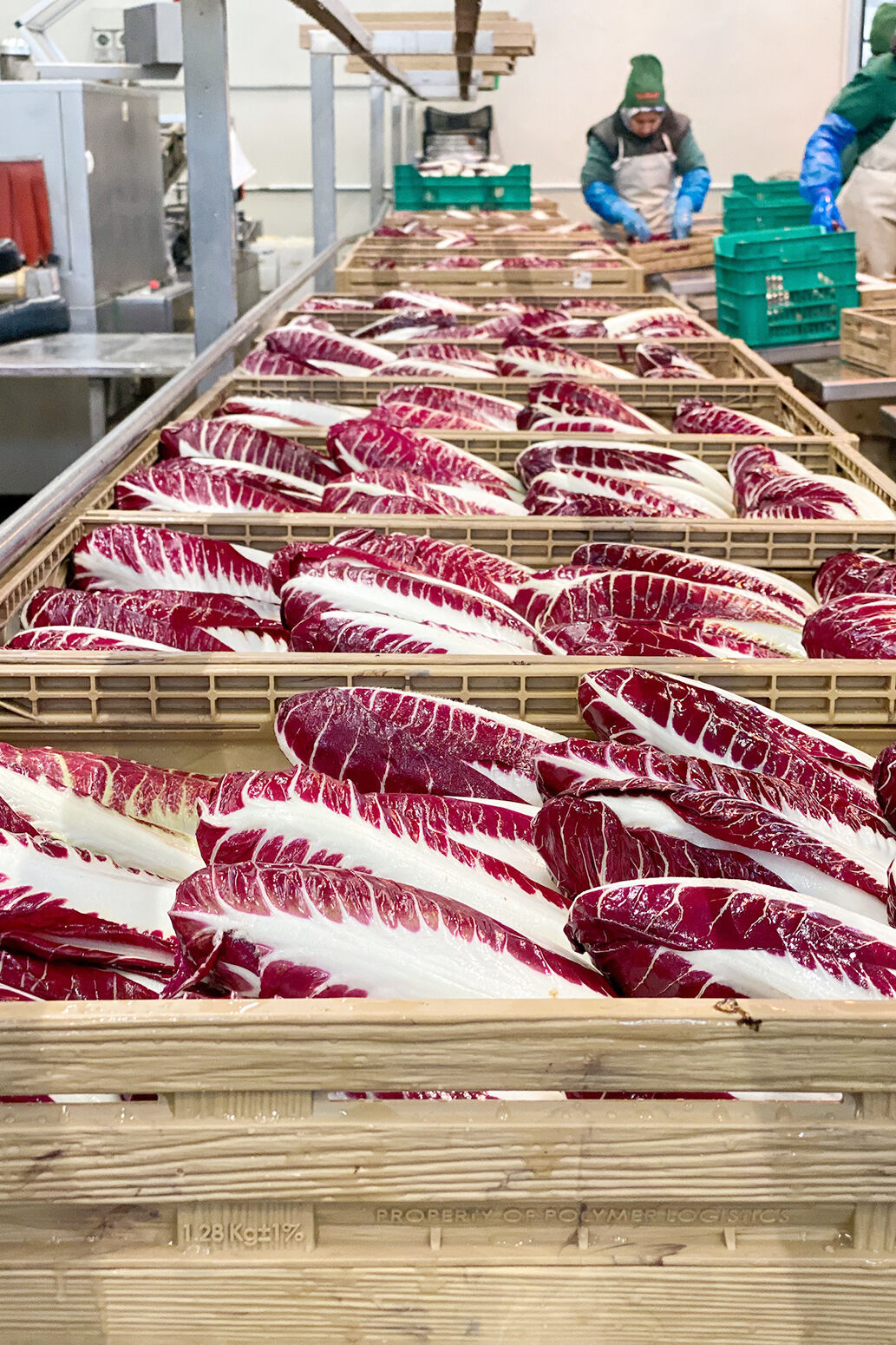 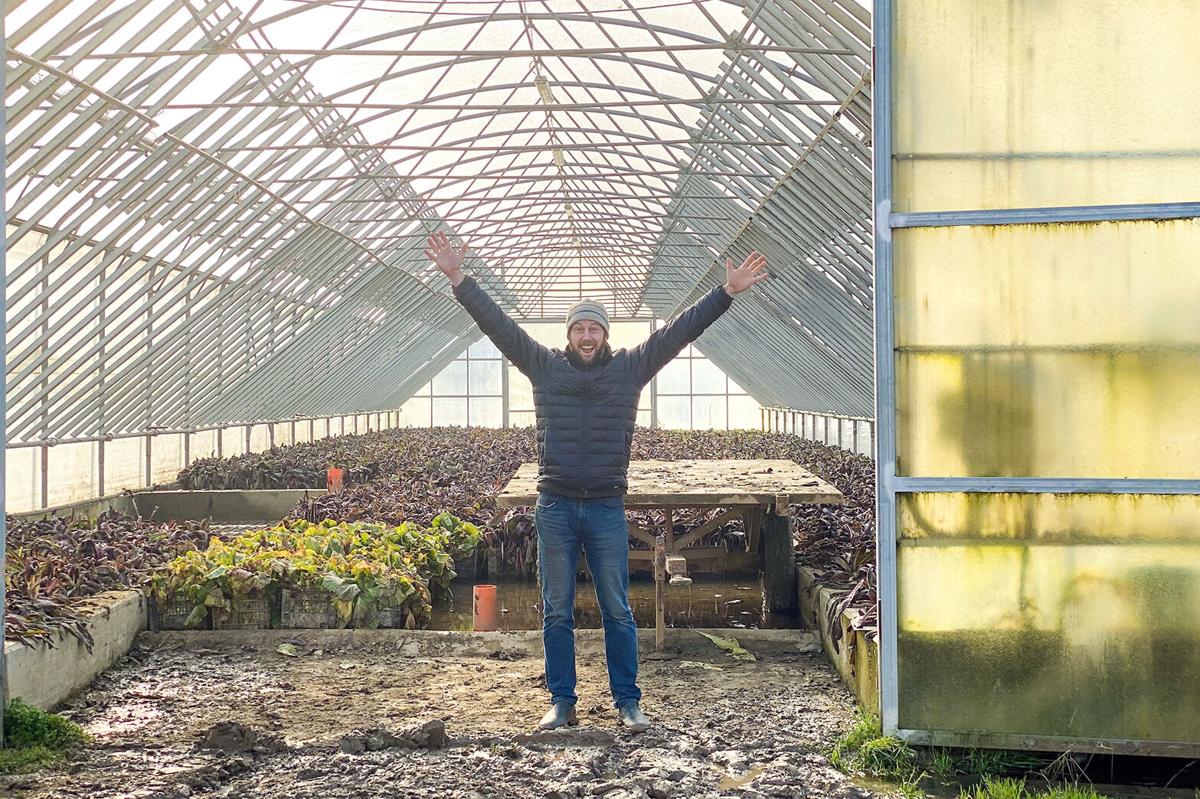 Duvall, Wash., radicchio farmer Jason Salvo in a greenhouse during a tour of the industry in Italy. 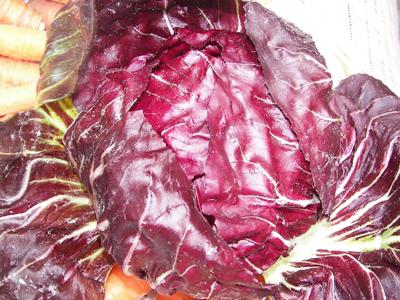 Radicchio is the focus of a new effort to spark interest in the vegetable from farmers, chefs and consumers.

Farmers Jason Salvo and Siri Erickson-Brown of Duvall, Wash., are helping lead the formation of the Pacific Northwest Radicchio Growers Association. They’ve been raising the crop for 15 years,

A radicchio field in January.

Duvall, Wash., radicchio farmer Jason Salvo in a greenhouse during a tour of the industry in Italy.

Siri Erickson-Brown first fell in love with radicchio while she and her husband were working on farms in Europe in the early 2000s.

They ate a lot of the red winter vegetable while in Italy, where it is commonly grown.

“What is this weird vegetable that everybody says is so hard to grow?” she recalled wondering.

Radicchio is a leafy chicory, often used to add color to salads.

And, by all accounts, radicchio is an acquired taste. It’s bitter, which means customers need some education and recipe examples from chefs, said Laura Lewis, who runs Washington State University’s Food Systems Program.

“You may not necessarily want to have a straight-up radicchio salad,” Lewis said. “But there are some beautiful radicchio salads that you mix with things like citrus.”

Erickson-Brown compares radicchio to a hoppy beer, dark chocolate or coffee — the taste is hated by kids but loved by adults.

“It starts out as something that seems horrible, but then it’s your favorite thing,” she said. “Radicchio is like that.”

Radicchio proved to be an important crop in 2007 when Erickson-Brown and her husband, Jason Salvo, started their 15-acre farm, Local Roots Farm, in Duvall, Wash.

“For a farm that grows 40 different crops, to have 1 acre dedicated to just one is a little unusual,” Erickson-Brown said.

The growing popularity of the little-known crop prompted the couple to help lead a regional effort to raise the crop’s profile by establishing the Pacific Northwest Radicchio Association.

Geography is on their side. Radicchio is widely grown in northeastern Italy, whose latitude and climate are comparable to those of the Pacific Northwest.

There’s a lot for farmers to like about radicchio, Erickson-Brown said. It’s a winter-hardy crop, and improves soil health by breaking up pest and disease cycles as an alternative to Brassica crops, such as cabbage, kale and Brussels sprouts.

Radicchio also overwinters in the field and holds up well in storage, making it a locally grown winter salad alternative to lettuce shipped from warmer climates.

The new organization will bring together growers, processors, wholesalers, distributors, retailers and restaurants in Oregon and Washington.

Lewis and Selman received a $250,000 USDA specialty crop block grant in 2020 through the Washington State Department of Agriculture.

• Offer educational and culinary events, including a radicchio grower’s symposium and field days and expand an annual Seattle radicchio festival with events in Spokane, Bellingham and Walla Walla.

• Develop an international exchange between association members and Italian farmers, breeders, seed dealers and experts to boost production in the Northwest.

A California-grown, round, red Chioggia type is the radicchio most commonly found in U.S. grocery stores.

Erickson-Brown envisions the association as a marketing board, promoting Pacific Northwest-grown radicchio and building interest.

The organization could potentially sell into East Coast urban markets that now import radicchio from Italy and elsewhere.

“We know there are people willing to pay a pretty high price to get this special Italian radicchio,” she said. “As long as we’ve already got trucks bringing Washington apples to the East Coast, wouldn’t it be great if we could also throw a few pallets of radicchio on there?”

Erickson-Brown hopes to hear from other growers about the organization.

“What we don’t want to do is miss anybody,” she said. “We know a lot of small farmers are growing radicchio that may or may not be on our radar right now.”

She welcomes growers who want to sell radicchio locally and those who aspire to ship their crop overseas.

Italian marketing associations have identified China, Japan and the U.S. as the biggest potential markets, she said.

“We’re going to start to take roll and figure out who wants to figure this out with us,” she said.

Fast-growing cropIt’s not clear how many Northwest growers are actually raising radicchio, Selman said. The USDA doesn’t collect that information. The association will likely measure production and market demand, she said.

Lewis predicts 35 to 50 growers will be involved in the organization.

From experience, Erickson-Brown sees great potential for radicchio. Her farm reported a 900% increase in production and sales over the last decade, with sales doubling in 2019 alone compared to the previous year.

“The market for these crops — especially radicchio, chicory, spinach and purple sprouting broccoli — is expanding faster than any of us can keep up with,” Navazio said.

Cultural exchangeA major selling point for the Northwest effort is the opportunity to work with Italian farmers and breeders, Lewis said.

In January 2020, a group of farmers, chefs and researchers traveled to Italy for a “radicchio expedition.” They toured farms, seed companies and breeding programs.

Participants paid their own way, Selman said. The grant would fund the next expedition, although it will be a smaller group more focused on documenting growing methods to share with Northwest farmers, she said.

Just as important, Lewis said, is bringing Italian growers and breeders to the Pacific Northwest.

Many varieties are grown in several regions of Italy, but used only for one dish or a particular way, Lewis said.

“We’re not set in stone how we’re going to use this crop,” she said. “They were like, ‘We need your innovation to expand our Italian markets as well.’”

Andrea Ghedina is co-founder and breeder for Smarties.bio in Chioggia, Italy, near Venice. His company sells conventional and organic radicchio seeds. He’s been breeding radicchio for 10 years.

Radicchio is not considered a specialty crop in his region, he said.

“It’s something we know very well, it’s not so romantic for us,” Ghedina said.

Scientifically, however, the crop offers genetic variation and is still relatively new, he said. It was bred from wild chicory into its current red, round shape about 70 years ago.

Radicchio contains antioxidants and vitamin C in quantities significantly higher than other fruits and vegetables, even oranges, Ghedina said.

Ghedina will offer his expertise to Northwest growers. He wants to collect as much data as he can to breed new varieties.

He believes less bitter varieties would find larger markets, even in Italy.

‘Rad TV’The annual fall festival, Sagra del Radicchio — Italian for the Festival of Radicchio — drew roughly 325 people to Seattle in its first two outings, in 2018 and 2019.

Last year, because of the coronavirus shutdowns, the virtual alternative, “Rad TV,” drew 1,345 same-day viewers in November and a total of 2,500 views.

About 44% were consumers and home cooks, 36% were farmers and ag industry members, and nearly 8% were involved in restaurants and the hospitality industry. The rest didn’t specify their affiliation.

People in 13 countries registered. About 74% of the viewers were in the U.S.

Organizers want to return to in-person events, Selman said, but “I think we would actually consider doing it also virtually.”

Next stepsThe association will meet for the first time in March. The goal is to have the organization running in the next few months, Lewis said.

Any international exchanges may be modified or delayed due to the pandemic, she said.

In the meantime, Erickson-Brown wonders how COVID-19 will impact demand as she decides what to plant for the coming growing season. Each year, they’ve increased their radicchio crop by 25%, and have always sold it all, she said. About 90% of it goes to restaurants.

Early on, at farmers markets and restaurants, she would often hear how hard it was to find, she recalled.

That showed her the enthusiasm is there for radicchio.

“You don’t need to grow something that appeals to everybody,” Erickson-Brown said. “You just need to do a really good job of growing something that’s meaningful to enough people that makes it worth doing.”

Radicchio at a glance

Radicchio (ruh-dee-kee-oh) is part of the chicory family.

Though it's been around since the 1500s, the most popular red variety, Chioggia, was bred in the 20th century.

A winter crop, it originated and is still widely grown in Italy, which has a climate and latitude similar to the Pacific Northwest. It overwinters in the field and holds well in storage.