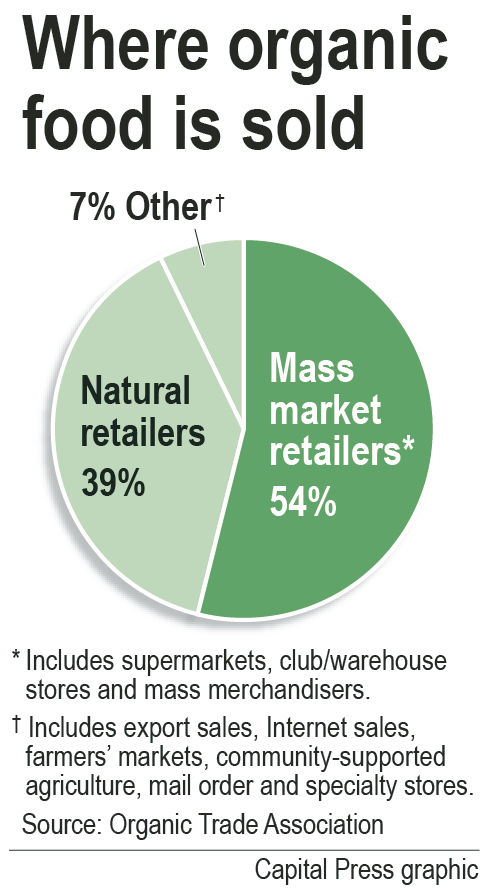 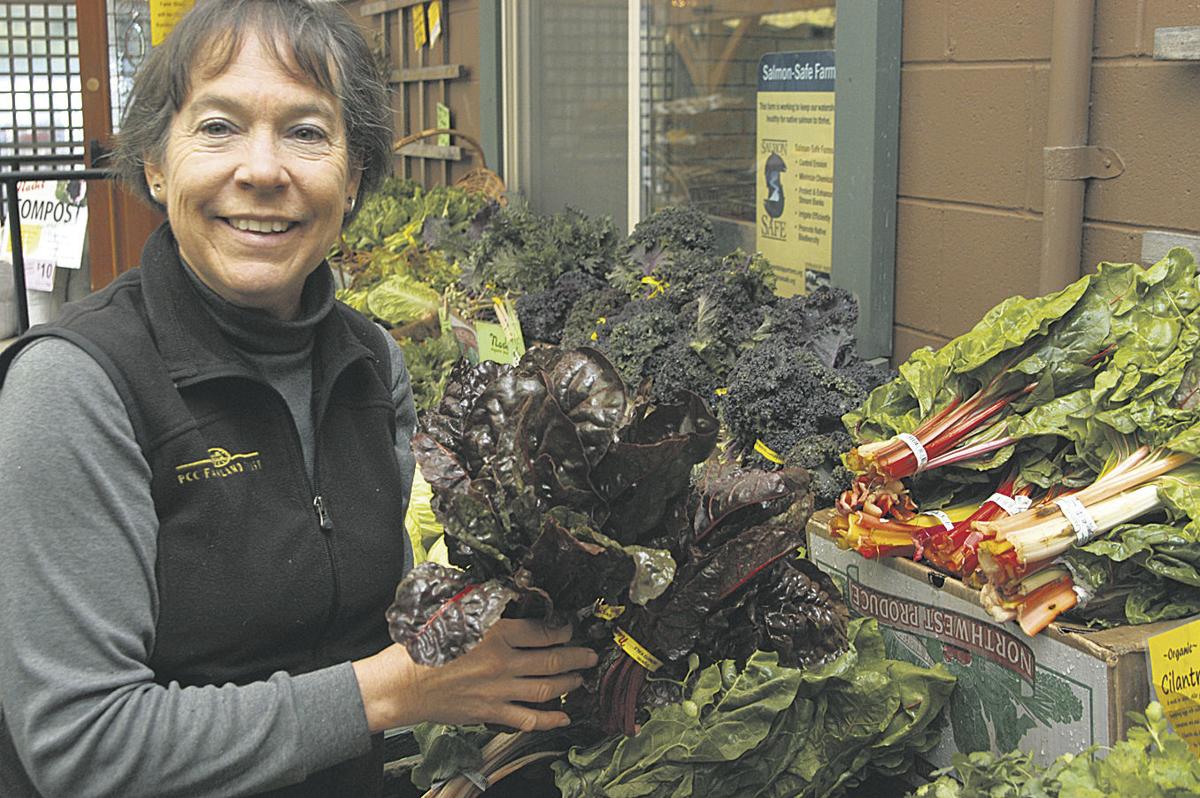 Steve Brown/Capital Press Patty McManus-Huber, co-owner of NashÕs Organic Produce in Sequim, Wash., arranges some of the late-winter produce at the farmÕs store. The store includes produce from a half-dozen other nearby farms, but during the summer 90 percent or more comes from NashÕs farm.

Steve Brown/Capital Press Patty McManus-Huber, co-owner of NashÕs Organic Produce in Sequim, Wash., arranges some of the late-winter produce at the farmÕs store. The store includes produce from a half-dozen other nearby farms, but during the summer 90 percent or more comes from NashÕs farm.

Growing organic food is big business. Nearly 18,000 certified farms in the U.S. accounted for $26.7 billion in food sales in 2010, according to the Organic Trade Association.

Organic farms can be big, too, up to thousands of acres.

But can an organic farm be too big?

The answer, according to farmers and others involved in organic production, is "it depends." While some large farms meet the letter and spirit of the USDA's National Organic Program, critics argue that others -- even those that are certified -- don't.

Organic farming started with a few labor-intensive, small-scale enterprises, often marketing to the local population through farmers' markets and farmstands.

As the popularity of organic food has grown, many of those small farms have grown in acreage, and major food corporations have added organically grown produce and dairy products to their lineups.

That is where the problems started, one organic watchdog group maintains. Wisconsin-based Cornucopia Institute has often called large farms to task, challenging their organic claims.

The reason, said Mark Kastel, the institute's senior farm policy analyst, is a matter of enforcement.

Organic standards are scale-neutral, he said, but if they were adequately enforced, they would be scale-limiting. For instance, organic standards call for dairy cattle to have free access to pasture.

"Lots of operations are milking up to 5,000 or 10,000 cows three times a day," he said. "We don't think you can move thousands of cows from pasture to milking even twice. Some cows would have to be walking for miles in rotating pastures."

Some organic-certified Cornucopia members milk 500 to 1,000 cows, proving it can be done, he said, but he doubts other larger farms can meet the standards.

Large vegetable growers may be following organic rules, but Kastel questioned whether they're following the spirit of organics.

"It's a lucrative industry," he said, "and we're selling the story behind the food. If you talk to organic consumers and ask what they think organic farms look like, larger farms won't conform to their expectations. People think they're supporting a different environmental ethic, better animal care."

Such farms aren't bad because they're big, but because they eliminate opportunities for small, family-scale farms, he said.

"If farmers are squeezed out of business, and a farmer is someone sitting in front of a computer and the people in the field are immigrant workers, that's not the economic and social justice people are paying a premium for," he said.

The USDA, in its National Organic Program regulations, defines organic agriculture as "a production system that ... respond(s) to site-specific conditions by integrating cultural, biological and mechanical practices that foster cycling of resources, promote ecological balance and conserve biodiversity."

That definition does not address scale, said Soo Kim, a public affairs officer at the USDA Agricultural Marketing Service, which oversees the NOP. "We are not size-specific. The standards are applied uniformly."

Each producer writes and follows an Organic System Plan, which is an agreement between the farm and the certifying agency on how the farm will achieve and maintain compliance with NOP regulations. The plan is updated annually, or whenever changes are made to the operation, including the addition of acreage under organic production.

The decertification of a farm has never been the direct or indirect result of its size, Kim said. "Enforcement action strictly has to do with not matching some aspect of the standards."

Regarding large dairies, organic standards do not require access to pasture "two or three times a day," she said. The rule, which took effect in June 2011, requires that organic livestock graze on organic pasture for at least 120 days per year and that at least 30 percent of their dry matter intake is from grazing on pasture during the grazing season.

"There haven't been any cases of livestock operations losing their organic certification for failing to meet these standards," she said. "Certification is available to all operations that meet the standards. The standards are what we enforce."

Large livestock operations have been cited for noncompliance for not providing necessary documentation and selling cows as organically raised when they were not, as reported previously by the Capital Press.

Organic farmers differ on the question of size.

Sarita Schaffer, whose 33-acre Viva Farms in Skagit County, Wash., is an incubator for small organic farms, said she doesn't think there's a size limit, but relationships change as an operation gets larger.

"Organics is about mimicking natural cycles, and there's no reason you can't meet those," she said. "But a sense of community can be lost in larger scales."

When a farmer chooses to be in meetings rather than out on the land, that's a different management strategy altogether, she said.

Schaffer said if one farm is so big it wields market power and exerts control over suppliers upstream and downstream, that challenges fairness in production and distribution.

"Real organic farming is maintaining a high level of diversity in crops and in suppliers," she said. "There's a temptation to take advantage of economies of scale. We stress interdependence in sharing equipment, sharing customers. That's the fabric of our program."

"Some people consider us to be a large-scale organic farm, and we're certainly not (if we're) compared to some farms," she said. "Less than 100 acres are in vegetables any given year. Other acreage is in grain, pasture, fallow field and wildlife habitat. Since we have a lot of acreage, we're able to to be diversified and balanced. If we had only 5 or 10 acres, we couldn't do that."

Nash Huber, co-owner of the farm with his wife, Patty McManus Huber, said as a few farms have grown to dominate the wholesale organic market, "we small guys are going to be left by the wayside."

In response, Nash has scaled back on the wholesale side of his operation.

"Our future is retail, local," he said.

Big producers are good for consumers and good for the land, he said, "but I don't think what they're doing is sustainable."

Some California farms set the price point for the country, Armstrong said. "They have efficiencies in their systems we can't touch."

One of those California operations is Earthbound Farm, based in San Juan Bautista. Drew and Myra Goodman started with a 2.5-acre garden in 1984. In 1986, they became the first company to successfully market prewashed, packaged salad for retail sale.

However, it's not just one farm, but 200 different farms ranging from 5 acres to 680, each independently certified organic, she said.

"Some we own and manage ourselves," she said. "Others are long-term partnerships."

Because so much of California's prime farmland is already in conventional crops, any large organic production has to be more of a patchwork, she said.

Keeping organic certification as the farm expanded required a commitment "not just to abide by the technical requirements, but to believe in the principles of organic farming," Cabaluna said. "You can't take the way you farm conventionally and just swap out the inputs. You have to focus on soil tilth and do everything you can to improve the rich, live, ecologically healthy soil. Farmers have seen better yields the longer it's in organic production."

Some farmers weigh the cost and returns of organic and conventional production and do both.

Since 1937, Sakuma Brothers has been expanding near Burlington, Wash. The farm, originally 40 acres, now has 1,100 acres in production, raising strawberries, blueberries, raspberries and apples both organically and conventionally.

In balancing the two types of production, Steve Sakuma, one of the owners, said: "We look at it from a business perspective. Capacity is the issue. What is the margin, the differential between the two?"

Another factor in deciding between conventional and organic farming is whether there is a market for one type of crop or the other, he said.

When the Sakumas started growing organic crops, they didn't totally understand the requirements. Over time, he said, they have brought their newly gained experience into play.

"We have expanded on a feeling of comfort, minimizing risk and maximizing profits," he said.