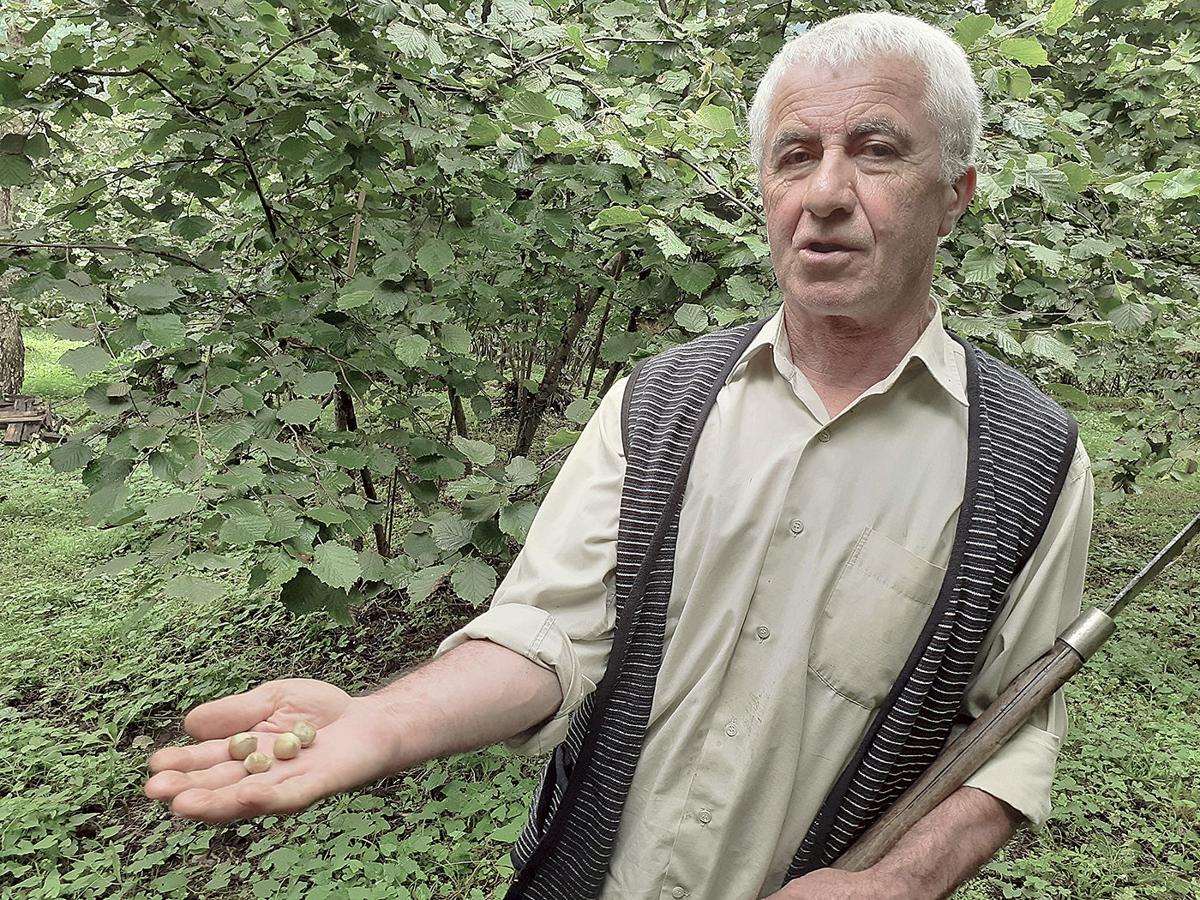 Aslan Karaca shows a hazelnut from his orchard in Giresun, Turkey. 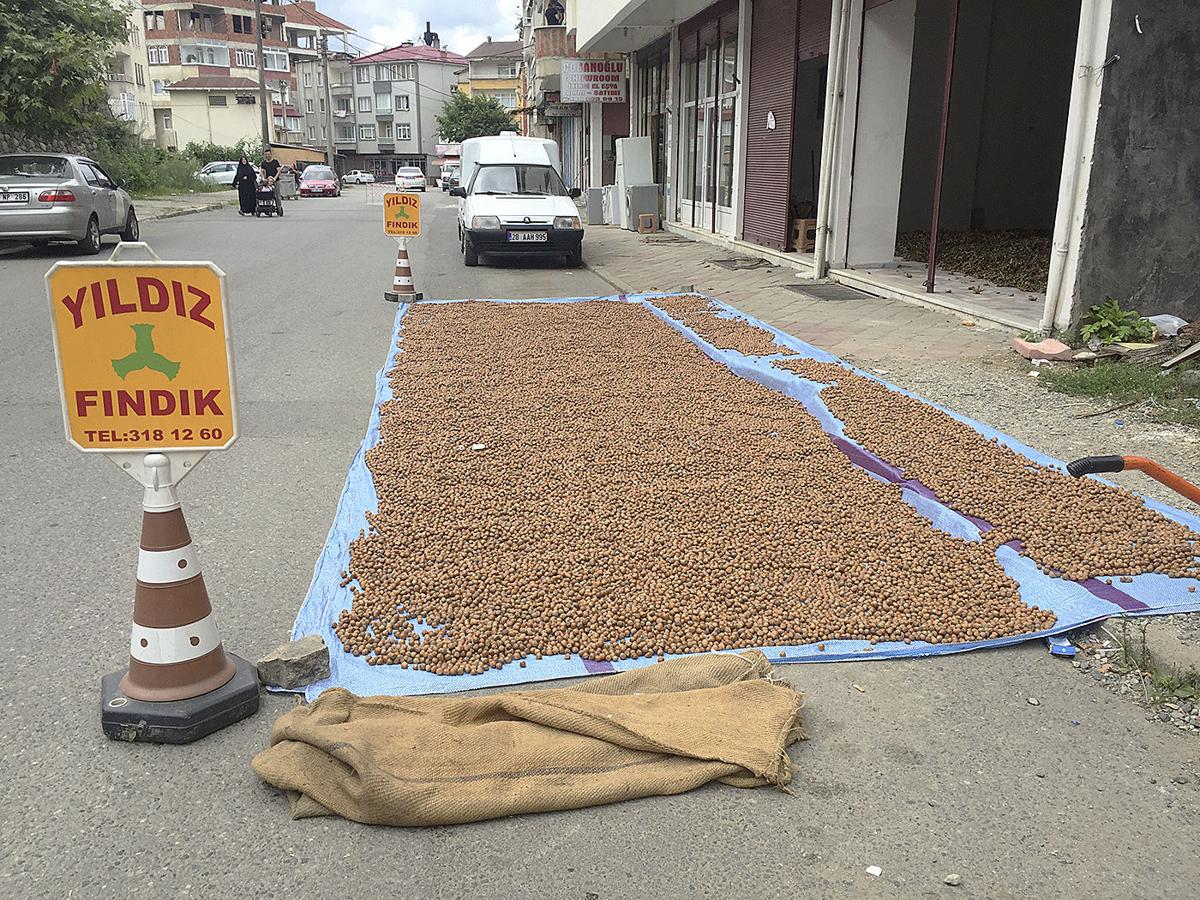 Hazelnuts drying on a sidewalk in Bulancak, Giresun, Turkey. Hazelnuts are among the commodities China is buying from Turkey. 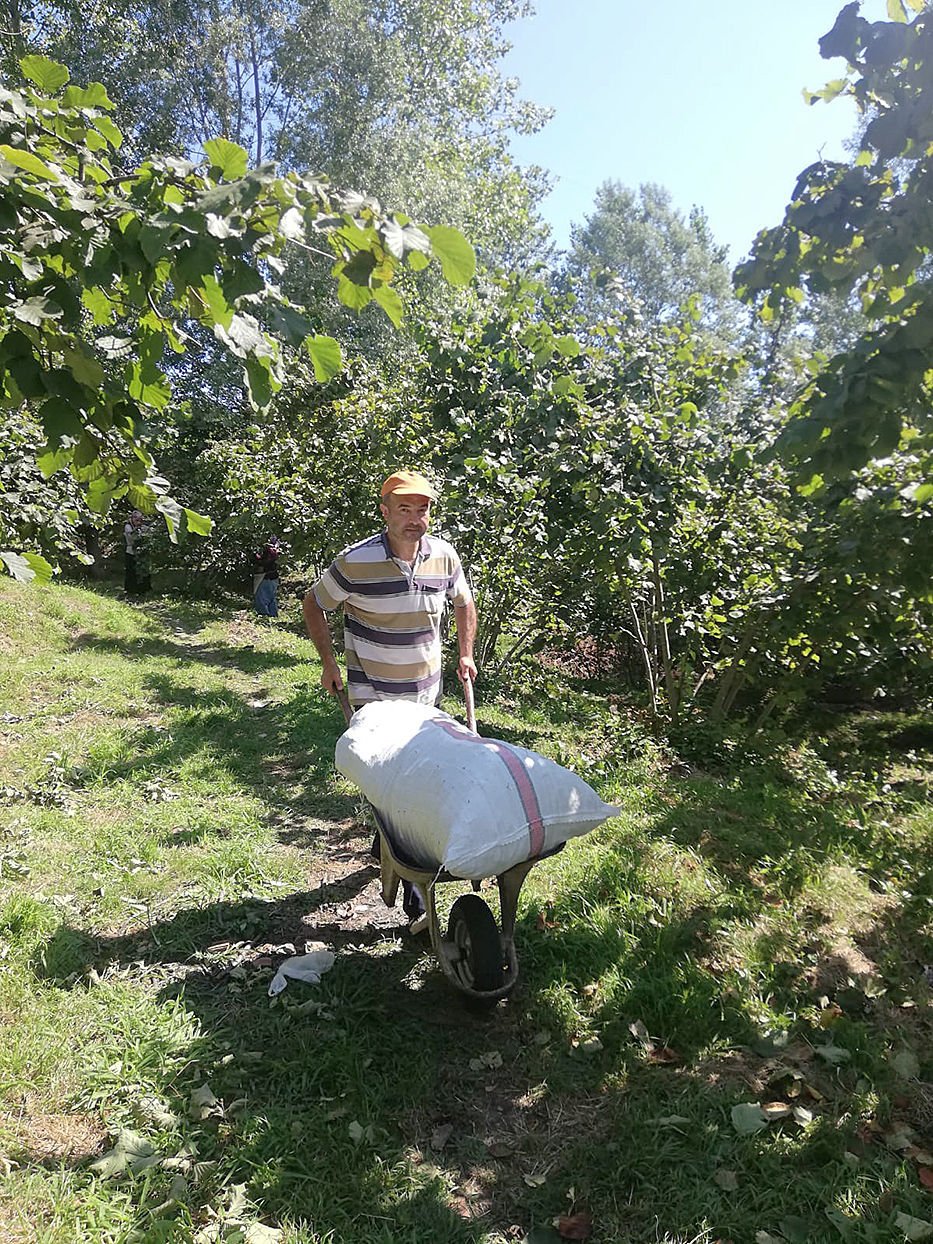 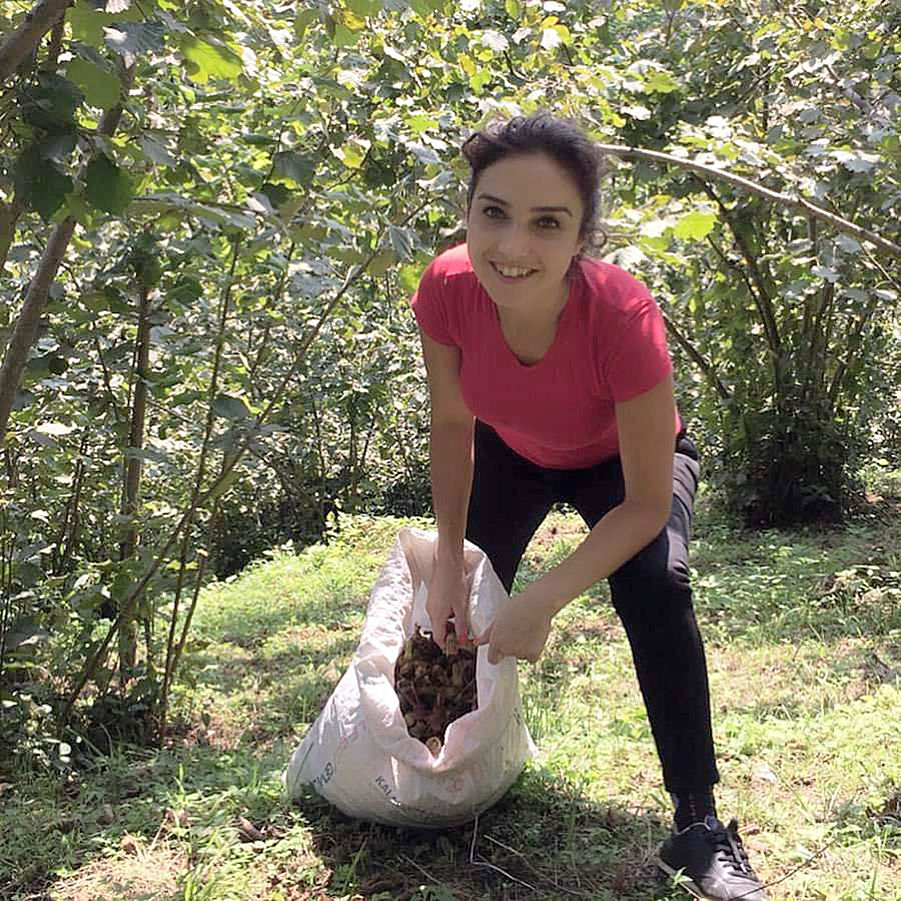 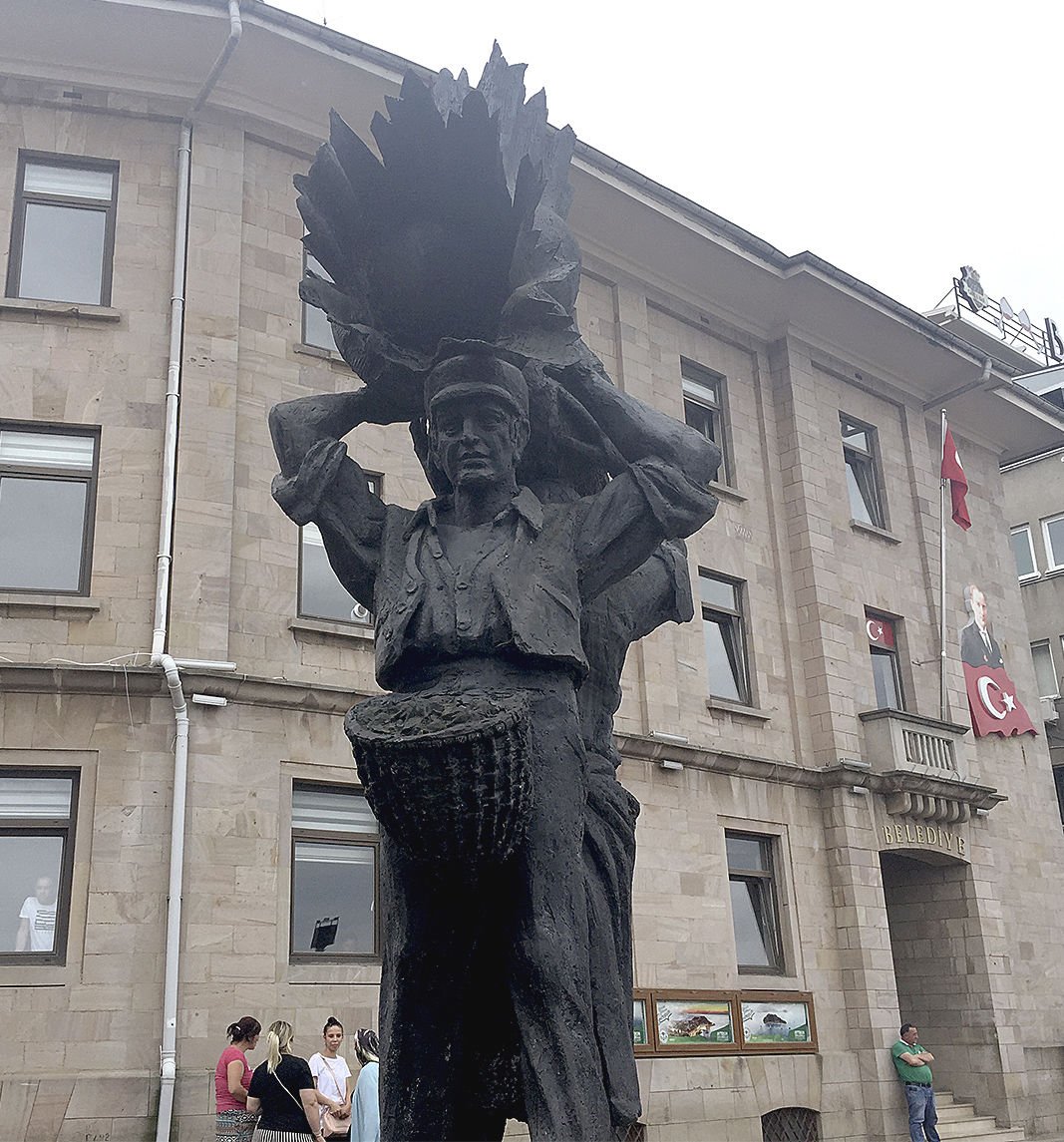 Sculpture of a man and woman carrying a giant filbert on their heads in the city center of Giresun.

Aslan Karaca shows a hazelnut from his orchard in Giresun, Turkey.

Hazelnuts drying on a sidewalk in Bulancak, Giresun, Turkey. Hazelnuts are among the commodities China is buying from Turkey.

Sculpture of a man and woman carrying a giant filbert on their heads in the city center of Giresun.

GIRESUN, Turkey — In an elementary school yard in the tiny Black Sea village of Bulancak in northeast Turkey, two workers spread out hazelnuts to dry in the parking lot.

In front of them is the seaside and behind them are seemingly endless verdant hillsides blanketed by hazelnut orchards.

Turkey leads by large margins every nation in the world in both hazelnut production and exports. The country, straddling Asia and Europe, produces and exports more than 70% of the world’s hazelnuts.

Between last September and August of this year, Turkey exported 263,212 tons of hazelnuts, worth nearly $1.6 billion, according to Fiskobirlik — the Hazelnut Agricultural Sales Cooperatives Association — based in the Black Sea province of Giresun.

An estimated 50,000 to 60,000 tons, worth more than $400 million, are sold on the domestic market, said Salih Ogutken, deputy general manager of Fiskobirlik.

“When you combine both markets (export and domestic), it reaches a volume of about $2 billion,” Ogutken said.

Inside Turkey, the Black Sea region produces the lion’s share — about 65% — of the helmet-shaped nuts, known also as filberts, or “fındık” in Turkish, according to the Turkish Statistical Institute. The Black Sea province of Ordu alone produces 35% of the country’s total yield.

The first record of hazelnuts in present-day Turkey dates back at least 300 years before Christ, Koksal wrote.

Today, nearly 1.8 million acres in Turkey are planted to hazelnuts, according to the country’s statistical institute. As a contrast, about 70,000 acres of hazelnut trees are planted in Oregon, by far the top U.S. producer of the crop. About 1.2 million acres of almonds grow in California.

Each acre of hazelnut orchards contains between 200 and 280 trees and produces 440 to 1,060 pounds of shelled nuts, Ogutken said.

There are approximately 410,000 hazelnut producers registered in the country through its farmer registration system, but there are also an estimated 40,000 producers, mostly small landowners, who are not registered, often because they inherited land that was divided among siblings and want to avoid the paperwork to register with the state, he said.

The country grows 17 types of hazelnuts, some of which are combined in orchards to encourage pollination, according to Koksal. Anatolian species include the corylus avellana L. (common hazelnut), maxima mill. (giant filbert), pontica c. koch (Mediterranean hazelnut) and corylus colurna L. (Turkish hazelnut).

The hazelnuts grown in Giresun province are considered the best in the world in terms of quality, taste and aroma, said Kubilay Yaman, an international nut and seed broker based there.

The Tombul, also known as the Giresun oily hazelnut, is a round nut with a high fat content, which lends its rich flavor. The variety accounts for the majority of hazelnuts grown in Giresun province, but farmers also grow two other varieties that are popular — the “black” Kalinkara hazelnut and the pointed Sivri hazelnut.

While the Tombul is susceptible to spring frosts and big bud mites, the pointed Sivri hazelnut — a novelty to North America — is resistant to pests and diseases and to spring frosts.

Ashing disease and brown “skunk,” which dries out trees and can stop production for a season, are other threats to the country’s hazelnut crop, though Fiskobirlik had no statistics on losses from the diseases. Both problems are resolved through spraying and have been addressed through government strategic plans, Ogutken said.

Despite the mechanization of hazelnut harvests in other parts of Turkey and of the world, Giresun and Ordu residents still collect filberts the way they have for thousands of years. Most of the orchards have been in families for generations, Ogutken said. Locals and workers, who migrate from southeast Turkey for the harvest season, hand-pick the nuts, collecting them into baskets, said Gurhan Eriş, whose family owns hazelnut trees in Ordu.

A machine can collect roughly six times the amount of nuts as pickers, he said.

“When you pay for the machine, you pay only once, and it gets your money back in five years,” he said.

Farmers in Ordu and Giresun stick to this ancient method of harvest because the trees grow on steep slopes, unconducive to sweeping machines and other types of automation, said Aslan Karaca, a retired primary teacher who has a hazelnut orchard in Giresun.

“The geographical conditions are harsh,” said Karaca, whose hazelnut orchards have been in his family for generations. “The terrain is rough and steep. There are not roads everywhere.”

In some villages such as Bulancak in Giresun, where Eriş lives, producers prefer to allow the hazelnuts to drop from their branches and then collect the nuts from the ground.

Shaking the tree to harvest the nuts is a method used in northwestern Turkish provinces such as Sakarya, Duzce and Kocaeli, Eriş said.

In August of each year, farmers use every possible flat surface to dry the harvested hazelnuts, including driveways, sidewalks and as in Bulancak, school parking lots. Once the husks turn brown, usually after four to five days, farmers rent what they call a “peeling machine,” which vacuums the nuts into a long tube and removes the husks, said Ihsan Bulent Yuce, Eris’ uncle, who is a co-owner of an orchard in Ordu.

The peeled nuts, still in their shell, are then laid out to dry for another three to seven days, depending on the weather, before they are delivered to markets or processing plants, he said.

Most nuts go to EU

More than 75% of Turkish hazelnut exports go to the European Union, according to August statistics from the Black Sea Hazelnut and Products Exporters’ Union.

About 42.7% of those exports were processed products while the rest were raw nuts, the exporters’ union reported.

About 90% of residents in Ordu and Giresun have a direct connection with the hazelnut industry, said Yaman, the nut and seed broker from Giresun.

In the city center of Giresun, the largest city in the province of the same name, stands a statue of a man and a woman carrying a giant filbert still inside its husk, on the top of their heads.

In the Turkish culture, holding something on top of one’s head is a gesture and expression of respect, Yaman said.

The hazelnut, in kind, is economically at the “top of the head” of Giresun and Ordu residents, he said.

“Our main earnings come from the hazelnut. We are able to provide education for our children, health and food by the hazelnut,” Yaman said.

Gurhan Eris of Bulancak, Turkey, and Engin Esen of Istanbul translated during interviews for this story.