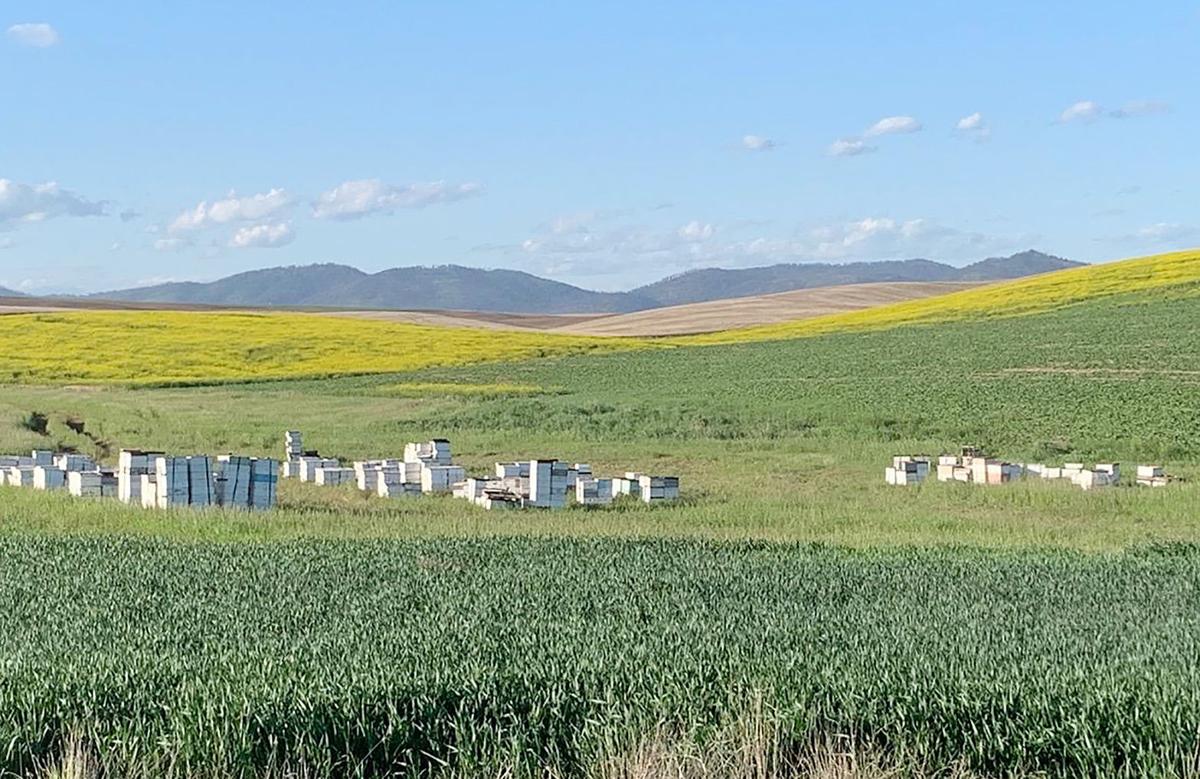 This is the original photo in which Dave Smouse recognized his stolen beehives on a farmer’s property and used the photo to track down the location. 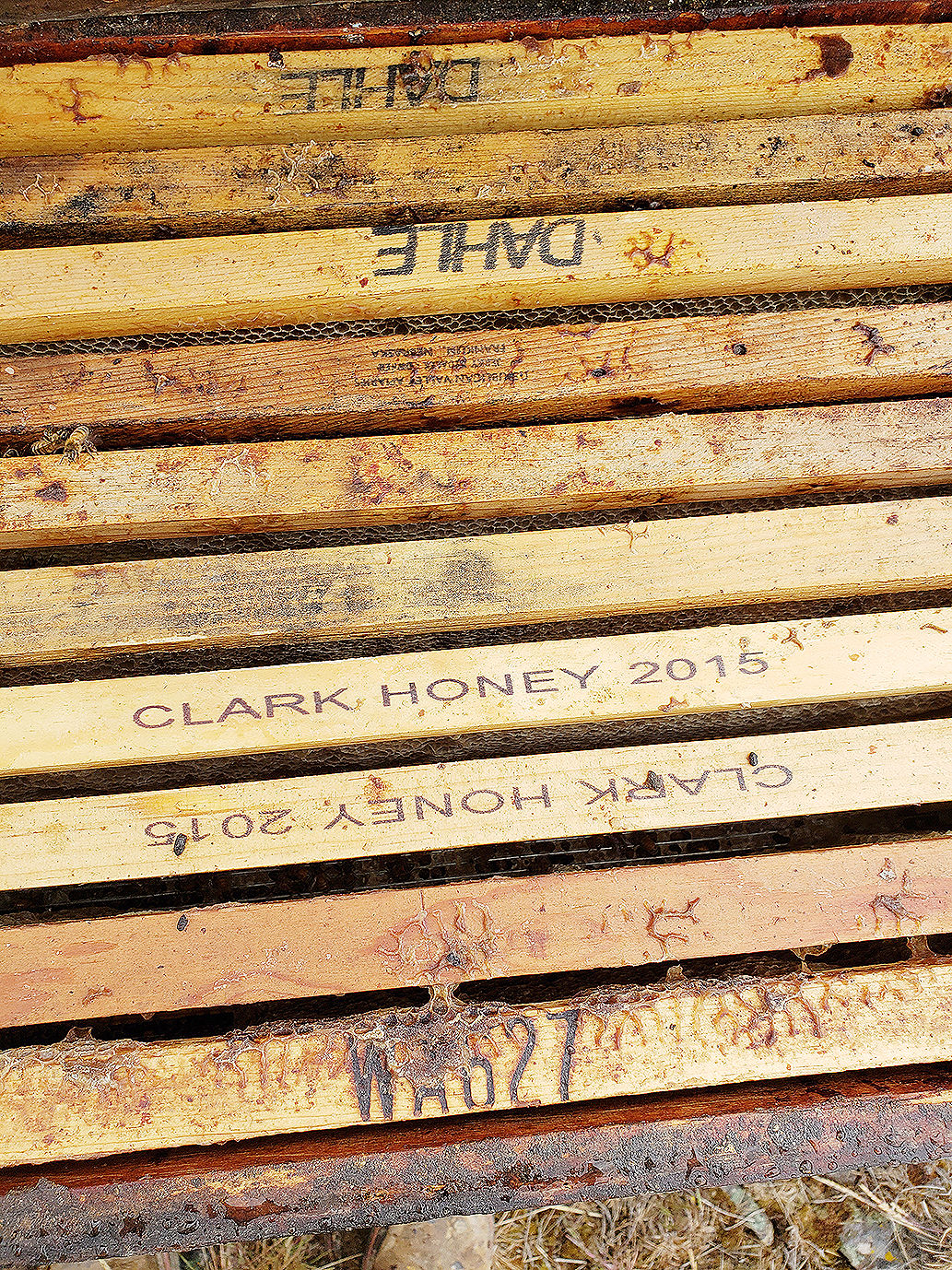 Bud Wilhelm’s branding on his beehives. Wilhelm said even though the thief appears to have spray-painted and covered logos on many of the hives, enough logos and brandings have still been visible to identify original owners. 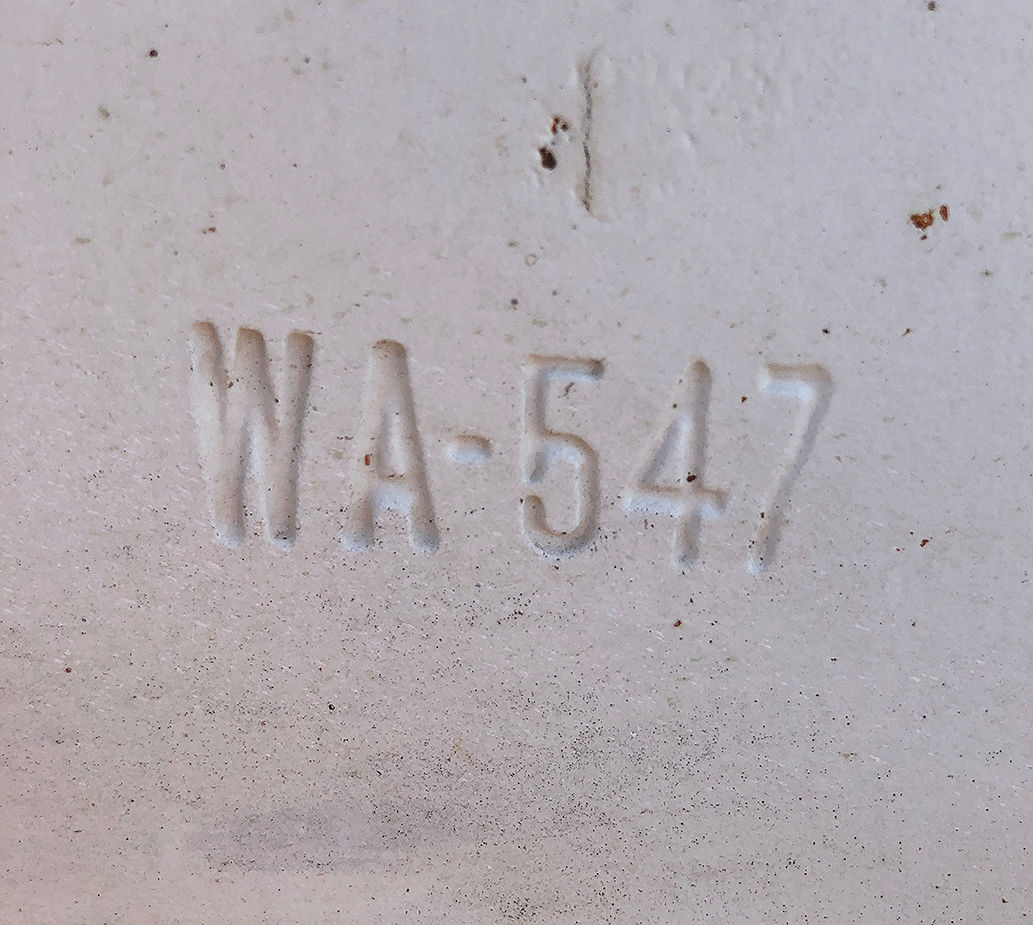 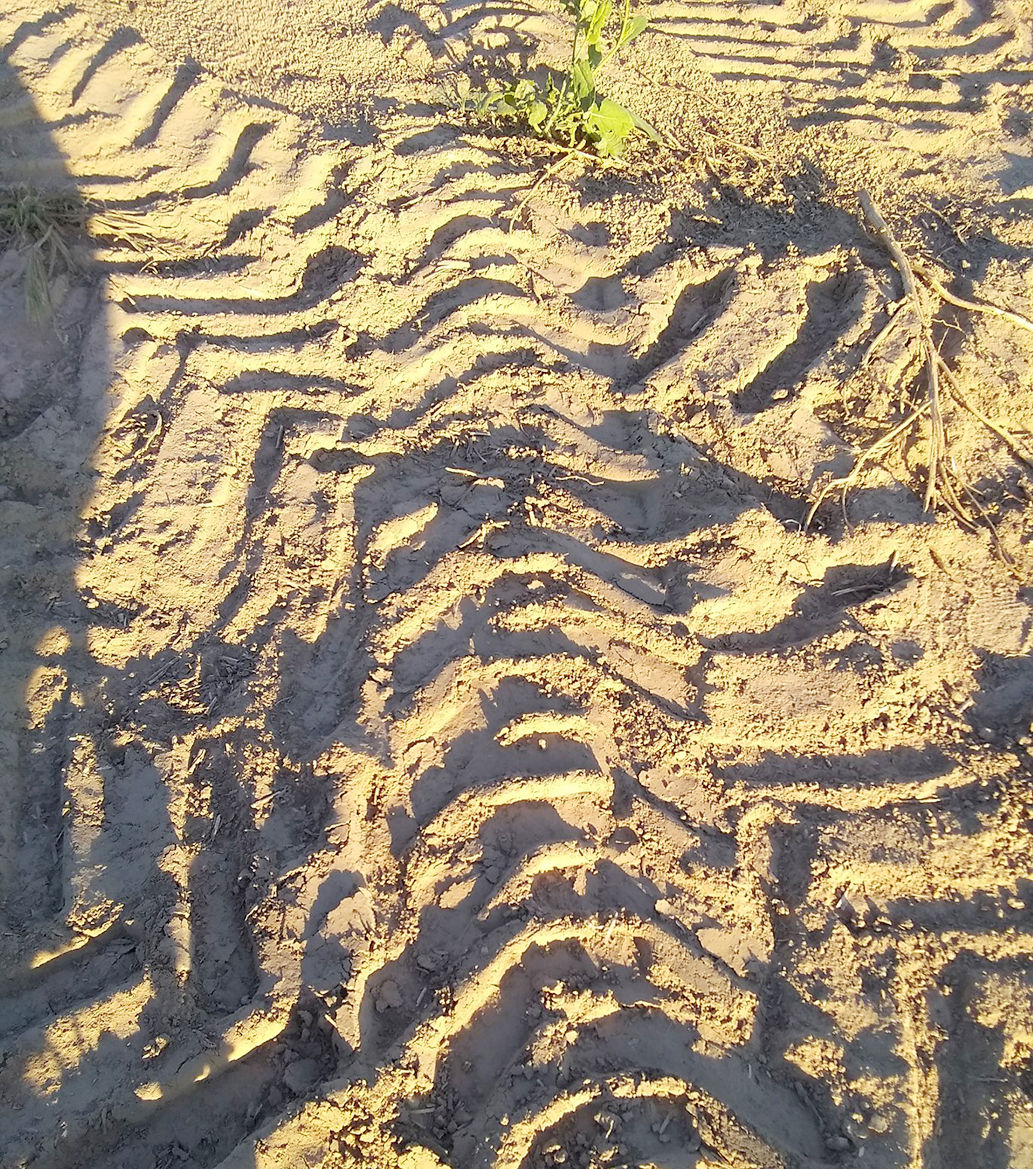 The tire tracks Bud Wilhelm found on the ground where his beehives had been stolen. The same tracks, now identified as belonging to a forklift on a vehicle, have been found across the West at dozens of sites where hives were stolen from beekeepers.

A man charged with stealing hundreds of beehives across the West has been arrested in Washington state in a joint “sting” effort by authorities and local beekeepers.

Officials say the bees could be worth more than $200,000, and the suspect has likely victimized more than 30 people across California, Washington, Montana, Idaho and Oregon.

Lincoln County Sheriff’s Office in Washington state arrested Perry Davis Bayes, 56, Sunday and charged him with possession of stolen property in the first degree, a class B felony. It is not yet known if he has a lawyer and court dates remain uncertain.

Pollination is a big business — hives rent for $200 to $300 — and agricultural detectives say hive heists have resulted in millions of dollars in losses for beekeepers in recent years.

This story, officials say, is an example of “citizen detective work” — with beekeepers, farmers and officers working together to solve the mystery.

The trail to find the thief started at Columbia Pollination, saddled between Moses Lake and George, Wash.

April 6, Dave Smouse, the company’s owner and beekeeper, said he discovered more than 200 of his hives were missing on a property along Interstate 90.

Smouse said the only marks left behind were “real skinny” vehicle tracks.

Smouse said he called the Grant County Sheriff’s Office. An officer told Smouse he’d look into it, but the theft remained unsolved.

More than a month later, on May 31, another Washington beekeeper’s hives were missing.

Bud Wilhelm, an Othello, Wash., beekeeper, had 64 of his hives stolen in Lincoln County and 84 stolen in Grant County.

Wilhelm said reporting the case was complicated because it spanned two counties and separate sheriff’s offices didn’t often work together on cases.

Early in June, Wilhelm said he called the Lincoln County Sheriff’s Office. The officers were eager to help, Wilhelm said, but Sheriff Wade Magers told the Capital Press that without the help of beekeeping and farming communities, the agency likely wouldn’t have cracked the case.

The mystery was unraveled, Magers said, “through teamwork, creativity and a bit of luck.”

Through an online group, Wilhelm met Smouse. When the two exchanged their stories of stolen bees, they noticed something in the crime scene photos: the same unique tire tracks, an unintended calling card.

“We realized: Hey, this is the same thief. So we linked together to track him down,” said Wilhelm.

Wilhelm contacted farmers in his area and asked them to take pictures of the honey bees on their land, thinking perhaps they might unknowingly be hosting stolen bees.

June 6, Smouse recognized his hives in a photo submitted by a farm.

But Smouse couldn’t get ahold of the farmer. He recognized the hill range and could tell the crop was canola, so he set out to find it, thinking it would be simple.

Finally, he found a farm that matched the photo.

The farmer, who has chosen not be named, was shocked to learn he had stolen bees on his property. He pointed Smouse to the bees’ source: Perry Davis Bayes.

Smouse, Wilhelm and the sheriff’s office soon learned that Bayes was selling honey, bee starter kits and other equipment across the West.

Smouse had found many of his bees, but Wilhelm’s hives were still missing.

Online, Wilhelm found a former employee of Bayes, who led him to 128 of his 148 stolen hives in northern Idaho. The former employee, those familiar with the case say, was likely naive rather than an accomplice.

On many of the stolen hives, Bayes had allegedly painted over original logos, covered brandings and sometimes even chopped up hives, moving bees to new containers.

It was time for an arrest.

June 14, the Lincoln County Sheriff’s Office staged a sting. The department has limited staff and hours, so officers partnered with the beekeepers for the stakeout.

Officers posed as farmers owning land where Bayes kept allegedly stolen bees. They texted Bayes, telling him the field would be sprayed by a crop duster and advising him to move the bees.

Wilhelm and Smouse camped out overlooking the field the night of June 13, watching for Bayes’ vehicle.

About 3:30 a.m., the beekeepers say they saw a flash of lights. The driver turned off the headlights and pulled through the field.

As the sun crept up, the suspect loaded hives onto his truck using a forklift.

The beekeepers called the sheriff’s office.

The beekeepers say they recall waiting another 15 minutes.

“It was pretty intense. Nail-biting. We were worried the thief might leave before getting arrested or that he might have a gun. We didn’t know anything about this guy,” said Smouse.

Smouse said he had become friends with Deputy Mallon through the few weeks of the investigation, and he felt afraid for Mallon’s life — especially since the deputy’s wife had a baby on the way.

“If something happens to him, I thought, I’ll carry that for the rest of my life,” he said.

Finally, Mallon called the beekeepers: the suspect was in handcuffs. And there on the ground were the same strange tire markings — from his “ratty old” forklift.

Beekeepers across the West are getting stolen hives returned, although they are still waiting for a search warrant on Bayes’ phone to clear so they can track down the remaining hives.

Sheriff Magers called the arrest and restoration “a very sweet ending” to a sticky story.