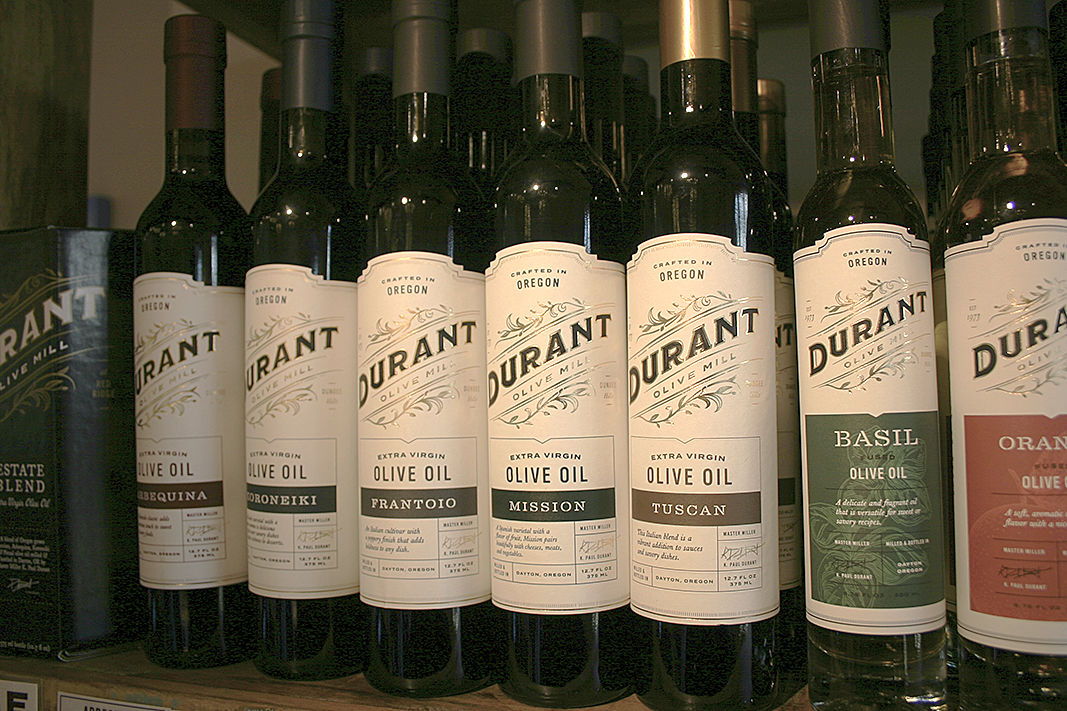 Durant Olive Mill is the only commercial olive oil mill in Oregon. 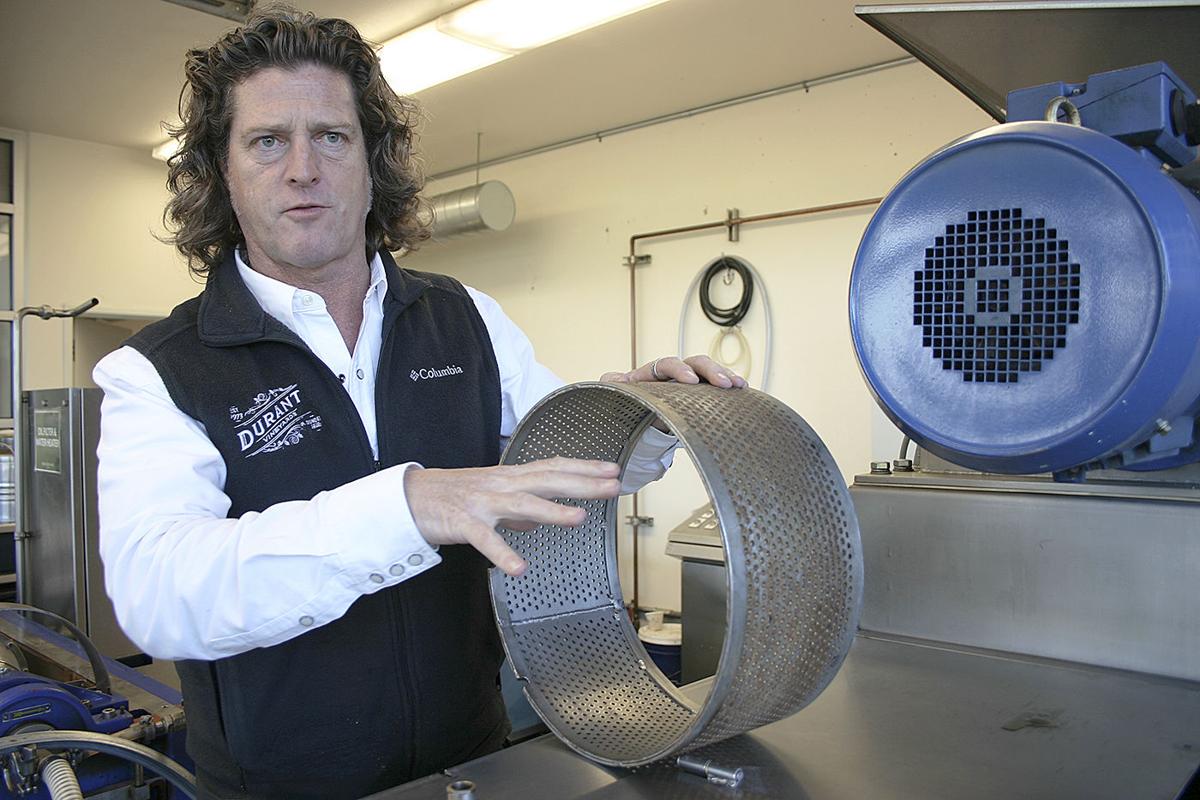 Paul Durant, of Durant Olive Mill in Dayton, Ore., explains the process of crushing olives and extracting oil from the fruit. His mill has the capacity to process 1,000 pounds of olives an hour. 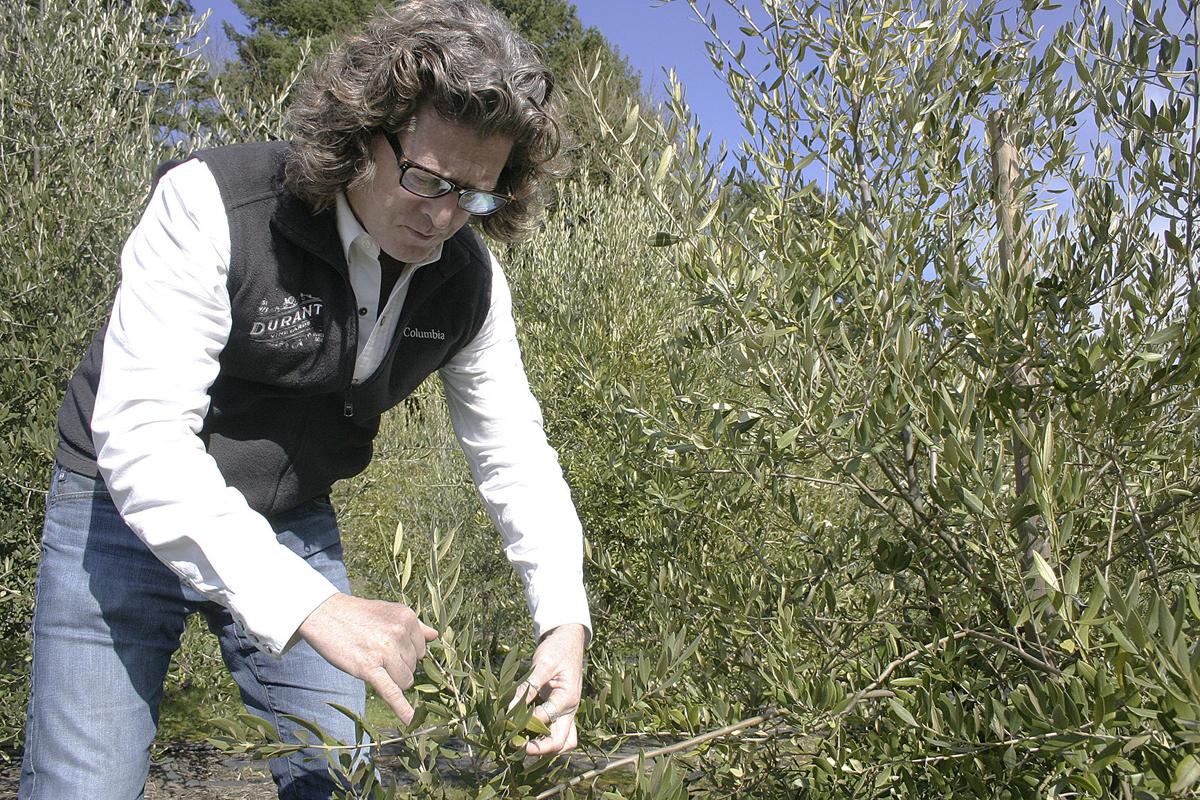 Oregon farmer Paul Durant planted his first olive trees in 2005. Today, he grows about 15 acres of a dozen different varietals, including from the Tuscany region of Italy. Oregon State University researchers are studying which trees will grow best in the state, and how to grow them. 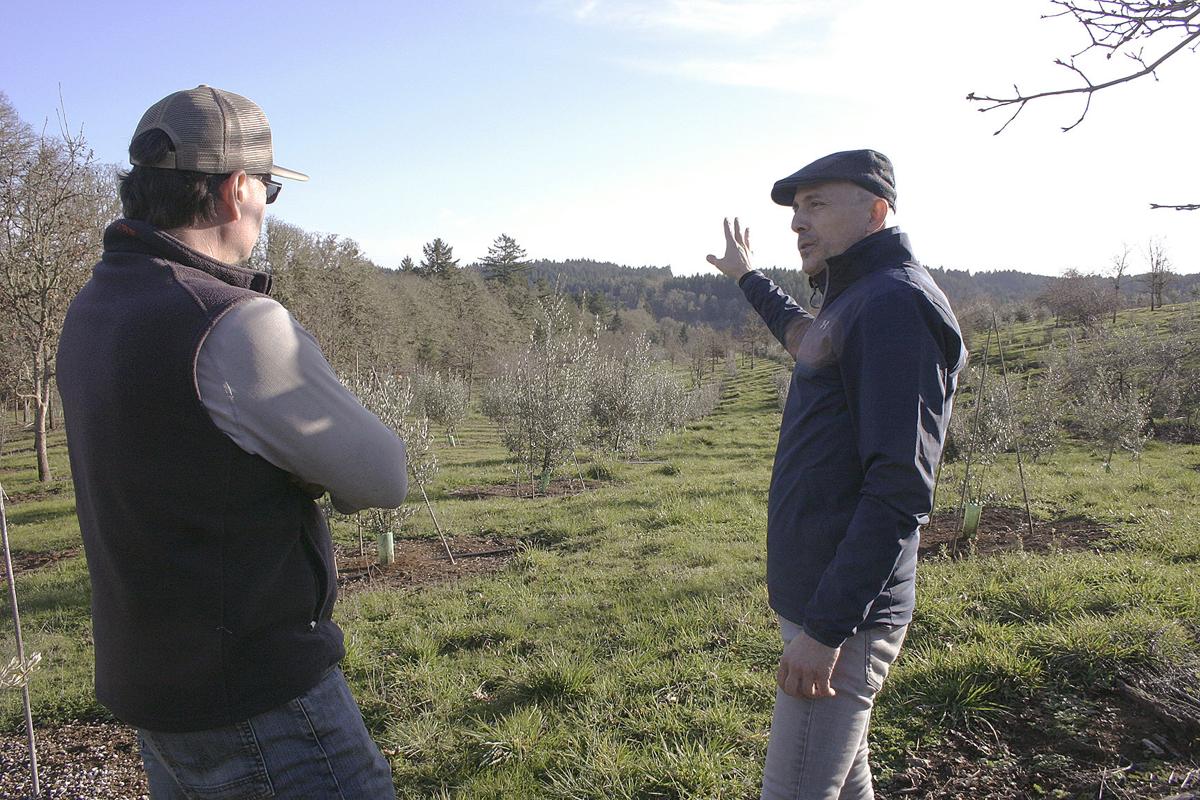 Bogdan Caceu, right, of La Creole Orchards in Dallas, Ore., discusses growing olive trees in the orchard with Bryan Brown of Westwinds Farm in nearby Rickreall. 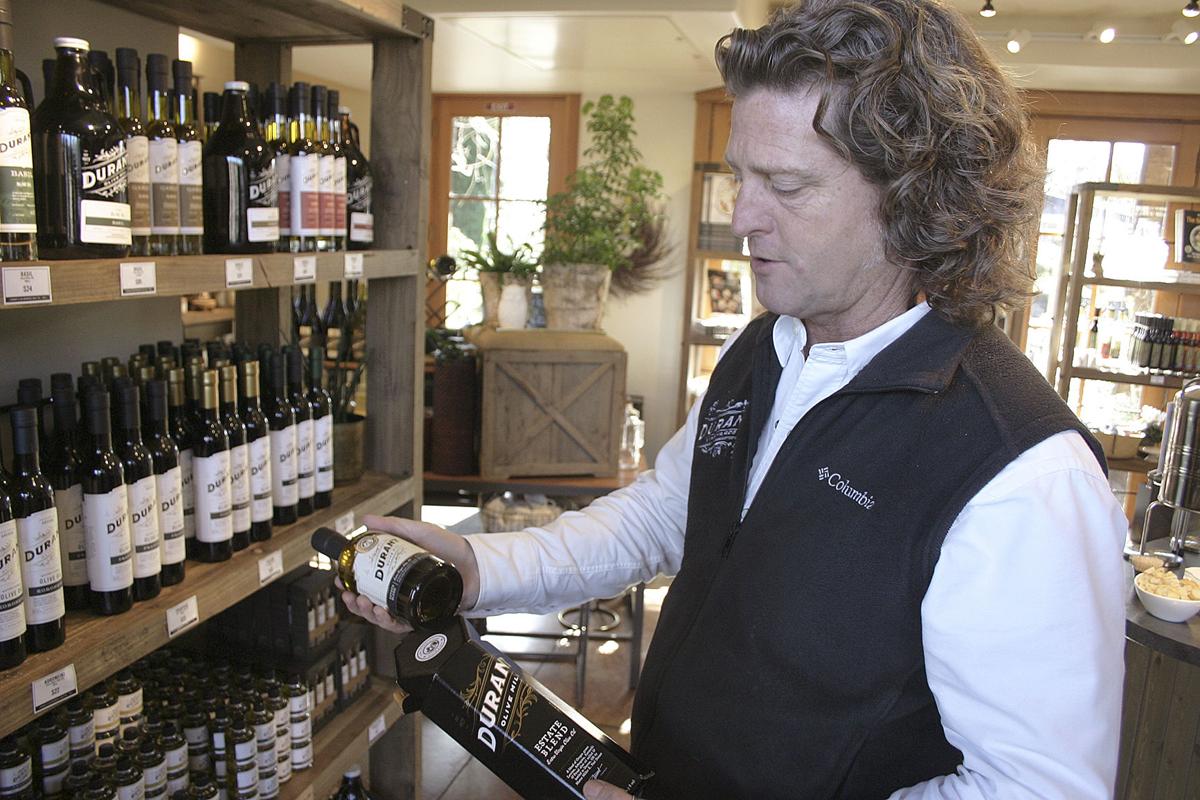 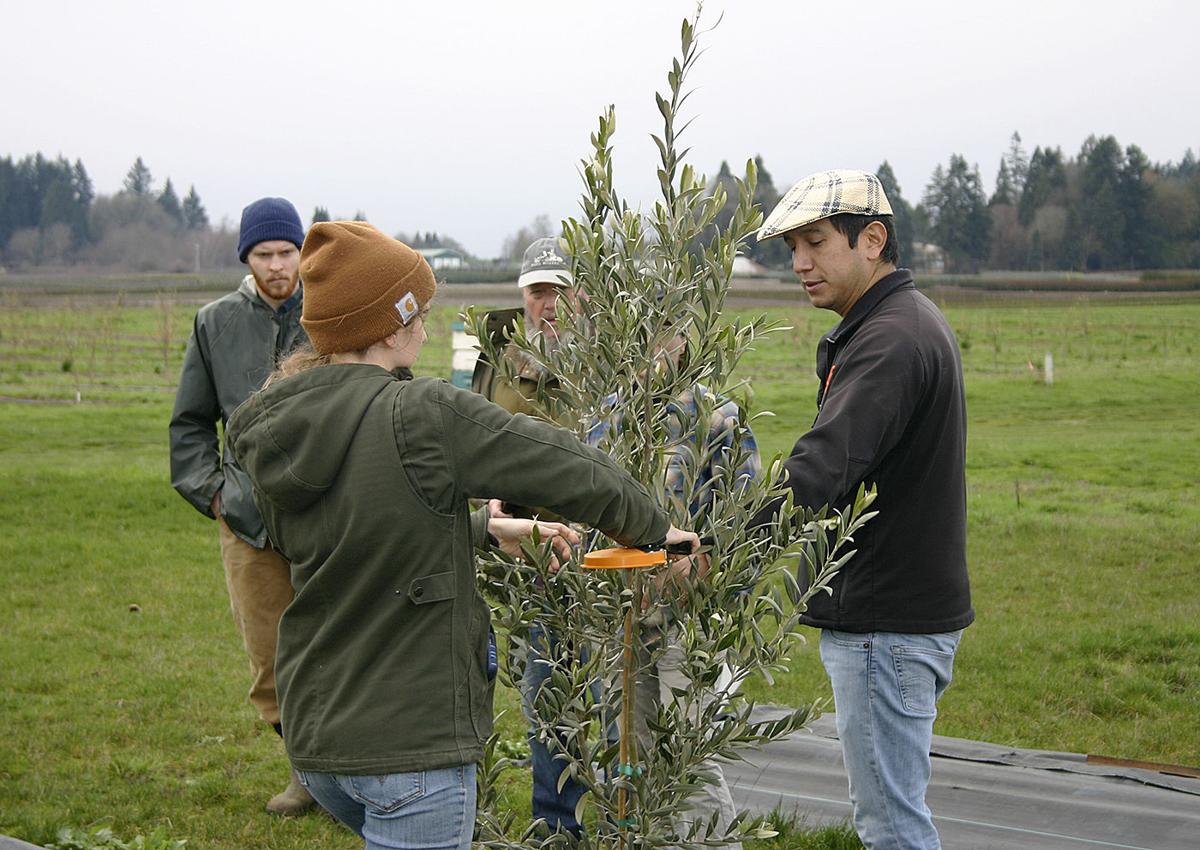 Javier Fernandez-Salvador, extension berry and olive specialist for Oregon State University, works with graduate assistant Tessa Barker during a recent tour of the Olea Project at the North Willamette Research and Extension Center. 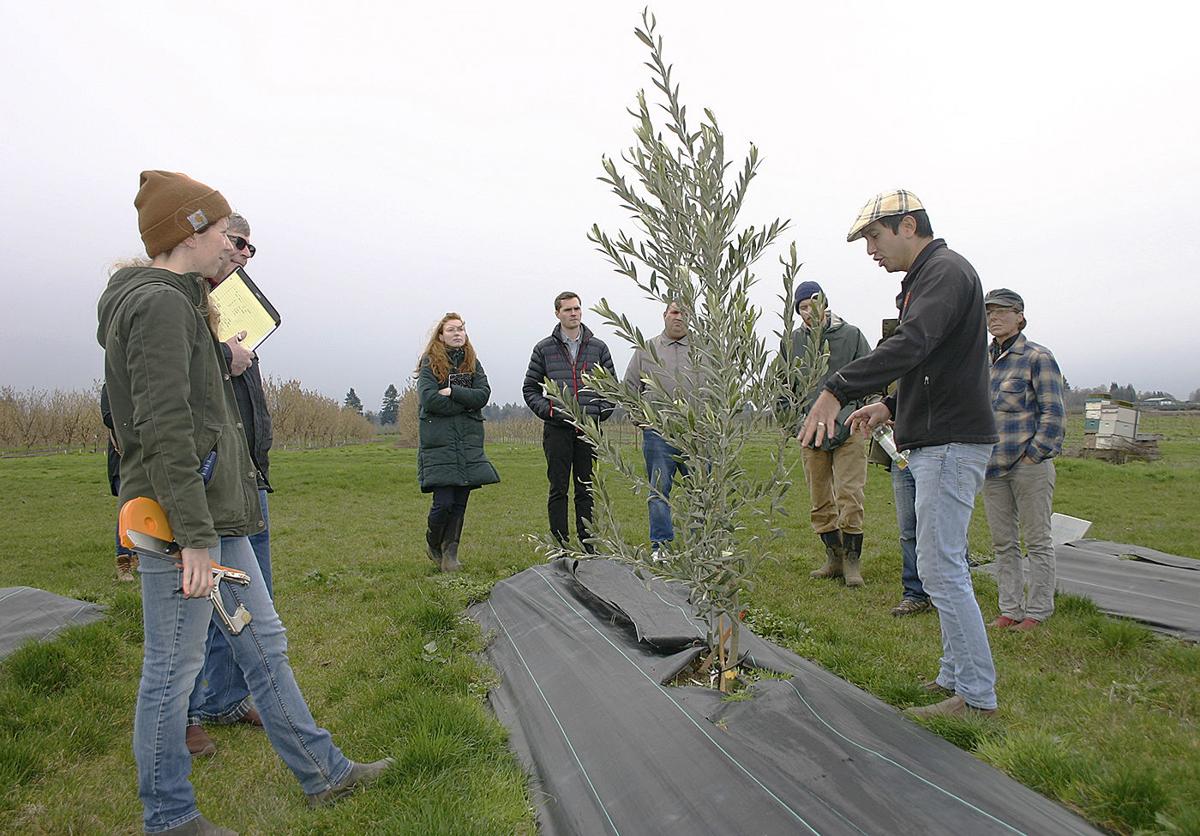 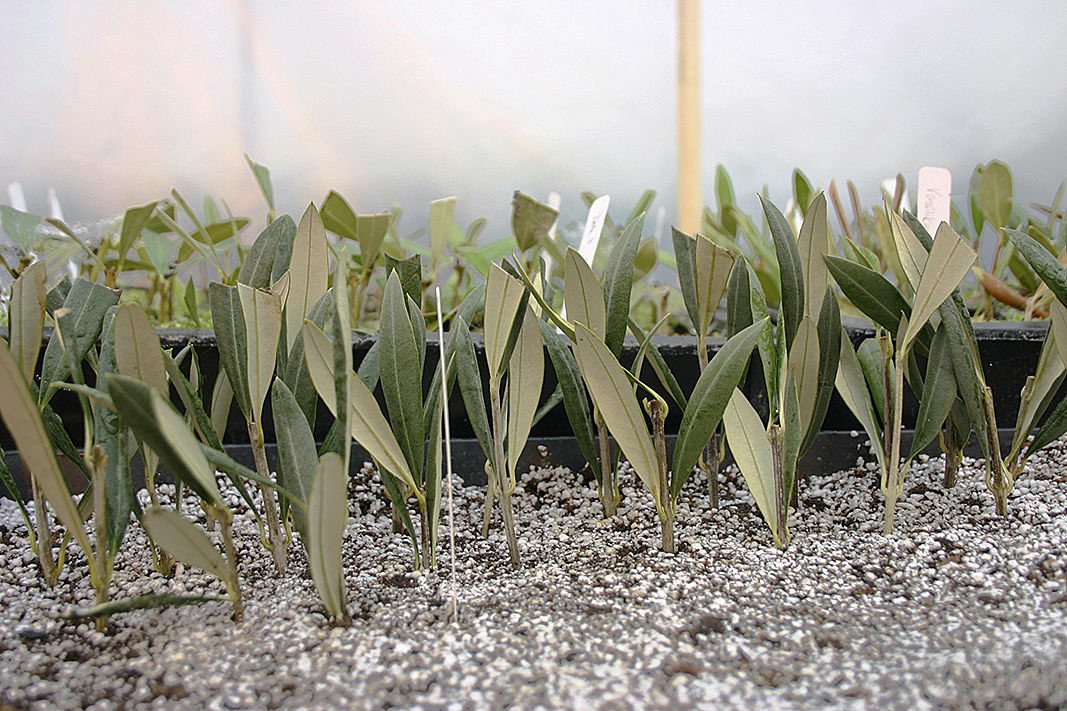 Cuttings from an Amfissa olive tree grow in a greenhouse at Oregon State University's North Willamette Research and Extension Center as part of a propagation experiment for the Olea Project.

Durant Olive Mill is the only commercial olive oil mill in Oregon.

Paul Durant, of Durant Olive Mill in Dayton, Ore., explains the process of crushing olives and extracting oil from the fruit. His mill has the capacity to process 1,000 pounds of olives an hour.

Oregon farmer Paul Durant planted his first olive trees in 2005. Today, he grows about 15 acres of a dozen different varietals, including from the Tuscany region of Italy. Oregon State University researchers are studying which trees will grow best in the state, and how to grow them.

Bogdan Caceu, right, of La Creole Orchards in Dallas, Ore., discusses growing olive trees in the orchard with Bryan Brown of Westwinds Farm in nearby Rickreall.

Javier Fernandez-Salvador, extension berry and olive specialist for Oregon State University, works with graduate assistant Tessa Barker during a recent tour of the Olea Project at the North Willamette Research and Extension Center.

Cuttings from an Amfissa olive tree grow in a greenhouse at Oregon State University's North Willamette Research and Extension Center as part of a propagation experiment for the Olea Project.

AURORA, Ore. — Conventional wisdom suggests Oregon might not be the best place to grow olives, with its relatively cooler climate compared to southern neighbor California.

New research led by Oregon State University, however, aims to determine the best varieties and farming practices for the niche crop locally, which could help to kick-start the fledgling industry.

OSU researchers began experimenting with olives in 2018 after receiving a three-year, $193,000 grant from the Western Sustainable Agriculture Research and Education program, known by the acronym SARE. Named the Olea Project — the word “olea” is Latin for “olive” — university experts are learning what it takes to establish healthy orchards, while identifying more cold-hardy varieties of trees.

Javier Fernandez-Salvador, a berry and olive specialist for the OSU Extension Service, led a small tour of the project on Feb. 7 at the North Willamette Research and Extension Center south of Portland.

“Olives are still a very small crop in the state. There are a handful of growers at this point,” Fernandez-Salvador said. “They approached us because there hasn’t been any university-led, scientifically replicated research conducted in olives.”

With fewer than 100 acres in production and only a dozen or so growers, olives remain little more than a curiosity in Oregon agriculture. Most orchards are in Marion, Polk and Yamhill counties in the Mid-Willamette Valley.

The biggest challenge growing olives in Oregon is getting young trees to survive unpredictable cold snaps during the winter, Fernandez-Salvador said. Buying and raising young trees is far more economical for new growers, costing between $5 and $8 per tree, versus up to $100 for older, established trees.

Under the right climatic conditions, such as in California, olive trees generally become established after three years and gradually increase fruit production into years five and six. But severe cold can kill saplings entirely and set growers back to square one, Fernandez-Salvador said.

“That has happened to multiple growers here,” he said. “When you plant in the fall, and you get a cold winter, the tree has no time to adapt and no time to develop. It’s basically a coin toss for survival, depending on how cold it gets that winter.”

University of California guidelines state that temperatures below 22 degrees can kill young olive trees, though Fernandez-Salvador said it is not just a matter of how cold it gets, but for how long.

Bogdan Caceu, owner of La Creole Orchard in Dallas, Ore., remembers planting his first olive trees in 2011 only to see them die that winter as temperatures fell into the single-digits.

“We are known in the Willamette Valley to have mild winters, except that there are days — and all it takes is one — when temperatures do drop,” Caceu said. “That’s enough to kill young trees.”

Caceu’s 5-acre orchard is on a gentle hillside behind a residential neighborhood that used to be overrun with wild blackberries. Caceu walked between rows of now-established olive trees, which he replanted in 2014, 2015 and 2016 with a dozen Italian varieties and three from France.

Cold hardiness is one of the most daunting hurdles for Oregon farmers interested in growing olives, Caceu said, but it is far from their only consideration. He recites an entire checklist of priorities for growers, such as when the trees will bear fruit and how much, and whether the olives will make extra virgin oil that will bring a premium price.

While there was anecdotal information at the time about cold-resistant trees, none of it had gone through rigorous scientific testing in the local environment, Caceu said.

“What was really driving us was the need to figure out which varietals are most appropriate to Oregon in general, and particularly in terms of cold hardiness,” he said.

Caceu formed the Olive Growers of Oregon in 2017 after receiving a specialty crop block grant from the state Department of Agriculture. As part of their outreach effort, Caceu said they spoke to 4,500 people, most of whom had no idea olive orchards existed in Oregon.

Fernandez-Salvador, who until that point was focused more on berry research, met with two of his OSU colleagues, horticulturists Heather Stoven and Neil Bell, to come up with a proposal for the Olea Project. They applied for funding through Western SARE, a program through the USDA.

As the project’s principal leader, Fernandez-Salvador also leads an experiment raising olives for one to three years in a greenhouse before transplanting them into a field at the North Willamette research station in Aurora, Ore. The idea is to give trees more time to mature and so they can better withstand winter cold outdoors.

Meanwhile, Bell is in charge of evaluating hundreds of cultivars and Stoven heads up the propagation trials. The team also reports to an industry advisory council that includes Caceu and others.

Oregon has only one commercial olive oil mill, part of Red Ridge Farms in Dayton. Owner Paul Durant began growing 15 acres of olive trees in 2005, having attended classes at the University of California-Davis, and made his first batch of olive oil in 2008.

Durant still buys olives from California to supplement his fruit, which he said can cost between $600 and $1,000 per ton, depending on the market. He makes about 25,000 liters of olive oil a year. The mill processes approximately 1,000 pounds of olives an hour, extracting 35 to 50 gallons of oil per ton.

“I’m able to get a premium for that,” Durant said. “Obviously, if we were purely in a wholesale market, it would be tough. The key is to have direct-to-consumer (sales). That’s the Holy Grail.”

Red Ridge Farms also doubles as a winery, Durant Vineyards, providing a venue for olive oil sales and tastings. In the gift shop, a row of steel tanks dispenses samples of different olive oils made by Durant, including some infused with flavors such as lemon, garlic and basil.

The 100% estate oil features a deep emerald green color, and notes of grass and pepper, which Durant explains is due to higher levels of antioxidants from the olives.

“It’s a little like tasting wine,” he said. “People go crazy for this.”

Durant said he hopes the Olea Project will lead to olives becoming more of a thriving crop around the state, which in turn would help to drive more business at mills like his. Since olives are hand-picked, he estimates harvest costs are $450 to $850 per ton.

“This is a serious book of business for us,” Durant said. “I would love to see it become a more commercial crop.”

During the recent project tour, Fernandez-Salvador walked a group of eight people thorough his orchard establishment trial where olive trees are grown in 1-, 3- and 5-gallon pots inside the greenhouse before being transplanted into the field.

Four varieties were selected for the experiment, including Leccino, Ascolana and Frantoio olives from Italy, and Amfissa olives from Greece.

“If it gets to those low temperatures, and you have a small hoop house where you can move them in and maybe turn on your space heater or your gas or propane burner for the two or three nights when it gets really cold, you’re not going to kill your trees as it would happen outdoors,” Fernandez-Salvador explained.

Fernandez-Salvador said the trees do require irrigation when planted. “Our idea was to put one of our fall plantings entirely in dry farming ... hand-watering that first year, but because of the lack of irrigation and a very dry fall, we lost a few trees,” he said.

Though it will be years before the researchers can draw any firm results from the project, it is garnering interest among potential growers.

Elisabeth Buschen-Monahan attended the tour, where she said she was drawn to the crop in part because of the romantic culture of places such as Tuscany in Italy. Buschen-Monahan owns Fraga Farmstead Creamery in Gales Creek, Ore., about 30 miles west of Portland. The 34-acre farm is Oregon’s only certified organic goat dairy.

Not only does fresh olive oil pair nicely with goat cheese, but Buschen-Monahan also said she believes the trees will fare well in Oregon into the future, anticipating the effects of climate change.

“Olives are just about right here. In the future, they’ll probably do better,” she said.

Bushchen-Monahan said she plans to try 1-2 acres of olives on her farm, though as she discovered, building a greenhouse for the younger trees will be essential.

Farm diversification is one of the reasons farmers are expressing interest in olives, Fernandez-Salvador said. Industries are in constant change, he said, and having a diverse portfolio of crops can help insulate against severe downturns in a single market.

The Olea Project plans to do a full economic analysis of growing olives in Oregon, he said, as more funding becomes available and research continues.

“Long-term, I think it could be something that is quite feasible,” he said.