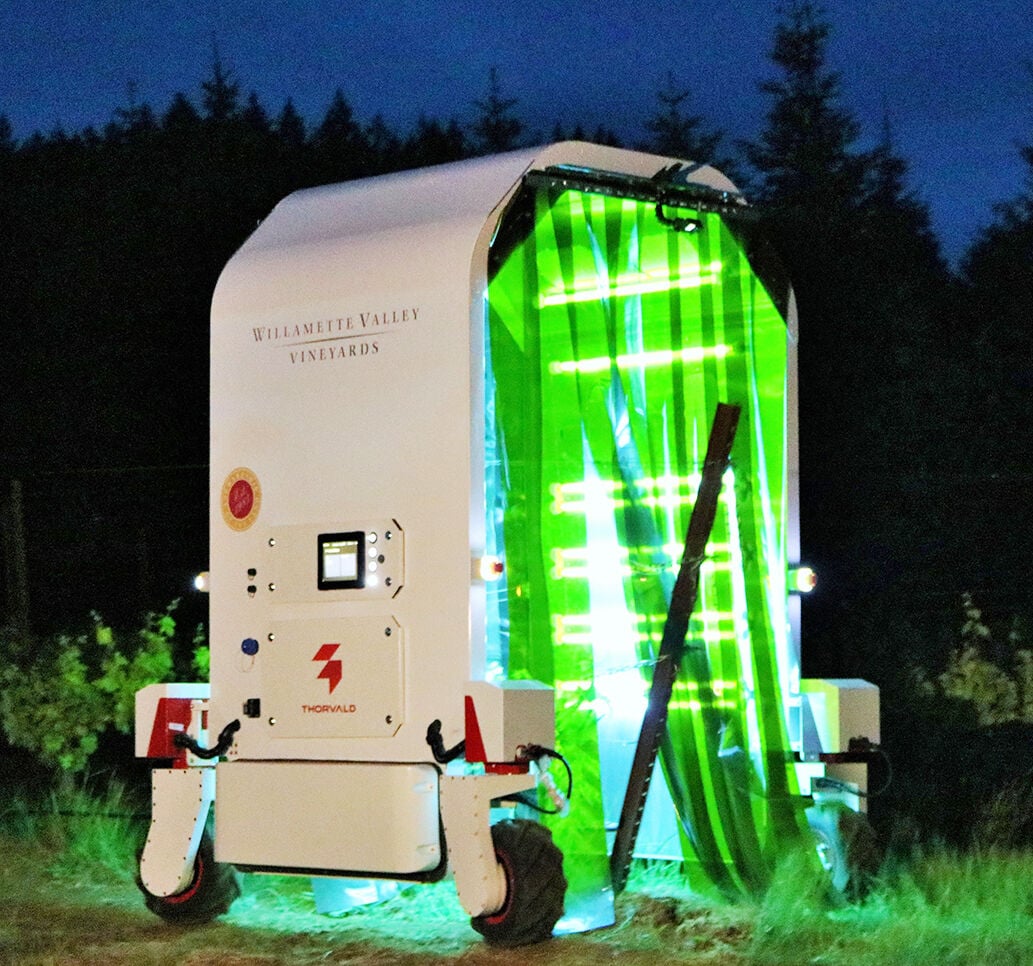 Willamette Valley Vineyards in Turner, Ore., is the first commercial operation to adopt the Thorvald, an autonomous, self-driving robot equipped with a special band of UV lights to suppress powdery mildew. 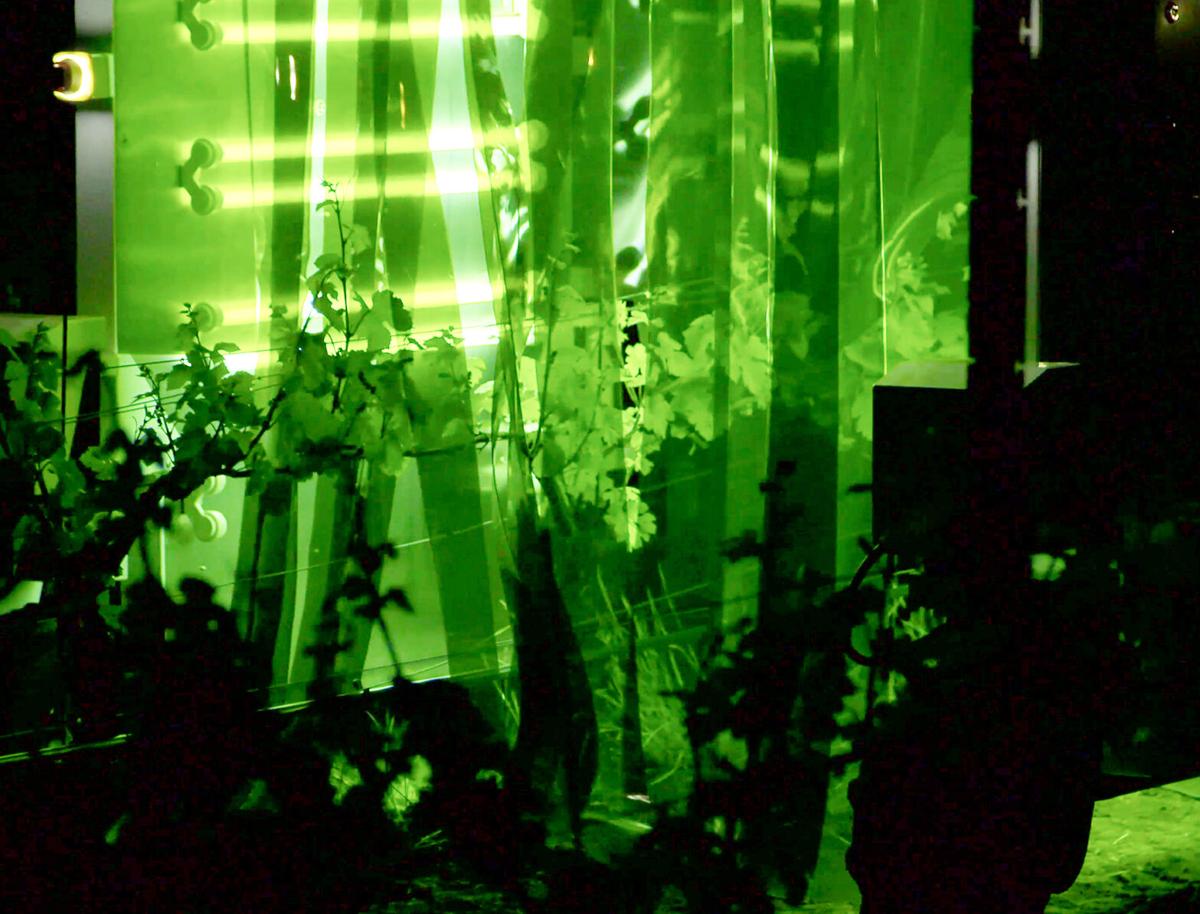 A closeup of the Thorvald as it passes over rows of grapevines at Willamette Valley Vineyards. 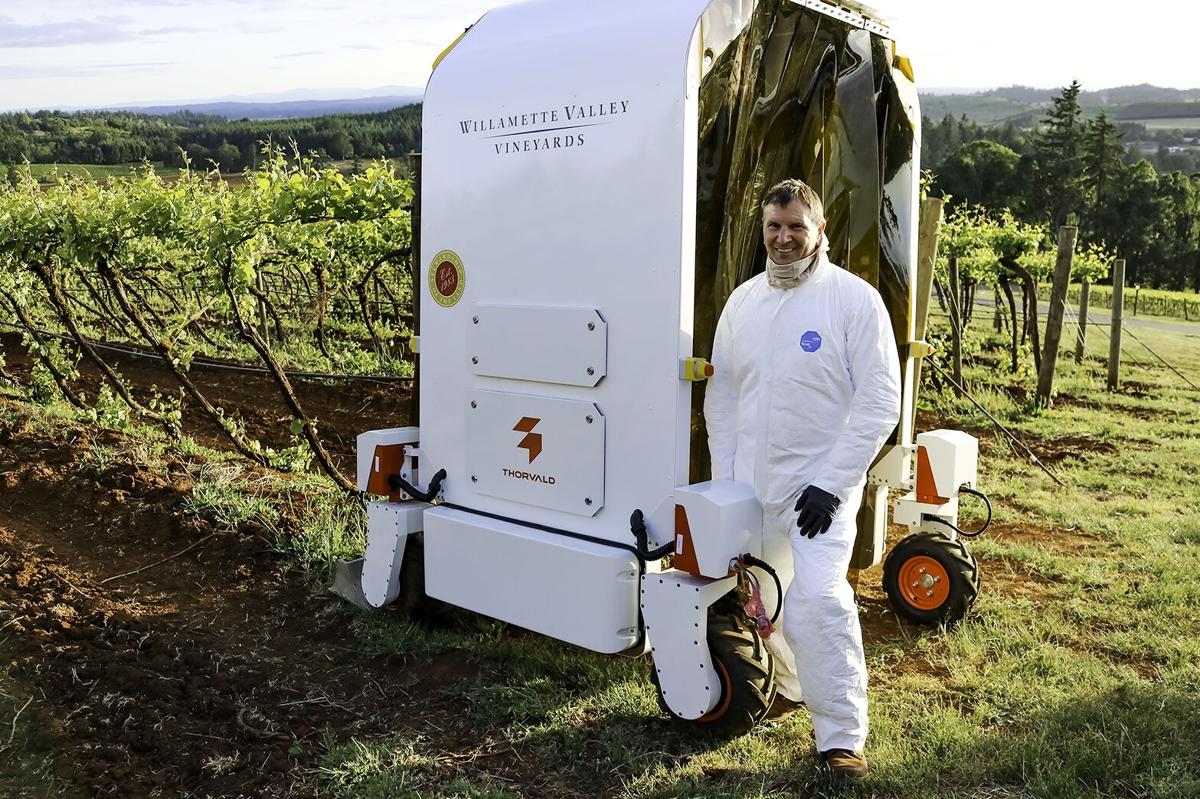 David Markel, research and development manager at Willamette Valley Vineyards, prepares to operate Thorvald at the winery south of Salem.

Willamette Valley Vineyards in Turner, Ore., is the first commercial operation to adopt the Thorvald, an autonomous, self-driving robot equipped with a special band of UV lights to suppress powdery mildew.

A closeup of the Thorvald as it passes over rows of grapevines at Willamette Valley Vineyards.

David Markel, research and development manager at Willamette Valley Vineyards, prepares to operate Thorvald at the winery south of Salem.

TURNER, Ore. — The robot shines an eerie green in the dark of night as it maneuvers over rows of grapevines at Willamette Valley Vineyards.

Developed by Norwegian-based Saga Robotics, Thorvald — as the system is named — is an autonomous, self-driving vehicle that looks a bit like a small shed on wheels. Inside, it is equipped with a special band of ultraviolet lights designed to suppress powdery mildew and other plant diseases.

As research continues to demonstrate the efficacy of UV light as a management tool for farmers, Willamette Valley Vineyards has become the first commercial operation to adopt Thorvald in place of traditional chemical fungicides to control powdery mildew in winegrapes.

“We see this as a remarkable opportunity for our industry to grow high quality winegrapes and do it in a very natural, sustainable way,” said Jim Bernau, the winery’s founder and CEO.

While Bernau and Willamette Valley Vineyards began experimenting with UV light last year, scientists from around the world have been conducting field trials on and off for decades, spanning a variety of crops including strawberries, apples, cucumbers and hops.

Gadoury was the featured speaker at a webinar May 27 hosted by Washington State University and the Washington State Wine Commission, providing vintners with the latest information about UV light and its potential as an alternative for curbing plant diseases.

Powdery mildew, in particular, is one of the most widespread problems in the wine industry. If not suppressed, the disease can reduce crop yield by as much as 95% and degrade wine quality.

The first field trials using UV light took place in 1991, though they were less than successful, Gadoury said. Though it effectively reduced powdery mildew in grapes, it also defoliated vines and caused the fruit to shrivel, resembling miniature russet potatoes.

Then came a key discovery 10 years ago. A doctoral student in Norway found that UV light was much more effective killing powdery mildew at night, when the pathogens’ natural systems for repairing their DNA have shut down to conserve energy.

Not only are the pathogens more susceptible at night, but Gadoury said they were able to use 10% less UV-C to achieve the same levels of disease reduction, at levels that won’t cause damage to the plants or fruit.

“Pathogens such as powdery mildew, and many other organisms, just really don’t like UV light at night,” Gadoury said. “That means we can kill them with a fraction of the dose that’s required during daylight.”

New trials started in 2017 at a commercial strawberry farm in Florida. This time, they proved a rousing success, performing significantly better than applications of chemical fungicides.

Additional trials are now underway in places like California and Nova Scotia, Canada, as well as overseas in Europe.

“I think we’re beyond the point where we have to worry about whether or not this technology is going to provide sustainable control of strawberry powdery mildew,” Gadoury said. “It actually works quite well.”

The technology is also being put to the test in Northwest vineyards.

{p class=”p1”}The winery’s interest in UV light actually started as a way to kill the coronavirus at the height of the pandemic last year in its tasting room, south of Salem.

{p class=”p1”}”We learned it can be used to kill viruses and other things like powdery mildew — naturally, without the use of chemicals,” Bernau said.

{p class=”p1”}In addition to WSU, Gadoury has worked with researchers at the USDA Agricultural Research Service station in Corvallis, Ore., on field testing.

{p class=”p1”}Gadoury cautioned that UV light is not a magic bullet that will eliminate all pesticide use, but at least in the fight against powdery mildew, it appears to equal or exceed some of the best fungicidal applications on the market.

{p class=”p1”}”While these machines have a certain ‘cool factor’ — they’re fun to watch — it’s the research on epidemiology, pathogen ecology and photobiology research that really makes them work,” he said. “Otherwise, it’s just a toy.”