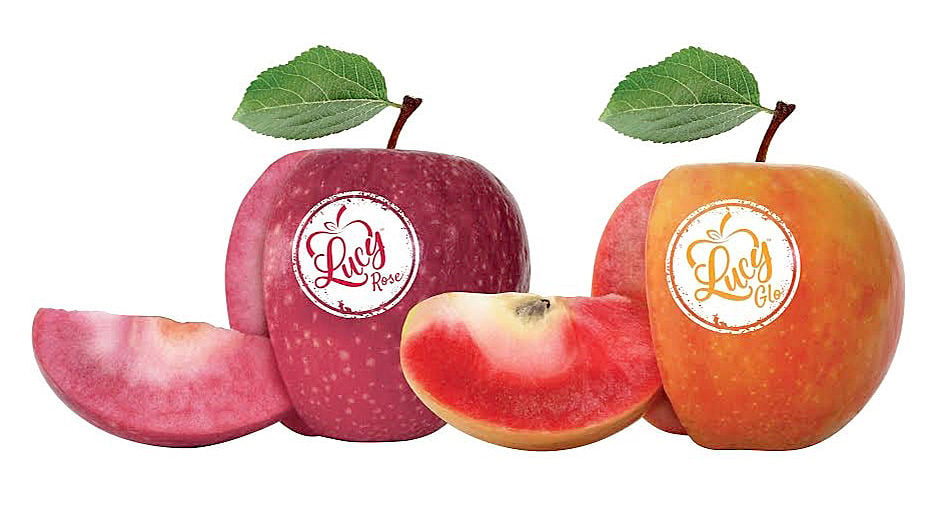 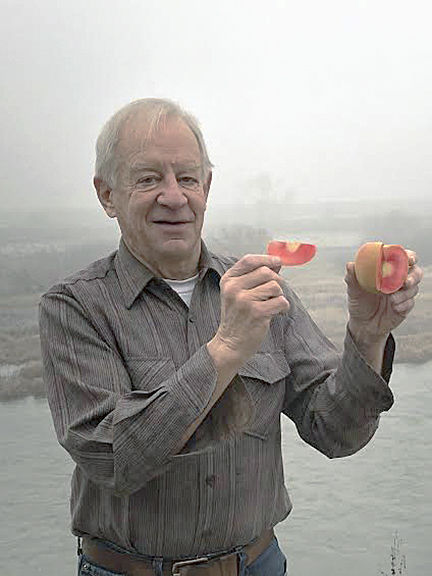 Bill Howell holds a sliced Lucy Glo apple at his Topcliffe Farm in Prosser, Wash., on Dec. 24. The red-flesh apples have already sold out in their second year of limited commercial sales.

Bill Howell holds a sliced Lucy Glo apple at his Topcliffe Farm in Prosser, Wash., on Dec. 24. The red-flesh apples have already sold out in their second year of limited commercial sales.

PROSSER, Wash. — They’re little known so far with commercial sales just beginning, but the breeder of the red-flesh Lucy Rose and Lucy Glo branded apples hopes consumers will love them.

“I’m a proud grandpa of these things. All I’ve heard is good things. We have a picture on our refrigerator of a preschool group in Kirkland and the card says, ‘We love your apples!’” says Bill Howell, the breeder and grower in Prosser.

They have “outstanding flavor” from Honeycrisp as one parent and a “hint of berry” from the other, a crab apple, he says.

The Lucy Rose has red skin while Lucy Glo is a little tangy and has yellow skin.

Howell, 74, was a research technologist in plant virology at the Washington State University Irrigated Agriculture Research and Extension Center, in Prosser, from 1973 to 2012. He studied viruses in sugar beets, carrots and fruit trees.

He has cattle and tree fruit on his 9-acre Topcliffe farm near Prosser and planted the first Honeycrisp apples in the state there in 1994.

About 20 years ago as Crunch Pak, in Cashmere, was starting to produce snack packs of sliced apples, Howell thought, “It would be neat to have some color in there.”

He obtained and planted three varieties of red-flesh apple trees from a nursery in Michigan.

“They turned out to be not very good quality fruit,” he said.

So he collected seed from the trees after they had been pollinated by Honeycrisp. The trees from that seed were more promising, and by 2009 he had what he later trademarked as Lucy Rose and Lucy Glo.

Proprietary Variety Management, in Yakima, working with focus groups selected the names and oversees commercialization. Chelan Fresh Marketing in Chelan and Stemilt Growers in Wenatchee have licenses to grow, pack and sell the apples.

They are selling at high-end prices with just a “couple thousand boxes” sold the first year from the 2018 crop and about 8,000 40-pound boxes sold in two-layer Euro cartons from the 2019 crop, Evans said.

Chelan Fresh sold out in early December to retailers across the country, he said.

“There are some handling issues with the Glo. It’s prone to bruising and the red flesh can come through. We’ve tried to create best practices,” he said.

Howell is experimenting with Cripps Pink and Honeycrisp crosses but says his emphasis is on red-flesh varieties.

The limiting factor, he said, is finding enough cooler, high-elevation sites where they grow best for maximum finish, color and quality.

“Ultimately, we are all trying to grow the apple market,” Howell said. “I hope that with the uniqueness of red flesh and flavor that we can get per capita consumption of apples up a bit.”