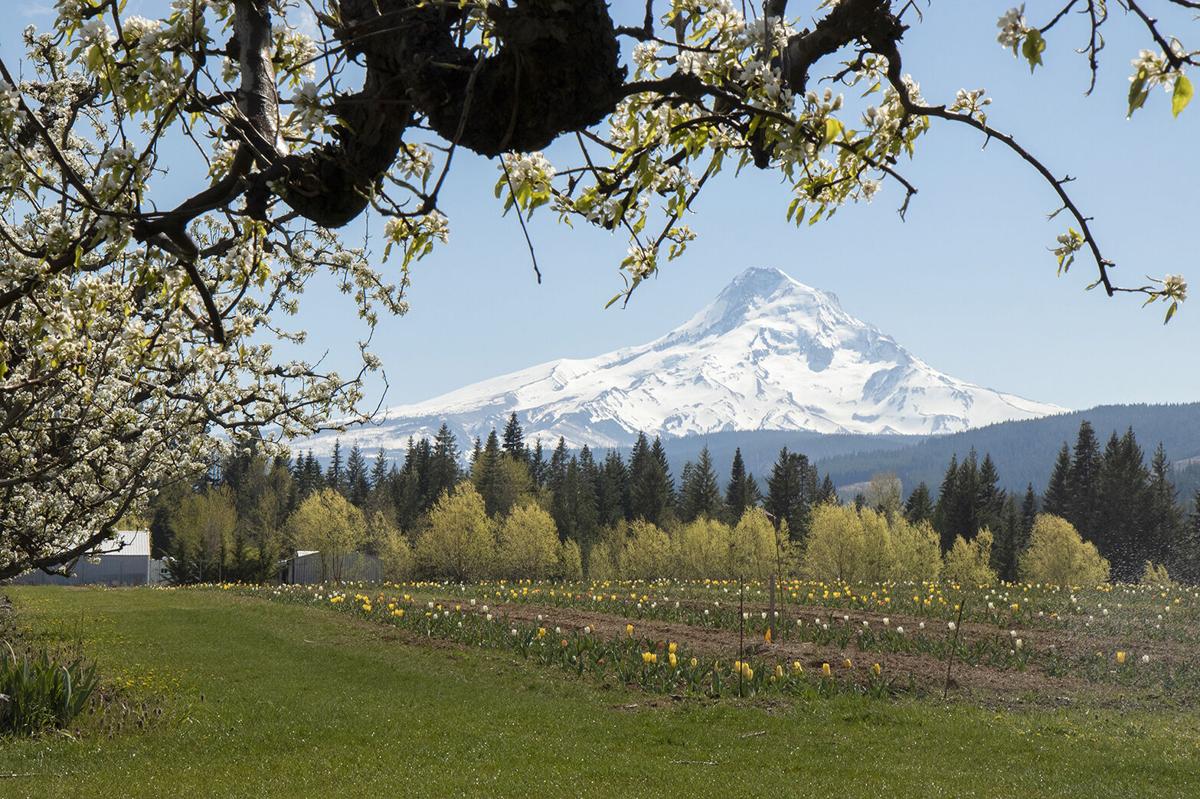 A field of tulips next to a pear orchard in Hood River, Ore. 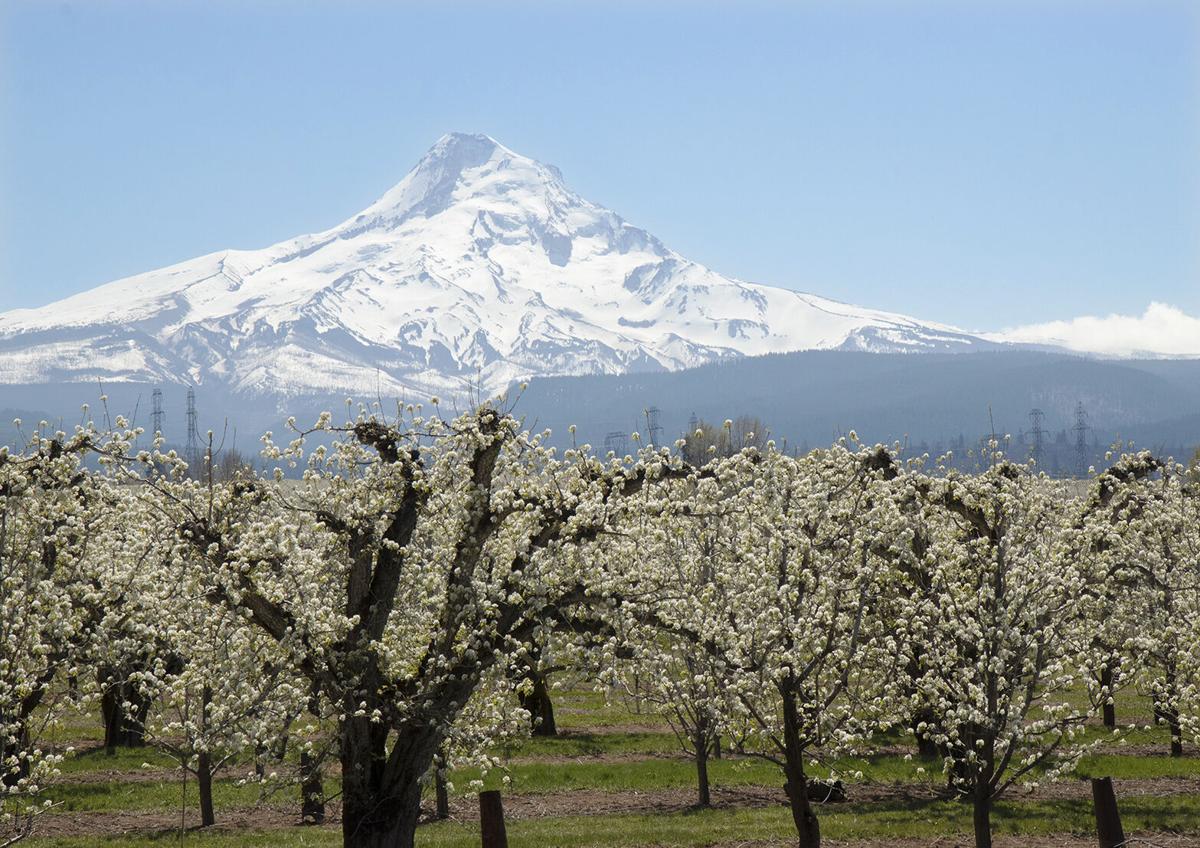 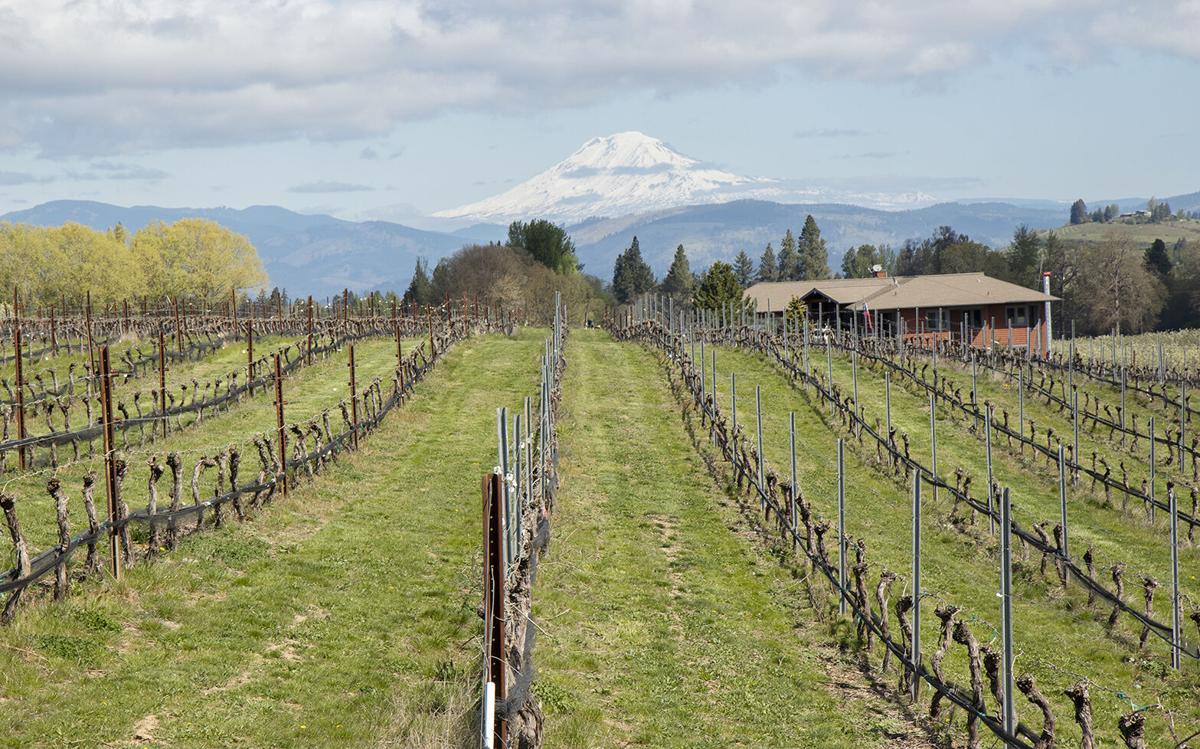 Mount Adams behind a farm in the Hood River area. 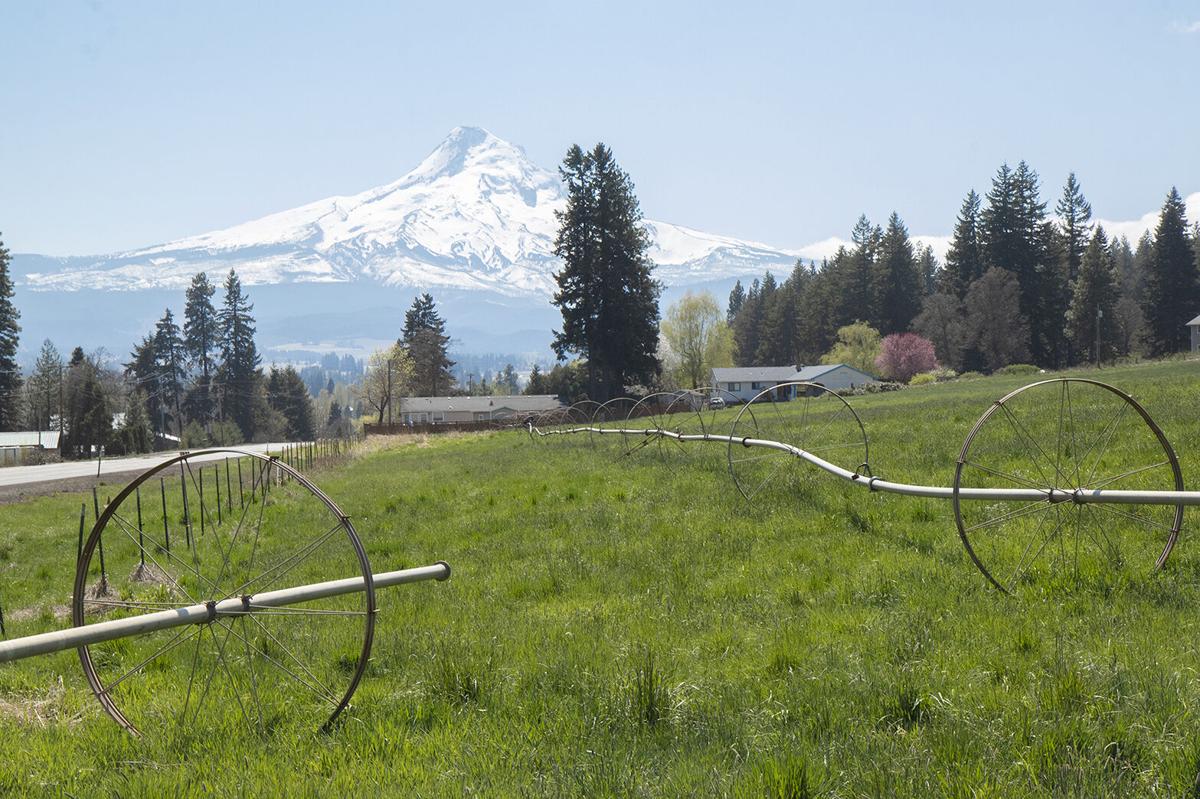 Irrigation systems on a farm near Mount Hood. 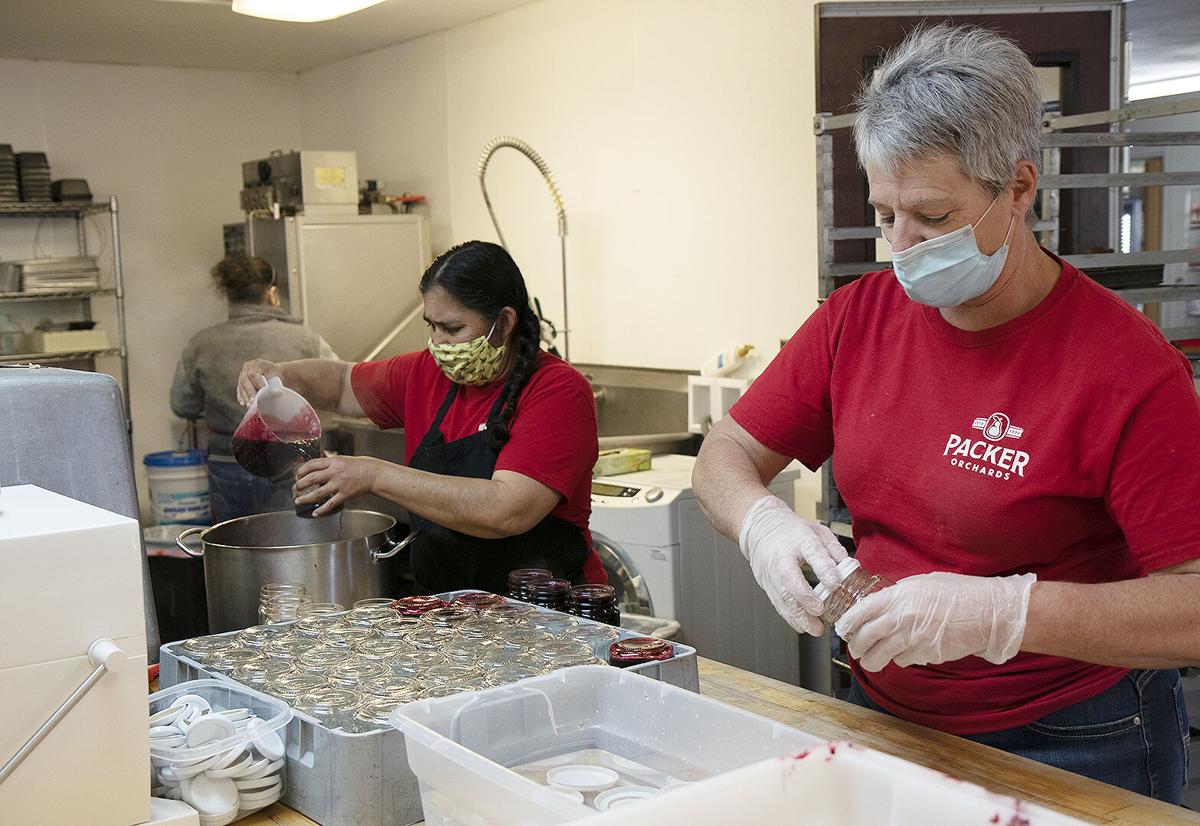 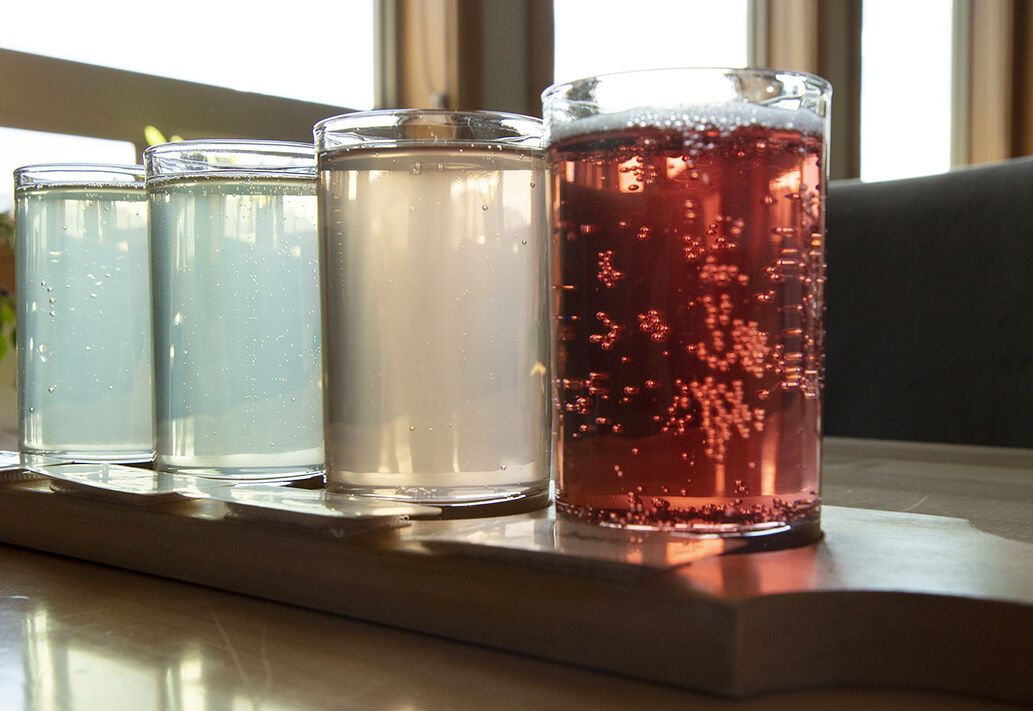 Ciders at The Grateful Vineyard created with fruit from the farm. 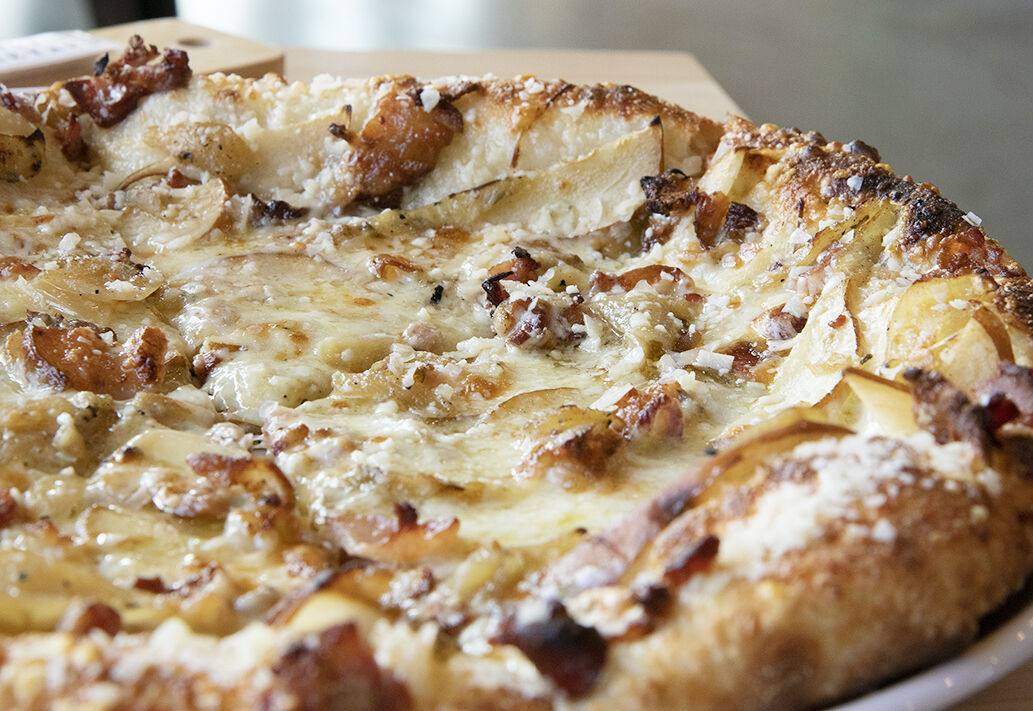 Called the “Mt. View Orchard Pear” pizza, this pizza is topped with Bosc pears. Trina McAlexander and her family, of Mt. View Orchards, try to use the pears grown on their property in as many recipes as possible. 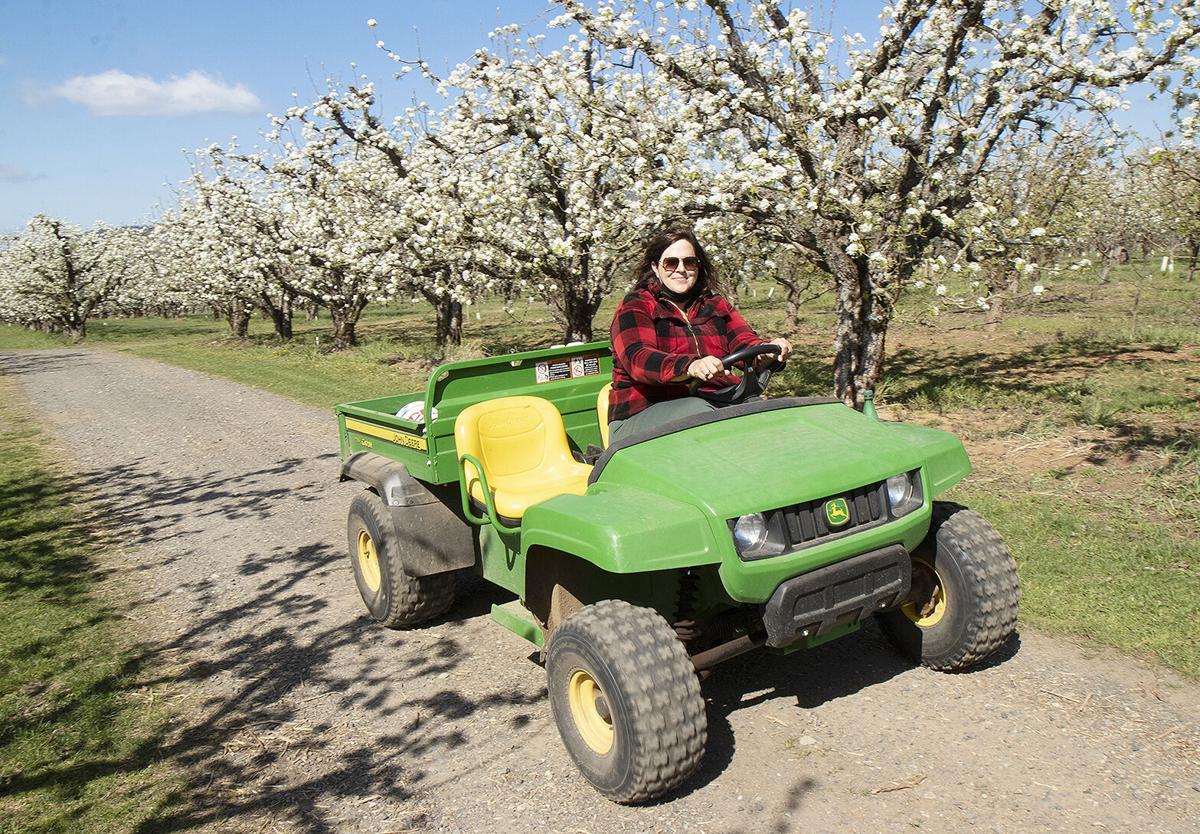 Trina McAlexander, owner of The Grateful Vineyard and Mt. View Orchards, drives her Gator through an orchard. 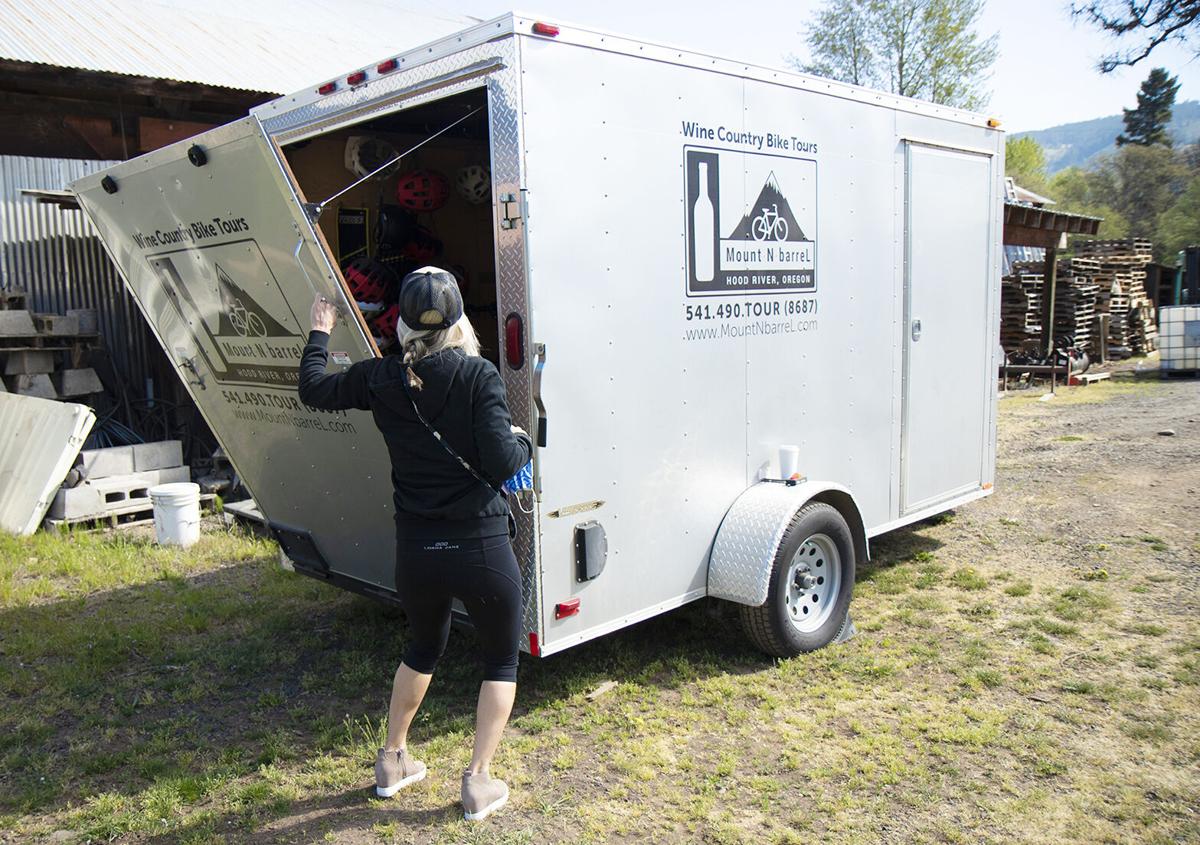 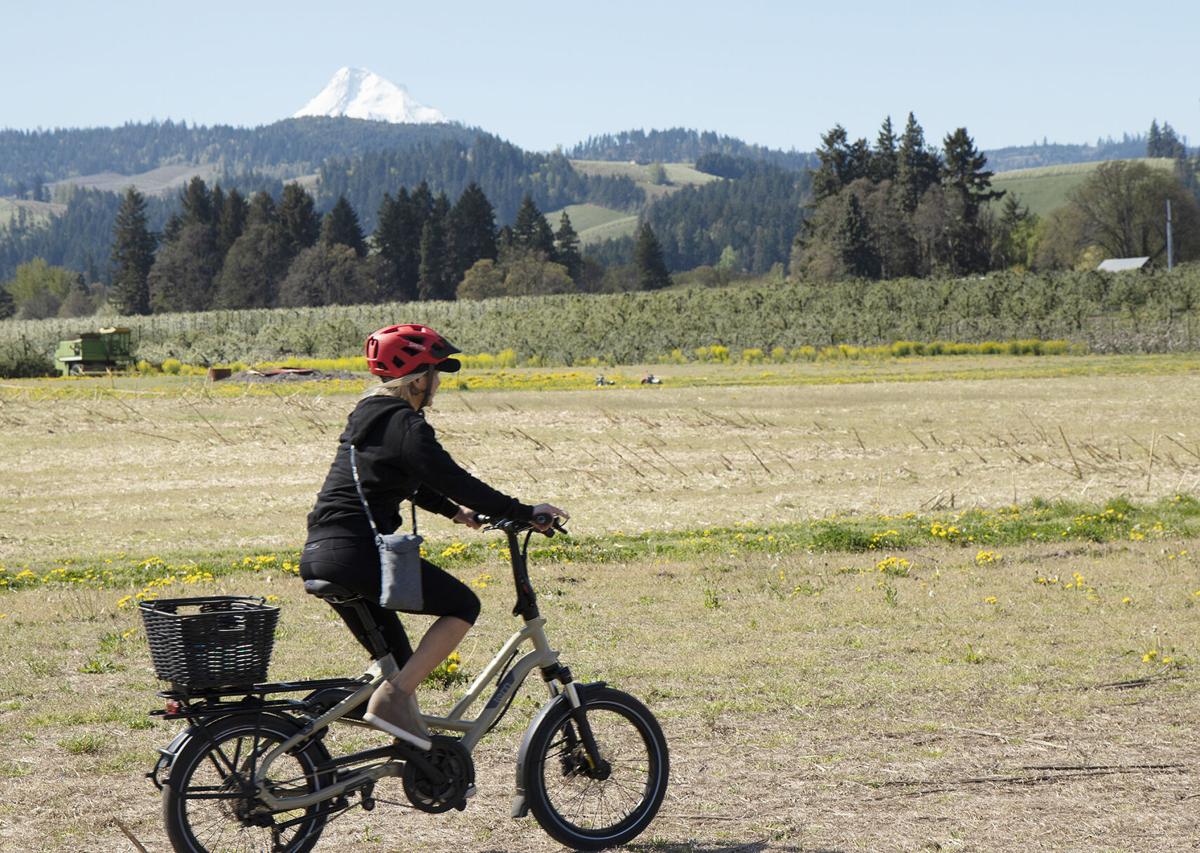 Ali Mclaughlin, founder and tour guide at MountNBarrel, rides past farmland with Mount Hood in the background. 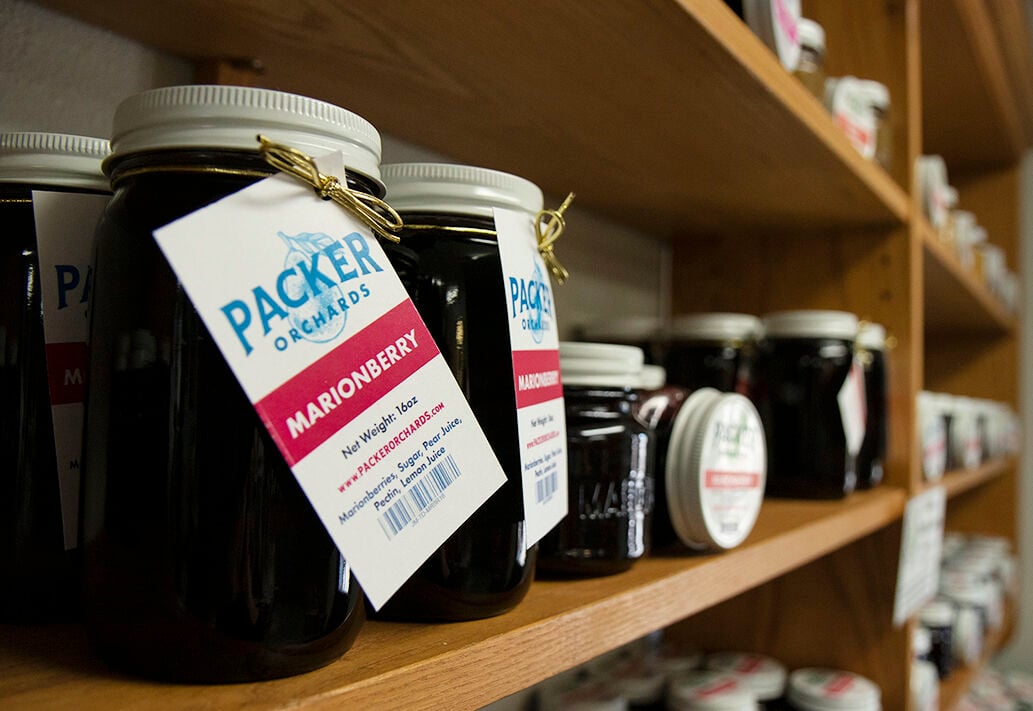 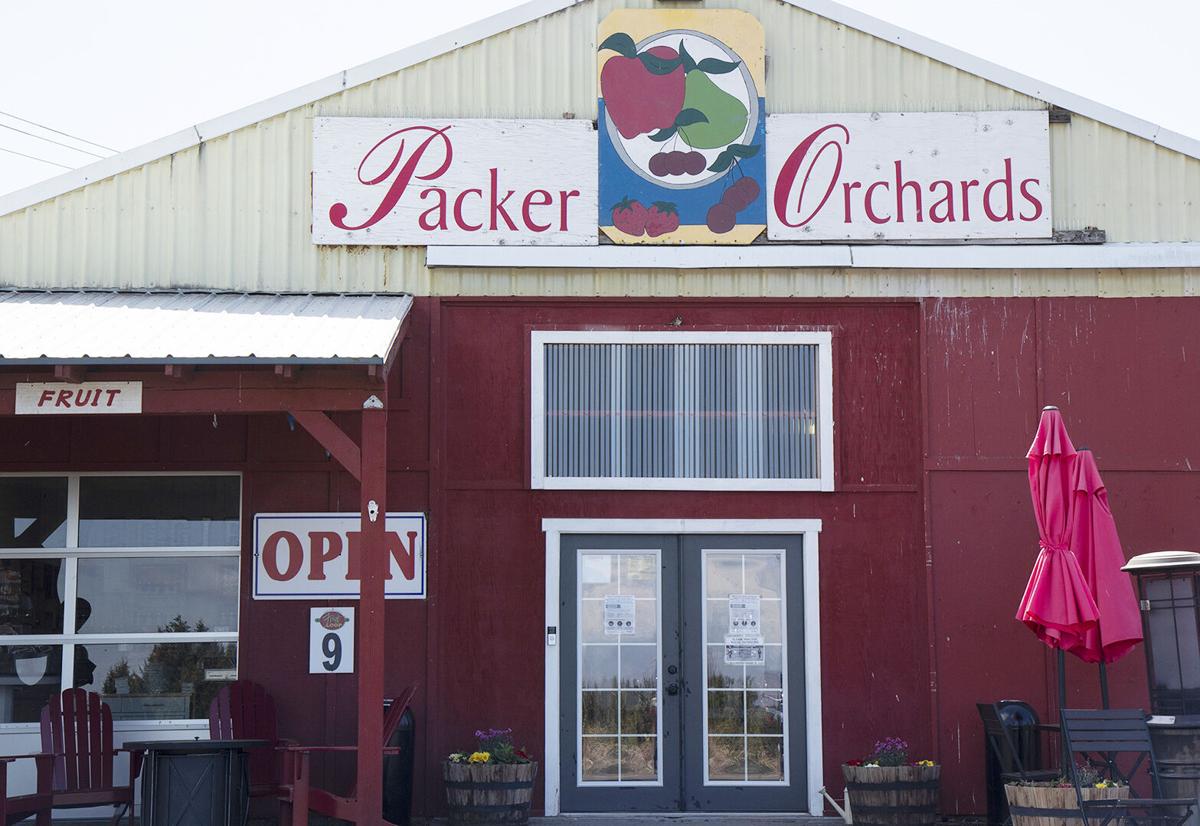 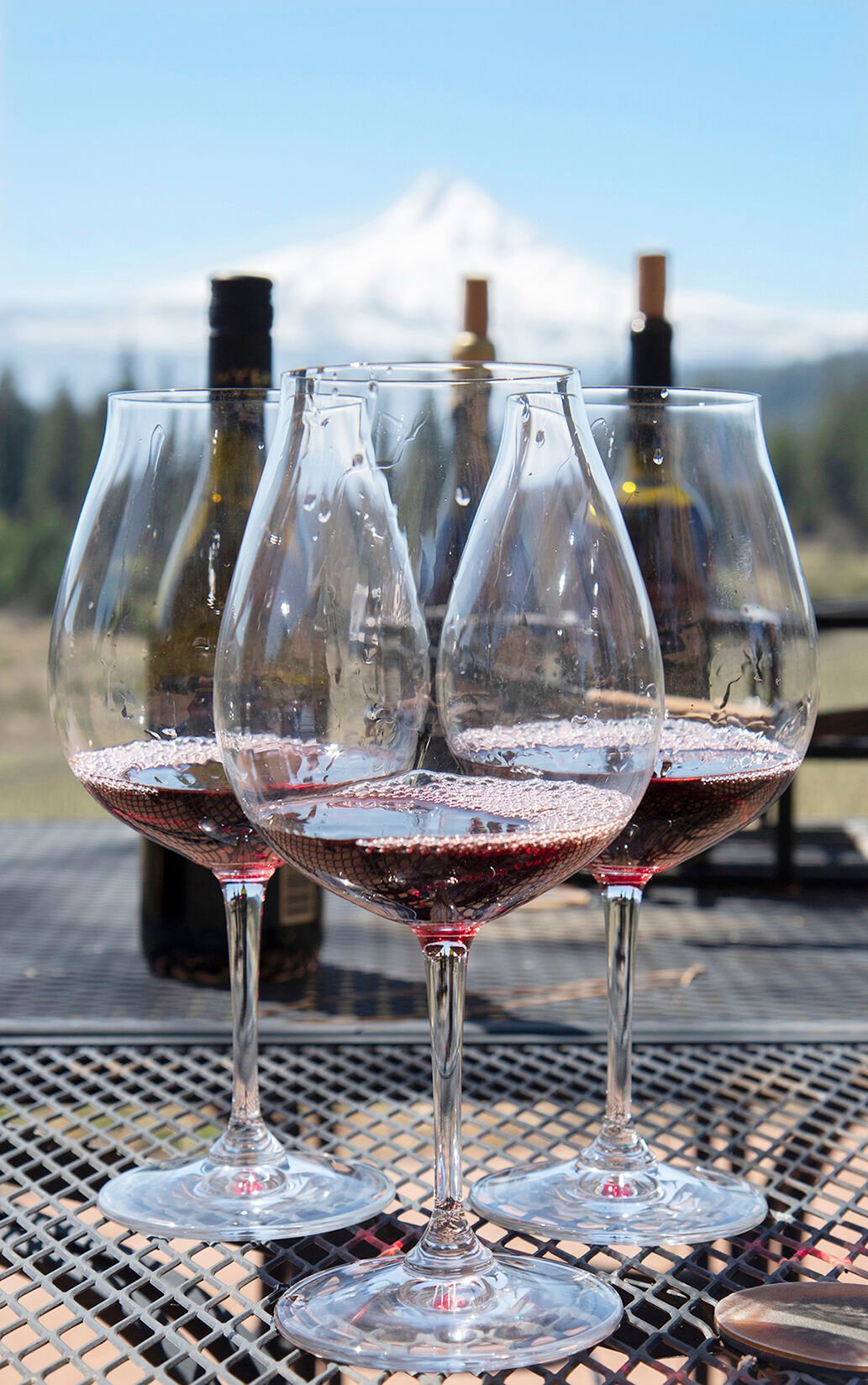 Wine glasses and bottles at Wy’East Vineyards with Mount Hood in the background. 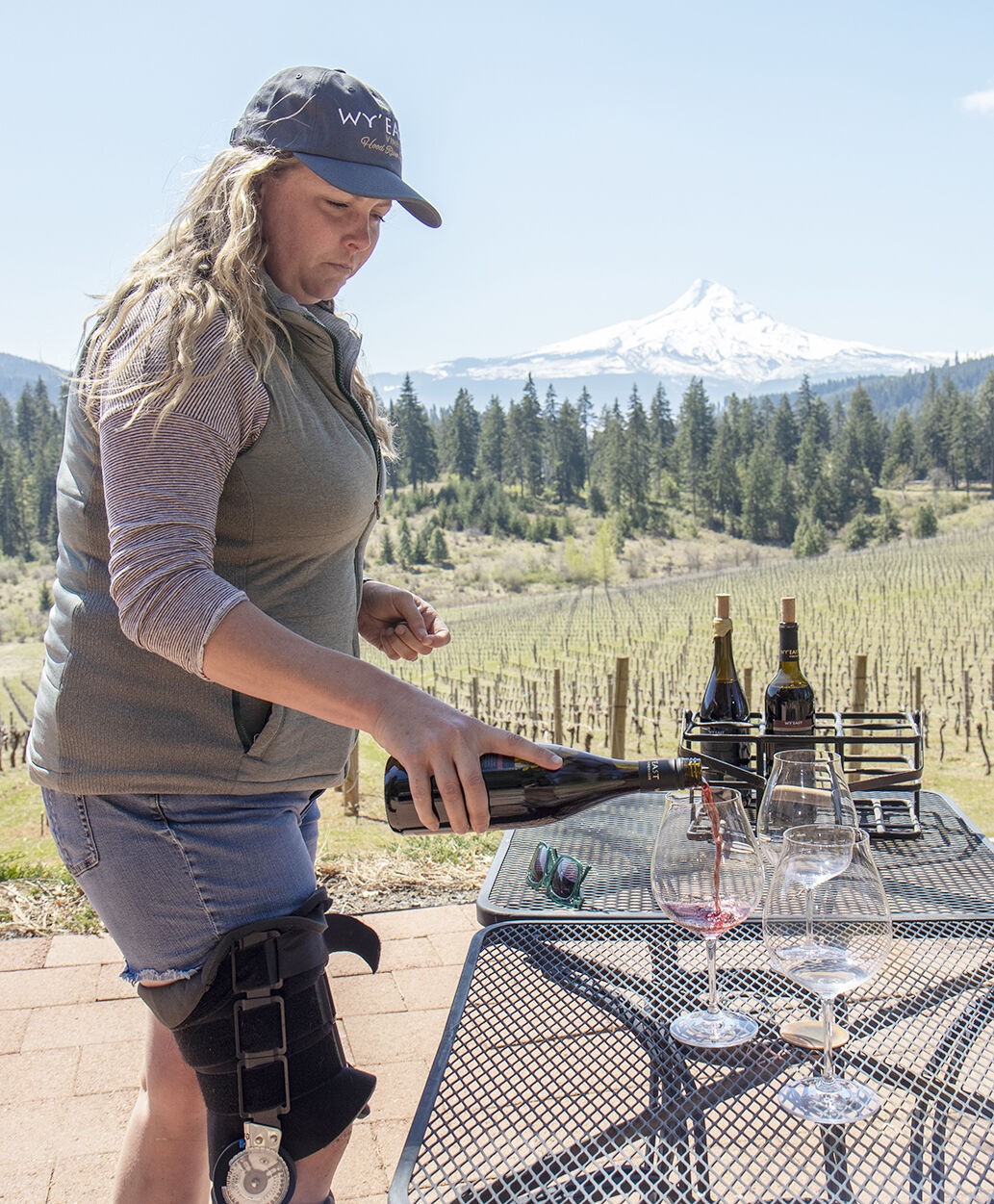 A field of tulips next to a pear orchard in Hood River, Ore.

Mount Adams behind a farm in the Hood River area.

Irrigation systems on a farm near Mount Hood.

Ciders at The Grateful Vineyard created with fruit from the farm.

Called the “Mt. View Orchard Pear” pizza, this pizza is topped with Bosc pears. Trina McAlexander and her family, of Mt. View Orchards, try to use the pears grown on their property in as many recipes as possible.

Trina McAlexander, owner of The Grateful Vineyard and Mt. View Orchards, drives her Gator through an orchard.

Ali Mclaughlin, founder and tour guide at MountNBarrel, rides past farmland with Mount Hood in the background.

HOOD RIVER, Ore. — It was a sunny spring afternoon. The parking lot at Draper Girls Country Farm was packed. Visitors were touring the Hood River Fruit Loop, one of Oregon’s top agritourism destinations.

The Hood River Fruit Loop is named after the cluster of farms growing fruit trees and winegrapes between the Columbia River and majestic Mount Hood. About 30 farms selling fresh produce, flowers, ciders, wines and gourmet foods are part of the official Fruit Loop.

According to the Oregon Tourism Commission, visitors spend more than $100 million annually in Hood River County, and staffers at the Visit Hood River organization estimate tourists spend as much as tens of millions of dollars on the Fruit Loop alone.

When COVID-19 struck last spring, it rattled agritourism ventures across the nation, including along the Fruit Loop. Events were canceled. Couples postponed on-farm weddings. The number of foreign tourists nosedived.

“We all really worked our tail ends off,” said Tammi Packer, a farmer along the loop.

Although some businesses still suffered, especially wineries that were mandated to close tasting rooms, most Fruit Loop farmers say 2020 turned out to be a great year and expect 2021 to be even stronger. Consumer interest in buying direct-from-farm is growing, many say. And agritourism is on the rise.

Farms along the Hood River Fruit Loop have long relied on tourism traffic, so when the pandemic hit, many farmers were afraid a shutdown could destroy them.

For the first few months, the situation looked dismal.

One tourist who visited last April told the Capital Press the Fruit Loop felt like a ghost town.

Ali Mclaughlin is a tour guide and founder of MountNBarrel, a company that takes hundreds of people annually on scenic bike tours between farms along the Fruit Loop. Last spring, she said, nearly every group on her reservation list canceled.

Mclaughlin canceled all remaining tours until June. Tourism picked up over the summer, but at the end of the year, she had made about 80% less revenue than in 2019.

Events that normally support local farmers were canceled, too.

Ashley May, who promotes the loop and was previously executive director of Visit Hood River, a tourism organization, said it was sad to see the Fruit Loop’s two biggest events canceled last year: the spring Cider Fest, which usually brings in 5,000 people, and the weekend Harvest Fest, which draws up to 12,000 people.

The Cider Fest was again canceled this year. A decision has yet to be made about the Harvest Fest.

Revenue loss from those events meant Visit Hood River went from 10 full-time staffers to the equivalent of one-and-a-half staff.

Tourism lodging tax data show the number of overnight guests in the area also dropped — a reduction of almost 100% in spring, and about two-thirds fewer guests than normal during summer.

Hood River winery and vineyard owners, who were required to close tasting rooms several times throughout the year, were especially hard-hit.

The Wy’East Vineyards tasting room is set on a family farm with livestock, farmhouses and pear orchards with a view of Mount Adams to the north.

Mount Hood graces the southern sky, visible from the family’s main vineyard, where vines sprawl across hills about 1,600 feet above sea level — one of Oregon’s highest-elevation vineyards.

Dick and Christie Reed founded the farm in 1992 after shirking city life in Chicago. They, along with daughter Keely Reed Kopetz, now general manager, run the business together.

Fall and winter were especially difficult as wineries statewide rushed to buy tents, outdoor lights and propane heaters when the governor again banned indoor tasting. Reed said her family was fortunate to secure heaters when they were in demand.

“For us, propane heaters were the fall’s version of the toilet paper rush,” said Reed.

As more Oregonians are getting vaccinated and starting to travel again, Reed and Kopetz say they’re seeing visitation pick up. The winery this spring is already bustling.

May, the tourism expert, said hotels are surging with overnight bookings again. And Mclaughlin, the bike tour guide, said her reservation slots are quickly filling — especially for later in the summer.

Tammi Packer, co-owner of Packer Orchards & Bakery, said she’s also seeing traffic pick up. About 150 to 200 people per day visited her bakery in April, and momentum is building.

She represents the third generation on a family farm established in 1915.

During springtime, most of Packer’s sales are through her bakery, which sells value-added goods like jam, honey, pickles and fruit-filled pies. Because pears are Packer’s largest crop, she incorporates pears in nearly every recipe.

In the summer and fall, shoppers also buy seasonal fruits and vegetables from the “farm place” or pick their own in Packer’s U-pick orchards.

“We were thinking, ‘What are we going to do?’ We really had to be innovative. It seemed like every day we had to make a different big decision,” she said.

Packer said sales went better than she could have dreamed. Although fewer international guests were traveling, more people from Pacific Northwest cities visited, eager to get outside and buy directly from farmers.

“I think COVID actually made people more aware of us and what we have,” said Packer.

As she spoke, she worked alongside employees in the bakery kitchen, filling jars with Marionberry jam. The room smelled sweet.

Packer said focusing on the DTC market was economically good for the farm. Packer Orchards sells only 20% of its pears DTC, with the rest going wholesale, but that 20% volume accounts for 60% of the farm’s pear revenue.

This year, Packer said her family plans to continue expanding the DTC and agritourism arms of the business.

“I think it’s going to be an even busier season,” she said.

McAlexander said she’s grateful her farm is part of the Hood River Fruit Loop, so even when the world went into lockdown, people found her farm through the Fruit Loop website and maps.

“The Fruit Loop honestly has been a lifesaver for us,” she said.

When COVID first hit, McAlexander had just opened “The Grateful Vineyard,” an on-farm winery and tasting room. Using the farm’s fruit, McAlexander had created ciders, beers and wines, while her brother had invented gourmet pizzas and salads using farm produce. One popular pizza is topped with Bosc pears, bacon, gorgonzola and caramelized onions.

McAlexander said it was sad to close her indoor dining space immediately after opening it, but she was fortunately able to set up outdoor dining in a meadow facing Mount Hood.

Between outdoor visitors to The Grateful Vineyard and farm-direct sales at her farmstand, McAlexander said she saw “no dip in sales” during 2020.

COVID did prompt her to cancel some activities, like hay rides. And many couples who planned to rent the farm space for weddings postponed. The wedding cancellations were hard, McAlexander said, because she uses those revenues to pay for farm inputs, including chemicals and labor expenses.

But 2021, according to McAlexander and other farmers who talked to the Capital Press, is shaping up to be “the year of weddings.”

Like Tammi Packer, McAlexander said the best profit margins come from the DTC market, so she plans to keep expanding her farmstand, food and beverage options and agritourism activities.

“People just really seemed to rally for American farmers,” she said. “That just melted us last year. I almost want to cry about it. We were growing crops and wondering, ‘Are people going to come and support us farmers?’ And the resounding answer was ‘Yes.’”

Farmers, industry experts and community leaders say the Hood River Fruit Loop is just one example of how agritourism is growing in the Pacific Northwest — both before and during the COVID pandemic.

Just a decade ago, wine experts say, the Hood River Valley had only a few vineyards. Today, the region is home to dozens of major vineyards and wineries.

New farms are joining the Fruit Loop each year, including the first meat-only farm in 2021.

Farmers are creating product lines and inventing new on-farm activities. Packer, for example, is in the permitting process for a teaching kitchen, where visitors can take cooking classes.

The pandemic has been hard, but many Fruit Loop farmers say it pushed them to new heights.

“The Fruit Loop is seeing a huge increase in growth, and agritourism seems to be on the rise in general,” said Packer. “I’m excited for what the future holds.”