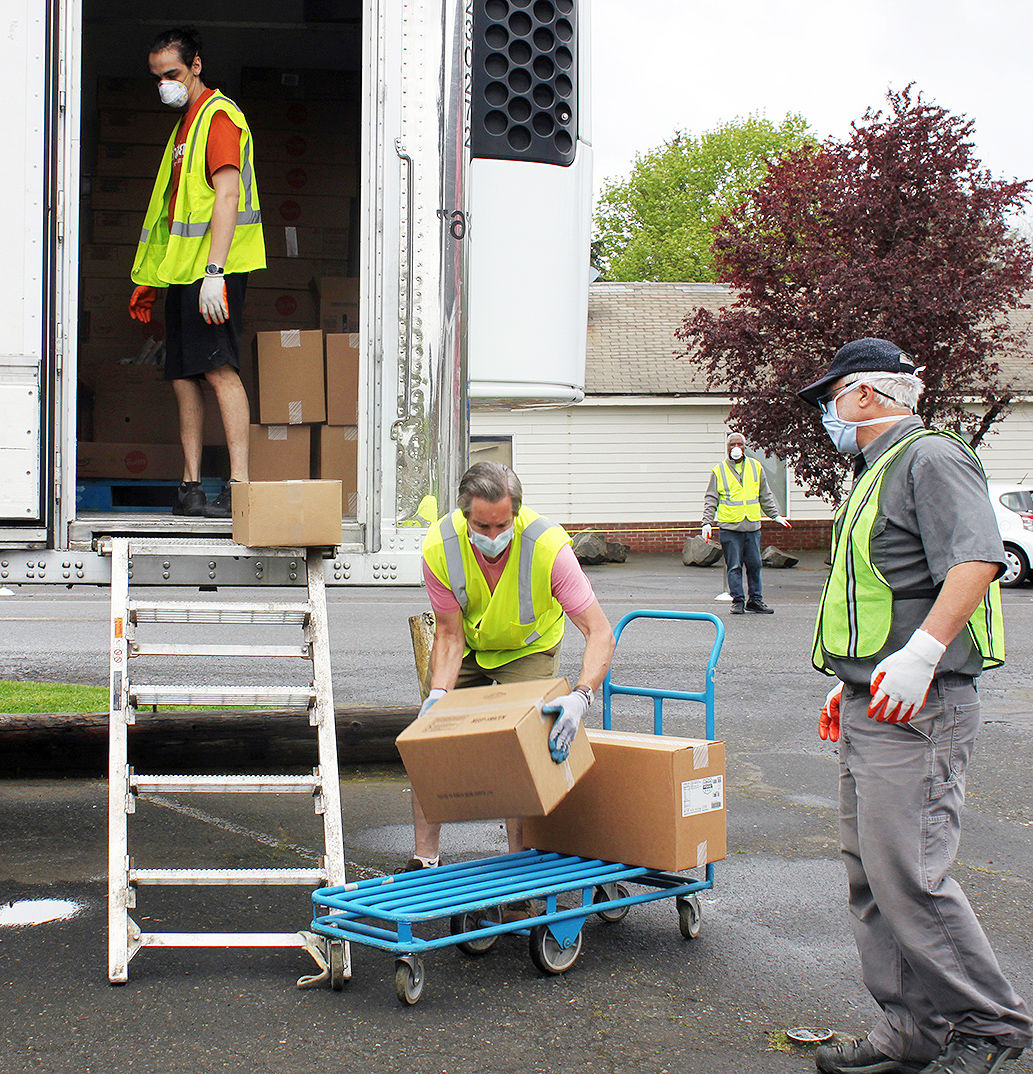 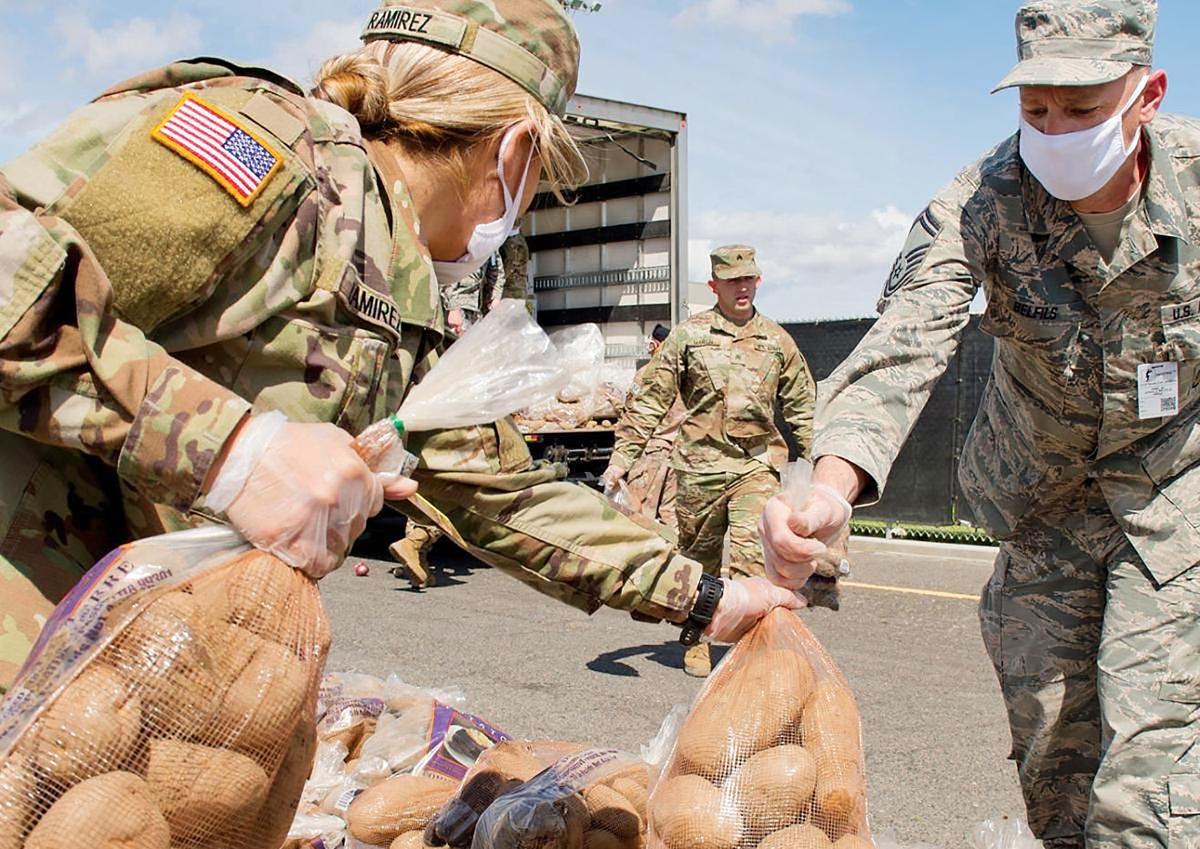 Volunteers at Second Harvest gather bags of potatoes to give to hungry families in Washington state. 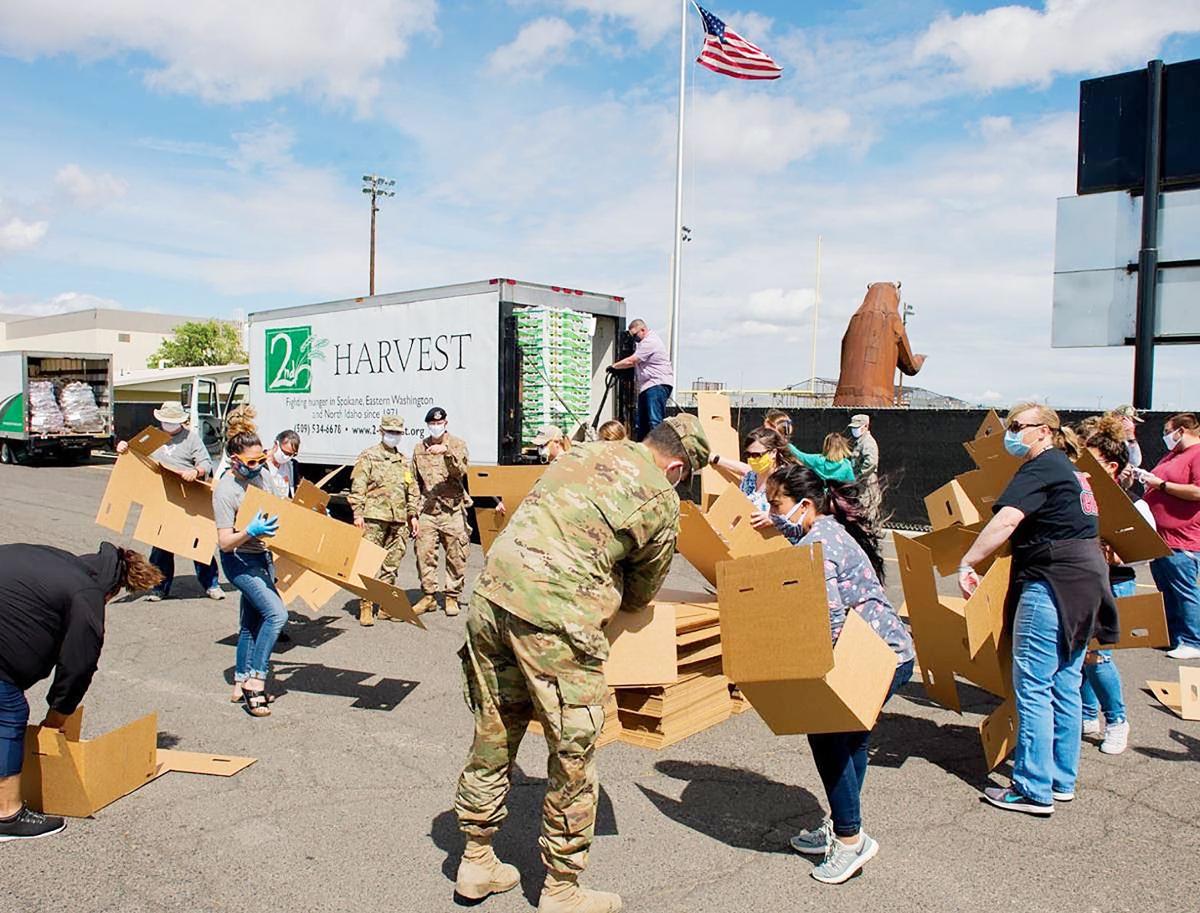 Volunteers at Second Harvest gather bags of potatoes to give to hungry families in Washington state.

In the West and across the U.S., mass distribution of food boxes began Monday and will continue in approximately six-week segments through December.

In the first batch, food distributors with federal contracts are teaming up with producers and nonprofits to give away more than 900,000 food boxes — some stuffed with dairy products or meat, others with fruits and vegetables and some with a mix — to people in need during the next six weeks.

The campaign, called the Farmers to Families Food Box Program, is one slice of the CARES Act. Congress passed the $3 billion program this spring to help ease farm surpluses, bring employees back to work and fight hunger during the pandemic. Although some people have criticized the program, industry experts say it will have an overall positive impact on agriculture, business and communities.

"There's all this excess food from school and restaurant closures, and simultaneously the highest level of hunger since the Great Depression. I love that this program is aimed at solving both problems," said Susannah Morgan, CEO of the Oregon Food Bank.

The USDA, tasked with using the $3 billion to buy farm products, chose distributors to contract with this month and awarded the first $1.2 billion. A USDA spokesman told the Capital Press the agency received over 550 proposals. About 200 were selected.

Each month, the USDA's Agricultural Marketing Service will buy $100 million each of fresh produce, dairy and meat from distributors.

The boxes are being packed as many food banks are experiencing swelling demand.

The boxes are coming at the right moment for people in crisis, said Ferschweiler. Food pantry lines are long. Phone calls from people in need are up 400% from 2019. Ferschweiler wrote $10,000 in rent relief checks to Portlanders in a single day.

"This program is great for food banks, because we've got nutritious food to feed people," said Wieber. "It's also a huge win for the farm and food industries. The distributors that got these bids are super excited."

The federal government's ambitious June 30 deadline for the first segment has contractors, including Pacific Coast Fruit, racing to meet quotas.

The USDA, Nemarnik said, gave Pacific Coast Fruit just one week to get boxes and inventory, gather and train a crew, find truck drivers, contact growers and partner with nonprofits. The company is contracted to fill 135,000 boxes a week.

"It was kind of a mad scramble," he said. "I was on site Saturday, and I was amazed. Boxes were just flying out there."

Because of the project's enormous scope, Pacific Coast Fruit invited one of its competitors, Charlie's Produce in Clackamas, Ore., to handle one-third of the orders. The company also invited Medosweet Farms, a Seattle-based dairy distributor, to put together dairy and combination boxes.

Despite the fast pace, Nemarnik said the contract has been a gift. He said the company recently had to furlough 78 workers, and the money brought back most of them. The award also supports Pacific Coast Fruit's local growers, he said.

Morgan of the Oregon Food Bank said Pacific Coast Fruit, a long-time donor and partner, is well-deserving of the contract.

Even so, Morgan said she is grateful for the free, high-quality food at a time when the Oregon Food Bank has been spending $1 million weekly to feed hungry Oregonians.

Despite the program's successes, its initial round of funding generated controversy.

Some farmers and distributors criticized the USDA for awarding contractors that did not appear to have a food or agricultural background.

One award for $12.2 million went to a small California company selling organic hand sanitizers. Another, for $39.9 million, went to a wedding and event-planning company in San Antonio, Texas. The USDA also awarded a $12.2 million contract to Travel Well Holdings LLC, a California-based travel company.

Holtz said his company was "not set up for that scale" when he got news of the contract, but would likely be ready for shipments soon.

"Some of these companies had no business getting (contracts)," said Mac Riggan, marketing director at Chelan Fresh in Chelan, Wash., one of the approved contractors. "The avocado guy's contract just tipped him over. He couldn't handle it."

Tom Stenzel, president of the United Fresh Produce Association, a food distributor that was denied a contract, wrote a letter May 11 to the administrator of the Agricultural Marketing Service raising questions about the bidding process and requesting transparency.

A USDA spokesman told the Capital Press applicants had to meet evaluation criteria, and each proposal was "carefully reviewed by a team of contracting and technical experts."

Gail Greenman, director of national affairs at the Oregon Farm Bureau, said the USDA may have made some mistakes in their contract choices much like the Small Business Administration granted Paycheck Protection Program loans to some unqualified companies.

Criticism may be legitimate, Greenman said, but it's no reason to disparage the agency or the entire program. The USDA had to make tough decisions at break-neck speed, she said, and the food box program is making huge strides to support producers, distributors and hungry families.

"This program is doing good stuff for agriculture," said Greenman. "And families are getting fresh food — kind of a farm in a box."